The mass cancelation of the well-loved Christmas pantomime this year is a heavy financial blow to British theaters, but what exactly is “panto?”

“So, you know what Brexit is? And you remember what metaphors are…?” There was something of a cultural exchange going on as I drove my nephews back from the pantomime last year. I explained the less risqué adult jokes while they filled me in on the correct moves to the Baby Shark Song. Back home, the eight-year-old and I rehearsed a skit from the show. I gave him a mock push, he fell over, then complained he’d need a new bottom: “this one has a crack in it!” Pure panto.

Pantomimes, or “pantos” as they’re affectionately called, are a uniquely British family entertainment retelling folk and fairy tales in a comedy-musical with slapstick, drag, innuendos, and audience participation. In their present format, they are over a century old but their origins date back further still. For many theaters across the U.K., they are vital. Sales for these well-loved shows, traditionally staged around Christmas, can support less commercial productions throughout the year.

With coronavirus social-distancing rules making large casts and viable audience numbers an impossibility, it became obvious by late summer that “panto season” would not be happening this year. It was a heavy blow.
Theatres had not been allowed to open at all between March and mid-August. Even before the country locked down again in November, theaters knew that their cash cow had effectively been slaughtered. 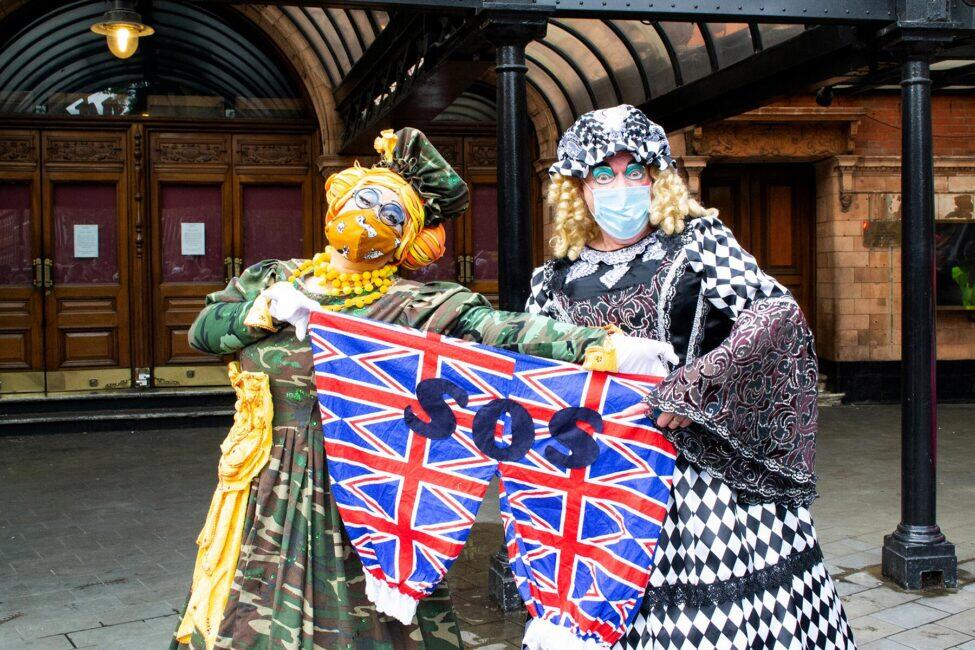 Arts & Culture Sanskrita Bharadwaj Who's Behind These Giant Stone Carvings?
Continue Reading Article After Our Video

Michael Batchelor has been a professional pantomime dame (the shows’ central comic drag character) for 20 years. He also writes and choreographs pantos and makes elaborate costumes and wigs for specialists Evolution Productions. “For theaters, panto is their longest-running show. It runs four, five, or six weeks,” he says. According to Batchelor, theaters are often at 98% capacity during panto season. “That’s a lot of revenue and it’s not just ticket sales–there’s a lot of merchandising on top of that and there are drinks from the bar, and people are more likely to eat in the theater restaurant around Christmas.”

Panto 101Drag: Always the best-loved character, the panto dame, played by a middle-aged man in drag, is usually a fun-loving, matronly caricature with grotesque makeup and a series of over-the-top dresses, hats, and wigs, often themed to certain scenes. Conversely, a woman sometimes plays the young male lead or “principal boy.”

The typical panto audience is multi-generational, so 12-strong family bookings are not uncommon. Its format is designed to keep this demographic. “If panto is just for children, it’s not a panto,” says Batchelor. “If it’s done properly, the kids have the singing, the silly jokes, and the slapstick. And for adults, the innuendo is so important.”

Pantomime is also an important gateway to the arts. For many children, it’s the first live performance they’ll see. For adults, these accessible shows can be a prompt to book others. “It’s almost trying to get people hooked on wanting to come to the theater,” Batchelor explains.

Panto 101Audience Participation: Lead characters talk directly to the audience, encouraging their help, organizing sing-a-longs, and throwing sweets. Actors will initiate arguments with the audience by feeding them lines to which they can call the traditional reply, “oh no it isn’t!” or “oh no you won’t!”

This September regular dames donned their best wigs and dresses to lead creative industry workers in a march on parliament dubbed the Panto Parade. They called for more government action to support the arts through the COVID-19 crisis.

Cultural Recovery Fund grants were welcomed in October while subsidies raised through the National Lottery are helping some theaters to plan socially-distanced pantos this Christmas, with over half their seats empty. But around 186 theaters that would usually stage a pantomime–an estimated 75% of the total–will not be doing so this year. The shows that are going ahead will have vastly-reduced casts and box office earnings. 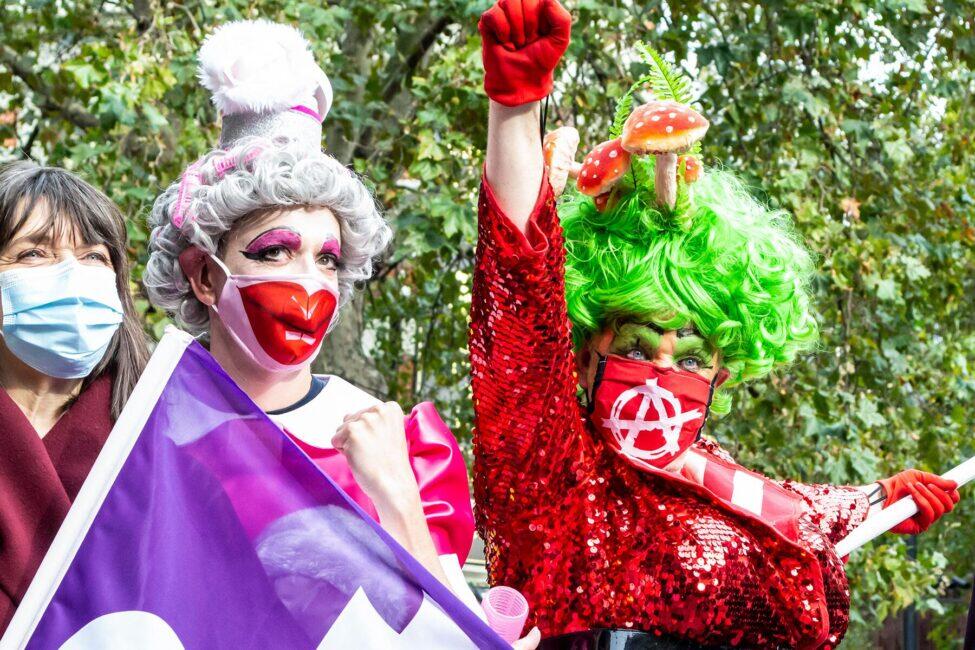 “It’s never going to fill the gaps for the months theaters were closed,” says Batchelor. “There are so many people for whom panto is part of their Christmas. If they don’t go and join in together and have fun there’s something missing.”

Panto 101Double Entendre: Amid the multiple cheesy jokes and puns for the wider audience will be knowing asides for the adults, usually mild sexual innuendos—“It’s past midnight and still no sign of Dick…” Satirical political references are also common—“I’ll be wearing my Brexit dress to the ball. It looks lovely in the box but when you take it out, you can see right through it.”

The enduring appeal of pantomimes to the British public is perhaps surprising. The shows descended from 16th-century silent Italian street theater, commedia dell’arte, and in their English form first featured an impish Harlequin who carried a “slapstick” to magically change scenery. In the late 19th century, they became lavish, riotous productions incorporating elements of popular music hall variety shows. Continued evolution has helped them endure. Nowadays, shows will feature soap stars and topical jokes and have LED screen special effects.

Panto 101Slapstick Scenes: A set piece slapstick scene with the comic leads will generally involve something messy like baking a cake. If a pantomime horse or cow is involved, this will comprise two actors in an animal suit.

“Some people say pantomime is lowbrow but if a theater can run it for four-to-six weeks to make them a lot of money to be able to put on more niche shows, I don’t understand that thinking,” Batchelor says. “It’s very important to keeping theaters going.”

Panto 101The Ghost Scene: At some point, the heroes will find themselves somewhere spooky, rest on a bench, and ask the audience to warn them if a ghost shows up. As the kids scream the famous line, “It’s behind you!” one by one the characters encounter the ghost and flee until the phantom comes face to face with the dame and runs off in fright.

Indeed the humble panto has had some unlikely highbrow champions. In his sixties, Sir Ian McKellen, better known for his Shakespearean leads, fulfilled a career ambition by playing dame Widow Twankey in a pantomime performance of Aladdin at London’s Old Vic. This Christmas, in an act of solidarity with struggling arts venues across the land, the National Theatre is mounting only the second pantomime in its history before a socially-distanced, masked audience. “Pantomime is an essential part of the living fabric of our nation,” says the theater’s director, Rufus Norris. “We’ll do all we can to keep the flame alive.”