In a country full of beauty, this is one you shouldn't miss.

On a holiday in Croatia, my friend Jelena suggested a quick unplanned visit to a cemetery in Zagreb one evening. In Croatia’s capital city, there is no lack of attractions—from the majestic Cathedral to the quirky Museum of Broken Relationships, there is something for everyone. Why was she taking me to a cemetery then? But I did not fret for long, because Jelena is a local and a veteran in the travel business, and I was sure it would be something special.

As it turned out, Mirogoj (pronounced “mir-uh-goy”) is more than just a cemetery—it is an urban park, a tree-lined garden filled with elegant cupolas, tiled arcades, and, of course, impressive tombstones. With its grand green domes and ivy-covered walls, Mirogoj looks more like a museum or even a palace from the outside than a resting place for the deceased. It is located just outside the main city, on the lower slopes of Medvednica mountain.

When we entered Mirogoj just before sunset, there were only a few solitary walkers, and the entire place was cloaked in a golden silence. We could hear the loud chatter of birds winding up their day and the summer breeze rustling through the trees. Other than that, Mirogoj was, just as Jelena had promised, peaceful and beautiful. Once inside, it was still initially tough to not think of it as just a pleasant stroll in the garden, but as we walked along, the graves and tombstones came into sobering view. 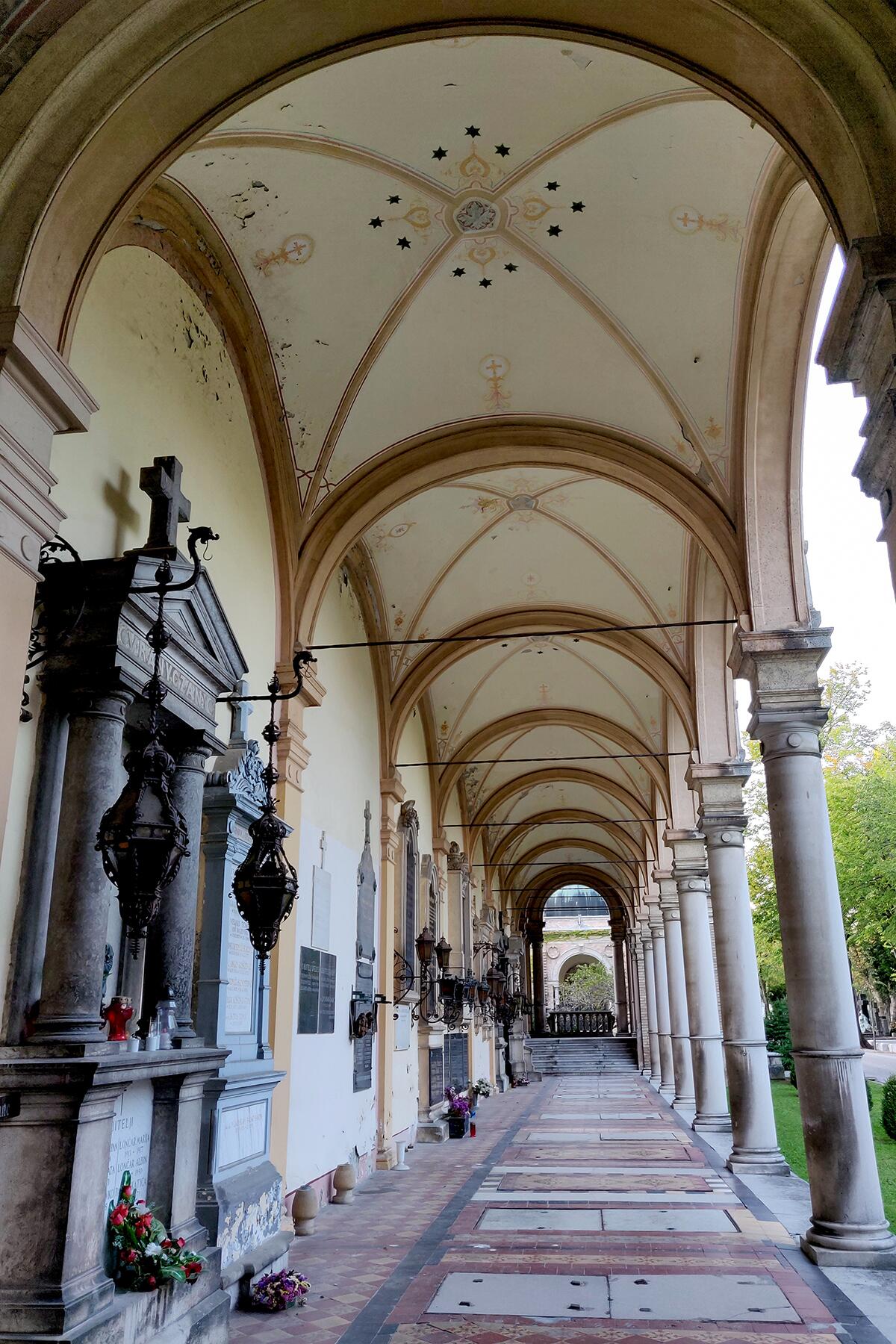 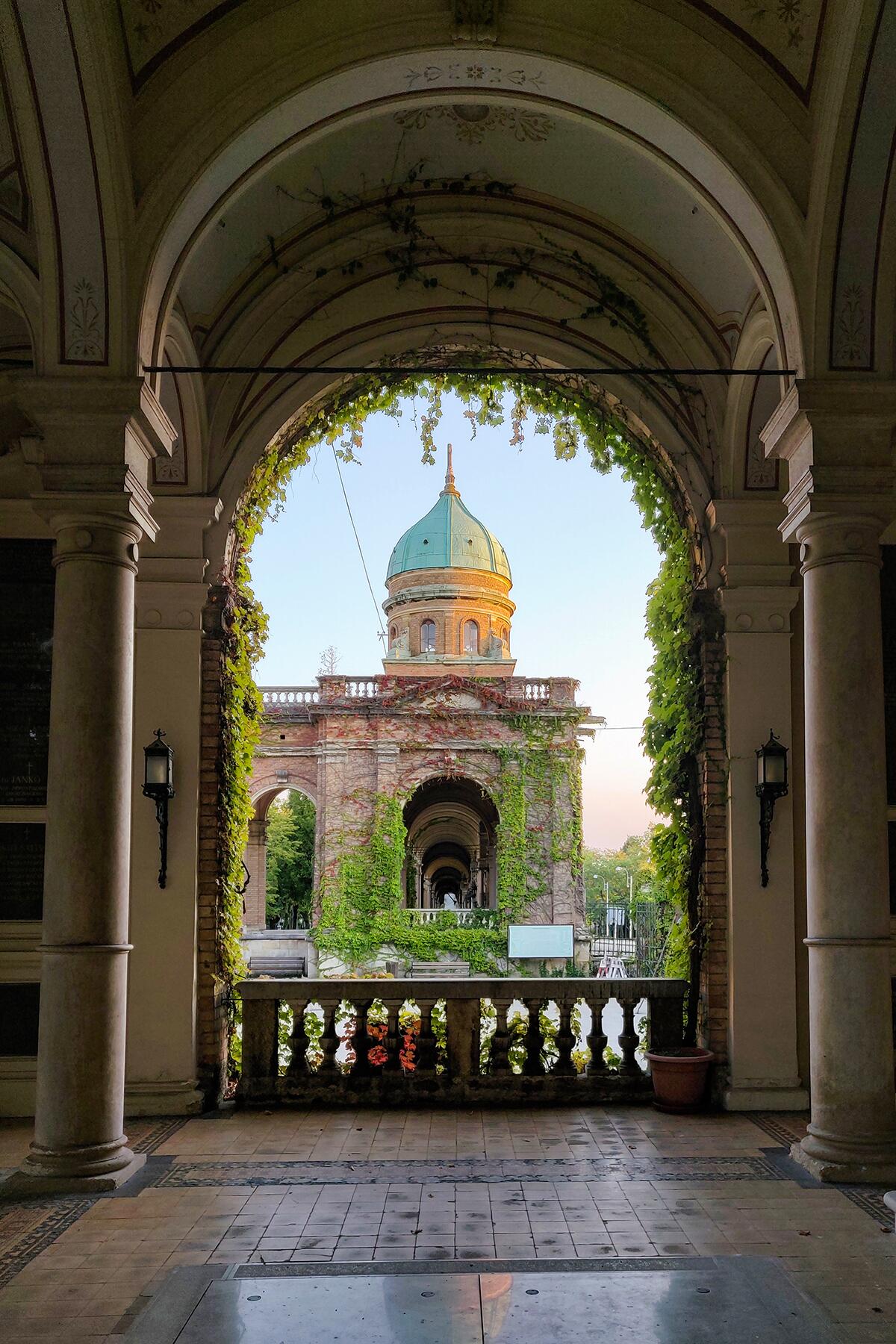 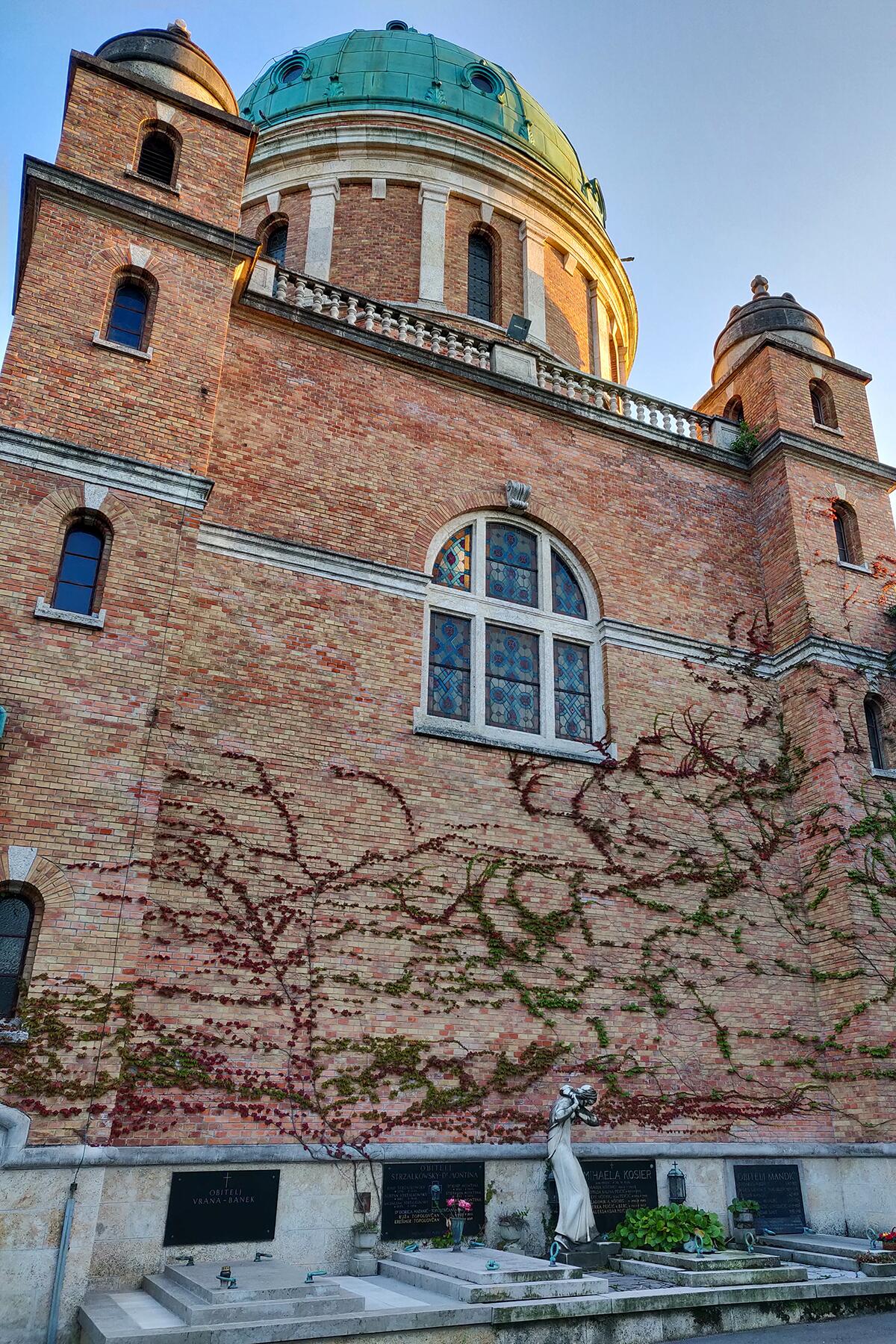 Mirogoj has a long and interesting history, starting in the late 19th century when Croatian politician and writer Ljedevit Gaj bought the land to build a lavish home. This pet project of a summer residence with park grounds was enough to put him into deep debt. When it was auctioned off after his death in 1872, it was bought by the city of Zagreb to find space for a new cemetery. As an interesting aside, I learned that the city gave the cemetery’s first customer, physical education teacher Friedrich Singer, a magnificent service when it opened in 1876.

Surprisingly for its time, Mirogoj offered a place for people of all faiths; Catholics, Protestants, Orthodox Christians, and Jews are buried here in their own sections, and there is also space for the non-religious. As I walked through the tree-lined paths, I came across graves marked by the Christian cross and sculptures of Jesus the savior, the star of David with Hebrew inscriptions, and even some Islamic epitaphs—all of it reflective of the region’s history, when Croatia was part of the unified, multicultural country of Yugoslavia.

As Jelena said to me, “Ordinary Croatians are buried next to prominent personalities here in Mirogoj. There are people from Austria and Hungary as well as people from other Yugoslavian regions. Being in Mirogoj takes you back in time and gives you an idea of how Croatia is still strongly connected to its past.” From poets to politicians, sportsmen to actors, and war heroes, Croatia’s most influential and renowned people rest at the Mirogoj Cemetery. These include Croatia’s first president Franjo Tudjman and writer August Senoa, to more recently, actress Ena Bejović and mayor Milan Bandić.

Not satisfied with planting copious rows of chestnut, maple, and spruce trees to make it a green space, the town administration invited Austro-Hungarian architect Herman Bollé to embellish it further. Bollé was working in Zagreb then, and is also responsible for the renovation of both the Zagreb Cathedral and St Marks Church. From 1879 to1917, he created the magnificent north and south arcades with 20 domes, all built in the Neo-Renaissance style. Incidentally, Bollé’s own grave is in Mirogoj, with his memory marked by his bust.

The tiled arcades are an attraction in themselves, and the painted ceilings of the massive domes are reminiscent of Europe’s grand cathedrals. The common spaces and even some of the graves are decorated with stunning sculptures and headstones by Croatian artists, including Ivan Meštrović, Antun Augustinčić, and Edo Murtić. There are sculptures of cheeky cherubs and mourning women, while others detail the occupation of the deceased; I saw fighter pilots and footballers, among the lot.

Mirogoj Cemetery comes alive on November 1 each year, marked as All Souls’ Day, when locals visit to pay their respects to the dead with flowers and candles. On our drive to Mirogoj, Jelena had rightly described it as an open-air cultural museum. As I discovered, Mirogoj is indeed a celebration of art, architecture, and life itself.