Most people try to forget their drunken mishaps, but in Zagreb, these stories are immortalized within a museum's walls.

was not attempting to be ironic when I arrived at Zagreb’s Museum of Hangovers with a hangover, but my story definitely wouldn’t cut it at the museum.

The Museum of Hangovers (Muzej Mamurluka), which officially opened in Zagreb in 2019 near the bar where the idea was initially conceived, subsequently spawned pop-ups in the Croatian city of Split and the island of Hvar in the summer of 2021. Rino Duboković, the museum’s 26-year-old founder and CEO, is ambitious about expansion. Inspired by the success stories from the Museum of Illusions, a pioneering project in Zagreb that now boasts 35 locations around the world, and Zagreb’s Museum of Broken Relationships, which has a permanent outpost in Los Angeles.

Featuring 40 to 50 rotating stories, the path through the Museum of Hangovers is meant to mimic walking drunk through five rooms. The museum features objects and photos, plus interactive exhibits such as “Drunk TV” and a drunk driving simulator. You end up in the “Toilet God” room (“On Sunday, some people go to church, and others are hugging the toilet,” Duboković joked), and finally, you stumble upstairs to the bedroom to sleep it off.

“In our future museum, we plan to have 10+ rooms representing walking home drunk, from the bar to the room where you wake up with educational messages at the end. It will also be like experiencing a drunk night without drinking a sip of alcohol,” explains Duboković. Duboković plans to open a franchise in Shanghai featuring international hangover stories and interactive exhibits, and eventually plans to open in the States.

At the museum’s gift shop, I was tempted to assuage my aforementioned hangover with a “hair of the dog” shot—via a small bottle of rakija, a strong local spirit labeled as a “magic potion.” In Croatia, this high alcohol spirit is said to cure everything. Despite its reputation as a hangover cure, I resisted and silently suffered in my hangover prison instead.

To kick off my museum experience, Duboković gave me blurry “drunk goggles” and instructed me to throw a dart at a dartboard for the chance to gain free entrance. Instead of hitting the bullseye, I missed the board entirely. It’s unclear whether my bad aim resulted from the drunk goggles, hangover, lack of dart-throwing abilities, or all three.

A few particularly insane–and disturbing–hangover stories popped out at me as we explored the museum. 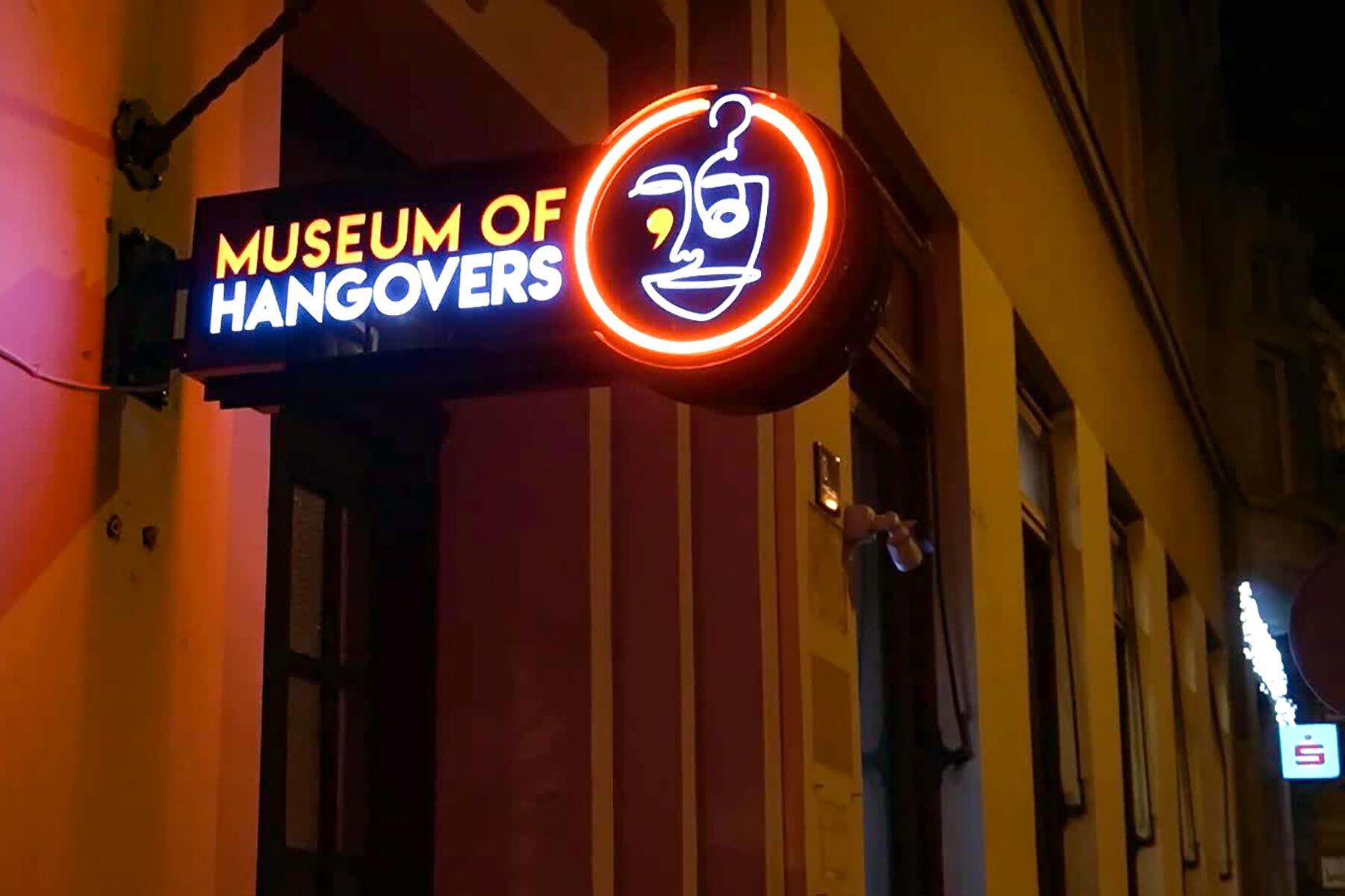 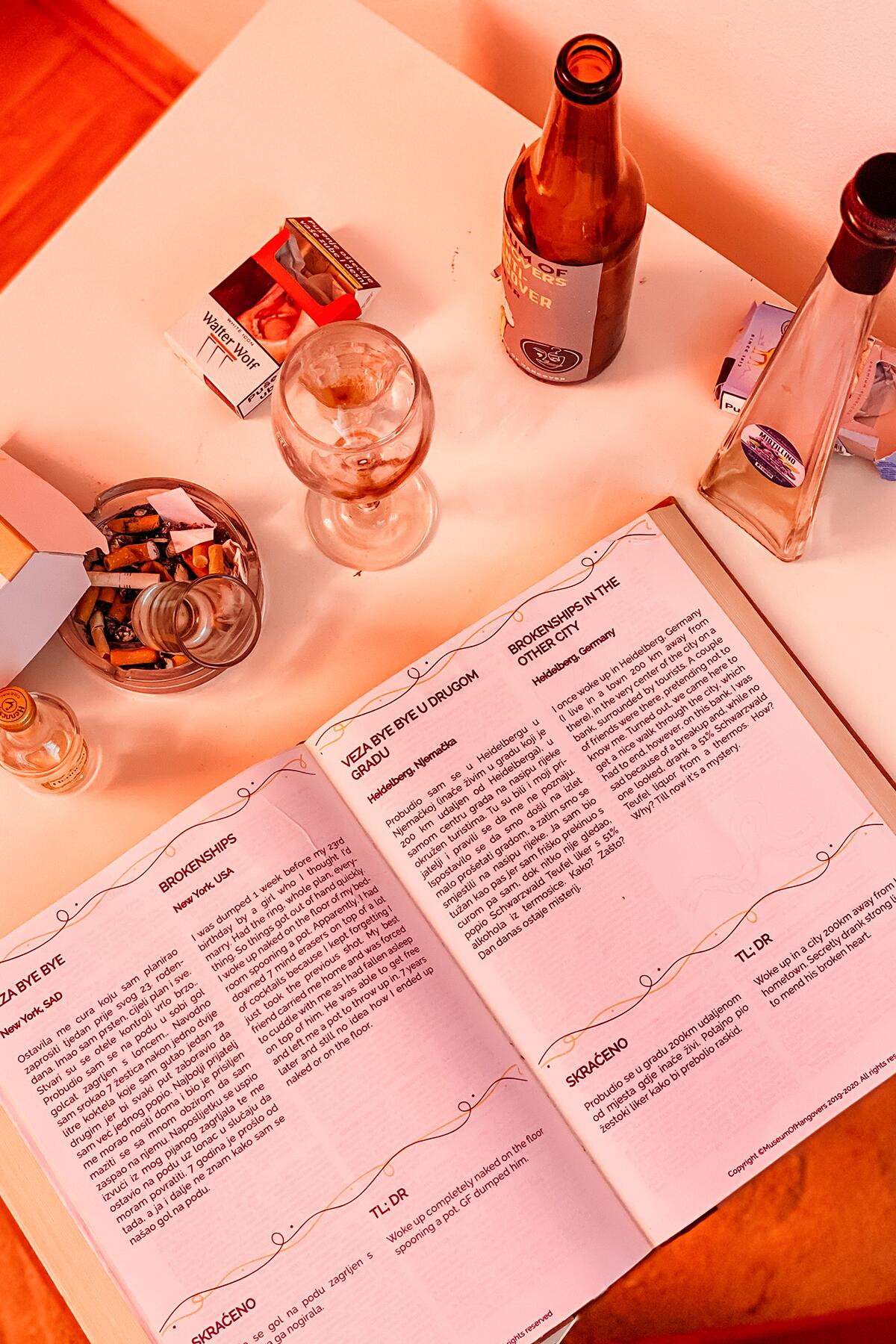 It Began With a Bicycle Pedal: Croatia

“After having a blast at a Beerfest, my friends and I went for one more drink to a bar next to where this museum is today. As we talked about funny stuff that was mostly drunk stories, my friend told us a story about how he recently woke up with this bike pedal in his pocket. Apparently, his friend was driving his bike when he drunkenly smashed into a pier, broke a pedal, and fell down on tram rails. Luckily there was no tram passing by at that moment. As he was telling his story, I thought of a great idea—a place of some sort of collection where all these objects from drunk stories would be exposed together with their stories. And that is when the idea for the Hangover Museum was born and came to life six months later.”

“One day, two friends and I decided to go on a trip to the Pelješac Peninsula. Of course, we brought homemade wine and ice along the way. And so, we drank and enjoyed the ride. Soon, it got dark, and we were still driving and looking for a place to sleep. Visibly drunk and stupid, we missed the road but kept driving on. There were signs on the road for ‘ferry, ferry.’ We thought there must be a port branch, and we continued to drive down the road. At one point, we were in the air, and the sea was in front of us. We only realized we had landed in the port waters once the sea started flooding the car. Luckily, we all managed to get out of the car before it sank in the middle of the harbor. Luckily, there were fishermen who gave us their mobiles so we could call someone to come for us. Also, divers with towing services came and pulled out the car. What can I say? God protects fools.”

“I was in the state of Virginia when my visa expired. There, I met the cutest guy on Tinder. For the third date, he invited me to Washington D.C. Nervous about getting deported, I told him that I’m an immigrant and we should avoid the police. The only answer I got was his smile. We had many drinks, and while asking about his job, I got so many answers, so I thought I was just too drunk to understand what he actually does for a living. As we were getting back to the hotel with a whole bottle of tequila, I asked again what he does for a living and finally got an answer: ‘I’m the guy who deports immigrants out of the country.’ Immediately I sobered up. I was lucky he liked me and promised not to deport me. I don’t remember much after finishing the bottle. The next memory was me standing in the hotel hallway naked, not even wearing underwear. I had no idea which room I came from, and who I even came there with. I found a phone on the wall and called the reception. I needed to think quickly about how to cover myself and found a trash can. I took out the bag (it wasn’t even black, it was CLEAR) and covered myself. Girls came up, shocked to see me like that, and one ran down to get clothes from the lost and found. The other asked me: whose name the room was registered to. I said his name from Tinder, but they needed a last name. Eventually, we all figured it all out. We knocked on the room door, and when the guy opened the door, he just looked at me and said, laughing, ‘I’m not gonna even ask!’”

“Since I never drink, I’ll tell a story that happened to my grandpa. Like in any good story, a guy (my grandpa) walks into a bar and gets so hammered he winds up in the church, where he soon collapses. As the case may be, he feels at home or close to God, so he falls asleep on a bench. Some time has passed when he wakes up to creepy murmuring. It turns out he woke up in the middle of a Sunday mass. The only thing he can do now is get up and act as though he was praying with them the entire time. When the mass ended, he went home completely enlightened. Needless to say, I LOL’d when I first heard this story.”

“Back in 2014, I was just 18 years old, and I went abroad with a group of friends for the first time. We went to Zrće, and the first night was already an absolute mess. We drank so much vodka. I remember coming back to Novalja, a town near Zrće, where we were staying, alone and completely wasted. I took a shortcut through the forest, where I fell and hurt my knees to the point I was bleeding. When I found the road, someone showed me the way to Novajla since I was going in the wrong direction. When I woke up in the morning, my roommate told me to look at my legs. I was like, ‘OK, you know, I fell yesterday, and it’s just a little bit of blood, nothing too bad, don’t worry, I’m fine.’ He said this was not the point of his remark and that I should see my thigh. There was a tattoo, a real one, and what a tattoo it was. On my thigh was Wile E. Coyote from Looney Tunes holding up a sign that read ‘Help!’ That’s how I got my first tattoo ever. I had no regrets at all; it’s still on my thigh, and I love it. It’s part of me now, and it’s always a fun story to tell to my friends.”