Tiny St. Martin is full of hidden gems: secret beaches, picturesque tide pools, and some of the best food in the Caribbean.

At a scant 13.4 kilometers from tip to tail, it’s hard to imagine that tiny Saint Martin/Sint Maarten holds too many secrets. The twice named, bi-national island (it’s half French, half-Dutch) might be pint-sized, but what it lacks in landmass it makes up for with its pristine beaches, coral reefs, dramatic volcanic topography, alongside a treasure trove of hidden gems. Saint Martin is best-known for Maho Beach, a sandy strip at the back of the island airport where tourists famously selfie themselves being sandblasted as jets take off from the oh-so-short runway. And while visiting Maho is a—literal—blast, there’s more to SXM than its top beaches. SXM is full of surprises including picturesque tide pools, phenomenal French cheeses at bargain prices and some seriously friendly parrots (as well as some not-so-personable iguanas). There are even a few secret beaches away from the throngs of tourists, too. Here are 11 of the island’s best-kept secrets. 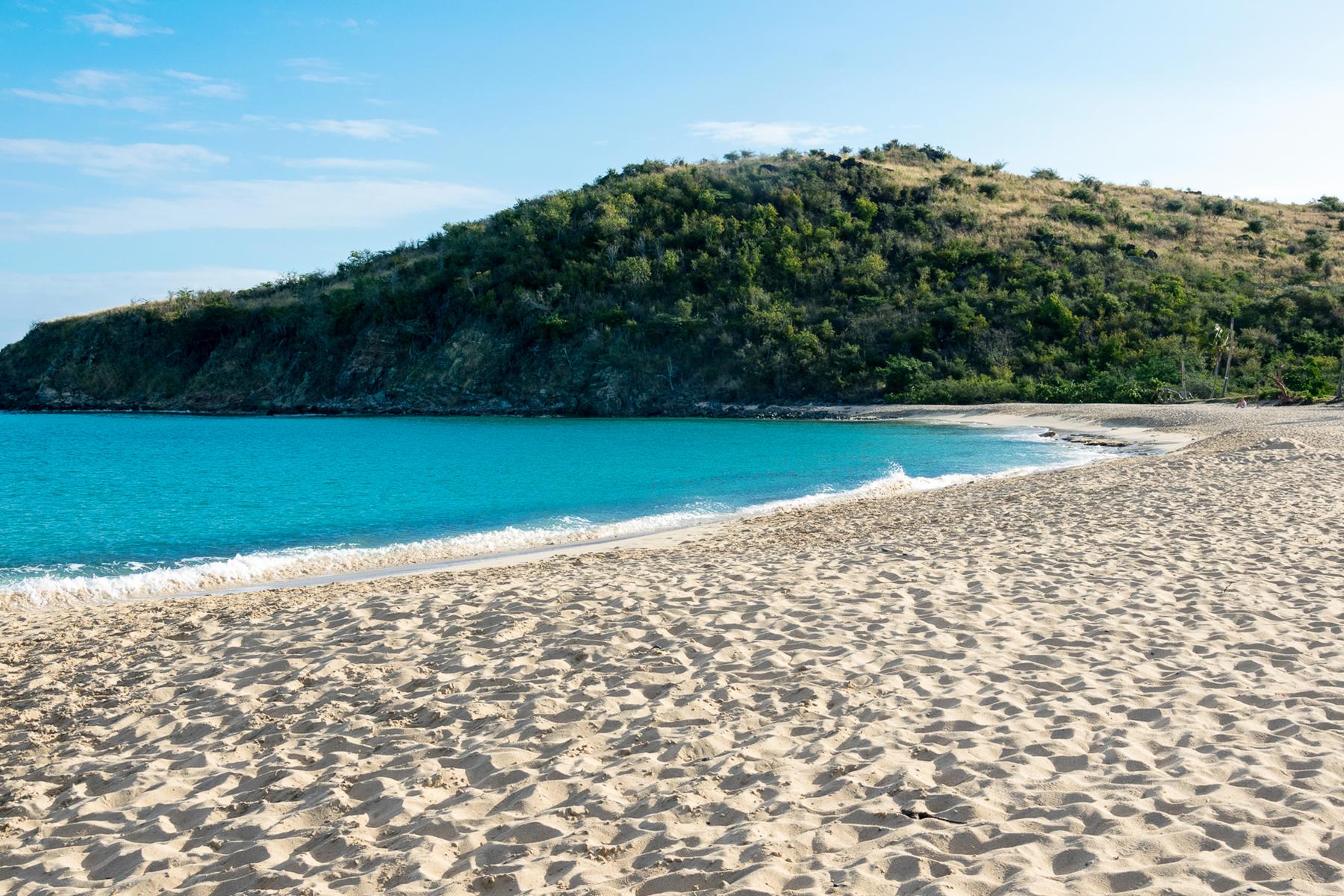 Follow the trail—there’s no sign, but it’s decently trod—that leads from the backside of Friar’s Bay, past the trees heavy with iguanas sunning themselves, and through grassy pastures overlooking plunging cliffs. The 12-minute walk ends in a cluster of sea grape shrubs that open onto a stunning secluded beach flanked by volcanic boulders to one side, and lush hills to the other. Happy Bay is popular with naturists, but textile-lovers and clothing-averse patrons alike enjoy the gentle waves here. A small snack shack offers rum punch, cheap local beers, and barbeque (make sure to order before 11:00 a.m., the kitchen closes early).

INSIDER TIPThe beach was badly hit by Irma, which ripped up many of the shade-giving palm trees that used to populate the shoreline. If you plan to camp out for a while, and you’re not a sun worshipper, bring an umbrella. 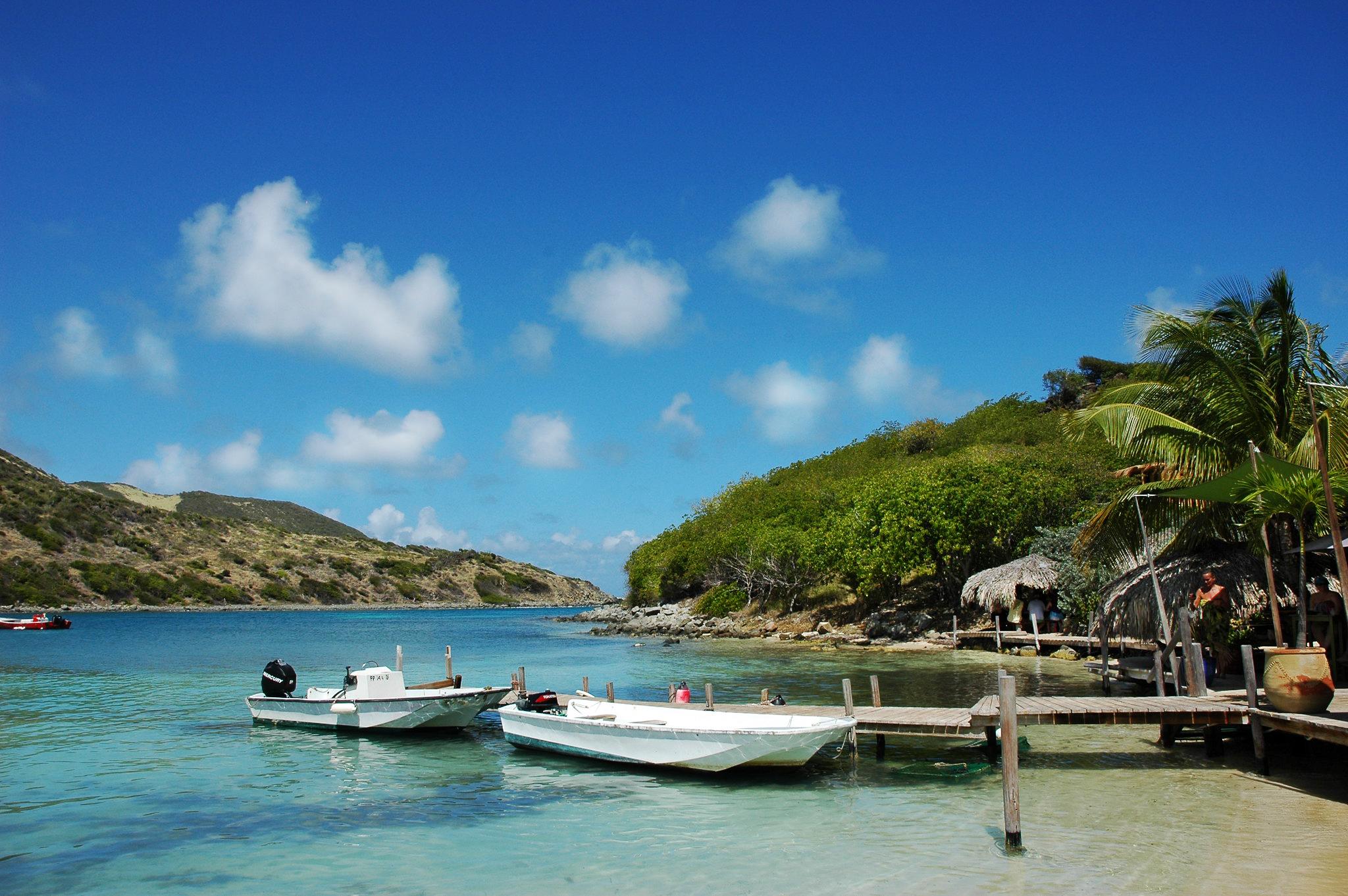 A five-minute ferry ride from Cul de Sac is one of SXM’s most charming spots to while away an afternoon: Pinel Island. There are no hotels, no Wi-Fi, no cars, but there are duo beach bars, both with excellent kitchens, as well as two phenomenal beaches. Yellow Beach is built up with beach chairs and umbrellas for rent, as well as tables floating in the water, where you can enjoy rosé while lounging in the sea. Those who prefer a more lo-fi beach experience should follow the not-so-clearly-marked path behind the curio hut. On the east side of Pinel, there’s an untouched beach with blinding white sand where you can relax au natural—or not, anything goes.

INSIDER TIPClothes are optional here, but beware sitting on the sand bare-bummed without looking first—there are heaps of hermit crabs that call this sandy oasis home. 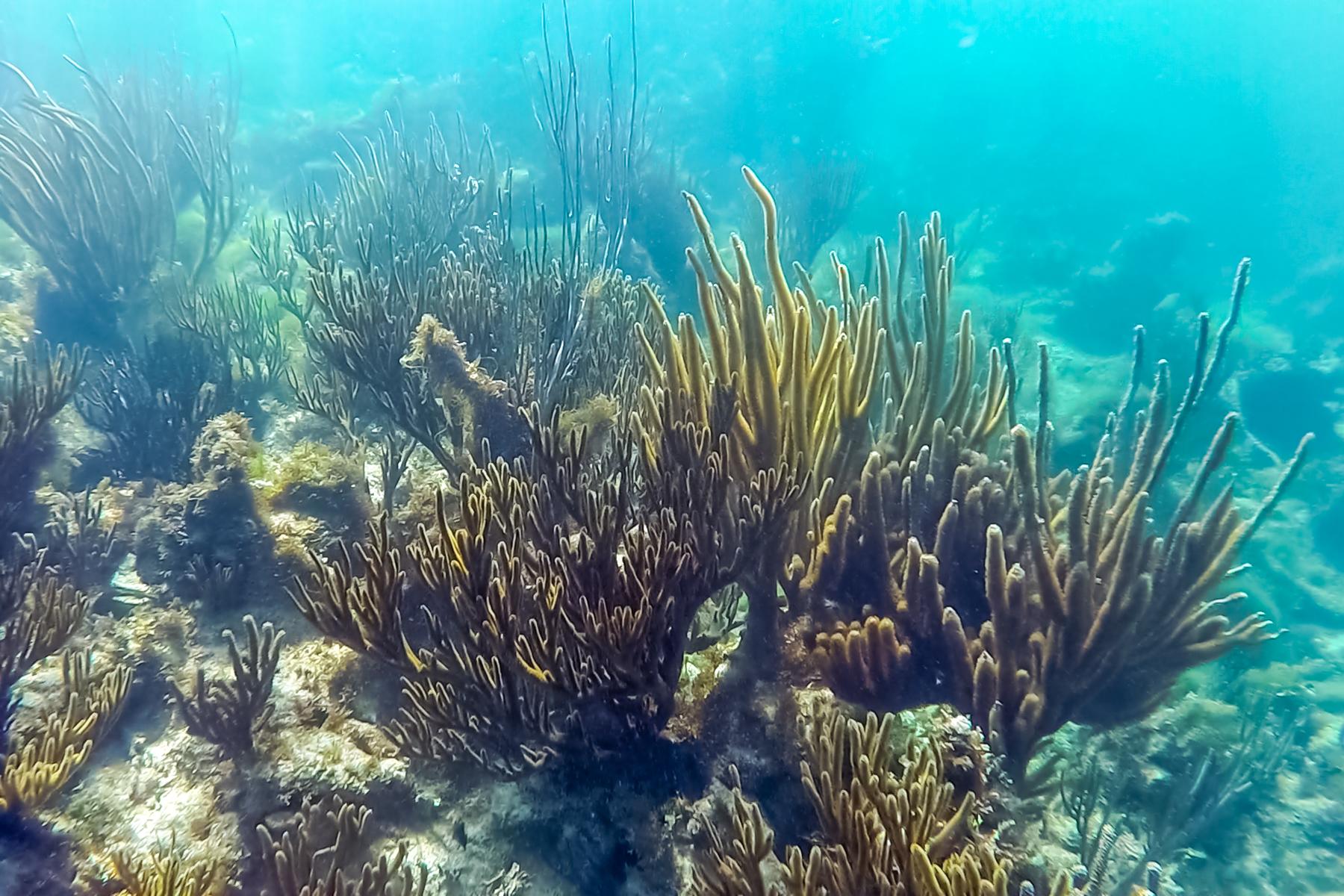 Many of St. Martin’s reefs are still recovering from hurricane Irma, which ripped across the island nation causing billions of dollars in damage back in 2017. Houses were decimated, boats were beached, and the wildlife above and below the sea suffered, too. Around the backside of Pinel is one of the most intact reefs on SXM. There you’ll find a gorgeous sea fan forest that’s home to trigger and angelfish, as well as lobsters aplenty.

INSIDER TIPSea turtles prefer the grassy west side of Pinel, by Yellow Beach. 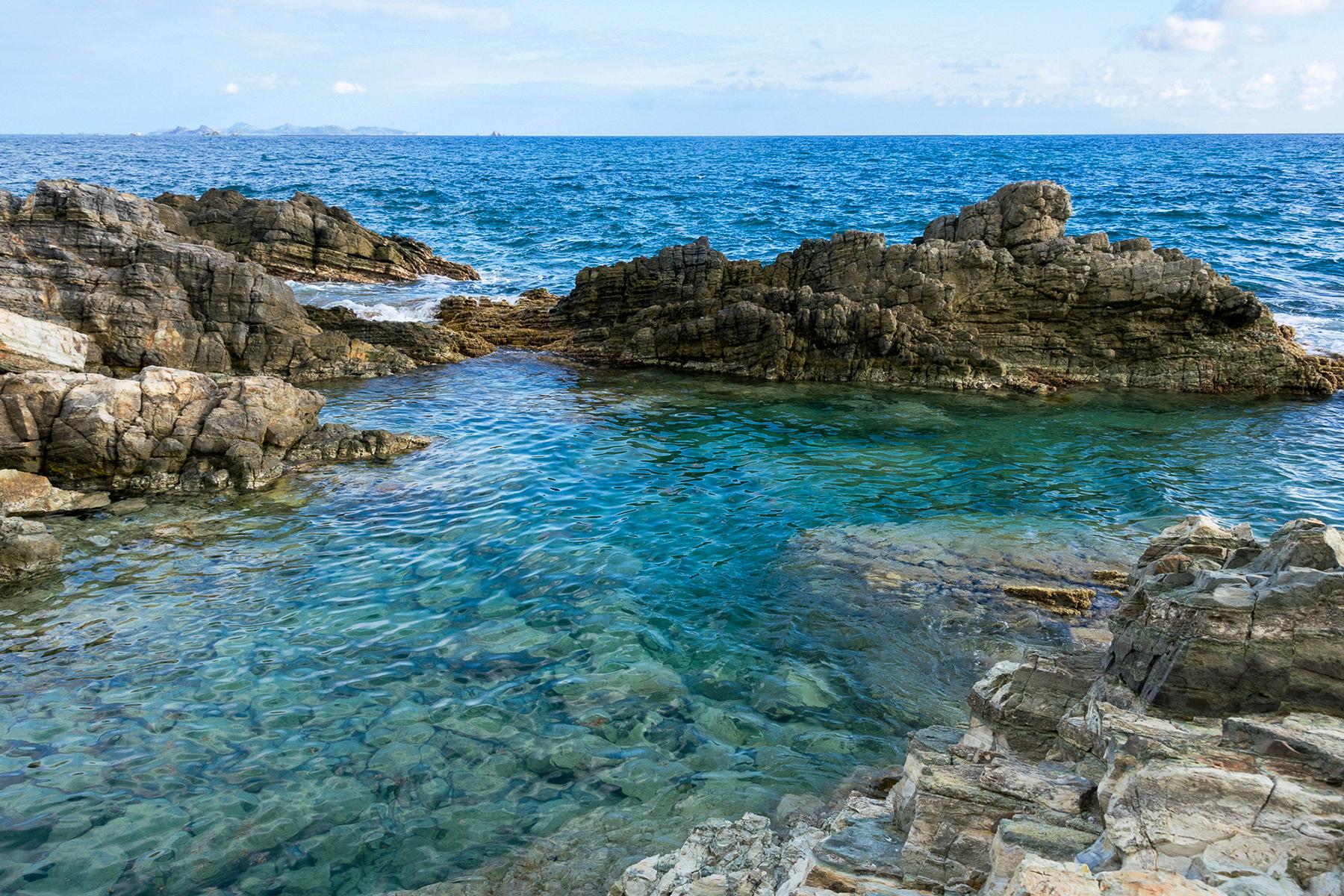 A once-majestic, now-delipidated villa marks the start of the one-hour hike to Devils Cupper, a magical-looking tide pool that looks like it could be home to a mermaid. Friendly goats mock clumsy climbers as they gracefully hop across the steep cliffs along the route. Those seeking vertiginous thrills will be delighted, as the path seems to drop away at points into the ocean. The tide pool, protected from the crashing waves by stunning, striated boulders, is full of life: banded coral shrimp, green eels, and sea urchins (which can make getting into the pool precarious without water shoes).

INSIDER TIPWear close-toed shoes; there are large cacti along the route as well as loose stones. Alternatively, Devils Cupper is accessible via a shorter (though, less stunning) hike from Point Blanche Bay. 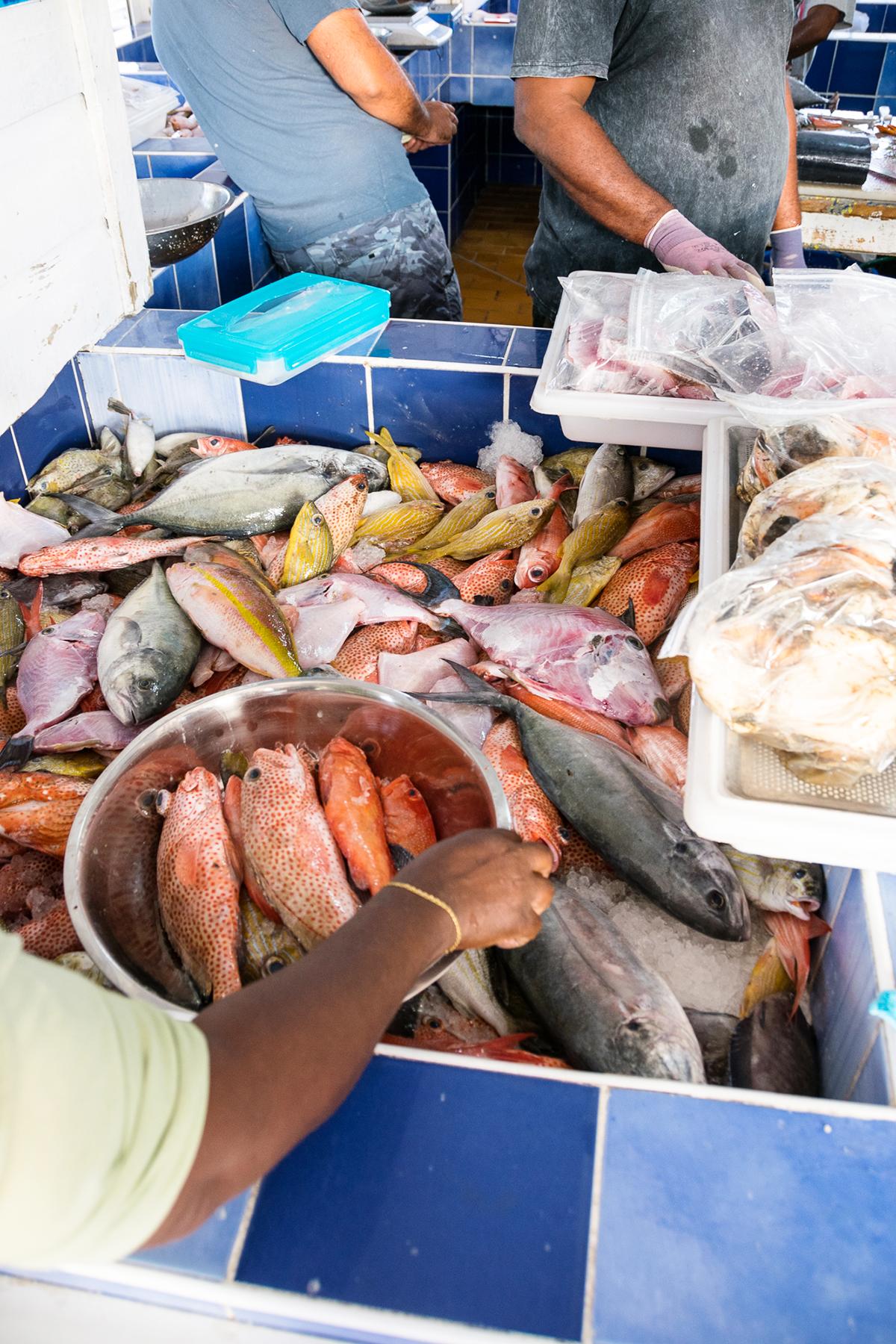 The Wednesday and Saturday morning fish market in Marigot is a lively sight. Fishermen clean fish by the waterfront and sell snapper, lobster, tuna, trunkfish, and more in the pavilion. The prices are marked on the wall, but after 11:00 a.m., the fishermen are eager to barter.

INSIDER TIPCome closer to 8:00 am for the best selection. 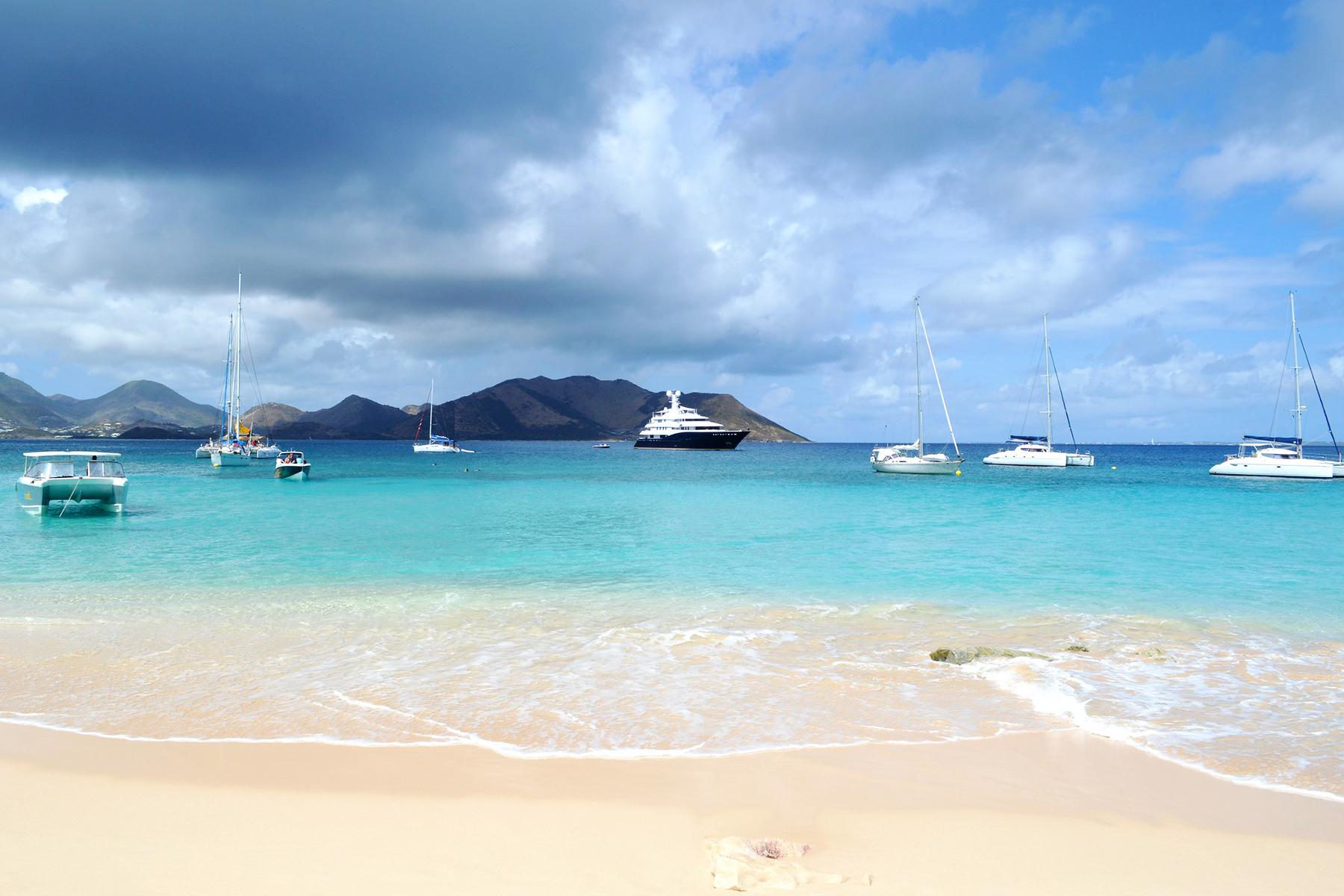 Three kilometers off the northeast coast of Saint Martin there’s a deserted island with fascinating ruins (of an old mansion, a sea island cotton plantation, and an abandoned airstrip), white beaches, and some top-tier snorkeling. Of the island’s beaches, Baie Blanche is the best for swimming. In the grassy underwater plains, you’ll find sea turtles grazing. There’s no ferry that runs here, so you’ll either have to charter a boat or choose a boat trip (such as Captain Allan’s) that visits Tintamarre.

INSIDER TIPSound like a local by referring to Tintamarre as “Flat Island.” 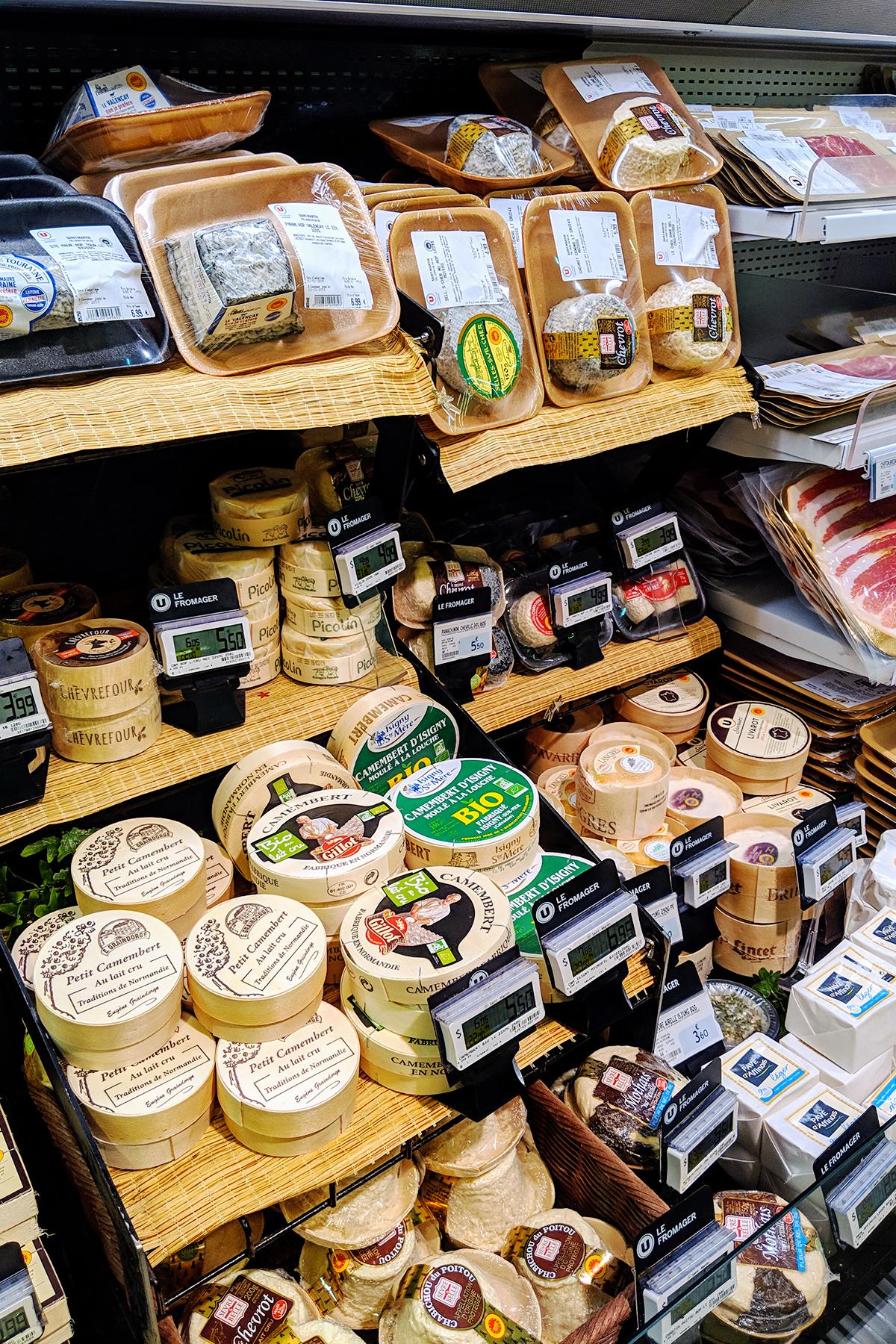 Food in the Caribbean can be pricey, especially in SXM, which has little local agriculture. Not everything delicious needs to put a strain on the wallet, though. Some of the cheeses, ciders, and wines imported from France are insanely affordable. Super U’s store brand cheeses are particularly delicious, and excellent value, too. Their Camembert is perfect: a decadent melt-in-your-mouth wheel with that perfect Noman funk for only €3. 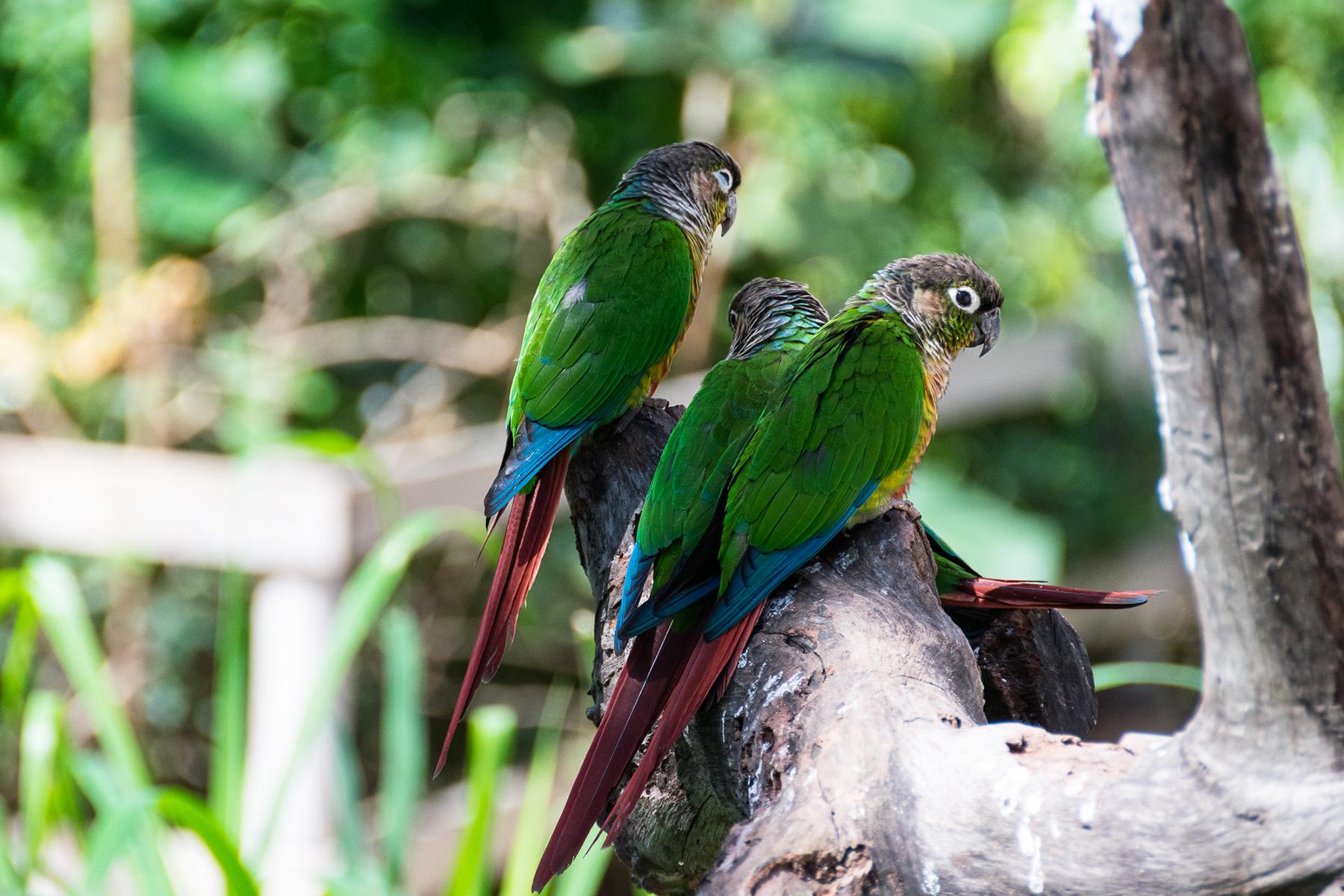 There’s no website, and it’s tucked into the island’s interior, making Parrot Ville a challenge to find without some help from Google. This off-the-beaten-path bird sanctuary breeds and rescues parrots that can no longer live on their own in the wild. Spend as long as you please wandering through the lush greenhouse as emerald, sky blue, and red-and-yellow flecked parrots fly overhead. The entry fee ($10 for adults, $5 for children) includes a cup of sunflowers, which the parrots gleefully perch on while they gorge themselves. The bolder birds will even sit atop heads, and some of the cheekier parrots will try to steal your shiny baubles. 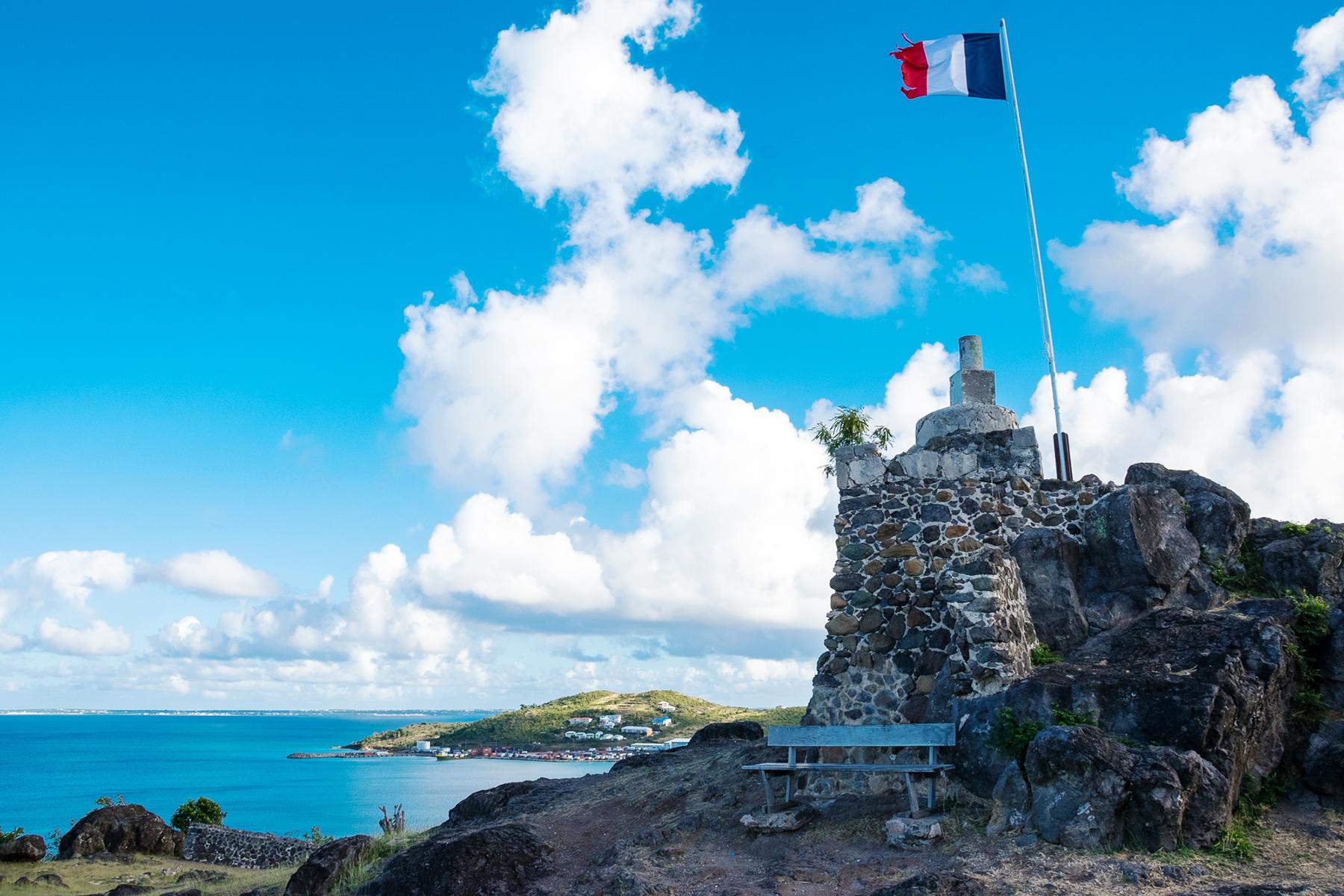 Okay, so it’s not exactly a secret: there’s a large 18th-century fort sitting atop Marigot. Fort Louis often doesn’t make best-of lists because, well, it’s mostly a ruin with a few bilingual plaques and some sad looking canons. The hike up here isn’t for the time-eaten, battle-and-hurricane-battered walls: it’s for the view. From up top, you can see Marigot below and beyond to Nettle Bay, Simpson Bay, the Lowlands, and even neighboring island Anguilla. This is truly a fantastic vantage point from which to orient yourself with the island’s geography. 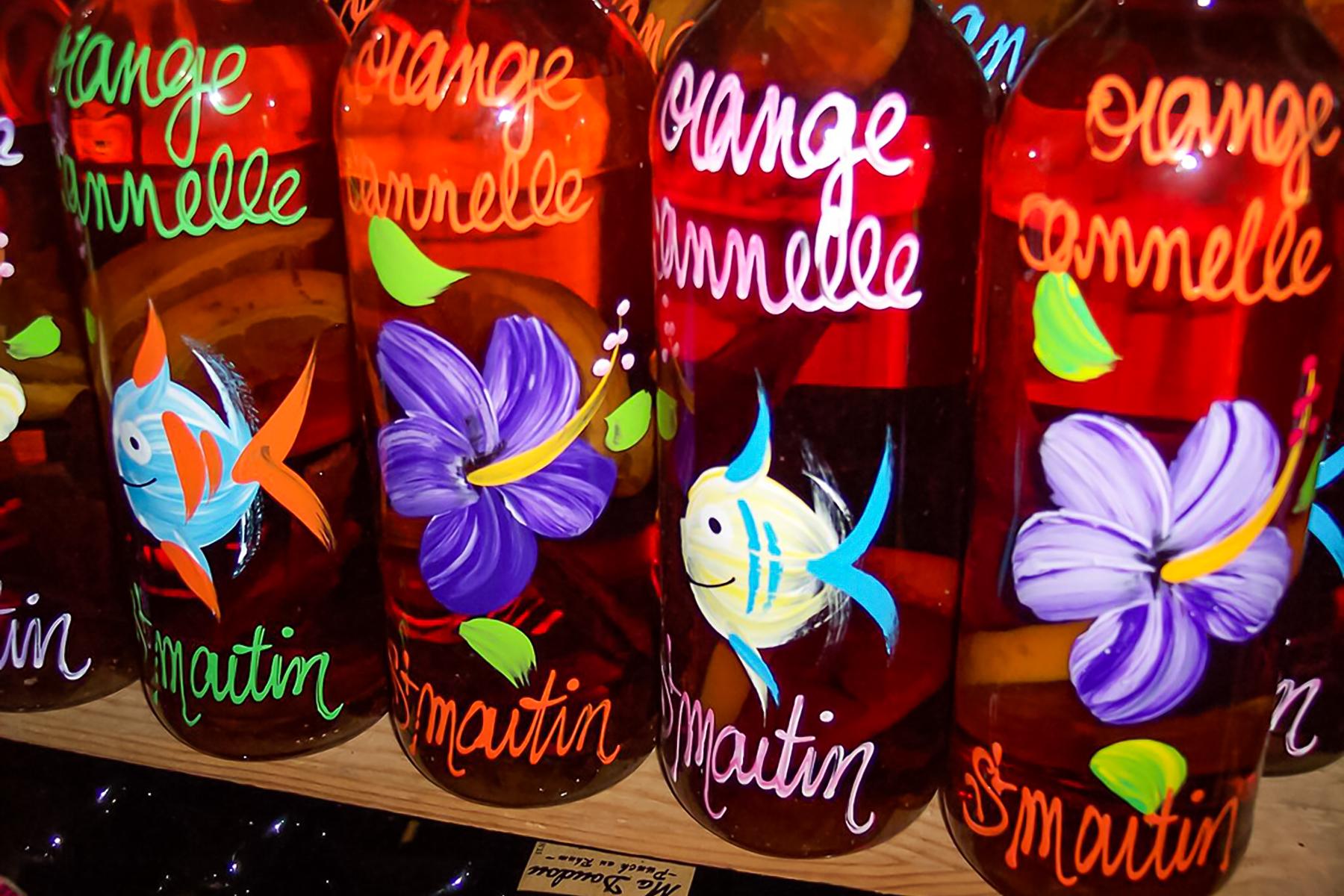 While waiting for the ferry to Pinel Island, make sure to take the 10-minute walk up to this pastel-painted shack. The pink-and-green house looks like it was plucked from a Wes Anderson movie. Inside, every conceivable nook and cranny is jam-packed with adorably-packaged artisanal products, including local preserves (the coconut jam is superb), liqueurs (try the vanilla-banana), and some seriously spicy hot sauces. Many of Ma Doudou’s items are also available at local shops, but they’re cheaper from the source, plus you can sample anything that entices. 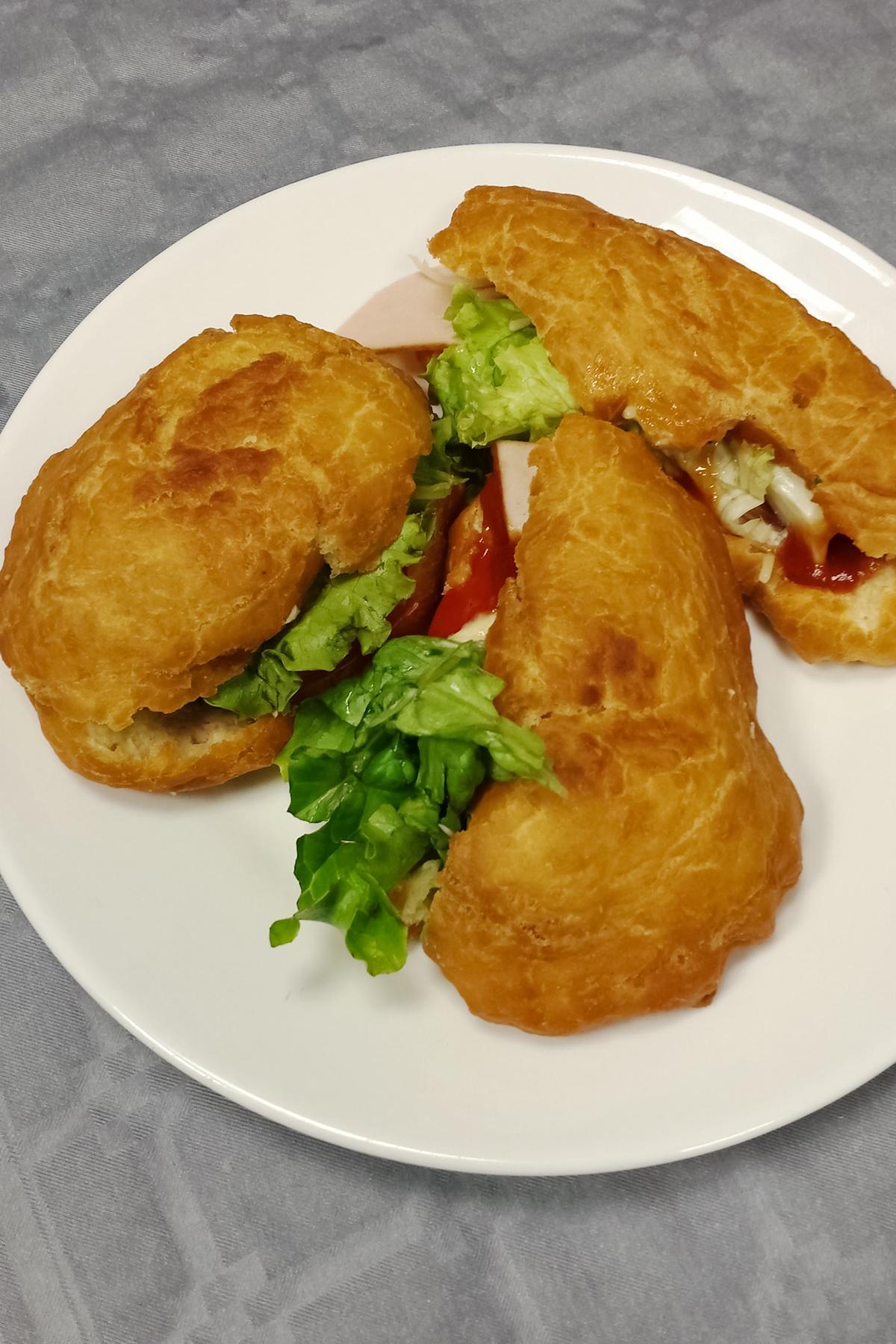 This deep-fried sandwich originally hails from Guadeloupe, but it has island hopped its way to Saint Martin. This perfect late-night, sud-sopping street food is defined by the bread, which has a deep-fried crunch on the outside, with a yielding cloud-like interior. A bokit can be stuffed with anything from cheese, to ham, sausage, cod, tuna, and more. There are a few food trucks on the island selling bokit, but the Eunice Eunick Bokit truck parked in the center of Marigot is one of the most popular. Expect to wait up to half an hour for your sandwich at peak meal times.