He’s the jolly mixologist at the center of a long-running controversy over Puerto Rico's national cocktail, the piña colada.

It was 6 p.m. on August 9th, 1977, when Héctor Santos López waltzed into the Caribe Hilton Hotel. He began working at the storied Puerto Rican resort—Hilton’s first-ever hotel outside the continental U.S.—after his cook uncle brought him into the fold. Today, you can still find him at the hotel’s illustrious Caribar whipping up the vacation in a glass that is the piña colada; a delicious and highly contested concoction that was created right there. López knows this to be true because he worked with the bartender who invented it.

A gray-haired, convivial grandfather of six, López has been at the Caribe Hilton for 45 years and he worked alongside the late Ramón “Monchito” Marrero who famously created the cocktail back in 1954. He is therefore the last person at the iconic resort who can put to bed the complicated origin theories for the piña colada—of which there are many.

According to the hotel, back in 1954, the bartender “Monchito” was tasked with devising a signature drink for its Beachcomber Bar (which has since been replaced with Caribar) and he came up with a winning mix of pineapple and coconut cream. It was initially a refresher and it didn’t originally have alcohol. After rum was added, the cocktail soared in popularity and Marrero’s place in history was cemented.

This version of events is, however, hotly contested by another San Juan establishment, Barrachina, which claims to have gifted the world the mixture in 1963. But what does Marrero’s old colleague Héctor Santos López have to say about that?

“They know that their story is fake but they already said it so they have to continue,” he remarks about Barrachina. “They can’t take it back now.” López points to the clear difference in the taste of their drinks as a signal of provenance and quality. “Our piña colada here has body and balance; it actually tastes like one,” he gushes. “Their version just tastes of pineapple juice.”

A man that has made no fewer than 300,000 piña coladas in his time probably knows a thing or two, and he learned from the very best. Héctor López worked at Caribe Hilton with “Monchito” Marrero (who has since passed away) for just shy of a decade before he retired. “Really, ‘Monchito’ was so humble and he was always, always smiling,” López recalls fondly. It’s perhaps unsurprising that the man that dreamed up this summery elixir would be a pocketful of sunshine. “He was so cheerful and from the moment he started work till he went home he was making piña coladas; people knew he was the piña colada man.”

López also points to an early ’90s Bacardi commercial in which a scantily-clad female bartender delivered the sultry line, “Ramón te atiende” (“Ramon will attend to you”). This appeared to be a direct reference to Ramón Marrero, further solidifying his inventorship.

Marrero is also enshrined at Caribe Hilton’s Caribar with a larger-than-life photo on a wall that depicts the original recipe, too. Also on display at the hotel are not one but two government declarations proclaiming the resort as the cradle of the piña colada. One was granted by Puerto Rico’s first female governor, Sila María Calderón Serra in 2004. Over the years the resort has seen presidents, pageant queens, and Hollywood royalty walk through its halls. After swinging open in 1949, the San Juan hotel became a playground for the who’s who of the glitterati from Elizabeth Taylor and her first husband, Conrad “Nicky” Hilton Jr., to Sofia Loren and Puerto Rican singer, Iris Chacón.

“We attended to Johnny Depp when he was filming The Rum Diary here in Puerto Rico and I have also seen Marc Anthony and Jennifer Lopez when they were together,” says Héctor López. “I have been here for a long time, met plenty of artists and celebrities, and I have seen all the transformations of the hotel.”

During his early days at Caribe Hilton, salsa-loving López recalls the popularity and feverish excitement around the piña colada, which became Puerto Rico’s official drink the year after he started.

“The bar would be at full capacity and almost every picture you look at from around that time is someone holding a piña colada,” he recounts. The furor around the drink’s creation is perplexing to him largely due to the date the Barrachina restaurant in Old San Juan claims to have concocted it.

“They created theirs in 1963, that’s nine years after it already existed here,” he states. López may not have been on active duty himself when the drink was first beautifully blended in 1954, but he sure knows someone was. “My uncle Carmelo López Rosa was actually working at the hotel at the time,” he announces. “The story my uncle told me is that it really was invented here.” 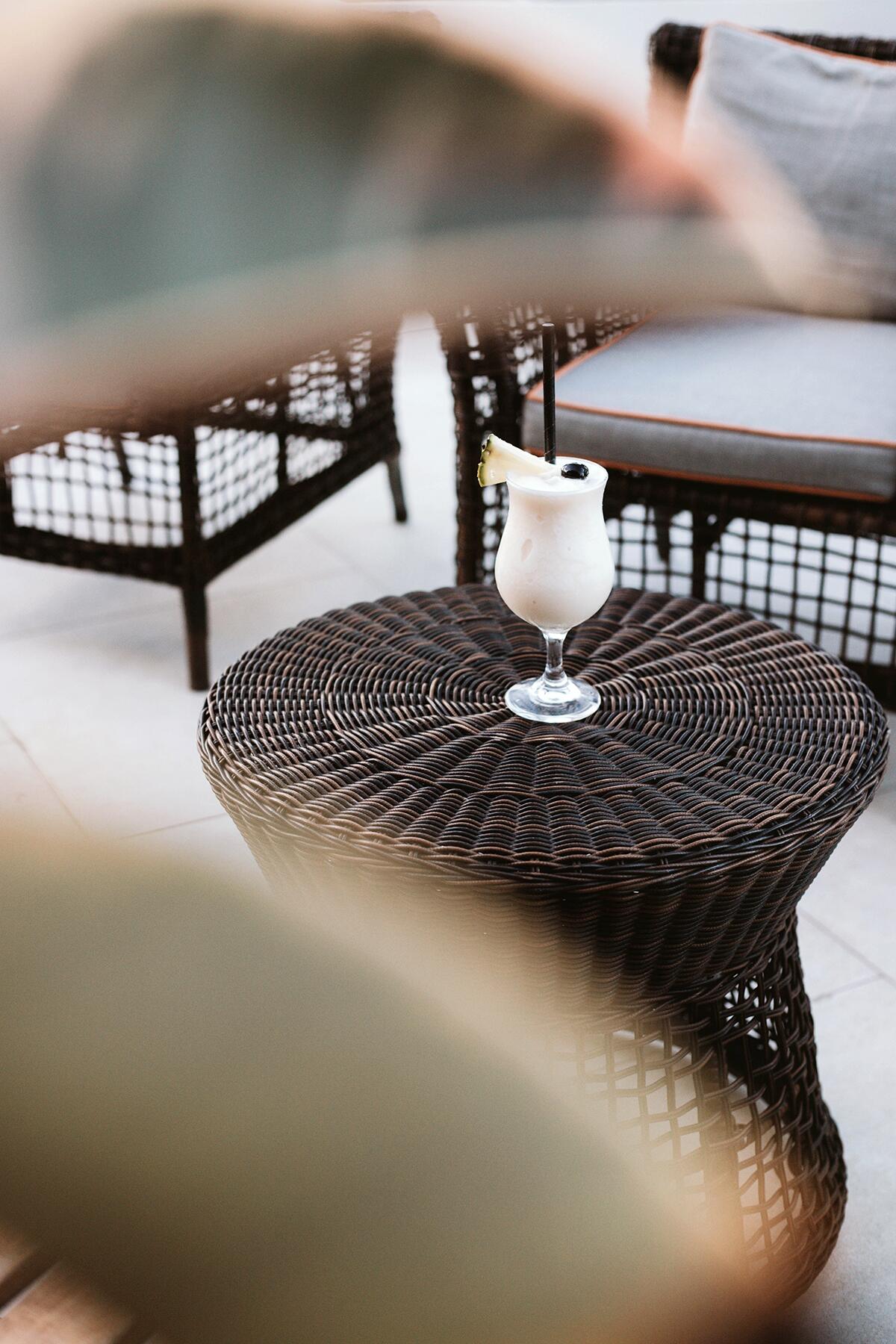 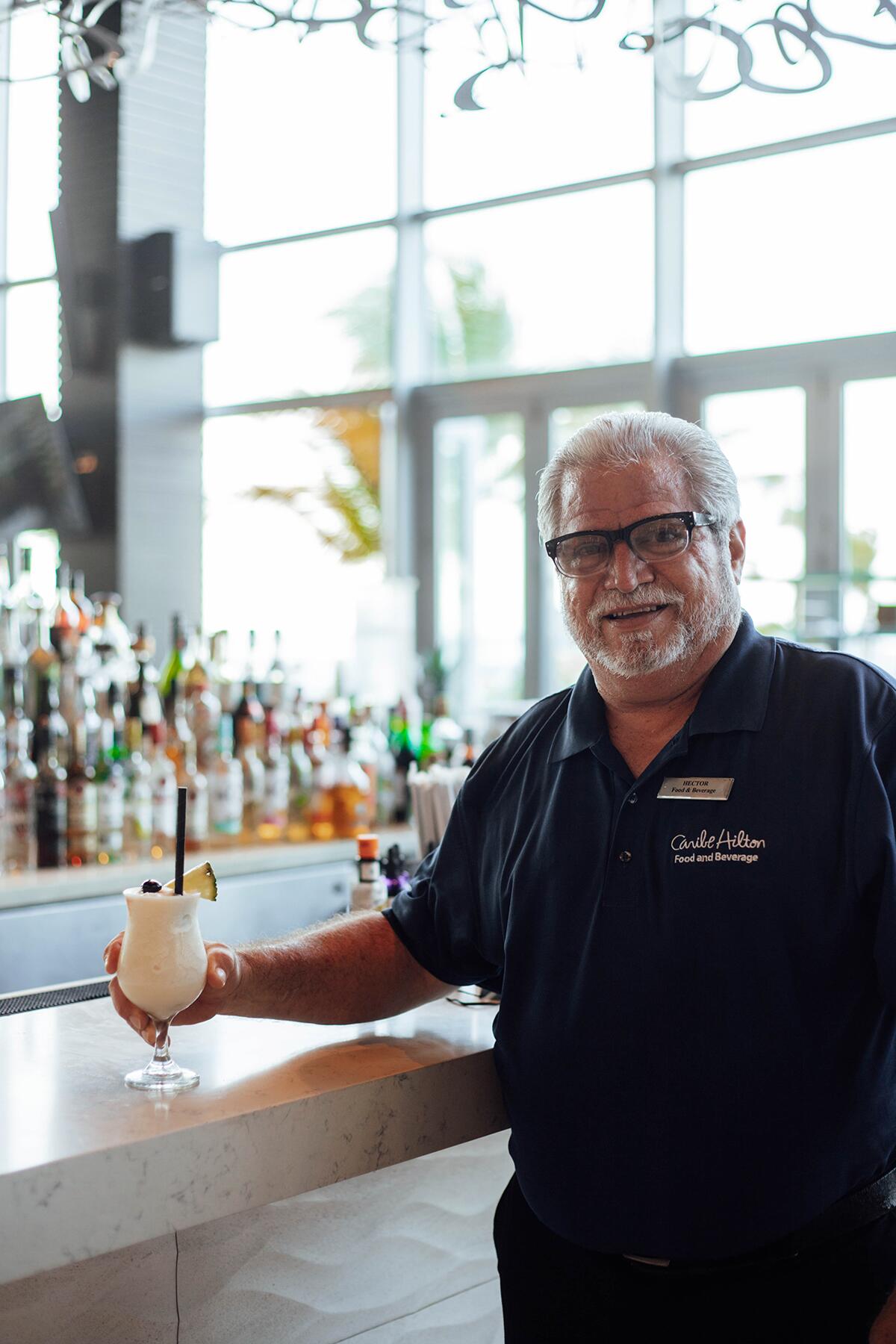 Héctor Santos López is Caribe Hilton’s longest-serving bartender and working at the hotel appears to be a family affair—his grandson is now also part of the food and beverage team. “I was practically a kid when I got here; I feel like it’s my home and I love it,” he confesses. So, next time you’re in San Juan at 6 p.m., feel free to let López lovingly whip you up a delicious drink if, like Rupert Holmes, you like piña coladas and getting caught in the rain.