On the Puerto Rican Island of Vieques, wild horses aren’t as carefree as they appear.

I sat on the concrete wall outside Antonio Rivera Rodríguez Airport in Vieques, six miles off the southeastern coast of mainland Puerto Rico, where I’d come to kayak the island’s world-famous bioluminescent Mosquito Bay. As I waited for a taxi, I watched a pair of slender stallions—one chestnut and one palomino, reminiscent of my own horses—browsing the meager grasses between dumpsters. An airport is, of course, no place for an equine. Were these the wild horses I’d seen romantically described in travel articles and resort websites?

“It is very hard to see travel news and PR people touting the beautiful wild horses of Vieques,’” says Betty Gilreath, Vice President of Hooves on the Ground/Pezunas en el Suelo, an equine rescue she co-founded three years ago. “There are no wild horses on Vieques.”

Conservative estimates put the island’s horse population at around 750, but there are likely well over a thousand. All are owned by residents; they’re roped and ridden when needed, then set free to roam. On the bus ride to the bio bay tour, horses grazed so close to the road’s edge that I could almost reach my hand outside the window and brush the flies from their shaggy coats.

Although many believe the paradisical island has the natural resources to support these animals, sadly, horses can be seen overturning garbage receptacles daily in search of sustenance. During droughts, they die by the dozens. Wandering foals are downed by feral dogs, and a simple cut can lead to catastrophic results. The average pastured horse lives about 30 years. While some make it that long on Vieques, Ashley Clark—a lifelong resident who has adopted four horses—says the majority live maybe five to ten years, if lucky. 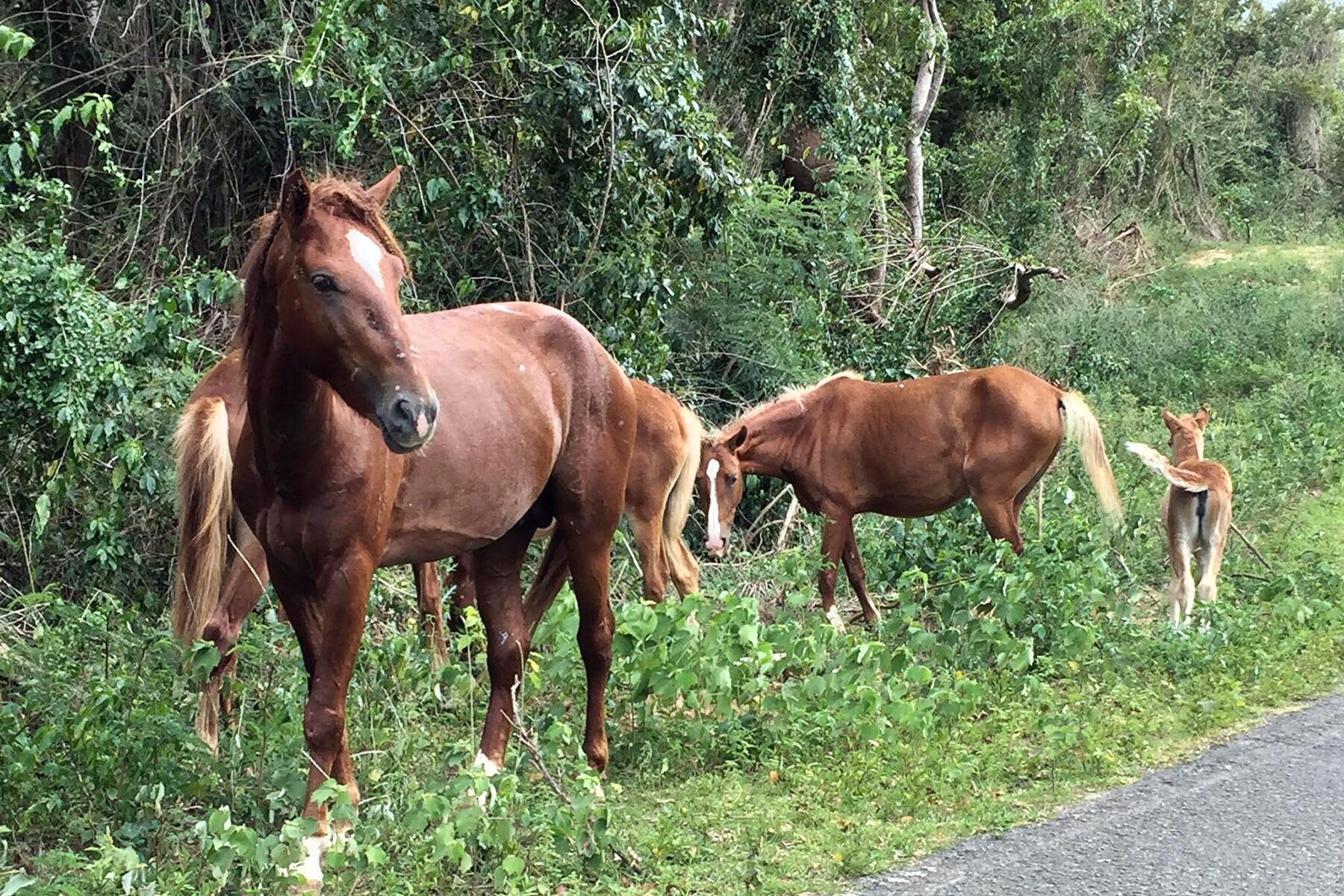 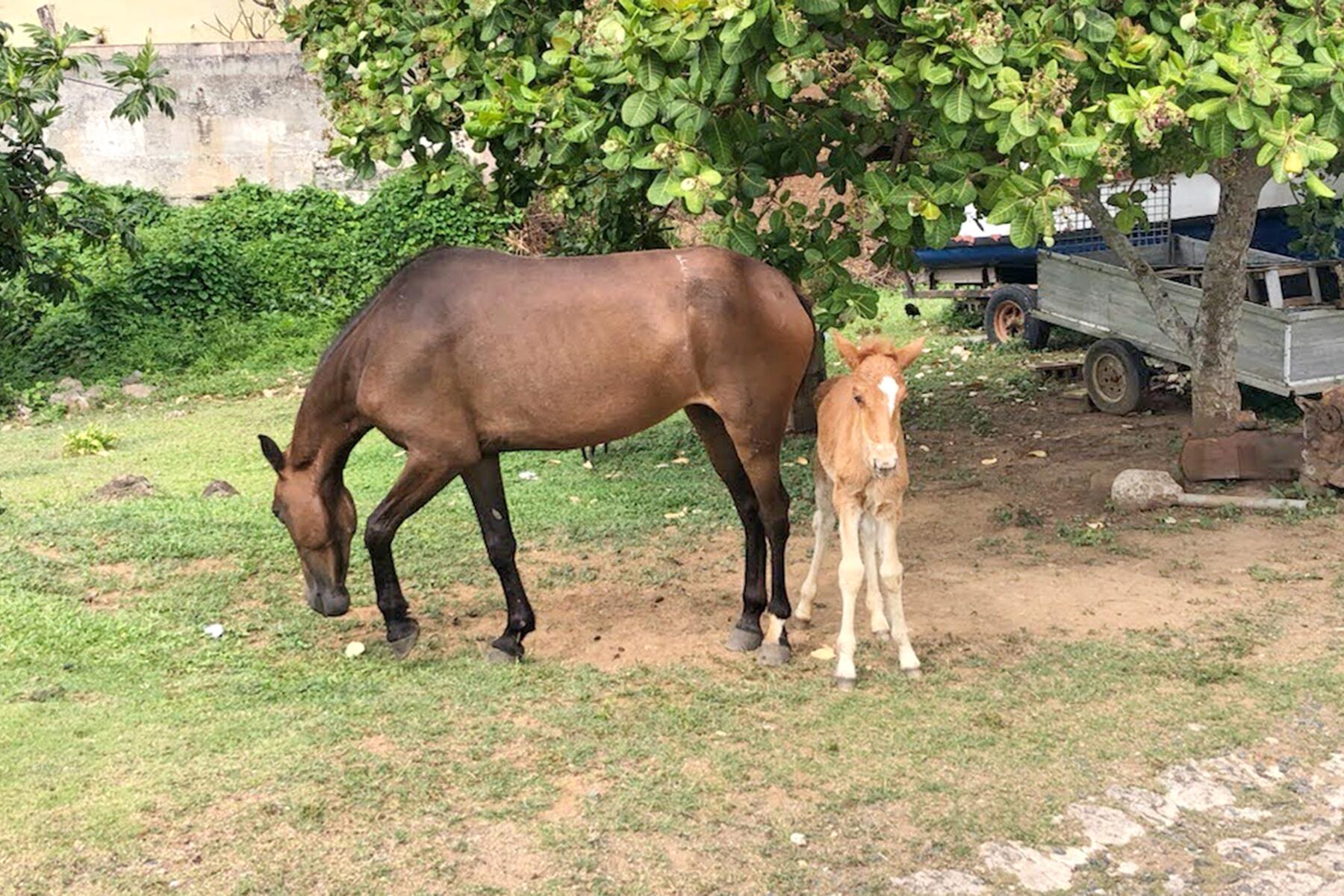 Origins of the Horses of Vieques

Horses came to Vieques via Spanish colonizers, who developed the Paso Fino, a light-bodied equine known for its stamina and quick-stepping gait. As mainlanders later transported additional animals to the island, bloodlines comingled.

The horse population exploded as residents exited Vieques, first after the sugarcane industry collapsed in the 1930s, again in the 1940s when the U.S. Navy expropriated the island, and in the 1970s when the military used it for bombing practice. In 2017, Hurricane Maria displaced thousands and caused widespread destruction, including the island’s native grasses, the horses’ primary food.

In a municipality with a median annual household income of about $14,000, few have the financial resources to support a horse. On her small property, Clark keeps Príncipe (who had been abused with a twitch, a tool used to restrain a horse), orphaned Vulcan (who was attacked by a dog), Missy (a mare found meandering in front of a Chinese restaurant from severe dehydration), and Swizo (a foal discovered drinking saltwater at the beach). Feed and hay shortages are common. Clark reports that competition to beat other livestock owners to the store on delivery day is fierce.

Still, for many Viequenses, says Janie Chadwick, executive director of Vieques Island Animal Sanctuary, Inc., the animals are as close to the culture as sand is to the beach. It’s not unusual for a resident to lay claim to 50 or more horses and use them for transportation around the 105-square-mile island. For others, horse ownership is about showmanship. Several times a year, especially around holidays, they participate in a cabalgata, a procession from one location to another, with stops along the way to eat, drink, and socialize.

The goal for many at these events is to flaunt their riding skills and the horse’s training and brio, or energy. I get a taste of it when I spot a well-dressed caballero, or horseman, chest-high, riding a muscular sable horse back and forth in traffic along Highway 997 in Esperanza.

According to Puerto Rico’s Law 154, allowing a horse to roam freely constitutes neglect or abuse. The law is rarely enforced. “There are a few very good police officers who are animal lovers, but their hands are tied,” Gilreath says. “There are only one or two on duty for the whole day, for all the island’s needs.”

Disorganized attempts to remove the horses have resulted in protests from owners. And there’s no facility for rehoming thousands of equines. Many carry piroplasmosis, a blood-borne protozoal infection common in Caribbean horses, and are restricted from import into most developed countries.

In 2017, former Vieques Mayor Victor Emeric brought in the Humane Society of the United States (HSUS) to control the horse population. They administered contraceptive vaccines, via dart gun, to mares. In an AP Television video, HSUS representative Stephanie Boyles Griffin asserted, “By limiting reproduction, we’re going to reduce the competition for those resources, and these animals are going to be happier and healthier. And that’s what the community wants.”

The community disagreed. Uproar intensified after a couple of stillborn foals gave rise to a conspiracy theory that contraception would render the horses sterile. The HSUS vacated the island. They declined my request for an interview.

Currently, there’s only one part-time vet on Vieques. Chadwick says, “Even full-time, one veterinarian can’t possibly handle what we have here.” Additionally, misconceptions about horse stewardship abound. For example, hide branding is customary to signify ownership. Clark recalls that Príncipe’s initial mistrust of humans was so pronounced, he would kick whenever she got close. “I was always crying, like, ‘How am I going to get this horse to love me?’” she says. “People would tell me, ‘You need to be meaner to him.’”

As they often do, tourism and development have complicated the picture. The ensuing flood of cars has increased collisions with the animals. It’s rare for a horse owner to come forward following an accident for fear of being held responsible for the driver’s damages and medical bills. In these cases, euthanasia by gunshot is the norm.

Over the past two decades, animal rescues founded by ex-pats from the States, and assisted by Viequense volunteers, have provided everything from free vaccine clinics to first aid and middle-school seminars on horse care. But given the island’s fraught history, skepticism of white interference is pervasive.

Such was the case for Gia; a stunning pregnant mare reported to Hooves on the Ground with a gaping machete wound to the leg. At the rescue, she has completely recovered and given birth to a healthy foal.

But for every Gia, Príncipe, or Swizo, hundreds of horses must fend for themselves. Experts say the solution begins with the government of Vieques. Several rescues have asked for land for maintaining horses, but approval has not materialized. Gilreath points out that although the municipal budget has included funding for a humane officer for several years, the position has never been filled.

Gilreath and Chadwick believe residents will be the voice of change. “There are some really good leaders, young Viequense men, and women, who take excellent care of their horses,” Gilreath says. “They are greatly respected and are mentors for the next generation.”

Clark is one of them. She ticks off a list of potential solutions, from a trough of water in every barrio to a community group dedicated to horsemanship and stewardship education from elementary through high school.

She also notes the benefits to both the environment and animals of limiting development and the number of cars per household. “We do not need more hotels or Airbnbs,” she says. “People will not die of hunger if we don’t build one more restaurant. Build more for residents, not for tourism.”

I left Vieques under the violet-pink of dawn, the scent of flor de maga thick on the air. As the taxi sped out of Esperanza, I caught sight of a small gray mare; face buried up to the ears in a trash can outside a bar. I could count her ribs through her matted coat. Her head bobbed up, a plastic grocery bag dangling between her teeth.

To help the horses of Vieques, donate to Hooves on the Ground, Our Big Fat Caribbean Rescue, and Vieques Island Animal Sanctuary.