On Norfolk Island, finding the right person in the phonebook is an exhausting prospect—only a handful of surnames, like Christian, Adams, and McCoy, fill the tome. In fact, eight large families made up the entirety of the destination’s original settlers, who arrived much like the Pilgrims on Plymouth Rock. And due to its far-flung location—a tiny dot in the open ocean halfway between Australia and New Zealand—not much has changed in the 150 years since. Today, when the 1,600-some descendants commemorate their beginnings, the term “founding fathers” is taken very literally; Bounty Day, held every June—and perhaps the planet’s most obscure independence day—isn’t just a national celebration; it’s a giant family reunion.

In 1789, Fletcher Christian unwittingly started a new nation when he committed mutiny aboard the HMS Bounty, tossing its captain and loyal sailors out to sea in a small wooden launch. Along with his coconspirators, Christian stopped on Tahiti to pick up two-dozen locals, then set sail in search of a hideaway where he could escape the inevitable search party that would hunt him down and hang him for his crimes.

Pitcairn Island—halfway between Tahiti and Easter Island—was found and quickly settled with one of the 18th century’s only democracies. It was a spectacular failure; a few years in, almost everyone was dead due to rampant distrust and drunkenness. But all was not lost: the survivors swore an oath of abstinence and piety, and, after 18 years of solitude, were discovered on accident after an American sealing vessel swerved off course during a storm. News of the long-lost mutineers’ progeny filled the newspapers around the world, as did the tale of a morally incorruptible society that dwelt in the most remote corner of the globe.

When Pitcairn’s population grew to almost 200 citizens—far too big for an island that measured around the size of New York’s Central Park—they petitioned Queen Victoria to resettle in a locale that provided more space for their colony to thrive. Taken with their backstory and evolution into model Christians, Victoria offered them Norfolk Island—around five times larger—for free.

Early evidence suggests the presence of proto-Polynesians on Norfolk, but its first confirmed citizens were convicts cast off from Britain as part of its elaborate penal colony system that had sprung up in several locations throughout Australia. Norfolk’s remoteness relative to the other encampments meant that it was specially reserved for the most hardened of criminals. Then, the U.K. wound down its deportations in the mid-1850s, abandoning Norfolk and consolidating its criminals on Tasmania. 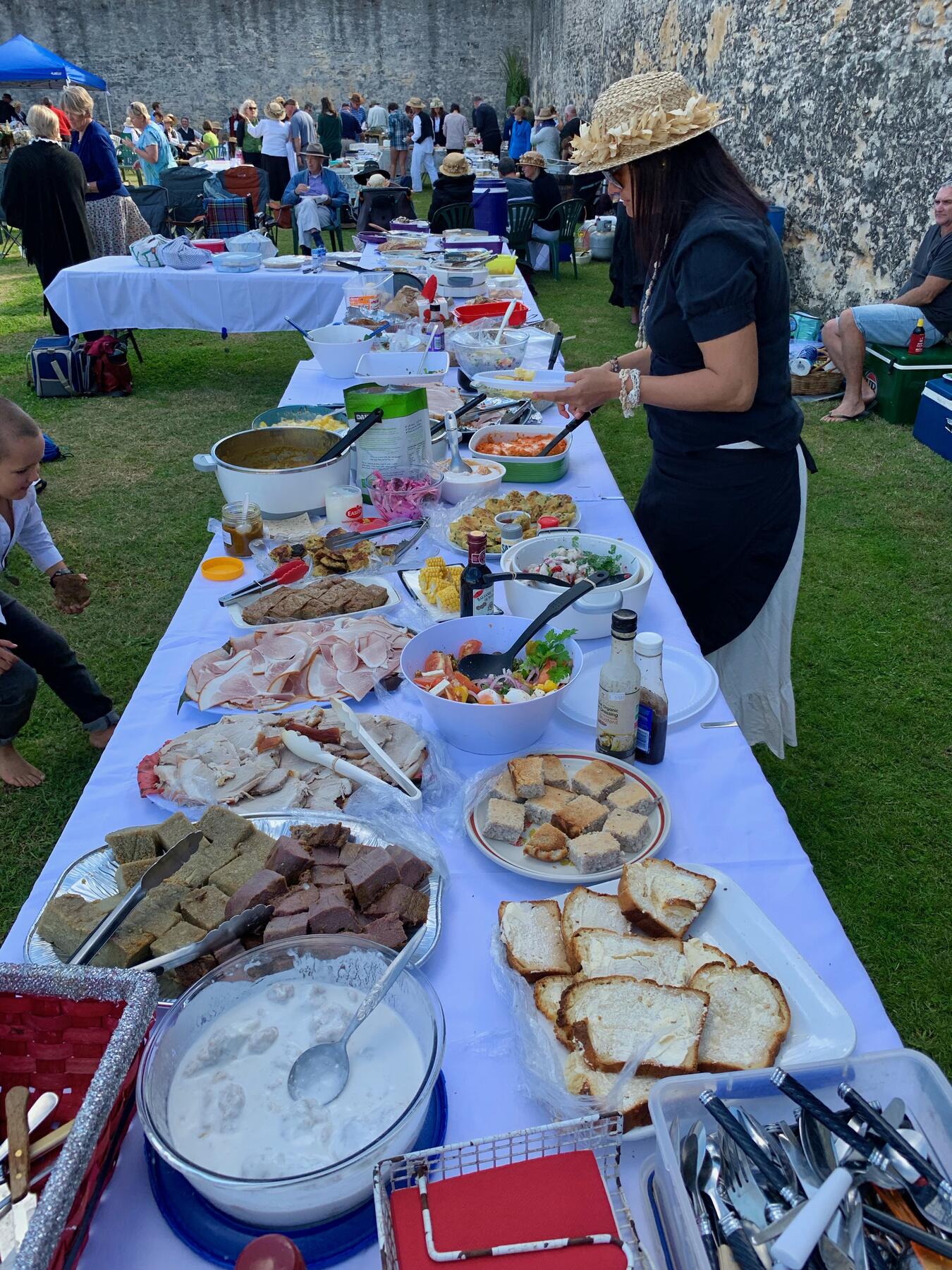 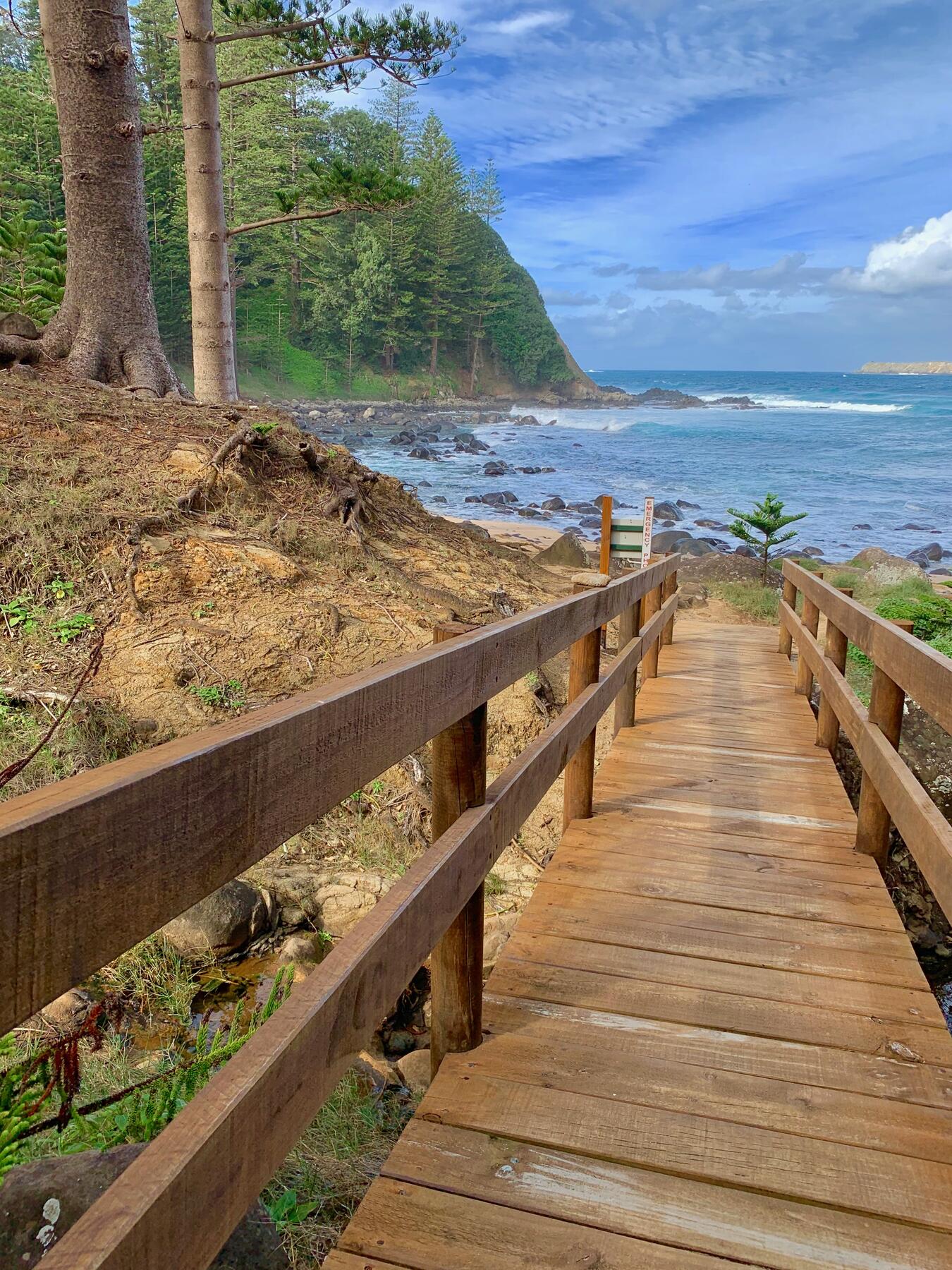 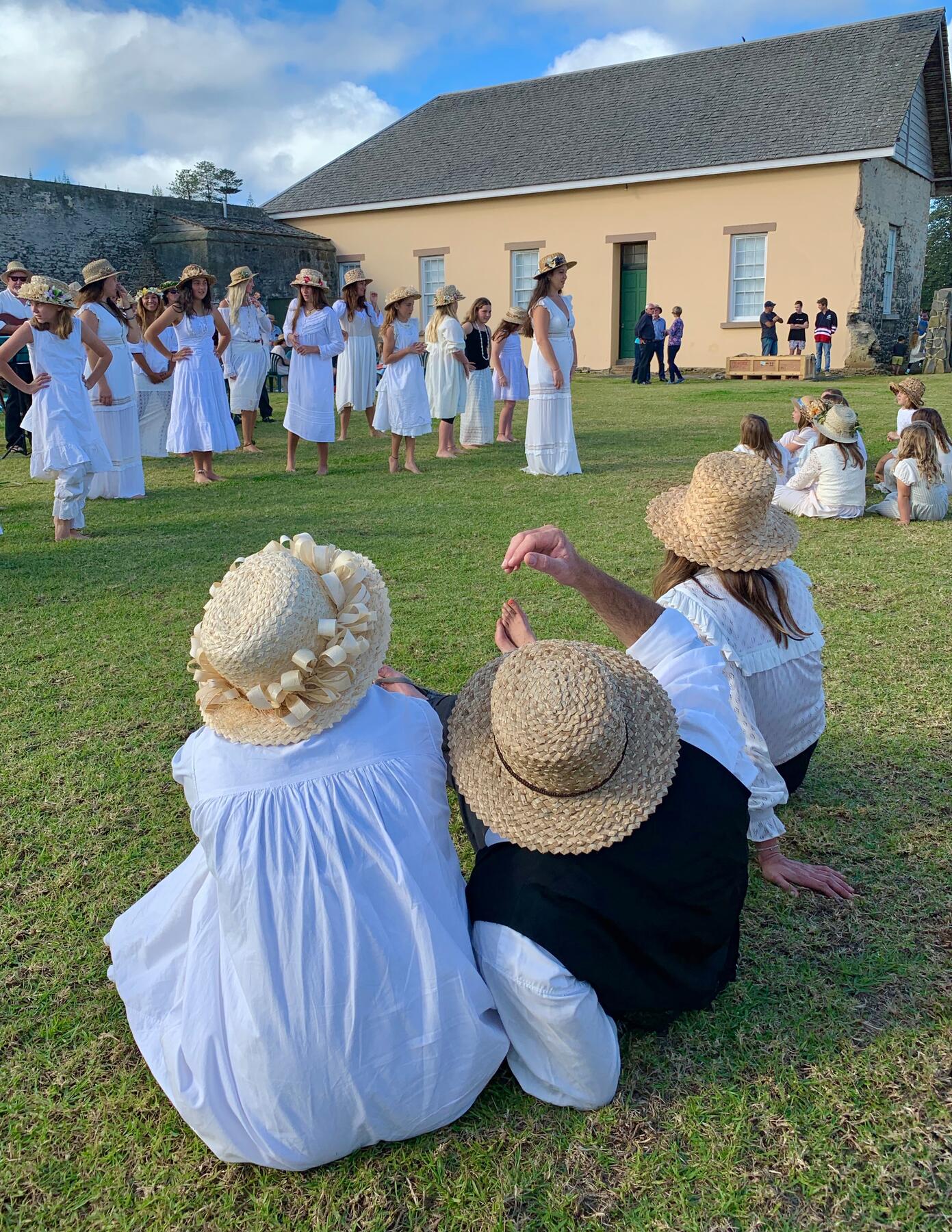 The timing was serendipitous for the cramped Pitcairners; a few months later, 194 passengers arrived on Norfolk aboard the Morayshire, inhabiting the ruined dwellings that once housed the penal colony’s governor and officers. There were major growing pains, however; its subtropical climate (similar to, say, North Carolina) was significantly colder than Caribbean-like Pitcairn, and a dramatically new lifestyle had to be adopted as the seasons clicked. Although a large group returned home to Pitcairn after only 18 months, the majority of newly minted Norfolk Islanders stayed, and the population steadily grew as the scrubby bump in the sea proved an appealing stopping point for whalers.

A bit of a misnomer, since its settlers arrived aboard the Morayshire, Norfolk’s Bounty Day commemorates the arrival of the eight families—the direct descendants of the Bounty’s mutineers—who landed on the island in 1856. Originally called Anniversary Day, the current celebration is held on the Sunday closest to June 8th, and while it’s technically not a national holiday—as the island was incorporated into Australia’s state of New South Wales in 2016—it’s treated with the utmost seriousness by its inhabitants.

The day’s events begin with a reenactment of the Morayshire’s landing, complete with rowers and onlookers dressed in traditional white cottons and linens. After, a parade across Kingston—the site of the old penal officers’ quarters—takes celebrants to the large cemetery where their forefathers and foremothers are buried. Hosted tea at the governor’s manse comes next, and then the island’s citizens gather by family—think Harry Potter’s houses—for commemorative photos and a series of good-humored competitions, including handsomest beard. A massive outdoor banquet caps off the day, held among the penal colony’s open-air ruins, which showcases the islanders’ mixed Tahitian heritage through traditional dancing, and a hardy selection of local dishes like boiled hihi cockles and mudda (banana dumplings in coconut milk)—both very much acquired tastes to the uninitiated. 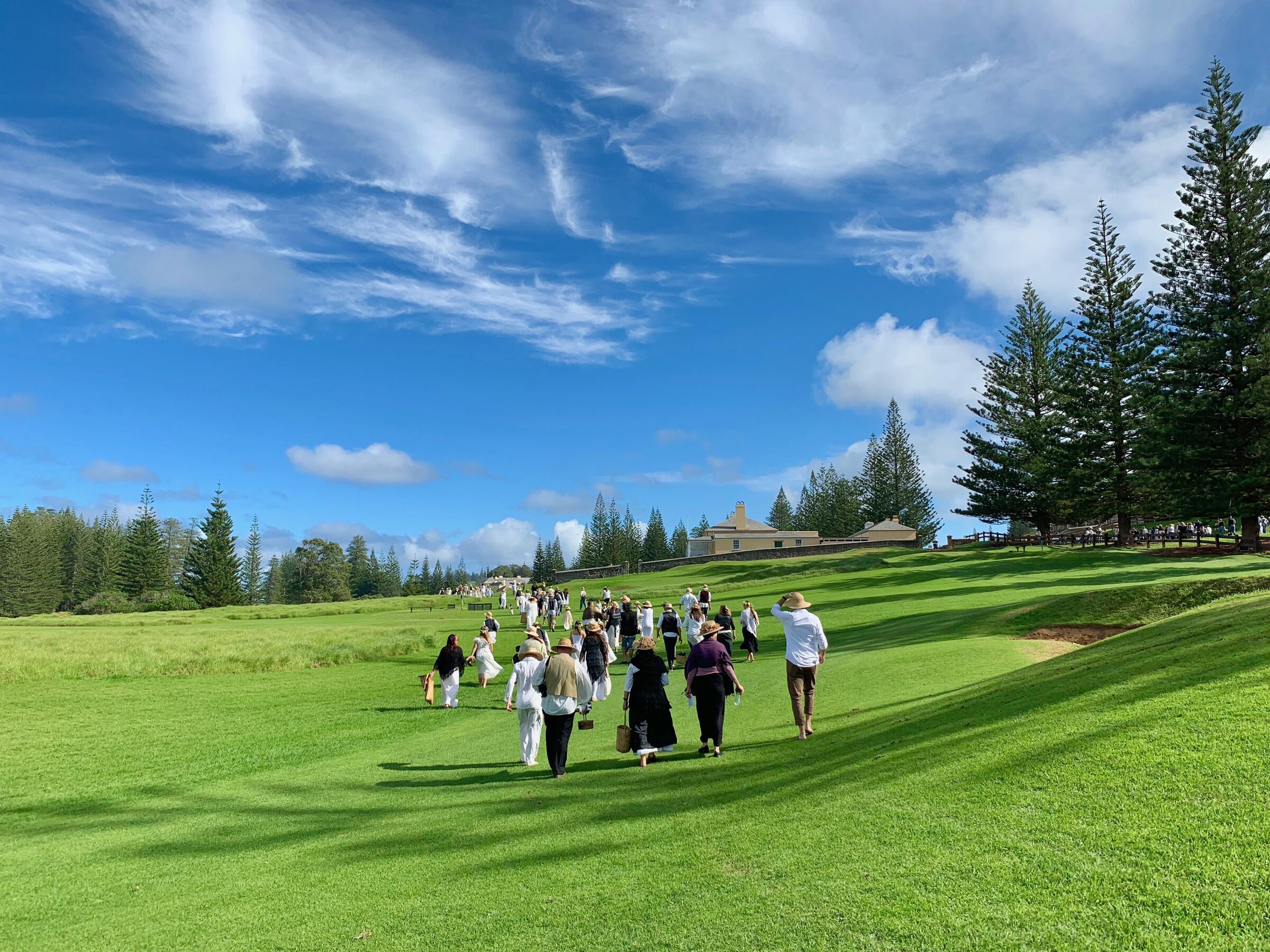 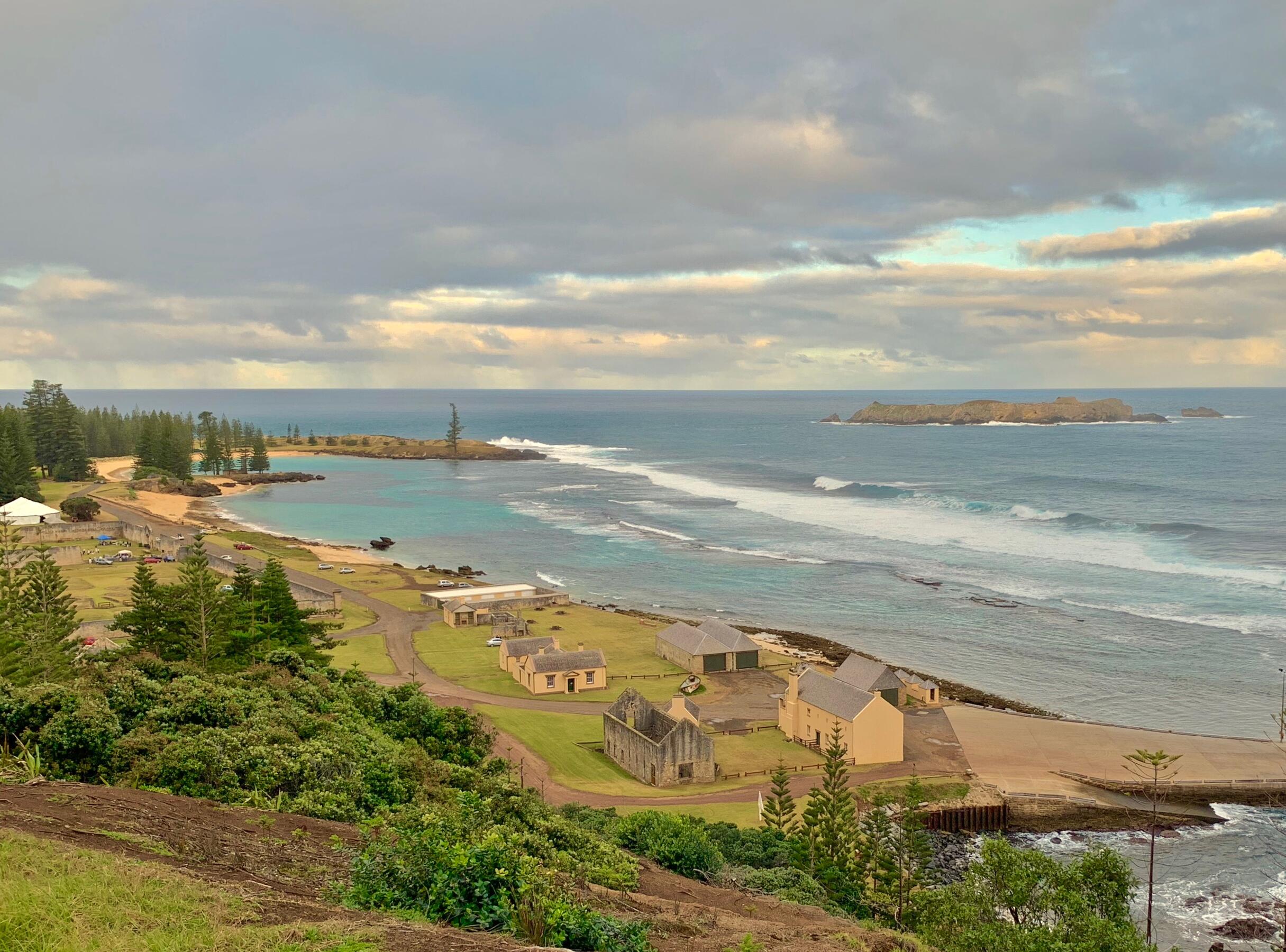 A century after the Pitcairners arrived on Norfolk Island, the United States forced Australia to construct a landing strip on the island during the Second World War to better launch their aircrafts across the Pacific Ocean stage. The tiny airport proved a boon to leisure travelers in the decades that followed, shuttling travelers in from Sydney, Brisbane and Auckland; many of whom had a cultish obsession with Fletcher Christian or were nautical history buffs. Interest in the Bounty has waned in recent years, but the island remains not only a scenic respite from big-city life, but a delightful throwback where, for example, GSM cell service isn’t yet operational, so—in case you were wondering—locals really do use a paper phonebook.