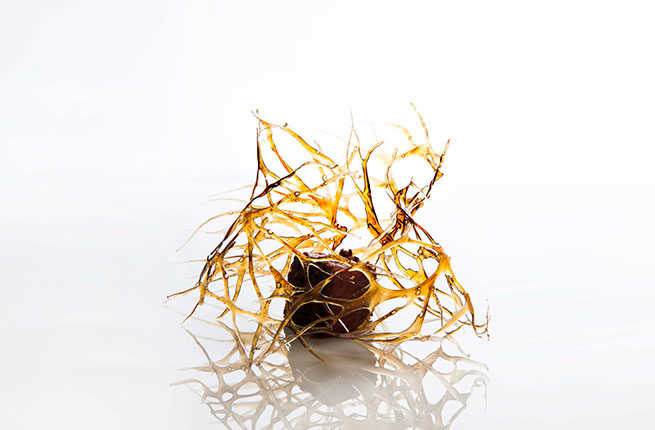 When I boarded the plane for Australia, I had two goals in mind for my trip: Figure out what Australian cuisine is all about, and eat a kangaroo. Like bison, kangaroo seems to evoke a place, and it was this vision that I packed with me on my two-week trip to Australia. I started my tour looking for meals that would explain what Australian cuisine was and hoping to eat some kangaroo. The cultures that make up Australian food landed on the continent by boats that traveled from faraway places—China, Indonesia, Malaysia—and it’s this blend that creates a diverse Australian cuisine. Add native ingredients—like kangaroo—that you won’t find anywhere else for a culinary experience like no other.

Insider Tip: Kangaroos are the epitome of free range and can only be harvested in the wild. Because the animals range far distances grazing solely on bugs and grasses, the meat is very lean—only 2% fat—and it’s high in iron and omega-3. The Australian government sets strict quotas on commercial collection of kangaroos (15-20% a year), which ensures that only the most common and abundant species are harvested. 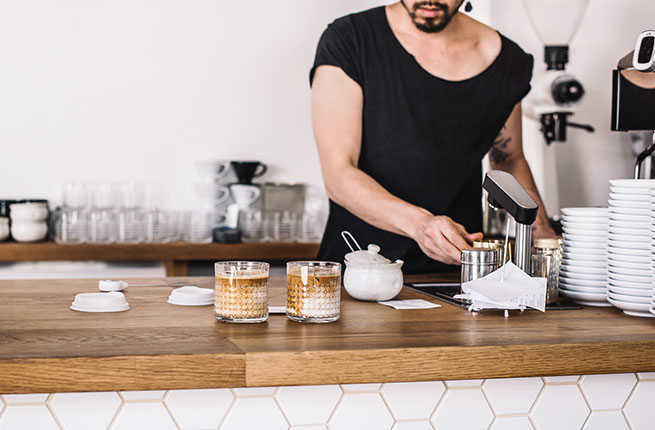 I landed in Sydney at seven in the morning and rolled my orange suitcase behind me looking for coffee. I found it at Edition Coffee Roasters, a Nordic-Japanese fusion café in the Darlinghurst neighborhood. Until I walked through their door, I had forgotten that Australians take their beans seriously. When I asked for a side of milk I was told, “No.” Actually they were much nicer, but still firm. “We recommend you drink our coffee without milk.” It was light and fruity. It didn’t taste like coffee, more like a black tea that evoked the spirit of coffee. 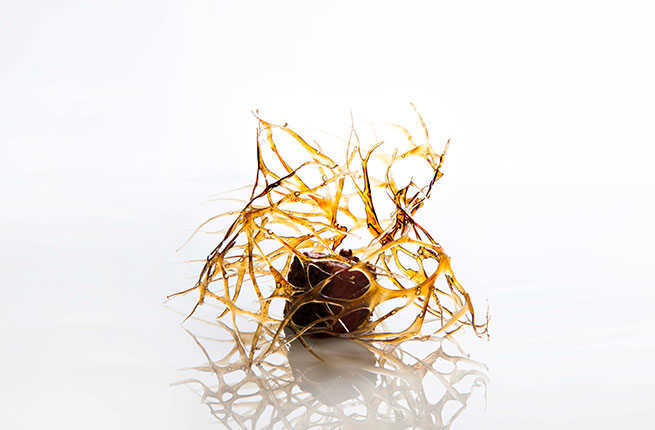 My first real meal in Australia was at Sepia, which serves Nordic-inspired Japanese food using French techniques. This melting pot of cuisines turned out to be a running theme of my trip to Australia. The meal, mostly seafood, was visually stunning—dollops and twirls, French sauces, and edible flowers—and subtle with clean flavors. 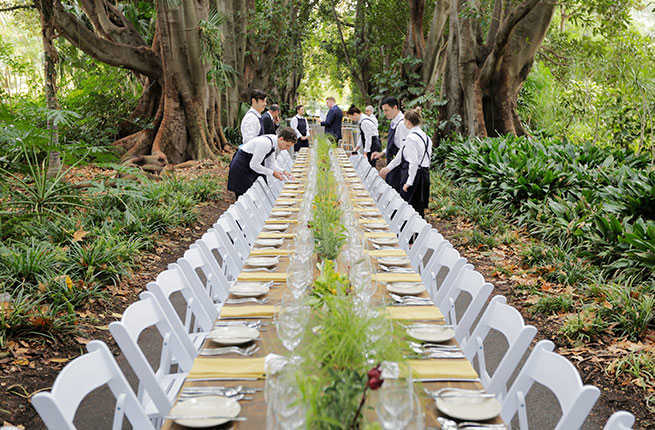 The Adelaide Botanic Garden opened in 1857 and its design is based on the Royal Gardens in Kew, England and Versailles, France. In the center of the gardens, next to a lake, is the Botanic Gardens Restaurant where chef Paul Baker serves food created with ingredients harvested from his 126-acre backyard; his only competition is the birds. Each morning he tapes a shopping list to the wheel of his golf cart and zooms around looking for what’s “in stock.” Baker served me my first kangaroo, his version of native pastrami. Chef Baker brines the kangaroo for 48 hours in paprika, native pepper berry, and coriander seeds, then he crusts the meat using hot smoke and air dries it for two weeks. The meat was dark and tasted like venison or turkey thigh. Also on the plate were tangy pops of pickled muntries (local cranberries), sweet circles of beetroot purée, and quinoa crisps. 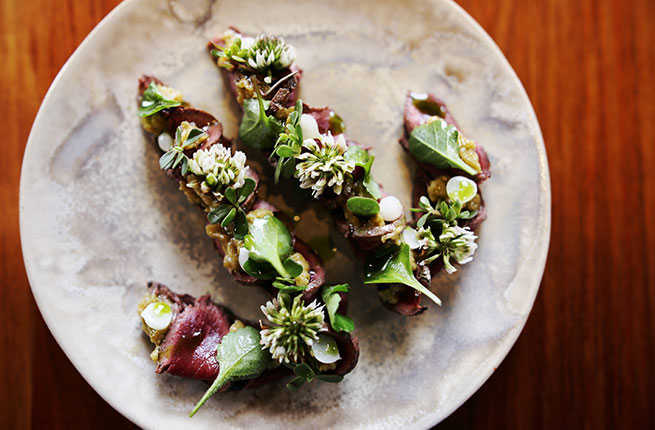 If any one chef is considered responsible for educating the world about indigenous Australian ingredients, it’s Jock Zonfrillo. My meal was a collaboration between Zonfrillo and chef Matt Orlando of Amass restaurant in Copenhagen, held in a giant white tent that had been miraculously turned into a forest. When the two chefs introduced their meal at Restaurant Orana, they urged us to feed our neighbors and use our hands, which is why they didn’t give us silverware or serving utensils. Maybe this spirit of the outdoors was Australian cuisine? I didn’t eat any kangaroo, but there were briny cockles freshly harvested off of Goolwa beach and slow-roasted Suffolk lamb that was so large I felt like a caveman eating it with my bare hands. 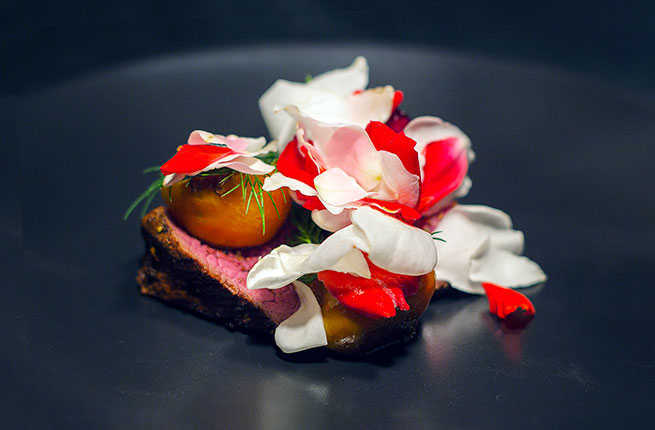 Part of Adelaide’s charm is the Barossa Valley, a rich wine region that lies about 30 miles away from the city center. Hentley Farm, known for both its wine—winemaker Andrew Quin was named Barons of Barossa 2017 Winemaker of the Year—and its young chef, Lachlan Colwill—who was recently a guest chef on MasterChef Australia—evokes the very best of Napa or Sonoma. The walls of the restaurant are covered in river rocks with candles dotted around the room, and the ceiling has rough timber planks. But the rustic environment is the opposite of the elegant plates that leave the kitchen. The meal was one surprise after another, and with no menu to refer to (you don’t get one until you leave), each bite is a mystery until you put it in your mouth. The dishes are incredibly inventive, like seared Bluefin tuna, toasted sunflower seeds, and chicken liver parfait topped with iceberg lettuce coated in cured egg yolk (which takes two weeks to make). Lemon juice and zest help the flavors blend and pop, even while you’re somehow still wondering what it is you’re eating.

Insider Tip: Although I missed it, Colwill serves kangaroo. “We use Paroo kangaroo loin and BBQ it over redwood and old port barrels,” says the chef. 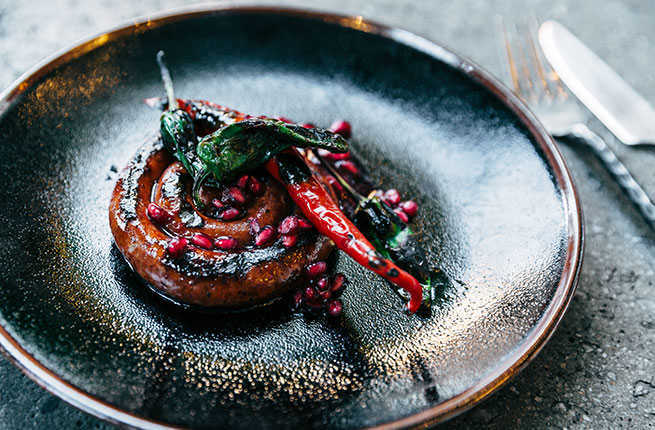 Africola is a South African restaurant in Adelaide. It was not quite the place to have kangaroo, and instead, I was served bugs, wagyu beef, and seafood curry. After the bugs, I tried sai krok isan boerewors with monkey gland sauce—words that meant nothing to an American. Thankfully I got a translation before I took a bite: fermented pork sausage on a traditional spicy barbecue sauce made from onion, garlic, ginger, tomato, ketchup, wine and more, but definitely no monkeys.

South African food, while not Australian in any way, seemed to be the first meal that actually felt right at home. Bright, spicy flavors grilled in open fires. 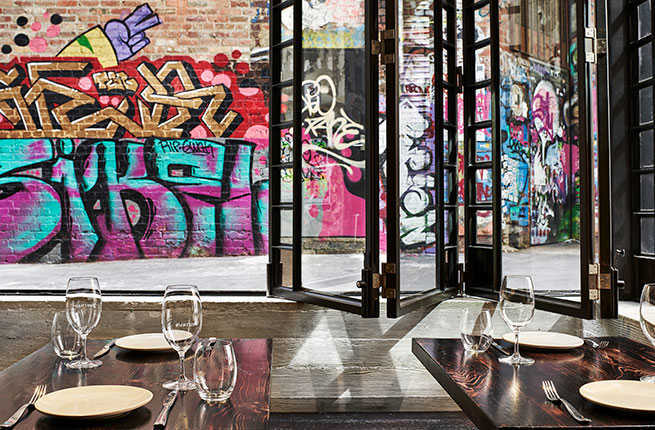 At Pastuso, a Peruvian restaurant in downtown Melbourne, chef Alejandro Saravia introduced me to alpaca meat, which felt kangaroo-ish. Alpaca has long been a part of the Peruvian diet and for Saravia, it has important symbolism for his Andean culture. His Alpaca tartar is made from a strip loin from the alpaca. Saravia dry ages the lean meat, which is wrapped in cheesecloth to keep the meat moist. When plated, the tartar is paired with Peruvian caper berries and a light black garlic aioli to bind the meat. 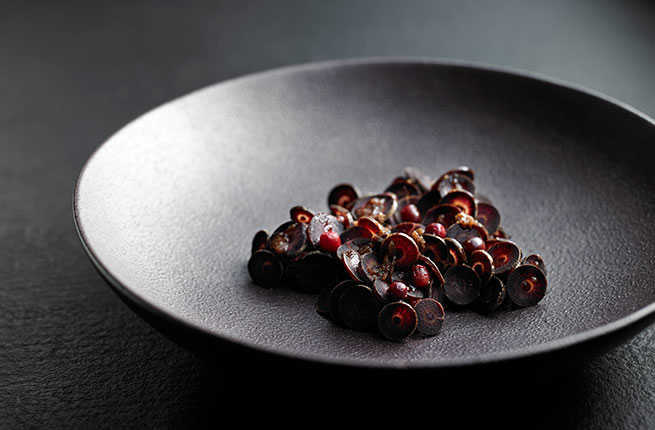 According to many, the number one restaurant in all of Australia and number 33 on the World’s 50 Best list is Attica, located in a suburb of the vibrant city of Melbourne. Chef Ben Shewry cooks modern Australian cuisine, which is yet another misleading phrase on my search to learn more about how people eat here in Australia. The plates that come out of Shewry’s kitchen are full-tilt theatrical events. I’m served kangaroo, which thrills me. The meat is raw and colored a vibrant red color and covered in round discs of bunya pine nuts, which come from Shewry’s nearby farm. At the end of the meal, I’m taken to a tiny garden behind the kitchen where I chat with a chef and cut down two perfect tulips. Later, the flower petals are served to me as a sweet sandwich.