If Disneyland is the happiest amusement park, Universal the most cinematic, and Six Flags the most thrilling, then Vietnam’s Sun World has got to be the most ¯\_(ツ)_/¯.

It was raining in Sun World. That was the first sign that this place had the tendency to be confusing—but I didn’t know how confusing just yet. In fact, I didn’t know much of anything about Sun World, only that it was a Vietnamese pseudo-Disneyland constructed by a man who accumulated a vast fortune by selling instant noodles in Ukraine. Oh, and also that this park houses one of the most Instagrammable sights in all of Vietnam: The Golden Bridge.

Sun World occupies large swathes of the Ba Na Hills, just outside the city of Da Nang and about an hour’s drive from Hoi An. Due to the elevation, the climate here is far more subdued than the often-oppressive heat and humidity of the surrounding areas—so much so that back when the French occupied Vietnam, they built their summer houses in these hills and created their own make-believe alpine escape. Now, it’s home to a different kind of fantasy.

I laid eyes on the entrance to Sun World—it resembles the imperial city of Hue (the real one is about a two-hour drive from here) and sits at the foot of towering green peaks that, on this day, were hidden behind dark storm clouds. Beyond the gates and up an escalator is a replica of Hoi An’s ancient quarter.

But, this down here—the replica imperial city of Hue and the ancient quarter of Hoi An—this is just a diversion. Just a grand entrance. It’s merely something to look at on the way to the main attraction. Which is way up there. Beyond the dark storm clouds. And there’s only one way to get there: brave the longest non-stop cable car in the world.

I crammed into the gondola with about eight strangers. The air vents were closed to prevent the rain from dripping down on us and soon the fog of our exhalation clouded up the windows. The obstruction of the views may have been a good thing because if you’re afraid of heights, which I usually am, this is exposure therapy at its cruelest. And, perhaps due to the obstructed views, I was just fine. Or, perhaps I was fine because I was distracted by the woman sitting across from me who was so terrified that she couldn’t stop vomiting. I spent the entire ride (and it took nearly 30 minutes) worrying not that I’d plunge to my death in these verdant valleys, but that I’d be splashed by rogue chunks of digested corndogs and bile. Luckily, each gondola comes fully equipped with a supply of barf bags. This clearly happens a lot.

I’ve been told that when the sky is clear and the windows defogged, the views are staggeringly gorgeous. And anyone without the acrophobia felt so acutely by me (or even more acutely by my retching neighbor) will have a glorious time. In fact, the kids holed up in here were overjoyed—they ignored the purging horrorshow and instead jammed their faces against the windows, trying to see through the clouds. They exclaimed with joy something in Vietnamese that I took to be some sort of “Land ho!” statement. Because, appearing amid the clouds, was our destination.

Way down below, at the base of these hills, were the reconstructed local wonders. But, way up here, in the thickness of the clouds, it’s a whole new world. It’s… France? Yeah, it’s France all right. There’s the Moulin Rouge. So… Paris? But, there’s also a London black cab, so, I don’t know what this is. I guess it’s a conglomerated fantasy of what Paris might be. There are castles, there are chateaux, there’s a cathedral, and they’re all populated by Eastern Europeans that I assume are on some sort of Vietnamese artist visa that explicitly requires them to excitedly exclaim “BONJOUR!” to every passerby. 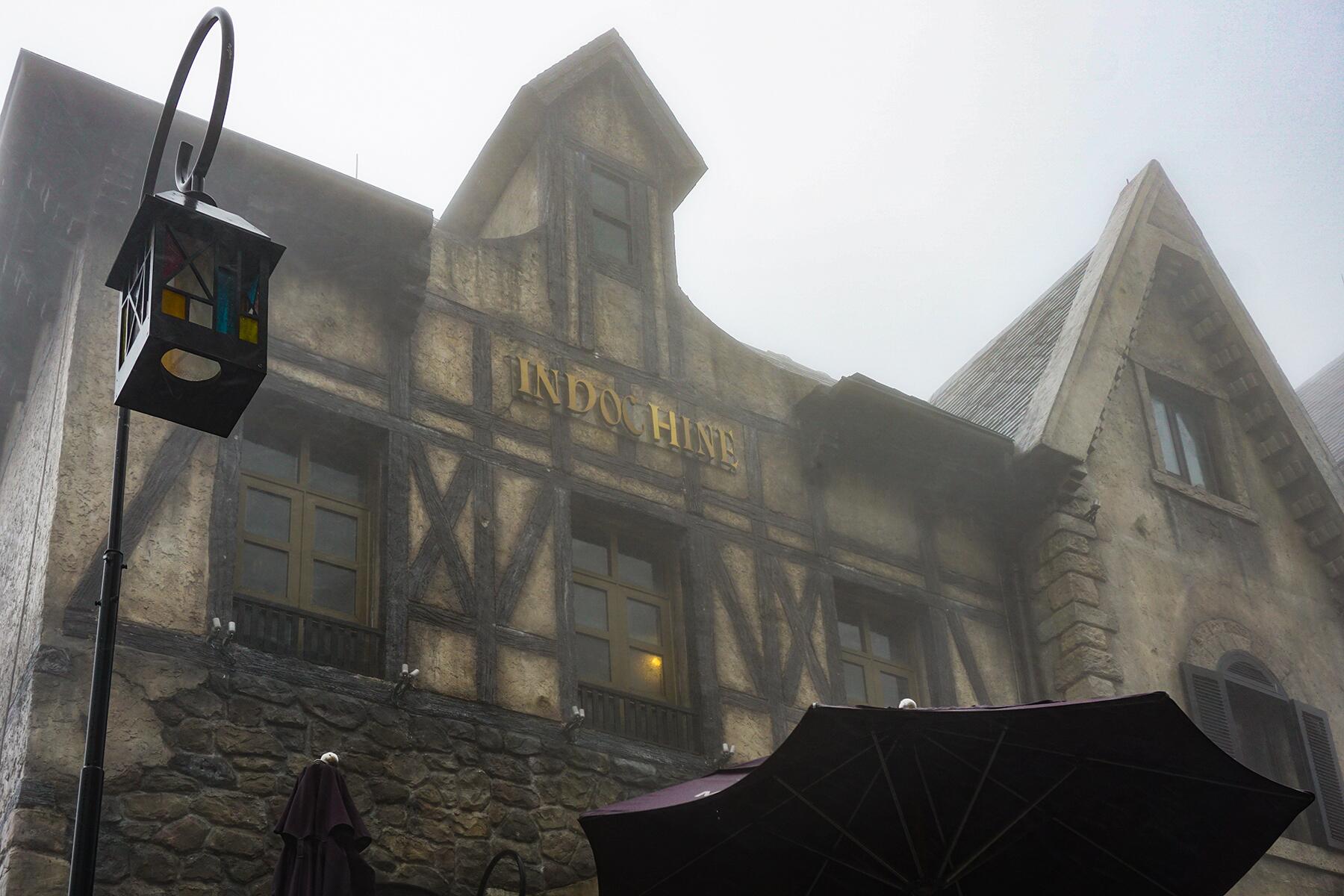 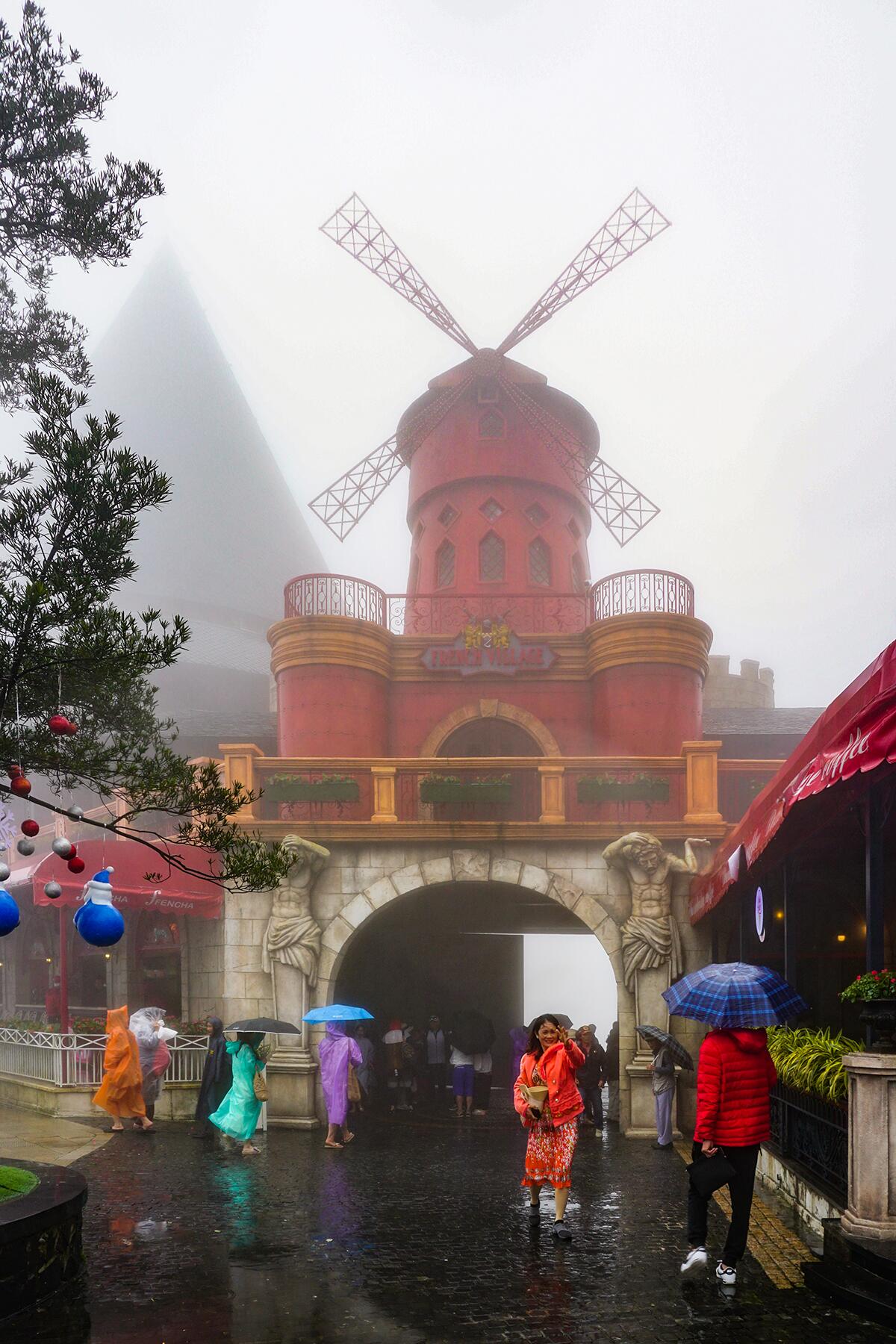 The rain pelted down and everyone scurried to find neon-colored slickers and then wrapped in plastic, families scattered throughout the town to gawk. They peered through the fog at the strange wonders along these cobbled streets, looking like fluorescent tourists in a drab Les Miserable world. They sat in restaurants drinking pinot noir and dining on steak aux poivre while La Vie en Rose blasted over speakers and they shopped at stores selling baguettes and berets. It was delightful. But, it was also very wet, so I ran for cover inside a giant arcade, the Fantasy Park.

Not only had I gone inside but, from the looks of it, I’d gone underground. Deep underground—down where molten lava flows alongside oversized mushrooms and pre-historic giants roam. This Fantasy Park is meant to be some form of Jules Verne wonderland with a soupçon of copyright infringement in the form of a cartoon character clearly derived from Indiana Jones. In fact, there’s a lot of Spielberg in here—there’s an area called Back to Jurassic, which is purely an exhibit of barely-functioning animatronic dinosaurs. 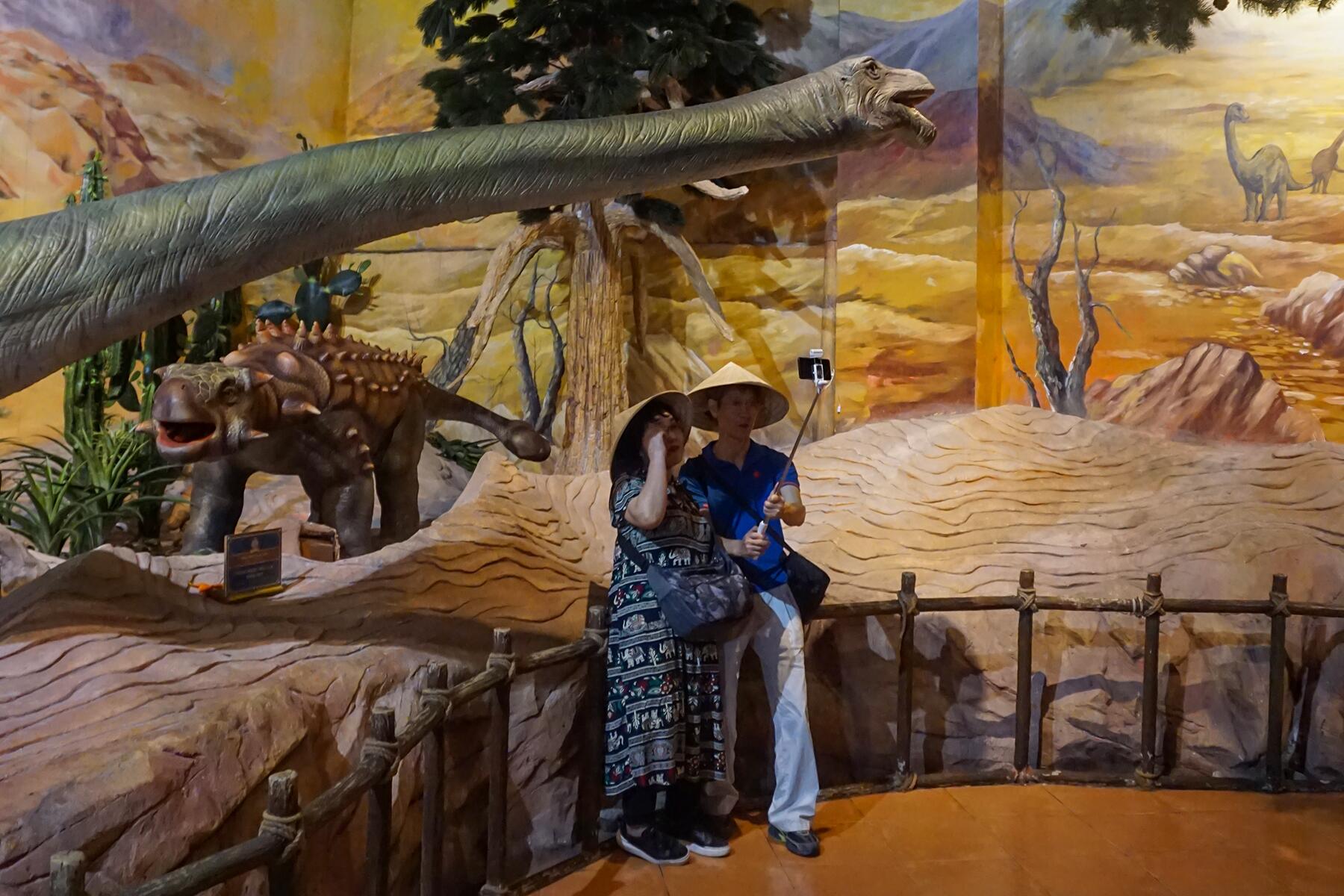 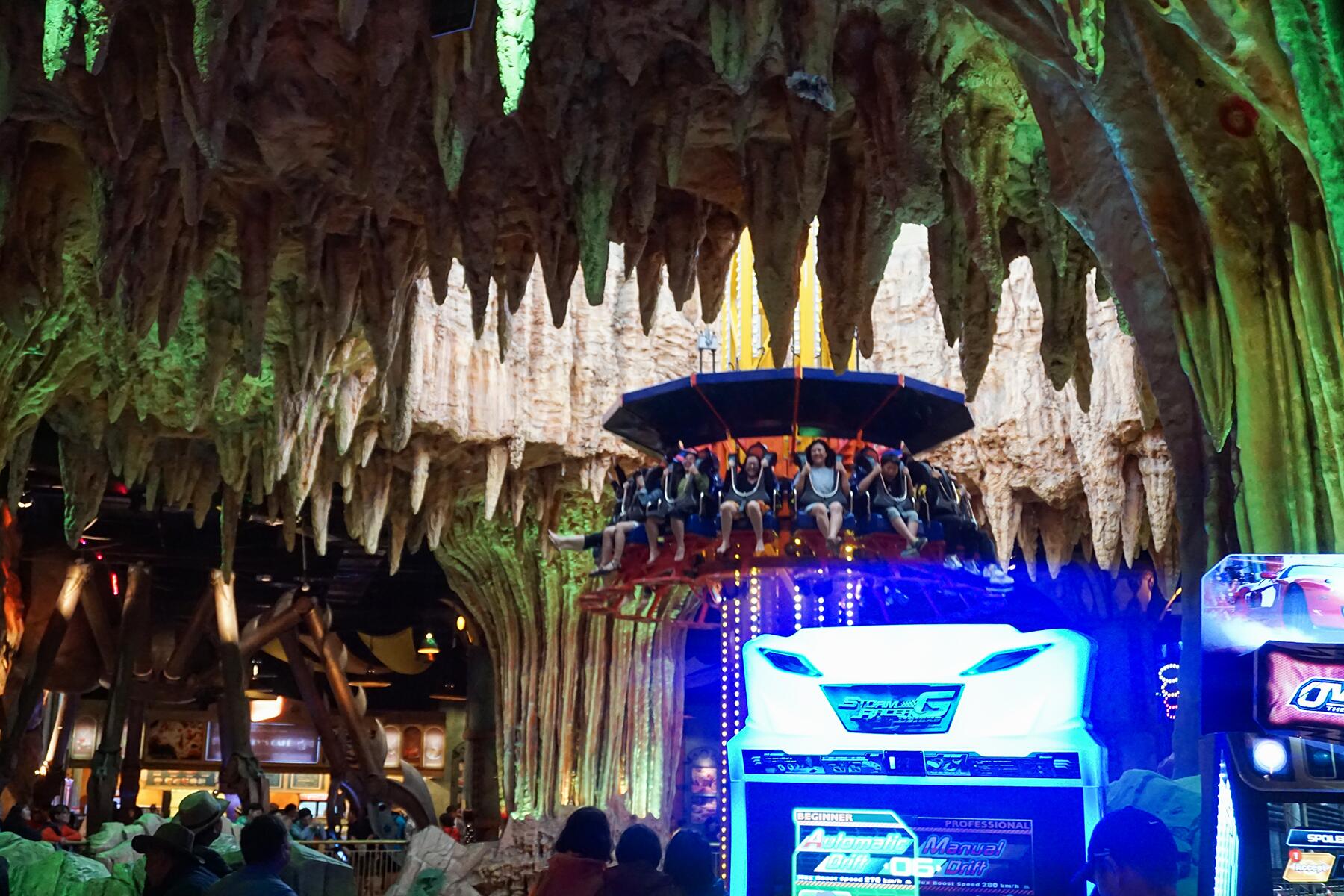 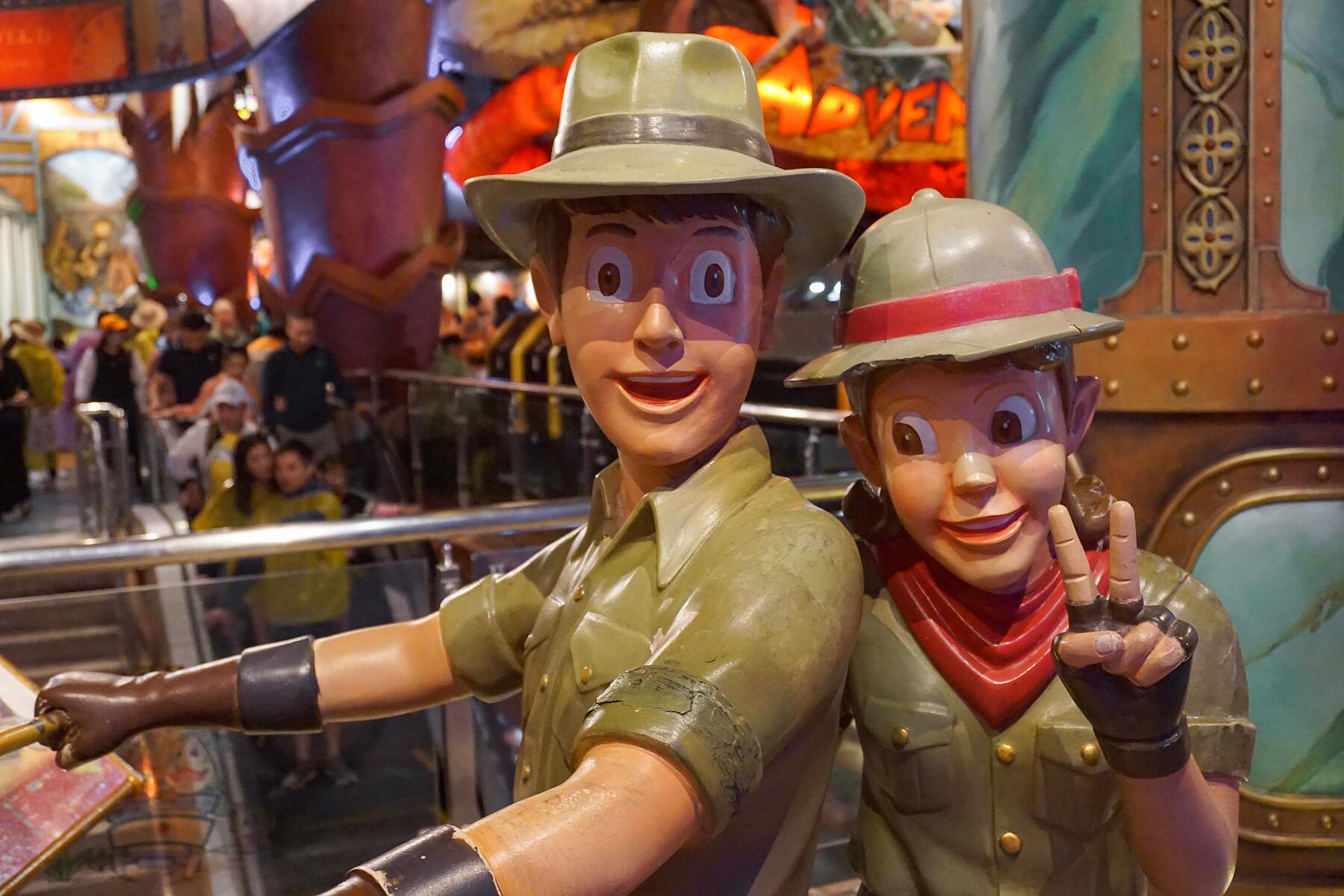 1. Welcome to Jurassic Park museum!2. If the cable car didn’t make you sick, this drop tower might.3. This is definitely not Indiana Jones.

There are arcade games and kiddy rides throughout this multi-story underground lair, including the Extraordinary Adventure, which features that animated faux-Indy, as well as the redundantly named Cemetery of Death. The centerpiece attraction is a drop tower wherein riders journey from the above-ground to, presumably, the center of the earth all while whiplashing over and over until invariably someone ends up as nauseous as that acrophobe on the cable car.

Altogether, it has the air of a summer carnival more so than an amusement park, but children ran through it with Cheshire Cat smiles and gleeful laughter, so I quickly realized that I, a childless man in my late thirties, am not really the key demographic. So, I instead followed the signs to something that’s surely made more for me than children—the Wax Museum.

It was certainly confusing to find a wax museum here—it didn’t follow any of the previous themes of Sun World, of which, admittedly, I could only think of two: 1. Grand reproductions of other places; and 2. Francophilia. Perhaps, Madame Tussaud was the inspiration and the loose connection to the rest of this place? I honestly didn’t care, because I love a wax museum. 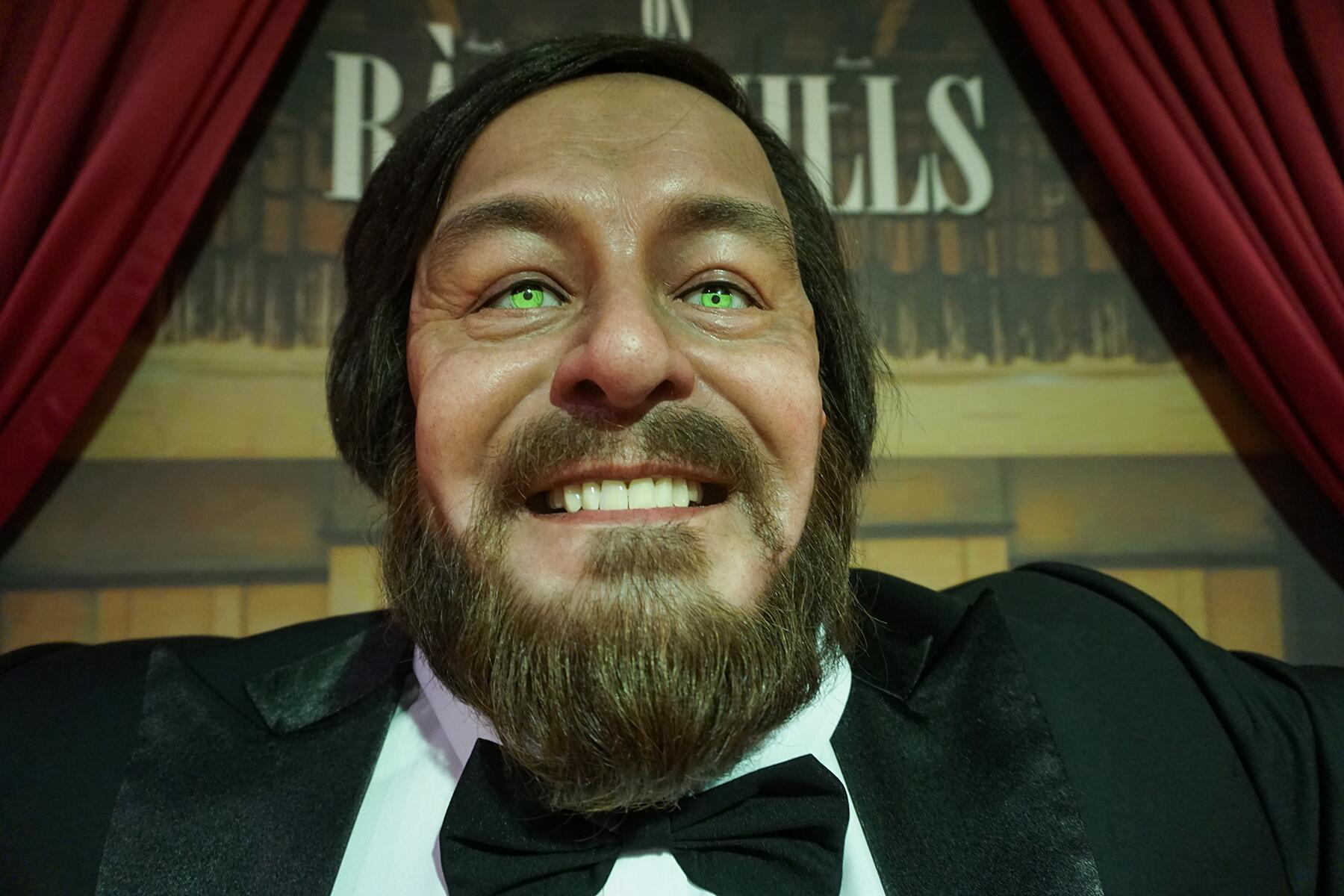 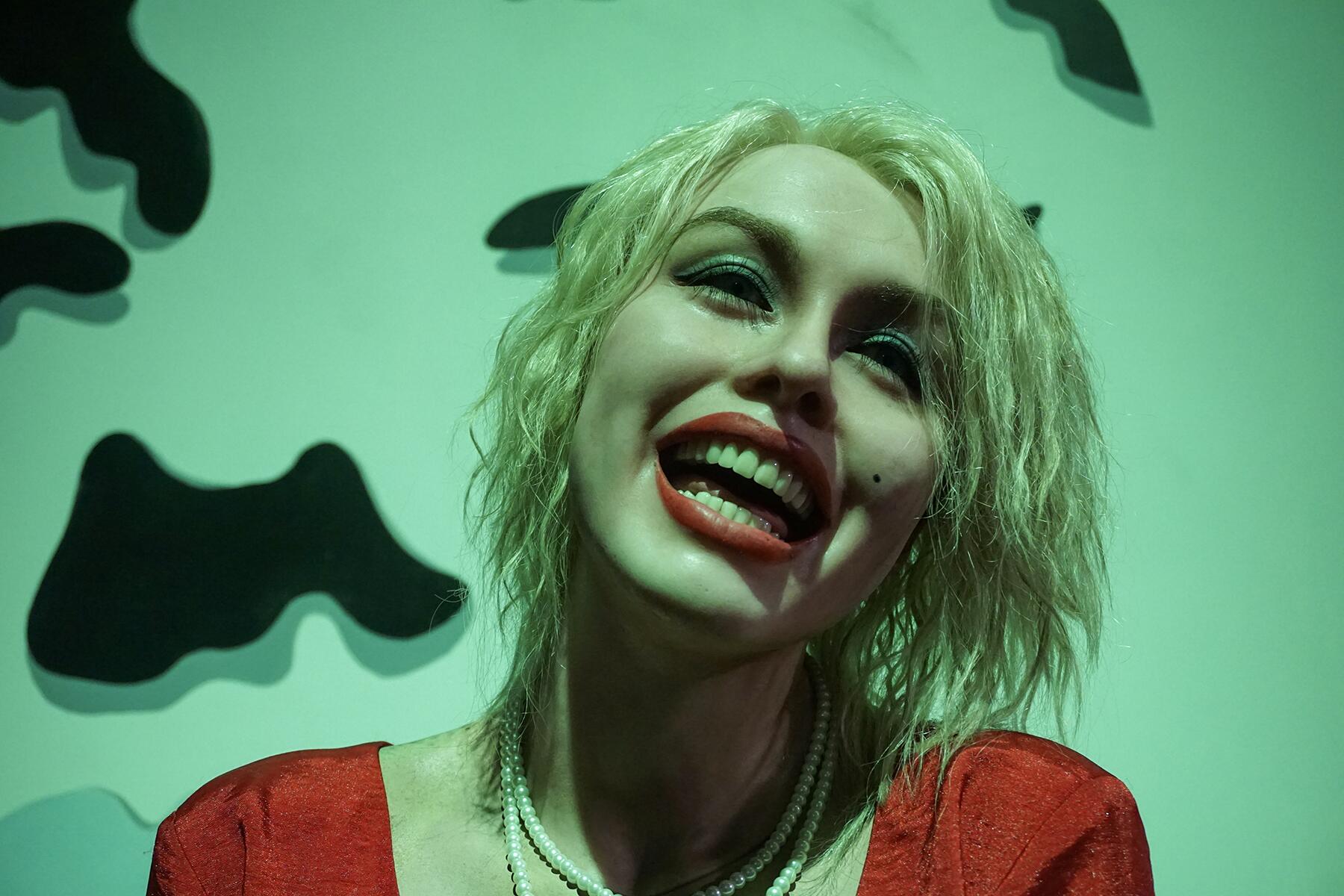 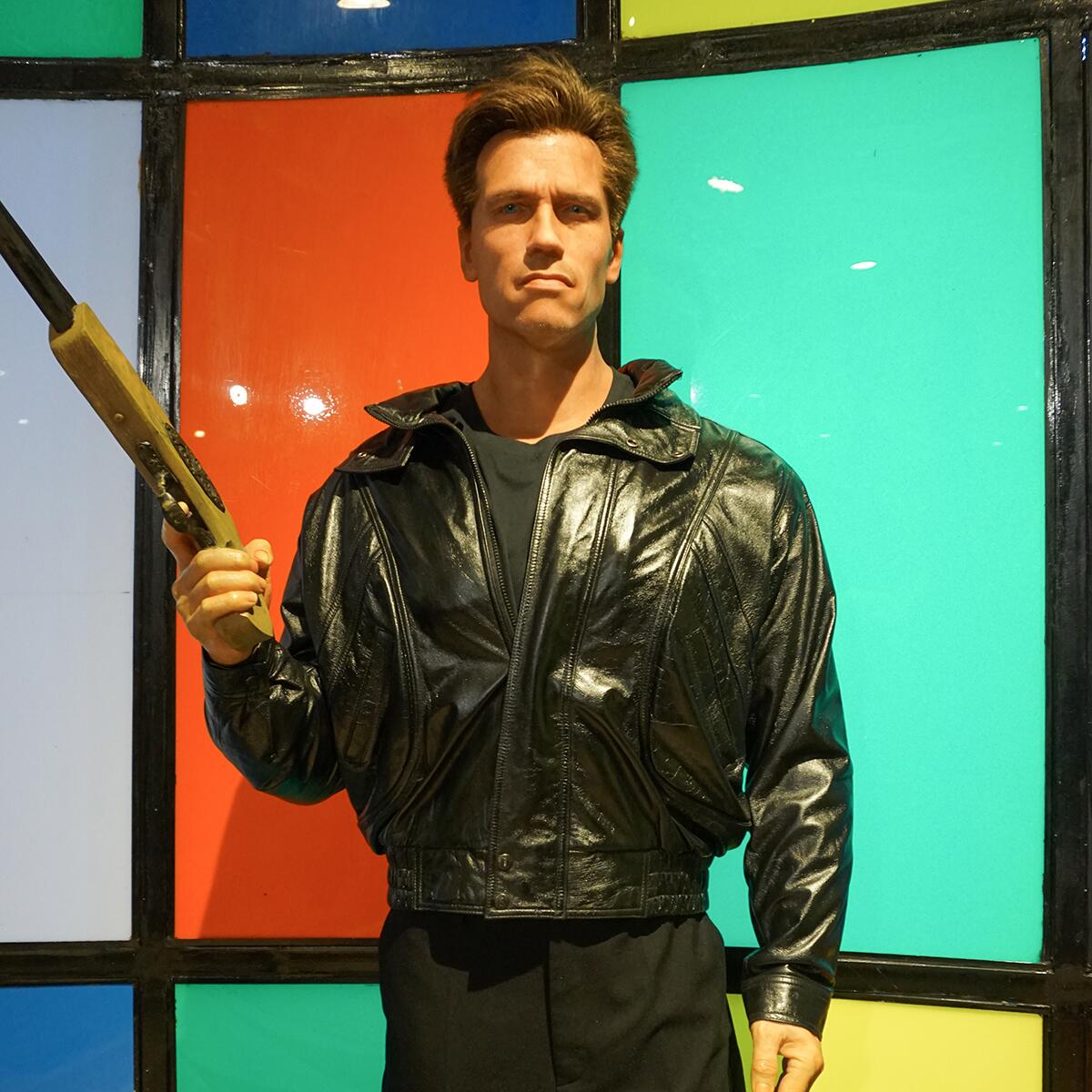 Immediately upon entering, I was greeted by Nicole Kidman and Steve Jobs. Weird combination, but OK. But then came a coterie of celebrities in varying degrees of distress. Pavarotti looked to have been conquered by the White Walkers, Marilyn Monroe appeared to be desperately chasing the dragon, and Arnold Schwarzenegger seemed to have overdosed on diet pills. Prince William grinned a psychotic smile and Kate’s eyes pleaded like a hostage for help, while the Queen, wearing Donald Trump’s wig and Helen Mirren’s face, limply clung to a purse that the museum must have forgotten to give her. Lastly, Trump was there, standing on a stage with Vladimir Putin (which made sense) and Nelson Mandela (which did not). I fled the exhibit and wandered to the most famous monument in Sun World.

This is why I was really here—I suspect this is why any American is really here in the Ba Na Hills. For the Golden Bridge. The bridge arrived suddenly, out of nowhere, in 2018, as though it had been discovered by archaeologists. Two giant hands, ancient by all appearances, holding a magnificently gilded pathway. Surely, you’ve seen it on your own Instagram countless times. When I first saw a photo of it, I thought it was just another impressive bridge somewhere recently built in Da Nang—like the Dragon Bridge, perhaps. But, nope. It’s here. In Sun World.

Despite the steady downpour, an army of selfie-takers marched forth. Even in this gloom, it was a striking thing. The hands emerged from the fog, like the ghostly specter of a dead goliath, clinging to a glittering mesh of golden metal. While crossing it, you can’t help but feel as though you’re in the magical land of a fairy-tale that’s not yet been written. It, alone, is worth the price of admission (which, by the by, is $30 for adults and $25 for children who are between 3’2” and 4’6” in height—kids under 3’2” are free).

The journey through Sun World sounds like the fever dream of a syphilitic Jules Verne, so surely, you’re asking yourself right now whether or not you should go. The answer is an undeniable and emphatic: YES. Sun World is a strange and confusing place, but it’s charming because of—not in spite of—its landscape of non-sequitur peculiarities. The confusion is exactly why it’s so surprisingly entertaining.

Like any good amusement part, there’s a hotel at Sun World Ba Na Hills, but don’t stay there. It’s really quite pointless as there’s no reason to spend more than a day at the park. Instead, stay in Da Nang. An excellent option is the Sheraton Grand Danang Resort, especially if you’re traveling with a family. The hotel was tailor-made for children, with both indoor and outside play areas, and a dedicated kids pool.

But, adults will be happy, too. There’s a resort-feeling to the property, with a massive infinity pool, cabanas, and beach access. Most rooms have balconies and gorgeous views of the sea. There are dining options aplenty, but Table 88 is particularly good thanks to Helen Le, a Da Nang local, whose popular YouTube channel showcases Vietnamese recipes. Le has curated a small selection of menu items, including a massively tasty pho that alone is worth a stop at the hotel. I recognize the sacrilege of advocating for someone to stop off for a meal at an American chain hotel while on a trip to Vietnam—but, it really is that good.

The hotel is also an excellent basecamp location to explore Da Nang and nearby Hoi An (the Sheraton has a free shuttle to take you to the real ancient town), which is only 30 minutes away by car. The Marble Mountains are only six minutes away, My Khe Beach 15 minutes, the giant Lady Buddha 30 minutes, and Sun World Ba Na Hills an hour away.