Blend Beijing and Tokyo, shrink it down in size, and add a dose of island ambiance and you’ve got Taipei. Taiwan’s capital city is compact and easy to navigate by metro and inexpensive taxis. In a single day you can munch on rice balls (fantuan) for breakfast, spend the afternoon hiking and soaking in hot springs, and be back in time for rooftop drinks. Squeezing in museums, temples, and plenty of good food, here’s how to make the most of three days in Taipei. 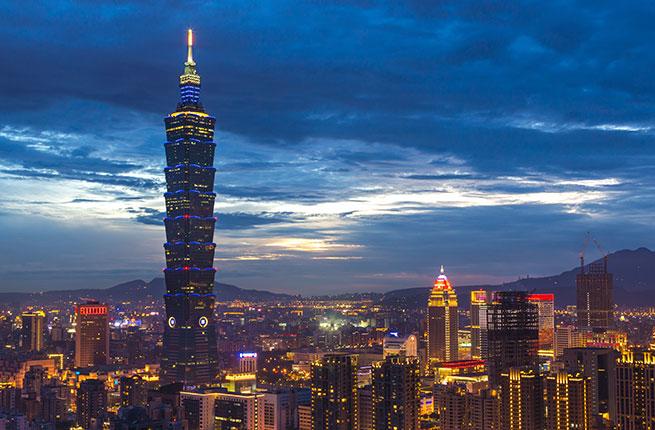 Nearly all nonstop flights from North America to Taipei depart between 1 and 2 am and arrive the next day between 5 and 6 am. These—along with most other international flights—land at Taoyuan International Airport, 30 miles outside the city center. If you’ve flown into Songshan, you’re ahead of the game; this downtown airport is so central you can stroll from baggage claim to café in just 15 minutes.

Songshan district hotel Les Suites Taipei Ching-Cheng has 84 rooms but feels more intimate thanks to thoughtful amenities like homemade cookies and coffee and tea in the sitting area and a weekday happy hour with complimentary drinks and canapés. The hotel is a stone’s throw from metro lines 1 and 3 at Nanjing-Fuxing, and your room keycard doubles as a metro card.

Get your bearings with a 30-minute stroll to lunch at Addiction Aquatic Development (No. 18, Alley 2, Lane 410, Minzu Dong Lu, near Lane 370 Longjiang Lu). You’re thinking: Shouldn’t I eat Taiwanese food? But Taiwan was under Japanese rule from 1895–1945 and its food remains a part of Taiwanese culture. Addiction Aquatic has the best-value sushi in Taipei, and it’s ultra fresh. At the stand-up sushi bar, go for the colorful mixed nigiri—12 pieces, plus sweet, creamy uni, and tamago to finish.

After a quick bite, grab a taxi for the 25-minute drive to the National Palace Museum. This museum and the Palace Museum inside the Forbidden City in Beijing were once one, but the collection was divided when Chiang Kai-Shek's nationalists left mainland China and took with them 700,000 pieces. The collection spans 8,000 years, from Neolithic times up to 1912, the last year of the Qing dynasty and the end of imperial rule in China.

It’s time for a proper Taiwanese eating experience at Raohe Night Market in Songshan (Raohe Jie between Section 4, Bade Lu and Fuyuan Jie). Night markets are the place in Taiwan for xiaochi (literally “small eats,” an important food category in Taiwan) and the crowds are a testament to this. Bypass the clothing vendors and head straight for the food. Stinky tofu (fermented tofu with a strong odor) is not to everyone’s liking, but black pepper buns (hu jiao bing)—pork, black pepper, and green onion in a crunchy bun fresh from the oven—are more agreeable to the nose. If you only have room for one dish, make it the classic oyster omelet. 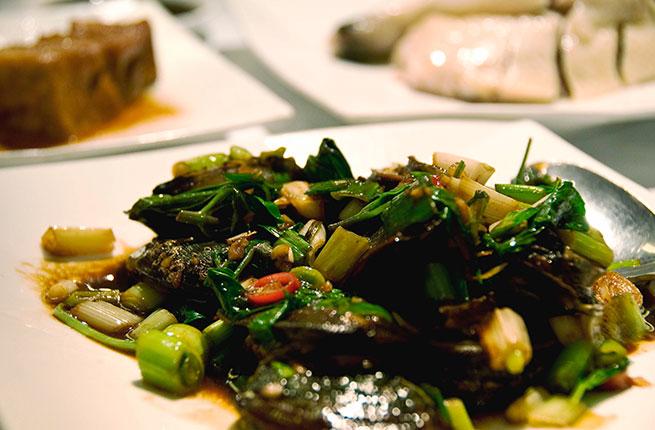 To leave Taipei without eating a Taiwanese breakfast is akin to leaving New York without having eaten a bagel. It simply isn’t done. Breakfast here is street-food based and it’s not healthy; all are white carbs, most are fried. You’ll recognize a breakfast place by the basket out front full of youtiao (fried dough sticks, literally “oil stick”). Yonghe Dou Jiang Da Wang in Da’an (仁愛路四段63號 63 Ren’ai Lu, Section 4, near Da’an Lu. Section 1) serves all the key players in Taiwanese breakfast: youtiao; shaobing (a flaky flatbread with sesame seeds, often topped with a thin omelet); shaobing youtiao, in which the youtiao is wrapped in the shaobing; dan bing, a crepe topped with a very thin omelet; and fantuan, shredded dried pork and pickled vegetables in a sticky rice ball.

Now that you’re well fueled, walk 20 minutes to Chiang Kai-Shek Memorial Hall. Work off breakfast climbing the 89 steps—Chiang’s age when he died—to the entrance of this monument to the first president of modern Taiwan. The building, striking with its white marble exterior and octagonal blue-tile roof, stands 250 feet tall. The first floor documents Chiang’s life, from his military training in Japan to the founding of the nationalist Kuomintang party, his marriage to Soong Mei-ling, and his rapid rise within the Kuomintang to become president of the Republic of China, a position he held until his death in 1975.

Before lunch, take the metro 10 minutes to Longshan Temple (buy the 24-hour pass for NT$180). Built in 1738 by settlers from Fujian province, Longshan has long been a place for worshiping Chinese folk religion deities, and on the weekends you’ll see locals here, making offerings and chanting prayers; visitors are welcome to join. Look up at the colorful upturned eaves and the mosaics of Chinese zodiac signs, like a bright dragon.

For lunch, take the metro 10 minutes back to Zhongxiao Xinsheng station for a bowl of beef noodles at Tian Xia San Jue (天下三絕, No. 3, Lane 27, Section 4, Ren’ai Lu, near Lane 219, Section 1, Fuxing Nan Lu). A fragrant, steaming bowl of broth with noodles, tender beef, and sliced scallions is Taiwanese comfort food. Pair a bowl with cucumbers in sesame sauce topped with sesame seeds and a refreshing plate of beancurd noodles tossed with shredded carrot, cucumber, and garlic.

Taipei bests larger cities with its huge amount of surrounding greenery. One of the best places to catch sunset and see the Taipei 101 skyscraper light up is from Elephant Hill (Xiangshan). From Xiangshan metro station, take exit 2 and walk to the hill. It’s a 20-minute climb up stairs, but there are rest spots along the way, and the view at the top—a panorama of Taipei, centered on 101—will make worth the effort.

Dinner tonight is at mid-market Taiwanese restaurant Shin Yeh (2/F, 34-1 Shuangcheng Jie, near Dehui Jie). There are a few branches of Shin Yeh now, but this is the original. Start off with addictively good fried oysters with basil, before moving on to star dishes like stir-fried vermicelli noodles with seafood, pan-fried fragrant turnip omelet, and run bing, an oversized fresh spring roll stuffed with bean sprouts, cabbage, and ground peanuts. 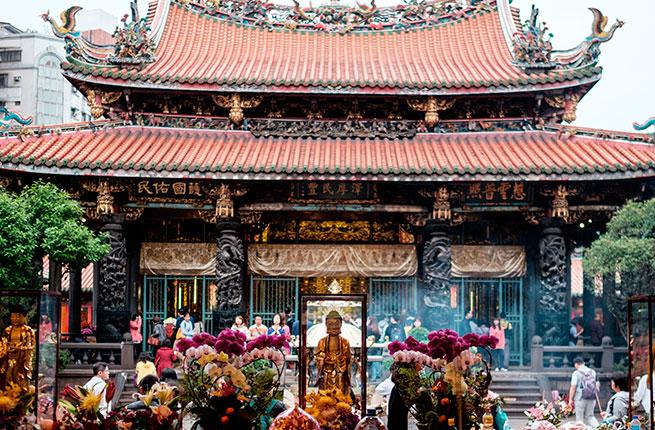 Pack your bathing suits and take the metro 45 minutes outside the city to Beitou Hot Springs (Xinbeitou station). Right outside the station is a map of all the hot springs and attractions here, among them the Hot Springs Museum and Plum Garden, the lovely former home of calligrapher Yu Youren. The main public hot springs are next to Plum Garden; two-hour access to four pools is just NT$40. It’s very clean, but there are also private options. Spring City Resort and Sweetme Hotspring Resort offer moderately priced private hot springs (expect to spend NT$800–1,200) while Villa 32 offers Beitou’s most upscale hot spring. There are a few small restaurants in town serving simple, local fare, or you can bring a picnic from Taipei (basement food courts in every mall in Taipei offer to-go meals).

Back downtown, rehydrate with a few cups of tea at Ten Shang's Tea Company (156 Jilin Lu near Section 2, Minsheng Dong Lu). The Zhang family hail from a tea-growing community in Nantou and have been selling organic homegrown teas for 35 years. They, their daughter, and their son-in-law will expound on the country’s rich variation in teas, serving different varieties for you to taste. Leave with a bag of Lishan oolong or red jade black tea and the knowledge of how to properly prepare it.

Crosstown in Songshan district is Songshan Culture and Creative Park, a 1930s Japanese tobacco factory turned creative hub. The former warehouses now host rotating art exhibitions, performances, and pop-up shops. Stop by Taiwan Design Museum and wander through the plazas, which often host events. At one end of the park is Eslite Spectrum; you could spend hours in this mall among the Taiwanese fashion and product designer shops, a bookstore, rows of teashops and restaurants, and a basement food court. On your way out, try a buttery, crumbly pineapple cake at Wu Pao Chun.

For dinner on your last night, splash out at Yen Chinese Restaurant, a contemporary Cantonese restaurant inside the trendy W Hotel. From the 31st floor, Taipei sparkles through the floor-to-ceiling windows. Tuck into wok-fried abalone with wild mushrooms, onion, and scallions, Peking duck, and steamed cod with black beans before moving to adjacent Yen Bar for a drink from the 90-cocktail menu. 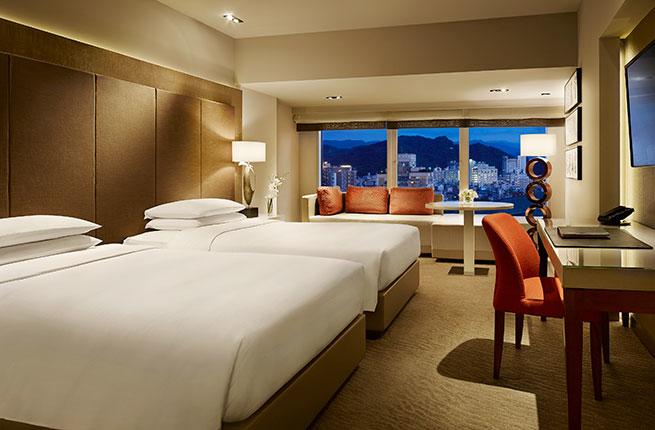 Book somewhere near the metro so you can zip around Taipei with ease. If you’re going to Taipei in the summer, rooftop pools at the Grand Hyatt Taipei (from $450) or the Sheraton (from $192) feel great after a long day of sightseeing. The sleekest hotels in the city are design hotel Humble House (from $190), which itself has a nice rooftop pool, and neighboring W (from $264), sandwiched between upscale malls whose basement food courts house great places to eat. Good midrange options include the Dandy Hotel chain and the quirky amba hotels, where drawings span the walls and everyone leaves with a pair of flip-flops; there’s one in Ximending (from $102), one in Zhongshan (from $95), and a third opening in Songshan at the end of the year. Dongwu Hotel (from $52) is a solid budget option, a quick walk to Daqiaotou metro, and with ample restaurants nearby.

From mid-May through August, Taipei is hot and steamy; temperatures can top 100ºF, with humidity to match. June through September is typhoon season, which is not as scary as it sounds but which does bring rain. October through April is the best time to visit, when the sun is out and the weather more comfortable (even in winter, the temperature rarely dips below 50ºF).