Events Kaelin Dodge The Craziest Mini-Golf Courses in the U.S.

While rugby is not a sport one typically associates with Asian countries, the sport has been gaining popularity with 31 members in the Asia Rugby Union. Singapore, in particular, is a hotbed for rugby with its history as a British colony and the relatively large expat population. In addition to tournament games played at The Padang or Singapore Sports Hub, various bars and restaurants in the city also live stream rugby games from all over the world.

Rugby–more formally known as rugby union–is a contact team sport that originated in England. It is played by two teams of 15 players using an oval-shaped ball. While both games are derived from the early version of rugby football which originated in 19th-century England, rugby is not to be confused with American football. Rugby is played in an 80-minute game with different rules. For example, in rugby forward passing is always illegal while in American football players pass forward in certain situations. American football’s touchdown is similar to rugby’s “try” but to score a “try” in rugby, the ball actually has to be touched down to the ground while American football’s touchdown does not, despite the name. There are a number of rugby game variants from the rugby union with differing number of players and time, the oldest and perhaps most popular of

Events Kaelin Dodge The Craziest Mini-Golf Courses in the U.S.
Continue Reading Article After Our Video

Singapore’s rugby union is currently ranked 6th in Asia and 58th in the world.

The History of Rugby in Singapore

Singapore was a British colony in the 19th-20th century, during which time rugby was introduced to the island. In the 1900s the Singapore Civilians team competed against the Malaysian state teams in the Malaya Cup. The Singapore Rugby Union was founded in 1966 and it joined the International Rugby Football Board (now known as World Rugby) in 1988. While the popularity of rugby among non-expats in Singapore has been gradual to grow, Singapore currently has over 12,000 registered players including 2,000 women. Singapore’s rugby union is currently ranked 6th in Asia and 58th in the world.

In addition to the Singapore Sevens, Singapore also hosts the Singapore Cricket Club International Rugby Sevens. The SCC 7s, as it is more popularly known, is actually Asia’s oldest rugby sevens tournament and has been played since 1948. The SCC 7s is played at The Padang (which means “the field” in Malay), a historic field in the central business district surrounded by historic colonial-era buildings (formerly government buildings of the British Empire). The Singapore Cricket Club was established on the sound end of the field in the 19th century. The 2019 SCC 7s had thirteen teams registered from around Asia, United States, and Australia.

The Singapore Rugby Union has two men’s teams and two women’s teams along with three young adult (under 19 or under 20) teams. There are men and women 15s teams (playing the full rugby union game with 15 players per team) and 7s teams. There are boys’ 15s and 7s teams and an under-19 girls’ 7s team. Singapore’s national men’s rugby team participated in the 2019 Asia Rugby 7s Trophy tournament (the qualifier tournament for the main tournament series) held in Indonesia and came in second place, losing to Malaysia. The women 7s team moved on to the main series of the Asia Rugby Sevens. In addition to participating in international tournaments such as Asia Rugby 7s, there is a national league competition for local teams to compete for the championship. League tournaments for the full game takes place in the fall to the spring season and a 7s tournament is held in the summer.

The Singapore Sports Hub was built in 2014 and replaced the former National Stadium for all things sports and entertainment related events. It boasts a 55,000-seat national stadium with a retractable roof, a 12,000-seat indoor stadium, an aquatic center, a multi-sport arena and a water sports facility. The Rugby World Club 10s was the first sporting event held at the then-new Singapore Sports Hub on June 21, 2014 and the stadium continues to host the Singapore Rugby Sevens. In addition to the live events and sports games, Singapore Sports Hub offers other activities for the family including rock climbing, a water park, a sports museum, and an adjacent mall.

Where to Watch Rugby in Singapore

With the number of expats living in Singapore, there is a demand to watch major rugby games live from around the world. There are a number of sports bars around Singapore to catch live sports games, including rugby, and many offer deals on food and drinks. Harry’s Bar is famous for streaming live games at their 20 locations from rugby to cricket and ice hockey, with game times listed on their website. Bull and Bear with its outdoor seating and daily happy hour as well as Boomarang are also popular spots to catch a rugby game. Bar ’75 at the Crowne Plaza Changi Airport also often serves up rugby-themed menus during game days. Molly Malone’s, Singapore’s first Irish pub which was opened in 1995, also shows rugby games live including Super Rugby. Crossroads Brewing Co is the local craft brewery and official partner of Singapore Rugby Union, and they show rugby action on five screens. 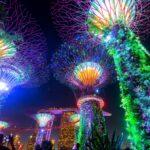