Perhaps you’ve heard the rumors about Singapore, the warnings, the advice. Follow the laws, of which there are said to be many.

Most infamously: don’t chew gum, don’t smoke weed. They say this is a so-called “nanny state,” after all. But really, it’s just a highly regulated society that somehow found a secret sauce that’s one part capitalism, one part socialism, one part authoritarianism, all of which blends together to create a sort of Utopia Lite, a country where crime is low, food is cheap, pollution is nonexistent, and disparate cultures and creeds live together, side-by-side in perfect harmony.

As a visitor, it’s important to follow the laws—which, to be honest, basically boil down to don’t be a jerk to anyone ever—but, to ensure for maximum enjoyment, it’s also necessary to follow the rules.

When you first arrive, perhaps after flying the longest flight in the world, you’ll step outside and quickly realize: damn, it’s hot. Very hot. And humid. Very humid. You won’t want to wear a jacket, not even to dinner. Nor will you want to don a frock. You won’t want to wear a button-down shirt or a blouse. Jeans? No. You really won’t even want to wear clothes, period. It’s that hot—it’s nudist-hot. But also, what are you dressing up for in the first place?

Maybe you’ve heard that Singapore is the most expensive city in the world. Maybe you’ve watched Crazy Rich Asians. Maybe you’re staying at a gloriously five-star hotel like the Fullerton Hotel (which we just named one of the best hotels in Asia, and one of the top 100 hotels in the world). Surely, you may think, you’re in a fancy town. A London! A Paris! You may be. But who cares? It’s just too hot!

And, also—this is a land of hawker centers. Dinner is cheap! Food is cheap! Why the hell would anyone sit down and shill out for a multi-course meal?

INSIDER TIPThere’s a lot to see and do in Singapore. Tons of folks wander in during a layover and think they can see it all. If this is you, organize a guide who can take you quickly through this amazing town. We suggest Jane Goh. She’s incredible.

Rule #2. Eat Everything in Sight, Regardless of How Much Time You Have or How Full You Are 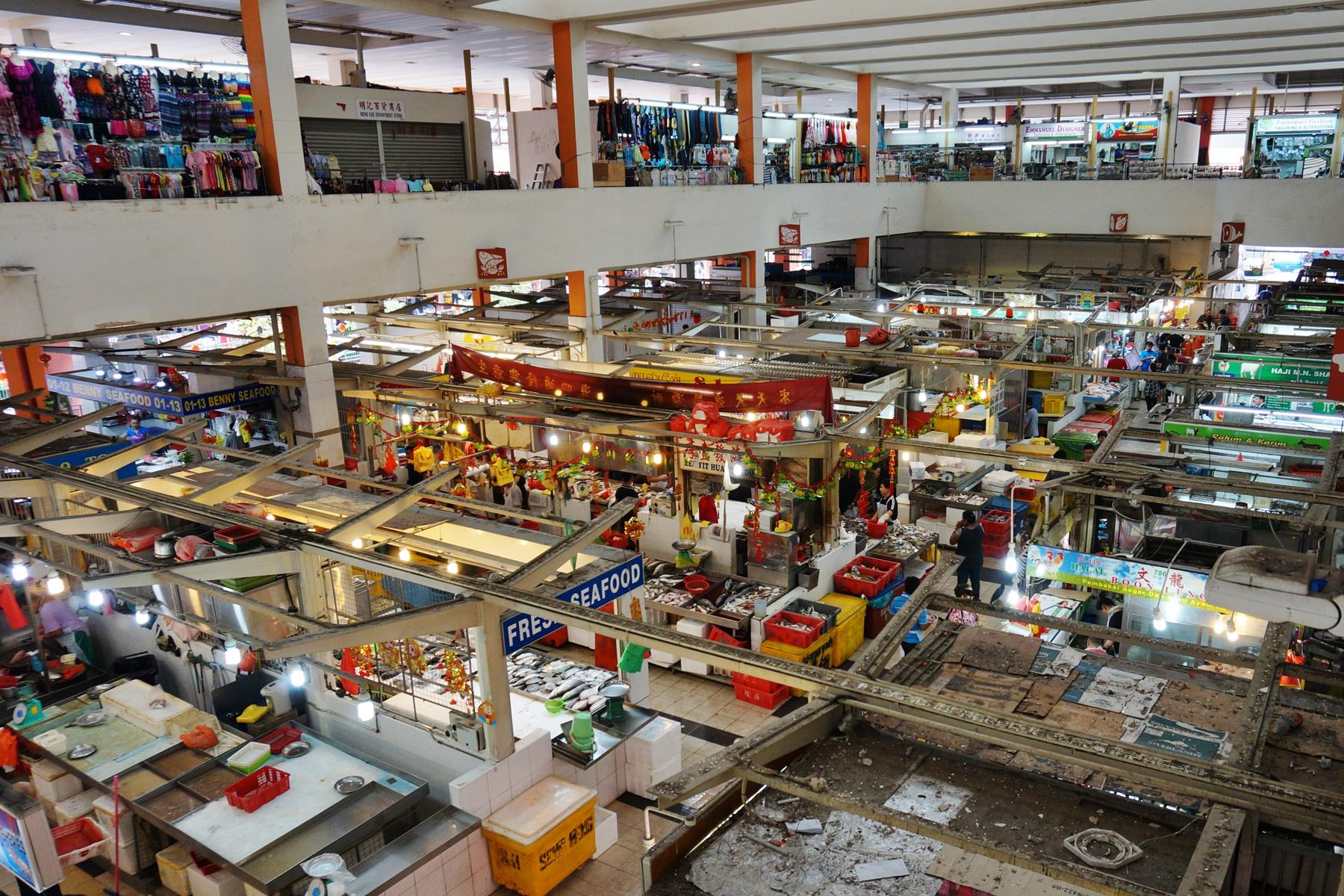 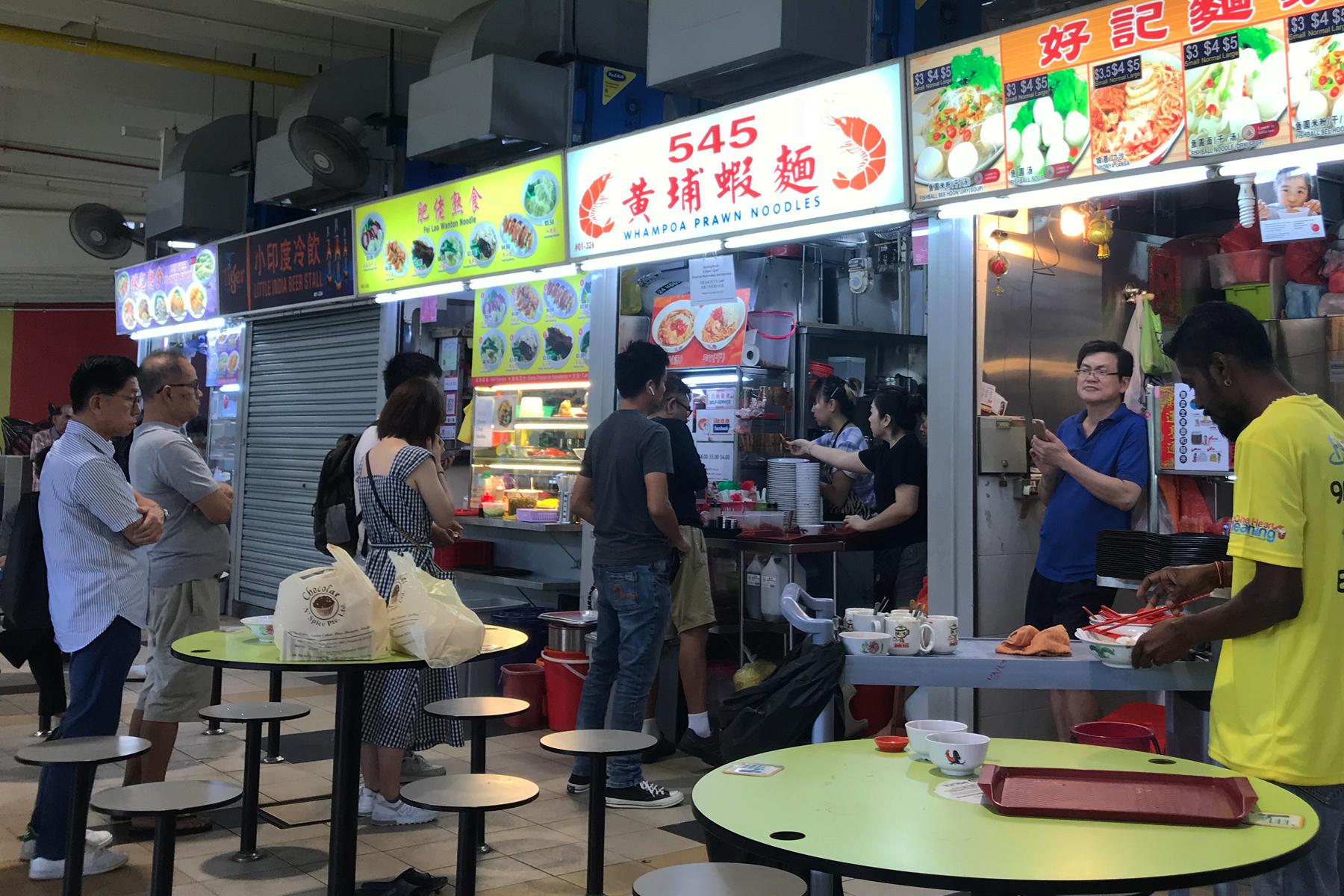 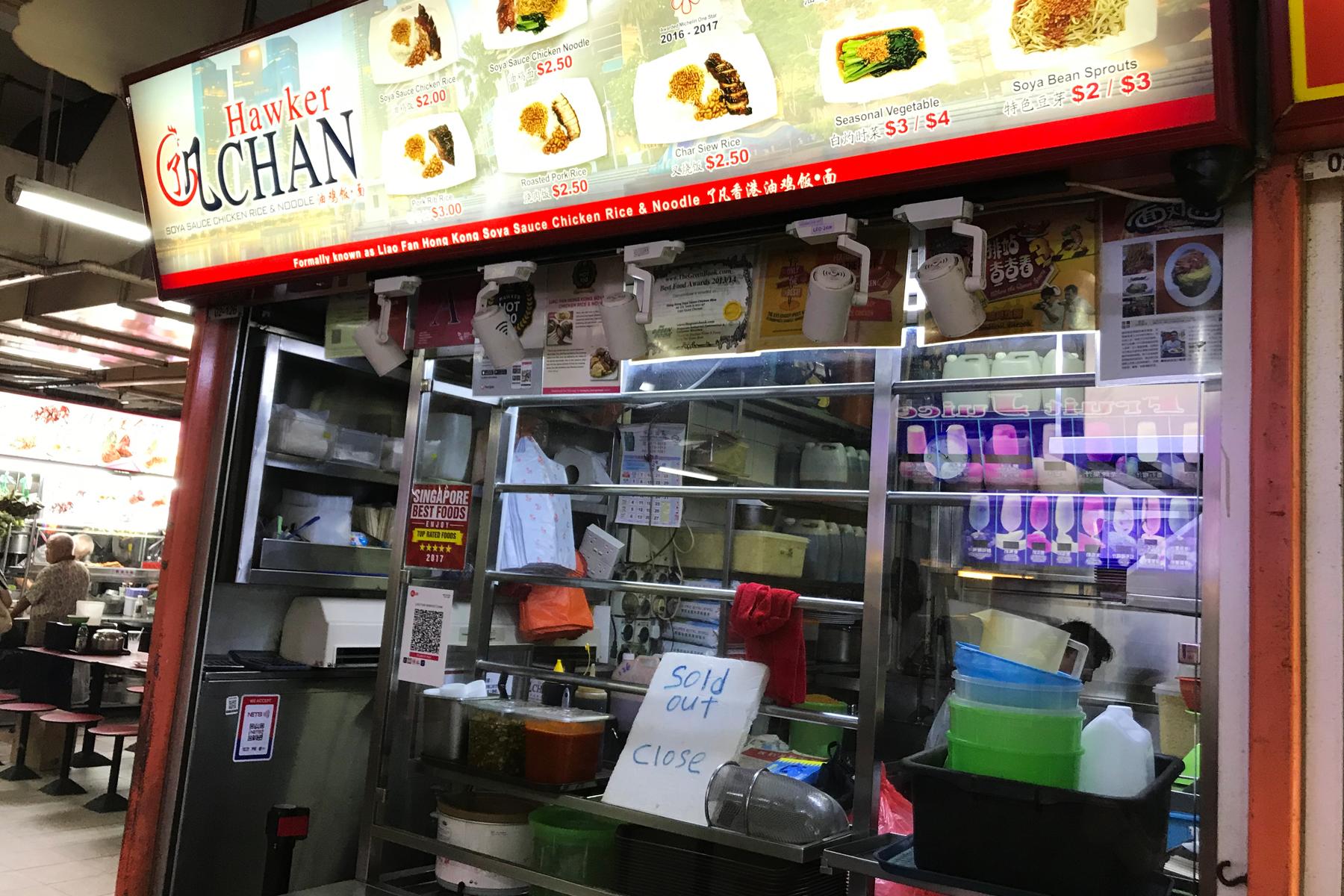 To the untrained eye, hawker centers are confusing. They’re concrete and plastic palaces, magical labyrinths of scents and stalls, where hunched, sweating geniuses toil over scalding pots and whip together some of the finest grub you’ll ever taste.

To the uninitiated and alone, it’s perhaps too much. Where to even start? What to eat? It would be easy to simply sidle up to the first stall hawking something remotely familiar—dumplings, maybe, or (and please don’t do this) a steak or a burger (they have American-food stalls, too). But, here’s what to do, as per the brilliant Jane: go to the stall with a line. If there’s no line, move on. You may have to wait, but it’ll be worth it. But regardless of what you do, you don’t need to worry about your health. These stalls are government regulated and each one is given a grade.

Perhaps the longest line at any stall in any center belongs to Hawker Chan at the Chinatown Food Complex on Smith Street, which was awarded a Michelin star a couple years ago. Apparently, the line was always long, but now it can take upwards of two or three hours. And they sell out fast. To compensate, the proprietor and chef, Chan Hon Meng, has opened a second location on Tai Seng Street, as well as multiple outlets in Asia and Australia.

If you only have a short amount of time, or a lean appetite (you’re in the wrong town for a lean appetite), bee-line to the Tekka Food Center in Little India and queue for 545 Whampoa Prawn Noodles. Behind the counter, you’ll meet Ruifang Li. She’s younger than many of the other hawkers, but hawking is in her blood. Her grandfather started the business in the ’50s and, although Li initially went into the corporate world, she came back to carry on the legacy. And Singapore is a better place because of it. The Family Li’s prawn noodle soup is one of the most gorgeous broths imaginable, concocted from prawn heads and pork bones, in which velvet-like slivers of egg noodles swim. As it goes down, it’s hot, both in spice and temperature—but balanced. Finally, your insides and your outsides are in harmony. You can walk through the heavy air, sweating happily.

Rule #3. Experience All the Cultures

When you walk through Singapore, you’ll quickly notice a harmonious blend of society. It’s been said more than once that Singapore is the easiest country for a Westerner to experience. For one, English is the primary language taught in schools, with the secondary being either Mandarin, Tamil, or Malay. But, it’s also an incredibly diverse melting pot, one in which you can experience a vast continent’s worth of culture on a single island. It’s a small world at this veritable Epcot Center of a city-state.

Those four languages give you an insight into the different cultures of which the country is made. And, although there are different areas within the city that provide a cultural bastion for each, the population of these neighborhoods is not homogenous. In part, that may be due to government housing interference—this is a country that cares for its people, and therefore houses them. Vast swathes of the sky-rises are, in fact, government-subsidized housing—and 80 percent of the population calls these apartments their homes. A result of this, there is a multitude of cultural diasporas throughout the city.

But, it wasn’t always this way, and that’s why there still exists a Little India, a Chinatown, and an Arab Street. 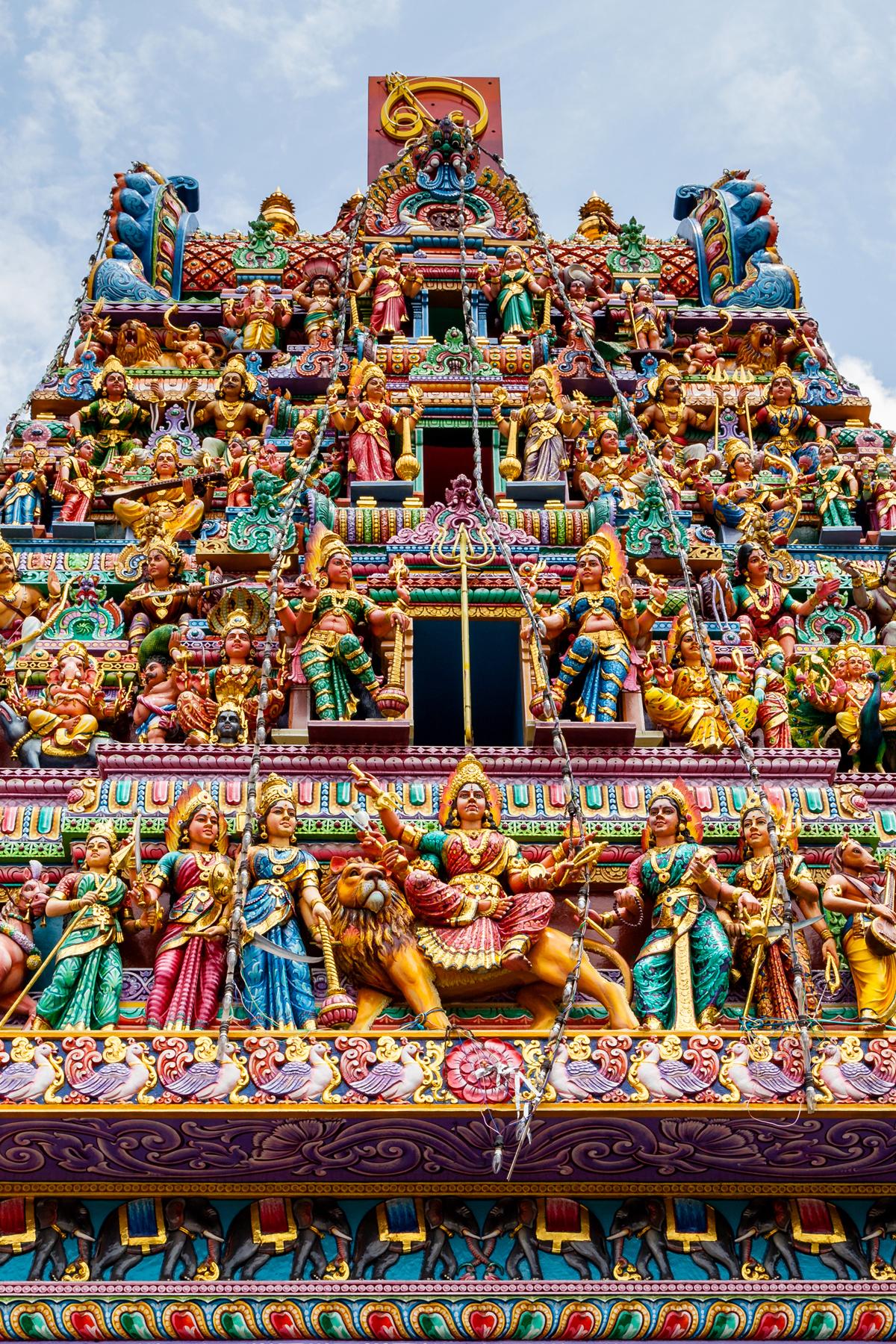 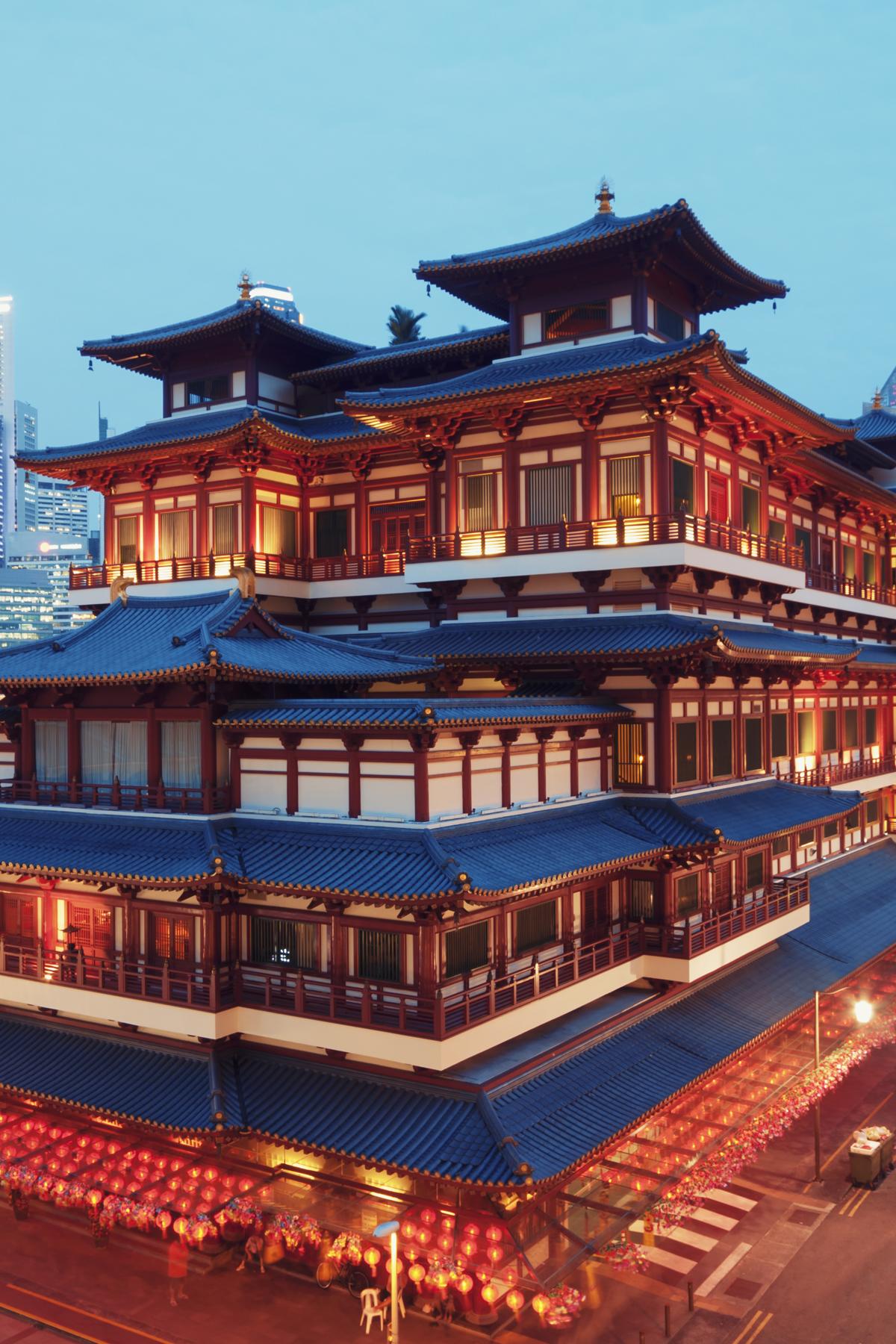 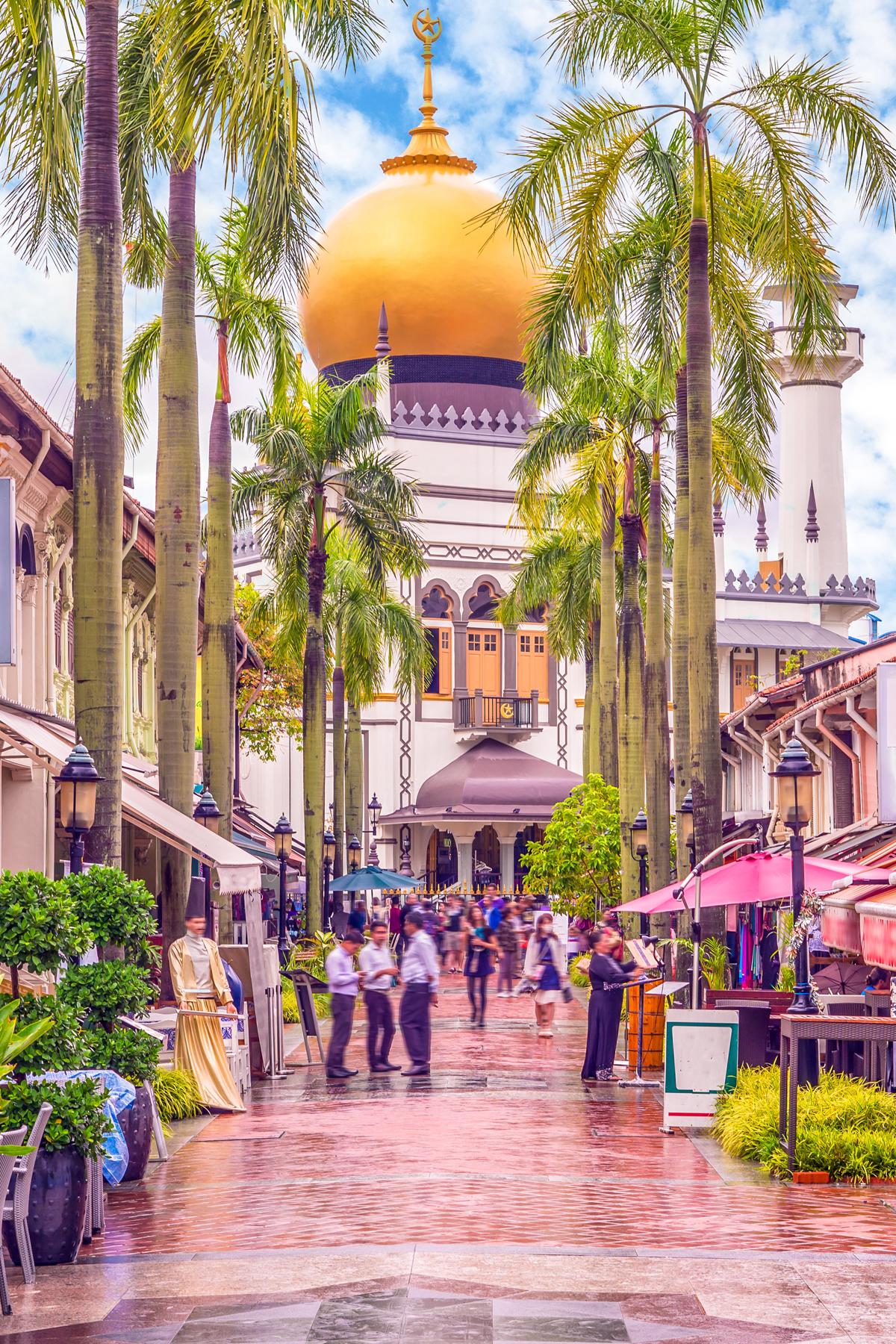 Take the time to go on a tour of each—spend a morning at the Sri Veeramakaliamman Hindu temple, wandering the loop around its main altar, gaze at the beauty of the intricately-carved deities; in the afternoon, stroll through the Buddha Tooth Relic Temple, which takes its name from the fact that it houses what is said to be a tooth of the Buddha on its fourth floor; in the evening, listen to the call to prayer at the gold-domed Masjid Sultan Mosque, out of which stems Haji Street, where worshipers once boarded buses to take them to the sea, where they would sail off to Mecca for the Hajj..

Along the way, you’ll no doubt pass more than one church or synagogue. This is a city that happily houses every creed under the sun. Singapore has a population of 5.6 million, of which 34 percent are Buddhist, 18 percent Christian, 14 percent Muslim, 11 percent Taoist, five percent Hindu. Quite frankly, what’s incredible is the sheer normalcy of this. Perhaps, it’s simply that too many of us live in countries where hate crimes are heading in the wrong direction, where certain religions are marginalized or demonized, perhaps that’s why it seems almost paradisiacal to wander through a population so harmoniously cohabitating. It does a heart good. It gives a hope to the nature of humanity.

Rule #4. Chow Down on Poisonous Nuts

You’re going to hear this word a lot: Peranakan. And you may not know what it means. In short, the Peranakan people are descendants of the Straits-born Chinese, those who journeyed southward to Malaysia and then Singapore and took up residence. The neighborhood of Joo Chiat was once predominantly Peranakan and it’s here you’ll find rainbow-colored houses and a restaurant called Guan Hoe Soon, which, naturally, serves Peranakan cuisine.

INSIDER TIPSingapore author, Josephine Chia, who is Peranakan, published an excellent article on Peranakan history and culture, which is definitely worth a read.

Guan Hoe Soon has been around since 1953 and the cooking methods haven’t changed since—recipes passed on down through the generations, recipes that were no doubt concocted long before this place even opened its doors.

The menu may be confusing. But here’s what to order, as per tour guide Jane Goh: ikan assam nanas pesad, a tamarind-soaked fish; nonya chap chye, a tofu and vegetable stir-fry topped with dried shrimp; and ayam buah keluak, chicken braised in spicy tamarind gravy, served with buah keluak nuts. About these nuts—if not prepared correctly, which involves boiling them thrice and burying them in sand for weeks, the cyanide of their seeds will kill you dead. Bottom line: they’re extremely poisonous. But who cares? They’re delicious. Served in the shell with a smooth paste-like consistency, the nut has a bitter-earth taste that soaks up the spice and sits well in the belly. Because of the laborious process, they’re made less and less and, more startlingly, there are fewer and fewer who even know how to do it. It’s a food existing just one step ahead of extinction. Eat it while you can.

Rule #5. Don’t Forget to Marvel at the Majesty of Nature

In Singapore, green is in. It’s as ubiquitous as the sweat inevitably pooling on the furrowed brow of anyone standing outside. Trees line even the busiest thoroughfares and small gardens bookend crowded blocks. Those who venture here from smog-clogged towns will be shocked at how well you can breathe in such a populated capital. 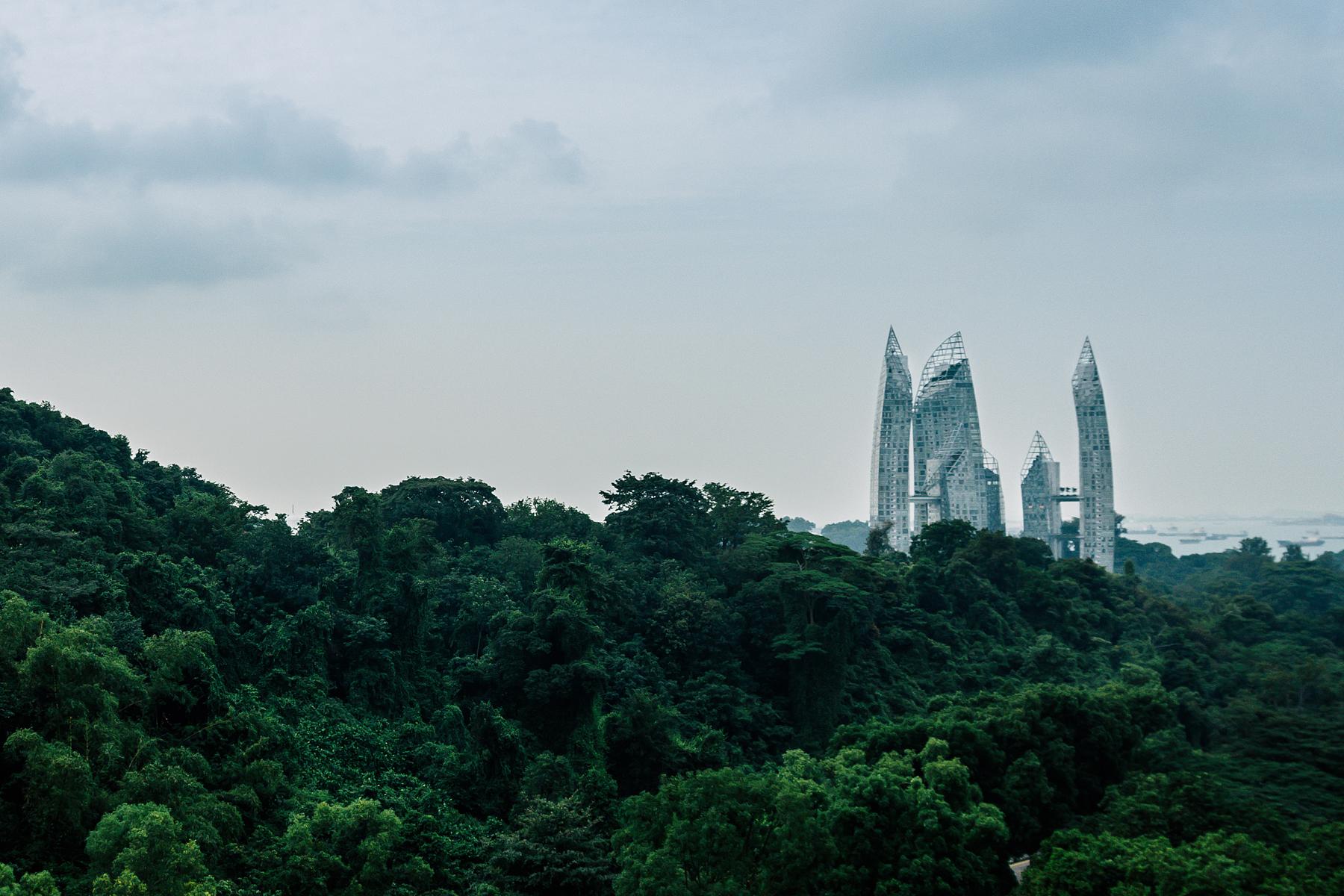 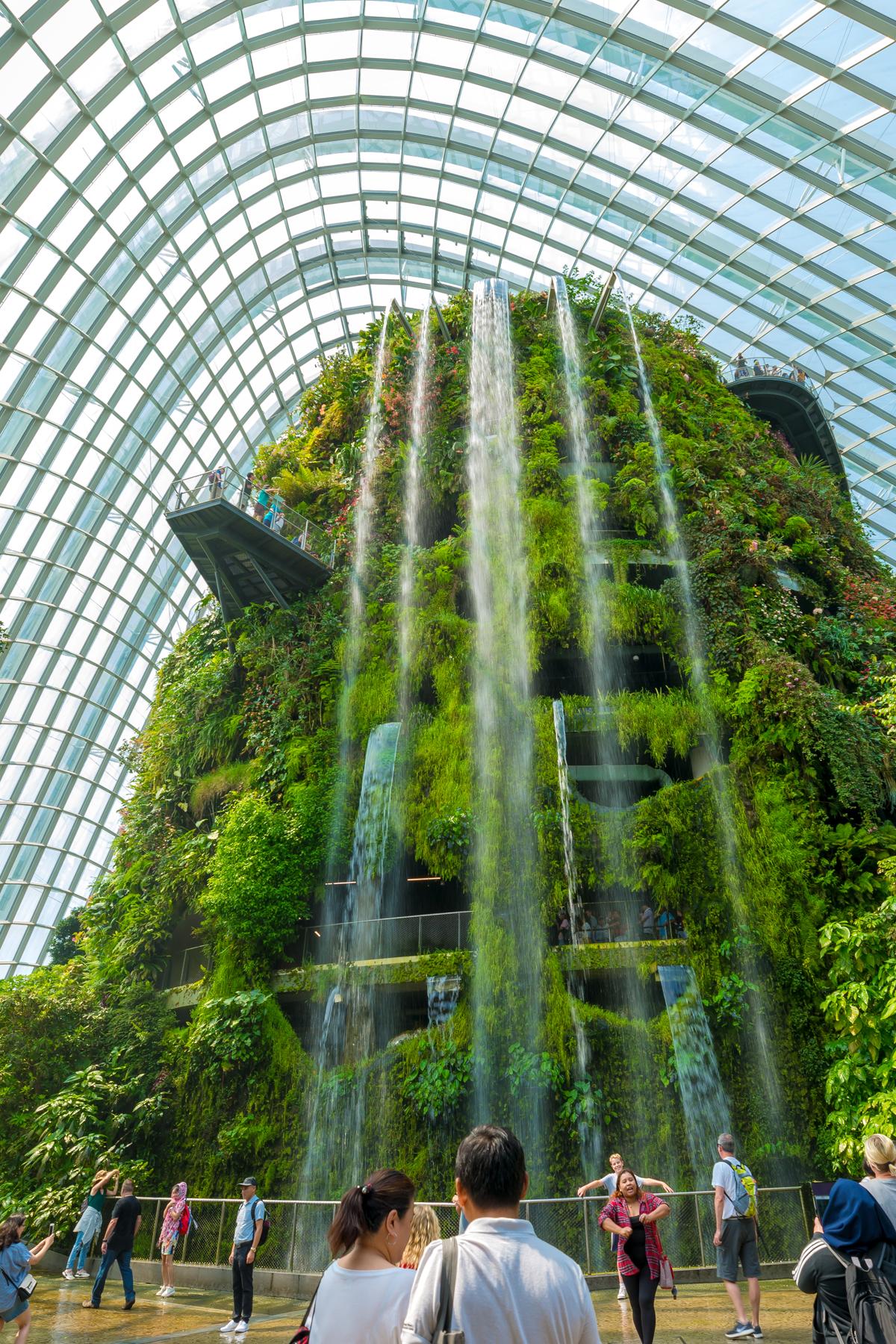 1. The lush jungles of the Southern Ridges, beyond which is a Daniel Libeskind-design skyscraper.  2. An Andean jungle inside a glass dome in the Gardens by the Bay. Shutterstock

But, then there are the parks—both natural and manmade. To the south are the Southern Ridges, a glorious rainforest that can be wandered via a manmade path. While walking through it, you’ll get a picture of what once was—before the days of Raffles and the British, this is what this island was. Beautiful, vibrant jungles. It’s said that lions once roamed these forests—“Singa” means “lion” in Sanskrit—but now it’s monkeys that terrorize these lands. Well, cutely terrorize. You’ll no doubt notice the signs that command, “DO NOT GO NEAR MONKEYS.” The advice for what should be done if approached by a monkey is similarly ominous: “Keep calm, avoid eye contact with the monkeys, and slowly walk away.”

If you’d rather a monkey-free nature experience, the Gardens By the Bay Domes, which are surrounded by the futuristically whimsical giant super trees, are glorious. It’s a curated wonderland that whisks you from the quaint pleasantries of Italian fields to the wilds of the Amazon jungle. Bonus: it’s air-conditioned.

Bonus Rule: Don’t Be a Jerk

This cannot be said enough. Don’t be a jerk. Though this advice generally pertains to how one should live as a human being, it’s particularly pertinent in Singapore. It is not tolerated. (Nor should it be tolerated anywhere.)

Don’t be so stupid as to litter—not gum, not a cigarette butt, nothing. Don’t spit on the street—but, honestly, why would you spit on any street? Be kind, or at least cordial, to everyone around you, even if for whatever ignorant reason or prejudice you find fault in them. Follow the rules that are posted on signs throughout the city—the advice is usually something like, “Don’t smoke here, don’t drink here, don’t pet the monkeys.”

Basically, if you wouldn’t do it in front of your mother, your teacher, or your priest (or denominationally equivalent), don’t do it here.

Singapore is a lovely country, a beautiful country, a harmonious country. Enjoy it. Eat all the food. See all the things. Meet all the people. And don’t be a jerk.