Indra Sunar’s right arm is weary, his back is sore, and his body is drenched by sweat. The 52-year-old Nepali man is in a familiar pose, hunched over an open flame in the backyard of his Kathmandu home, shaping a hot piece of steel by hammering it with a heavy wooden mallet.

This is the most draining step in a labor-intensive process that lasts this third-generation blacksmith up to 100 hours over eight days. The result is the creation of a 45 centimeters-long Kukri dagger, just like the ones wielded for centuries by Nepal’s revered Gurkha soldiers.

Gurkhas long have been highly-prized recruits for armies and, when they go into battle, they still typically carry one of these 1,400-year-old Nepalese knives. Kukris are not just weapons. They are also icons of Nepal, symbols of wealth, and have spiritual significance. Their importance to Nepalese culture is why Sunar has dedicated 36 years to handcrafting Kukri daggers.

Now he passes on this expertise to tourists during his Kukri-making classes organized by Backstreet Academy, a company that gives locals across Asia a web-based platform through which to offer off-the-beaten-path travel experiences. When Sunar meets me on the front steps of his hillside home it is quite a greeting—a wide smile on his face and a giant dagger in his hand.

A kind and polite man, he offers me a drink, introduces me to his family, and then ushers me through his home to the workshop at its rear. Before he begins demonstrating his metal-work techniques, Sunar first offers some detail about Kukri knives. Via an interpreter, he explains that these weapons are modeled after the Kukri snake. Nepal is home to more than 50 species of this small, non-venomous reptile, which has teeth that are broad and curved, just like the shape of the Kukri dagger.

Traditional Kukri knives range from 25 to 32 centimeters in length, although expensive custom blades can be twice that long. The normal-sized daggers weigh between 500 and 800 grams, which makes them hefty yet still maneuverable in battle. Especially ornate, handmade Kukri knives can sell for as much as $700 brand new, while rare vintage versions can fetch more than $3,000.

The meticulous, centuries-old process of making one of these knives was taught to Sunar by his uncle when he was a teenager. It begins with the forging of a piece of steel. Sunar heats this metal in an open flame until it glows red and then, as an assistant holds the piece still with a hand-clamp, he thumps the steel with his mallet to compress it.

Again and again, he strikes the steel, sending amber sparks tumbling through the air. Though I’m only watching, sweat is beading on my face due to the humid weather and the heat from the fire. Then the steel is returned to the flames, to raise its temperature once more, before it is then held on an angle so Sunar can begin to hammer it into the distinctive wide, curved blade boasted by traditional Kukri.

Obviously, I won’t be present in his workshop for the several days it can take to craft a Kukri from scratch. So, Sunar explains the remainder of the process, pointing to the tools he uses. Once the blade is shaped, he chisels designs into the blade and carves a handle from rosewood.

The craftsman uses a smaller chisel to embellish the handle with patterns. The style and intricacy of the blade and handle decorations are typically chosen by his clients, who come to his workshop to order their knives. Many of Sunar’s customers are middle class or wealthy Nepali people who can afford the $100 starting price of his custom Kukri daggers in a country where many people don’t earn that much in a week. 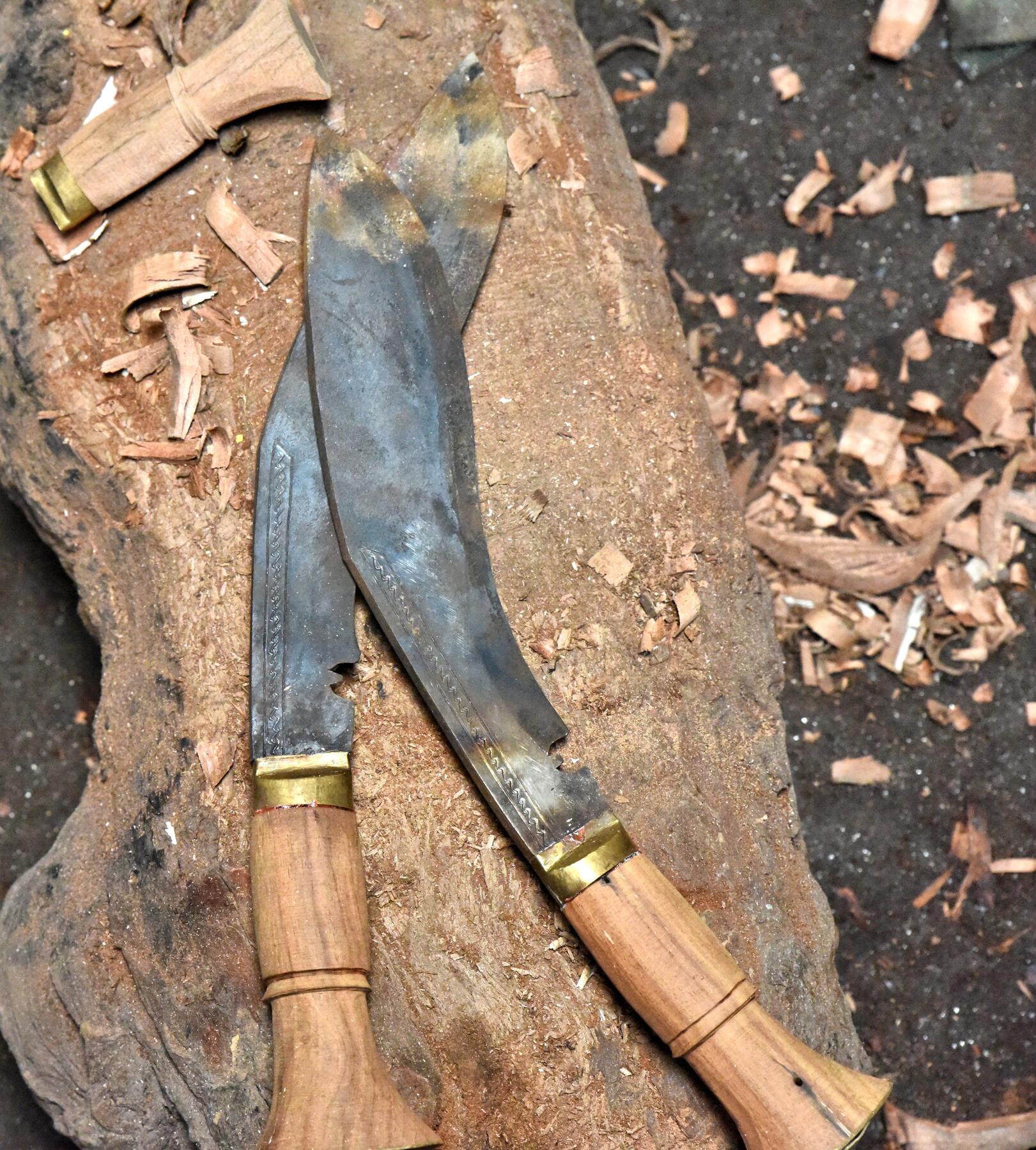 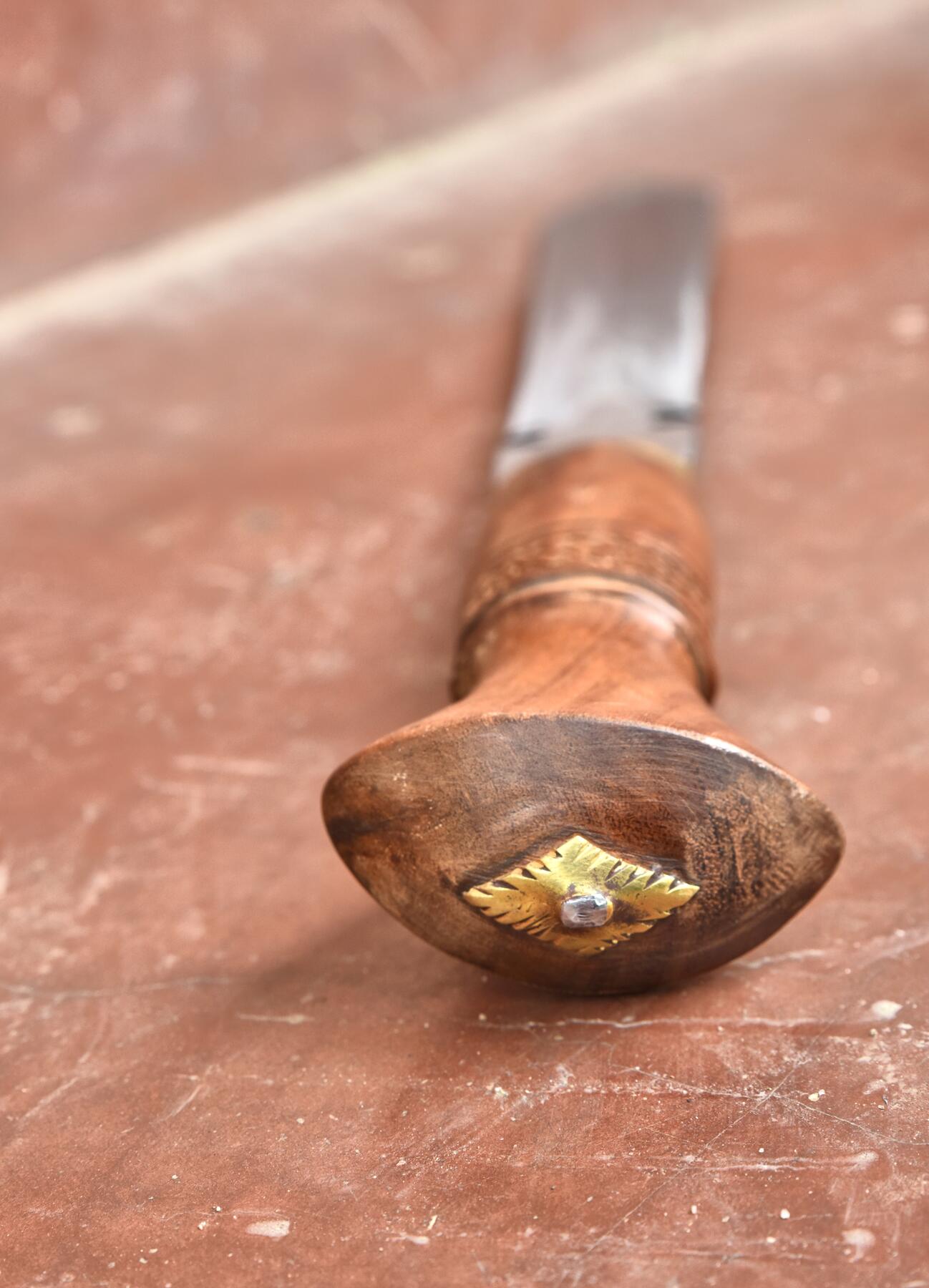 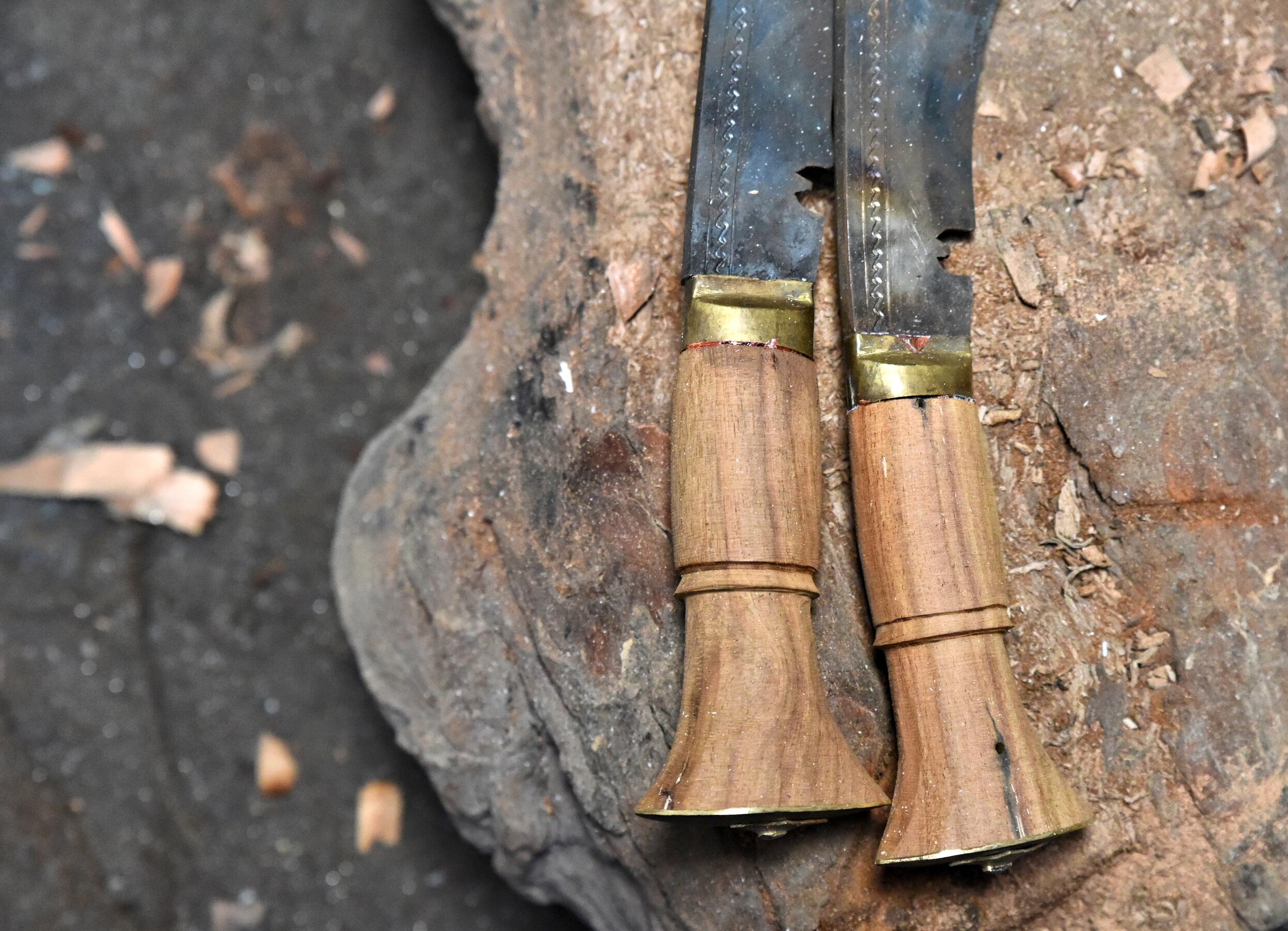 As he shows me one of his most intricately-designed knives, Sunar explains that his small client base presents a challenge. It is simply not worth his time to produce cheaper Kukri to sell in markets. Pointing out the level of detail his knives boast, he tells me he is also proud of maintaining the painstaking traditional methods passed down to him.

Producing Kukri with care, he argues, is the only way to show respect to the Hindu gods who, in turn, imbue these daggers with the power to ward off evil spirits and protect their owners. “I don’t make Kukri for some money,” he tells me. “They are our culture, our spirit.”