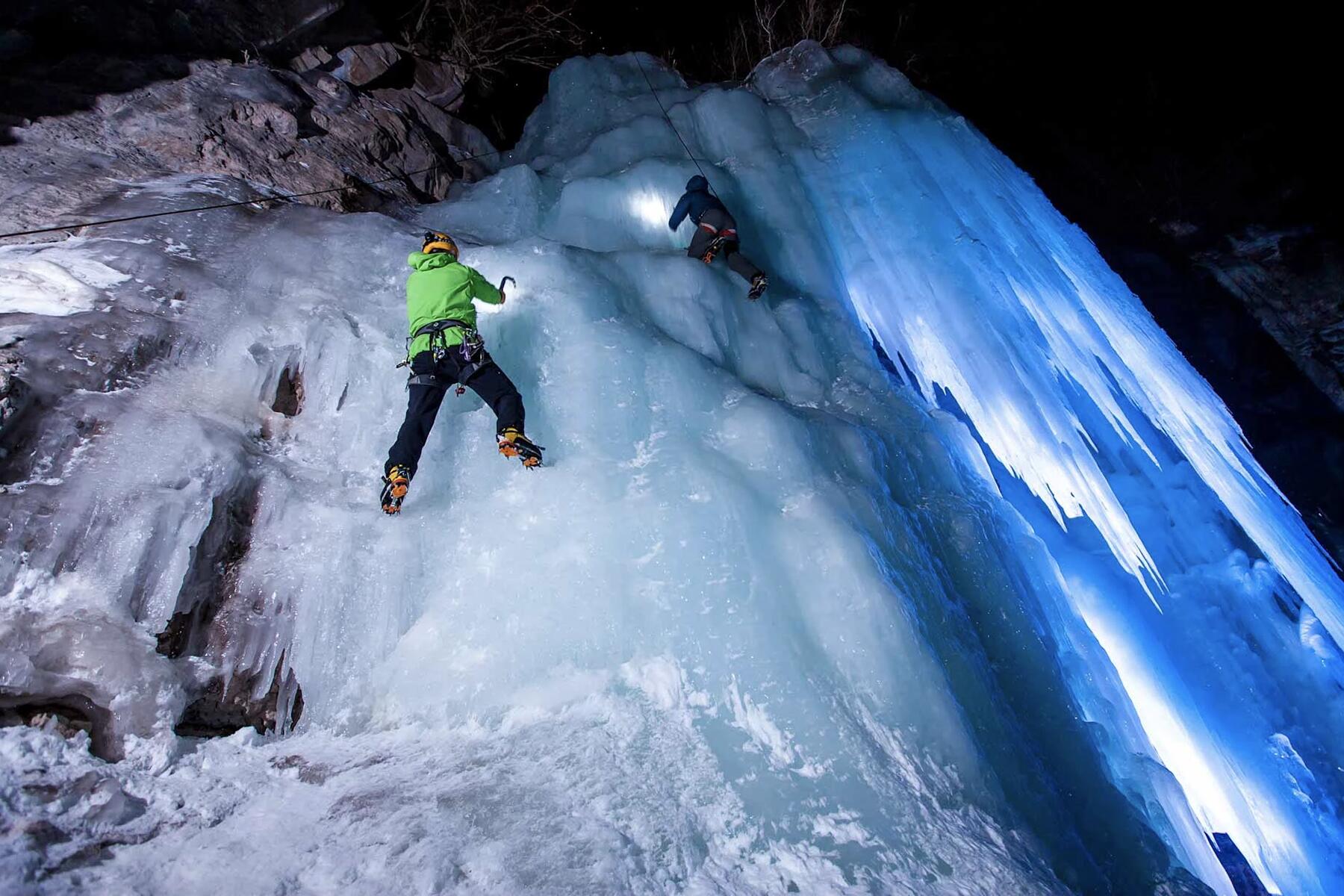 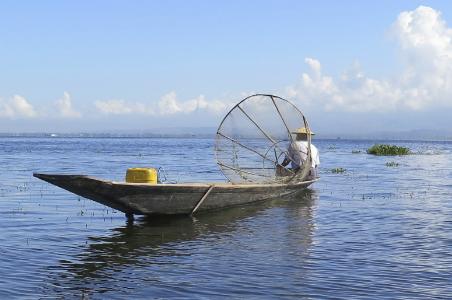 As I entered the wide expanse of Inle Lake at the end of a narrow feeder channel, two fishermen appeared on either side of my Abercrombie & Kent longboat, performing what I could best make out as a slow-motion, over-the-water ballet with conical baskets and oars for props—all while balanced on the bows of their boats. It was absolutely enthralling. Until that moment, I'd been thinking that visiting a lake in Myanmar was rather beside the point. Bagan's legendary pagodas had beckoned me for years and were what I'd come to this newly opened Southeast Asian country to see. But while Bagan may be Myanmar's main calling card, the two days I spent on Inle Lake left the more lasting impression. In fact, so extraordinary are its communities, ecology, and traditions, it could well gain UNESCO heritage status before Bagan (both have been on a tentative list since 1996). So don't miss this remarkable place on your first visit to Myanmar. These are five reasons Inle Lake deserves equal billing to Bagan on your itinerary.

Life on the Lake

Life on the shallow, 13.5-mile freshwater lake is utterly captivating: With no roads or sidewalks to speak of, locals and visitors alike get around in one-person-wide wooden boats outfitted with outboard propellers, which emit a noisy whine when at full throttle and can be raised and lowered depending on water levels. Villages of rustic single- and two-story wooden stilt houses straddle active waterways. Fishermen work the lake, using a mesmerizing one-legged paddling technique you won’t see anywhere else in the world. Hydroponic tomato farming is also big here, based on an aquabiotic system in use since the 1960s. Cruising along channels hemmed in by floating gardens is simply sublime. 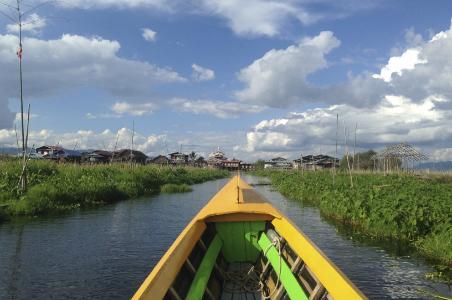 We expect over-the-water bungalows in far-flung places like Tahiti, but you'll also find them on Inle Lake for a lot less per night—you just can't dive into the water from your porch (it's too shallow). Even if you don’t stay in one of these memorable hotels, eating at their restaurants is a must. Tea is grown the world over, but only the Burmese incorporate it into their cuisine—a spicy tea leaf salad that’s best consumed on a lakefront terrace watching longboats zoom by. Hospitality students from all over Shan state come to intern at Heritage House, a gorgeous colonial-looking house doing triple duty as a Burmese cat sanctuary, hotel, and restaurant; you can even take cooking classes and tour its organic garden. Elsewhere on the lake, Golden Island Cottages (pictured) is run by an important local minority group known as Pa-O; its thatched-roof terrace restaurant has splendid views of both lake and sky. 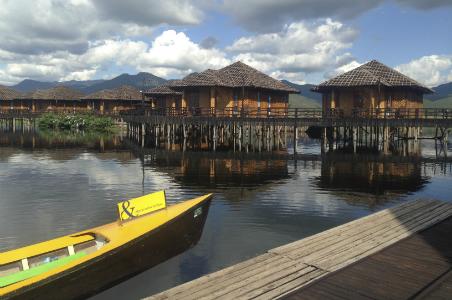 Bagan isn't the only place to see astounding stupas in Myanmar. The ruins of 1,000 centuries-old stone pagodas are crammed together on an overgrown hillside behind an unassuming Inle Lake restaurant. Recently reclaimed from the jungle, they present an astonishing sight: Small, delicate, and closely knit, they're much more intimate than those at Bagan and very easily explored on foot. Regrettably, questionable restoration efforts make this a sight to see as soon as possible, should its character change irrevocably in the coming years. 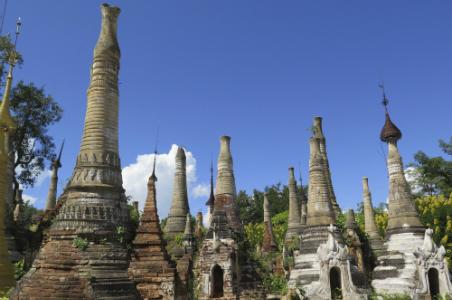 Over 200 monasteries dot the lake, but all boats lead to the unusual Nga Hpe Kyaung, more commonly known as Jumping Cat monastery thanks to the dozens of resident cats trained by monks to “jump” through hoops. The cats don't do much jumping on command anymore, but they do stretch out on the floor, walk the rafters, and wander about at will—as cats are wont to do. The building itself is a splendid wooden stilt structure that dates from 1890. Cats aside, the monastery also houses an impressive collection of ornate buddhas, brought by area residents for safekeeping during World War II and never taken back. 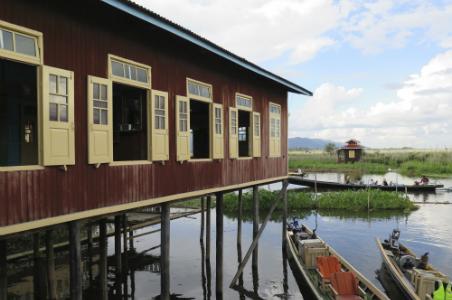 Inle Lake has been a major Myanmar weaving center for over a century and its chief artisans are based in the village of Inn Paw Khon. You'll hear the looms clacking away through open-air windows as you come in to dock. It's a big enterprise by Myanmar standards, with several tidy buildings housing twenty-plus looms apiece. Everything, from the dyes to the finished scarves and longhis (the Myanmar sarong), is done here by hand, by women of all ages (they're allegedly more precise than men). There's no retiring age, either: The eldest women approve designs and dying techniques, their experience and taste still invaluable, even as their eyes fail on the looms. While woven textiles can be found throughout Southeast Asia, Myanmar is the only place to make lotus fabric—and Inle Lake is ground zero for it, as its shallow waters create ideal growing conditions for the flowering plant. You can buy it directly from the source here, for an authentic, made-in-Myanmar souvenir. 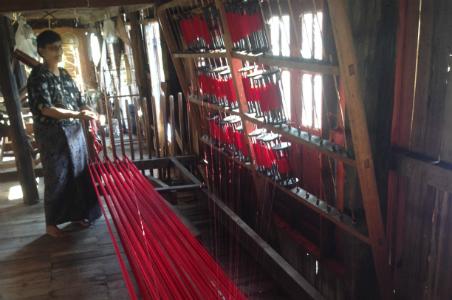 How to Get to Inle Lake: Inle Lake is part of Abercrombie & Kent's signature 10-day Myanmar & the Irrawaddy itinerary, an excellent introduction to the country that includes two nights at the newly rebranded Sule Shangri-La in Yangon and a three-night Irrawaddy River cruise to Bagan on its smart, new all-suite Sanctuary Ananda ship. A&K organizes everything on this trip. The Inle Lake portion includes all longboat rides, guide, meals, flights, attendance at a private boat race, and two-night stay at Inle Lake View Resort, the area's sole luxury boutique resort. Should you wish to arrange an independent visit, you'll need to plan your entire Myanmar itinerary around hotel availability here. There simply aren't enough rooms to meet demand, and what few higher-end hotels exist can get booked up months in advance. You'll also need to arrange and pay for your own boats, meals, and flights to and from Heho airport, an hour or so away, which can be tricky to arrange on your own.

When to Go to Inle Lake: October to February is peak time to visit, as temperatures abate after monsoon season. Water levels are at their highest in October and November and flowers abound, adding gorgeous bursts of yellow to the scenery. October also welcomes the annual Phaung Daw Oo Pagoda Festival, when four gleaming buddhas from the Phaung Daw Oo Pagoda are paraded around the lake on a royal barge. It's a very popular time to be here. So book early if you want to participate, but note that things often shut down for the holiday.

Myanmar Visa Tip: Myanmar's new eVisas are fast and easy to obtain. Simply apply online, upload a photo, and pay $50. You'll receive a 28-day eVisa by email within 72 hours. Print it out, take it with you, and go straight to passport control in Yangon or Mandalay airport.