Whether you’ve got a week or just a day to see a few, these are the 10 best temples and ruins in Laos.

Beautiful Laos has an abundance of glittering temples, many concentrated in the capital Vientiane and in the tourist favorite UNESCO city Luang Prabang. Most are quite easy to access, so you can temple-hop over a day or two in either city, pausing over plates of larb and bottles of Beer Lao to appreciate the different architectural styles. In Luang Prabang, the temples, like Wat Xieng Thong, have low sweeping tiered roofs. In Vientiane, they tend to have verandas. The country doesn’t have as many ruins as its neighbors, but Khmer-style Wat Phu is gracefully crumbling, a lovely antidote to too-crowded Angkor Wat. 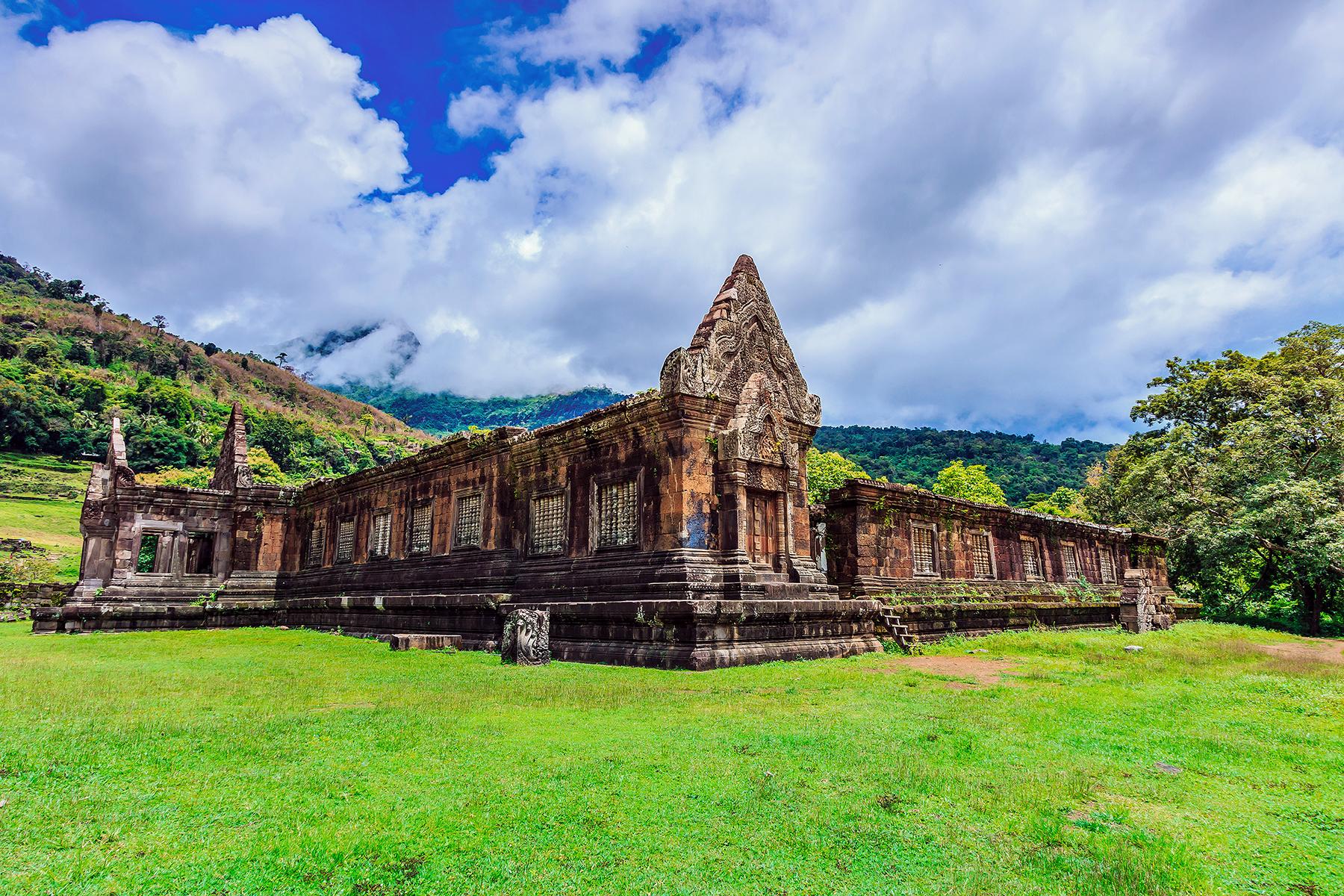 Angkor Wat across the border in Cambodia gets top billing, but it’s also packed. Wat Phu, though much smaller, is largely empty and beautifully decrepit, with little restoration. Its name translates to Mountain Temple, and it’s built on three levels, with 11th- and 13th-century ruins on the lower and middle. This was originally a Hindu temple, later converted to Buddhism, so you’ll see carvings on the lintels of deities Vishnu and Shiva. Shade is provided here by frangipani trees, Laos’ national tree. While level two has most of the impressive and crumbling ruins, it’s up at the top that you’ll find the sanctuary and impressive stone carvings of an elephant and a crocodile. From up here, you can look all the way out to the Mekong. Ditch the flip-flops and sandals; the stairs here are steep and sometimes uneven.

INSIDER TIPWat Phu is in sleepy Champasak, right on the Mekong. There are a few hotels here, and it’s about 20 minutes’ drive to Wat Phu. For more food and lodging options, stay in Pakse (an hour’s drive). Don’t skip Vida Bakery Café, a vocational school with delicious continental fare, including really good house-made breads and pastries. 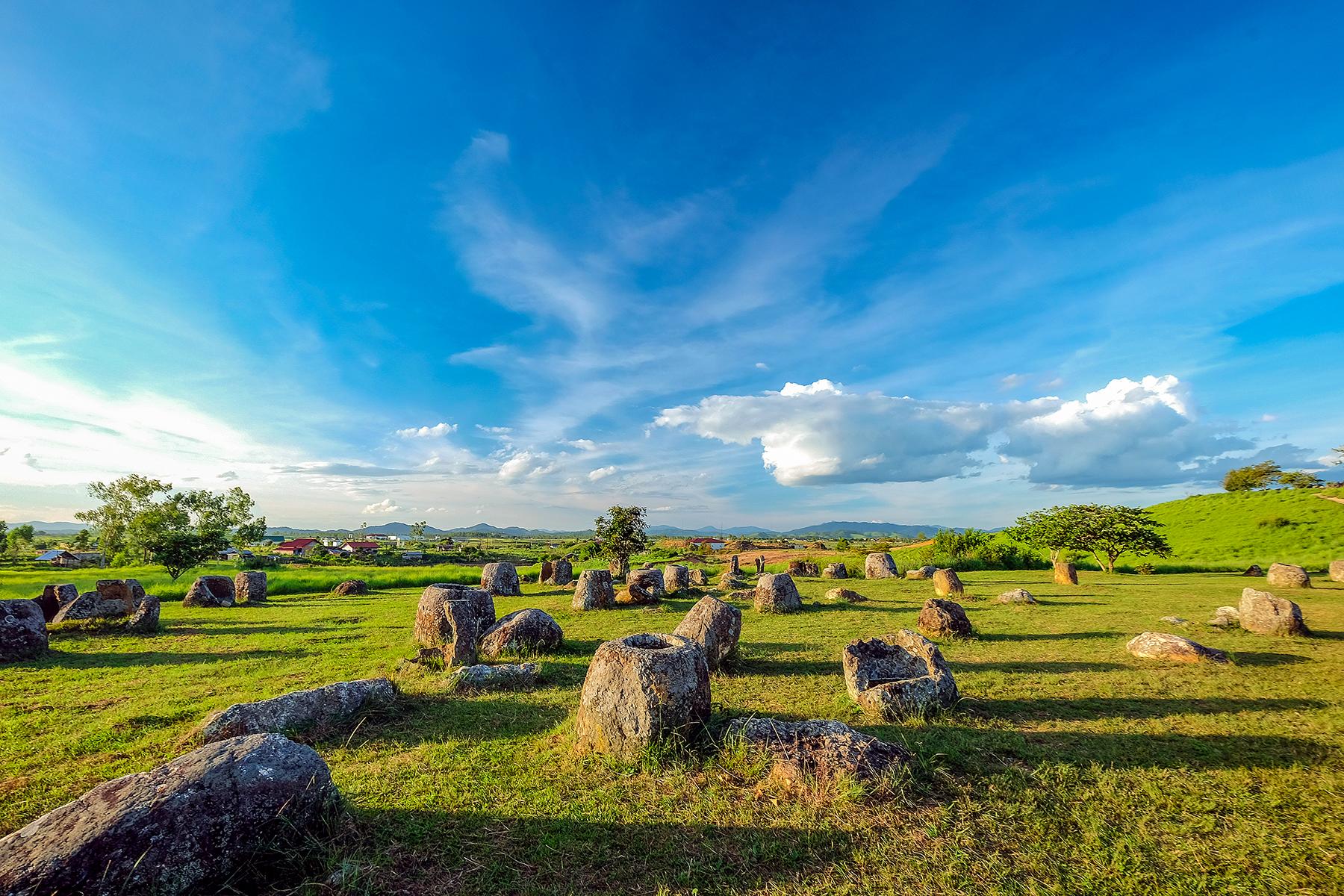 The Plain of Jars is an estimated 90 sites around the town of Phonsavan, Laos, with hundreds, possibly thousands, of ancient stone jars strewn across fields. Most of the jars are made of sandstone, estimated to be 1,500-2,000 years old, and are three to 10 feet tall, weighing up to 14 tons. The origins and purpose of the jars remain a mystery, but there are a few theories—the jars were used to store rice wine; they were used to collect rainwater—but the strongest is that they were funerary urns, a theory dating to the 1930s when French archaeologist Madeleine Colani visited the site and found human remains in nearby caves. The stone disks you’ll see on the ground are thought by some to be jar lids and by other researchers to be burial markers. Wandering among the enormous jars, you’ll see bomb craters and jars smashed by bombs. These are remnants of the Secret War, a massive strafing of Laos in the 1960s and 70s, as are the many UXO (unexploded ordnance) that litter the country. Learn more at the UXO Visitor Center and next door at Mines Advisory Group.

INSIDER TIPSites 1, 2, and 3 make up the main loop, with Site 1 being the busiest (though still fairly empty), because it’s closest to town. You can book a half day tour, sometimes including lunch, when you get to Phonsavan. There are lovely hikes from Sites 2 and 3, but a guide is crucial and will give you a great history lesson while you romp through the countryside. 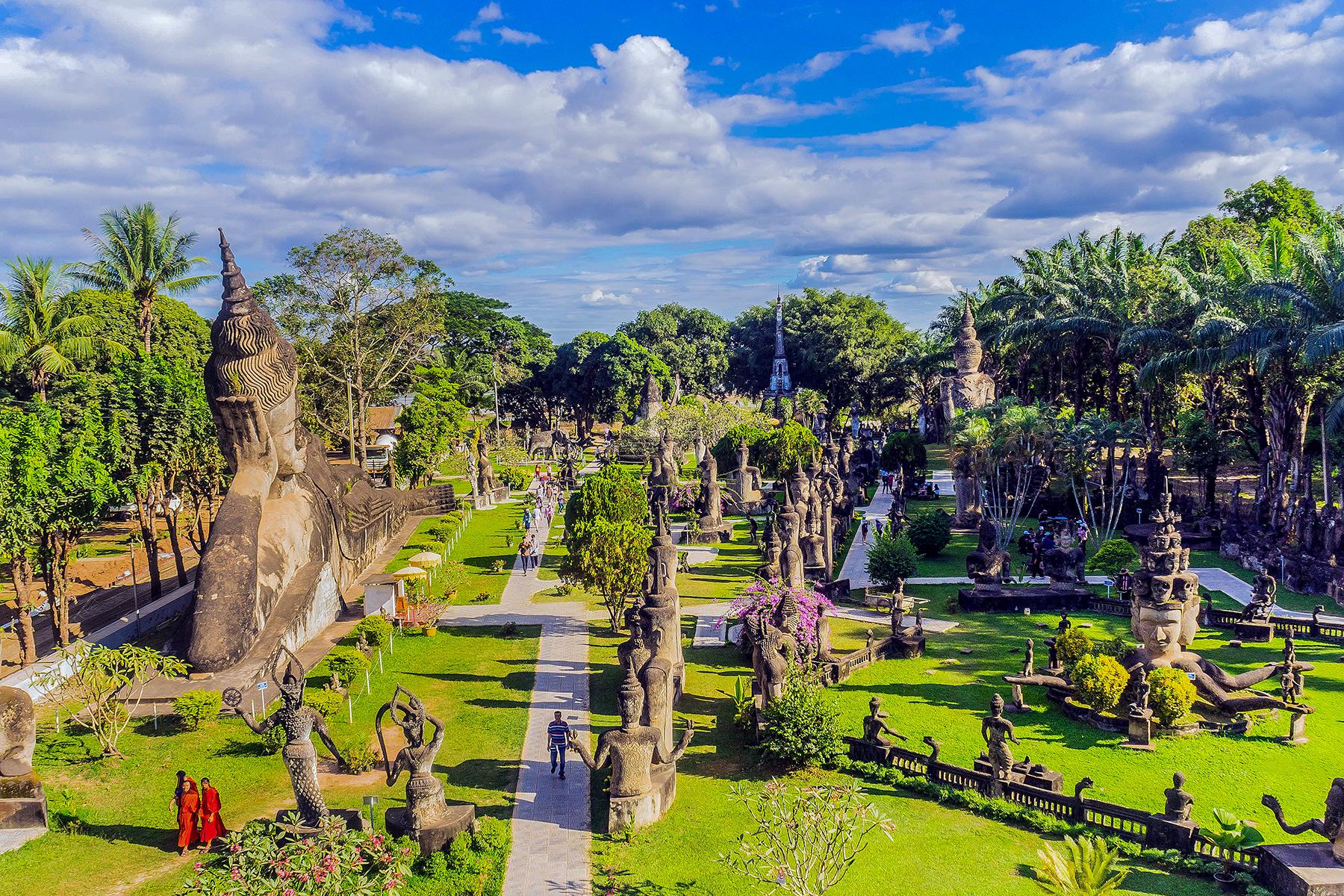 Just in from the Mekong and right across from the Thai border is this small sculpture park, known to locals as Xieng Khuan. There are some 200 Buddhist and Hindu sculptures here, and though they look ancient, most date to the late 1950s. The park is the work of the late shaman-artist Bounleua Sulilat and his students, and it’s delightfully trippy. There are Buddhas in all sizes and poses, a sculpture of Hindu deity Indra riding three-headed elephant Erawan, and the showpiece of the park: a giant pumpkin with a demon head. Enter through its mouth and climb past the three floors—representing Hell, Heaven, and Earth—to the top level platform from which there’s a view of the whole park. Sulilat fled to Thailand in the mid-1970s ahead of Pathet Lao, and so there’s a sister park, Sala Keoku, across the border. 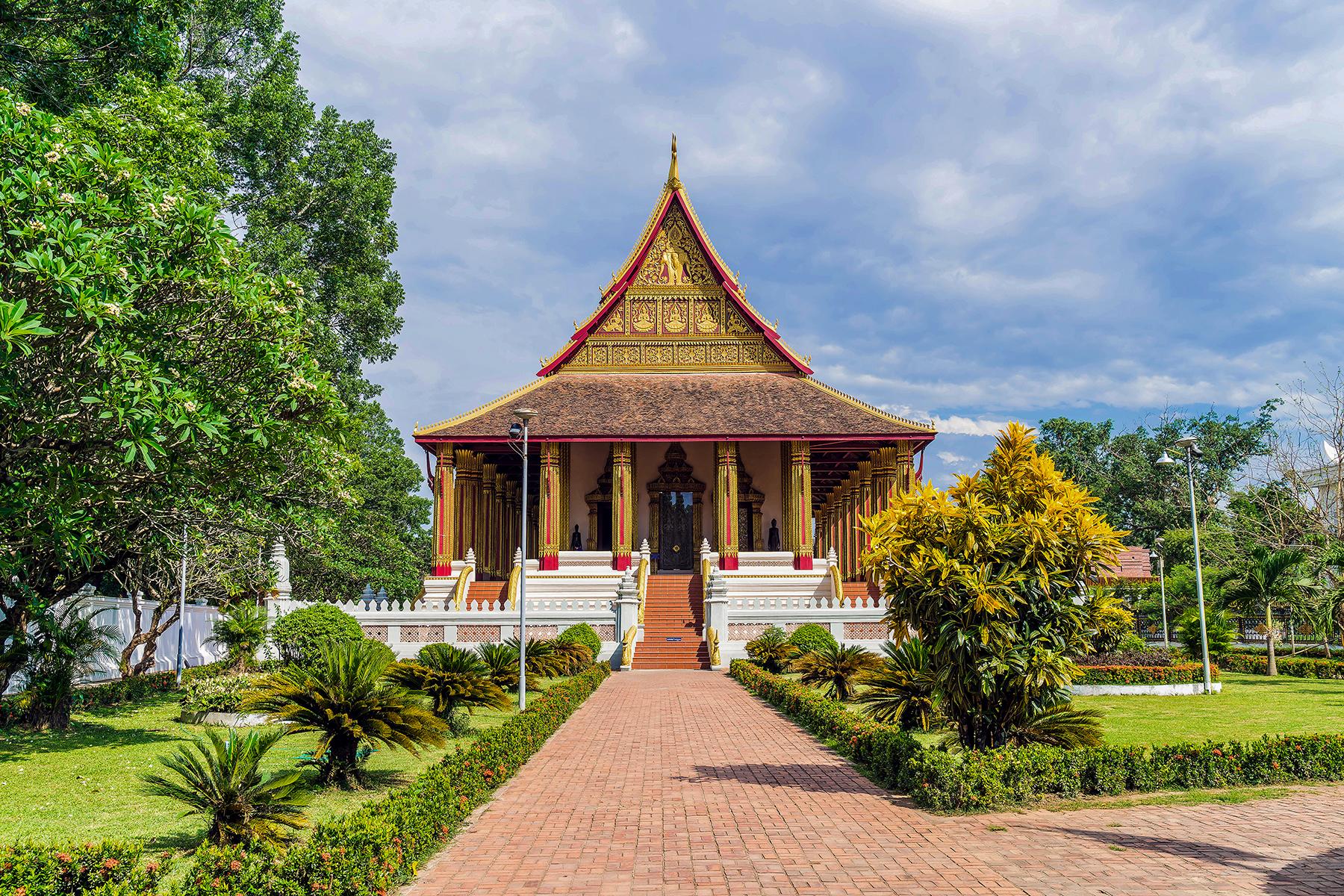 Temple-turned-museum Haw Phra Kaew was built in 1565 to house the two-foot-tall Emerald Buddha, carved from a block of jade. The Buddha has always belonged to Thailand but lived in what is today Vientiane for more than 200 years, after then-king Setthathirath, who also built Pha That Luang, brought the statue over. Just as with Pha That Luang, Haw Phra Kaew was destroyed by Siamese invaders, and what you see today is a restoration by the French in the late 1930s and early 1940s. Today, the Buddha lives at the Grand Palace in Bangkok, and Haw Phra Kaew displays religious relics and artwork. 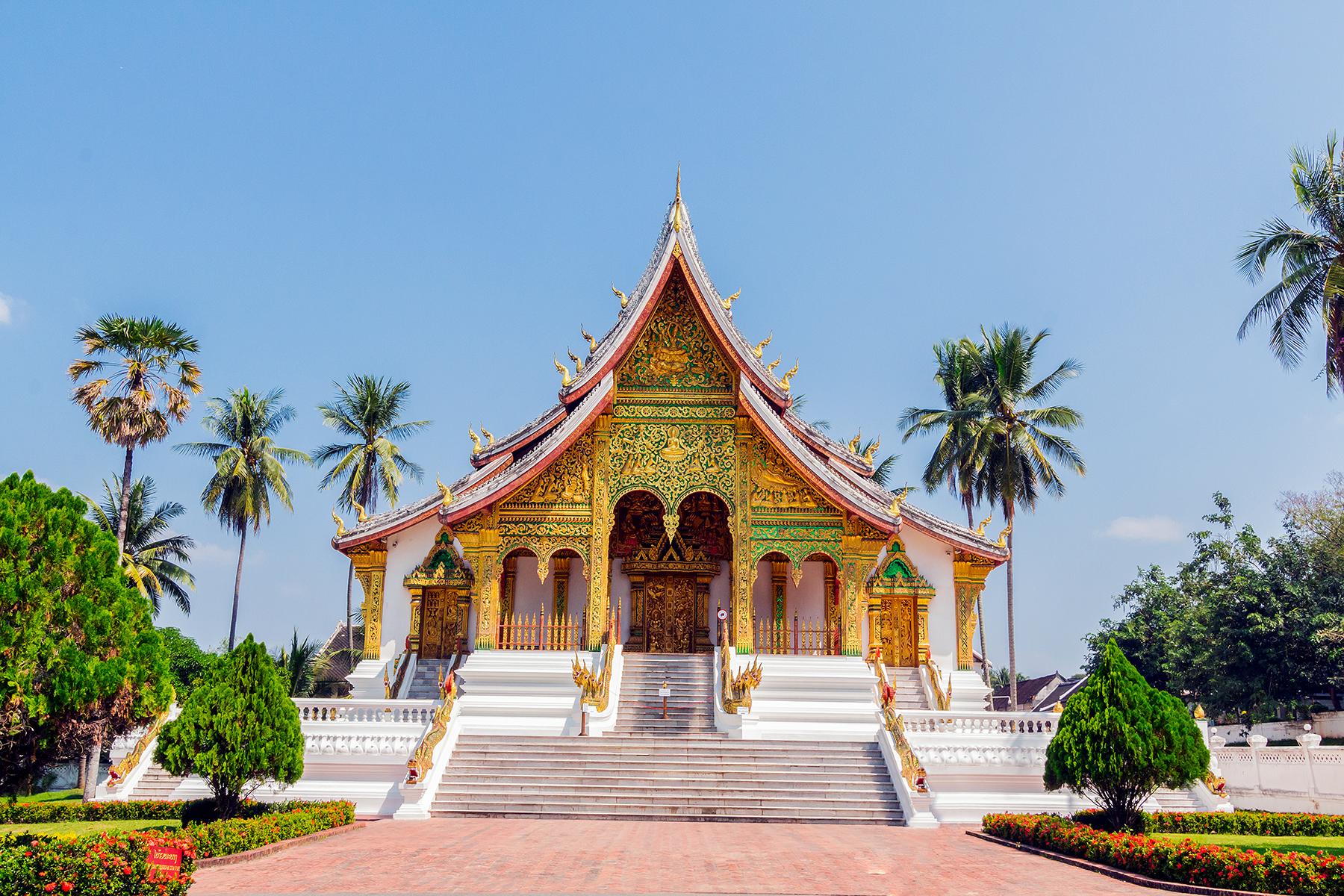 This temple on the grounds of the Royal Palace was built to house Phra Bang Buddha, a nearly three-foot-tall, 100-plus-pound gold image of Buddha. It’s believed to have been cast in Sri Lanka, brought to Luang Prabang from Cambodia in 1359, swiped by Siamese (Thai) marauders in 1779, and finally taken back to Laos in 1867. The temple is far newer, finished in 2006, though construction began in the 60s but came to a standstill when the Pathet Lao came to power. Its interior is a very pretty symphony of red and gold.

INSIDER TIPIn the hour or two before sunset, you can visit Wat Mai, the Royal Palace, and Wat Ho Pha Bang before heading up Phu Si. For a break in between, cool off with a smoothie at L’etranger Books and Tea, behind Phu Si. 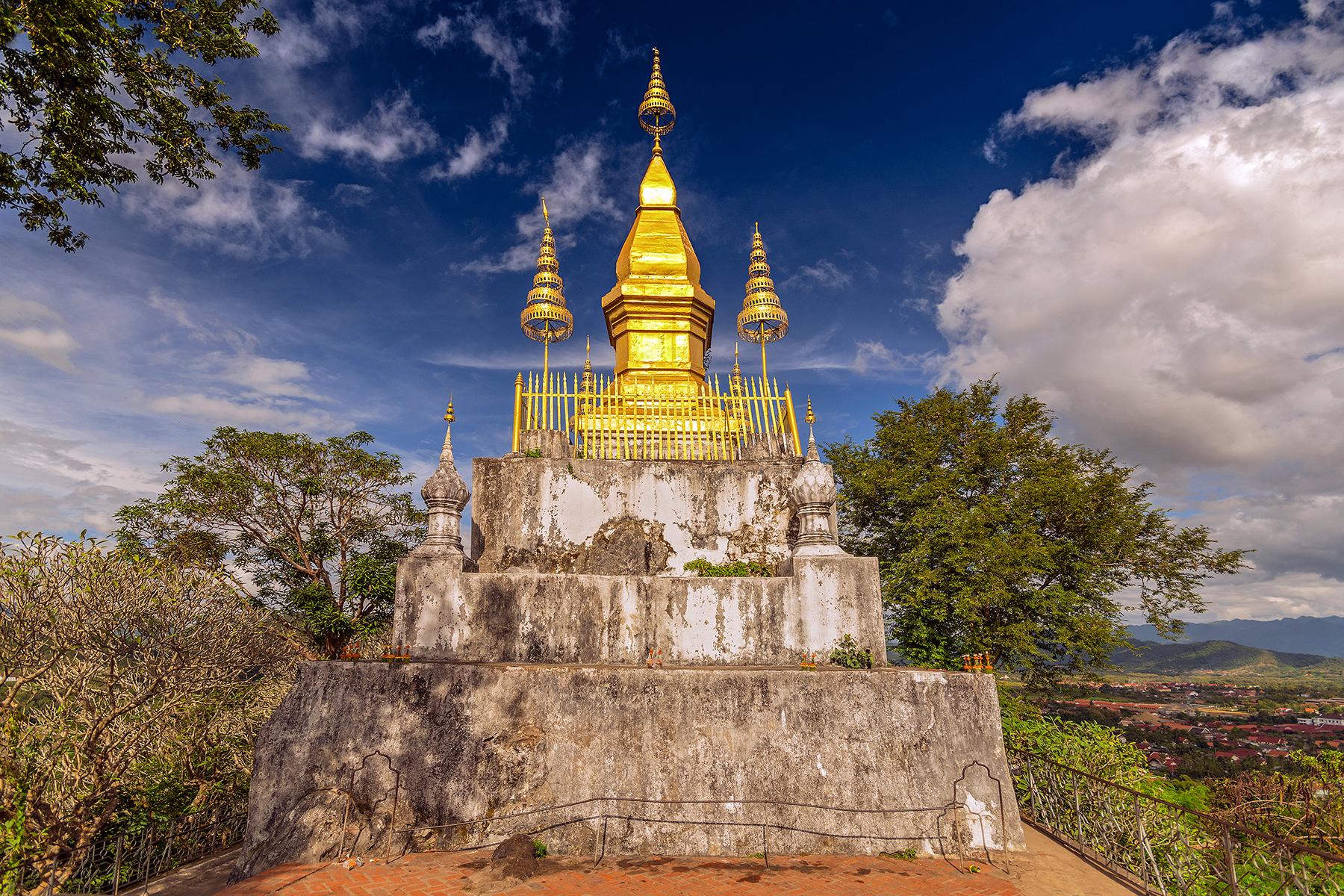 Ask where to watch the sunrise in Luang Prabang and you’ll be told Phu Si, the hill on which stupa That Chomsi sits. The stupa is modest, with a dozen gold Buddhas and offerings residing in its simple hall, but everyone comes here for the sweeping views from atop the hill. The climb to the top is 328 steps—or take the more pleasant backside hiking path—but it’s worth the sweat: from up here, shoulder to shoulder with your fellow tourists, you can watch the fiery sun melt into the green mountains framing the stupa, the light catching beautifully on thickets of shaggy trees.

INSIDER TIPSunset is the crowd pleaser and usually more impressive than sunrise, but to visit the stupa and begin the day in relative peace and quiet, come at sunrise. 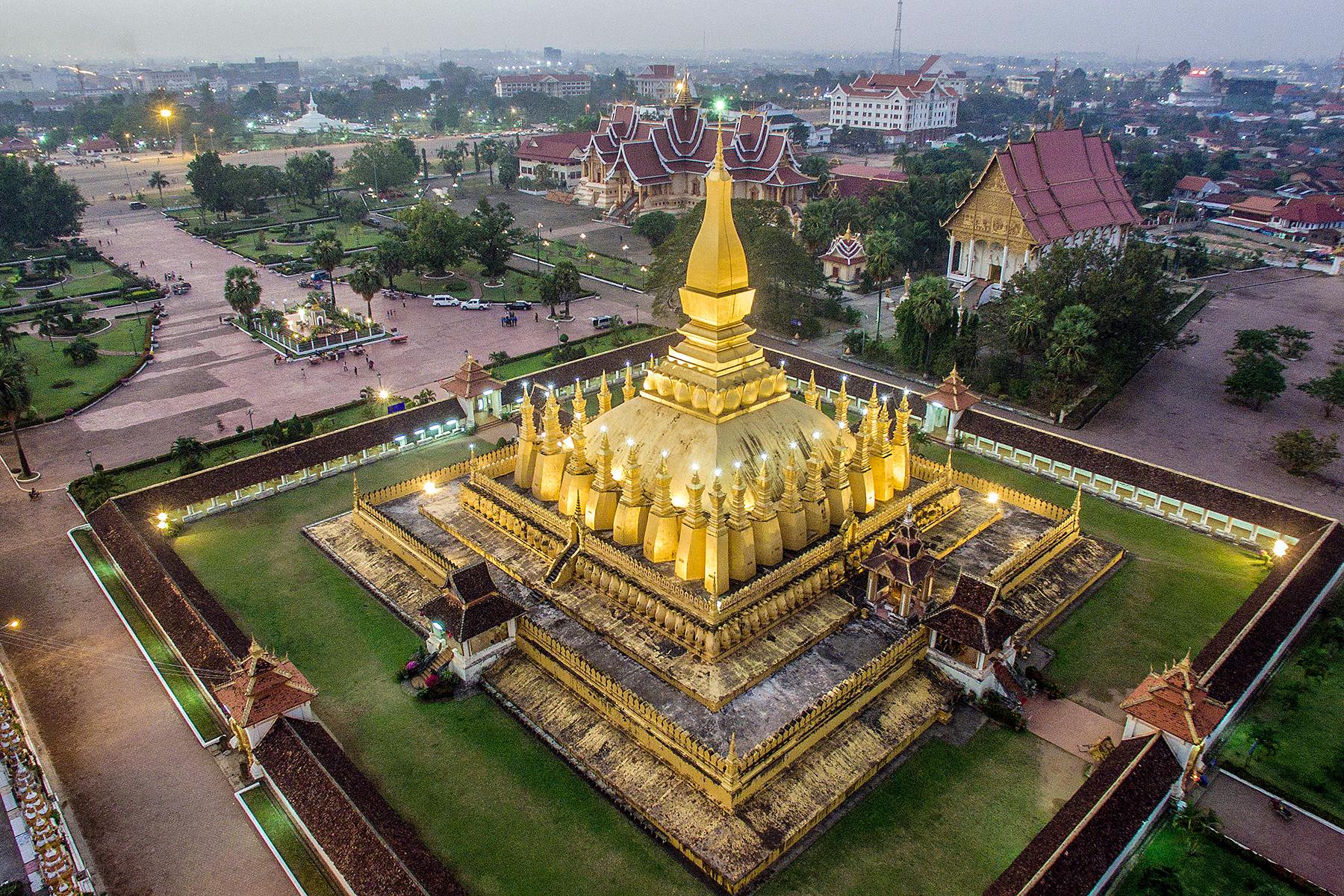 PHOTO: Drone By Jettana/Shutterstock
7 OF 10

You can’t miss massive Pha That Luang, a 147-foot-high gilded stupa 10 minutes’ ride (tuk-tuk or songthaew) from the city center. The stupa and its surrounding wall of 30 smaller stupas are covered in 1,100 pounds of gold leaf. Phat That Luang was built in 1566 by King Setthathirath and has been rebuilt over time after pillaging and damage, especially in 1827, when Vientiane was razed by then-Siam-now-Thailand. It was the French who rebuilt the temple in the 1930s. The complex, with beautifully-manicured grounds, includes two temple halls (of the original four), a few small stupas, and a long reclining Buddha.

INSIDER TIPThings really come alive at Pha That Luang with candlelight processions and traditional song and dance during the week-long full moon festival Boon That, usually in November. 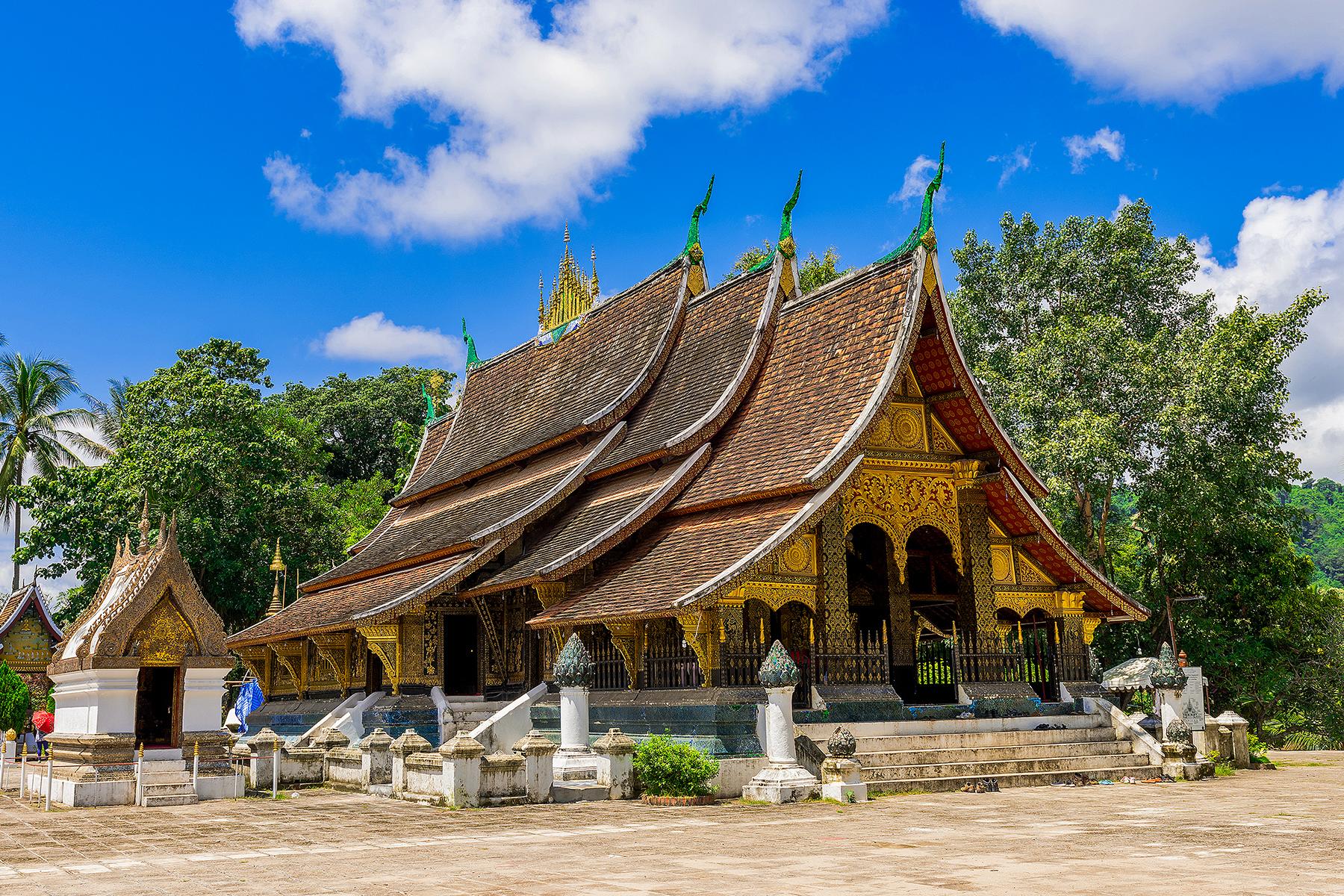 On the far end of Luang Prabang’s old town, where the Mekong and Nam Kahn rivers meet, is the city’s most important temple complex, Wat Xieng Thong. Here there’s the main temple (built in 1560), which has managed to survive invaders from China, Vietnam, and then-Siam (now Thailand) and three small chapels. In the main building are murals in gold and mosaic tile, including one of the “tree of life” and another, in celebration of Buddha’s 2,500th birthday, showing local village life. One chapel has a 16th-century reclining Buddha in bronze; another has a 40-foot-long wooden boat used by the royal family as a hearse.

INSIDER TIPThe easiest way to get here, unless you’re staying nearby, is by renting a bike. Come in the morning or for lunch and tuck into a bowl of khao piak sen (rice noodles in chicken broth with chicken, pork, or egg, bean sprouts, fried garlic, and green onion) at Xieng Thong Noodle, just around the corner from the temple. 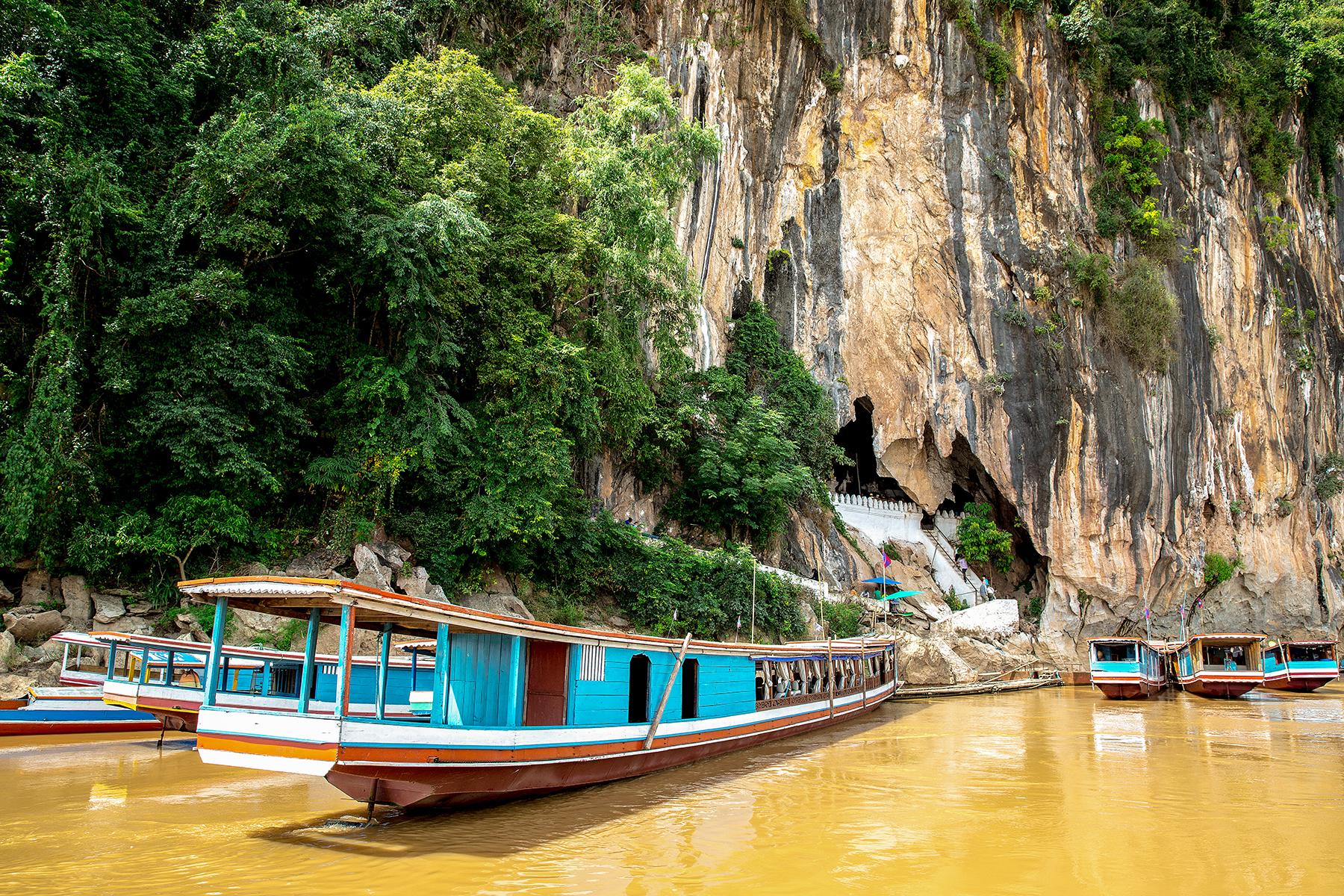 Pak Ou Caves and the surrounding area makes a nice half day trip out of Luang Prabang if you’ve got time, and it’s easy to organize on your own. The caves sit in limestone cliffs above where the Mekong and Nam Ou rivers meet. The two caves are filled with thousands of 16th-century Buddha statues. Both caves are reached by staircases, so the climb isn’t difficult; your entrance fee includes a guide and flashlight, which you’ll need for the dark upper cave. You can take a car or tuk-tuk to the caves (55min) and then grab a boat across the river, but a tranquil boat ride (2h) along the Mekong is the way to go. Any tour agency can book a half- or full-day trip, which includes Ban Xang Hai (Whiskey Village) and sometimes Kuang Si waterfalls. You can cut down on the cost by hopping on a group boat right at the dock (usually 8:30 am)—though be aware this includes stops—or set your own schedule by hiring a boat. The dock is at Ferry Tourism Service, opposite the excellent Saffron Coffee. 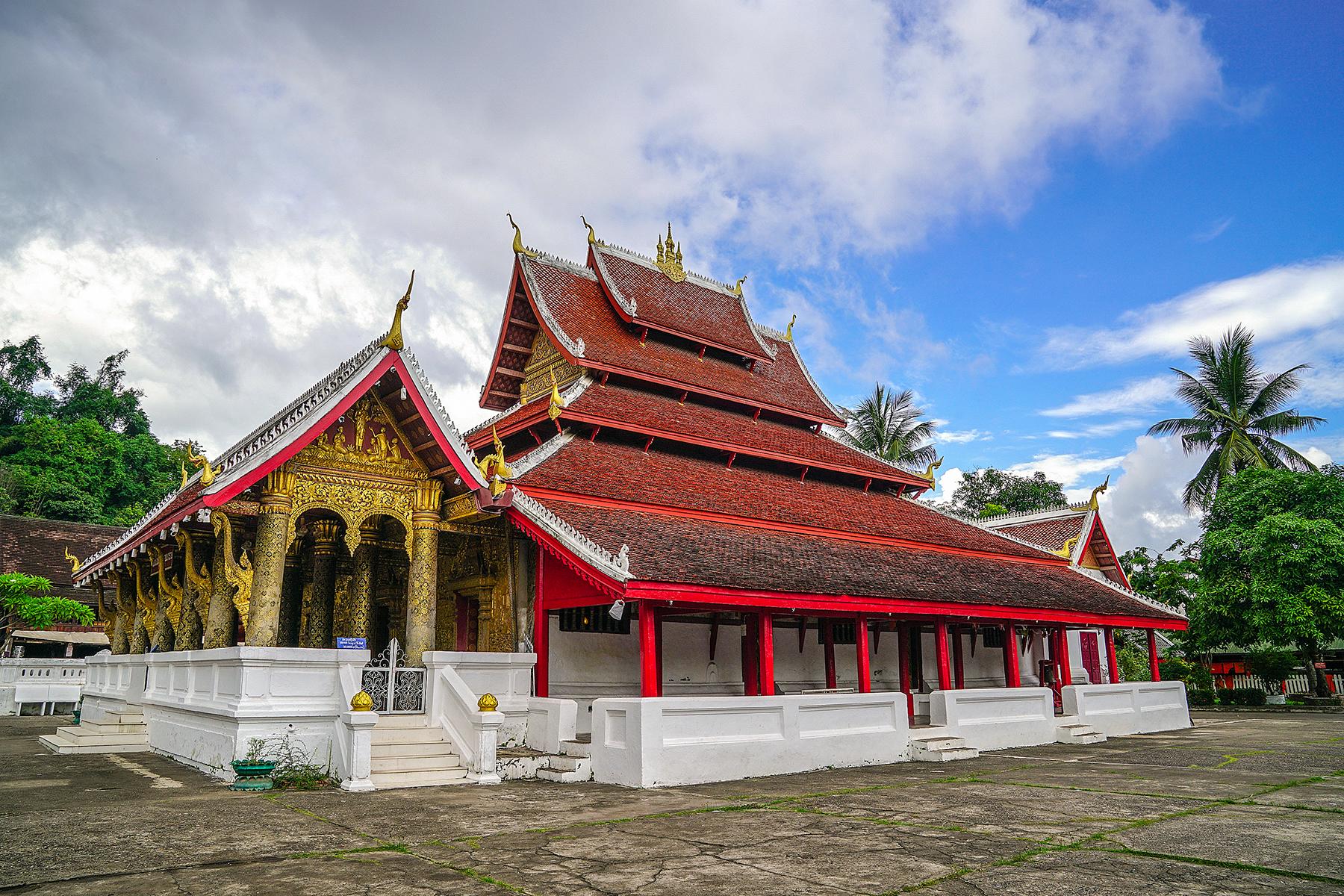 Wat Mai is right in the middle of Luang Prabang’s old town, so it’s easy to pop in any time. The late 18th-century temple is next to the former royal palace and is sufficiently ornate, positively oozing gold, a pretty contrast to red and black lacquer. The wood carvings and gold leaf murals, including one depicting Buddha’s birth, are superb. This is one of Luang Prabang’s few temples to survive the 1887 invasion and destruction of many Buddhist temples by Chinese gangs. If you’re short on time, go to Wat Mai right before watching the sunset or sunrise (far less crowded) from atop the adjacent Phu Si hill. The climb to the top is 328 steps from the front entrance or by a slightly gentler trail on the back side, but either way, flip flops won’t cut it.