Japan's Sanjuro cat has A LOT to purr about.

It was built to repel bloodshed and chaos: a mighty hilltop fortress that for centuries was home to violent warlords. Yet somehow Japan’s only remaining mountain castle has now been conquered by a celebrity cat.

Despite its majestic appearance and extraordinary history, Bitchu Matsuyama Castle has always attracted few tourists due to its isolated location, hidden amid forested mountains in southern Japan.

Not long before the pandemic began, local tourist authorities devised an unusual strategy to attract visitors to their town of Takahashi and this castle, which looms over it. Takahashi authorities sought publicity by handing control of their castle over to an orange-and-white feline called Sanjuro.

Most cats are famously laidback and lazy, with their responsibilities barely extending beyond sleeping, eating, and purring. Sanjuro is different. Very different. His name alone gives that away. This cat is named after Sanjuro Tani, the fearsome warrior who led the Takahashi branch of the Shinsengumi, a short-lived and mysterious Japanese police force tasked with quelling an uprising and executing dissidents in the 1860s.

As if that wasn’t a big enough honor for this cat, he’s also been named the owner of Bitchu Matsuyama Castle, which is located about 20 miles from the city of Okayama. Sanjuro is the official “Lord of the Castle.” He even has his own memorabilia. For $3, visitors to Takahashi can purchase a sheet of stamps that features both Sanjuro’s paw print and an image of him lying on his back.

Arts & Culture Sanskrita Bharadwaj Who's Behind These Giant Stone Carvings?
Continue Reading Article After Our Video

There is even a question and answer session with Sanjuro on the official Bitchu Matsuyama Castle website. There, he describes how he found the castle in July 2018 while wandering the forest following a major storm. After becoming popular with locals and tourists to the castle, Sanjuro went missing in November 2018, causing concern. When he reappeared the next month, Takahashi authorities celebrated by holding a ceremony and granting him lordship.

In that Q&A, Sanjuro reveals his daily schedule and how tourists can meet him. “I basically live in the castle,” Sanjuro explains. “I usually patrol the area surrounded by the castle wall at 10:00 and 14:00. These are the best times to be able to meet me! Please note that my course through the castle depends on how I am feeling. You can ask my caretaker where I am during my patrols.” 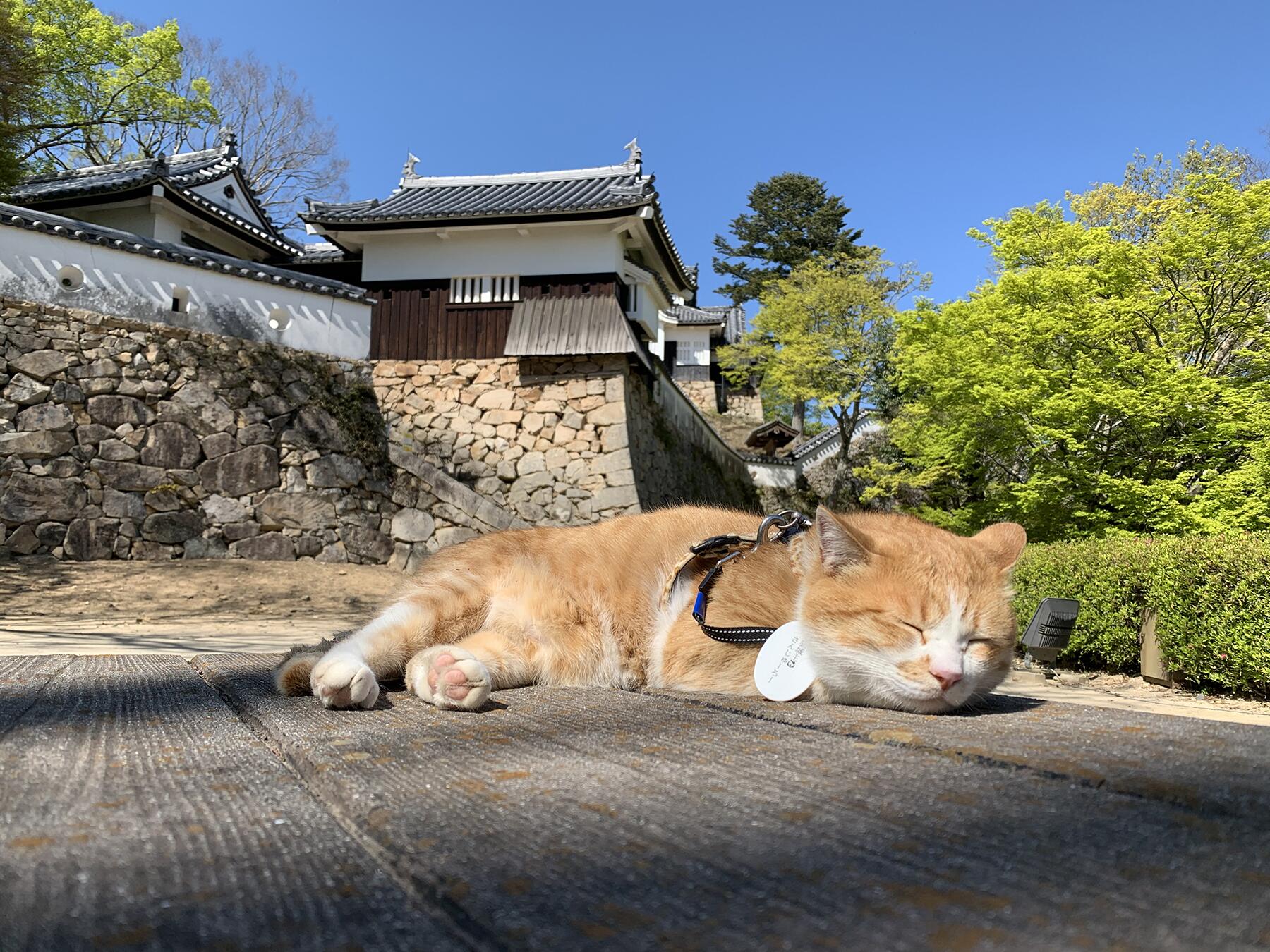 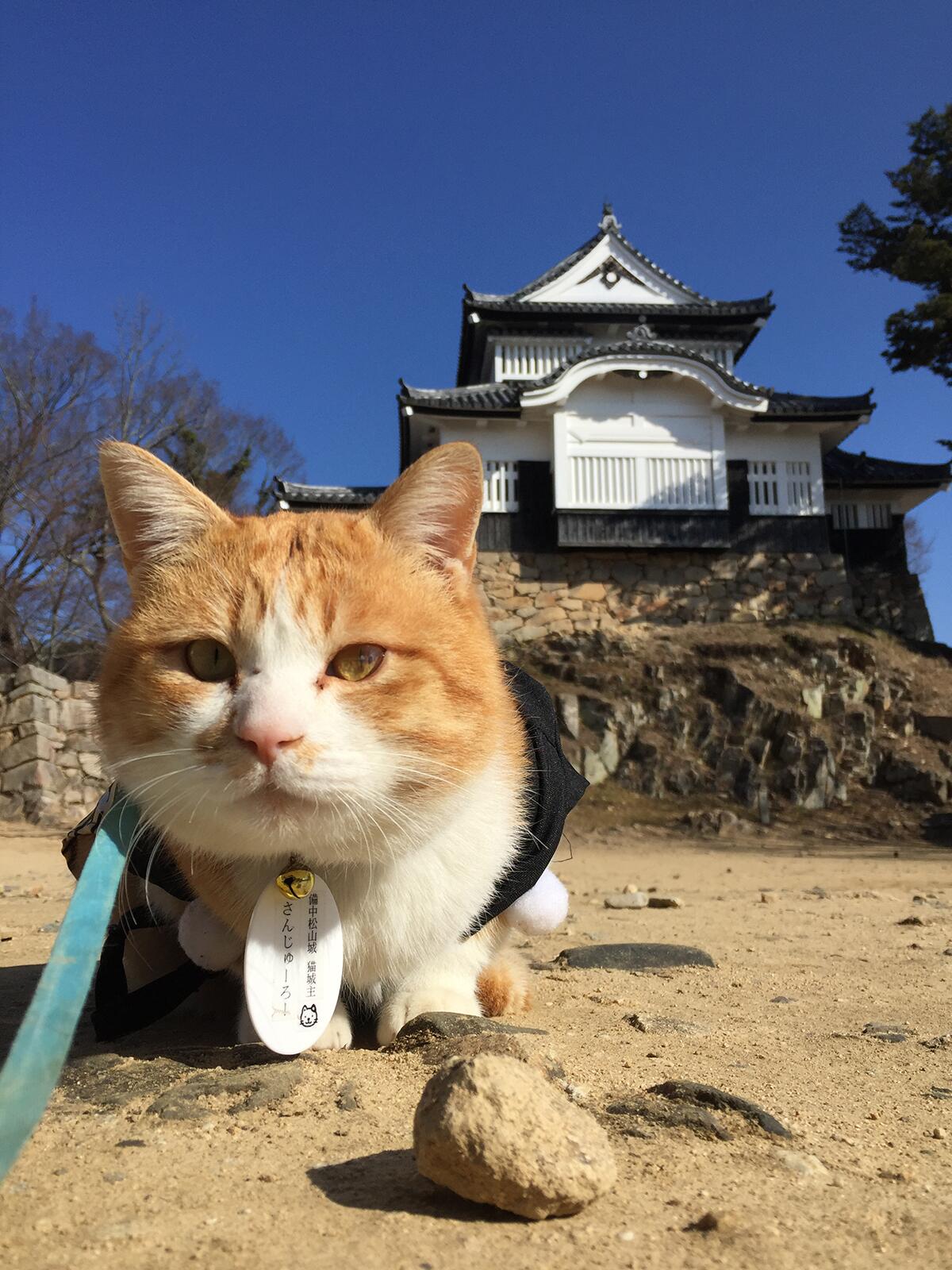 The oldest surviving mountain fortress in Japan, Bitchu Matsuyama exemplifies the early forms of Japanese castles. They were small fortresses built for violent conflict. It wasn’t until the 16th century that the nation’s castles began to be built on flatter land and became imposing administrative hubs of large towns. Even then, they were constructed with war in mind. When it was built almost 800 years ago, atop a 430m-high mountain, this castle was designed as a fortress, with its high position and steep access paths helping protect it against attacks.

While Japanese castles are renowned for their majestic appearances, most were not designed to be grand status symbols, unlike the magnificent castles in Europe. Instead, they were military structures created in response to a chaotic, bloody era in Japan’s history. From the mid-1400s to the late-1500s, Japan was in a state of turmoil during the Warring States Period.

This era saw many warlords and powerful families across the country fighting for power and land. These mighty figures gave their orders from behind the thick, high walls of castles, the designs of which evolved during this period to combat new styles of attack and weaponry. Most obviously, thicker stone perimeter walls were introduced. Their role was to try to protect the wooden facades of these castles from the fresh threat posed by cannons, which arrived from Europe in the 1500s.

This particular century was the peak period for Japanese castles when more than 1,000 existed across the country. Now, there are only 12 castles that have survived in their original form. Bitchu-Matsuyama is among the oldest of these remaining structures.

Most of them are larger than Sanjuro’s fortress, but none can match the natural splendor of its setting. The only way to access Bitchu Matsuyama castle is by completing a 20-minute hike up the hill from its car park. This walk takes visitors through an enchanting forest that changes color in the autumnal bloom.

These days, unannounced visitors are met not by furious Samurai, but by a friendly cat with a fancy title, a growing fan base, and his own line of stamps. In Takahashi, Sanjuro is the man.