In India's rural Malabar region, oracles dance among men in a Theyyam ceremony. Sugato Mukherjee, a photographer based in Calcutta, attended and photographed this vibrant folk tradition.

Theyyam is the corruption of the word “Daivam” in Malayalam, the state language of Kerala, India, where the Malabar region is located. It means “God.” Theyyam is a deep-rooted folk religion in Malabar, where an incredibly vibrant tradition has been practiced for the last 1,500 years.

The Theyyam practitioner, or the oracle, while in a state of exalted trance, becomes the physical manifestation of a deity. Every year, from November to April, an entire hierarchy of gods, goddesses, ancient heroes, demons, spirits, and other mythical beings is personified in Theyyam performances that occur in temples and kavus (small places of worship naturally surrounded by a forest or groves of trees).

The entranced oracle is believed to be possessed with divine powers that can heal, foretell the future, and confer blessings on devotees. In their daily lives, the oracles are mostly employed in mundane day jobs. But in their shamanistic avatar as the living god, the oracle undergoes a transcendental transformation. Interestingly, in this unique Malabari variant of shamanism, the oracles almost always play the role of a benevolent god, though the outward appearance often suggests otherwise. 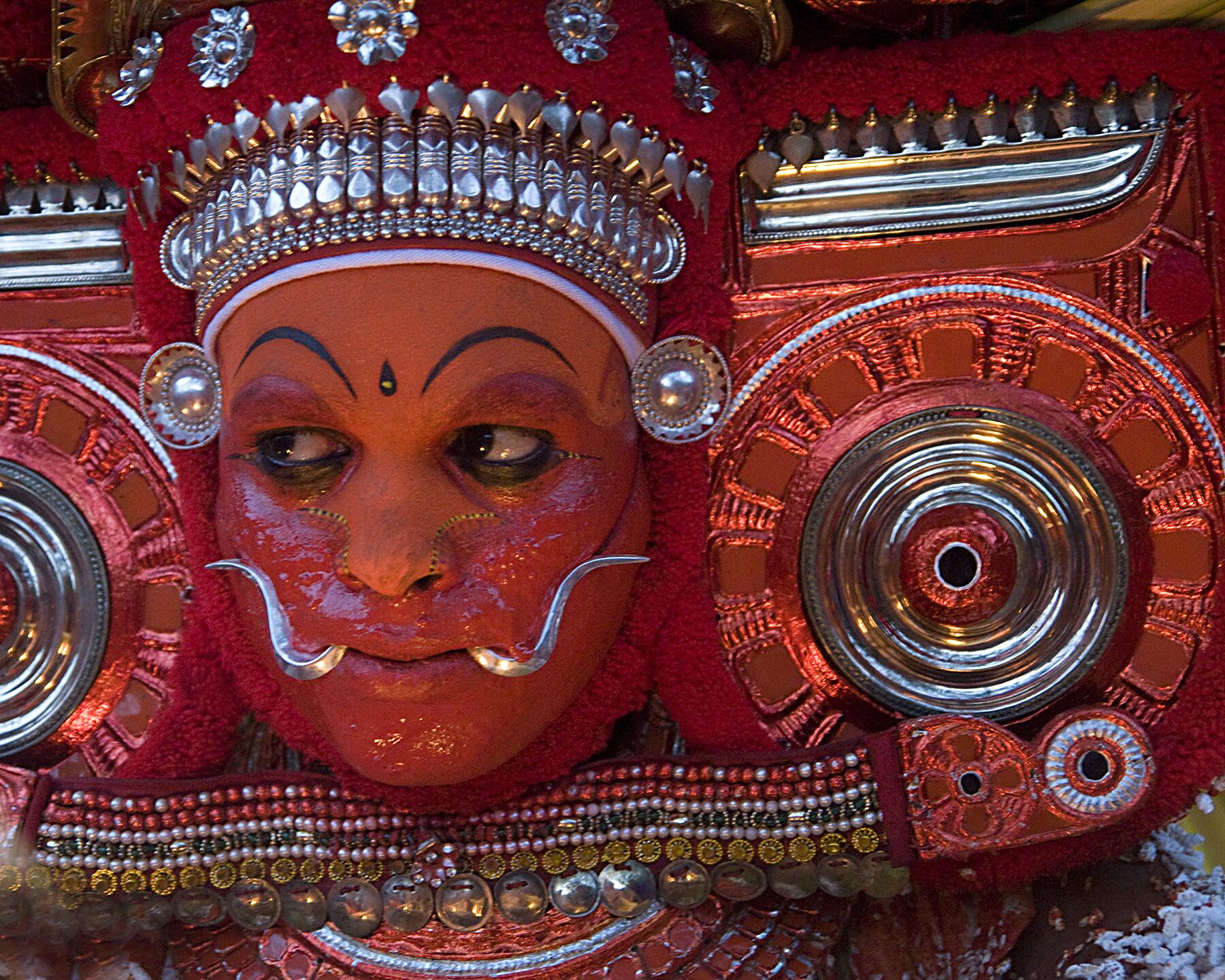 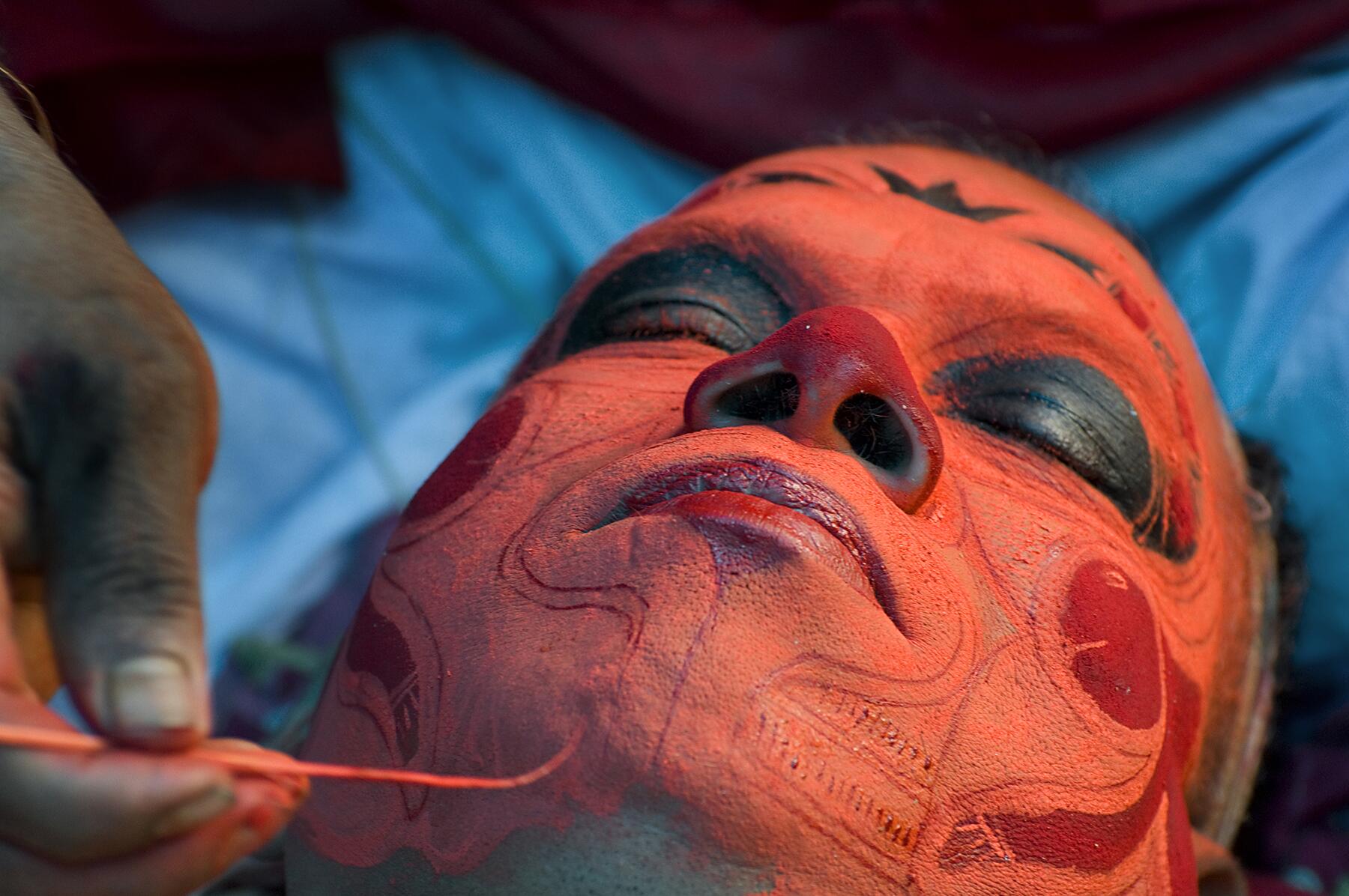 A colorful costume, silvery fangs, and silver diadems of serpentine heads on the headdress are the mark of a Theyyam. A visually rich culture with explosive colors of face- and body-painting of the practitioner, Theyyam is also a religious art with its dense layers of imagery and symbolism. An intense makeup session is an essential part of invoking the deity. Red, orange, and yellow are the traditional colors used for makeup with intricately designed loops and whorls that differentiate the incarnate deities. A slim strip of coconut leaf is used here to draw meticulous loops and whorls and spirals on the oracle’s cheeks, daubed in fluorescent orange paint. 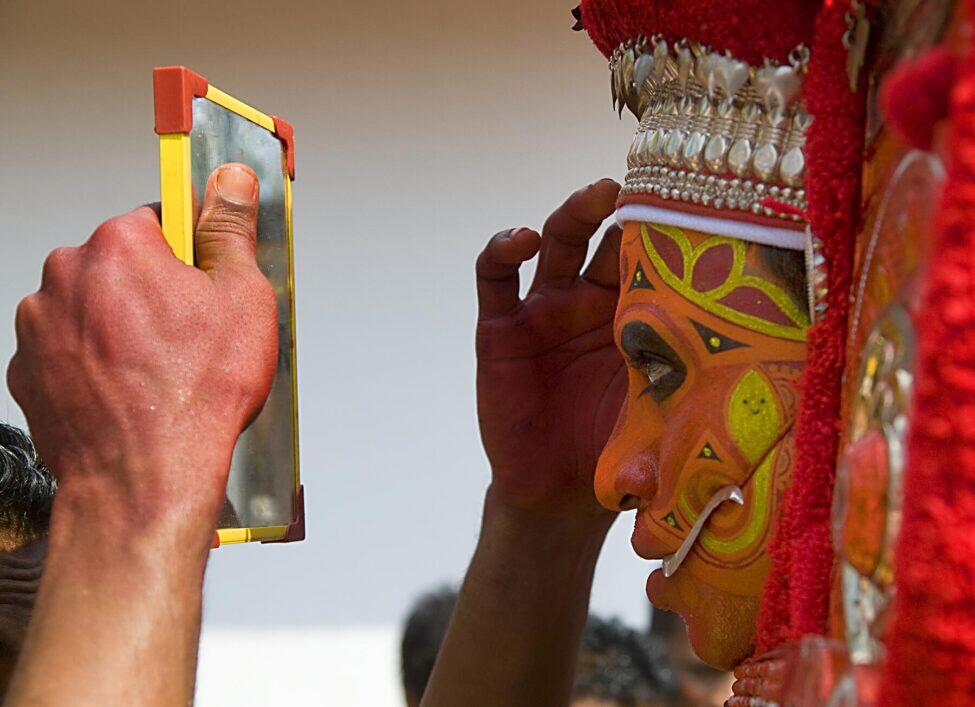 When not practicing the traditional dance form, the oracles lead ordinary lives as security guards, auto-rickshaw drivers, or construction workers. However, before performing the Theyyam, they make intense mental, physical, and spiritual preparations, including celibacy, in the weeks leading up to a performance. Traditionally, the deity is invoked into its flesh and blood template when, post-makeup, the Theyyam ceremonially gazes into a mirror and watches himself as the incarnate deity. Hereafter, he slowly enters into a trance. 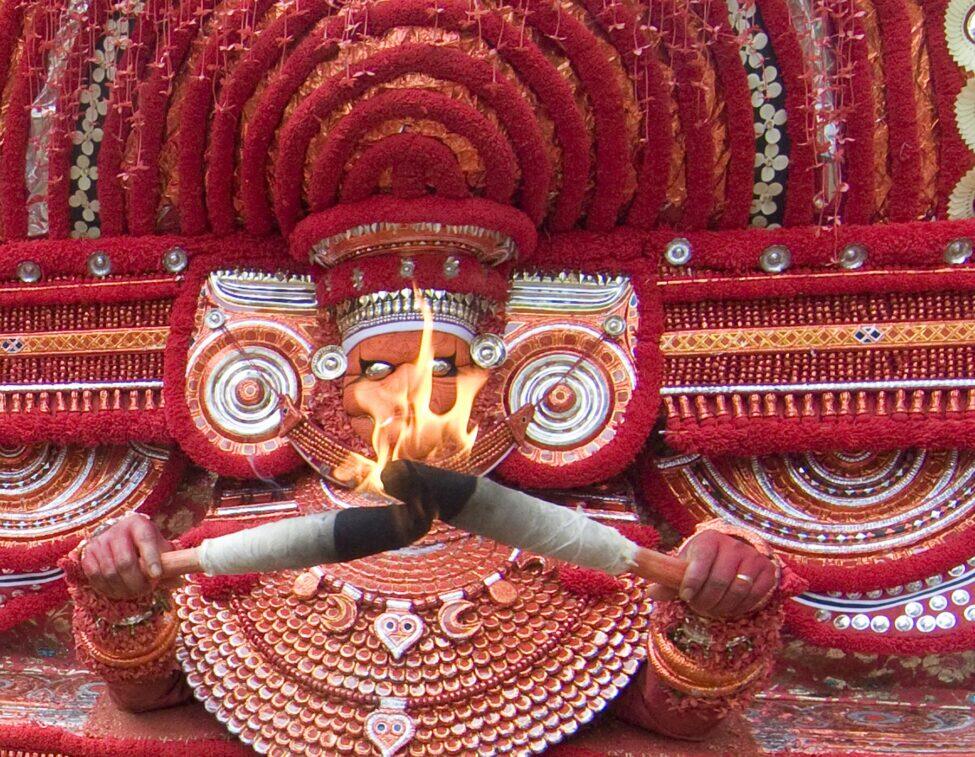 Theyyam costumes form an important part of this ancient tradition. Richly colored fabrics studded with glass balls are stitched with sheaths of palm leaves. The artisans belong to the same community as the oracles. 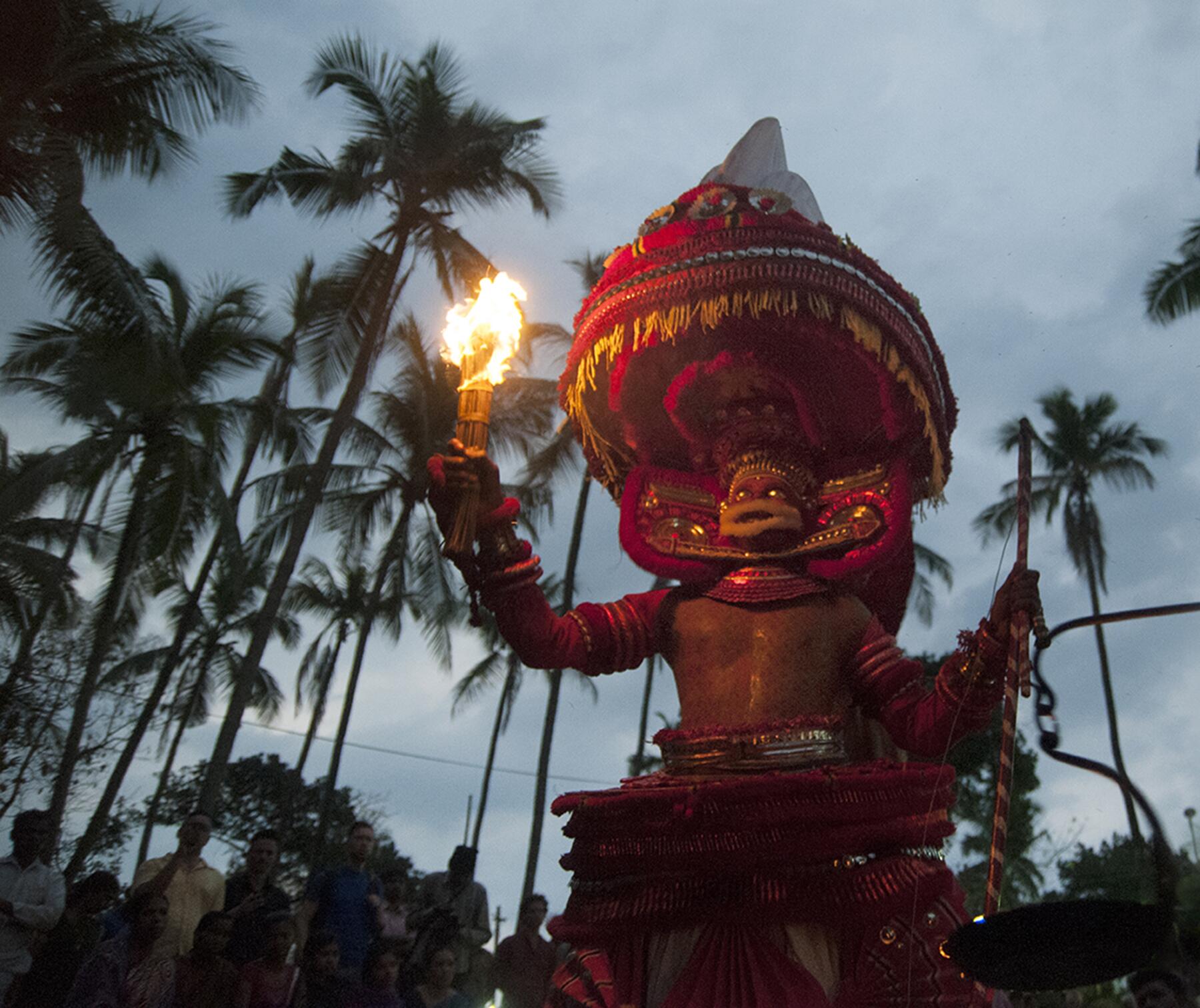 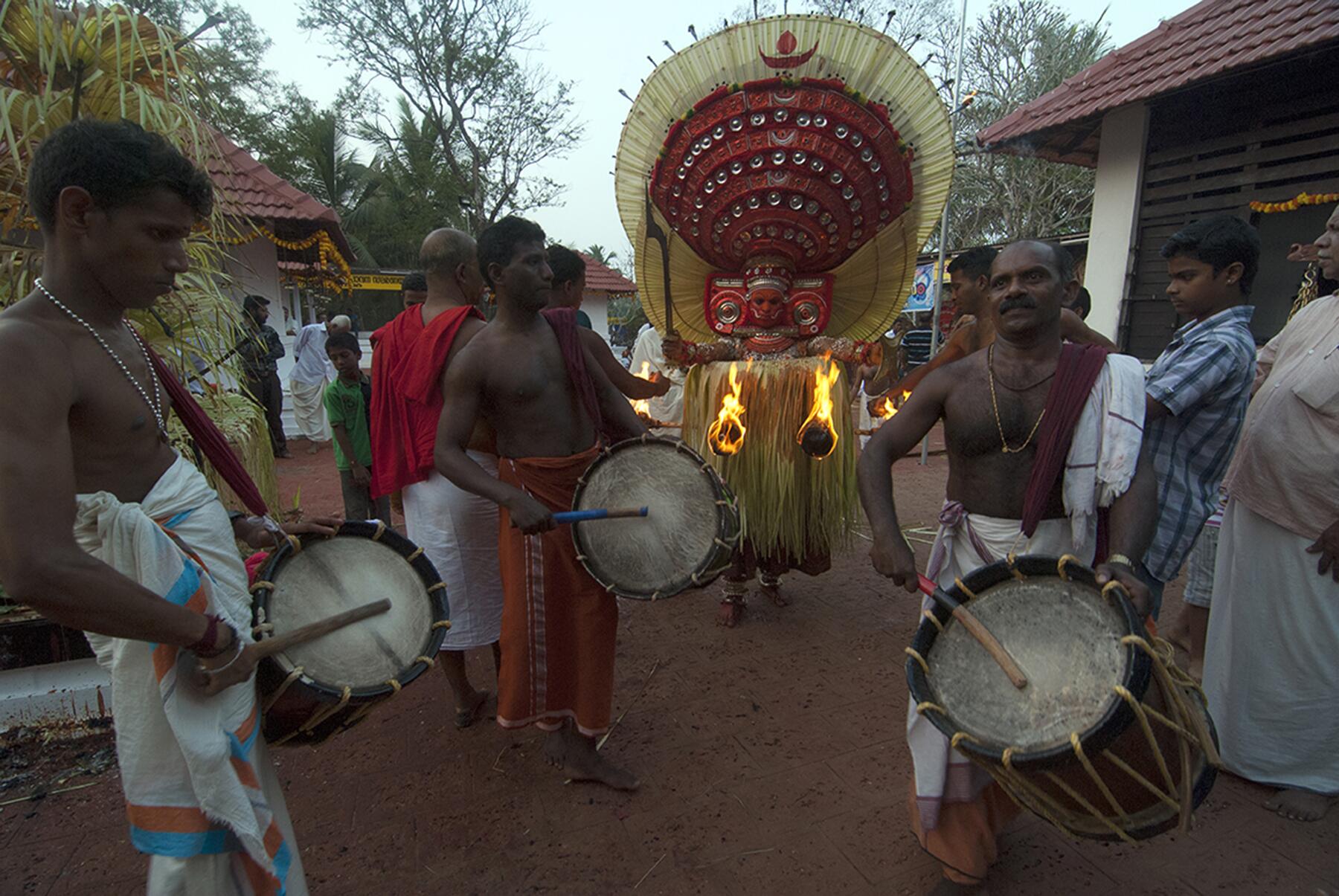 The oracle struts through the crowd in the courtyard of a forest kavu talking frenetically in a voice that is different from his own as people watch him reverentially. In this trance dance in the forest temple, the oracle is ushering in well-being and prosperity to the villages. Drawing huge crowds, Theyyam rituals are a vital part of community life in rural Malabar.  The occasion is marked by a sense of community spirit where people come forward to help with arrangements. The traditions and rituals of Theyyam have changed little over the years. 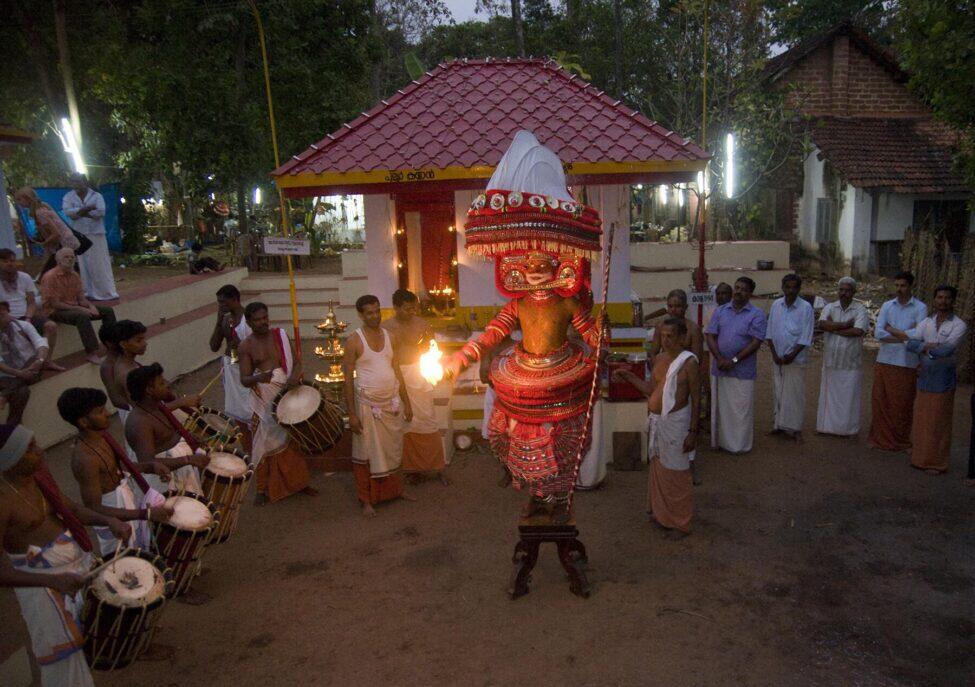 In a small village temple, an oracle dances to the rhythm of drums and other folk musical instruments, all accompanied by resonating chants. Musical accompaniment is an important feature in all Theyyams. 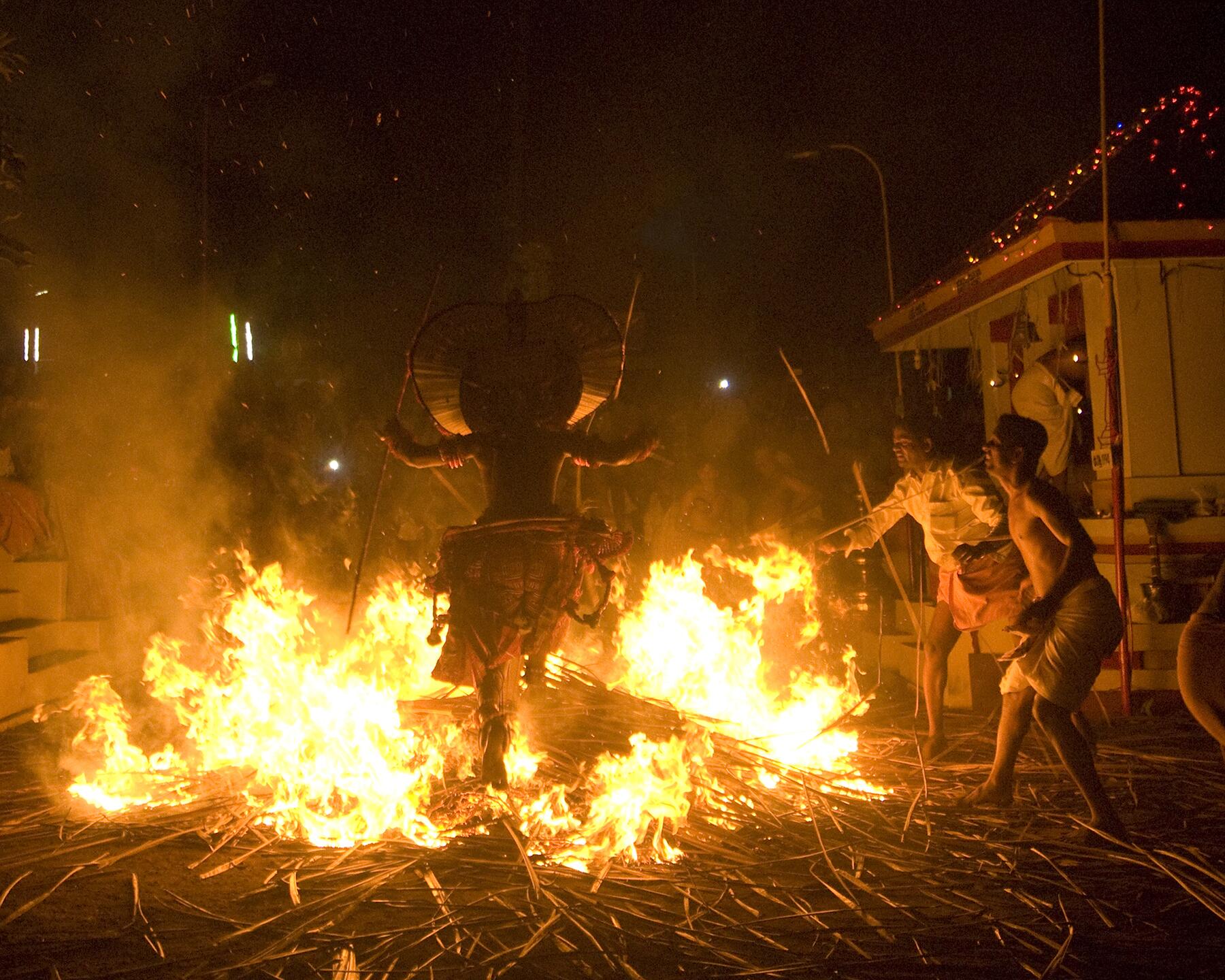 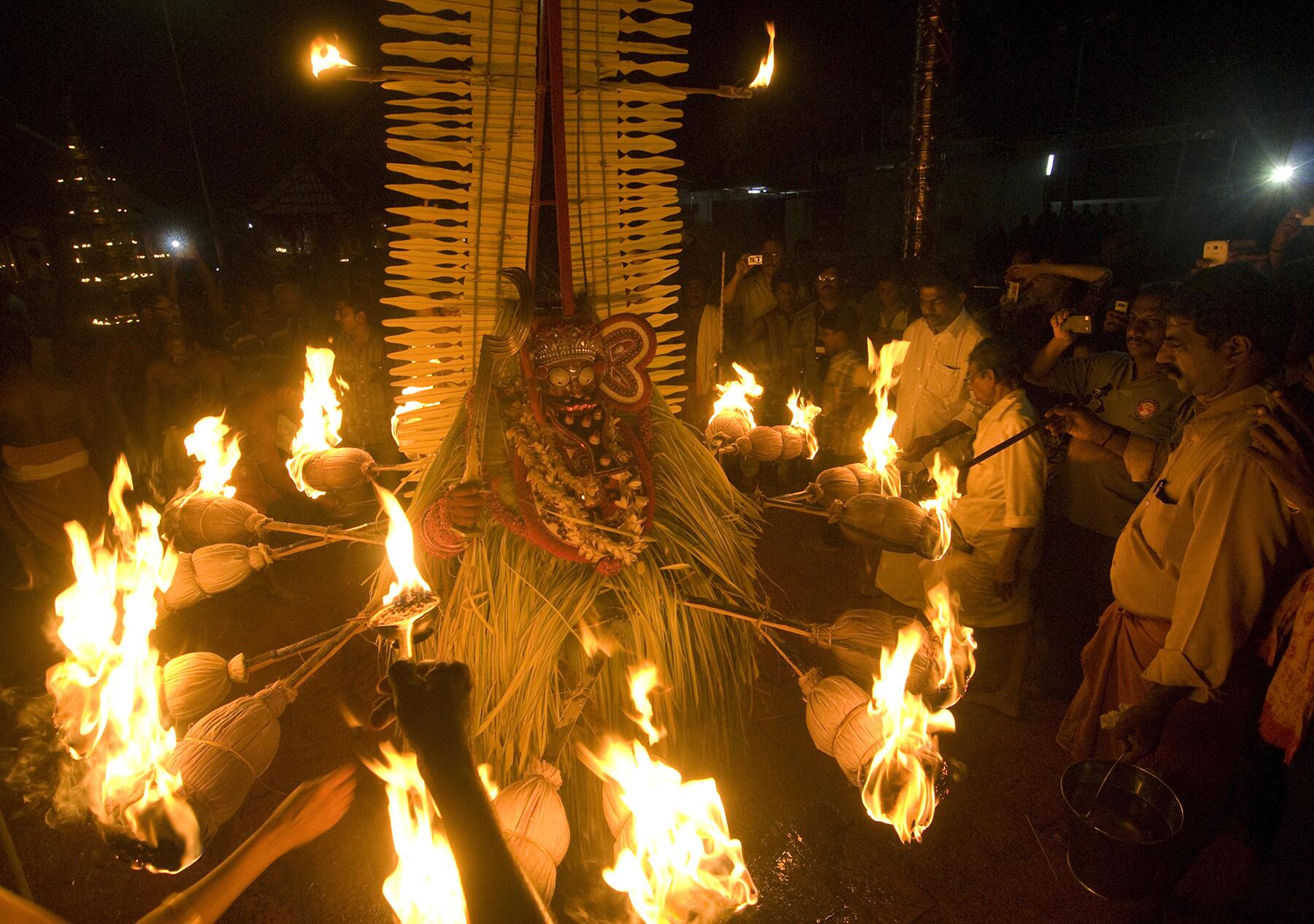 A fire Theyyam where the oracle, in his trance, repeatedly jumps through a bonfire, protected only by his waist dress woven out of tender coconut leaves to prevent from burns. Another fire Theyyam, where no less than 16 fire torches have been fixed around the waist of the Theyyam performer. Fire Theyyams usually occur during midnight or in the pre-dawn hours. 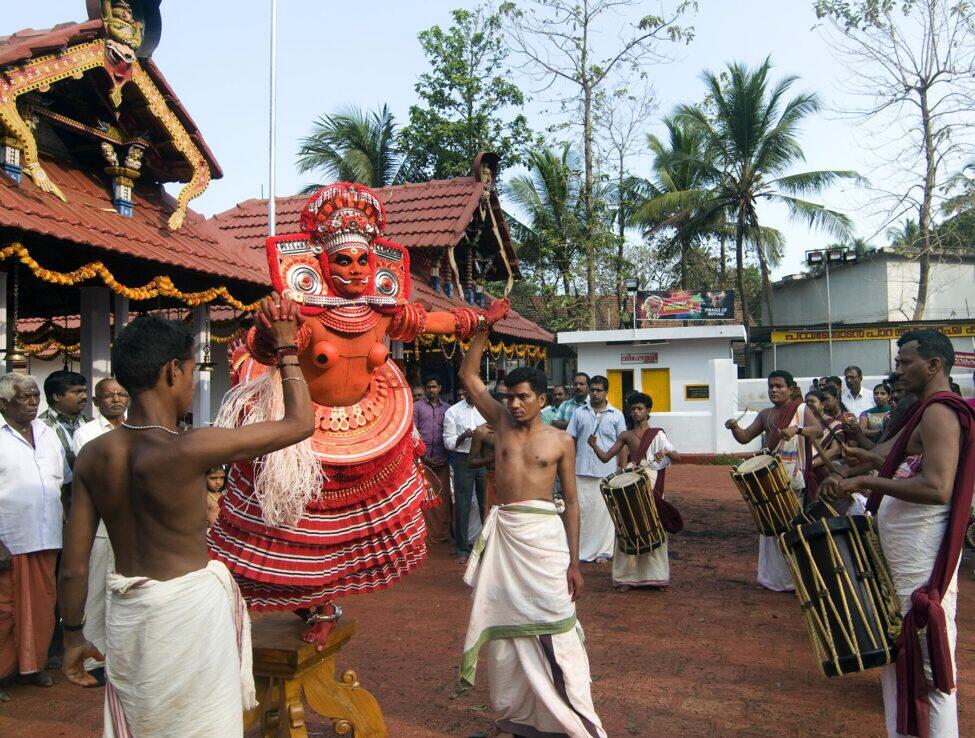 The wooden stool is a ceremonial feature in many Theyyam performances. A couple of servants of the god, known as kamerans, hold the oracle as he sways in his trance on the stool. While in trance, only the kamerans are allowed to touch the oracle. 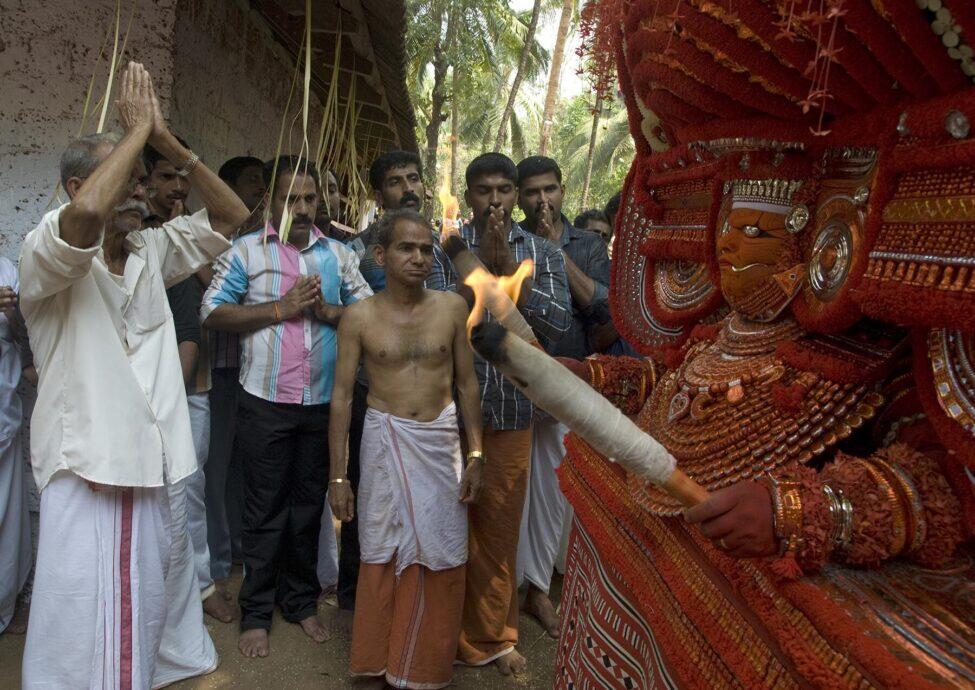 In his avatar of the living god, the oracle is worshipped by all classes of people and even by the Brahmins, those at the helm of Kerala’s caste system. The Theyyam performers are usually from socially disadvantaged caste groups. 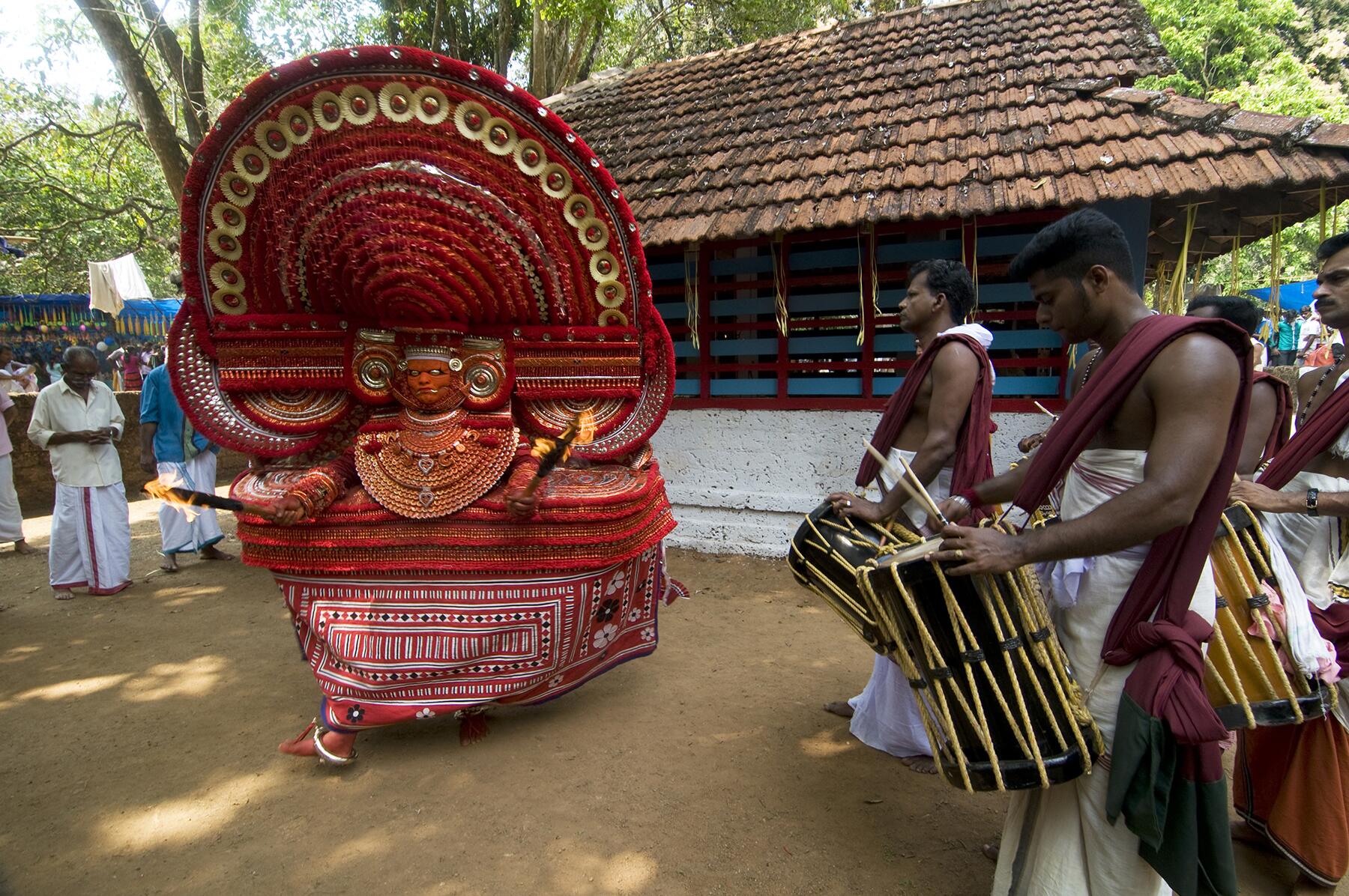 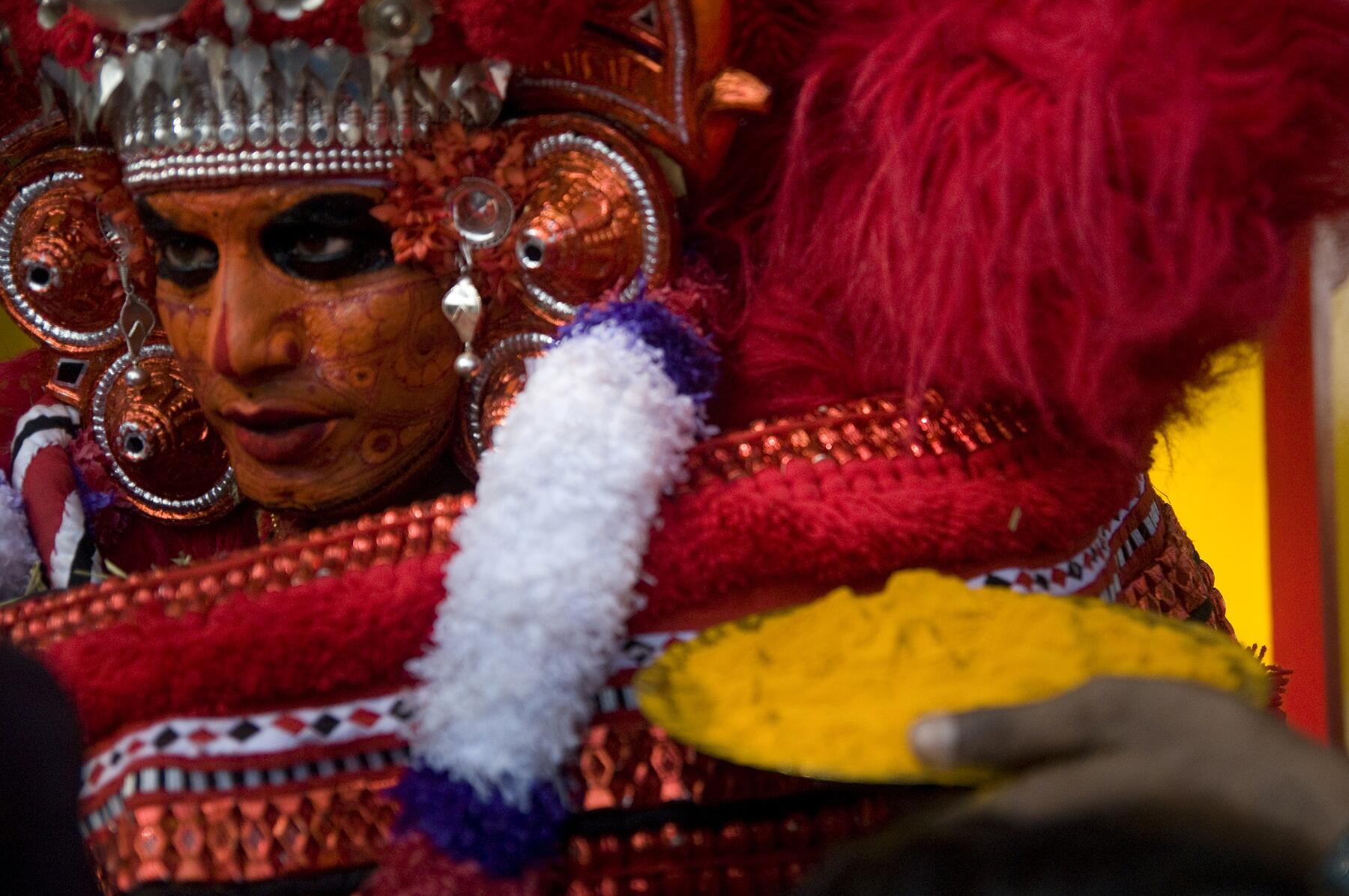 In his trance dance, the oracle varies his speed from a frantic, whirlwind motion to a subdued tumble shifting the weight of the huge costume from one foot to the other, to the tune of loud beats of the drums. In some of the performances, the eyes of the oracle remain closed with a metallic pad and afterward are nursed with cold water. A concoction of rice paste and yellow turmeric powder is a sacrament with which the incarnate deity blesses his devotees. It is considered holy and is believed to have healing powers. 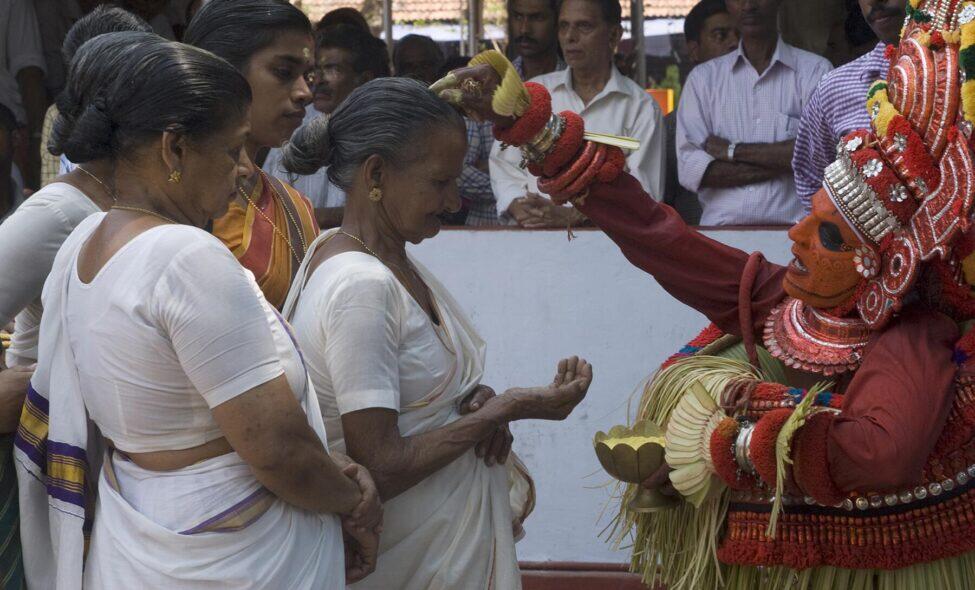 People flock over to the oracle after the trance dance, seeking blessings and remedies for their illnesses and sufferings. A typical gesture from the living god would be to smear the devotee’s head with the turmeric paste and offer some quick words of wisdom.