Seemingly all at once, I lost my best friend, my love, and discovered my pansexual identity. But it wasn't until I arrived in Goa that I found true healing.

Situated at the edge of the magnificent Western Ghats (Sahyadri Mountain range), surrounded by the calm and splendid Arabian Sea, Goa is an absolute delight. It is one of the most popular party destinations in India, with locals flocking from all over the country between October to February. With more than 50 gorgeous beaches, from North Goa to South Goa, Goa is a place where you can find both glamour and tranquillity.

As a woman, I have to evaluate places in India where I can be safe for a long period of time. Popular and highly populated locations like Goa tend to be safer in my experience. But that wasn’t all that brought me to Goa. I was desperate to be at the beach, having been madly in love with the sea. I had always hoped that I would travel to Goa with either the love of my life or my best friend. When I lost both of them at once, I knew it was time to head there on my own.

I broke up with my best friend, who I had fallen in love with after I realized I was pansexual. Having been platonically close for years, I pretended that the love I had for her was something different from ordinary romantic love. But I realized I couldn’t love her in half measure anymore. When I told her this, she heartbreakingly told me that she didn’t have the same feelings that I did. With a shattered heart, I told her that maybe it was time to let me go because I couldn’t hurt any longer. In the end, even when there was a clear-cut decision, my heart was filled with hurt and confusion. And so I decided to travel to process this ending.

In India, being queer is both illegal and a sin. Queer identities are denied existence. But in Goa, my world was ripped open when I met fellow queer people healing their hearts. On my first day, I checked into a hostel that had terrible vibes. It felt unsafe and wrong. I remember going into the room and having what felt like a nervous breakdown, thinking I made the wrong decision coming. Early in the morning, I locked up my stuff and left for the beach without knowing where I would stay next. On the beach, I met a middle-aged woman who was probably the reason I even continued with the trip. While I stood just taking in the sea, she came and stood next to me. We started talking and she asked me a few questions about my life. Then she poured her life into me.

In India, a woman’s primary identity is often reduced to who she is married to. A huge percentage of women from the generation before us are housewives, completely dependent on their husbands for financial support. Upon any husband’s death, it is culturally internalized that a woman’s life also has to come to an end.

This was a woman who had lost her husband four years ago. She told me that she took up traveling with her friends and that she visited many places. I remember the distinct moment when she looked towards the sinking sun and said, “The one who had to leave, left. How is it fair to expect that I stop living too?” Her words served as a reminder that people do leave, in one way or the other, even the love of your life. But despite all of that heartache, you still have to live to the fullest. You owe that to yourself.

I then met Naina in a hostel called House of Memories. Our dorm beds were right next to each other and for some reason, I found myself telling her of my heartbreak. Before Naina, with everyone I shared details of my broken heart, I had used the “them” pronoun to keep gender hidden, but I couldn’t hold it this time. I needed someone to know exactly who I lost. And when I confessed, afraid of what her response could be, she shared about her own pansexual identity and details about her previous relationship.

As she unraveled the difficulties she had faced with the lying, the cheating, the heartbreak, the getting back together, and the agonizing ultimate end, I realized that I could never go back to my person ever again. Because somewhere in choosing to be me, and in owning my identity, our relationship had been severed. My conversation with Naina became an indication that I had been in the wrong relationship, despite all my second-guessing. Together, we sat on a sun-bathing chair, clicking pictures of the sunset and beach dogs, blasting Taylor Swift, and talking about how we were both yet to meet our own Joe Alwyn.

I observed Shivi more than I spoke to her. She was an Indian-American yoga instructor from the States who had impulsively decided to move to India after experiencing pain and grief. In our conversation, she was happy to meet me: someone from the community. She didn’t share any personal details about her life except to talk about her healing journey, but what struck me was the way she performed yoga. It was not a workout, it was as if she was performing grief and joy through her body. When doing yoga, she didn’t care that sand filled her hair, or that the sun was blistering hot. It felt as if, once upon a time, her heart was shattered by the world, but instead of hate, she decided to love the world back with her enormous energy.

There was something magical about Goa. It felt as if people abandoned their reservations and met everyone with open love. It felt like this vast space where you could just be who you are, without performing for the world to see. I shifted to South Goa for the second half of my trip. This time there would be no people. It would just be me, living in a beach hut, with the gorgeous Palolem beach right in front of me. This time, all my conversations were to be had with my unidentified queer self. 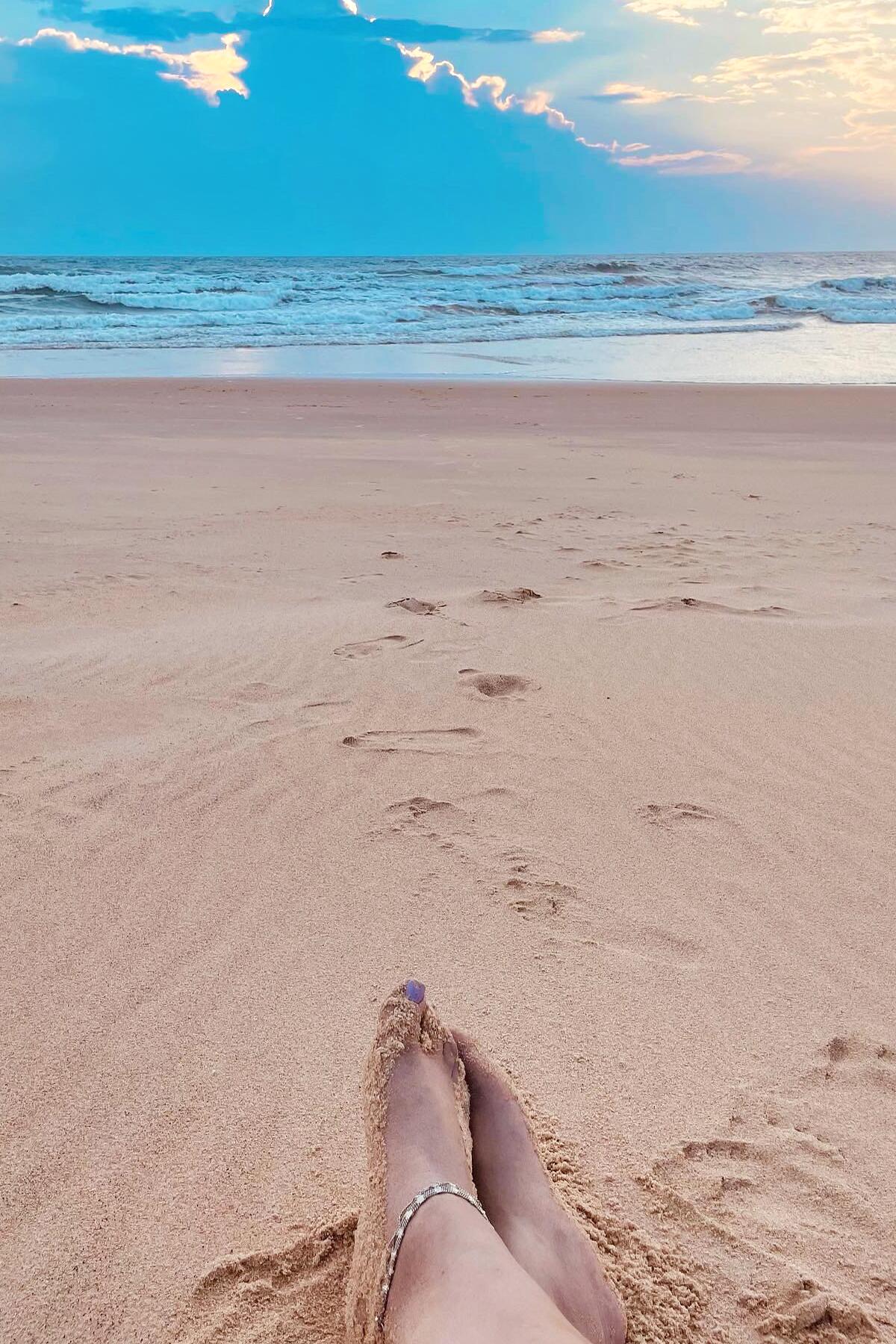 There was this moment when I was standing transfixed in front of the beach, the waves barely touching my feet. My soul felt like it wanted to weep at having had to experience the pain this heartbreak brought. And I thought, did I do this? Did I turn my best friend into a lover? Were the intimate gazes, the agony at being separated, the fading away of the world when we were together, was it not about being in love at all? Did I destroy one of my most important relationships because I was confused about my identity?

The burden of the last question was so enormous that I stopped thinking and I kept staring at the sea. Taylor’s “All Too Well” was playing and for 10 minutes I barely moved. The world around me and inside me was changing and I wanted to be as still as the water in front of me.

They say that nature heals, but I think that includes people too. Because at that moment, I saw a queer couple standing together, watching the sunset and so deeply in love. I knew the answer to all my enormous questions—if our love was good for me, she would have been here. I did everything that felt right, so being here in this moment, was the right thing too. And this heartbreak came with the gift of being able to connect to a community of my people who helped me in healing my heart.

For the queer women around the world who find themselves in confusing relationships, you deserve the same love that the sea and sand have for each other. Love that feels good and that doesn’t fall apart when you choose yourself.