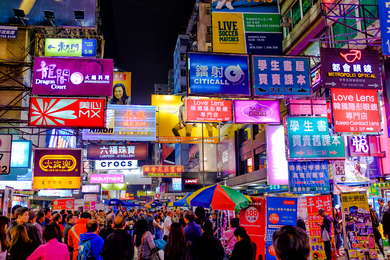 With the city’s parade of ferry pier terminals lined up along Victoria Harbour right in front of this luxe, five-star property, there’s a joke to be made about there being a quick escape from the hotel by water should the need arise, except that nobody would ever dream of leaving the Four Seasons Hotel Hong Kong by choice. Nestled on its own strip next to the water away from the streets, the hotel is nevertheless conveniently connected to Central via the International Finance Centre mall, so well-heeled guests needn’t worry about having to traverse the spaghetti junction of bridges and walkways that otherwise lead to the hotel. If you’re in town to spot celebrities, this is the place to hit up.

The hotel’s bright, airy theme is emphasized in rooms that feel plush, yet homey. 70% of rooms face the harbour and while even standard deluxe rooms are bigger than a hefty percentage of Hong Kong apartments, sizes go wild as you get to the incredible Imperial Suite.

Bathrooms are covered in bright marble with bathtubs and walk-in showers and mirrored walls add a touch of glamour.

Grand marble columns support the weight of both the triple height ceiling and all that expectation that guests bring with them on entry. Expect to find a flurry of people coming and going throughout the day for meetings, luncheons and all the other things that the super-wealthy get up to in hotel lobbies. Soaring glass walls let in floods of natural light.

The Four Seasons is a see and be seen type of place so expect to find a clientele who look as money as the rooms themselves.

Overlooked by the Pool Terrace which serves light meals and drinks, the outdoor pool and its surrounding loungers create such a serene space it will have you convinced that you’ve left the city behind.

YOU SHOULD KNOW Keen to promote sustainability, the spa only uses organic products with eco credentials.

The excellent hotel gym employs a team of personal trainers that guests can call on to improve their workout.

We have it on good authority that Jack Ma loves The Lounge, a stylish space off of the main lobby frequented by a hip, celebrity crowd who come for afternoon tea, brunch, and cocktails. If a see-and-be-seen style isn’t your thing, retire to the Blue Bar and quaff signature martinis.

The hotel’s spot on the edge of the island beside the harbor means first-rate connections to the various ferry piers that can take you to the likes of Macau. While the hotel is close to Central, the walk is mostly via covered walkways and the IFC mall, so for ease, a taxi can sometimes be the best choice for short trips.

With so many Michelin-starred restaurants in the hotel, it’s good to break out and sample an essence of true Hong Kong dinging. A little way up the harbor, City Hall Maxim’s Palace (12-minute walk) is the place to find traditional dim sum in the elegant setting of the old city hall. Alternative, combine traditional with Michelin-starred dining at the legendary Tim Ho Wan (9-minute walk).

Drink creative cocktail concoctions at VEA (4-minute drive) or travel a little further to have your mind blown by the whisky behind the bar at Mizunara: The Library (6-minute drive).

Serving luxury almost without fault, the Four Seasons Hotel Hong Kong is quite possibly the finest hotel in Hong Kong on any given day. The sheer array of Michelin-starred status among its restaurants is as impressive as anything and its commitment to service is famous.