As an open-air ferry chugs through the Tolo Channel and across Mirs Bay in the northeastern corner of Hong Kong, the skyline fades out of sight. Here, jade-green waters stretch as far as the eye can see, while a thick morning mist shrouds craggy mountain peaks. The views on the 1.5-hour journey to Tung Ping Chau—the easternmost and farthest-flung island in Hong Kong—augur well for what’s to come.

Located roughly 20 miles northeast of the city, the dolphin-shaped island is closer to mainland China than it is Hong Kong. While there are plenty of islands that are far easier to reach—Cheung Chau, Lamma, and Lantau, just to name a few—Tung Ping Chau has an almost fabled reputation as a tropical wonderland, luring travelers through the eastern waters to see for themselves.

Here, jade-green waters stretch as far as the eye can see, while a thick morning mist shrouds craggy mountain peaks.

Indeed, a visit to the 1.1-square-kilometer island rewards day-trippers with clear water, remote hiking trails, and radical geological wonders formed over millions of years. And, yes, it’s definitely worth the extra legwork. Here are just a few things that make Tung Ping Chau so unique.

While we can’t promise a totally seamless experience, the trip to Tung Ping Chau is certainly memorable. For starters, there are just two ferries a day (departing at 9 am and returning at 5:15 pm on weekends and public holidays) so you can’t afford to miss your ride.

In the morning, make your way to Ma Liu Shui pier in the northeastern New Territories—about a 25-minute drive from Central—then claim your spot in line. One by one, guests pay HK$90 in cash for a round-trip ticket, then hop on board an industrial, two-story vessel. From the blue plastic chairs to the cramped toilet, it’s definitely a no-frills experience but the sea views more than make up for the lack of creature comforts.

Part of the Hong Kong UNESCO Global Geopark, Tung Ping Chau is said to date to the Paleogene period (roughly 55 million years ago). Geologists believe that the island was formed by sedimentary rock, sand, and mud that settled into an ancient lagoon.

Some rocks also feature iron and calcium composites that create kaleidoscopic shades of green, purple, and yellow. One of the most famous rock formations is called Kang Lau Shek—a pair of 25-foot-tall “Watchtower” sea stacks, which seem to protect the island’s southeastern tip. On the opposite side of the island, you’ll discover Lung Lok Shui. This long and lean quartz strata is said to resemble a dragon diving into the sea.

INSIDER TIPDuring summer months, in particular, it’s important to reach the ferry pier early since it’s on a first-come, first-serve basis. Bring exact change or an Octopus card (Hong Kong’s tap-and-go transit card), as the ferry operators do not offer change nor do they accept credit cards 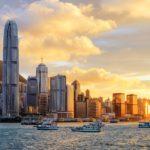 RELATED STORY
Top 20 Free Things To Do In Hong Kong

Circling the entire island, the three-hour Country Trail is the best way to get your bearings. From the Tung Ping Chau ferry pier, on the eastern side of the island, turn left and follow a cement walkway to the southeast. It will take you past a beautiful ancestral graveyard, through an abandoned hamlet, and past a temple, spitting you out on a pebbly beach.

Follow the coastline to discover wild and wonderful formations; take not of the dramatic thousand-layer sea stacks and angled wave-cut stones, which resemble enormous fish scales. During low tide, you can walk along the rocks and even stretch out in the sun for a snooze. But come high tide, the area fills with water, becoming a veritable playground for sea creatures and fish.

From there, trace the island’s western edge, heading uphill into the lush mountains where vine-laden banyan trees and dangling vines create scenes straight out of Tomb Raider. All the while, the buzz of cicadas pierce the silence. The trail curves around the northern end of the island, looping back to the ferry pier by way of a soft, silver-sand beach.

INSIDER TIPBring sunblock and mosquito repellant. The hike can be buggy and there’s little shade near the beaches.

On the northwestern edge of the island, the Cham Keng Chau canyon is fun to explore at low tide. But first, you have to reach it. Scramble down a series of step-like rocks onto a pebbly beach where rocky shale beds disappear into the sea. Turn right and there it is: A deep, wide cleft between two jungled cliffs, thought to have been cut by waves over millions of years. Through the breezy corridor, you’ll stumble onto a cliff-hugged shoreline that’s particularly popular for fishing.

While the natural beauty of Tung Ping Chau is immediately evident, the island has also has an eerie atmosphere. In the early 20th century, the island played host to a vibrant community with somewhere between 1,500 and 3,000 residents at its peak.

Many villagers were fishermen who capitalized on the island’s healthy populations of abalone, fish, and sea urchin. But without modern amenities such as potable water or electricity, residents eventually relocated to more developed parts of Hong Kong. Today, hundreds of empty stone houses sit in clusters across the island, only to be devoured by territorial vines and roots.

INSIDER TIPBe sure to turn off your phone’s roaming function while on the island. Though there’s hardly any service, you could accidentally join a Chinese telephone network and face steep bills.

On the eastern side of the island, the landscape changes from rocky shores to soft, powdery sand. Dubbed Cheung Sha Wan beach, this long stretch is the best place to sunbathe, snorkel, or even scuba dive. There are said to be more than 80 species of coral, as well as more than 130 types of reef fish.

A few local companies, including Tung Ping Chau Divers’ Paradise, provide guided tours to daytrippers if you pre-book, or you can bring your own gear. Don’t expect Philippines visibility, but the island is part of a protected marine park so the water is relatively clean, clear, and full of fish. There’s also a surprising abundance of crabs, sea anemones, nudibranch, and clownfish in the waters around the island.

Though the island is mostly deserted during the week, a handful of former residents return to run restaurants and snack stalls for travelers on weekends. These open-air, family-run cafes, known as dai pai dongs in Cantonese, serve up casual dishes such as noodles, stir-fries, and seafood.

For great food and friendly service, head to Sunshine Store in Tai Tong village on the eastern coast. This spacious cafe is marked by vibrant neon signage, rainbow-painted bricks, and smiley face murals all around. Try a signature grass jelly drink, fried chicken wings, and salt and pepper shrimp, but, disclaimer, the portions are enormous.

To the southeast of the ferry pier, in Sha Tau village, Li Li is another solid option. This spot is smaller with just 10-12 seats, but the menu is ambitious. The signatures? Uni fried rice and homemade pudding. 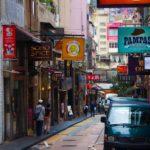 There are two temples on the island. The larger of the two, Tin Hau Temple, can be found just past Sha Tau village, perched on a platform overlooking the water. Dedicated to the goddess of the sea, the Qing Dynasty-style temple was built in the late 1700s and remains remarkably intact. The graceful one-story structure features a vibrant reddish orange facade, green-tiled roof, and a peaceful internal courtyard that provides much-needed ventilation in humid Hong Kong.

Meanwhile, smaller Tam Tai Sin temple can be found just off the main trail behind A Ma Wan beach. Built more than 100 years ago, the compact white temple is relatively simple with just two small halls and a decorative altar dedicated to an important sea deity.

While hiking around the island, you might be surprised by the varied plant life. Bamboo groves and banyan trees are to be expected, sure. But cactus? There are two types of cacti on Tung Ping Chau—one has long, thin stems and dramatic, drooping white flowers that bloom at night. The other sports thick, thorny arms with vibrant yellow blooms. Around the island, there are also countless species of butterflies fluttering overhead, including dramatic Swallowtails that swoop elegantly through the air, showing off their wide wings and colorful patterns. 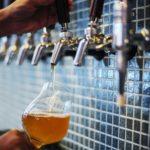 The island has a basic camping site on the southern tip, near the famed Kang Lau Shek rock platforms. Formerly a sugar mill, the site is now home to barbecue pits, picnic tables, and lots of shade. Campers are welcome to pitch a tent for the night, but it’s advised to first seek permission from Hong Kong’s Agriculture, Fisheries and Conservation Department, since the island is part of a protected park. Conveniently, this easterly outpost also happens to be the best spot for an epic sunrise. 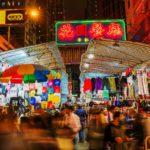