A melting pot of cultures and cuisines born of the 17th-century spice trade, Cape Town flaunts a long and flavorful culinary history—and you’ll find plenty of tasty evidence to prove it.

Top that off with the fact that Capetonian chefs are making a global name for themselves (Luke Dale-Roberts’ warehouse-chic The Test Kitchen in the Woodstock neighborhood was just named Africa’s best restaurant) and you’ve got a skyrocketing eating scene. What’s more fun than checking out restaurants both high-end and hole-in-the-wall, as well as contemporary and traditional; gourmet food trucks; food markets; and a curious regional diet called Banting? Cape Town offers all this and more. Get your forks ready and let’s go!

Shoot for the Stars

For starters, Cape Town has Luke Dale-Roberts, innovative chef extraordinaire of The Test Kitchen, acclaimed for its creative dishes made from local provenance. Not only is this amazing eatery Africa’s top restaurant, it’s rated 22nd in the world (not to mention, it’s been named South Africa’s top restaurant every year since 2012). Chef Dale-Roberts has gone on to open the trendy Pot Luck Club (another top-ranking resto in the nation) in Woodstock’s Old Biscuit Mill, offering friendly tapas meals; and the new Shortmarket Club in the Central Business District, which serves contemporary twists on regional classics—the local kingklip fish, for example, served with Bo-Kaap roasted masala sauce, burnt gem lettuce, spekboom, and quinoa salsa; or lamb rump with roasted fennel fondant, ricotta, pine nut, and fennel seed roasted leeks, and lamb jus with mint jelly.

Bites Jeremy Tarr This Might Be the Best Airport Meal in America. But Is It Worth $995?
Continue Reading Article After Our Video

But what makes the Cape Town culinary scene even more special is its magnitude—eight of South Africa’s top ten restaurants reside here, after all. You’ve got La Colombe, melding local ingredients with French élan; The Greenhouse, proclaimed for its playful South African cuisine served overlooking verdant gardens at the Cellars-Hohenort Hotel in Constantia; the Restaurant at Waterkloof in Somerset West, masters in French cuisine in a vineyard setting; and the list goes on.

And even then, please don’t confine yourself to the official list, for Cape Town chefs sprinkle their magical salt everywhere. All you need to do is pull up a seat at any table of interest and indulge.

The typical Capetonian Saturday ritual comprises a hike (most likely up Table Mountain, but there are plenty of other nearby choices) then some good perusing at one of its many open-air markets, perhaps stocking up for a lunchtime picnic or dinner feast. Among local favorites is the Neighbourgoods Market at Woodstock’s Old Biscuit Mill, a festive collection of restaurants, cafés, and stalls where farmers offer tastings and purvey their organic goods; you’ll find anything from Thai dumplings to dozens of types of mushrooms to three different shawarma stalls to springbok sandwiches. Market at the Palms, also in Woodstock, is the place to sample recipes handed down through generations of South African families: mince pies, noble jaffels, brownies; though word is out that the vendors are becoming more experimental—along the lines of coq au vin pie, angelfish pâté, and salmon-stuffed breakfast mushrooms. But nearly every neighborhood has its own market with its own flair; half the fun is exploring and stumbling upon your own treasure of edible goods. 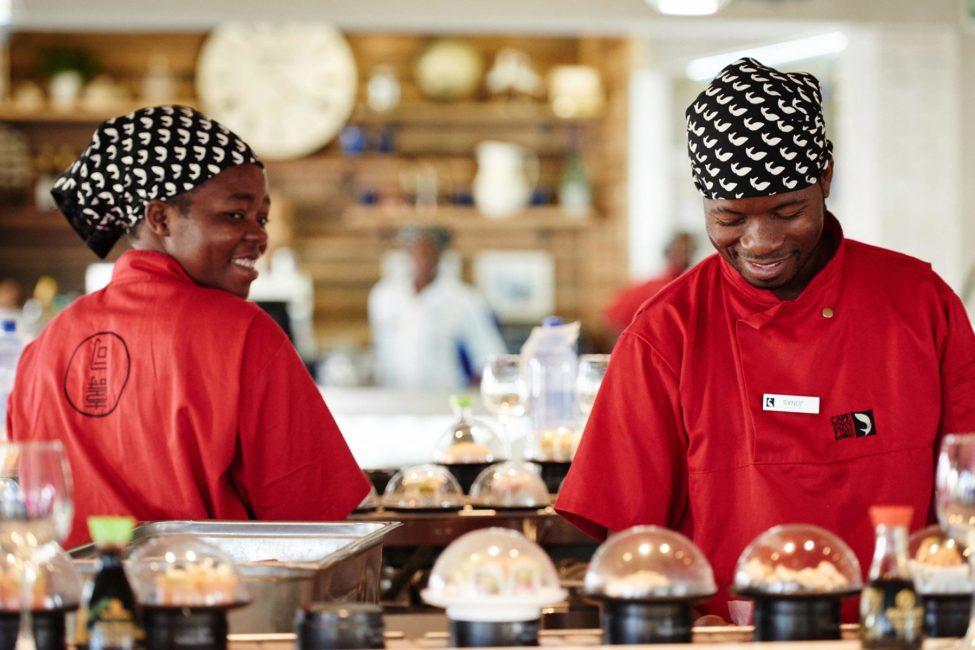 With all of the experimentation and innovation going on in Cape Town’s kitchens, sometimes it’s nice to simply sit back and enjoy a straightforward authentic African meal. And here you’re offered a pan-African array of choices. One of the best (even though a tad touristy) is Mama Africa in the Central Business District, with traditional dishes covering the continent, from Moroccan lamb pot roast to Mozambique chicken livers to ostrich steak to Zimbabwean dovi, all served with a side of samp and pap (mealie meal porridge). The lively Marimba band will regale you as you dine. For pure Ethiopian in a rich, warm setting, locals head to Addis in Cape. And Africa Café is another popular choice, with everything from Xhosa spinach patties to Mozambican peri-peri prawns to Ethiopian lamb on the menu. 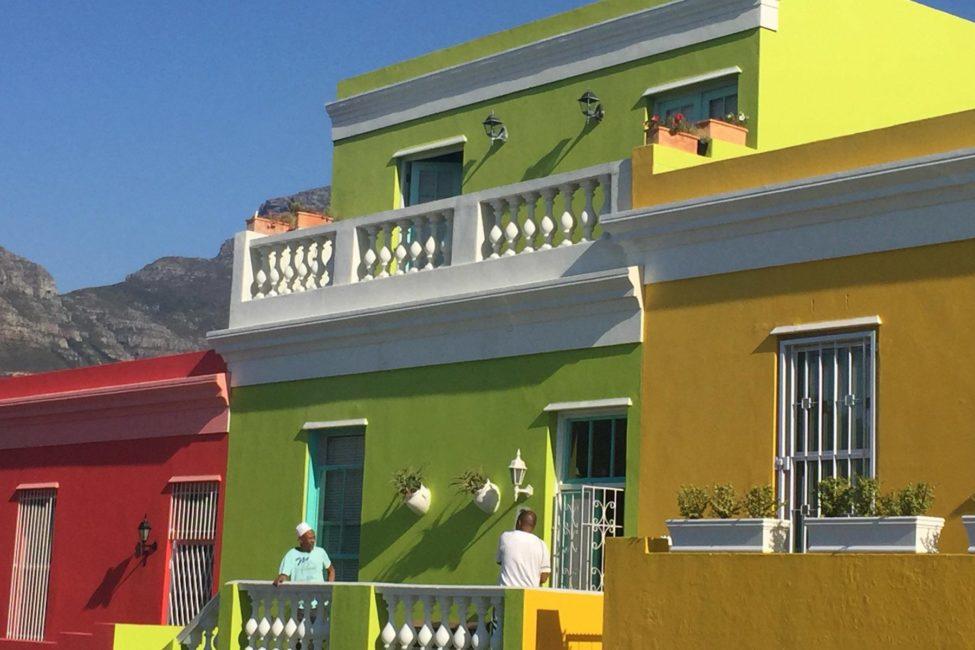 For something truly Capetonian authentic, you’ve got to try the spicy culinary fare of the Cape Malay. This medley of cultures, which originated in Cape Town’s predominantly Muslim Bo-Kaap quarter, dates back to Dutch colonial rule and the spices and culinary expertise of their Indonesian slaves. Specialties include bobotie: spicy, curried mincemeat in a rich egg custard, said to be the country’s national dish; and breyani: curry-infused rice and meat dishes with lentils and masala. Savor some of the best Cape Malay fare at Biesmiellah, run by two generations of the Osman family; or friendly Bo-Kaap Kombuis, with its fabulous views over the city, both in the Bo-Kaap neighborhood.

INSIDER TIPGo to the source at the family-run Atlas Trading Company, a remnant of the spice trade, where the piquant aroma of cinnamon, cardamom, and cumin tantalizes the senses. 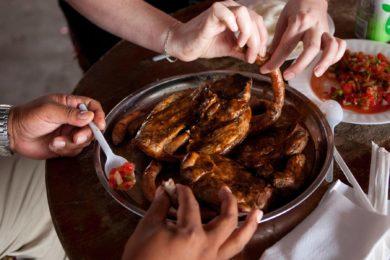 Braii With the Locals

You can’t say you’ve been to South Africa without experiencing braai. And in Cape Town, there’s no better place to sample this local take on barbecue than open-air, über-hip Mzoli’s Place. Located in the township of Gugulethu, about 10 miles from the city center, this is the real deal, famed for its dance parties, diverse patronage, and signature meat (it originated as a butchery). Pick your lamb shank, chicken pieces, or beef steaks at the counter, bring them to the braaimeister to cook over charcoal fires, and wait at the tables outside … your tastebuds will be tingling by the time the server places your barbecued plate in front of you. It may seem a bit busy and unorganized at times, and it’s certainly not five-star dining (in fact, it’s BYOB—and paper plates, napkins, and utensils). But that’s the crux of its charm.

William Banting was an 18th-century English undertaker who came up with a low-carb, high-fat diet (LCHF) and lost a bunch of weight. Fast forward a few centuries, and Professor Tim Noakes glommed onto the idea and wrote a book, The Real Meal Revolution, that has taken Cape Town by storm. Serious storm. Some of our favorite Banting-friendly restaurants include Arugula Bistro and Bread, serving up the likes of slow-roasted pork belly (for which they’re famous) with cauliflower purée, baby marrow ribbons, and garlic butter; DaVinci’s, where any burger can be in a bowl with rocket, avo, lettuce, sprouts and seeds instead of a bun; and Balducci on the V&A Waterfront, which even has a Banting pizza with a crust made from cauliflower and cheddar cheese.

These days, you don’t need four walls or even tables and chairs to serve up exciting and innovative cuisine. Cape Town is taking the American trend to task, offering some of the most amazing, locally-sourced meals around from its trailers, carts, and vintage vans. Limoncello is the 70s-style motorhome spearheading the craze, run by Naples-born chef Luca Castiglione. You’ll enjoy such seasonal southern Italian dishes as artichoke risotto, yellow-fin-tuna panini, as well as pizzas and calzones. Cafeteria Guerilla Gastronomica serves up gourmet seasonal comfort food: toasted banana bread with vanilla-yogurt cream; slow-roast leg of lamb; and Thai curries; along with homemade lemonade and old-fashioned ginger beer. And 4roomed Ekasia Culture, owned by Abigail Mbalo, a top-12 MasterChef SA 2014 contestant, offers a healthier, gourmet take on familiar township dishes; pap, for example, is not the maize-based porridge but comes in a trio of flavors (butternut and nutmeg; spinach and cream; and beetroot pulp, roasted garlic, and feta cheese). You get the picture. You’ll find food trucks generally at weekly markets and festivals. For more information—and to find the up-to-the-minute locations of the trucks—visit capetownfoodtrucks.co.za, follow the locations on Twitter @ctfoodtrucks, or like the Facebook page, Cape Town Food Trucks.

Insider Tip: The most romantic food truck spot is at Oudekraal, a viewing point between Camps Bay and Hout Bay with vistas of the sparkling Atlantic on one side and the dreamy Twelve Apostles mountains on the other. Trucks park here Wednesdays and Saturdays.

If Cape Town weren’t beautiful enough, within an hour’s drive awaits the Cape Winelands, Africa’s answer to Tuscany and Napa. Fairy-tale beautiful, this dreamy realm harbors craggy mountain peaks, impossibly emerald valleys, thriving roses and hydrangeas everywhere you look, and historic wine estates sprinkled throughout. And with the wine comes chefs inspired to create innovate dishes from the region’s super fresh produce, springing forth some of the planet’s most highly praised restaurants. It’s hard to know where to begin, but hands-down the crème de la crème is the award-winning Tasting Room at Le Quarter Français, where chef Margot Janse (Africa’s only female Grand Chef) creates unique modern African cuisine to match the region’s fine wines–indulge in the eight-course surprise menu. 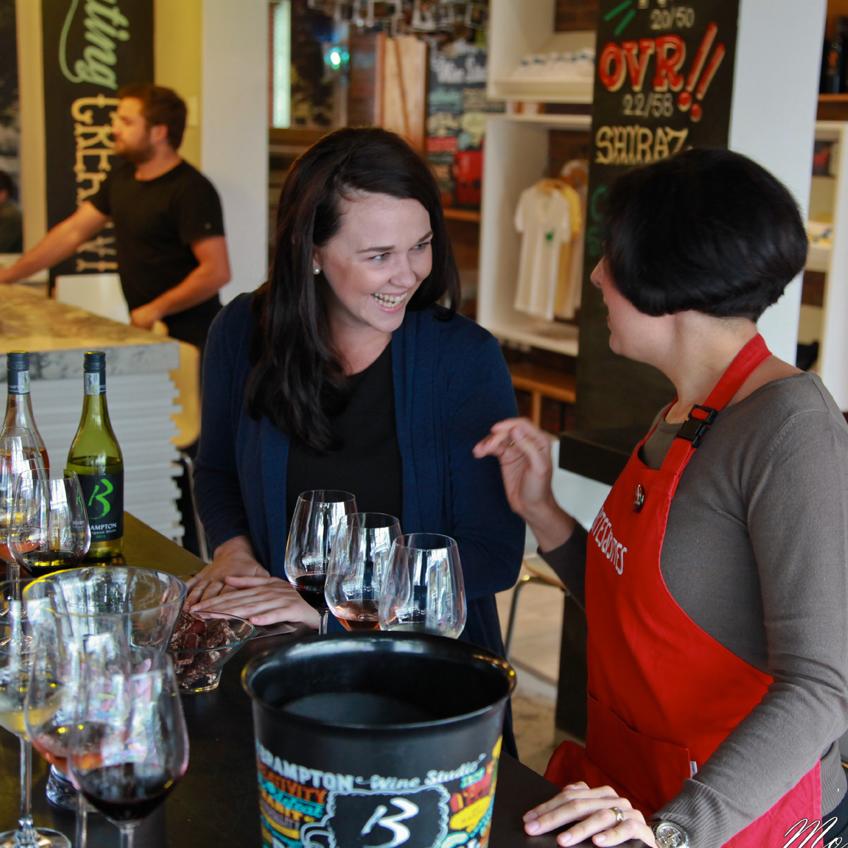 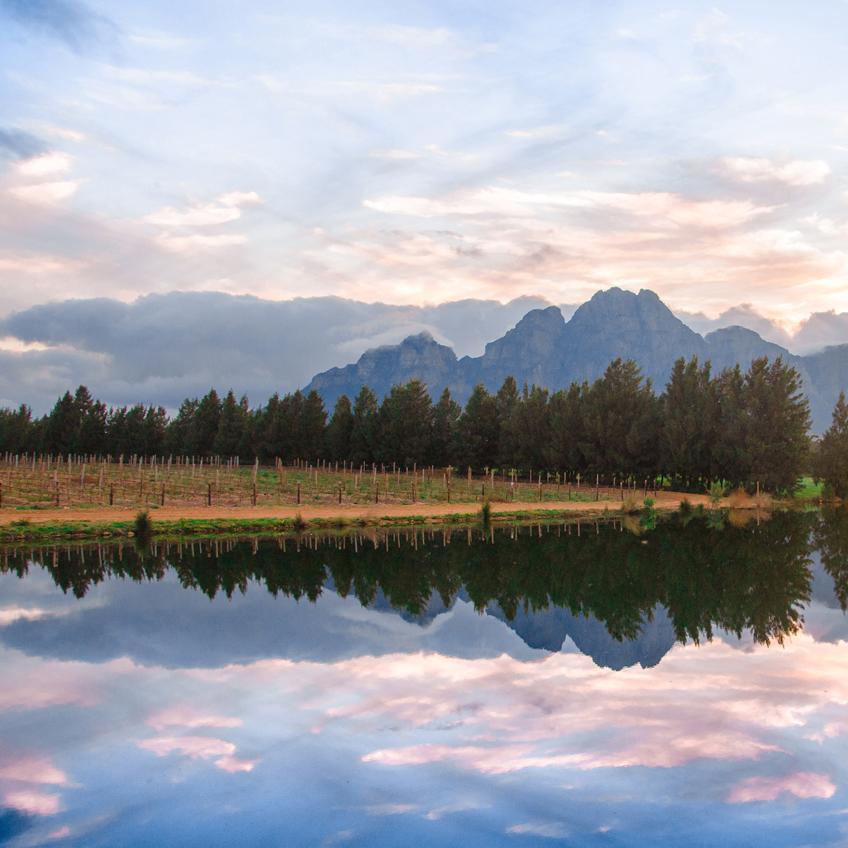 Or head to Helshoogte Pass, where five-star Tokara sits among its own vineyards and olive farm. If you time it right, you’ll enjoy a sundowner as the red-hot sun dips behind rumpled, vineyard-striped hills, followed by an exquisite meal. Executive Chef Richard Carstens is known for his innovative seasonal menu—prepare yourself for the likes of peppered springbok with sweet potato purée, shitake, spinach, buckwheat, parmesan, and porcini jus followed by Tokara olive oil cake and custard with gruyère ice cream, meringue, white balsamic gel, and pine nuts. See what we mean?

INSIDER TIPGet an intimate take on the local foodie scene. Hanli Fourie of Bites and Sites Food Tours runs a Foodie on Foot tour of Stellenbosch, introducing you to local food artisans to hear their stories as you duck into various eateries and sample handcrafted seasonal dishes and regional wines along the way.

This article was originally published January 10, 2017.