Cape Town is a visually stunning city, with the Table Mountain towering over the center and powdery beaches stretching into the distance. Between the mountain and the sea is a sophisticated city with world-class restaurants, nearby vineyards, funky neighborhood enclaves, and the proud Xhosa townships.

Nearly all visitors to South Africa, whether they come for the safaris, wine country, culture, or beaches, will have a short brush with “the Mother City.” Here’s your primer on making the most of a brief visit, with personally vetted picks for the perfect way to stay and play with just 48 hours in Cape Town.

After the long journey, treat yourself to a stay at the 329-room Table Bay Hotel (rates from $399/night). Perched on the vibrant V&A (Victoria & Alfred) Waterfront, with views looking out onto the ocean, harbor, and/or the city’s iconic Table Mountain, this polished neo-Victorian hotel was opened back in 1997 by then-President Nelson Mandela. Fuel up for a jam-packed day at The Atlantic here, serving an extensive buffet spread (240-plus items!) with a juice bar, and outdoor harborfront seating.

Set out to uncover some of South Africa’s unique and multicultural history with a tour of Langa township, home to a local Xhosa tribal community. Sign up with Vamos‘s half-day, small-group outings for an insightful tour, where native Xhosa guides navigate the ins and outs of township life, with stops at a cultural center, church, residence, and a “shebeen,” a men’s-only bar of sorts, where townswomen dole out local brews. The tour company offers convenient door-to-door service, so circle back around to be dropped off at the Table Bay/waterfront area ahead of your afternoon outing.

Given the time limit and Cape Town’s public transportation options, we recommend a city-circuit hop-on/hop-off bus. The double-decker buses run by City Sightseeing are a solid bet. They run every 20 minutes from V&A Waterfront to the city’s premier attraction: Table Mountain.

Reach the summit of the flat-topped mountain Table Mountain by cableway and take in the sweeping panoramas over Cape Town and its mountains-meets-ocean landscape. The protected wilderness here is perfect for hiking.

Down below, hop back on the red bus to finish the loop to the V&A Waterfront—en route you’ll pass some of the city’s scenic beachfront communities, like Camps Bay and Clifton. Back where you started, take a short stroll around the buzzing waterfront, with dozens of restaurants, bars, and shops (try The Watershed for wares from local artists and designers), and attractions like the well-presented Two Oceans Aquarium. The most tempting diversion here is perhaps the sunset catamaran cruise with Waterfront Charters: a scenic 1½-hour sail into the harbor, with complimentary drinks and a good chance of spotting seals and dolphins.

Back on shore, hop in a cab to the revitalized, semi-industrial Woodstock , where the Old Biscuit Mill shopping-and-dining complex is housed in a brilliantly reimagined factory. You’ll need to reserve several months in advance to secure a spot at one of the hottest tables in town, The Pot Luck Club. It’s perched atop a converted grain silo with expansive city views and features internationally inspired, shareable small plates (fish tacos, beef fillet in a café au lait truffle sauce), handcrafted cocktails, and South African wines.

On day two head out to the 30-mile-long Cape Peninsula. This rocky peninsula—much of which falls within the protected parkland of Table Mountain National Park—juts out just south of the city center, near the meeting point of the Atlantic and Indian Oceans, at the southernmost reaches of the African continent. Here you’ll have to choose between charming coastal towns, white-sand beaches, mountain trails, and attractions as varied as wine-tasting and penguin-spotting.

You’ll want to rent a car or hire a driver and guide, like PG Tops Travel & Tours, to get around. Grab a map and head toward the colorful beachfront town and surfer haven of Muizenberg. Kick off your day by fueling up with coffee  and fresh-baked pastries at the Olympia Café, in the charming fishing harbor of Kalk Bay, brimming with galleries, bistros, and antique shops.

Continue down the coast to the Victorian-era Simon’s Town, an old navy base whose star attraction is Boulders Beach, also part of Table Mountain National Park. Home to an entertaining resident colony of African penguins, you can watch the well-dressed, waddling birds from viewing platforms set up along a protected stretch of breeding-friendly beach.

Follow the peninsula down to its southernmost point (and the southwestern-most point of the African continent) to the 19,000-acre Cape of Good Hope nature reserve, another section of the national park, set on a rocky cape covered with rolling hills, isolated beaches, and if you look closely (and have some luck), wildlife like baboons, ostriches, zebras, and antelope. Stop for lunch at the stunningly situated Two Oceans Restaurant at Cape Point. It can be maddeningly crowded (reservations recommended), but the seafood-centric dishes are solid and the views overlooking the ocean are superb.

Burn off those calories further exploring Cape Point, where you can walk uphill to the old 1860 lighthouse (there’s a funicular if you’d rather ride). Don’t miss the short 45-minute trail that winds along an Atlantic Ocean-piercing ridge down to the water’s edge.

Follow the coast back north to one of its most scenic stretches, the breathtaking Chapman’s Peak Drive, a clifftop coastal highway that connects the towns of Noordhoek and Hout Bay. In Hout Bay, take a quick spin by the busy harbor, where working fishing and tourism boats zip in and out, and fish-and-chips-famed eateries beckon.

Time (and energy levels) permitting, consider a slight diversion to sample some of South Africa’s famous wines, by dipping in for wine tasting at one of the old estates in the historic Constantia valley. Noted for their 17th-century Cape Dutch homesteads, towering oaks, and sprawling vineyards, we’re keen on Groot Constantia, South Africa’s oldest wine estate, or the atmospheric Klein Constantia. 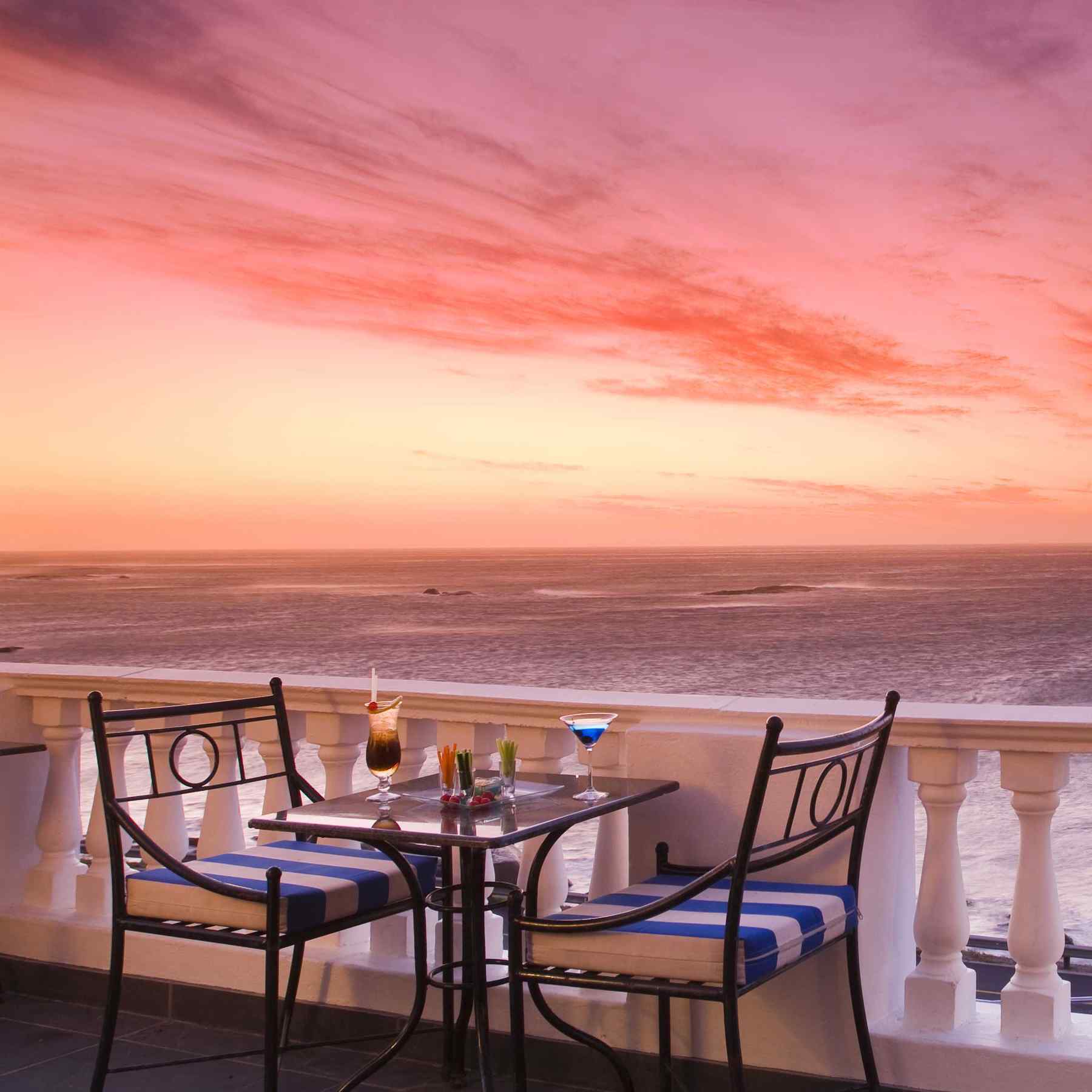 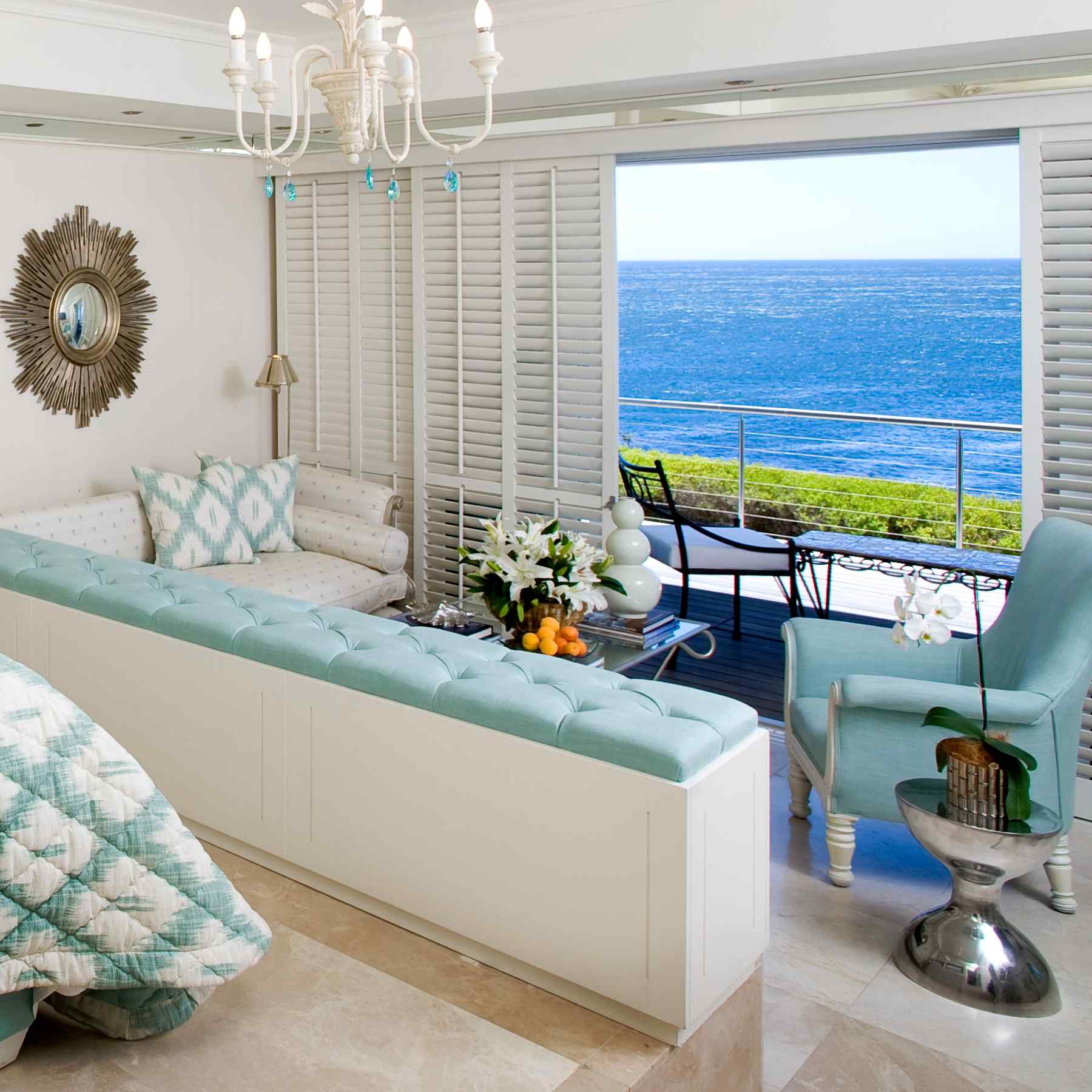 For your last evening in Cape Town, stay at the swanky Twelve Apostles Hotel and Spa (rates from $349/night), in Camps Bay. Wedged between the eponymous Twelve Apostles mountain range and the Atlantic Ocean, the posh 70-room retreat maximizes its natural setting with plenty of floor-to-ceiling windows, guestrooms that open onto patios and balconies, and dining-and-wining venues that boast ample outdoor seating. The pleasantly landscaped grounds include two pools, an herb garden (pickings for the restaurant chef), and a standout grotto-style spa that offers treatment areas in two open-air gazebos.

Try to make it for “sundowners” on the ocean-facing balcony of the hotel’s famed Leopard Bar, where the sunset dipping below the Atlantic is daily spectacle. Cap off the day at the hotel’s classy, nautically themed Azure restaurant, pairing stunning sea views with a solid menu of international and South African cuisine, including a tempting trio of prix-fixe tasting menus (anchored on meat, seafood, and vegetarian themes). Situated just 20 minutes outside of the bustling city center, a stay at Twelve Apostles is a fitting grand finale for a whirlwind tour.

This article was originally published May 13, 2016.