Israel is a colorful country: its rich history and melting pot of cultures from North Africa, the Middle East, the Mediterranean, Eastern Europe, and Russia makes the country seem more like an outdoor classroom for curious travelers. The geopolitics of the region are impossible to overlook and fuel the passion of the people and the land. But with its outstanding architecture, excellent cuisine, and ancient religious sites, Israel offers something for everyone. 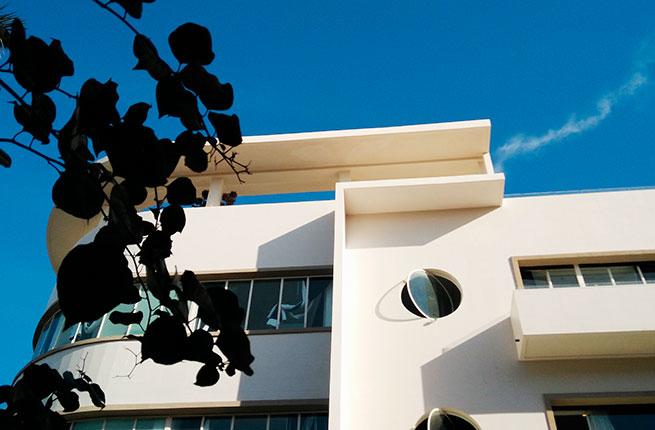 Just when it seemed Israel’s luxury hotel scene was saturated, the choices got even more interesting. Particularly in Tel Aviv, known as the “White City” for its concentration of early 20th century Bauhaus buildings which earned the city UNESCO World Heritage status, travelers are flocking to a handful of new hotels that combine historic architecture with contemporary design and amenities. The 50-room Norman, housed in two striking Bauhaus buildings, opened in December 2014, while the Brown Beach House, just steps from Trumpeldor beach, ushered in the prestigious Design Hotels brand in Israel last year. Meanwhile, Poli House has undergone a three-year transformation by Karim Rashid, designer of Athens’ Semiramis Hotel and Berlin’s Nhow Hotel and debuts in October in a Bauhaus gem, replete with rooftop pool and bar. 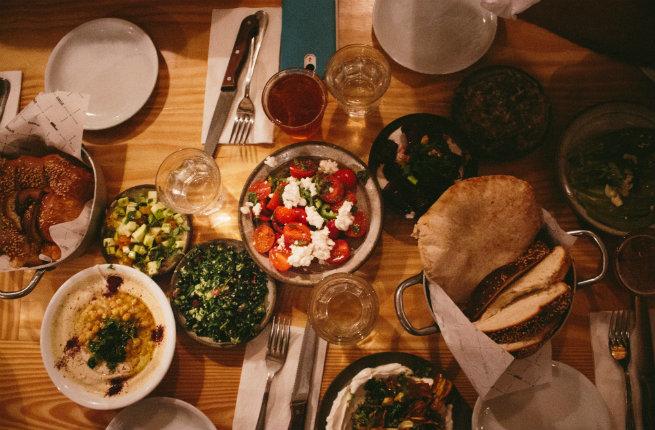 The best restaurants in Israel use fresh, seasonal ingredients to keep locals and in-the-know tourists coming back. Tel Aviv hotspot Ha’achim (Rehov Iben Gabirol 12) is beloved for its zesty meat skewers and wide array of mezze; the hummus at Ha’achim will send your taste buds into spasms of heavenly bliss. Across town at Yom Tov Delicatessen (Levinsky 43, Shuk Lewinsky, 03-681-3730) in the gourmet paradise of Levinsky Market, foodies will revel in hand-stuffed olives, unique cheeses, and spicy vegetable salads made from recipes created by the proprietor Yomi’s grandfather who immigrated from Turkey in the 1960s. And up the Mediterranean coast in Acre, retired fisherman Uri Jeremias prepares quite possibly the tastiest fish in Israel at Uri Buri Fish Restaurant (Ha-Hagana St., Acre; 972-4/955-2212, ) with changing menu items like calamari with kumquats and grapefruit, persimmon and mascarpone with fish eggs, and Coquilles St. Jacques in white wine sauce with ginger and garlic.

Tel Aviv boasts an ever-evolving assortment of nighttime lairs.  For those who want to hear live bands or DJs any night of the week, a visit to Kuli Alma  in south Tel Aviv is in order. A less boisterous crowd can be found sipping cocktails at one of many hangouts near Tel Aviv’s chic King George Street, including the achingly cool Port Said (Har Sinai 5,) or the relaxed Rothschild 12 . In Jerusalem, the places to be are the Gatsby Cocktail Room (Hillel 18) or Mirror Bar  at The Mamilla Hotel. With its cigar bar, craft cocktail menu, and in-house DJ, this sophisticated spot is a magnet for upscale locals and tourists alike. 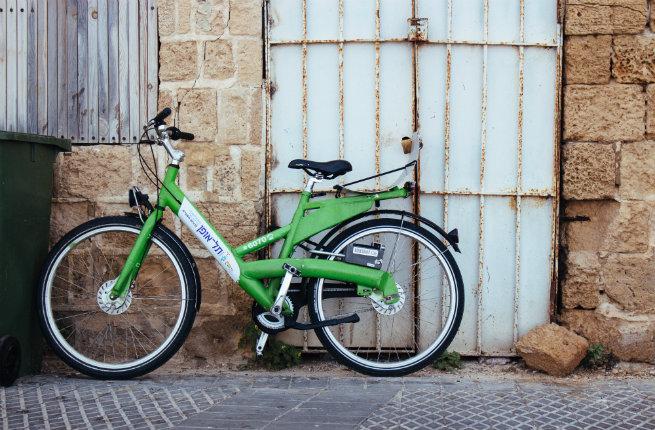 Bike share program Tel-O-Fun Bikes  provides a fun, eco-friendly way to explore the city while reducing traffic for local commuters. Approximately 75 miles of accessible bike paths have been added throughout Tel Aviv in recent years particularly along the beach, where part of the path is on the street but with a designated lane and its own set of traffic lights. The bikes themselves are sturdy and stylish in a vibrant Kelly green hue. Daily access cards can be purchased on the Tel-O-Fun website or with a credit card at any one of the 150 terminals across town.  For those who prefer four wheels to two, the new-to-Israel Gett taxi  and Rider apps  are the best way to get a cab quickly. 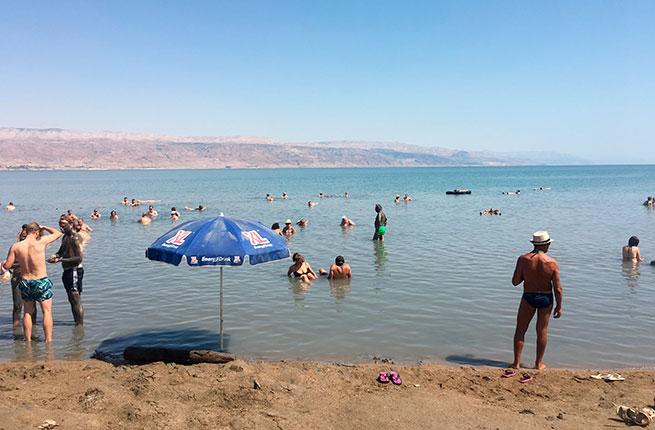 Environmentalists warn that the Dead Sea is receding at a rate of about three feet per year due to the lack of water coming into it from the Jordan River. Visit Neve Midbar Beach  in the northern region of Megilot while the sea is still there. Neve Midbar is one of the least commercialized stretches along the Israeli shore and has outdoor showers, changing rooms, lifeguards, a bar, and a grassy picnic area. Frequented by both locals and tourists, it’s the perfect place to feel the instant buoyancy of this hypersalinated lake which is almost nine times saltier than the ocean. While there, slather on some of the sea’s mineral-filled brown mud believed to alleviate the symptoms of psoriasis and rheumatoid arthritis. 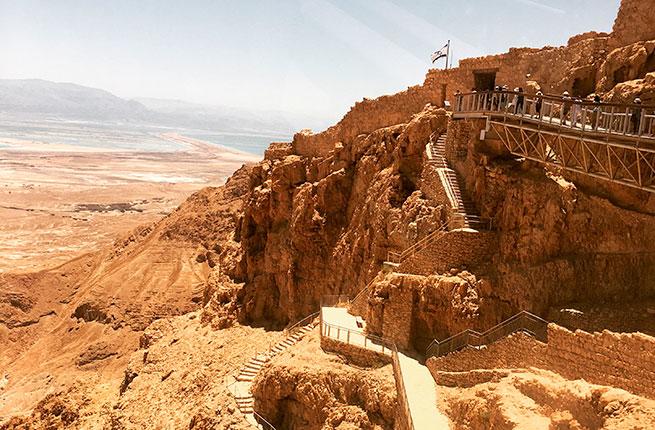 Seen as the Biblical Holy Land for Jews, Christians, and Muslims, Israel is crammed with historical and religious sites from Tel Aviv to Jerusalem. In Jaffa Port, where the prophet Jonah is said to have been swallowed by the whale, visitors can stroll along cobblestone streets with ancient stone buildings that have been converted into trendy art galleries, boutiques, and cafes.  At dusty Masada (a short excursion from Jerusalem), you’ll see Herod the Great’s desert stronghold high above the Dead Sea. Jerusalem is home to the walled city’s backstreets and bazaars as well as the Church of the Holy Sepulchre, the Dome of the Rock, and the Western Wall. Galilee, where much of the New Testament took place, is known as the Cradle of Christianity and offers several key sites associated with Jesus.

Handy Apps to Get to Know Local Culture

The recently launched smartphone app and website Cool Cousin, founded by five well-traveled Israeli friends, is the next best thing to having a buddy in every city on your travel itinerary. Headquartered in Tel Aviv, the app connects travelers to people with similar interests. The way it works is that each “cousin” is given a profile (including photos taken of them at their local haunts) where they build their own map to the city. Users can filter by interest and formulate an itinerary based on the cousin’s tips and even interact via text through a Cool Cousin messaging system. A quick scan of the site reveals that the “cousins” in Tel Aviv are a diverse group of locals including a hotel owner and an art curator.