In addition to honoring the storied history of the Bamum people, the Foumban Royal Museum is a surprisingly whimsical building shaped like a two-headed snake mounted by a giant spider.

One of Cameroon’s most enduring civilizations has always had a knack for preserving its culture. There’s no better way to do that than to cloak it in symbolism as the Bamum people have done with the magnificent Foumban Royal Museum. The eye-catching structure is easy to locate as it stands right next to the Bamum Sultan’s palace in the center of town.

Seven centuries after the Bamum Kingdom was established by its first ruler—Nchare Yen, in 1394—the current Sultan, Ibrahim Mbombo Njoya, is working to preserve the local culture. Njoya oversees the transfer of the Bamum Kingdom’s earliest tools, artifacts, musical instruments, toys, weapons, art, wood and bronze carvings, sacred texts, and implements of worship into a modern structure that is the essence of Bamum philosophy.

For the Bamum people, it seems, self-preservation has always been at the heart of whatever venture they undertake. Designed by a local architect, the Foumban Royal Museum is whimsically built in the shape of a two-headed snake mounted by a giant life-like spider. Adorning the entrance to the museum is a gong, an instrument the Bamum have used over the ages to rally patriotism.

Outdoors Sam Kisika Can You Guess Where the World’s First Campsite Is?
Continue Reading Article After Our Video

The spider in the Bamum culture symbolizes hard work, while the two-headed snake acknowledges their vigilance and power. Outsiders are keen to point out that the snake best describes a cunning that has always served the interest of the ordinary Bamum citizen.

Whatever foreign meaning is associated with the snake, Bamum legend points to a conscious effort towards subtlety and survival. Former Sultan Ibrahim Njoya (1889-1933) is said to have led his army on a coordinated assault on two fronts, crushing two different adversaries simultaneously. After the war, he changed the emblem of the kingdom from a snake to a double-headed serpent. 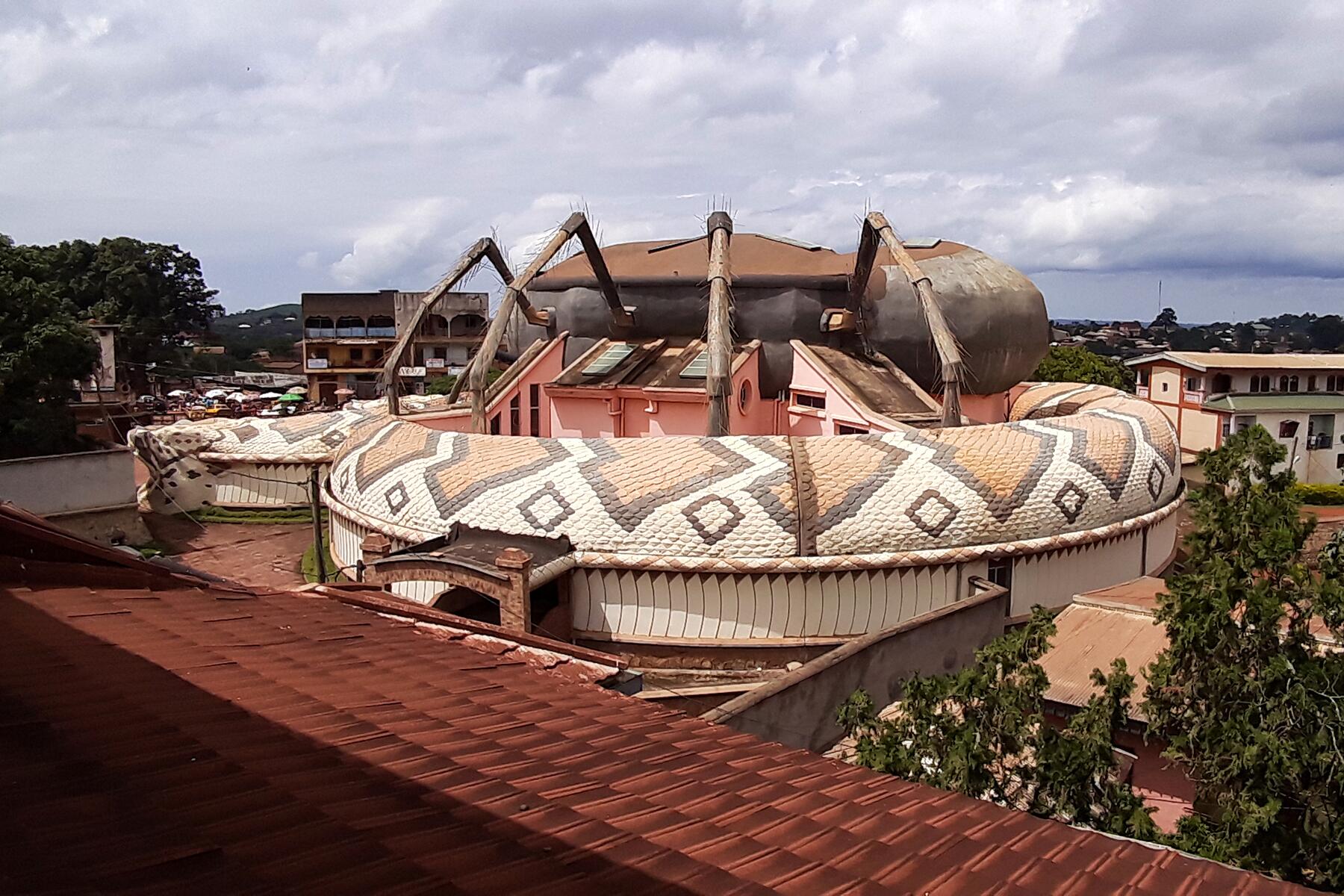 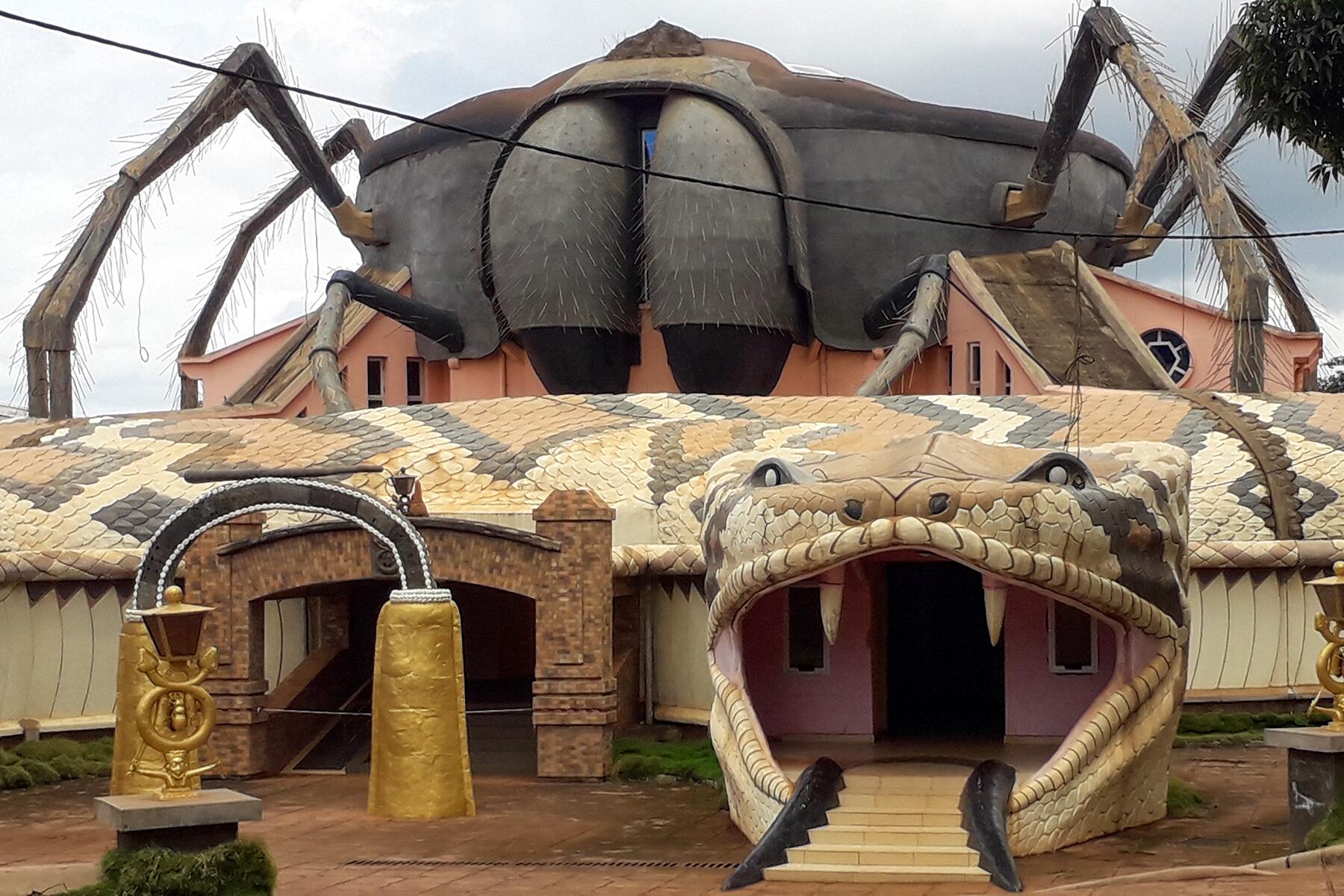 All objects destined for the new museum now reside in the Sultan’s palace, which is open to the public daily. Among the things that will be moved are artistic representations of the Bamum people’s migration south towards the Grassfields of Cameroon, their separation from other Tikar tribes as each sought a better place to settle, and the countless wars they fought to defend and expand their domain.

The kits and tools of Mutngu, the secret society that oversees the running of the state, take prominence within this collection. Its leader, Ta Ngu, is appointed by the Sultan to oversee justice in the kingdom but can call the Sultan to order. They ensure this by holding a public trial for the Sultan every two years to assess his leadership.

In most Cameroonian kingdoms, objects like these are hidden in sacred places where only the initiated have access to them. The Foumban Royal Museum displays these items to help visitors better understand the power structure within the Bamum kingdom.

Religion, too, plays a significant role in Bamum culture despite the faith being chopped and changed over the years to adapt to the kingdom’s needs. The first Bamum settlers were animists but converted to Islam after the Moslem Fulani helped Ibrahim Njoya defeat his neighbors. Njoya then switched to Christianity after the Germans helped him defeat the Nso people, a mission that helped him recover his father’s skull from the Nso palace.

When the Germans refused to baptize Njoya because he had 681 wives, he started his own religion that incorporated elements of animism, Islam, and Christianity. He called this new faith Nwet Nkwete. His sacred texts written in a-ka-u-ku, the alphabet he invented, are also displayed in the palace. Today the revised Bamum script is taught in local schools, and visitors can see the earliest tablets of the original script. To protect his kingdom’s legacy, Njoya invented a printing machine and cut the number of characters in his alphabet from over 500 to a practical 80 by 1918. There are also records of languages spoken by indigenous tribes at the time of the Bamum conquest.

These religious, ethnic, and foreign influences bred a multicultural environment where the Sultan’s family members—and the wider kingdom—practiced different faiths, held different political opinions and learned to live in the same space. Islam became the religion of the Sultan’s court and is practiced by 80 percent of the Bamum population today, but it’s hard to miss the Christian grave of Njoya’s mother right at the center of the palace.

When European colonialists arrived with modern weapons, Sultan Njoya quickly allied with the Germans to fight his enemies. There’s a rich collection of objects from this phase of Bamum history, including guns, armory, and pictures between 1884 and 1960. One of the most curious pictures is that of Austrian merchant Rudolf Oldenburg placing his foot on the throne, with a very pragmatic Njoya ignoring his rudeness even as his aides frown in disapproval.

Equally as fascinating is the Foumban Palace, which was completed in 1917 and is modeled on German colonial architecture. At its conception, Sultan Njoya made provisions for a museum inside the palace. It’s a relic of an ambitious past whose story will now be preserved in the timeless wonder next door.

Out on the streets, it’s hard to find better disciples of their culture than ordinary Bamum men and women. They’re so attuned to its symbolism that they can’t wait to help strangers discover it. For these people, the museum and its gallant tales are guarded inside their hearts.