I went to bury my Grampa, but not before three hours of a terrifying ride through separatist-controlled areas and rabid military checkpoints.

As the writer in the family, there was only one person responsible for editing my Grampa’s funeral program and memoir. Work started on May 30, the morning he died; so as I packed the books into the trunk of a tiny two-door Starlet on June 25, I remembered why I hadn’t seen the patriarch in three years.

They say people from my village are radical; the people from my village say they’re radically fair. I’d been living in a bubble in Bamenda, Cameroon, just far enough to avoid any face-to-face meeting with separatist fighters, but connected enough to see evidence of the war. Now, I had to go bury my Grampa, but not before three hours of a terrifying ride through separatist-controlled areas and rabid military checkpoints.

Our driver swore I was the last passenger he needed to start the journey, I was actually the first. He said we’d leave at 2 p.m.; we left at 3:30. He said he didn’t have enough passengers to overload, but seven of us crammed into his tiny box. I squeezed into the back seat with two women. One was breastfeeding a little girl while the other one fed roast chicken to the breastfeeding mother. The driver shared his seat with a teenage boy and two men sat on the front passenger seat.

I’d been living in a bubble in Bamenda, Cameroon, just far enough to avoid any face-to-face meeting with separatist fighters, but connected enough to see evidence of the war.

As we started on our journey, the cold reminded me I’d forgotten my old blazer at the park. That’s the first blazer I ever bought, that kind of thing you imagine you would pass on to your son. Our tiny box screeched to a halt as we drove out of Bamenda town, and a council worker appeared in front wearing a well-practiced frown. When our driver tried to accelerate he threw a spiky rod in front of the Starlet. That won him the argument. The council worker was collecting a fee for clandos, small vehicles or buses that transport passengers across towns and villages. Unlike taxis, they’re not painted a particular color, so any other car on the road could be a clando. It takes the wily eyes of an experienced council worker to pick one out. After our protests at the delay, the driver called him over and dropped two silver coins in his hand. No ticket. I felt tense as we approached Bambili, a small university town about 10 minutes from Bamenda. I’d been here twice in three years. All the stories I’d heard about attacks and ambushes started to unfold before us. The ascent up Sabga Hill revealed trees that had been felled by separatists to block roads, with burned houses and patches where trenches had been dug to stop armored cars. On the left, down the valley, was a spot where soldiers had jumped to their death when separatists cornered them. This place used to be a vibrant village market with sheds and hawkers selling fruits, vegetables, and meat, but the wild grass had made the sheds barely visible.

The sight of desolation reminded us that we would soon come face to face with Amba Boys. People said they appeared like ghosts. They said they fished out soldiers and traitors just by looking at them. Separatists collected donations from passengers, but only after donors had thrown notes to the ground. Coins neutralized their charms, so they were forbidden. 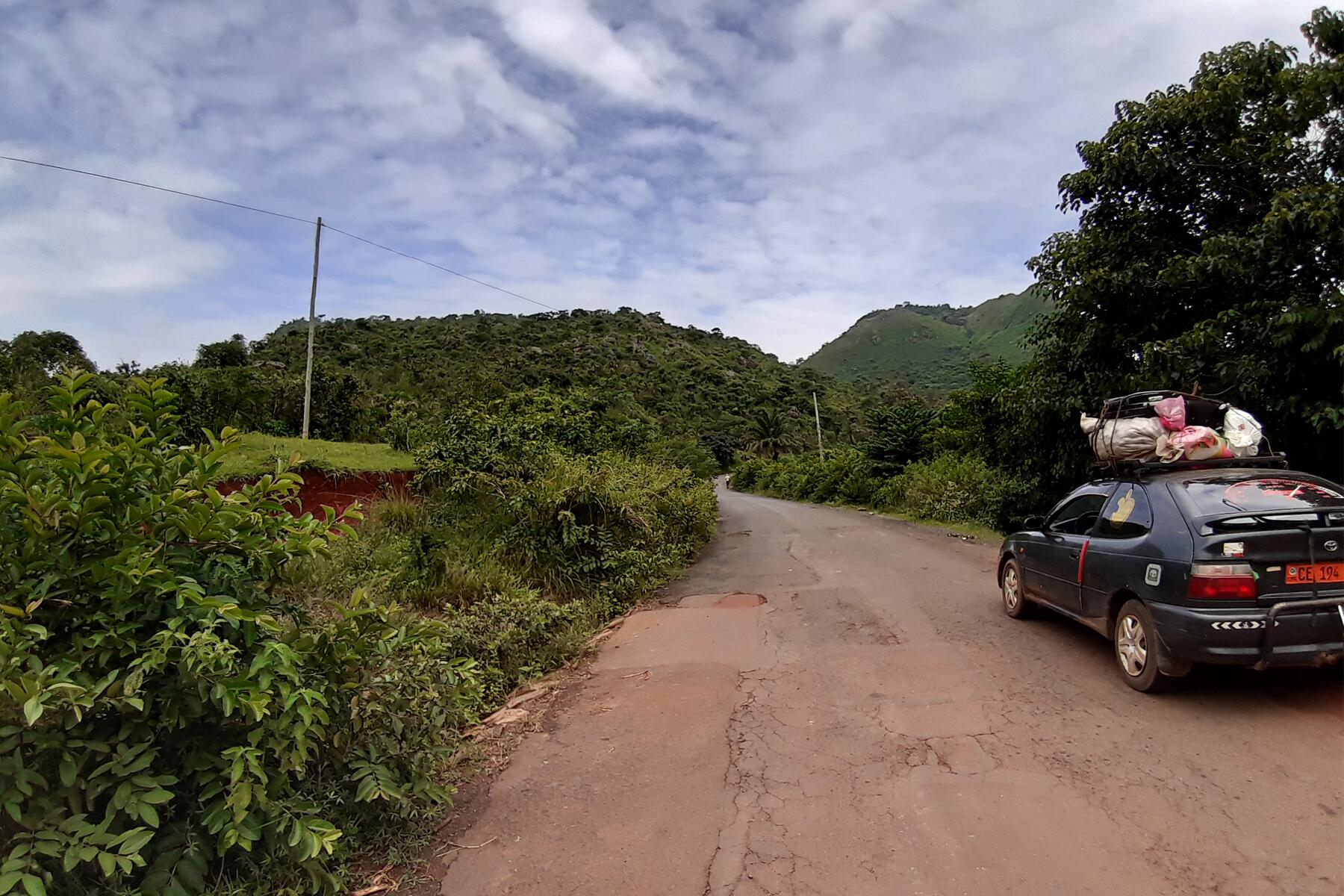 The first guns we saw were from the military. At these checkpoints only the very sick, pregnant women, breastfeeding mothers, and the very stubborn stay seated. We showed our ID cards, then walked a few meters to wait for our car. What followed was another scene of desolation.

At Babessi, scene of some of the fiercest battles, our driver stopped to help his colleague. I paid no attention but heard the other passengers complain that the driver had given away his wrench. At Babungo, the same thing happened, and this time I saw him give away his jack. Our protests didn’t stop him when he stopped again to talk to another driver, but luckily we lost no tool this time.

At Jakiri he stopped to chat with the driver of a Toyota Picnic who’d parked behind us. When he returned he ordered me to switch to the vehicle. I obeyed with all the humility I could manage, cursing under my breath as I transferred my luggage to the backseat of the Picnic. The war had blown up transport fares, but this guy still shortchanged me. I sat quietly in my new transport and supported my books as they swayed across on the winding road.

When we finally arrived at our destination, Kumbo, the only sound we heard was evening prayers from the cathedral’s megaphone. Bullets had rid the market, offices, bars, and restaurants of any life, leaving only the impregnable stone cathedral to hint to the daring stranger that the town had once possessed a soul. The Picnic retreated into an alley and parked away from danger. The driver had taken us this far, but it was left to every one of us to figure out how to get to our homes. 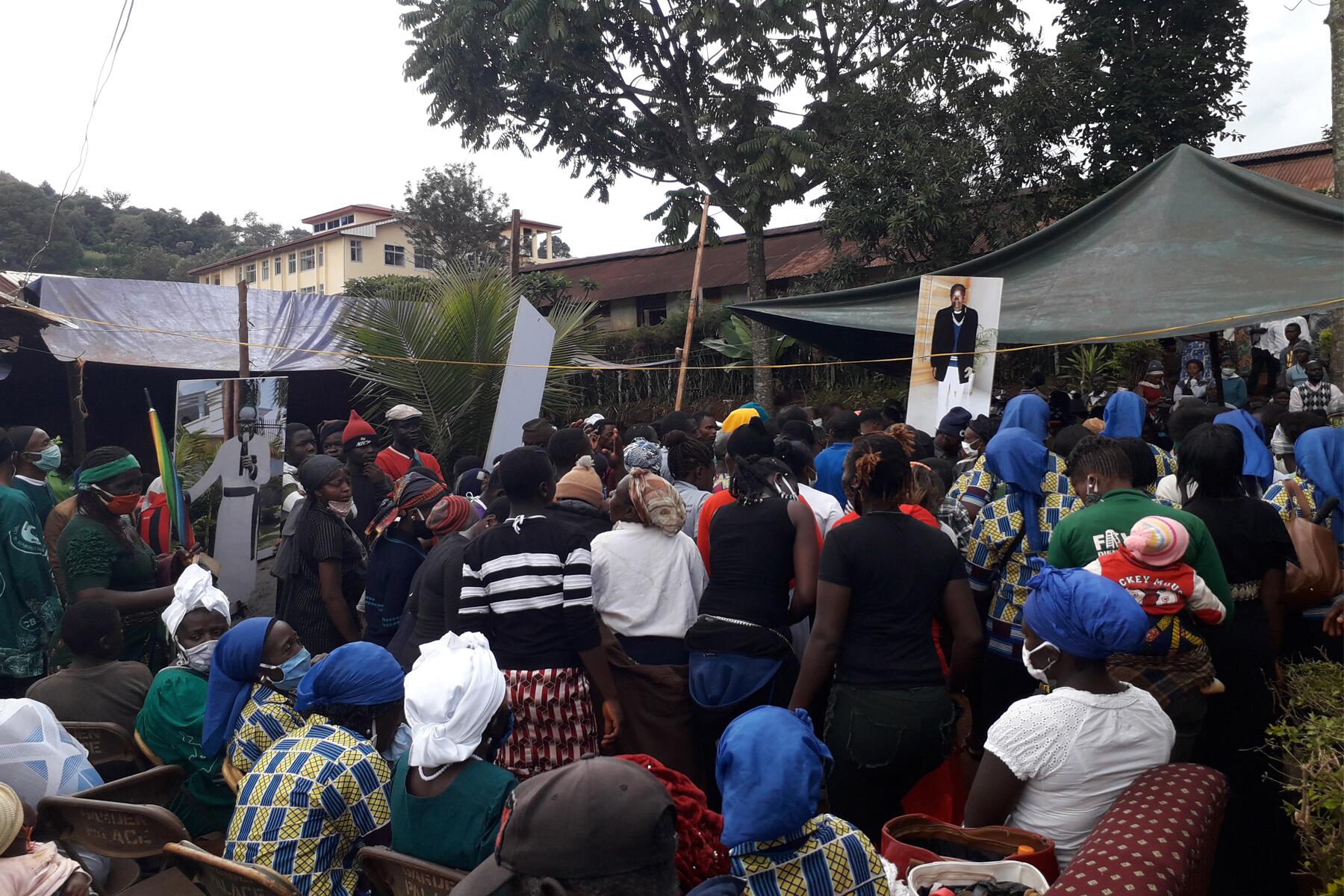 After 20 minutes of trying, someone finally answered and sent a motorbike to fetch me. Before that, a stranger had appeared and offered to find a bike. He returned with his man and I had two. I packed my books on both, and let another man who’d just arrived in a minibus ride one. He was going to my Grampa’s funeral too, and that night I learned he was an uncle.

Separatist fighters had sent word there would be no trouble at the funeral, so when one of them confronted me about taking pictures, I told him where to go. My uncles backed me as the numbers behind the separatist grew. Sensing the tension, I pulled him aside and placated. We bumped fists and they offered me a horn from which I drank palm wine until morning.

At 9 p.m. the real business of celebrating the life of my Grampa started. We sang hymns, played drums, re-enacted scenes from his ministry as a Baptist Reverend. When we sat down to rest around the fire, my mum pointed out a distant relation.

“Be careful around him, he always ends up stealing something.”

That night, when three of us crammed into a tiny bed, I held my phone tight. I woke up to be thankful for doing so–the family rascal had made away with phones and a laptop. But soon word came down that the thief would be apprehended and the items returned.

During the funeral, I felt eyes following me everywhere I went. I was summoned a couple of times and assured of my safety to which I generously responded with a round of whatever was available, or banknotes to purchase it. That also gave me some leverage. When the teen soldier sat on my mother’s chair I told him where to go. He hesitated but finally decided the goodwill of the people watching him was better than a small victory. 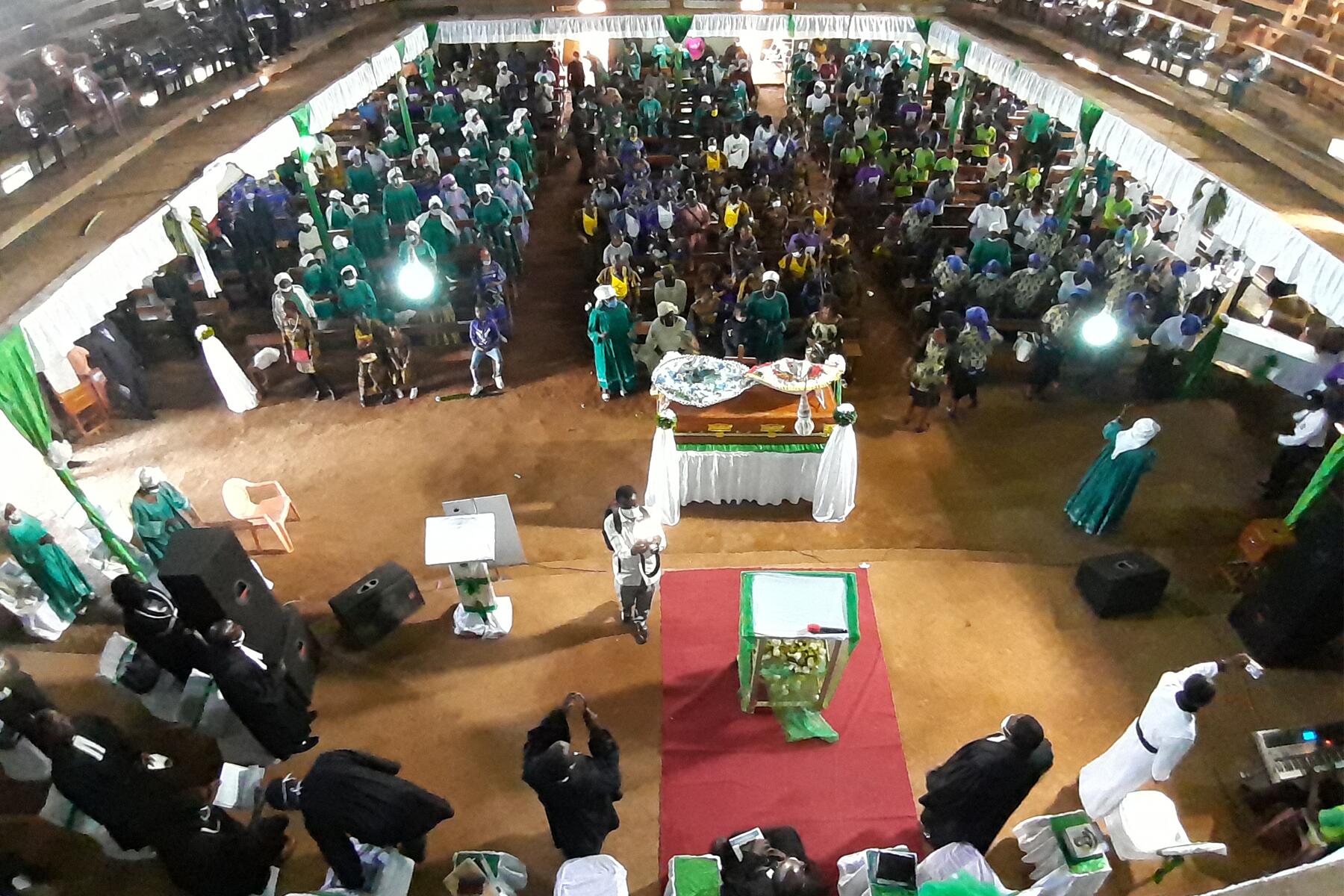 Some separatists had learned over time that their safety depended on the civilians they lived with, and over time many civilians had formed strong bonds with these fighters they depended on for protection from the military. In stable separatist-controlled areas, that was the social contract, albeit slightly skewed towards the gun owners. The military understood this, hence the impunity. What they called collateral damage was, in fact, revenge.

I’d told the separatists I’d stay for a couple of days, but quietly left the morning after the funeral. I quickly found out I couldn’t really escape. On my way back we saw the boys fully armed. They had set up checkpoints all the way to Bamenda, some very close to military checkpoints. They would talk with our driver and then let us pass, and then, just around the corner, we would stop at a military checkpoint and walk past to show our ID cards. The war was still raging, but it felt like these enemies, for today at least, had chosen not to fight. 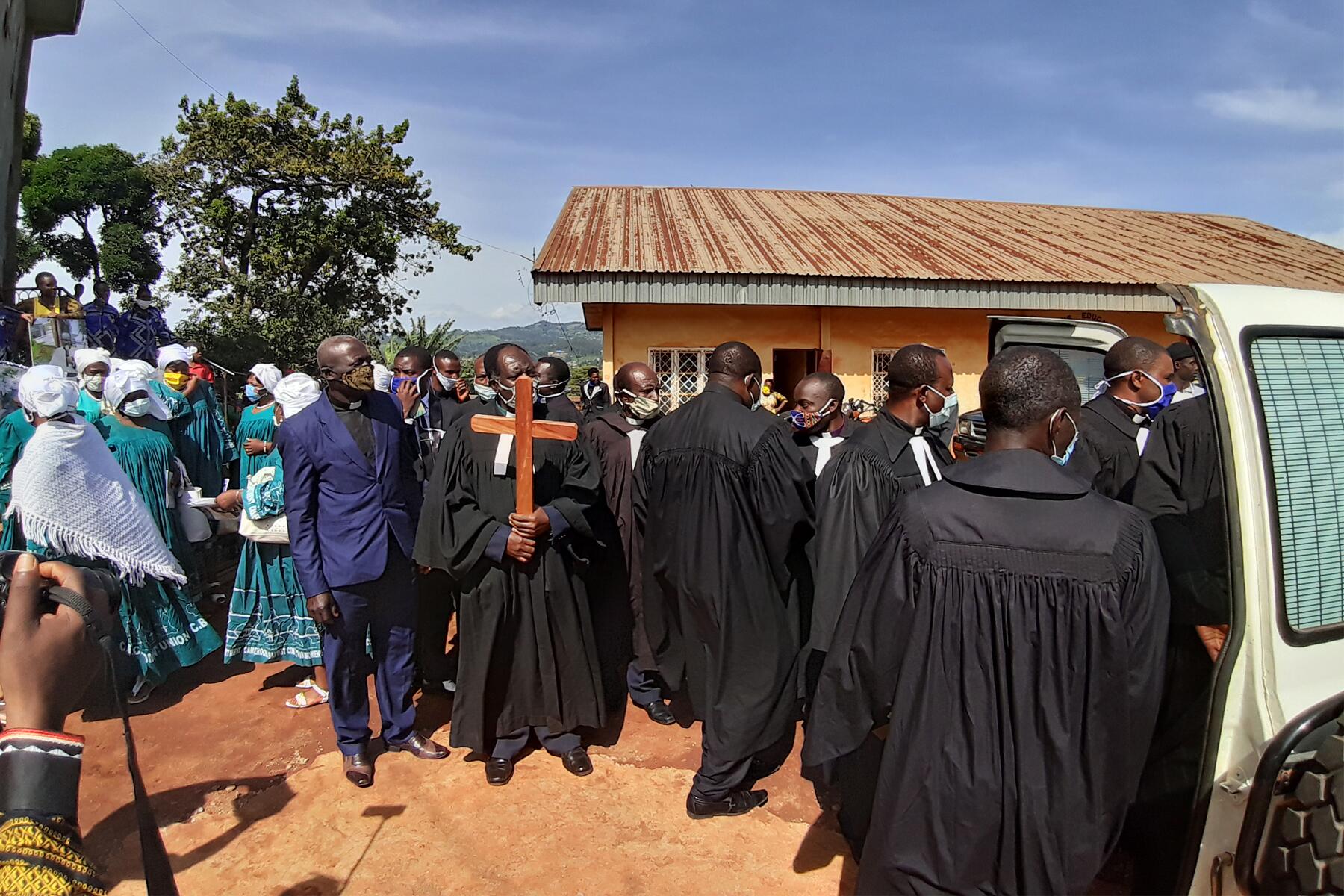 Back at the park in Bamenda I asked around and got lucky. A bartender had saved my blazer. I rewarded his kindness with beer, at 9 a.m. A couple of days later I heard the family thief had been caught and all items returned. I was stunned by the swiftness and wondered again about the military and the separatist Amba Boys practically standing side-by-side in broad daylight. The ordinary people just wanted the simple things that made their lives better in an environment where they could best express themselves–all while the oppression from the top provoked only chaos.

Thank you for this fascinating essay -- your words brought this beautiful, troubled region to life for me. The photos are incredible as well. I hope you stay safe and well.