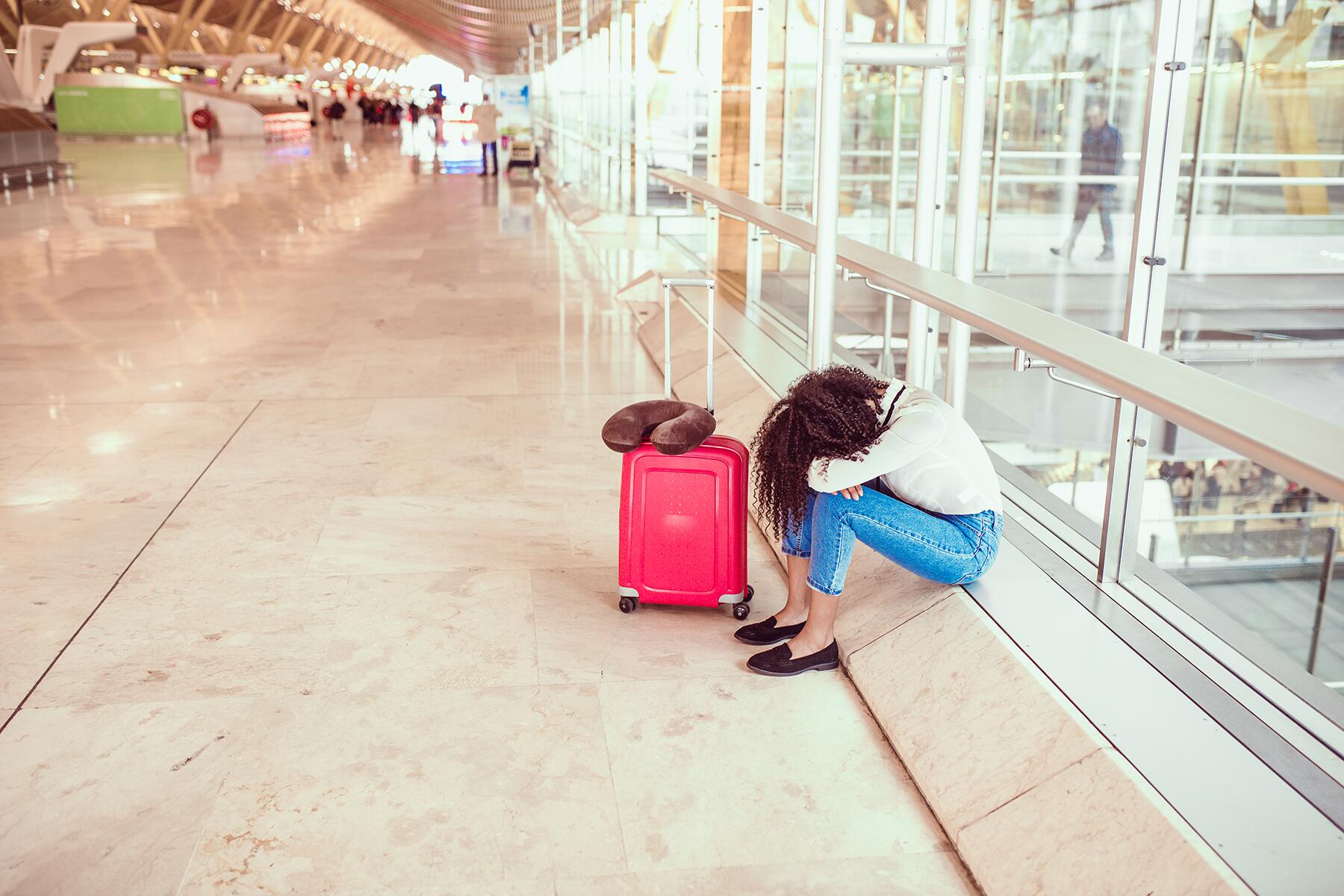 News Christina Mueller Yes, You Can Visit Los Angeles Without a Car. Here's How to Use the L.A. Metro Subway System
DestinationsAfrica and Middle EastTravel Tips • Trip Ideas
Kanuman/Shutterstock

After traveling across Africa and writing a memoir about it, Boipelo Tladinyane Hlubi knows a thing or two about navigating this exciting continent.

Bored with her computer systems career, Boipelo Tladinyane Hlubi, a South African solo traveler, resigned and embarked on her dream trip of touring all 54 countries in Africa on public transport. This desire to tour her continent was birthed after sharing interactions with African nationals and other tribes from South Africa, which sparked curiosity about the various cultures that shape Africa.

Despite the fact that she had already toured four continents, it is Hlubi’s solo travels in Africa that captured her heart the most and inspired her to write a memoir titled: A Safari Back to Self: Backpacking 54 Countries in Africa. From navigating between cultures and religions, surviving deportations, jumping on and off moving vehicles, and the endless customs processes—here is what Hlubi wants you to know about solo traveling throughout Africa.

Changing the Narrative Around Africa Travel

African countries are similar in terms of food, a shared love for music, language backgrounds, and our instinct to care for and relate to one another. This also applies to the natural attractions and beautiful scenery that we have. When it comes to our borders, most Africans practice the idea of having “open borders,” even if it’s not legally recognized.

Hlubi wishes for non-Africans to know about the continent’s natural beauty, including its diverse landscapes, stunning rivers, and great weather, and to prioritize African countries as a destination. When it comes to Africa, the hope is to highlight its beauty and not just the challenges experienced by travelers—it’s time to change that narrative.

Africans Are Welcoming to Travelers

Hlubi says that she had an easy journey, unlike the popular perception that traveling solo as a woman is tough. Africans are welcoming, and she describes feeling at home in every country she visited. Africans are hospitable people and will go out of their way to take care of their guests in terms of accommodation and food. But traveling as an African in some African countries is tough because the residents, security, and hospitality industry are often used to handling non-African tourists. Sometimes this leads to the mistreatment of African travelers, something that Hlubi hopes will change. African people, as well as their governments, should change policies and perceptions of African travelers in order to make it easy for them to travel.

As much as there are routes connecting all inland countries, Hlubi recommends travelers focus on traveling via developed roads in an effort to save time and sanity. When it comes to countries with better transport, Uganda and Rwanda are amongst her top recommendations. These countries have a system where passengers are given a departure time of when the bus leaves, and it does, regardless of whether the bus is full or not. This is what made time management easy for her.

Be Prepared in Case of Immigration Challenges

For Hlubi, her worst immigration experiences were in the countries where she had to strictly apply for a visa in her country of origin while she was traveling. The easiest immigration experience, in terms of visa processes, was Ethiopia. In addition, it was easier for her to travel to countries bordering South Africa since their governments have no visa requirements between them.

However, in one of the countries where she required a visa, she was wrongfully accused of not meeting the requirements. This was despite the fact that her documents were in order. Hlubi had to prove her case via the South African embassy, which intervened on her behalf. She was eventually permitted into the respective country.

For other travelers, she advises always having relevant contact information for their home embassy whenever they travel, as anything might happen.

Tips on Packing for a Solo Trip

According to Hlubi, there is no real strategy for packing except that one needs to ensure they have enough toiletries and that everything fits in one bag (potentially with some space left for things that you will buy along the way). Hlubi carried her books, a hat, and not more than 10 outfits comprised of jeans and some light clothes. She also packed some dresses, skirts, tops, head wraps, and trousers. When it came to shoes, she had a pair of sneakers, a pair of sandals, and a jersey-knit shoe. When it comes to packing, rolling is great for t-shirts and casual dresses, but not for stuff like sweaters which should be folded.

The Importance of Experiencing Other Cultures

Coming from a country that is predominantly Christian, Hlubi found it interesting to experience Islam. What stood out for her was how Muslims and Christians engaged in each other’s religions, particularly in Guinea Bissau. During a backpacking journey with the Hlubi tribe in South Africa, Hlubi realized she had a lot of misconceptions about religion. She had a chance to experience a wedding and a funeral, and as much as cultures differ, she recognized the similarities: ululations, music, dancing, and food.

Africa Is Home to Exciting Nightlife

While most people think that Africa is all about wildlife, Hlubi says that there is much more that one can experience in Africa, including a vibrant nightlife. From live music to DJs, with a variety of bars and clubs to choose from, anyone who loves partying could never be bored. Hlubi especially loved the Nigerian nightlife: a bucket list experience come true. As a tip, especially for women solo travelers, she advises that a traveler goes to a place where they are familiar or with someone they know (for safety purposes). If you are unsure about what to wear, a balance between chic and comfort works. For instance, jeans and a cute top, so long as you are respectful of the country’s culture.

The Benefit of a Journal

During her travels, Hlubi kept a journal and would also share some of her experiences on social media in order to shed light on the African continent. She believes that this will inspire many to tour their home countries and also work to change some aspects that make travel difficult in Africa. A journal, too, will bring back beautiful memories of the travel experience. Hlubi was able to translate her experience into a book that took around a year and a half to compile. The book has inspired people to want to experience the same Africa that Hlubi fell in love with.

While it has always been the myth that economic constraints make Africans travel less, Hlubi believes that travel is not a foreign concept, with the evidence that our elders have always traveled, mostly in search of greener pastures. However, it has currently evolved toward luxury and not so much for survival, which adds an exciting and laid-back element to it.

Hlubi notes that social media has played a great role in making information about the beauty of Africa more accessible to people. This has, in turn, resulted in more people wanting to experience these places. Lifestyle changes in terms of when to start families, remote working, homeschooling, and African pride have also played a role in the rise of African travelers.

Tips for Traveling Around Africa

Hlubi says that the biggest requirement is to arrive everywhere with a figurative clean canvas, ready to accept whatever paint gets thrown at it. Try out the food, learn the language basics, and know your currency exchange rates. That’s how you will best learn about the different environments and appreciate them for what they are and what they contribute to your life.

Second, don’t disrespect cultural practices or have a tight time schedule when using public transport. The third is to always ensure that you carry some dollars or euros to exchange for local currency and avoid getting stuck due to the unavailability of an ATM or any such currency traders.

Another tip is to ensure you get the required entry documents to lessen the immigration hustle and try to have current contact with your embassy in the country to which you travel. Always have a map that indicates the route and last but not least, use the time on public transport to have a conversation with the riders. You might learn a thing or two about the country, its people, and its culture.