When the nation practically ran out of hand sanitizer, these distilleries said, "Hold my beer (whiskey)," and took on the cause themselves.

When it started to don on the American public that COVID-19 was going to be a serious problem, people flocked to stores, Amazon, and anywhere else they could to buy out the national supply of hand sanitizer. Price gougers like this guy looked to make a profit off of the situation, which helped spur an even larger crisis with shortages for frontline workers including doctors, hospital administrators, police forces, and fire departments. The national supply of sanitizer became so hard to come by that producers were completely unable to meet the demand.

Enter the newest heroes of this national emergency: beer/liquor distilleries. Some cocktail purveyors are helping out in their own way, like Sourced Craft Cocktails, who are donating parts of their proceeds to the United States Bartenders Guild’s Bartender Emergency Assistance Program. Other major companies like Bacardi and PATRÓN® tequila have pledged millions to support frontline workers. But the biggest difference-makers are the independent distillers who have turned their factories into hand sanitizer distribution centers, practically overnight.

“I thought there might not be a need or a want, but then firemen started stopping in and police stopping in, and I realized a lot of people need this. You saw the price gouging of everything going on and we just wanted to get it in people’s hands. We decided to pass out our smaller bottles for free,” said James Fowler, owner of the Sugar House Distillery in Utah. “Then every city around us started calling and we’ve made the decision to sell to cities and be careful about where everything is going. Yesterday, we had 500 bottles and within three to four hours they were picked up and gone.”

According to multiple distillers, turning their warehouse into hand sanitizer factories was relatively easy. It was the demand that blew them away.

“The formula from the WHO is simple and 84% is ethanol. In a couple of weeks we should have 4,000-6,000 four-ounce bottles ready to go,” said Bryan Ricard, the Marketing Director for Sons of Liberty Distillery in Rhode Island. “The part we weren’t expecting was the business side of it. In a day, we had 250 requests. Everyone needs hand sanitizer. Now we’re filling quarter-gallon and half-gallon jugs. Obviously, government and medical-related, we’re donating as much as we can. Most are manufacturing and industrial companies that we’re selling to. Boston PD is coming tomorrow and we’re donating 800 spray bottles to them. One for each cruiser.”

One of the most incredible and heart-warming results of this crisis is the amount of sanitizer these companies are simply giving away. Arthur Hartunian, the owner of Napa Valley Distillery, said, “The main reason we’re doing it is there’s a shortage of sanitizer in Napa. We live and work here and are part of the community. It’s part of our culture to give back. We’re proud to do it. When we realized there was a shortage of sanitizer, we realized we had the raw materials to make more in a relatively inexpensive way and give it away to our community. We’re giving the community everything they need. We’ve giving away to the point where we’re out. We’ve gotten calls from fire and police who insisted on paying for it, so we charged a nominal cost because they’re actually forced to pay…we’re expecting to produce now about 250 gallons. We decided to continue to support our community by offering small bottles, but we’ll have to sell some of it to keep our lights on.”

One thing that has become abundantly clear, however, is the shortage is very much still here, despite what these distilleries are doing. According to Steve Conlin, the CEO of Ogden’s Own Distillery in Utah, “We have a line 10-12 deep at all times at the retail store. We’ve made 5,800 liters so far and plan on another 4,800, so we’ll be up over 10,000 liters. We can empty out our warehouse every day. I could sell $1 million a day if I had it. I literally had someone from Hill Air Force Base come in and say they were authorized to spend $100,000. We delivered 21 gallons to Air Traffic Controllers.”

So, let us raise our glasses to these unbelievably heroic distilleries, donate wherever you can, and stop hoarding sanitizer so your frontline workers can save the rest of us before it’s too late.

Here’s a list of heroic distillers who have turned their operations into sanitizer factories.

Two companies in California are teaming up to produce 16-ounce hand sanitizers and distributing to local businesses. Devil’s Creek is producing the stuff and Mammoth Brewing is donating supply to distill into alcohol. Residing in Oceanside, California, Pacific Coast Spirits is providing hospitals, companies, and locals with 2.5-ounce spray bottles of sanitizer after converting their supply for the cause. Napa Valley Distillery is giving away all of their converted sanitizers to the entire Napa Valley community. Their bottles are now labeled with “Be Strong Napa–Just Say NO to COVID-19.” When Denny Bar Co. in Etna, California heard that sanitizer needs were high, they immediately got to work by converting their factory to make sanitizer for the community. They’re giving away two-ounce bottles and cooking up family-sized meals to go. Based in Paso Robles, California, KROBAR is helping hospitals, public works, frontline workers, and others stock up on much-needed sanitizer supplies.

Usually known for its kosher bottles of whiskeys and gins, KOVAL, in Chicago, has turned to sanitizer and is providing it for retirement homes, the medical community, and frontline workers. They have a GoFundMe page to help keep the lights on and continue this heroic effort. 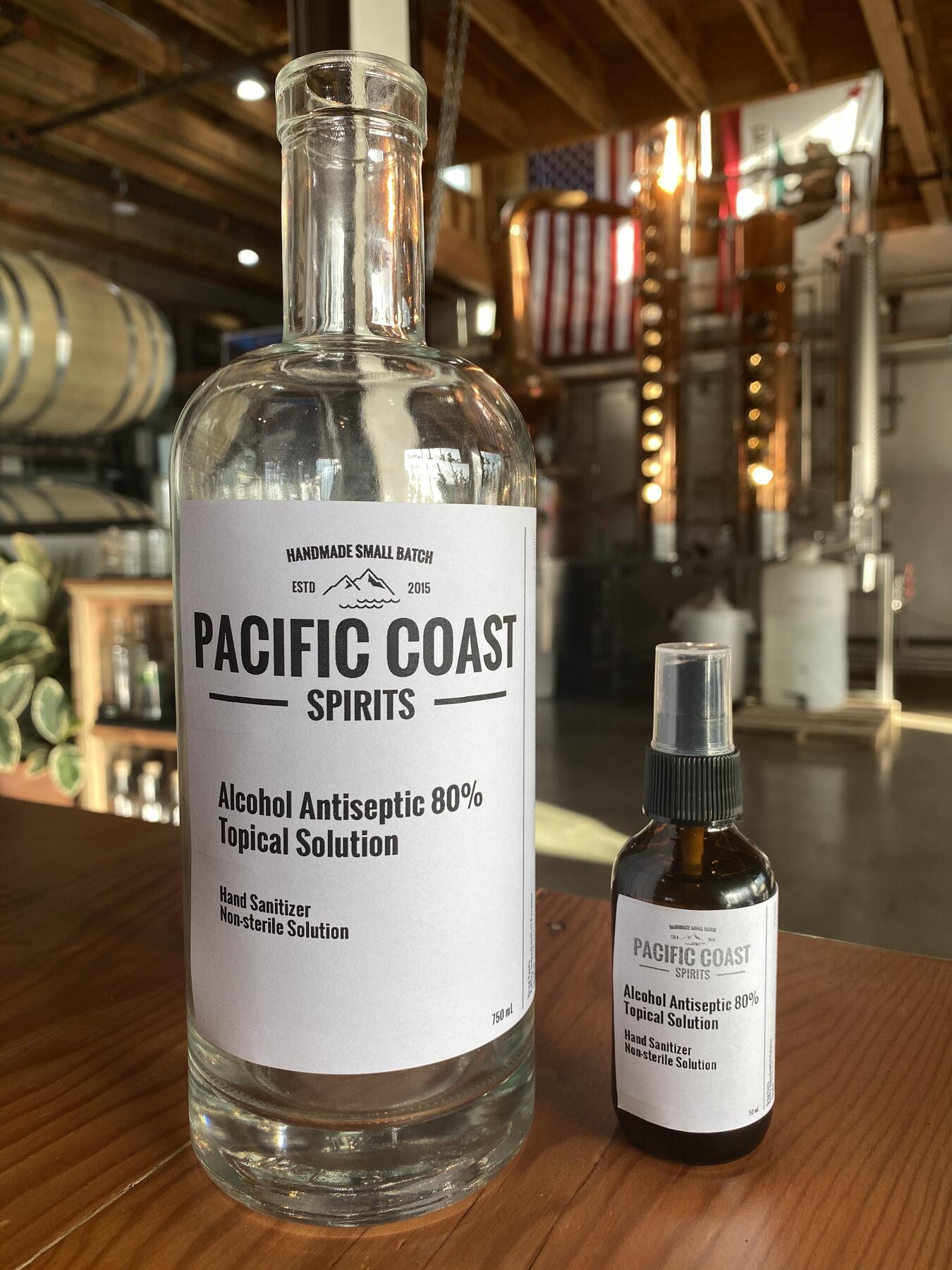 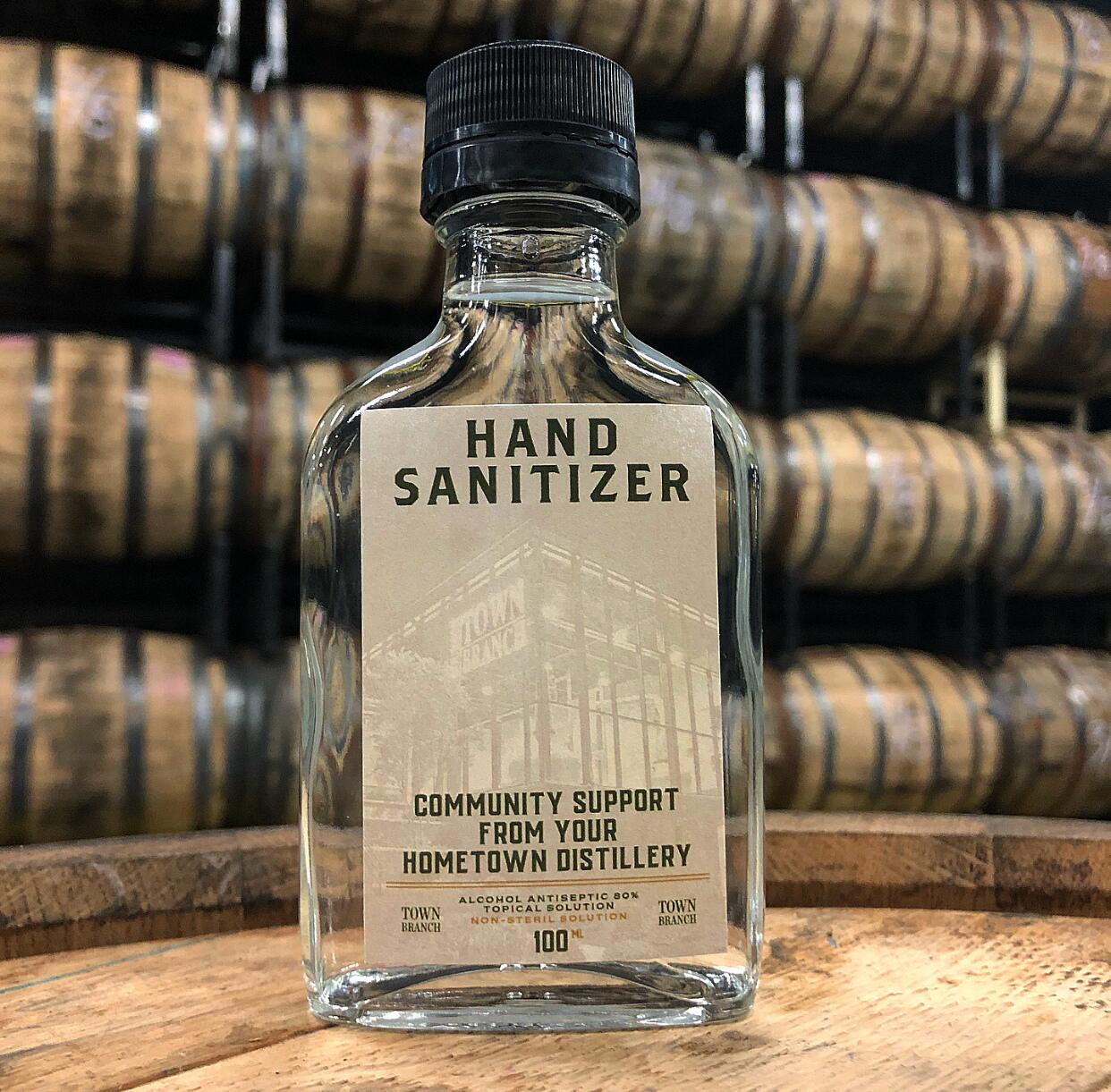 Buffalo Trace Distillery is donating Clear Spring 190-proof grain alcohol that can be used on non-porous surfaces to kill pathogens. The company is giving 12 bottles each to first responders, police forces, healthcare professionals, and more. Lexington Brewing & Distilling Co. in Lexington, Kentucky, is known for its bourbon. But now, they’re going to be recognized as heroes as they’re producing sanitizer for free.

Black Button in Rochester, NY, is producing sanitizer in 750-milliliter glass bottles and distributing them to doctors, hospitals, nursing homes, homeless shelters, and others. Quickly turning their plant from vodka to hand sanitizer, Hollerhorn Distilling has branded their sanitizer as the “Big Green Machine” and is helping local companies restock their supplies for free. Finger Lakes Distilling has opened its doors and is allowing local residents to bring empty bottles that they’ll refill with sanitizer. They’re also supplying local healthcare providers and law enforcement. Another upstate New York distillery, Antler Run is producing sanitizer for nursing homes, health professionals, and the larger community. 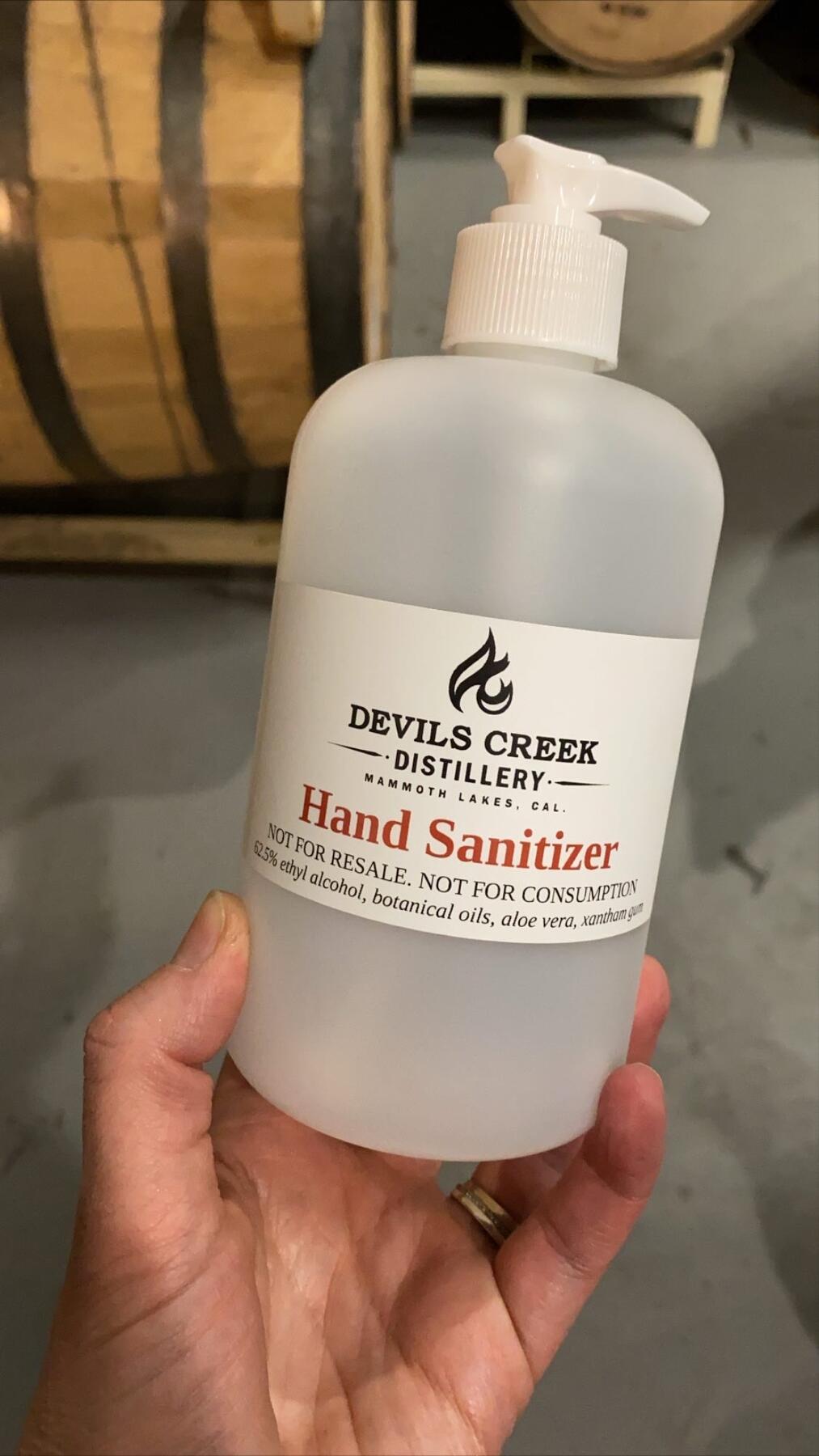 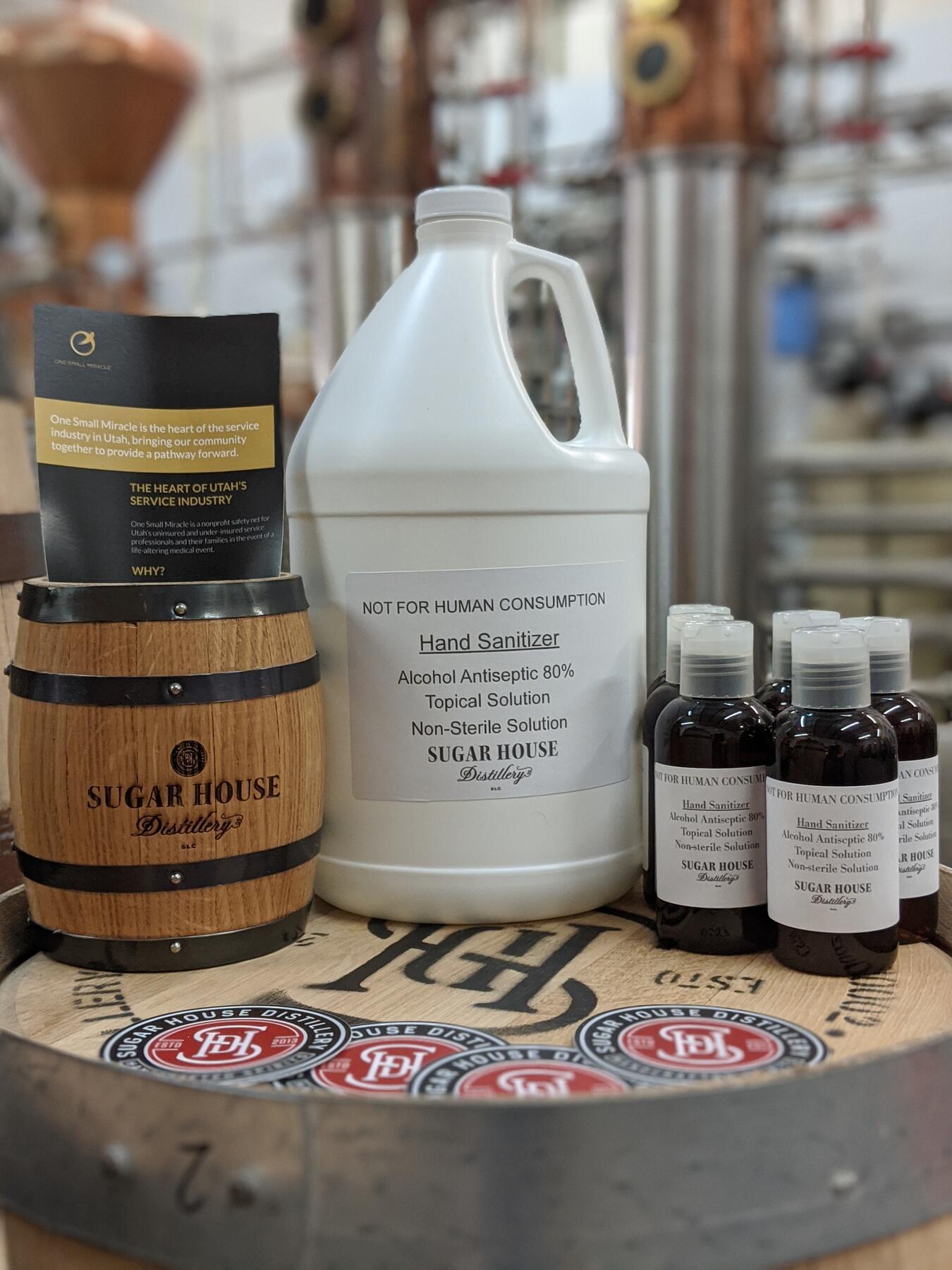 One of the largest whiskey distillers in America, Whiskey Ranch is donating sanitizer for domestic use.

After clearing FDA hurdles, Sugar House Distillery in Salt Lake City converted their alcohol to sanitizer and is heeding calls from the state of Utah, the LDS Church, police and fire departments, and more. From the moment they got the recipe from the WHO to make sanitizer, Ogden’s Own in Utah started producing the stuff in spades. The distillery is now servicing air traffic controllers, air force bases, and others.