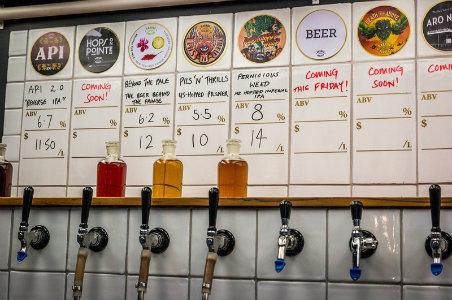 Wellington easily deserves the title of Craft Beer Capital of New Zealand, due to its plethora of breweries, beer bars, and homegrown culture with a near-religious devotion to brew. However, its the area around Nelson, on the northern tip of the South Island, that supplies a finite stream of hops to the nation’s brewers as well as overseas.

What makes New Zealand beers so flavorful and aromatically unique? Growers cultivate several types of hops that are exclusive to the islands. The most recognized is Nelson Sauvin, with a flavor of freshly crushed gooseberry, likened to a Sauvignon Blanc (which can also smell like a sweaty armpit, depending on the nose of the beholder). The Riwaka, Motueka, and Pacific Gem varieties bring variations on tropical fruit notes and add incredible aromatic complexity. 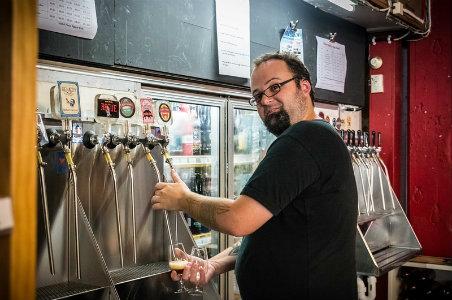 A visit to Regional Wine & Spirits is practically mandatory when in Wellington. The shop is known around the country and although the store lacks the word “beer” in its name, Regional still earns the top honor for selection and knowledgeable staff. Pop in and ask for Kieran Haslett-Moore, the head brewer for North End Brewing Co. who can spout beer knowledge like a human encyclopedia. He’ll spend all day chatting and letting you taste from the in-store taps if the store is empty and you have the time.

Booze Eva Morreale Build a Better Bar Cart: Stock up on These BIPOC-Owned Wine and Spirit Brands
Continue Reading Article After Our Video 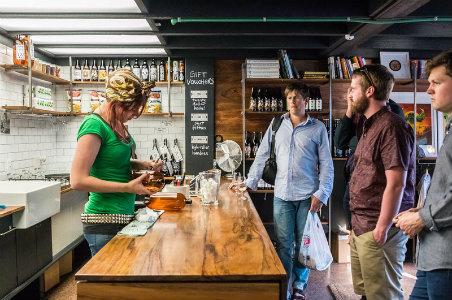 Garage Project requires a bit of a hike, as it sits on the edge of town, so either grab a $10 cab or seize the opportunity for 20 minutes of exercise. Originally a nano-brewery, this small-production, nearing-cult-status operation prefers to brew one-off experimental kegs rather than develop a core range of beers. They work with highly unusual ingredients and hops; if the beer fails, the batches are small enough to avoid financial disaster.

ParrotDog was started as a home brewing project and later turned into a commercial outfit. Taste the current line-up at their downtown cellar door, including BitterBitch, their flagship beer that was named Best in Class at the Brewers Guild of New Zealand Beer Awards in 2012. 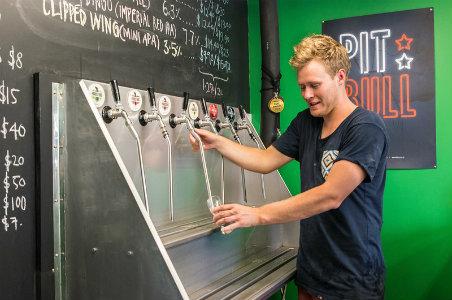 Fork & Brewer, a large brewpub established by the folks behind The Malthouse and Tuatara, brews a wide range of styles on-site. While the atmosphere lacks personality, Fork & Brewer places an emphasis on food and features 40 taps, in case you’ve got the stamina to plow through several pints.

Rent a car and spend the day out of town. Drive 45 minutes north to Kereru Brewing Company, named after a native Kiwi bird. Once a nano-brewer, former Bostonian and owner Chris Mills focuses on quirky, English-style beers. Next, swing west to Tuatara Breweries, located about an hour’s drive from Kereru along a curvy but scenic road.  A respected leader of the craft-beer movement, Tuatara has a high production output, making their beers easier to find in stores than others. The brewery offers 45-minutes tours, but can only accommodate 20 at a time, so advanced booking is advised. The owners named the brewery after a native, lizard-like reptile, so look for the bottles adorned in spiky scales as homage to the ancient creature.

Wellington’s explosive beer scene naturally has fostered a proliferation of outstanding bars catering to beer enthusiasts. Although you might to be tempted to focus on regional brews, keep in mind the entire country serves as a hotbed of innovation. Use your bar-hop to track down producers such as Yeastie Boys, Epic, Liberty, Three Boys, Mussel Inn, Moon Dog, and Panhead.

The catchphrase at Hashigo Zake is “no crap on tap” and owner Dominic Kelly fulfills that promise. Kelly opened this joint after returning from a stint in Japan and his goal of emulating a cult beer bar in Tokyo has succeeded, largely due to his predilection for extreme and peculiar beers.

A self-described “beer geek heaven,” Little Beer Quarter is the brainchild of four women. With lights festooned in beer-bottle lampshades above the bar, the rotating 14 taps, two pulls, and over 100 bottles are the perfect place to try a smattering of the country’s best brews.

Also try The Malthouse, which has amassed a thoughtful inventory of the nation’s most striking beers, while Goldings Free Dive, with its terrifically apropos name, is a shabby, but charmingly eccentric establishment tucked away on a dead end alley near Cuba Street. Finally, HopGarden is your best bet for quality dining, which you’ll eventually need while working through their collection of draught and bottled craft beers.