Where Was the Failure: Dhaka, Bangladesh

After college, my family and I went on a three-month trip to Bangladesh. I felt a whirlwind of emotions: excitement and nervousness, but mostly, anticipation to explore the motherland. Culture shock wouldn’t be a thing for me since I grew up speaking the language, right?

After a 15-hour flight from Los Angeles International Airport (LAX) to Dubai International Airport (DXB), a three-day stopover in Dubai and then finally arriving in Hazrat Shahjalal International Airport (DAC) in Dhaka four hours later, we were wiped and ready to sleep for days at my grandma’s house. Once we arrived at grandma’s house, however, we were met with relatives and oh so many sweets! Everyone came prepared with traditional Bangladeshi sweets, childhood stories of me and my siblings on our last visit and, in the same breath, emphasized stories of theft, kidnapping, poisoning and stabbing happenstances that can take place in a CNG (compressed natural gas rickshaw) or simply walking down a dirt path to get to the corner store. Instantly, my excitement was consumed by paranoia and anxiety.

Consequently, much of my trip involved parental supervision. One day, my mom and I took a 10-minute rickshaw ride from grandma’s house, which cost us 30 Bangladesh taka ($0.35 USD), to Bashundhara City complex—the second largest shopping center in Bangladesh. We crossed the ongoing traffic: bumper to bumper, side view mirror to side view mirror (because neither pedestrians nor vehicles have the right of way).

I was under the impression that there wouldn’t be price haggling involved since we were going to a mall and not an outdoor market; but even in a mall, everything from food to clothes to jewelry could be bargained. I was terrible at it, and my broken conversational Bangla revealed that I was a bideshi (foreigner). My mom was born and raised in Dhaka so she knew what to do: ask the vendor for their price, counter that with a lower price, expect an initial “no” from the vendor and prepare to walk away. Most of the time, her method worked and the vendor would call us back. But if they didn’t, it was best not to become attached to an item. 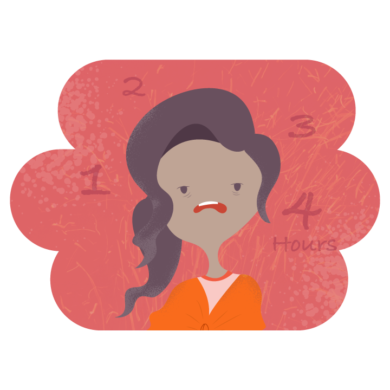 We were in hour two of this constant back and forth: I was drained both mentally, physically and whining (actually whining!) to go home. But my mom, a powerhouse in her own right, was fueled with the energy and confidence one can only achieve from winning a head-to-head battle.

I told her I wanted to leave.

“Just one more shop,” she responded.

After a grueling two hours spent at the same sari shop, I was exhausted, hangry and frustrated. Not even a Snickers bar could have helped me at this point.

Unable to continue further, I announced that I was leaving. Clearly, my mom didn’t take me seriously because she knew I didn’t know the way back to grandma’s house. As she walked into the next shop, I swiftly turned around in a huff and bolted down the 15 flights of food and retail, and out into unfamiliarity for the first time.

All I had to do was walk back the same way I came. I trailed closely behind a child—maybe 7 or 8 years old?— who nonchalantly crossed the oncoming traffic and to the other side of the street where the rickshaw riders waited for passengers. I mentally made an inventory of what I had:

(Well, I wasn’t really planning on getting lost, but there we were…)

As I walked by the rickshaw riders, one asked me if I was lost. “No,” I responded without making eye contact. I knew I didn’t know what I was doing, but they certainly didn’t need to know that. Another rickshaw rider down the assembly line asked me where I wanted to go.

“How much to get to Hatirpool?” I asked. He gave me a number that I didn’t recognize, so I walked away with feigned confidence. My familiarity with numbers in Bangla was limited: I knew the range from one to 30 and 100. Nothing else in between. So, I decided that I’d get on the rickshaw that agreed to take my 100 taka offer—a 230% markup.

I approached another rider. “Will you go to Hatirpool for 100 taka?” He gave me a strange look and declined. 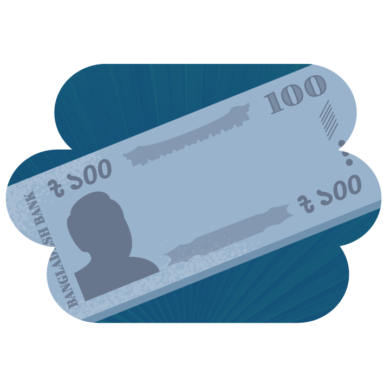 Was my offer too low? My mom and I only spent 30 taka to get to the mall.

I asked the next rickshaw rider down the line if he’ll go to Hatirpool for 100 taka. And again, I got a strange look—a combination of confusion and disbelief, then followed by a smirk—but right away, he told me to hop on. I did and off we went!

Finally, I’ll be home soon. I looked at my watch to keep track of the 10 minutes from my current location to grandma’s house.

The rickshaw rider rode past shops, construction sites, then under a bridge. Have I seen that bridge before?  I wasn’t sure. I looked at my watch. 30 minutes flew by. I looked around the area in search of a familiar sight, anything that was recognizable. Nothing. Finally, I summoned up the courage and asked him, “Bhai, where are you going?”

HatirJEEL?! That was one of the areas my relatives warned me about: stories of abduction and brutal mugging by knifepoint inundated my plan to appear calm.

“Why are you going there? I said HatirPOOL, not Hatirjeel!” I said in a panic.

“You didn’t say that. Hatirpool is too far away now,” he responded.

“I said Hatirpool! Take me to Hatirpool!” I couldn’t conceal the panic on my voice any longer. I was officially freaking out.

It had been 50 minutes since I got on the rickshaw.

Indignantly, he muttered something under his breath and turned around the rickshaw. Again, we rode under the bridge and past the construction sites and line of shops, swerved through cross traffic and turned into a narrower pathway. The maze-like pathways were a little familiar but I still didn’t know which was home.

From the corner of my eye, I noticed a group of children running out of a pathway we were riding past. They shouted something to the rickshaw rider. Are they saying stop? I didn’t understand what they were saying, but the rickshaw rider slowed down when they caught his attention. As the group of children ran closer to the rickshaw, I saw a familiar face amongst the group: my little brother. In a flash, I told the rickshaw driver to stop, ecstatically hopped off and hugged my little brother as if I haven’t seen him in years. The children were—literally—cheering that they found me. My brother was upset that I had walked away but relieved that I made it back safely. He filled me in on the events that transpired after I left:

My aunt knew all the children in the area and the local shop owners, so she asked them to keep an eye out.

Just moments after I was gone, my mom called her sister in a panic that she lost me. My aunt knew all the children in the area and the local shop owners, so she asked them to keep an eye out. Although it was a scary situation to be in, especially without a phone OR any contact information OR the ability to communicate well in Bangla, and the fact that my treacherous endeavor could’ve easily gone sideways, my family found the entire situation to be ridiculous but hilarious. When someone recounts the story to this day, I get mixed feedback from, “She’s fearless” to “That was dumb…she could have been kidnapped.”