Flying to the Midwest to visit Grandma might not be the most glamorous of voyages, but that’s no reason you can’t look fly when traveling.

Domestic travel is often a requirement rather than a choice. A flight from one local airport to another might be a necessity to visiting family or tending to business. But just because the trip might be short and the motivation uninspired, you don’t have to leave your style inspo at home.

In search of non-basic travel outfits worn by regular people taking regular trips, Fodor’s camped out at LaGuardia Airport (LGA), that humble hub in the middle of Queens that has been likened to a “bodega but for airports.” Turns out LGA was full of voguish voyagers this most recent holiday season who could easily go from jetway to runway.

Here are some of the flyest looks we found in Terminal B.

It was not much of a surprise to find out that Clay Lute, an 18-year-old heading home to Atlanta for the holidays, was a fashion student and stylist. 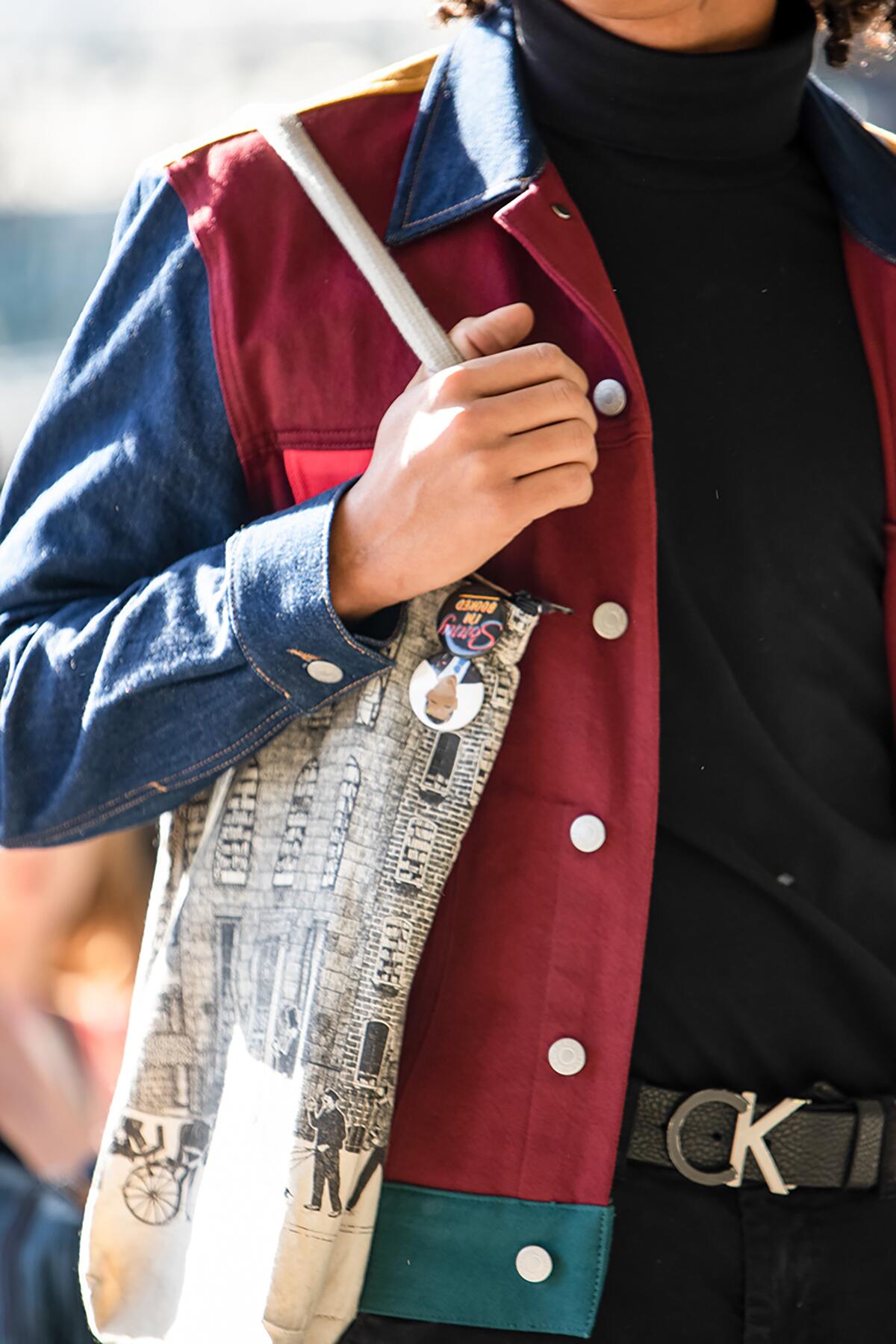 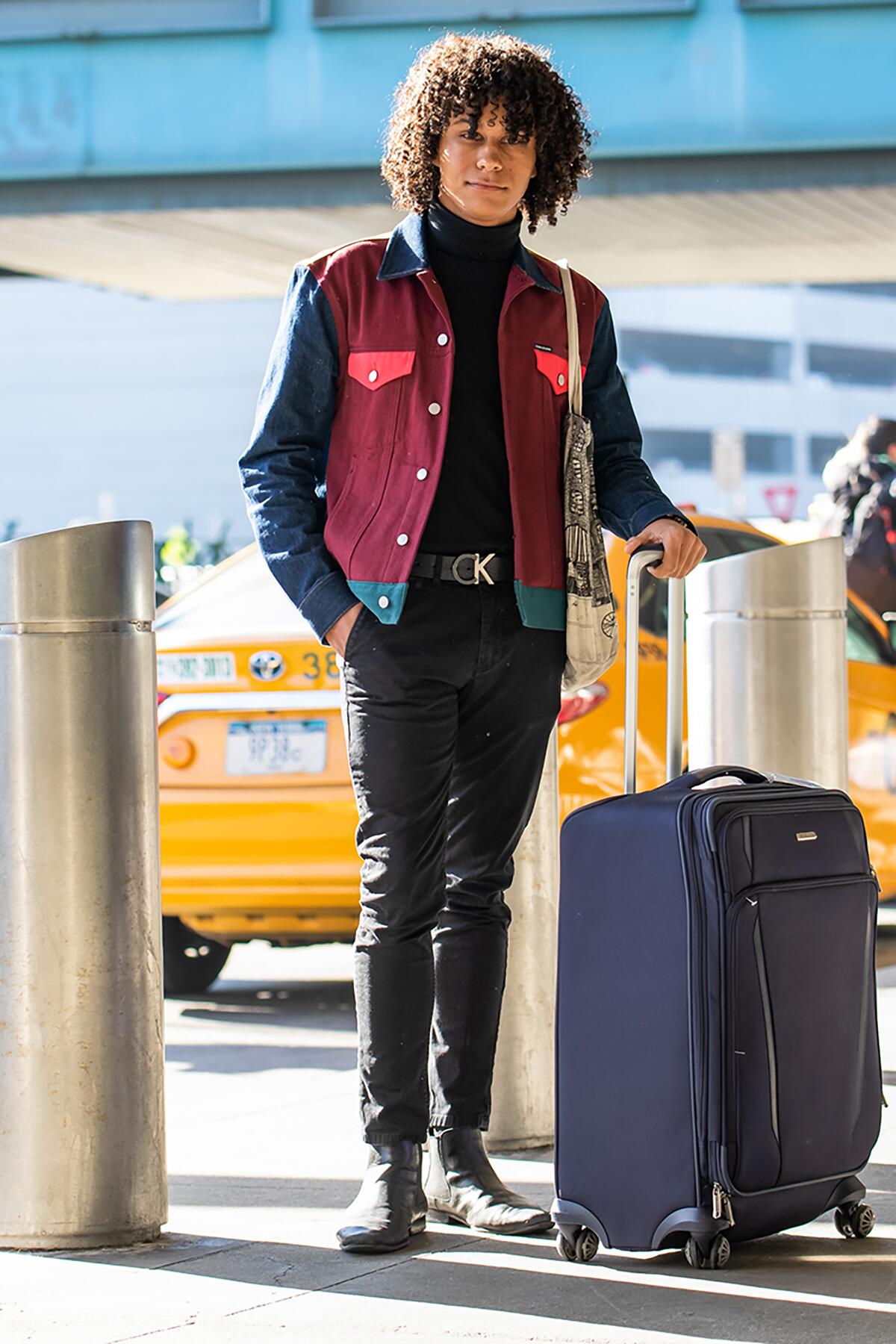 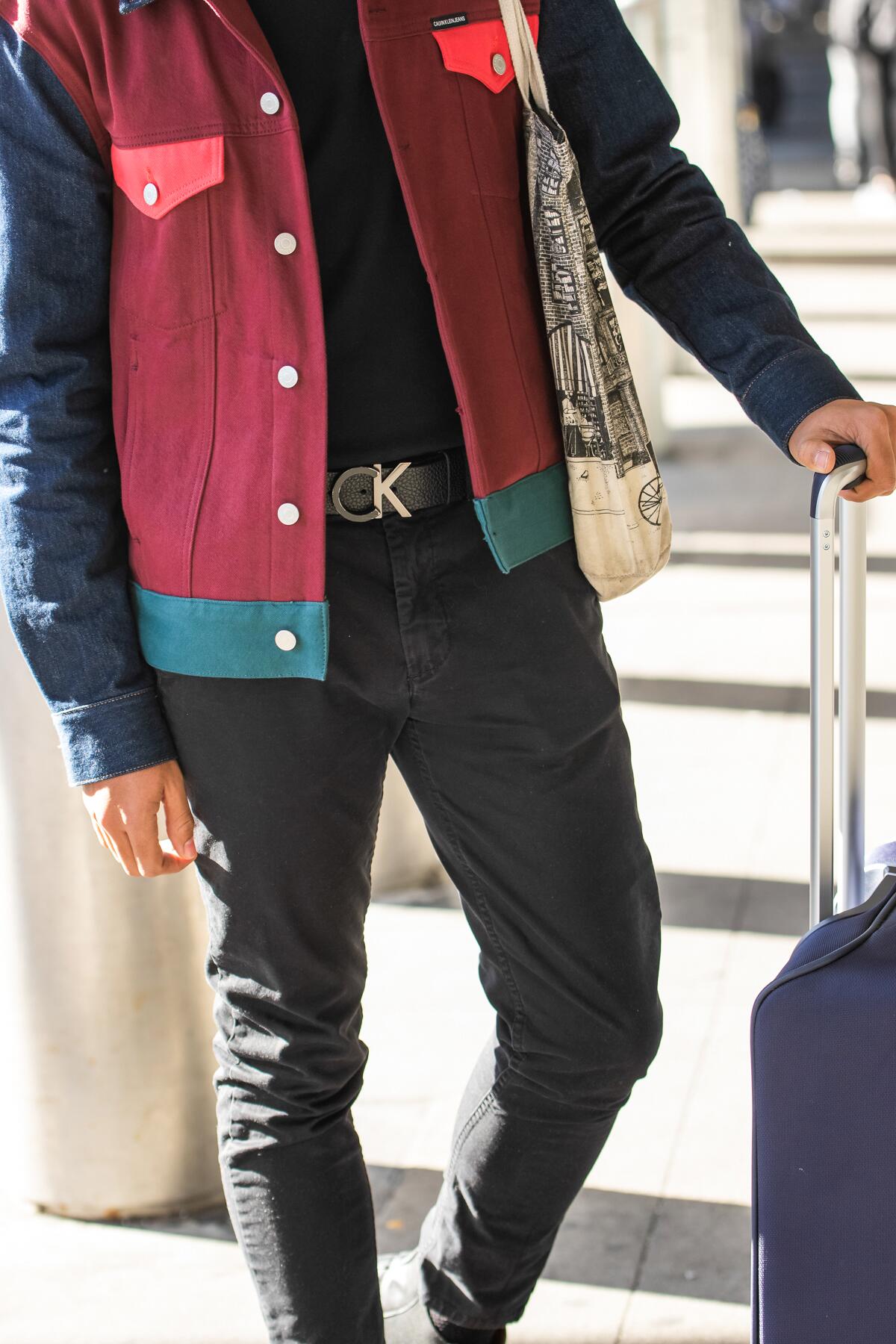 “I love the expression that fashion allows because you can unfold your narrative through what you choose to wear,” explained Lute, who lives in Harlem. “You walk into a room and your clothes introduce you before you even have a chance to introduce yourself.”

His airplane apparel, a head-to-toe black uniform of Zara and Uniqlo topped off with a color-blocked Calvin Klein denim jacket, perfectly embodied his travel style philosophy. “I want to be comfortable, [but] you never know who you’re going to sit down next to so you don’t want to look sloppy,” he said. “You want to look put together but not like you’re trying too hard. “

The trip back home to Ohio was Daniil Gelivera’s first since he dropped out of college there to move to NYC to pursue his dream to be a model and an actor. The 23-year-old had been studying business management when he had an abrupt epiphany. “I was like, ‘I have to get out of here,’” Gelivera said. “I packed up everything and moved to New York. I was scared, but I’m grateful I did it.” 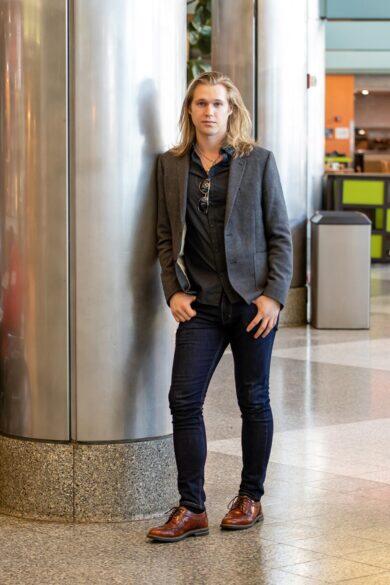 Being among so many other people who left what they knew to pursue their ambitions made him better understand his mother, a Russian émigré. “I can now comprehend the sacrifices she made when she left Russia to come to America with me when I was little,” he said. “She moved to a whole different continent. I only moved to a different city.”

Gelivera, who was flying back to see his mom and grandmother, said his style is heavily influenced by the polished but edgy aesthetic of British fashion. “I like to appear as professional as I can be because I value who I am and I would like others to value who I am as well,” he said.

But the actor also likes to mix in a bit of the celeb vibe when he travels, conjuring the 1990s layered looks of such heartthrobs as Johnny Depp. His flight outfit was a combo of fast fashion and basics—H&M shirt, ASOS jacket and shoes, and Levi’s jeans. His long hair is thanks to Brad Pitt, who sported long golden locks in the 2004 movie, Troy—“I was like, I want to look like that guy.”

Now living in the Bedford-Stuyvesant neighborhood of Brooklyn with three roommates, Gelivera, who waits tables while taking acting classes, said the hardest thing about his new life in the big city is “finding how to be okay with being lonely.”

After scoring a last-minute gig to tour Germany with a classical orchestra, musician Kyra Sims threw her French horn on her back and headed to the airport for a quick stopover in Memphis, Tennessee, to see her family before flying abroad.

Simms, a member of the New York Neo-Futurists theater company who describes her style as “functional and a little rock-and-roll,” alighted to LaGuardia in a fun outfit—flowy hippie skirt, snow boots with cleats, mustard knit satin-lined cap topped with headphones, and a sash pocketbook that was a creative project she backed on Kickstarter. 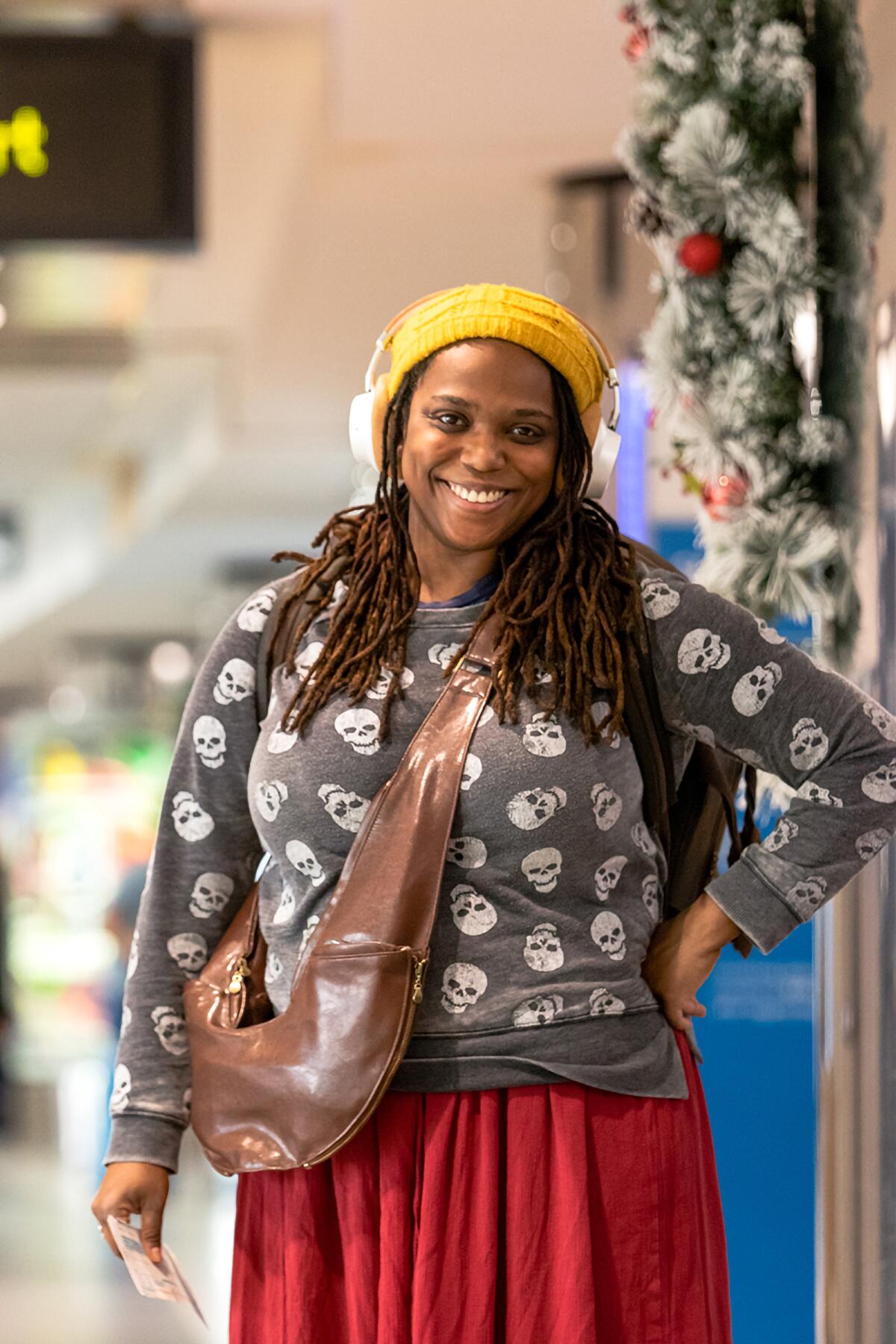 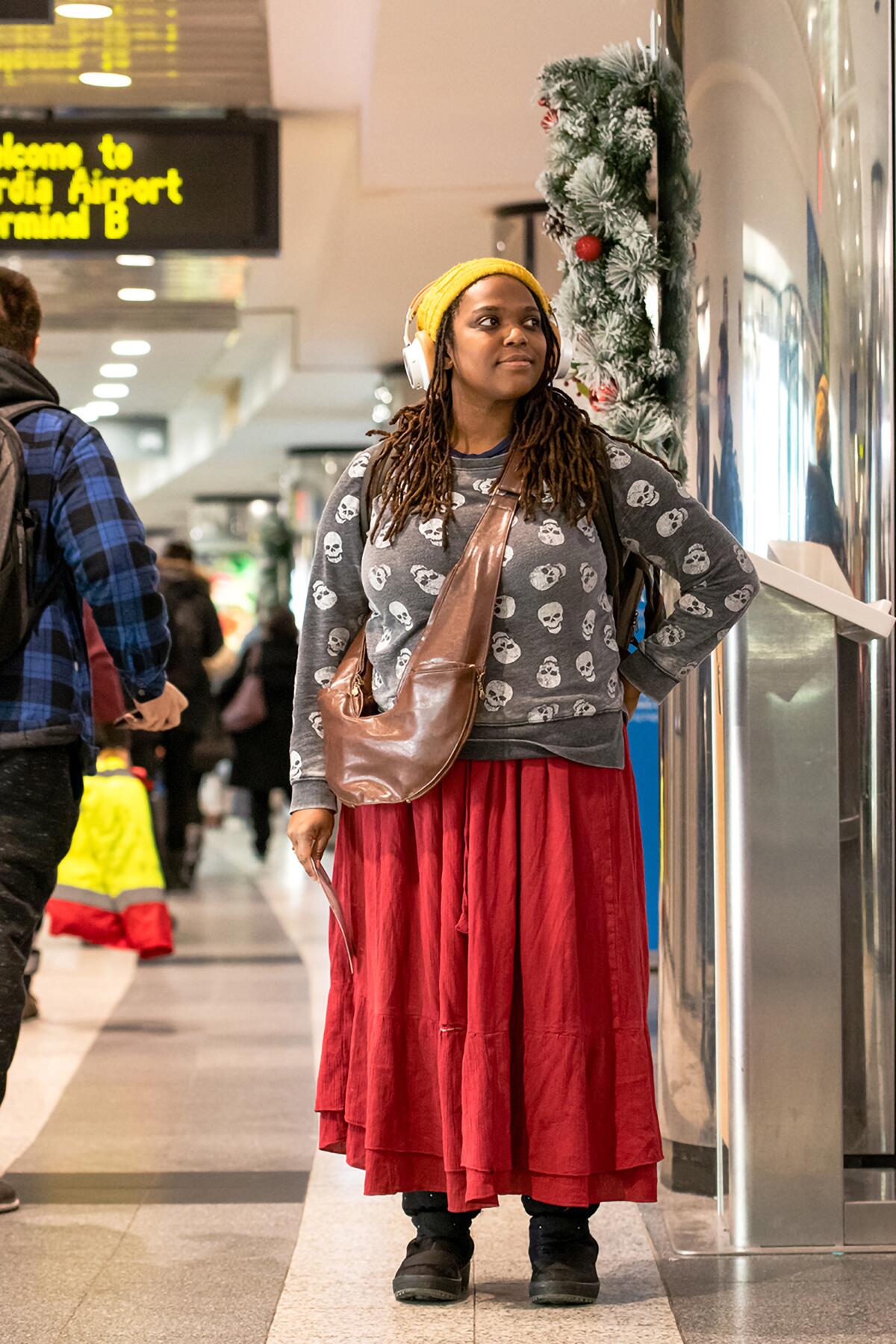 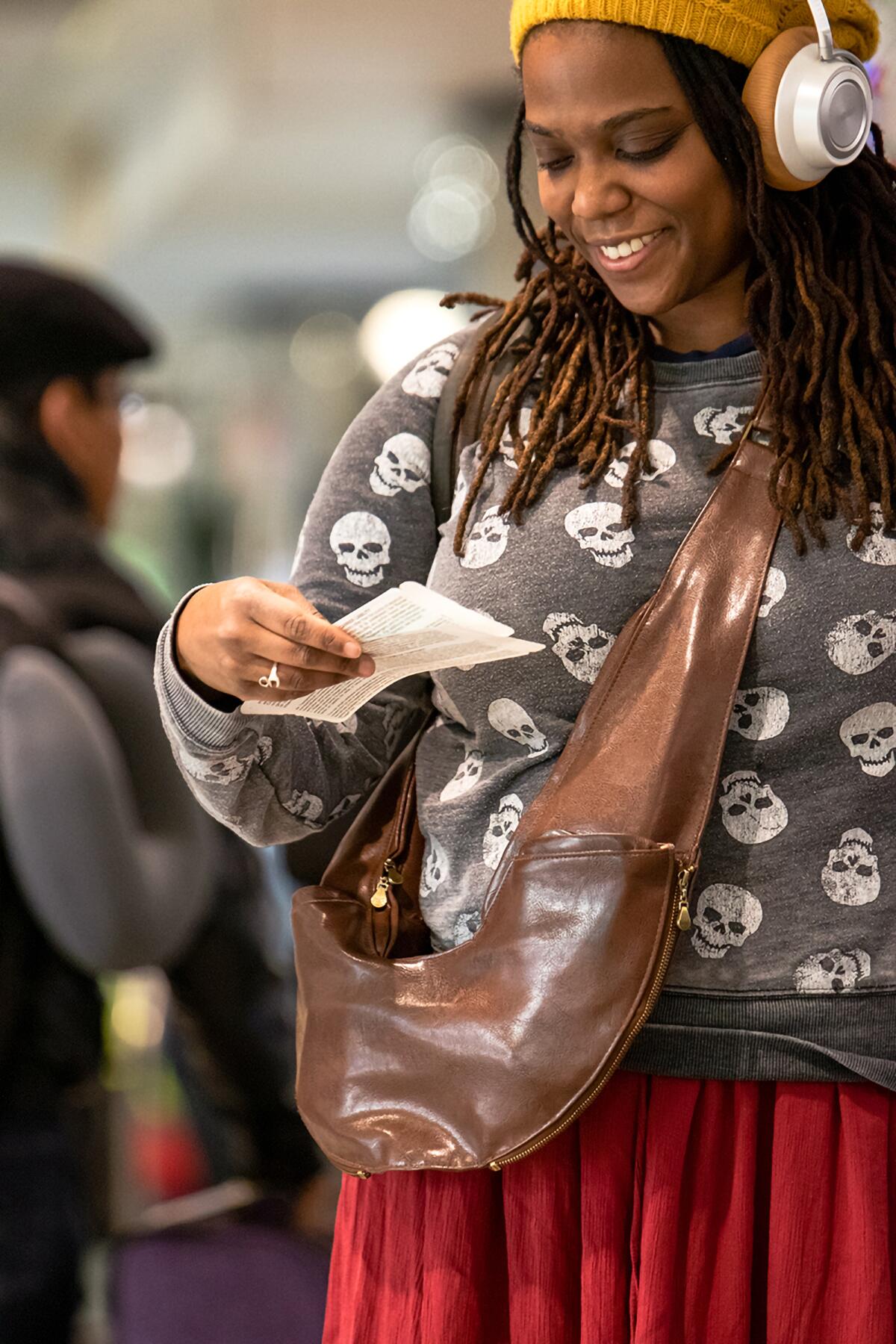 The skull sweatshirt from Target is one of her favorite travel pieces. “I really like skulls,” the 33-year-old Washington Heights resident said. “I think they’re cute. I even have a skull tattoo.”

Sims said she never boards a flight without her Infinity Travel Pillow and her Boltune noise-canceling headphones. When asked what she had been listening to on repeat as of late, the musician cited indie-rock singer-songwriter Mitski, Brooklyn progressive pop band Landlady, and R&B emo crooner Frank Ocean.

Although she was headed to balmy Miami, Upper East Sider Lucy Rozencwaig declined to leave behind her fur vest. “I got it two years ago in Alaska,” the 75-year-old said. “I passed by it in a window and my husband said, ‘You have to have it.’” 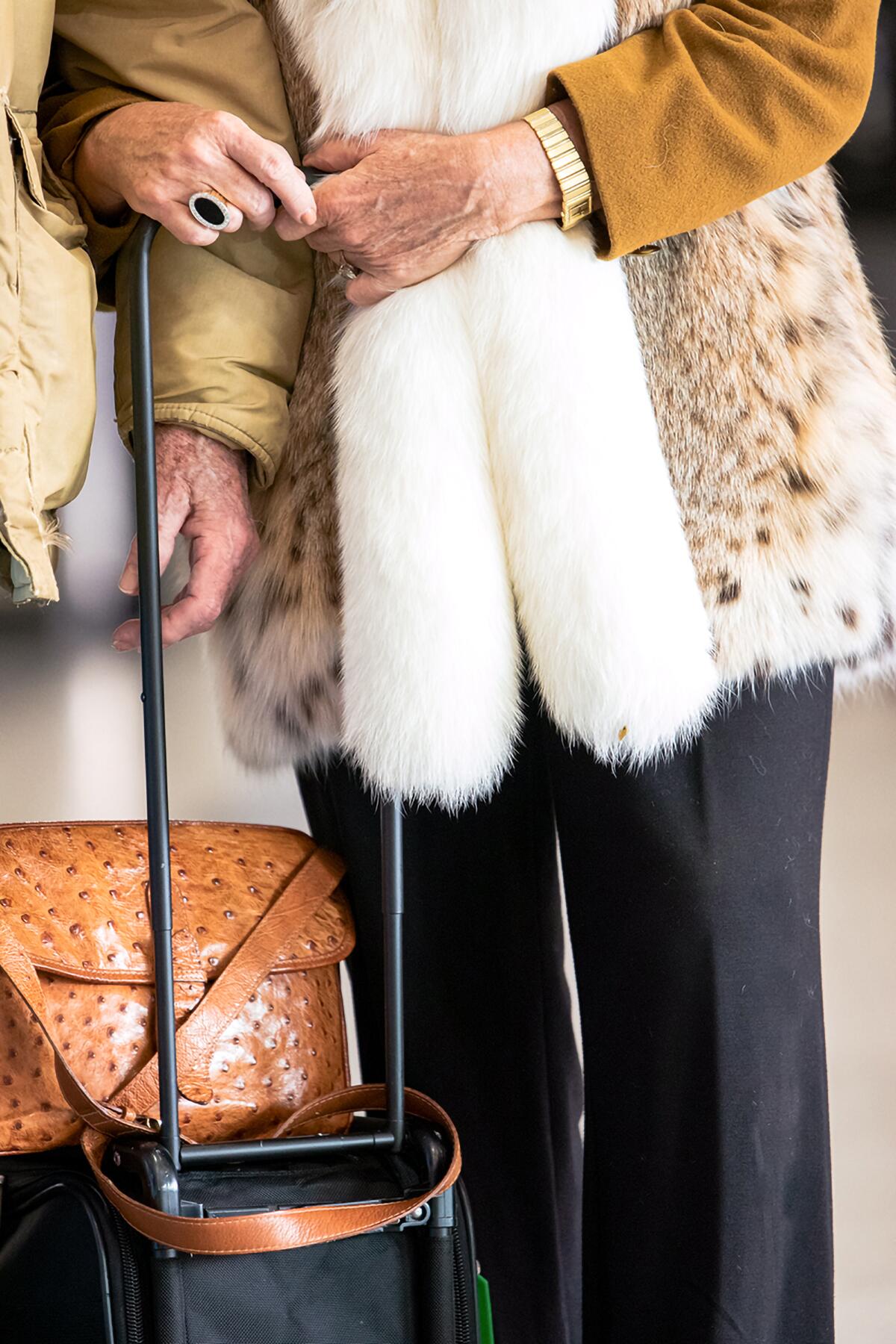 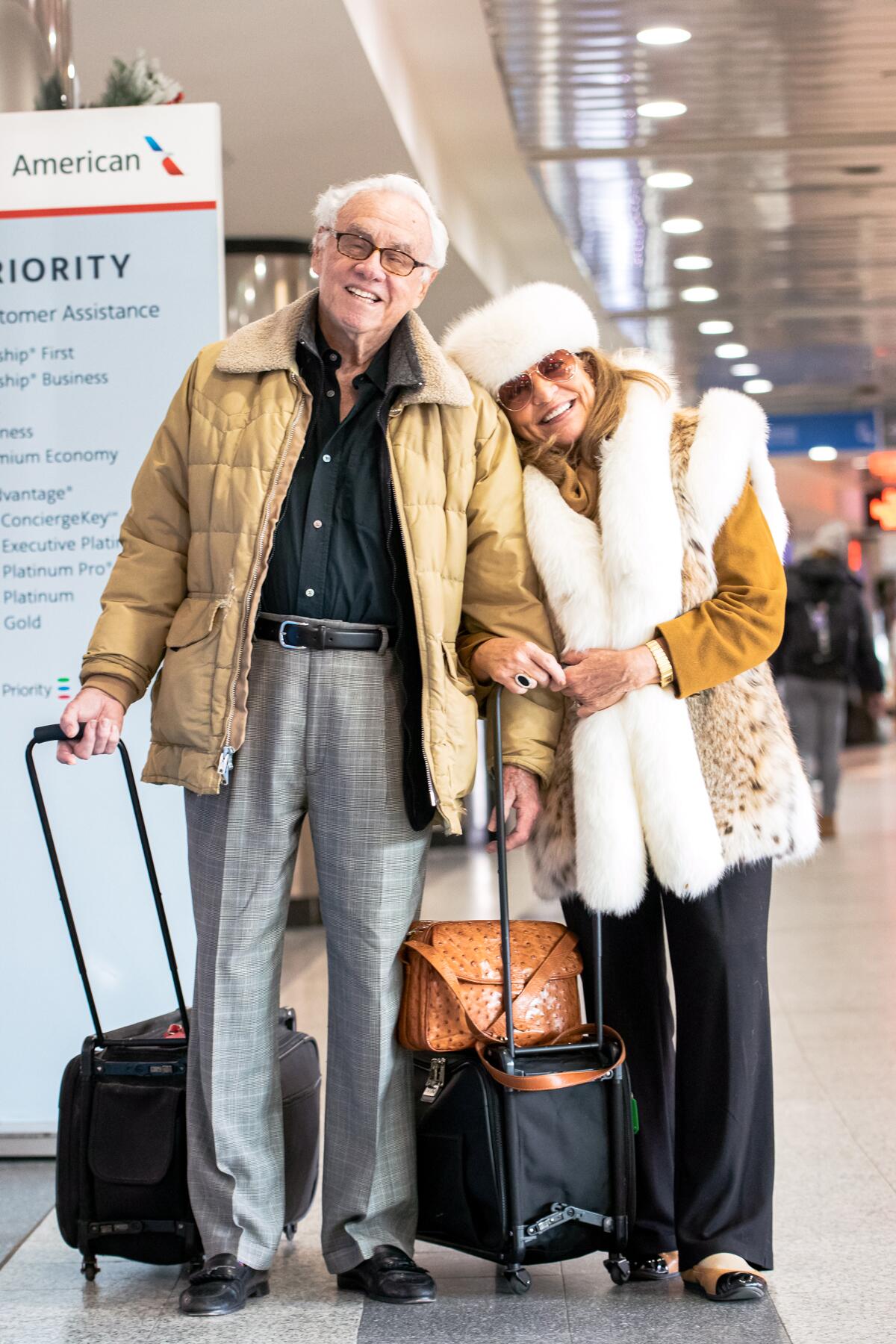 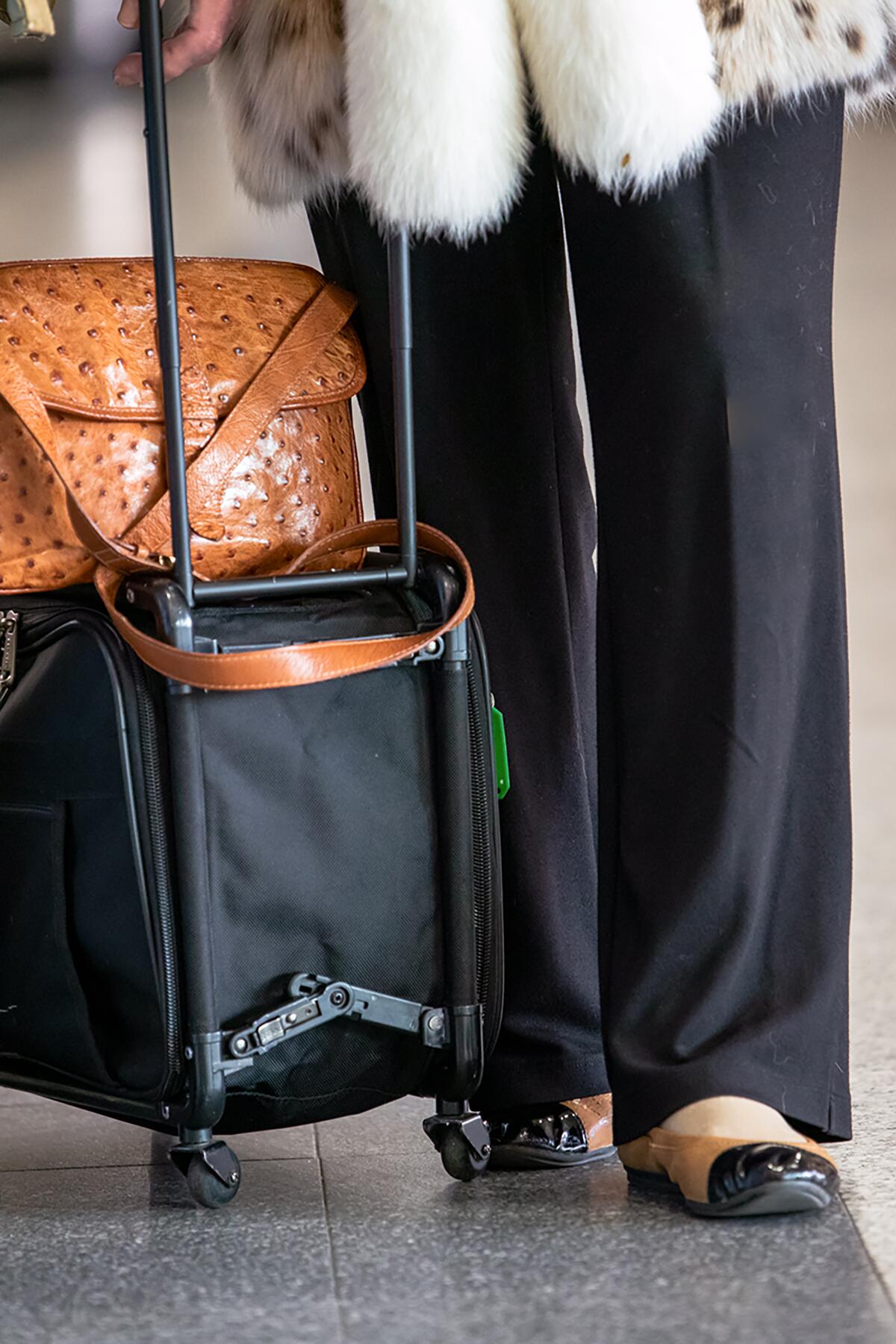 When asked why she was lugging a fur coat and hat to Florida, she shot back with a smirk, “We have to come back, don’t we?”

The grandmother of seven explained, “I have a little portable bag I use to roll it up in for the plane. It’s a whole travel system. Everything I am wearing under it is vintage and lightweight. At my age, I need to layer a lot.”

Rozencwaig’s hubby, Lorenzo, said the two met in Cuba and have been married for 58 years. “She was the most beautiful girl in Cuba,” he said.

Zach Oleson caught our eye as he checked in for a flight to his hometown of Traverse City, Michigan. The 32-year-old coordinated his hair to match his cider-hued pants, boots, and saddlebag. While he is not afraid to wear bright colors, the Brooklyn resident said he often opts for muted earth tones to match his ginger hair and green eyes. 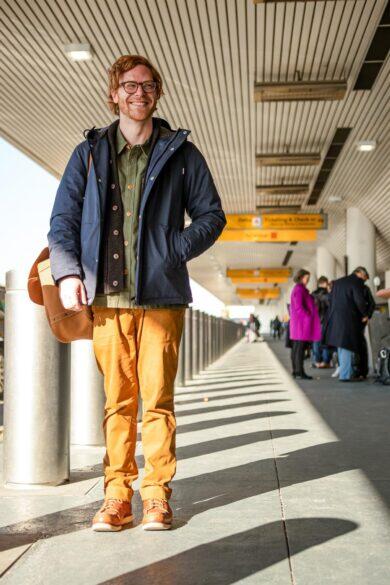 However, the high school English teacher could only take partial credit for his dapper but laid-back look. Josh Goldstein, his boyfriend who was traveling home with him for the holidays, interjected: “That’s my shirt and sweater and I bought him the pants and boots.”

“That’s one benefit of being a same-sex couple,” Oleson said. “You double your closet.”

While their style is low-key hip and laid back, the pair (who are currently obsessed with the American sportswear brand, Corridor) agreed that many travelers have gotten a little too carried away with the casual look.

“I can’t stand all the sweatpants. You’re in public. The airport is the most public place,” Oleson said, adding the need to be comfortable is not a valid justification for sweats. “What’s wrong with jeans? Jeans are comfortable.”