Arpana Rayamajhi exists somewhere between the modern and the ancient.

“I like to see the best in both and draw inspiration and understanding from the past while being relevant in the present and future,” she says. Originally from Nepal, the jewelry designer permanently made New York City her home in 2012 after attending Cooper Union School of Art. Today, she makes bold, bright, and sometimes macabre accessories inspired by both the traditional culture of her native country and the pop culture of present-day.

To Rayamajhi, both New York and Nepal are “home” in different ways. “NYC is home, like Nepal. In some ways, creatively and in terms of freedom as a woman, Nepal was never really home. But in terms of culture, family, and community, it was. I am lucky to say that these two places give me two very different things and complete a larger picture,” she says.

Rayamajhi is the subject of The Colors of Home, a short film that’s part of Lufthansa airlines’ #inspiredby HEIMWEH series (heimweh is a German term meaning “homesick”). The video series examines themes of home, belonging, and identity through the lens of artists all over the world.

Rayamajhi tells us about the true colors of Nepal, where to get the best Nepali food, and how she went from “one crazy city to another.”

The Colors of Kathmandu

There is one color that would make me so happy every time I saw it as a child: In spring, this tree called Jacaranda flowers, and the entire tree is violet/lavender. The city looks a bit more colorful because of these trees. I wish Kathmandu would take nature a bit more seriously and start planting them everywhere. I guess violet is the color of Kathmandu, although mix in a little red to signify life, blood, and womanhood, and then you have the most beautiful combination. Can I throw in a little yellow in there to balance out the palette this question just formed in my mind? I can also throw a touch of black and white in there, just two dots, to symbolize the duality the city holds.

Where to Find Peace in Busy Cities

Home was always the place. However, if you are to go out in midday sometime between 12-3 pm, despite it being the middle of the day, Basantapur Durbar Square was always a bit more relaxed. I think it’s because they don’t allow cars to go in the square; I can actually feel the way the sunlight would hit the temples and how a film of warm yellow would take over the square.

In Nepal, we believe that gods and goddesses can come in any form, and we are always waiting for people to come by and spend some time with us.

When I was growing up, Kathmandu wasn’t so crazy. It was humble, quaint and relaxed. Now it feels the pressure to be like everywhere else, overdosed with transient infrastructure, change of culture because of globalization (some good, some bad). And finding peace in NYC? [Laughs] Again, my home! One can always go upstate or even to the Cloisters to find some peace, but it is definitely recommended that if you can leave NYC every other weekend, or at least once a month if you can afford to, you should to get the madness out of your mind. This city is nuts. I can’t believe I went from one crazy city to another. Two completely different worlds, or maybe just two different versions of the same thing. 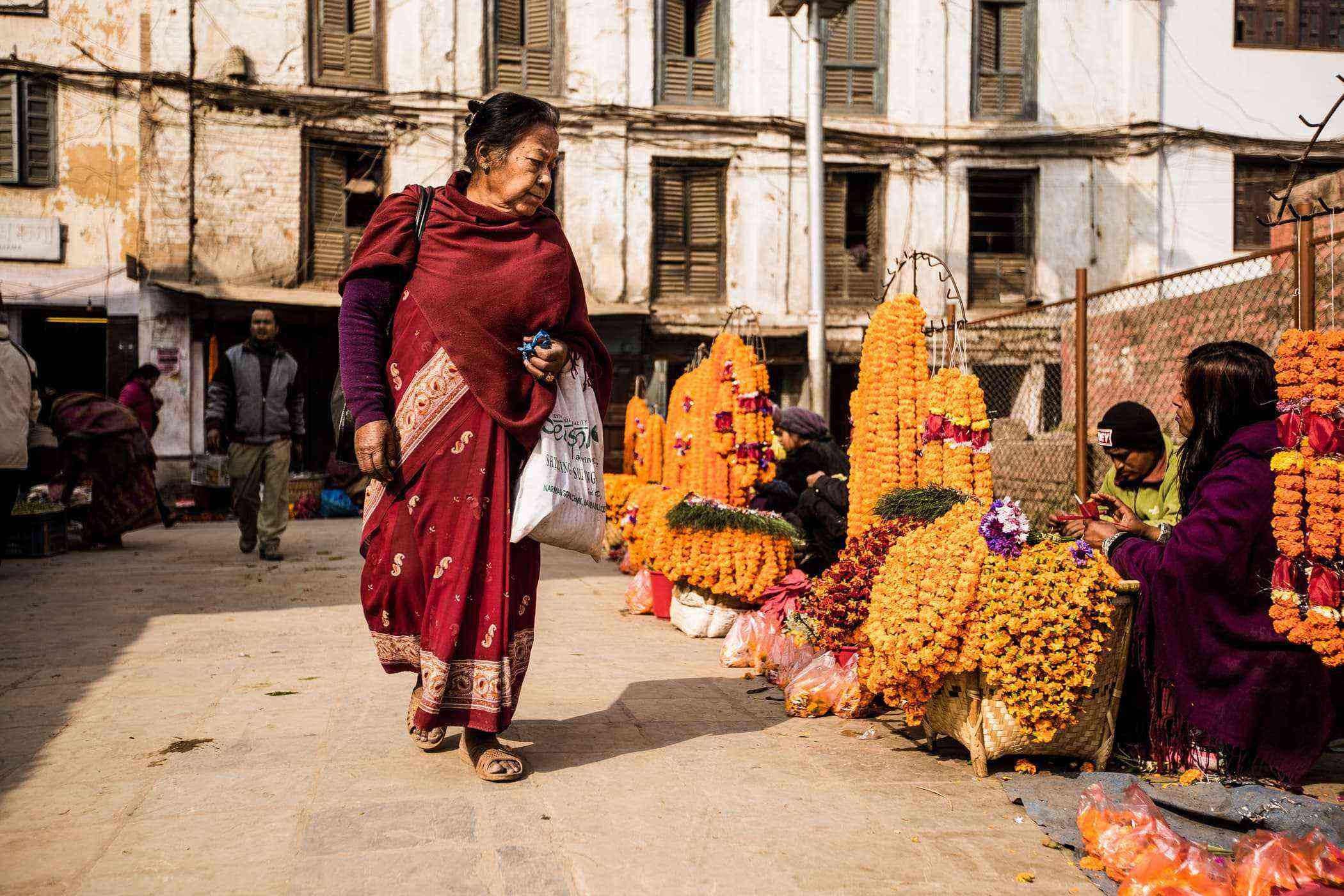 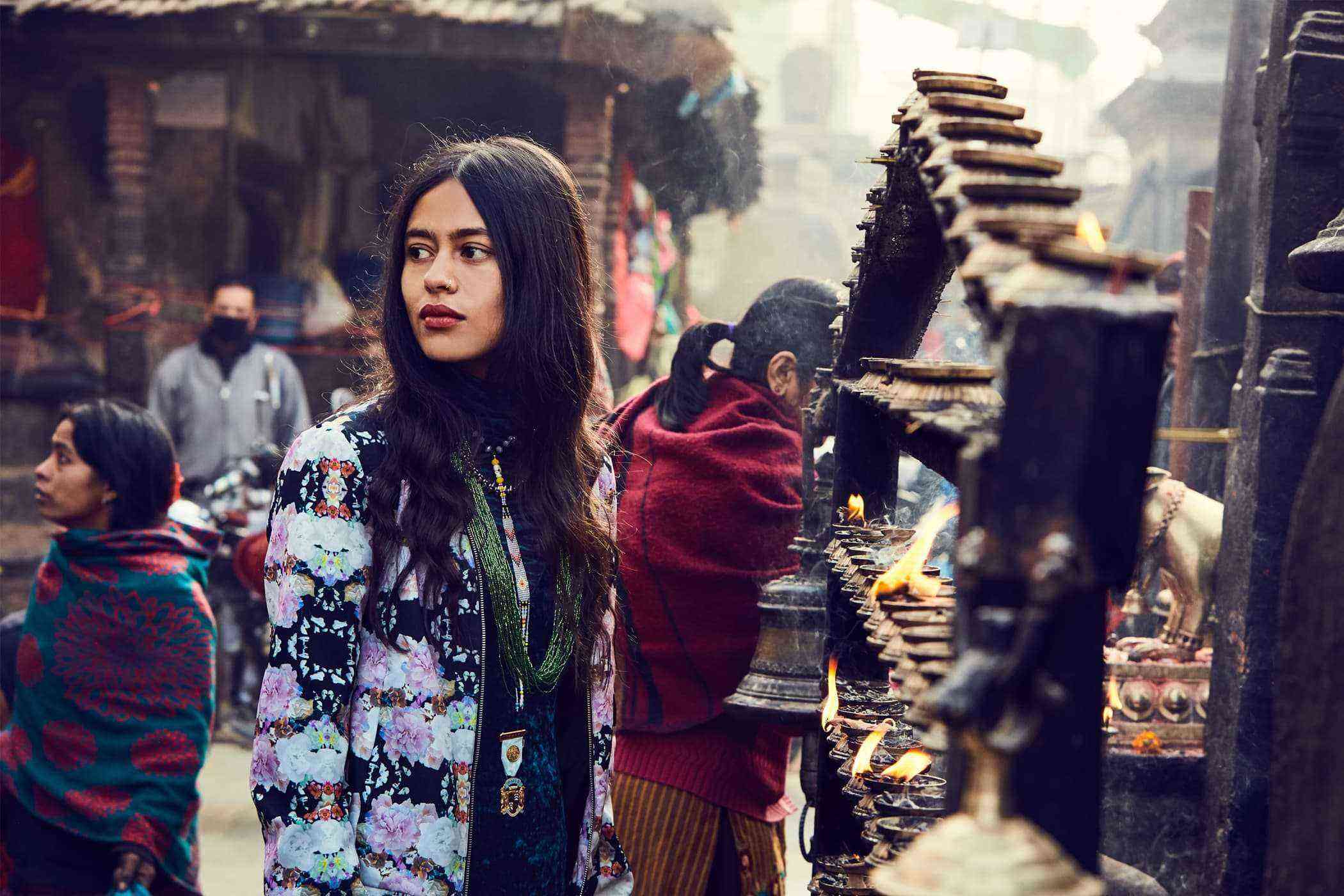 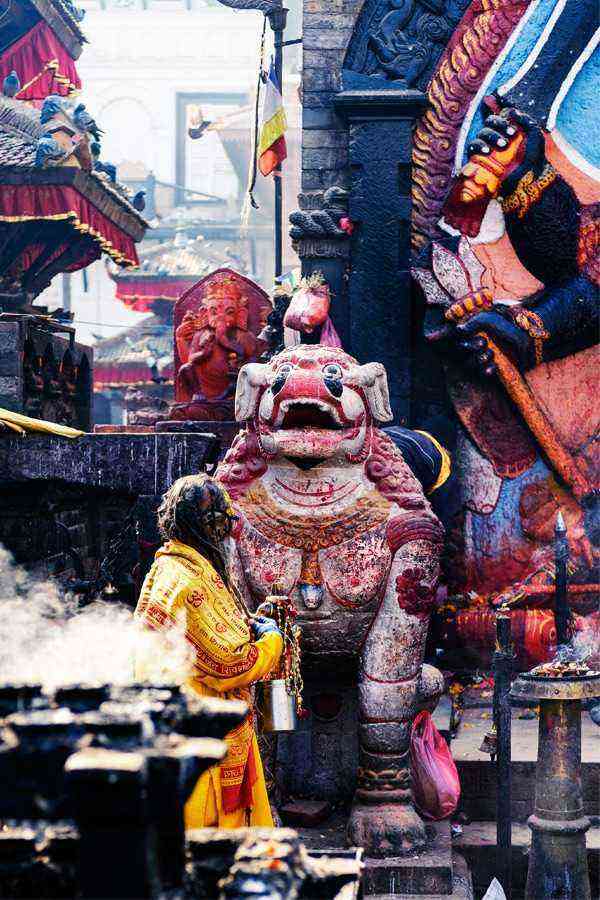 Advice for Visitors to Nepal

Be open. Be kind (because you will be in the presence of some of the nicest people in the world) and make sure to drink filtered water. Nepali tummies are strong because our air, our water, and our produce … everything is different. Eat Nepali food (it might get daunting after a while since it’s a new palette, but eat Nepali food), wear our clothes, and speak our language—that would be the highest form of respect. The most important thing everyone who visits Nepal [should do]: Share your stories and your travels with everyone you know. Atithi Devo Bhava (“the guest is equivalent to God”). In Nepal, we believe that gods and goddesses can come in any form, and we are always waiting for people to come by and spend some time with us. We have so much to offer and so much to give and we will happily make sure as much as we can that you feel like you have found your new home.

Harisiddhi Newari (hands-down the spiciest and best sukuti [dry meat] in the valley); bara [spiced lentil patties] from Nandini Food court; Honacha (a super popular family-owned restaurant); Tukuche (a more upscale concept of Thakali food). I also eat in a lot of small hole-in-the-wall places because even though these spots might look “grimy,” they have the fastest turnaround, and when they sell out, they sell out.

The staple food is daal, bhaat, tarkari (lentil soup, rice, and veggies), not always but occasionally accompanied by meats, pickles, and some condiments. There is not a single Nepali I know of that will give this up to eat something else [laughs].

Eat Newari food! [The Newar] are the most diverse and culturally rich ethnic group. They are the original inhabitants of the valley, and my theory is that because Kathmandu was so fertile, Newars had plenty to eat and were living really well, thus developing the arts and crafts, architecture, and cuisine in the valley. 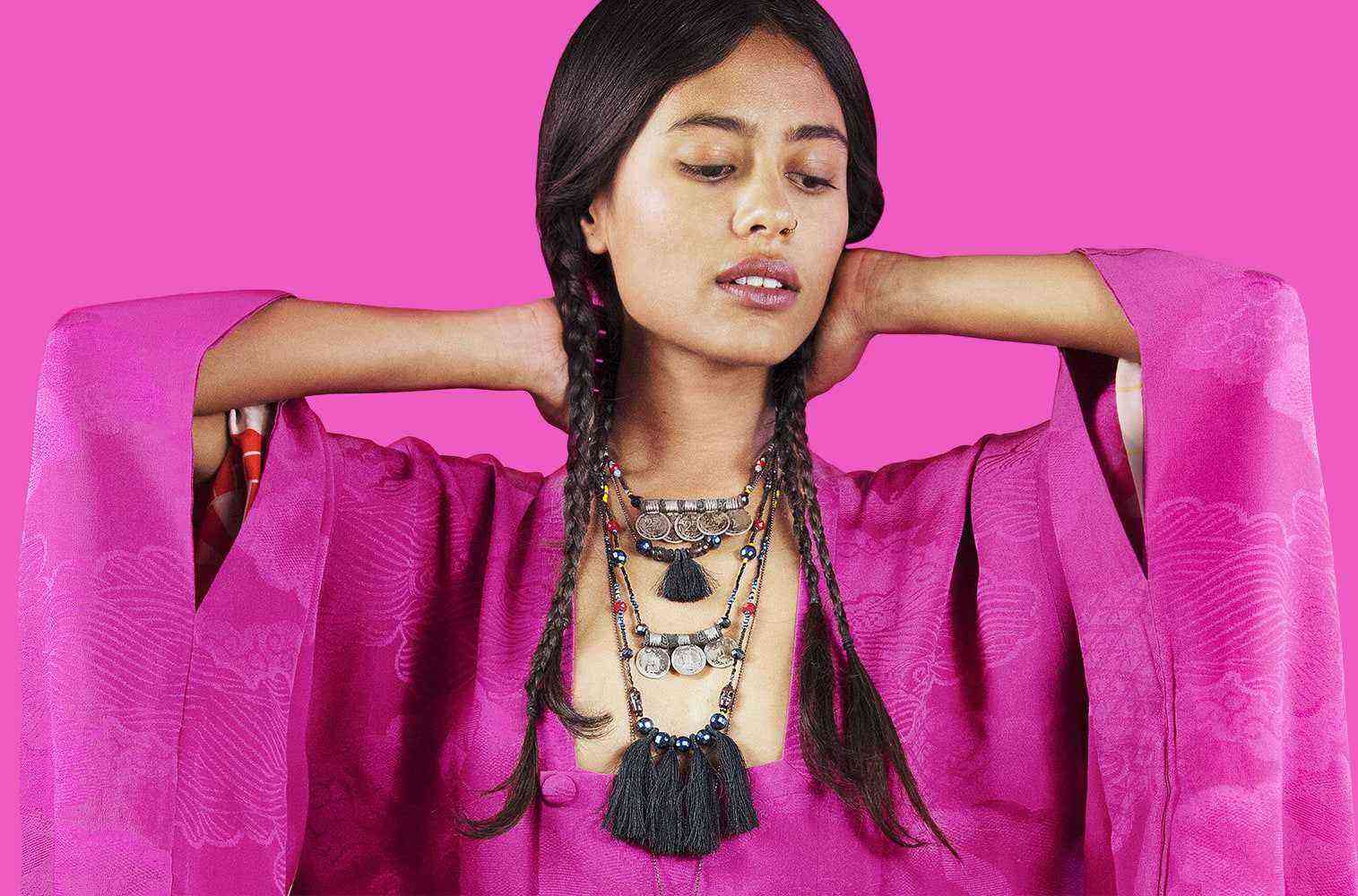 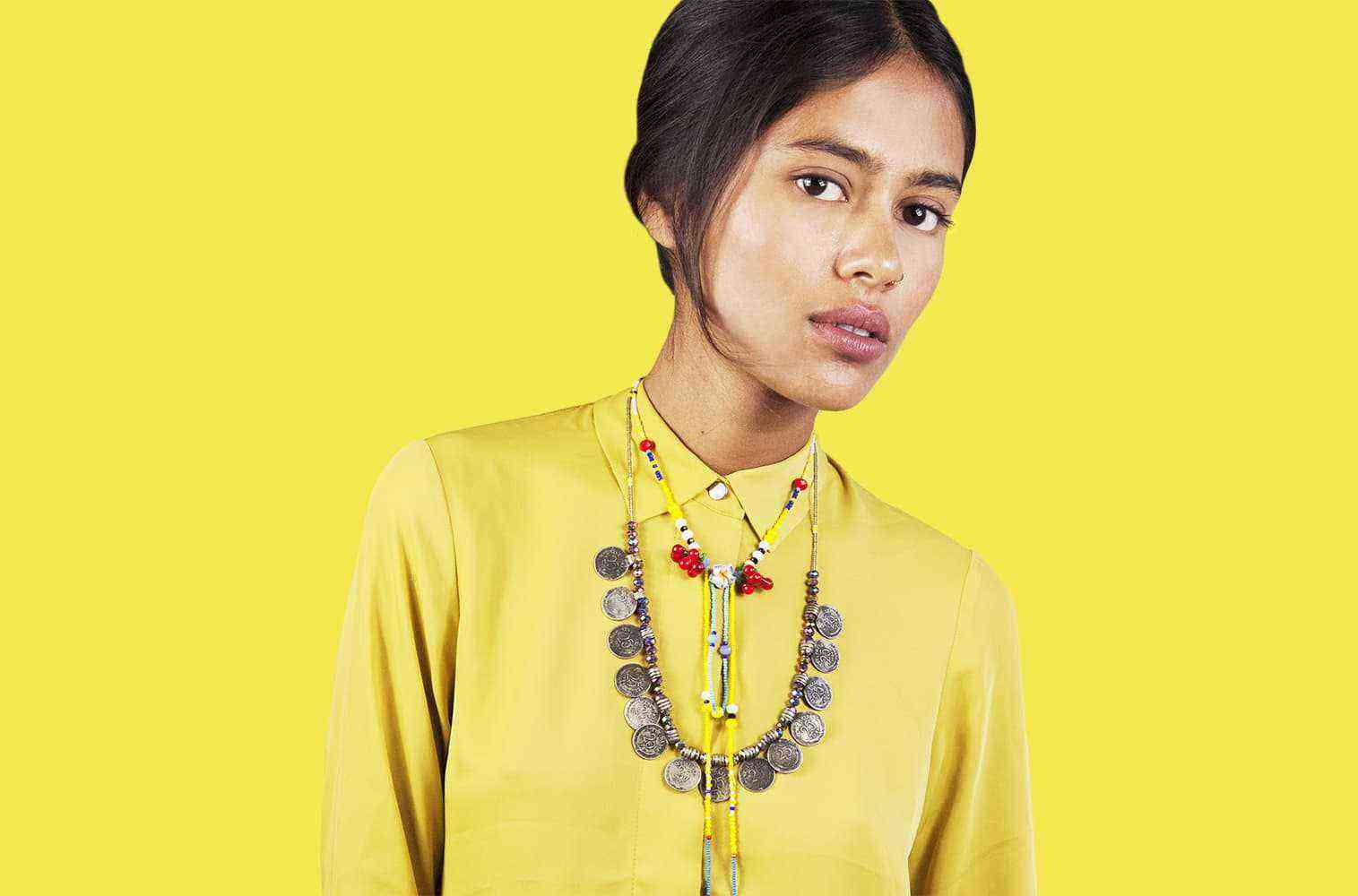 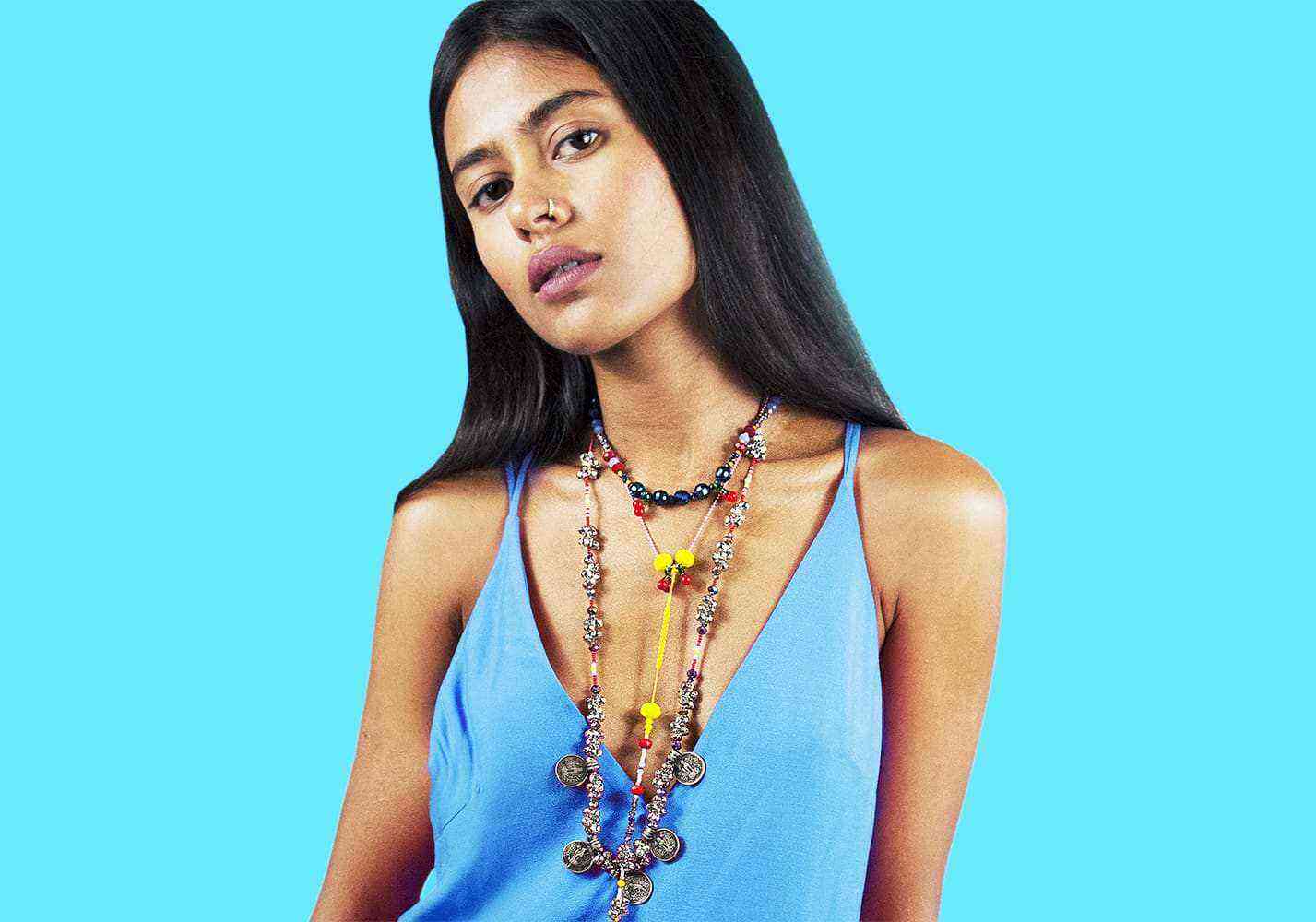 Often times, people associate the word “culture” with something that is old and bygone and rooted in history, but culture is always changing and it’s very complex. Because I am living in NYC and I am brown and have a specific look, I can be really exotic in the West. I do not have an issue with that at all, as much as I don’t want any particular idea of me being a fixed identity. I am an artist and I am always changing, so what I hope to show the world is that my jewelry might look rooted in history because our understanding of materials and history and culture is pretty limited, but I am of this time. I am of now. I can only be as culturally and historically appropriate as any of you living now and also a part of pop culture, of modernity. I am really somewhere in between.

Rock ‘n’ roll and death are bigger inspirations than anything else. The only genre of music that exists (for me) is rock ‘n’ roll [laughs]; death [inspires me] because two can argue how different they are from one another, and two can live two different lives—but nothing unites us more than death.

The  Masked Figure in The Colors of Home

The Lakhe (a symbolic demon in Newari culture) is sitting behind me and watching me as I bead my necklace. I cannot see him, and I am totally unaware of his presence. Do I not see him in the room because he is actually in my mind? Yet the figure seems to have a mind of its own, completely tranquil and peaceful and almost like a guardian angel who sits still, unlike the intoxicated dance Lakhes generally do during chariot festivals. How is this always wild Lakhe so tame in my home? And why? There is a sense of the Lakhe being home as well, and even though it’s a male figure, he’s an extension of me. I also sense two sides: the wild and the tamed. Both the Lakhe and I (if we are two separate entities) can find peace and happiness in duality.