Τhis dessert for the dead prepared for thousands of years in Greece symbolizes the best of life.

A dessert for the dead that’s all about life? What does that mean exactly? Well, it’s true! The deceased are remembered in Greece with a tray of kolyva—a rich mix of wheat, fruit, and nuts that symbolizes the gifts of life and is often an edible masterpiece. Taboo of death aside, it is also one of the healthiest treats around.

Dating back to ancient times, kolyva is prepared by the family of the deceased and offered in tiny bags complete with a spoon and napkin after the memorial service.

It takes several days, lots of effort, and patience to prepare this wheat-based sweet which is presented on silver trays with love and in honor of the departed.

But kolyva is not your simple mix of ingredients. Every single item has a special meaning dating back thousands of years.

Where Does Kolyva Come From?

The practice of making kolyva dates back to ancient Greece. A similar concoction called “panspermia,” which means “mixture of wheat seeds and nuts” was offered not only in memory of departed souls but also on occasions celebrating life such as marriage or harvest.

Made of wheat kernels, nuts, and pomegranate, the sweet was prepared and offered during fertility festivals, and particularly during the three-day Anthestiria festival held in Athens in honor of the god Dionysus, and also as a tribute to the cycle of life, death, and rebirth.

Spiritually speaking, kolyva symbolizes our reconciliation with death and the idea that we too belong to the cycle of life as does the wheat seed, which “dies” before it bears a plant from which we harvest one of the planet’s basic staples.

The painstaking process of making kolyva from start to finish and the ingredients all have special meanings and symbolism.

It takes at least two days to boil, cook, drain, dry, mix, and decorate kolyva.  On some Greek islands or villages, the wheat kernels are even taken to church to be blessed before preparation. However, these long hours spent in loving dedication to the memory of the departed loved one also have a healing effect serving as a sort of meditation and creating inner peace and acceptance.

So what do the kolyva ingredients mean? 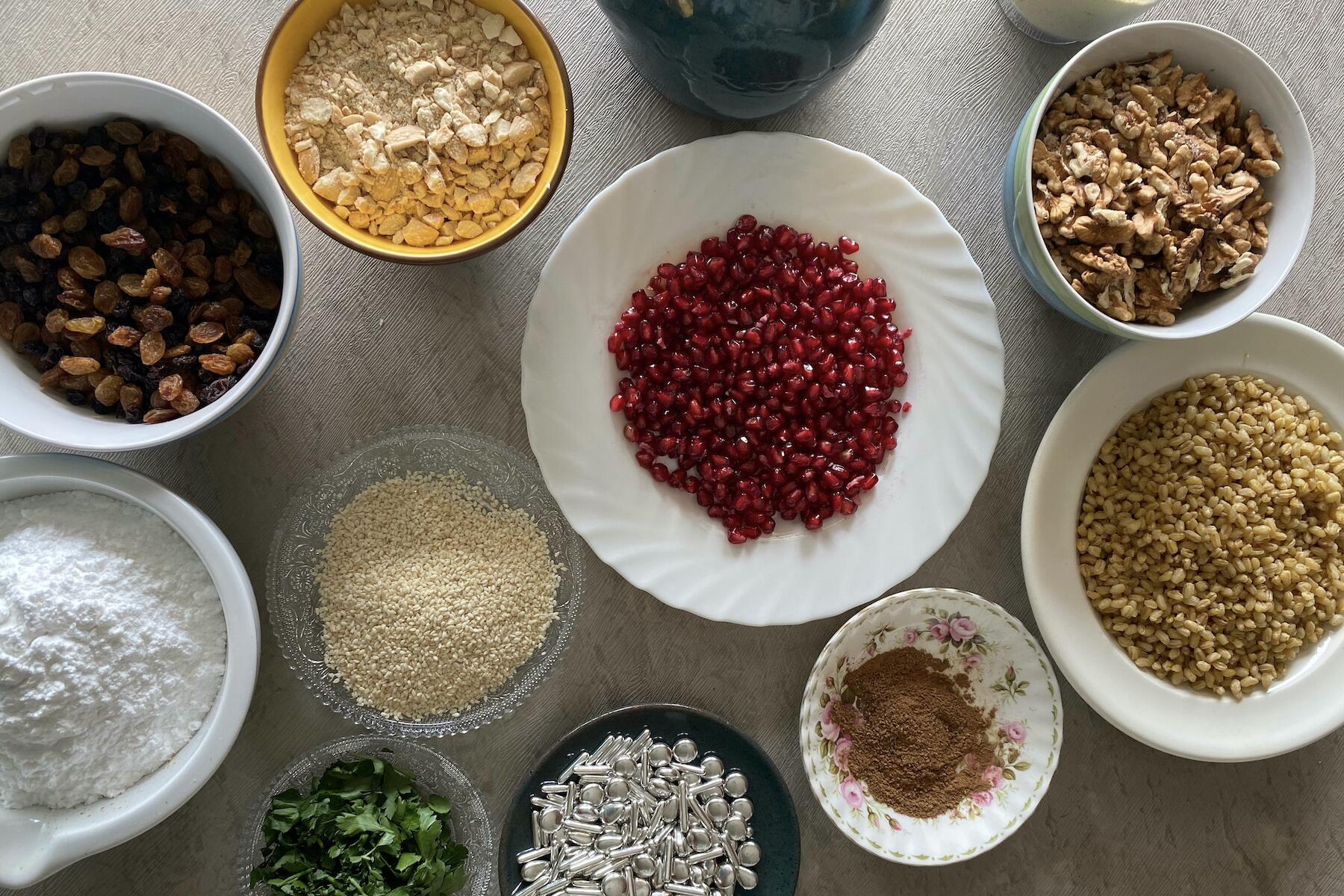 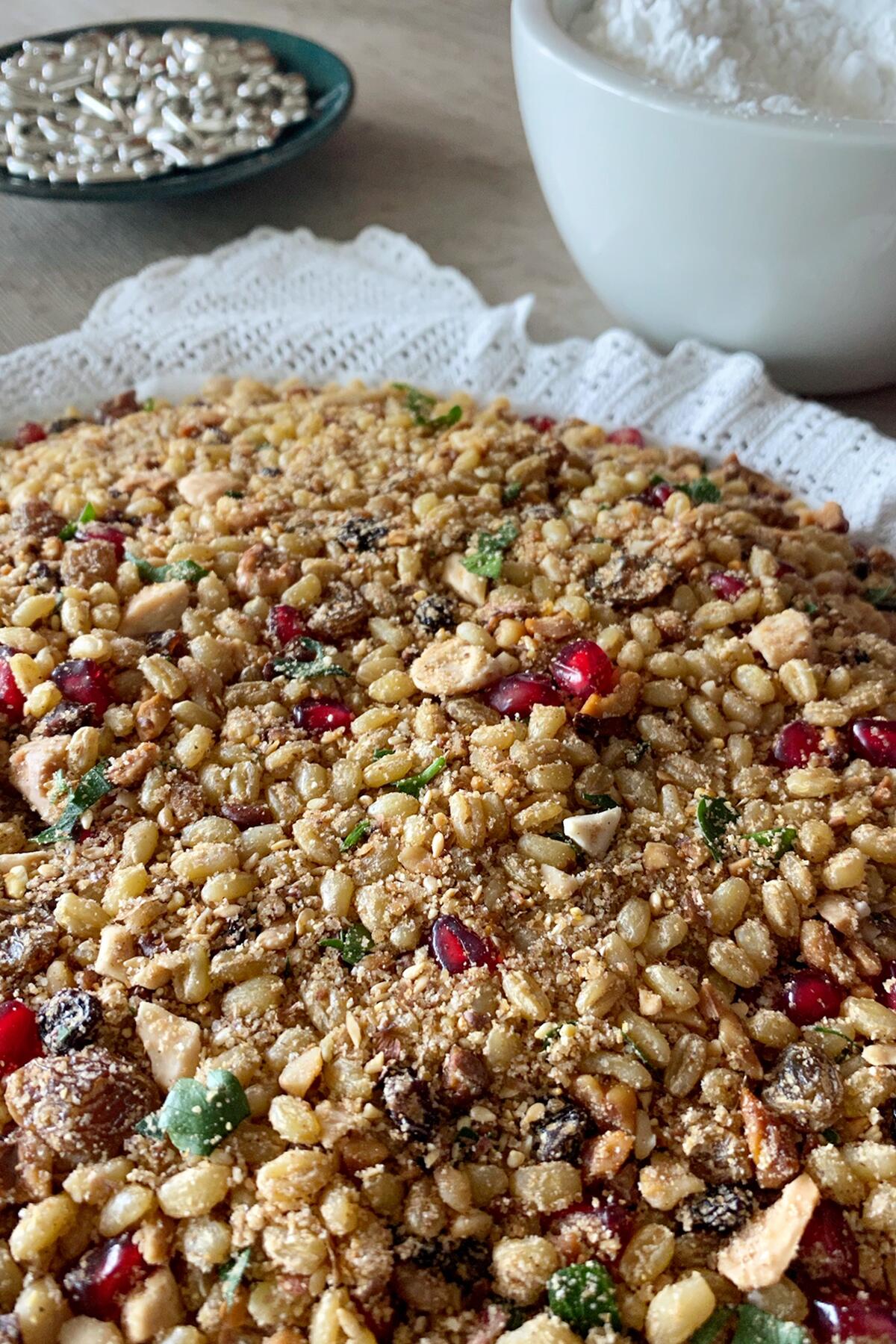 Starting with the wheat, as a basic staple representing the earth, it also signifies the body and the souls of the dead. As mentioned in The First Epistle (letter) to the Corinthians by Apostle Paul: a grain of wheat must fall to the ground and die before it returns to bear life. And this metaphorically applies to human life too which is, according to the Orthodox Church, a cycle of death, resurrection, and eternal life.

The nuts—sesame seeds and walnuts—represent fertility and the reproduction of life.

The whitened almonds—the color of our bones—symbolize our common fate.

The spices—cinnamon, nutmeg, and cumin—represent the richness and aromas of a life well-lived.

The parsley or mint: a wish for a peaceful rest. The service actually speaks of “eternal rest in a place of light, richness, freshness; where there is no pain, no sorrow, and no sadness.”

The raisins date back to the time of ancient Greek god Dionysus, the god of wine, through to the time of Christ, representing the sweetness of life and Christ’s blood.

Bread crumbs or chickpea flour denote the lightness of the soil.

The pomegranate embodies the brilliance and wealth of the afterlife. It is after all with a pomegranate that Hades, the god of the dead, enticed Persephone, the goddess of spring, to the underworld where she became his wife.

And finally, the sugar signifies the sweet welcome into paradise.

According to Greek tradition, the basic ingredients for kolyva should be nine, representing the Nine Ranks of Angels who watch over us.

In other words: This dessert for the dead prepared for thousands of years in Greece symbolizes the best of life.

When one passes away in Greece, it is expected of the family to make the kolyva at home. This was very much the case in the past. Today there are pastry shops specializing in kolyva, but in the Greek mountain and island villages, they are still homemade.

Like many Greek food-related customs, the kolyva platter would (and still does) reflect the skills and talents of the housewife, as did the traditional celebratory breads. It was considered a great compliment to be known for your kolyva and housewives took great pride in their handiworks. This still applies today and has been extended to men, who also do a lot of kitchen work.

The secret of success was in the taste, the dryness of the wheat (the main secret to perfect kolyva), and of course, the artwork.

The more the deceased was respected in life, the more intricate the artistry of the kolyva tray. Some are complete masterworks, with intricate designs similar to lace. Today, there are dozens of ready-made patterns, materials, and even stencils on sale at special hobby-style shops.

Monks at Greek Orthodox monasteries also create kolyva masterpieces when a bishop “falls into sleep”—a term used to describe death ahead of resurrection and eternal life.

Saturday of the Souls

Besides being prepared for individual memorial services, kolyva trays are also made twice a year dedicated to people who passed away and their families were unable to offer services for them then—usually sailors, immigrants, or due to poverty. These days are known as “Psycho Savvata” or “Saturdays of the Souls” and fall during Greek carnival season ahead of Easter.

Similar to Mexico’s Dia de los Muertos, on these two days trays accompanied by a piece of paper with the name of the deceased to be “read” (or mentioned by name) by the priest during the service are taken to church. There, on long tables, you will see everything from plain bowls of mixed or sugar-coated kolyva to elaborate creations with the initials of the departed, flowers, cypress trees, angels, and of course, the cross made of silver candies. Lit candles are placed in the center when the priest mentions the names of the departed during the special service. Once the sermon is over, the sweets are distributed as a sign of love, remembrance, and sharing.

Though kolyva has been linked to death and loss, it is also one of the healthiest desserts in the Greek diet, even achieving superfood status.

Lately, kolyva has be reinvented and freed of its association with death. Instead, in Greece today you’re bound to find athletes, marathon runners, and cyclists eating the otherworldly dessert for breakfast which is—thanks to the wheat, nuts, raisins, and fruit—acts an energy-booster and is a rich source of protein, fiber, vitamins, and minerals. It’s also an ideal choice for vegans and vegetarians.

Besides its nutritional value, Greek kolyva is also absolutely delicious (and calorie-rich). If you can leave the taboo of death behind, you’re bound to stick to this incredible edible.