Legoland is coming to New York. Here’s what to expect.

There is a magical place in a secret location in Central Florida where most of the Lego Miniland models you see in the parks and stores are created. We got a sneak-peek tour of the facility (it was this Lego fan’s dream come true) and saw some of the models being created for the brand-new Legoland New York Resort’s Miniland.

On July 4, 2020, Legoland New York Resort (LLNY) will join the Legoland family as the third amusement park in the U.S.; there are also 12 Legoland Discovery Centers scattered around the country (with two more opening in San Jose and New Jersey in 2020) and numerous Legoland Resorts around the world.

Miniland is—as you probably guessed—a miniature recreation of popular locations around the USA (and the world), as well as a special miniature version of landmarks from the area the park is in. The New York location will have a whole area dedicated to the sights and sounds found all around New York State. We got a sneak peek behind the scenes to see what the Lego engineers are building for New York. Here are the coolest things you can expect to find when the park opens in 2020.

One of the key attractions at New York’s Miniland will be the 19-foot-tall Empire State Building in all its Art-Deco glory. Made of 97,680 bricks, the details are amazing and exact right down to the 102 floors, 6,500 windows, replica antennae, and the observation deck on the 86th floor. How will they get such a tall structure from Florida to New York, you may ask? In a very big truck.

INSIDER TIPIf the Lego structures are being shipped abroad, they are put on ships. This is the case for some of the buildings being sent to Gardaland Resort, an amusement park in northeastern Italy. The structures will be featured in the first Legoland Miniland to be located in a waterpark.

Coney Island Made out of Lego

It’s said that Coney Island is the birthplace of the amusement park, so it’s appropriate that this mini-version has a place of pride at this brand-new theme park. Four landmarks will represent Coney Island including the iconic Luna Park entrance on the unmistakable Coney Island boardwalk, the original Nathan’s Famous Hot Dogs, and the Wild River, Brooklyn Flyer, and Zenobio rides. No word yet if there will be mini-Mermaid Paraders or Polar Bear Plungers, but we can only hope. 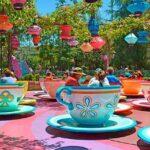 Spanning the East River and connecting the boroughs of Manhattan and Brooklyn, the Brooklyn Bridge is one of New York’s most beloved sights. A walk across the 1,595-foot span is on most locals and visitors’ “must-do” lists, which is why it’s the perfect addition to the New York Miniland. The Lego version is made with 91,908 bricks and spans 23 feet, and will have working street lights. It’s sure to be a popular destination with the Lego Minifigure population as well. 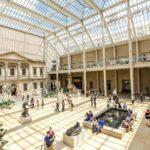 There’s a Lego Chrysler Building, Too

The New York skyline wouldn’t be complete without the Art Deco–style Chrysler Building. The 1,046-foot tall skyscraper has been shrunk down to almost 14 feet and it has a Lego version of the 185-foot spire, as well as the eagles on the 31st floor, and the eagle-headed gargoyles on the 61st floor. 59,052 Lego bricks were used to recreate the iconic structure. Fun fact: The actual Chrysler Building was built with nearly four million actual bricks that were all laid out by hand…kinda like its Lego counterpart.

LLNY’s Miniland Is the Exclusive Location of the Lego Oculus

Exclusive to Legoland New York, the three-foot-high Oculus is an homage to the building that now tops the transportation hub located in the World Trade Center complex. Created using more than 40,000 Lego bricks, the replica took Master Model Builders about 555 hours to complete. Accompanying the Oculus will be 4 World Trade Center, another exclusive addition to the LLNY Miniland. This Lego replica will also have the parallelogram shape from the 7th through 46th floors, and the trapezoid shape on the 48th through 63rd floors. Impressive is an understatement.

In addition to the Oculus, there are several other Lego structures that will be exclusive to LLNY including and Staten Island’s Snug Harbor. The Garden took about 600 hours to build and has more than 120,000 bricks; we’re still waiting to hear if the Knicks or the Rangers will be in residence. The Snug Harbor model features some of the area’s 19th-century buildings like the home of the Staten Island Museum and the Noble Maritime Collection. It took more than 450 hours to build Snug Harbor and around 80,000 bricks were used in the model. And yes, there will be a beautiful orange Staten Island Ferry present to take Minilanders between Manhattan and Staten Island.

St. Patrick’s Cathedral Gets the Lego Treatment Too

One of Manhattan’s most prominent landmarks is St. Patrick’s Cathedral, a Neo-Gothic-style Roman Catholic church that occupies a full city block on 5th Avenue in the heart of the city. While the original is made of Tuckahoe marble, which is found in southern New York state, the Lego version is made of 44,400 bricks and weighs 220 pounds. This replica will also have—recreated in Lego of course— the famous spires, the amazing rose and stained glass windows, the slate roof, and the imposing bronze doors.

INSIDER TIPTo determine the number of bricks used to create a structure, the building is weighed and the 1:20 scale is considered, but the equation itself is secret and sacred. What’s not accounted for in the brick count are the “easter eggs” that Model Builders include inside the Lego models such as the mouse inside the lion statue in front of the MGM Grand Hotel in Miniland Las Vegas.

Central Park also plays a major role in the new Miniland. In addition to the Central Park Zoo, there will be a statue of Hans Christian Andersen (no word yet if there will be little Lego Minilanders climbing all over it), the Bethesda Fountain, and Cleopatra’s Needle. The original obelisk, which is New York City’s oldest outdoor monument and Central Park’s oldest man-made object, can be found between the Great Lawn and the Metropolitan Museum of Art.

INSIDER TIPDepending on the size and details, it can take anywhere from 20 minutes to 700 hours to build a mini Lego replica. It took more than 700 hours to design and produce the Lego version of Central Park.

In addition to the major New York City landmarks like the Woolworth Building, which incorporates more than 70,000 Lego elements to capture the building’s likeness, there will be other quintessential New York scenes and vignettes sprinkled throughout. Keep your eyes peeled for Wall Street’s famous Charging Bull statue, a Times Square costumed character, and some tongue-in-cheek scenes like pigeons attacking a man and the Statue of Liberty with a hot dog.

The Rest of the U.S. Has Also Been Created With Lego

In addition to New York City Lego landmarks, there will be numerous other U.S. destinations featured in the new Miniland that will represent scenery and cities from coast to coast such as Washington D.C., New Orleans, Chicago, and San Francisco. In the Middle America cluster, there’s the house and the cornfield-ball field from the Kevin Costner movie, Field of Dreams. And, in the California section, there’s a replica of the iconic redwood tree that you can drive-through, as well as a statue of Simon Bolivar on horseback found at the west end of the United Nations Plaza in San Francisco, and the city’s Fisherman’s Wharf and the San Francisco Carousel found on Pier 39. The Lego version of the carousel will also feature famous San Francisco landmarks like the Golden Gate Bridge, Coit Tower, and the popular California sea lions. Mount Rushmore will also be featured, and though it’s not exclusive to LLNY, this will be the first time the structure is animated.

INSIDER TIPThere will be numerous interactive elements to the Miniland, like Minilanders and vehicles that can move at the touch of a button. Look for the white podiums with buttons to activate the different details.

There are Rows and Rows of Every Shape and Size Lego

You might be wondering, as we were, where the Master Model Builders get their Lego pieces. Could they possibly have enough room at each station to house every possible Lego brick? Well, let us bring you in on the secret…there are about 10 rows of shelves that run down the warehouse’s middle. Each unit has eight shelves on each side that are filled with boxes and boxes of every Lego brick you could want or dream of—red pieces, green pieces, palm fronds, animals, 2X2s and 4X4s…the list goes on and on and it will bring any Lego fan to tears. We’ll admit it. We may have shed a tear or two.