The good news is, according to the United States Geological Survey, there are eight fewer volcanoes in the U.S. that pose a threat to “American lives and property” than there were in 2005. The less good news is, that still leaves 161 volcanoes, with 18 of them being rated as posing a “very high threat.” The study, which came out in 2018, looked at several factors, including proximity to populated areas and potential disruption to transportation routes, to determine which volcanoes posed the biggest threats. It should be noted that when a volcano erupts can’t be predicted with absolute certainty, some of the following volcanoes may not even erupt in our lifetime—but if they do, the results could be catastrophic.

Trip Ideas Bailey Berg 25 Ultimate Things to Do in Alaska 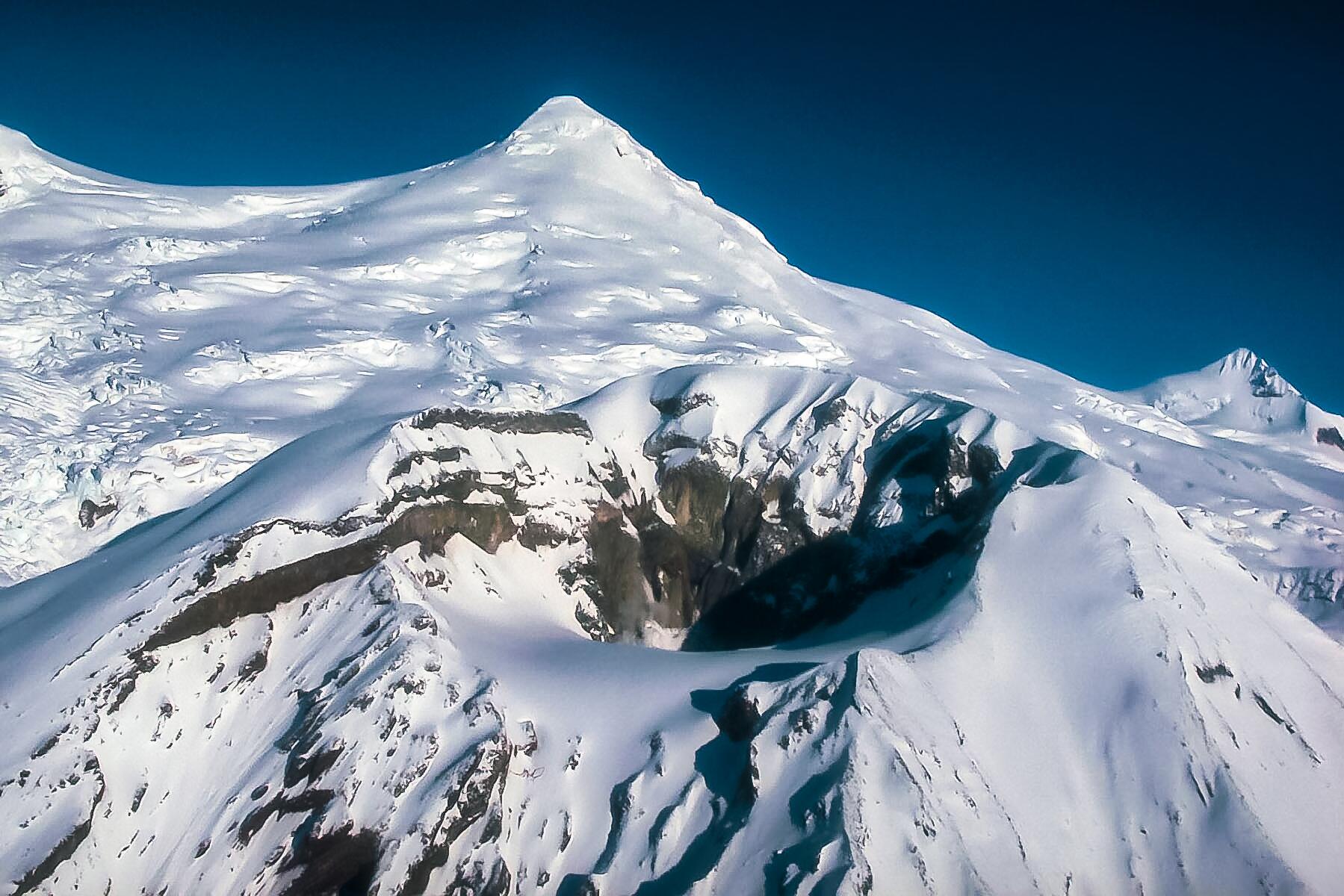 Approximately 80 miles from the city of Anchorage lies Mount Spurr—the closest volcano to Alaska’s largest city. “80 miles” sounds more like the distance you drive for a day trip and less like a visit to your neighbor, but when Mount Spurr erupted in 1992, the resulting ash fell as far as 370 miles away. One Anchorage resident described the aftermath as, “looking like midnight in the middle of winter.”

Perhaps more concerning, however, is Mount Spurr’s location with regards to aviation flight paths. An eruption from the volcano would be disruptive to air travel and the ash could cause jet engines to fail. 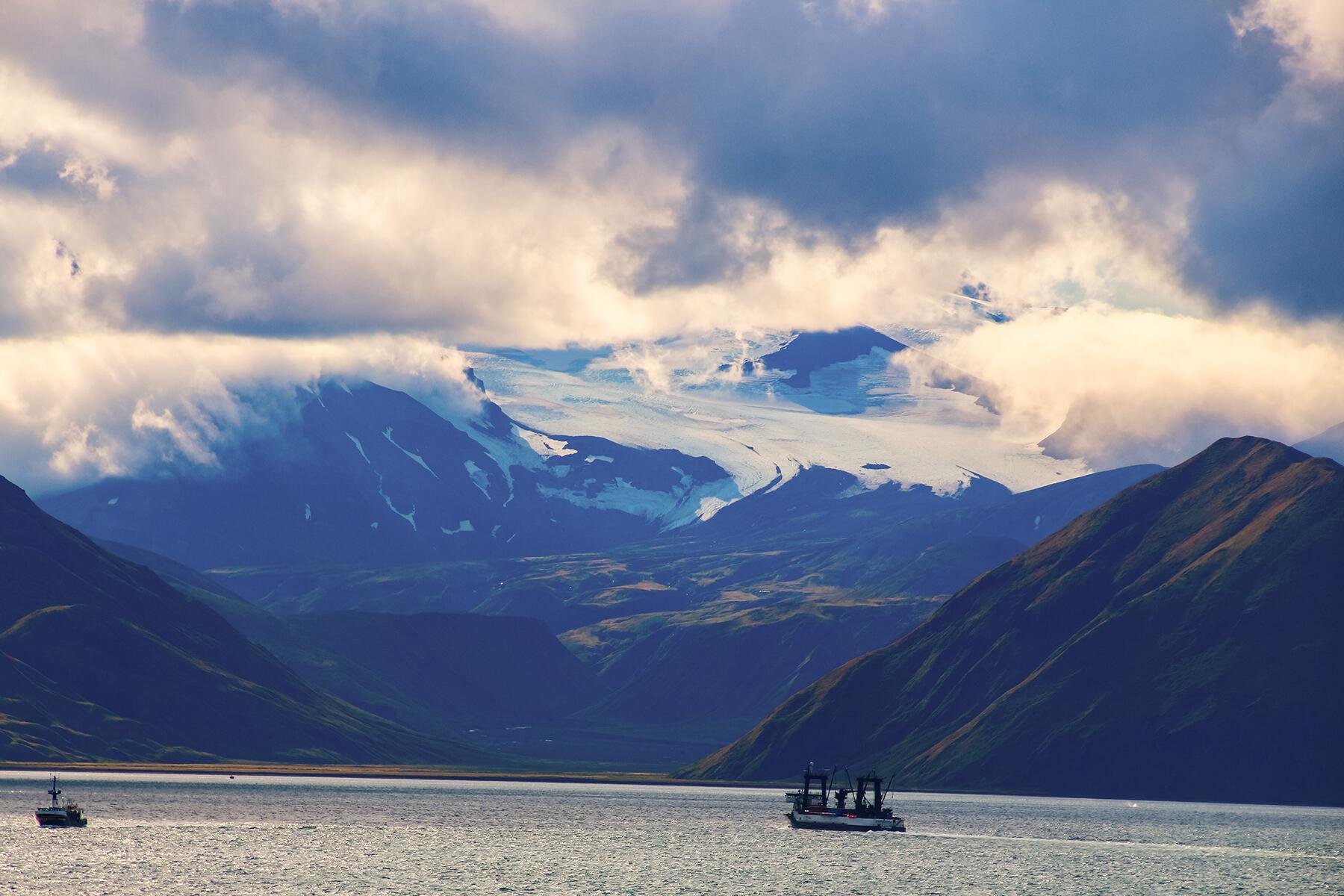 Makushin Volcano is Unalaska Island’s highest peak and one of the most active volcanoes in Alaska. Its most recent eruption in 1995 is considered to be quite small compared to its track record over the last 4,000 years. Over the last several millennia, Makushin’s eruptions have been violent, sometimes producing pyroclastic flows (which the USGS describes as fast-moving and capable of destroying everything in their path). Like Mount Spurr, if Makushin Volcano erupts, it has the potential to be disruptive to air travel and dangerous to aircraft. Though there has been some seismic activity since the 1995 eruption (earthquakes too small to be felt by humans), Makushin has remained quiet for the last 25 years. 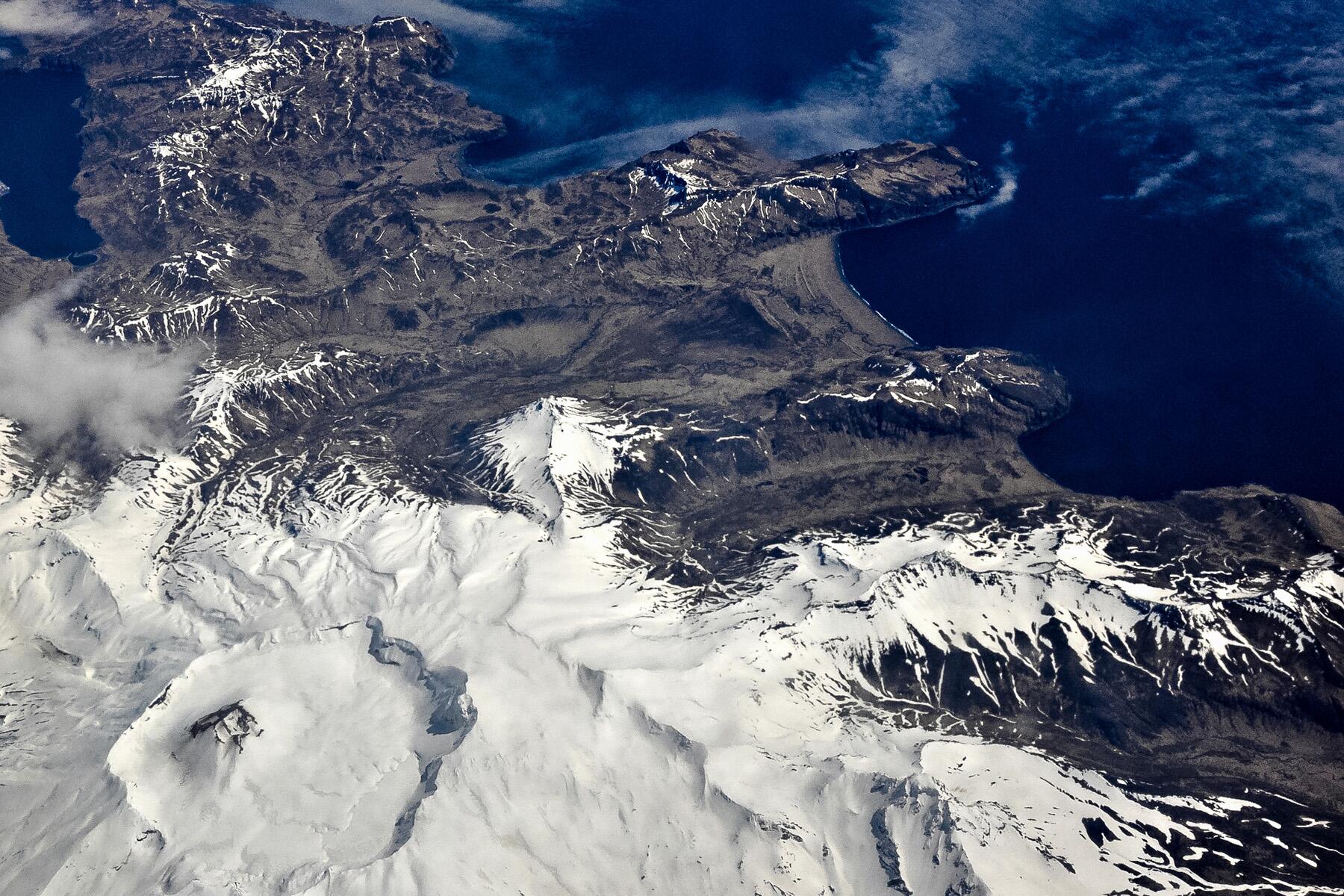 Not far from Makushin Volcano is Akutan Peak. The volcano is just under eight miles from Akutan and its population of 1,000 people. Like Makushin (which is also located in the Aleutian Islands), Akutan Peak has had an active and explosive history over the last few thousands of years—though its eruptions over the last couple of hundred years have been relatively tame by comparison. Again, disruption to aviation pathways, dangers posed to aircraft, and ashfall would be among a potential eruptions dangers. 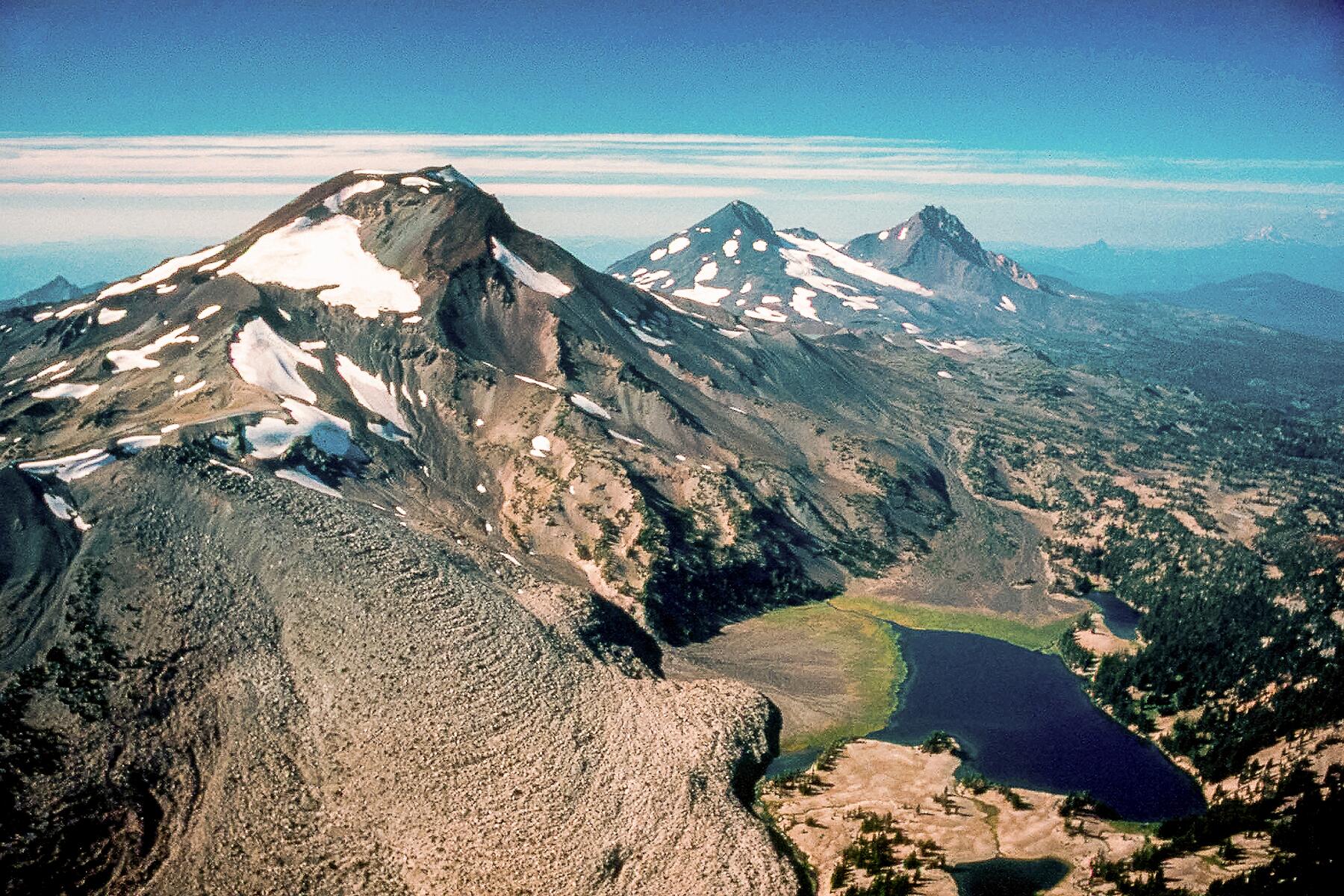 However, in the ‘90s, satellite footage of South Sister showed that it was bulging, believed to be caused by a buildup of magma. The bulge stopped increasing in size in 2005 but it hasn’t deflated either.

Close proximity to growing communities and resort areas and popularity among hikers and rock climbers, make the Three Sisters an unsettling presence. One of the potential hazards of a South Sister eruption could be the creation of lahars (violent debris flows) that could reach as far as the “communities such as McKenzie Bridge or Sisters or even further downstream.” 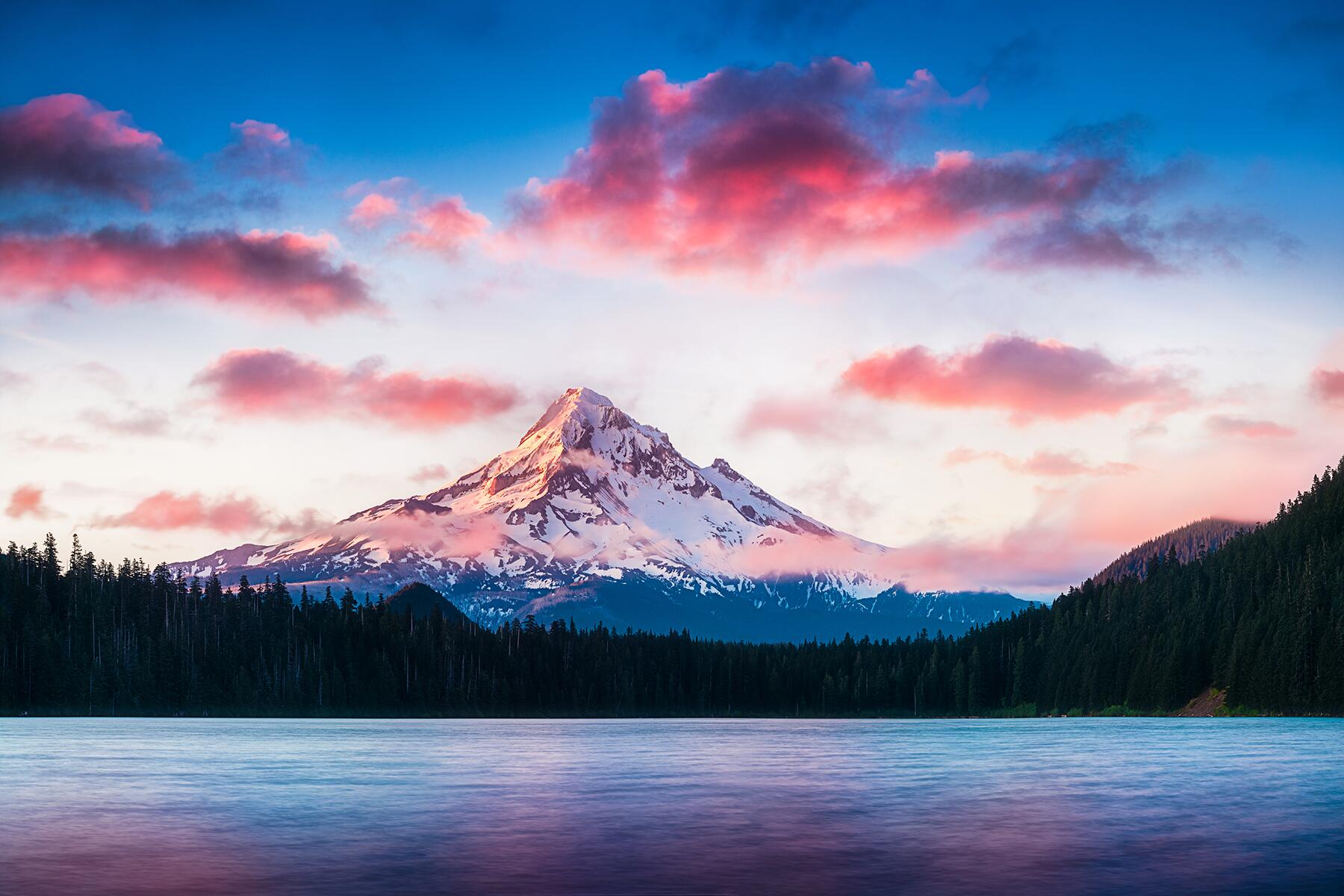 Mount Hood serves as a scenic backdrop for the city of Portland—but a terrifying potential lurks below Oregon’s tallest peak. In fact, Mount Hood doesn’t even need to erupt to be dangerous. In 1980, heavy rains melted the glacial snow causing rapid erosion caused a lahar that killed a nearby camper. Scientists expect Mount Hood’s next eruption to be relatively minor, but even a minor eruption could cause ash clouds, pyroclastic flows, and lahars. Lahars are would be particularly destructive as they would easily race down river valleys. This would be immediately dangerous for the people living in the paths of the lahars, but this could also cut off major ground transportation routes—a disruption that could take up to years to rectify. 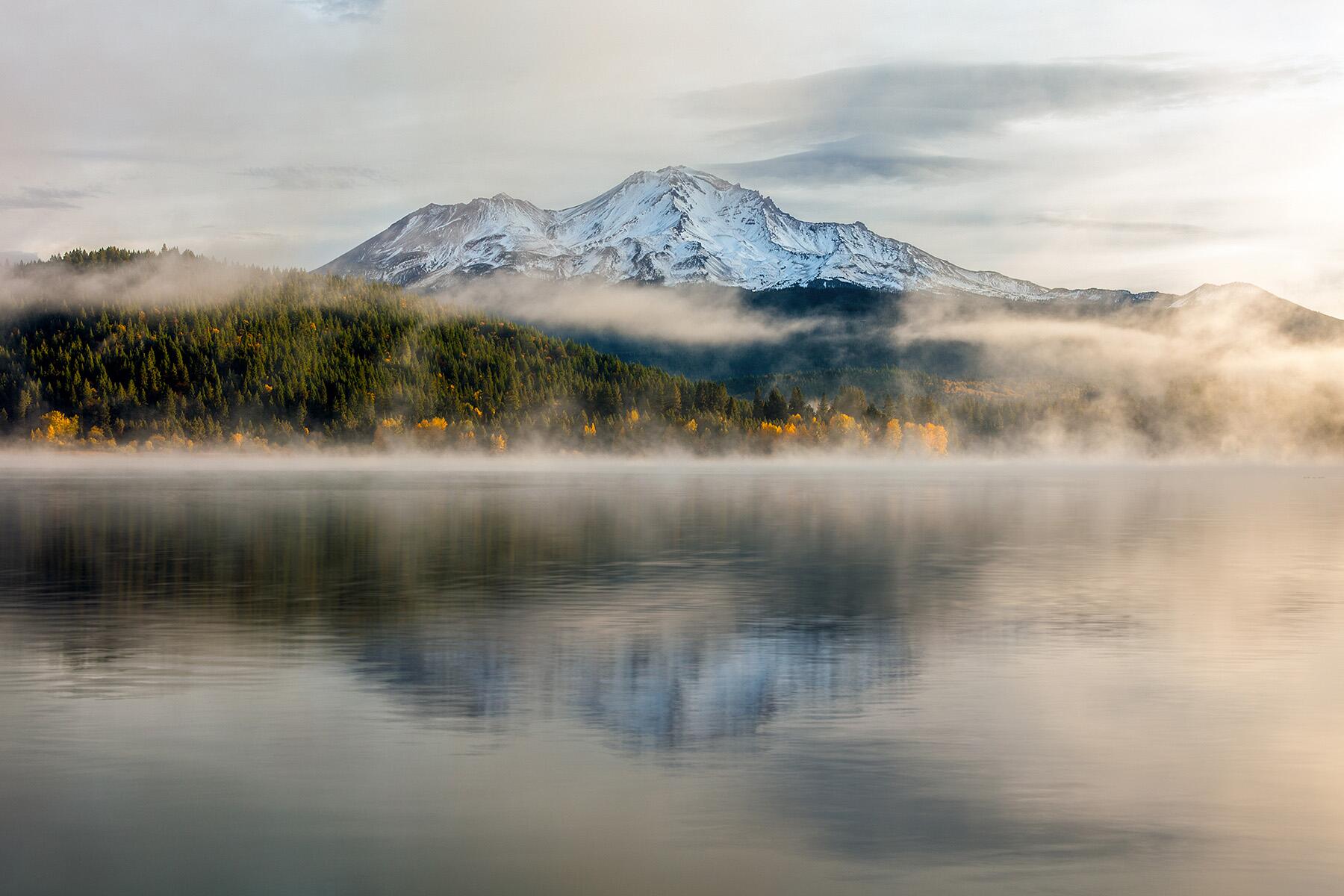 Just as no one can predict with absolute certainty when a volcano erupt no one can predict with 100% accuracy how it will erupt. But the possibilities for Mount Shasta’s next eruption run from the volcanic equivalent of a light cough to part of the mountain literally collapsing. According to the USGS, “a portion of the volcano could also fail catastrophically and generate a very large debris avalanche or lahar.” Mount Shasta’s next eruption may also include a lateral explosion similar to Mount St. Helen’s 1980 eruption could also occur as well as ash, pyroclastic flows, and lahars. The good news is, the type of activity (volcanic earthquakes and deformation) has been low to negligible over the last decade. 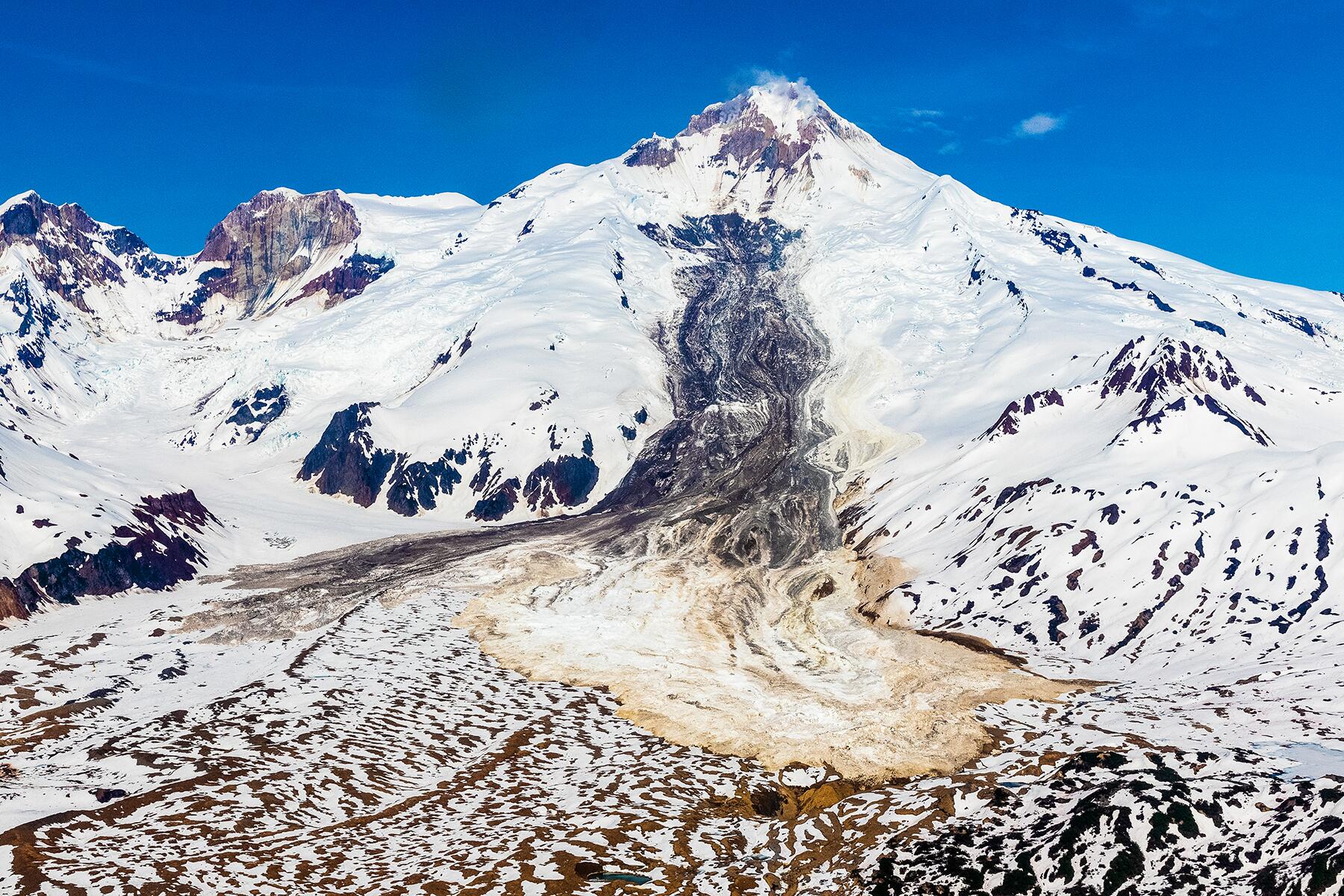 Like the other volcanoes along the Aleutian Arc, an eruption from Redoubt Volcano would come with disruption to the busy route and danger to aircraft, and ashfall that could affect several nearby communities including Anchorage. But Redoubt also came with an additional problem—its proximity to Drift River Terminal Facility, an industrial crude oil storage facility. There weren’t oil spills as a result of the 1989 and 2009 eruptions that set off lahars and flooding that threatened the facility, the possibility of hazards from Redoubt’s eruptions setting off an ecological disaster remained. However, this particular factor in Redoubt’s threat score seems to have been mitigated. In 2018, the company that owns the facility applied to have it decommissioned. 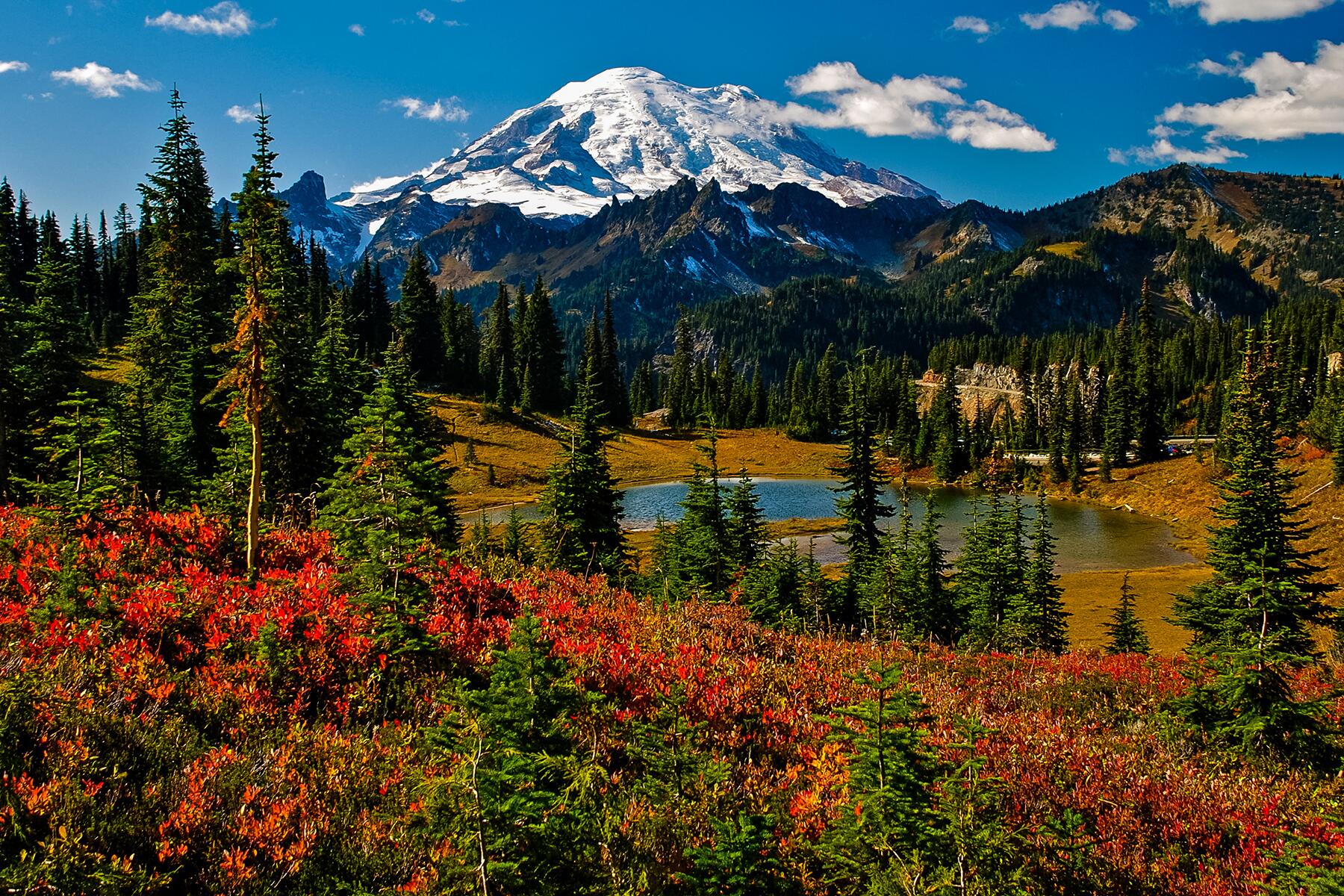 The USGS is far from the only organization concerned with what a future eruption from Mount Rainier could look like. The International Association of Volcanology and Chemistry of the Earth’s Interior also identified Rainier as a “Decade Volcano”—a selection of 16 volcanoes across the world that should be closely studied due to their history of major eruptive activity and proximity to populated areas. And Mount Rainier is just 60 miles from with Seattle—with 80,000 people alone living in lahar-hazard zones. Though the volcano is closely monitored, an eruption may not give much warning, leaving the 80,000 people in those hazard zones with mere minutes to remove themselves from a lahar’s destructive path. 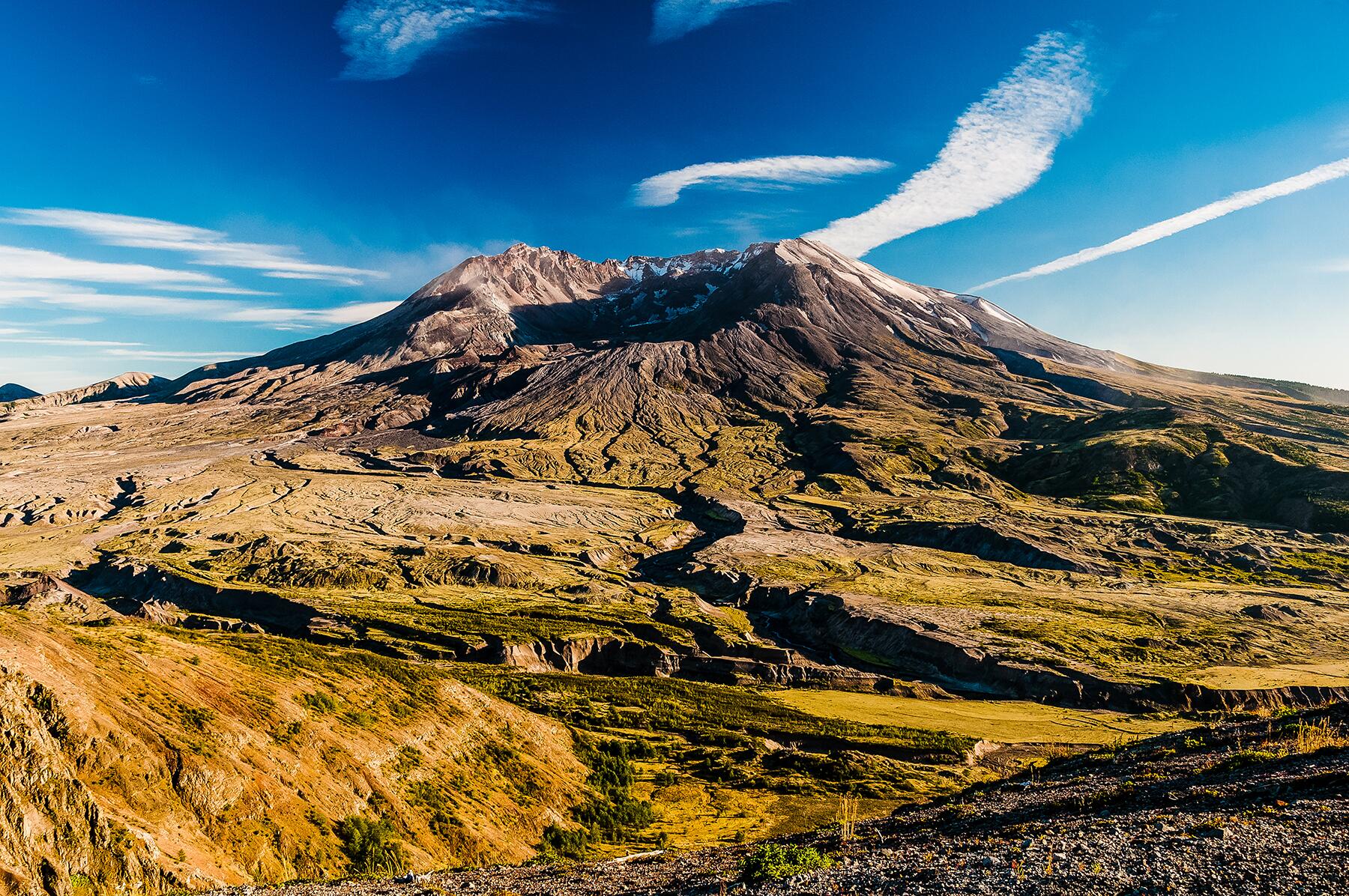 The most disastrous volcanic eruption in the U.S. occurred on May 18, 1980, when a lateral blast from Mount St. Helens devastated the surrounding area. The ash reached 15 miles high. By the time the eruption had stopped the ash had spread as far as the central United States. The destruction caused by the eruption cost over a billion dollars and took the lives of 57 people.

Forty years later, Mount St. Helens is the volcano in the Cascades that the USGS expects to erupt again in our lifetimes. The 1980 eruption that formed the crater that exists today means that “neither a large debris avalanche nor a major lateral blast” is likely to occur when St. Helens erupts in the future. But hazards such as lava flow, explosive eruptions, pyroclastic flows, and large lahars may accompany future eruptions. 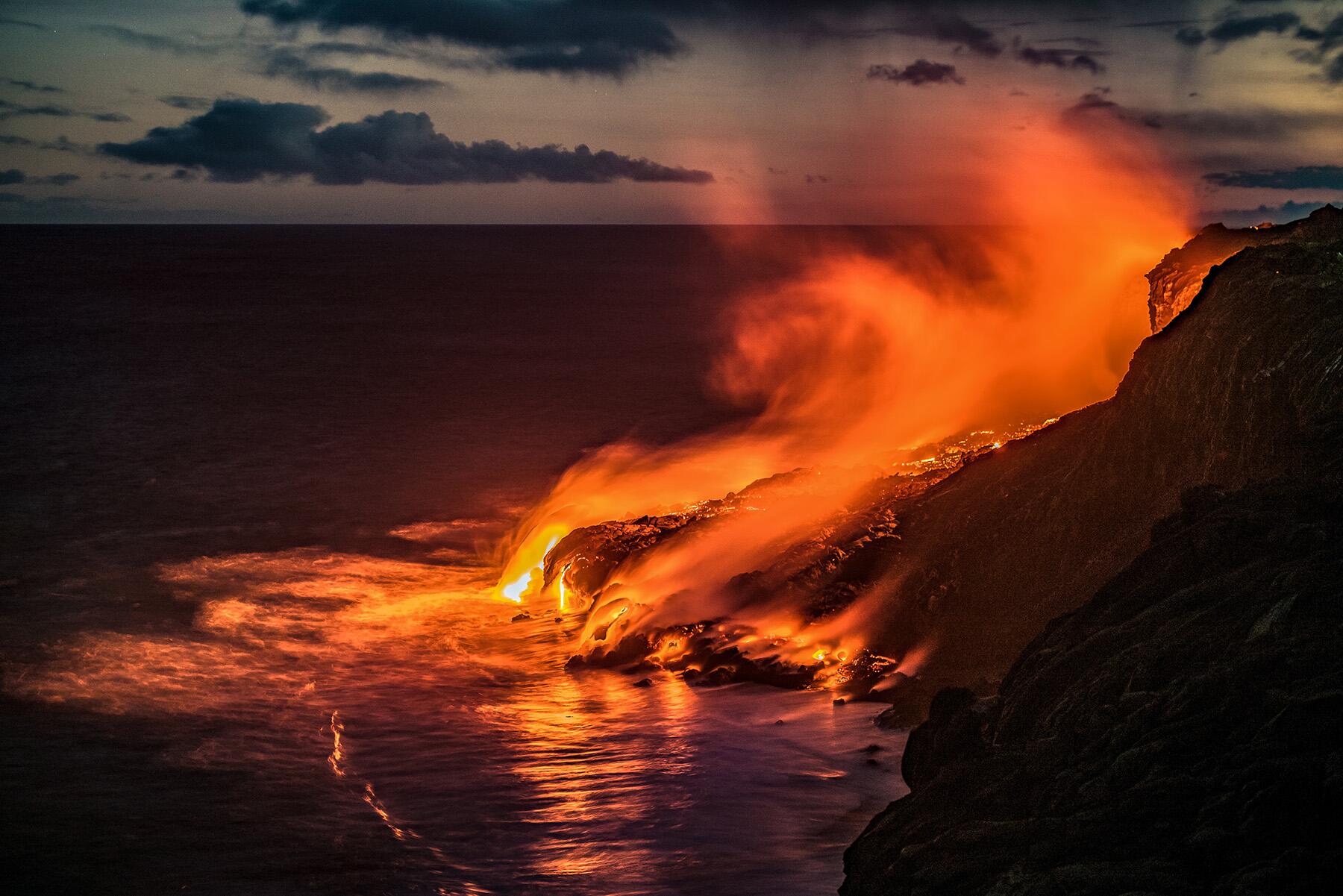 Kīlauea had been erupting nearly continuously since 1983 before culminating in the destructive Puna eruption that lasted from May through September of 2018. By the time the activity drew to a close at the beginning of September 2018, lava-covered 13.7 square miles of the island the lava flows had boiled the water in Hawaii’s largest freshwater lake and destroyed 700 homes. Currently, Kīlauea is not erupting and has only displayed minor geological changes since September 2018. But it’s still an active volcano, so a future eruption is a matter of when and not if. And while there are specific signs that preempt an eruption, those signs may occur in a narrow frame of time, leaving little time to react before a potential eruption.