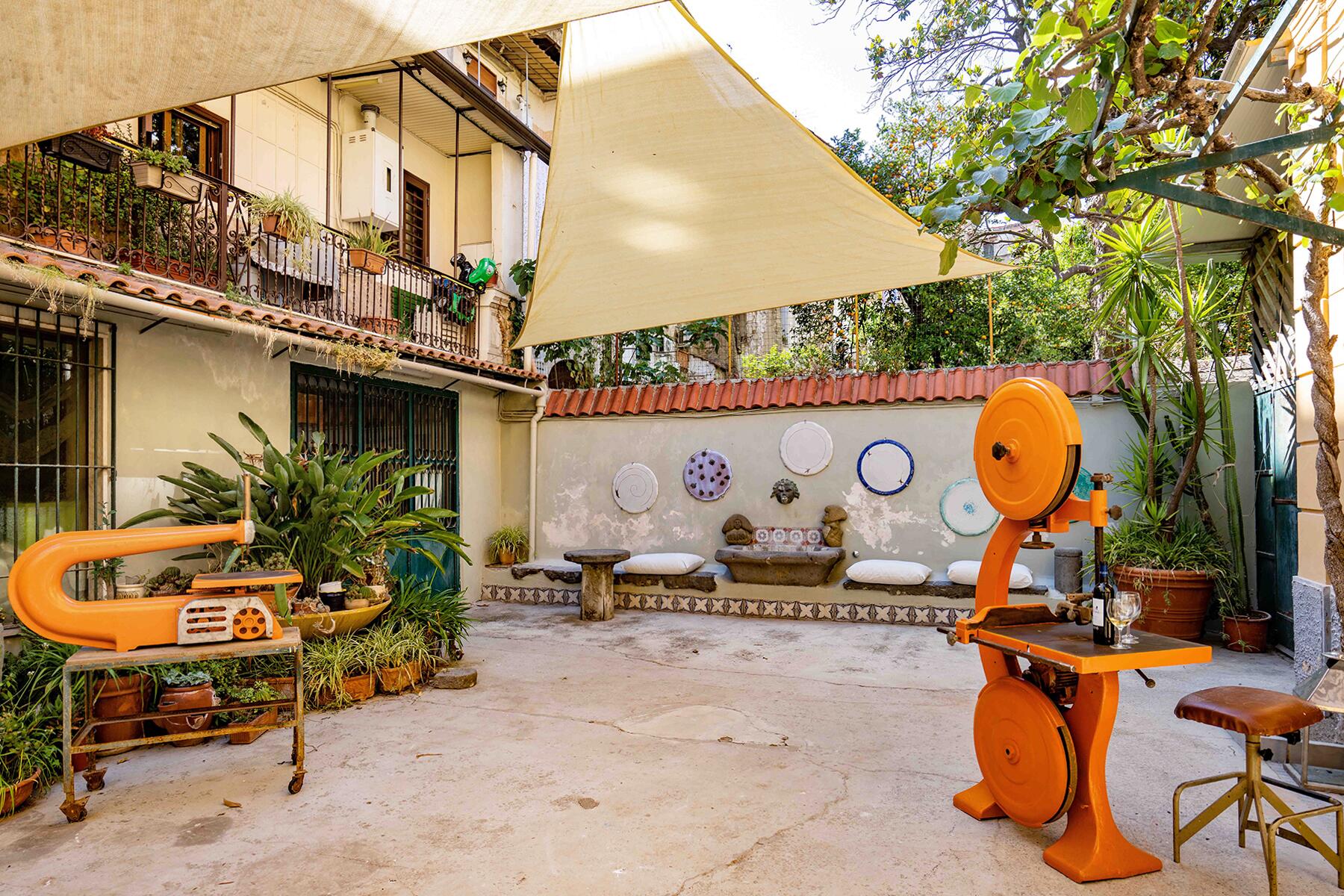 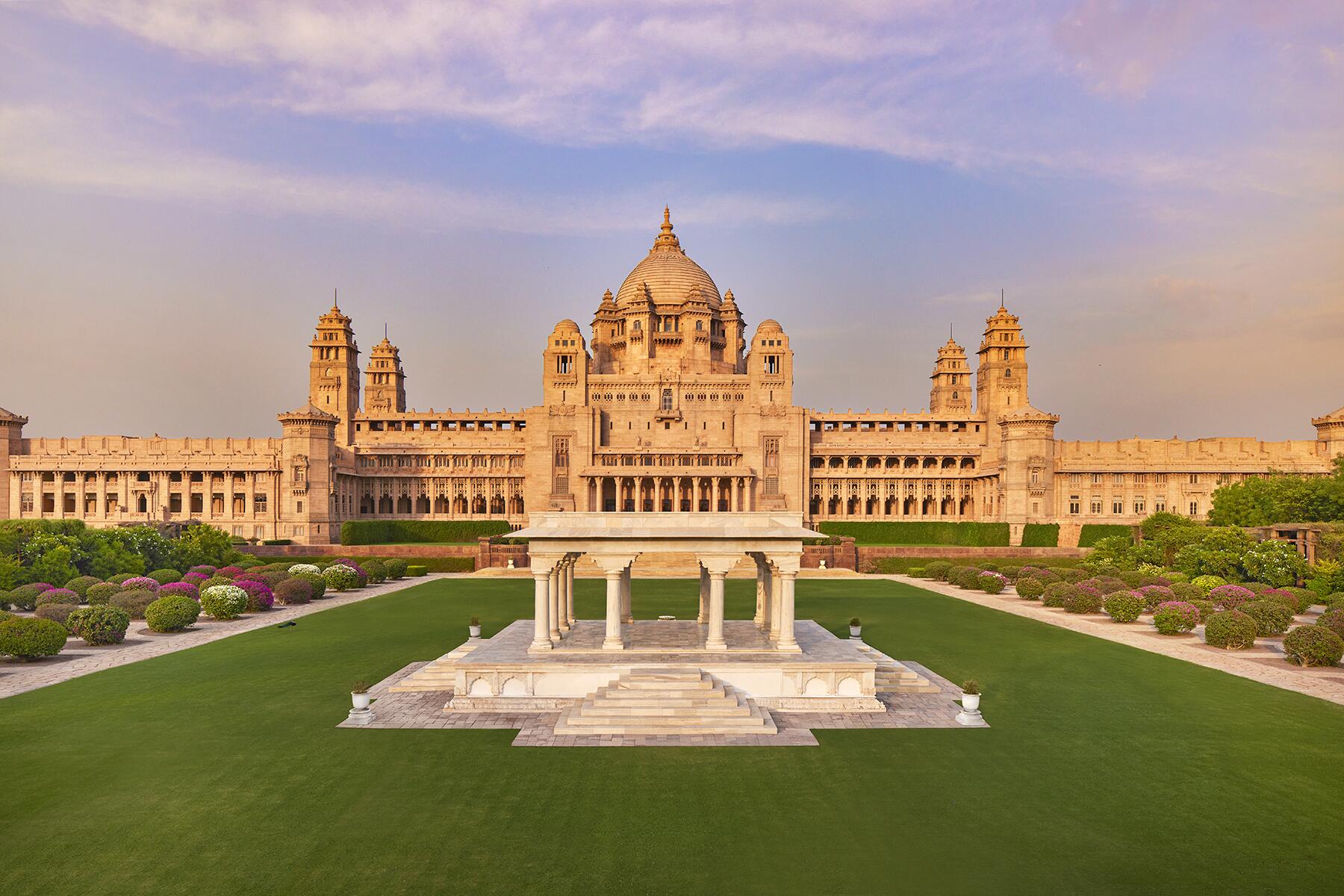 Sleep in Elvis' bedroom, work 9 to 5 in Dolly’s penthouse, or take a dip in Leo’s pool by checking into these A-list digs.

Have you ever dreamed of living the VIP life, even just for one sweet night? Or yearned to swap a generic hotel room for a storied castle fit for royalty? Perhaps you’ve even pondered how Elvis’ teenage home helped shape the rockabilly legend? Then read on for our list of the most unique homestays beloved by celebrities. From a shotgun shack that hits all the right notes to a sprawling Italian villa, these heavyweight homes are available to book right now for your next star-studded vacation. 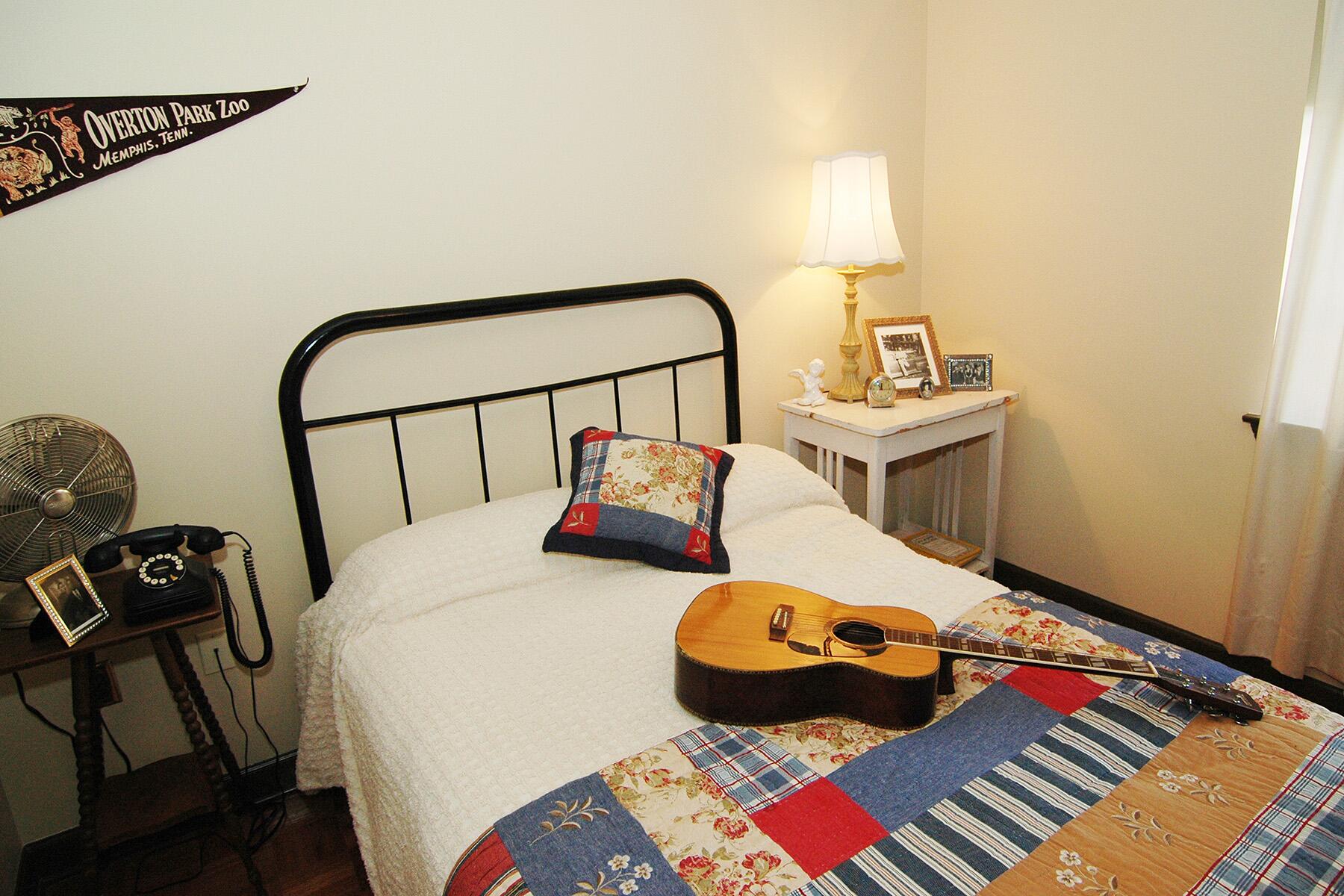 Get All Shook up at Elvis’ Apartment

Music fans should shake a leg and book a stay at 328 Lauderdale Courts in Memphis, the only Elvis-owned house in the world to offer fans overnight visits.

The King of Rock and Roll lived here with his parents between the ages of 13 to 17 when it was one of America’s first social housing projects. The two-bedroomed apartment has since been restored to its former mid-century glory, including vintage furnishings and a bumper collection of classic Presley films for swivel-hipped movie nights in.

And there’s even a skillet pan and recipe card to rustle up Elvis’ favorite fried peanut butter and banana sandwiches, should the urge for a calorific midnight feast take hold. 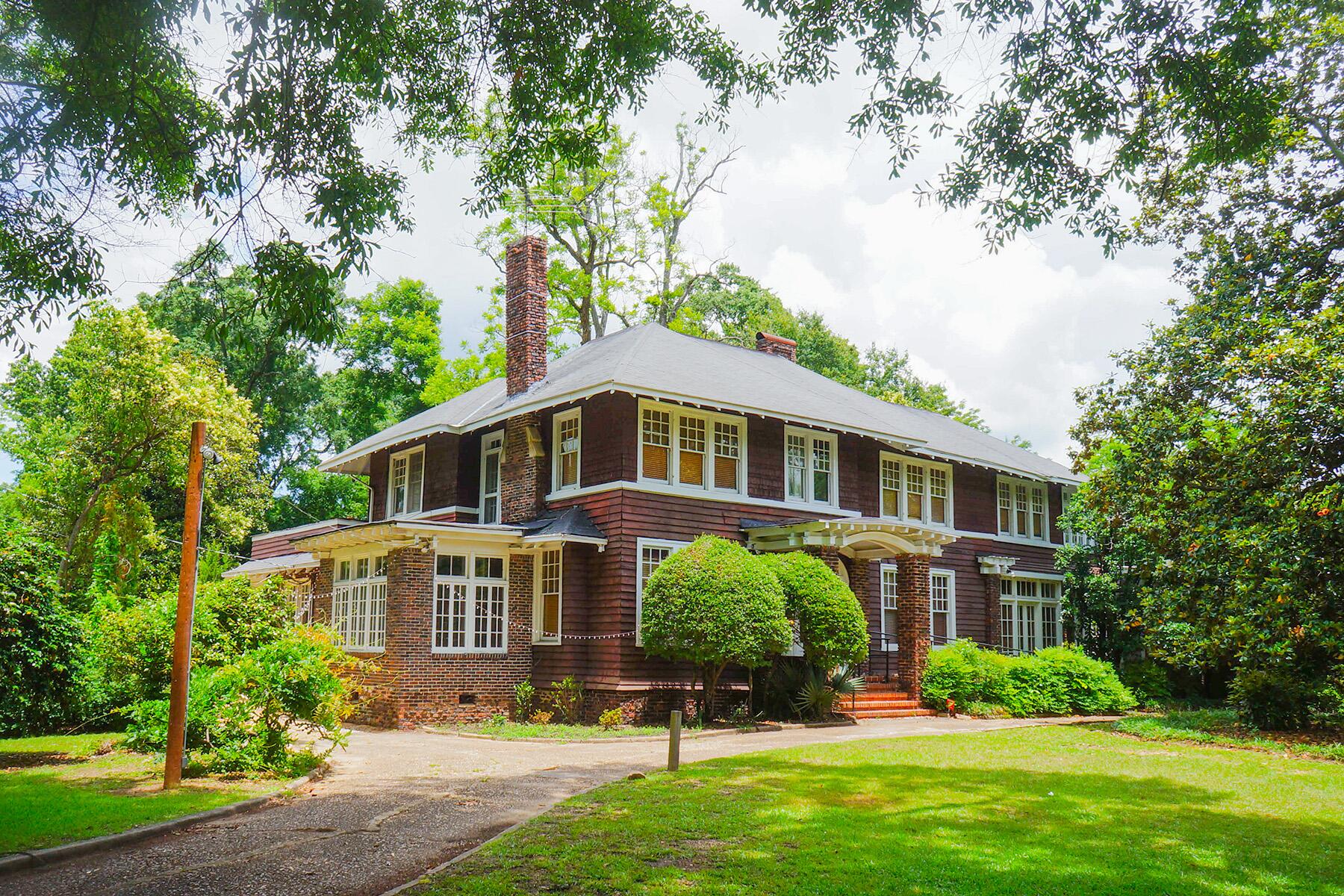 Waltz Back Into the Jazz Age With a Great Gatsby Sleepover

This surely has to be the ultimate bibliophile’s sleepover, offering not one, but two legendary authors for your buck! Relive the glamour of the Roaring Twenties with a literary sleepover in this quaint bungalow in Montgomery, Alabama.

In this very house, Zelda Fitzgerald penned her semi-autobiographical novel Save the Waltz, while her partner F. Scott Fitzgerald scrawled the American classic Tender Is the Night in the adjoining room.

The historical home has since been carved up into two gorgeously restored suites, filled with period furniture and original wallpaper. Downstairs you’ll find the world’s only museum dedicated to the Fitzgeralds, open to the public in the daytime.

INSIDER TIPThe Scott and Zelda suites are both available for rent exclusively through Airbnb, from $90 and $150 per night.

Live Like a Hollywood Legend in Leonardo DiCaprio's Palace

Throw a stone in Palm Springs and you’re likely to hit an A-lister. Kanye West, the Obamas, Harry Styles, and Brad Pitt have all vacationed in this dreamy desert oasis, making it a veritable hotbed for celebrity homes.

What makes 432 Hermosa special isn’t just that actor Leonardo DiCaprio once owned this architecturally renowned home, it’s that you can stay overnight and live out your movie star dream.

Make like Leo and take a dip in the palm-lined pool, stroll the manicured gardens, or recline in one of the six guest bedrooms dotted throughout this mid-century gem of a house. Sadly, there’s not a Titanic trinket insight.

INSIDER TIPThe home can be rented out (two-night minimum) starting at $3,750 per night.

You won’t need to worry about people standing so close to you at this majestic Italian villa, accommodating up to 50 of your nearest and dearest.

The 16th-century estate, nestled into the rolling hills and olive groves just outside of Florence, has been owned by Trudie Styler and her musician husband Sting for over 15 years.

When they’re not using it as their palatial summer retreat, guests can book it for a taste of the good life, replete with tennis courts, a lake for wild swimming, and a state-of-the-art recording studio should you feel inspired to lay down some tracks. 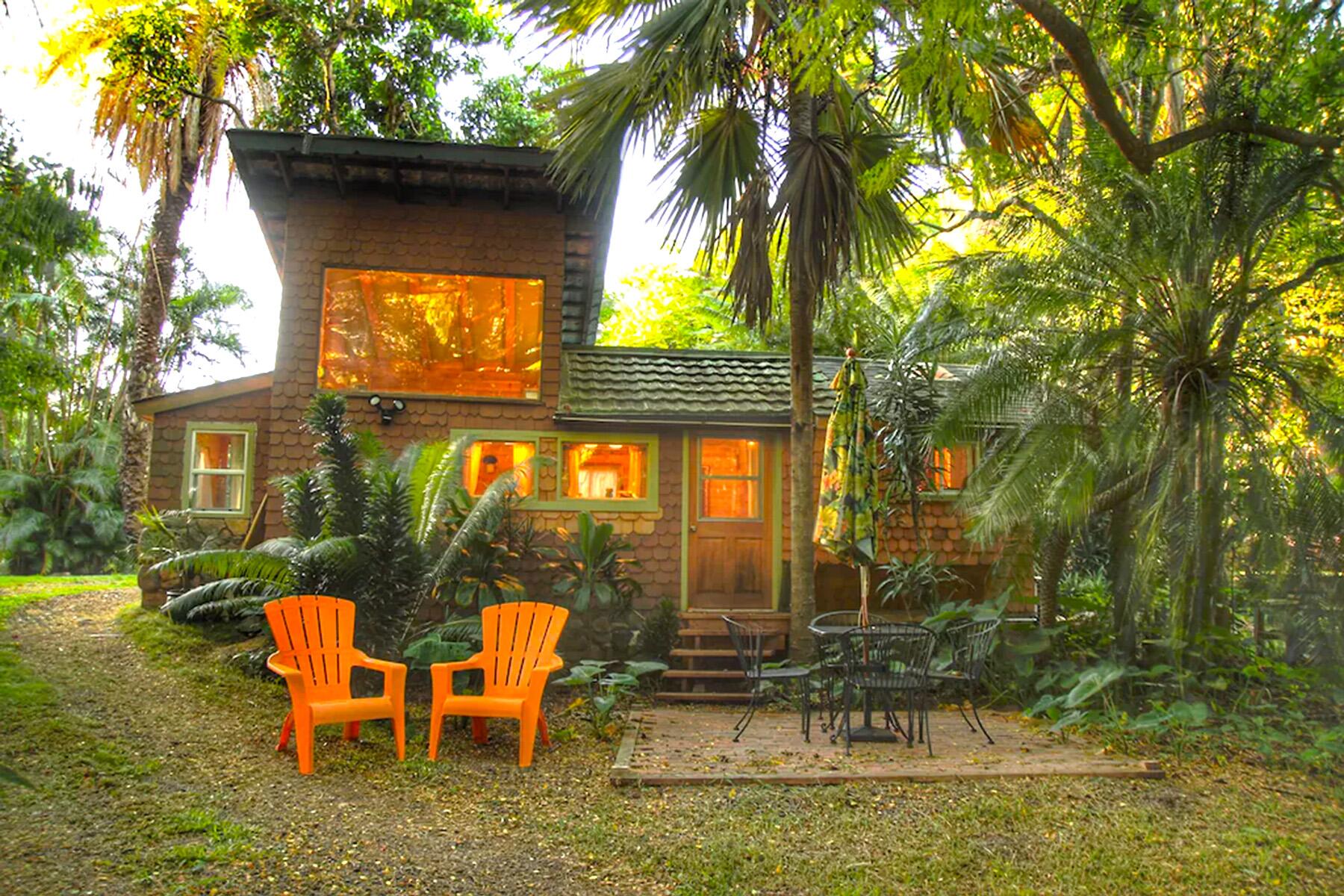 Party Like a Rock Star in Jimi Hendrix’s Gingerbread Cottage

Looking like it’s tumbled out of the pages of a fairy-tale book, this whimsical cottage is where legendary rock god Jimi Hendrix called home while filming the Rainbow Bridge documentary back in 1970.

Situated on Maui, Hawaii’s second-largest island, The Gingerbread House dates back to the 1930s and features awe-inspiring cathedral ceilings. The studio cottage is set within lush tropical gardens while a short hike away you’ll discover Maui’s renowned beaches and volcanoes.

To really tap into the Voodoo Chile vibes, take a trip to the pasture near Haleakala Crater in Maui, where Hendrix performed an outdoor concert.

INSIDER TIPRent the Gingerbread House from $220 per night on Vrbo. 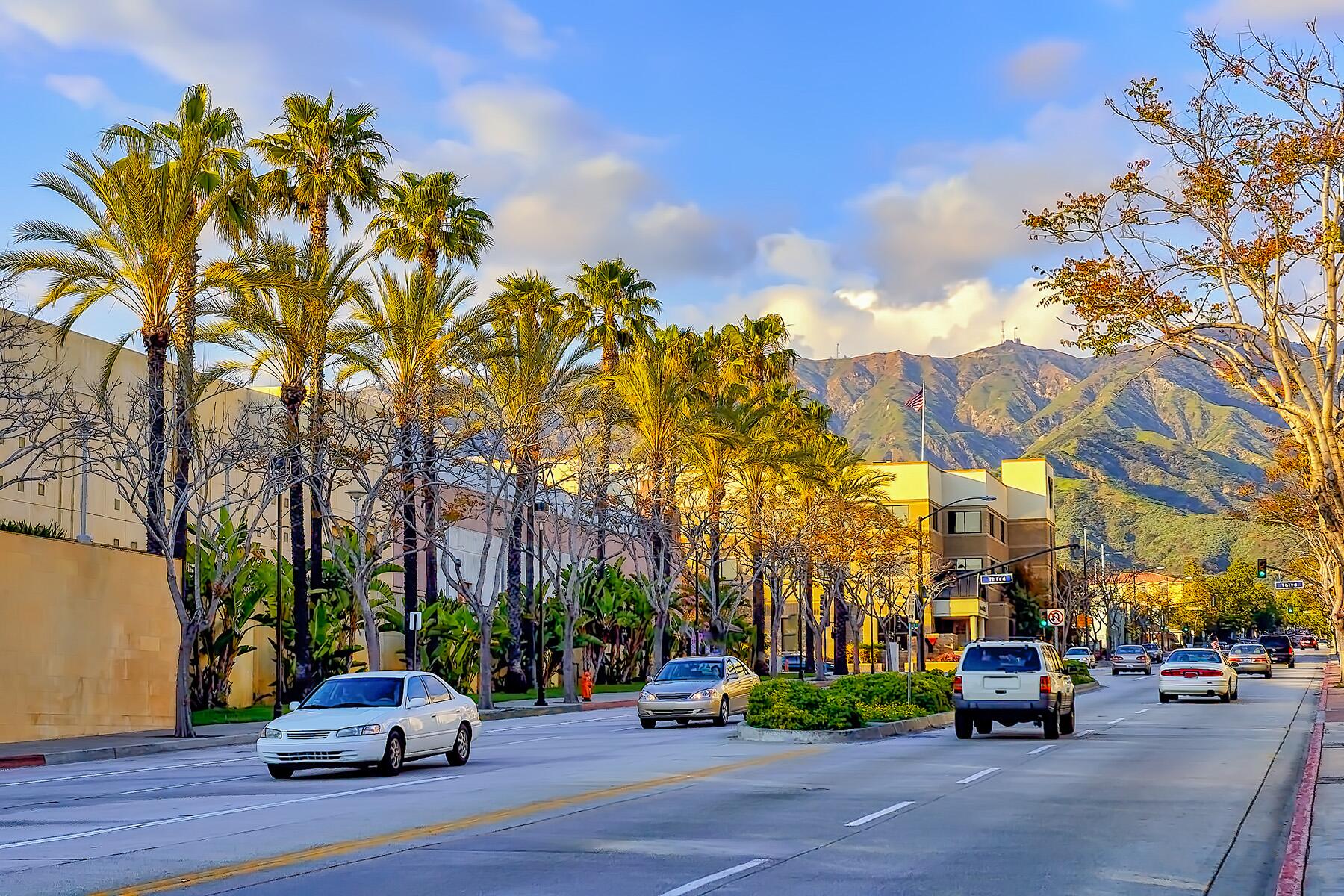 Sashay into Hollywood’s Golden Age like a total goddess, by staying at Ava Gardner’s former home. The screen siren lived here in the 1940s for a year with her second husband Artie Shaw, the famous big band leader who once described Gardner as “the most beautiful creature you ever saw.” Despite his adoration, the marriage was short-lived and the couple soon parted ways, moving out of Rancho Equestrian to Burbank.

It’s since been converted into an Airbnb rental, complete with a library bursting with over 1,000 books to read in front of the roaring log fire. Ticking all the celebrity boxes, the secluded gardens are ringed with high walls for privacy and there’s even a stable space to bring your own horse. And all the movie studios are within arm’s reach, so aspiring actors can do the rounds.

INSIDER TIPBook your stay for $100 per night. 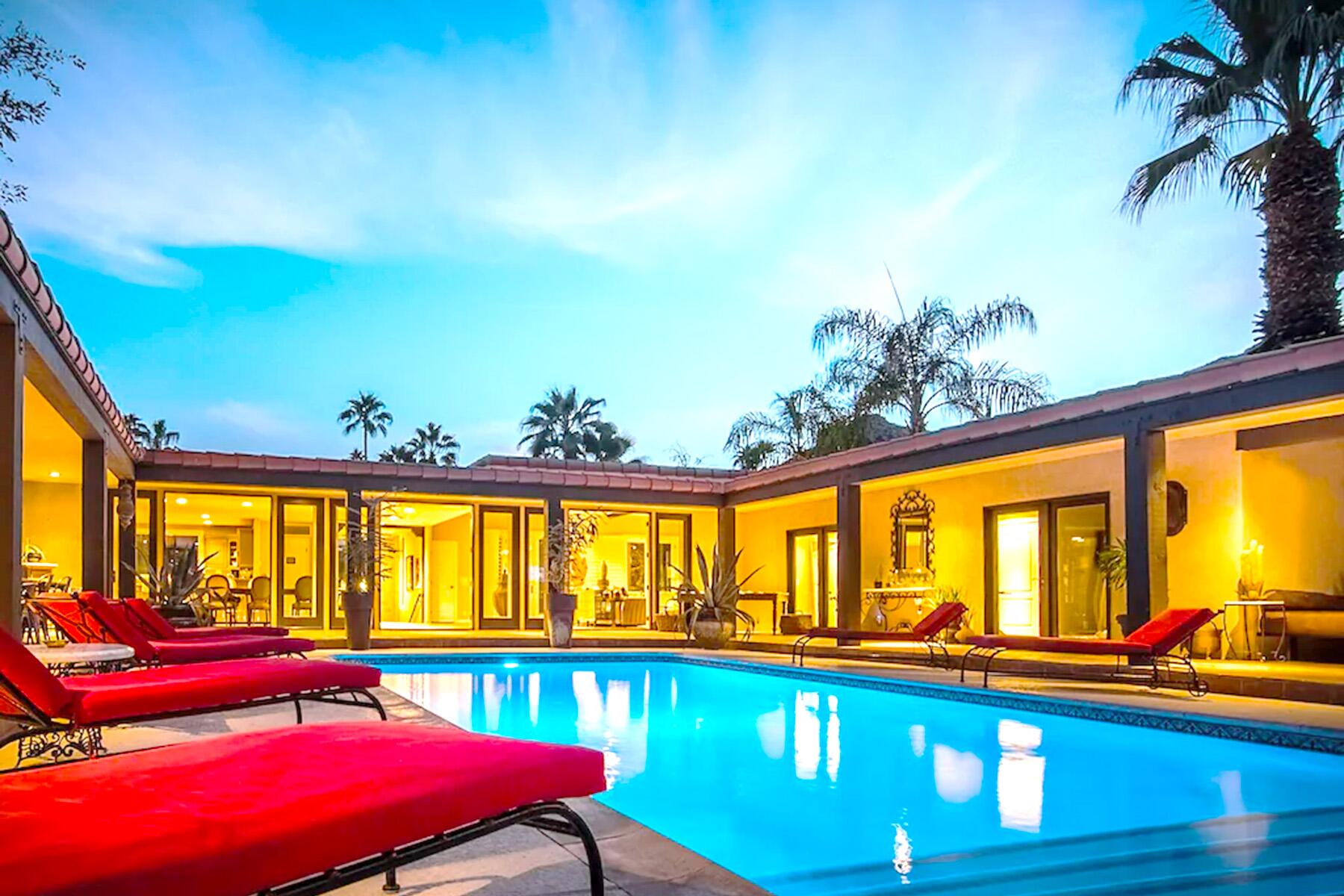 Sonny and Cher were right about one thing—their love couldn’t pay the rent. But your hard-earned cash will if you’re willing to fork out for a stay at this glamorous Palm Springs villa, nicknamed Villa Carmelita.

Once home to Sonny and Cher, Villa Carmelita is an oasis of calm with its courtyard pool, walled estate, roaring fireplace, lush grounds, indoor and outdoor showers, and jacuzzi.

INSIDER TIPFind it on Vrbo starting at $1,039 per night. 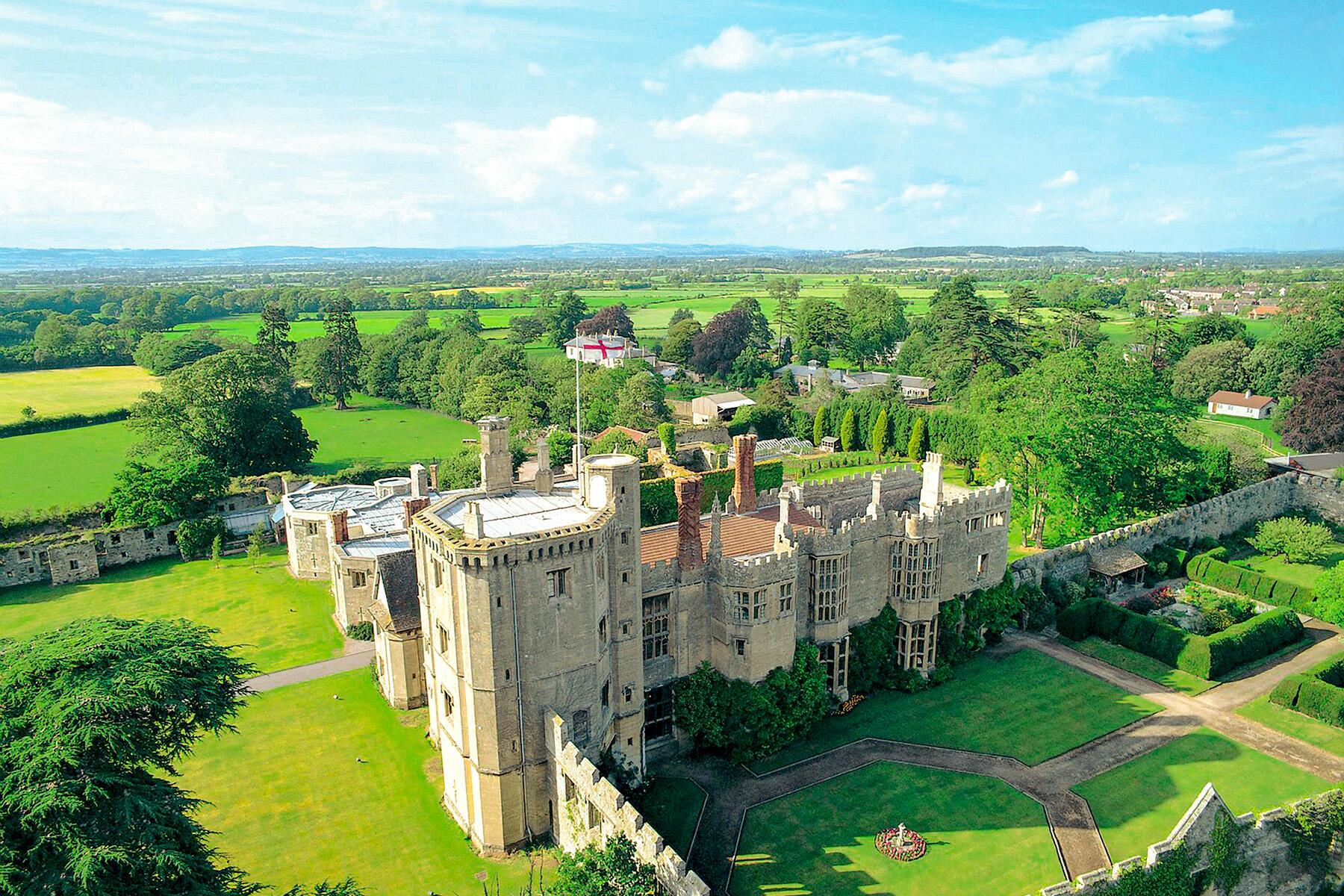 A Regal Sleepover in Henry VIII’s Bedchamber at Thornbury Castle

Bring history to life with a stately stay at Thornbury Castle, which has lowered its drawbridge to allow overnight guests. King of England Henry VIII and his ill-fated wife Anne Boleyn stayed in this 500-year-old castle, overlooking the oldest Tudor gardens in the country.

Guests can now book a stay in Henry and Anne’s favorite room. Reached by venturing up an echoing spiral stone staircase, the bed-chamber features an ornate four-poster bed and a cozy open fireplace. Be sure to check into the castle’s grand paneled dining room for dinner, which has attracted the likes of Sophia Loren and Laurence Olivier.

INSIDER TIPBook your stay starting at $560 per night for a couple, including dinner, bed, and breakfast.

Dance Like No One’s Watching at Julie Andrews’ Artistic Dwelling

Channel your creative energy at The Rubber House, an artistic retreat featuring its own dance studio, complete with a wall of mirrors and barre for pirouette practice. Since architect Tom Pritchard built this house using sculptural forms sheathed in black rubber, it’s become almost as famous as its residents, who include ballerinas and the English actress, singer, and author, Dame Julie Andrews DBE.

From the vantage point of her master bedroom, you’ll find sweeping views of the nearby nature reserve filled with rugged hiking trails. There’s also a writer’s tower for bashing out that long-awaited first draft of the novel surrounded by whispering trees and birdsong.

INSIDER TIPVisit the Rubber House website to book your stay, starting at $2,500 for your first week.

Filmmaker, actor, and all-around comedy genius, Charlie Chaplin organized for this cluster of villas to be built in 1931, primarily to house the crew and actors working nearby on his latest movies.

Homesick for his birthplace, Chaplin aimed to create a miniature English estate in the heart of the city. His design vision went heavy on the mock Tudor beams, leaded glass windows, and cottage garden planting. After Chaplin moved on in the 1940s, the estate fell into disrepair but has since been painstakingly renovated, with vintage typewriters and classic memorabilia peppering the interiors.

Each of the 13 cottages has since been named after a distinguished former guest, including Betty, Clark, Gregory, and of course, Charlie’s pied-a-terre.

INSIDER TIPBook your stay starting at around $350 per night. 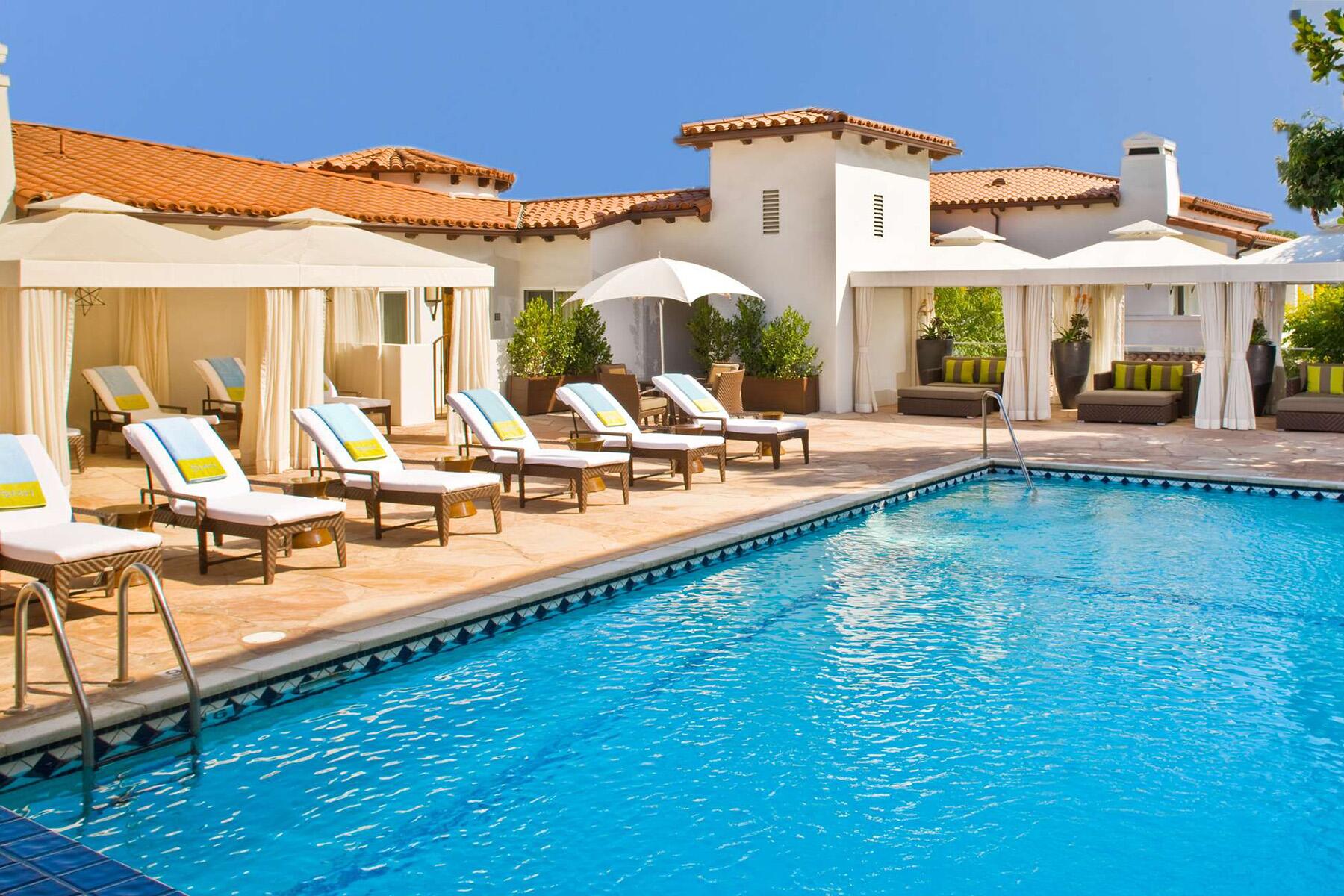 Fancy rubbing shoulders with the rich and famous? Then head to Sunset Marquis, an iconic sanctuary in the heart of Sunset Strip. Throughout its 60-year history, the Sunset Marquis logbook has read like a who’s who of the entertainment industry, including check-ins from the likes of Elton John, George Clooney, and Jennifer Aniston.

But it’s the hotel’s sumptuous residential villas, discreetly tucked away in lush private gardens that attract celebrities looking for a home away from home experience, including actor and author Whoopi Goldberg. Oversized rooms, patios for soaking up the Californian sunshine, and private driveways to avoid the paparazzi glare, mean these ultra-luxe villas have been known to entice stars to keep coming back.

INSIDER TIPDeluxe one-bedroom villas come with a complimentary Tesla for hire for around $1,300 per night.

Fans of Dolly should hotfoot it to Tennessee’s stunning Smoky Mountains, where the non-stop Dolly-fest includes her Dollywood theme park, a boot-stomping stampede dinner show, and her DreamMore hotel resort.

This family-friendly hotel oozes southern hospitality. There are rocking chairs on the front porch overlooking the misty mountains and Dolly references lavishly sprinkled throughout the interiors, from her butterfly motif to bejeweled musical instruments.

But the hot ticket room here is the Dolly Parton suite, an ultra-glam apartment with a four-poster bed, which the Queen of Country personally uses when she’s in town. You may also be lucky enough to catch a view of Dolly’s home-on-wheels tour bus, often parked at the front of the resort.

Dubbed the Winter White House, this exclusive, ocean-fringed estate has become a vacation magnet for the Obamas over the years. Their favorite place to stay is Paradise Point Estates, a five-bedroom rental with direct access to Kailua Beach, frequently voted one of the best stretches of golden sand in the world.

Kick back in the private courtyard lagoon pool and hot tub while listening to the cascading tropical waterfalls. Local private chefs can be drafted in to cater to your every culinary whim, while the next-level security system ensures that high-profilers can sleep well at night. 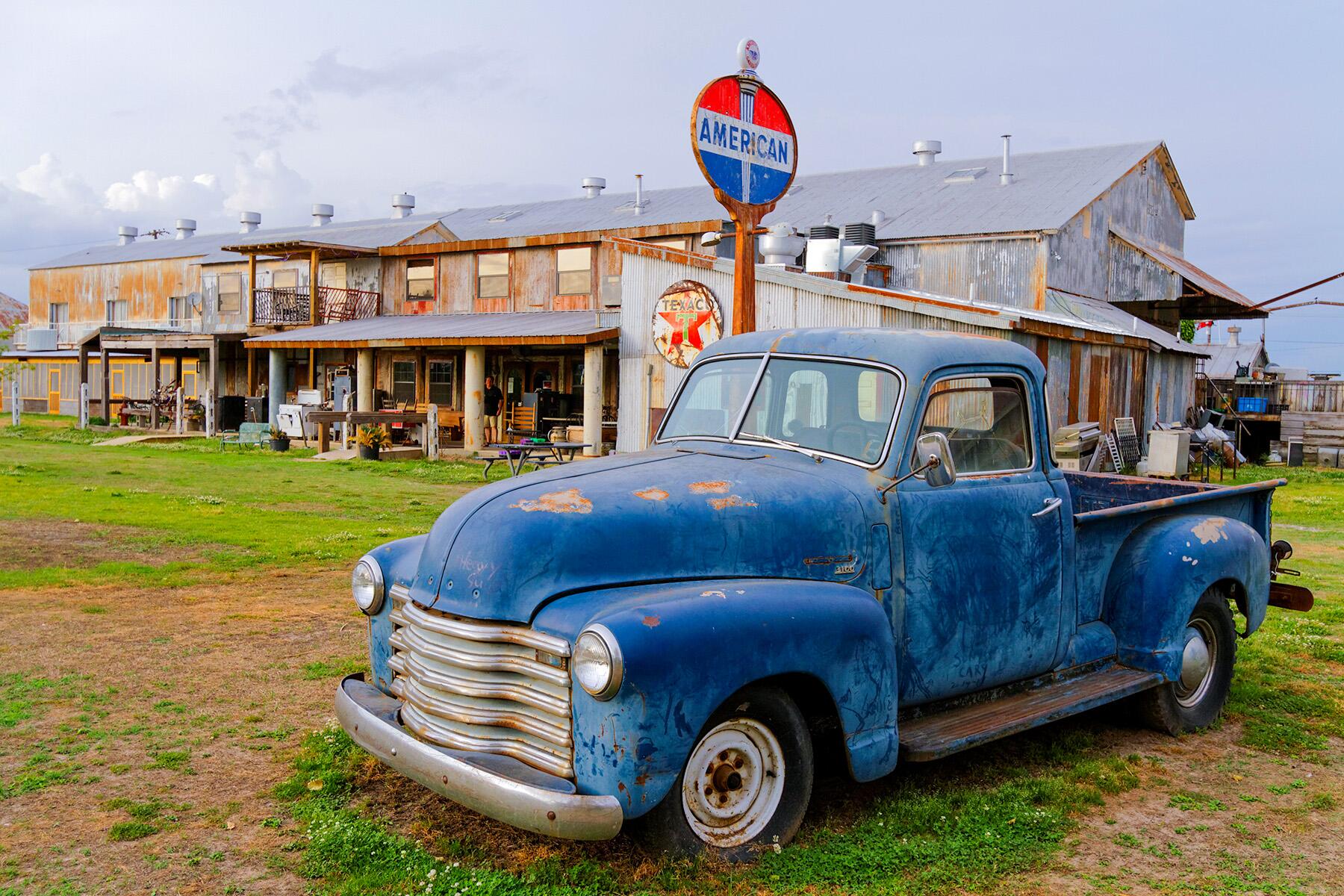 Stay at the Home of Renowned Blues Legend, Pinetop Perkins

Looking for a rootsy, down-home place to lay your head? Then head to the Mississippi Delta’s Shack Up Inn to discover a cluster of 30 shotgun shacks, rentable for the night.

Previous guests to this rustic inn have included Elvis Costello and Tom Waits, and the influential blues and rock and roll pianist Pinetop Perkins was once a permanent resident. Guests can now book into his shack, which includes an upright piano and a portrait of the Blues Hall of Fame inductee, smiling down from the wall.

Be sure to stop off at the onsite Ground Zero Blues Club, a juke joint co-owned by Morgan Freeman that’s frequently rated as America’s finest blues venue. The Devil’s Crossroads, where legend has it that musician Robert Johnson sold his soul to the devil for the ability to play guitar, is also just down the road.

INSIDER TIPBook your stay starting at $90 per night.