As “Immersive Van Gogh” takes the world by storm, step into a real Van Gogh painting at the sites in the Netherlands and France where the tormented artist painted his most famous works.

Poor Vincent. All he wanted to do was be an artist. But, despite his artistic prowess, he sold only one painting his entire life (The Red Vineyard). He was troubled, no doubt an alcoholic (he loved absinthe), and certifiably mentally unstable. So, what would he think if he knew that his paintings are among the most famous—and expensive—today? That an illuminated, multimedia extravaganza—the Immersive Van Gogh–based on his paintings is taking the world by storm?

There’s no doubt about it: His paintings continue to provide joy with their vibrant, happy colors and carefree brushstrokes. One of the most memorable ways to take all this in is to stand in the actual spots where he painted his most famous paintings—many of which look almost the same today. These are 10 places where Vincent’s paintings spring to life. 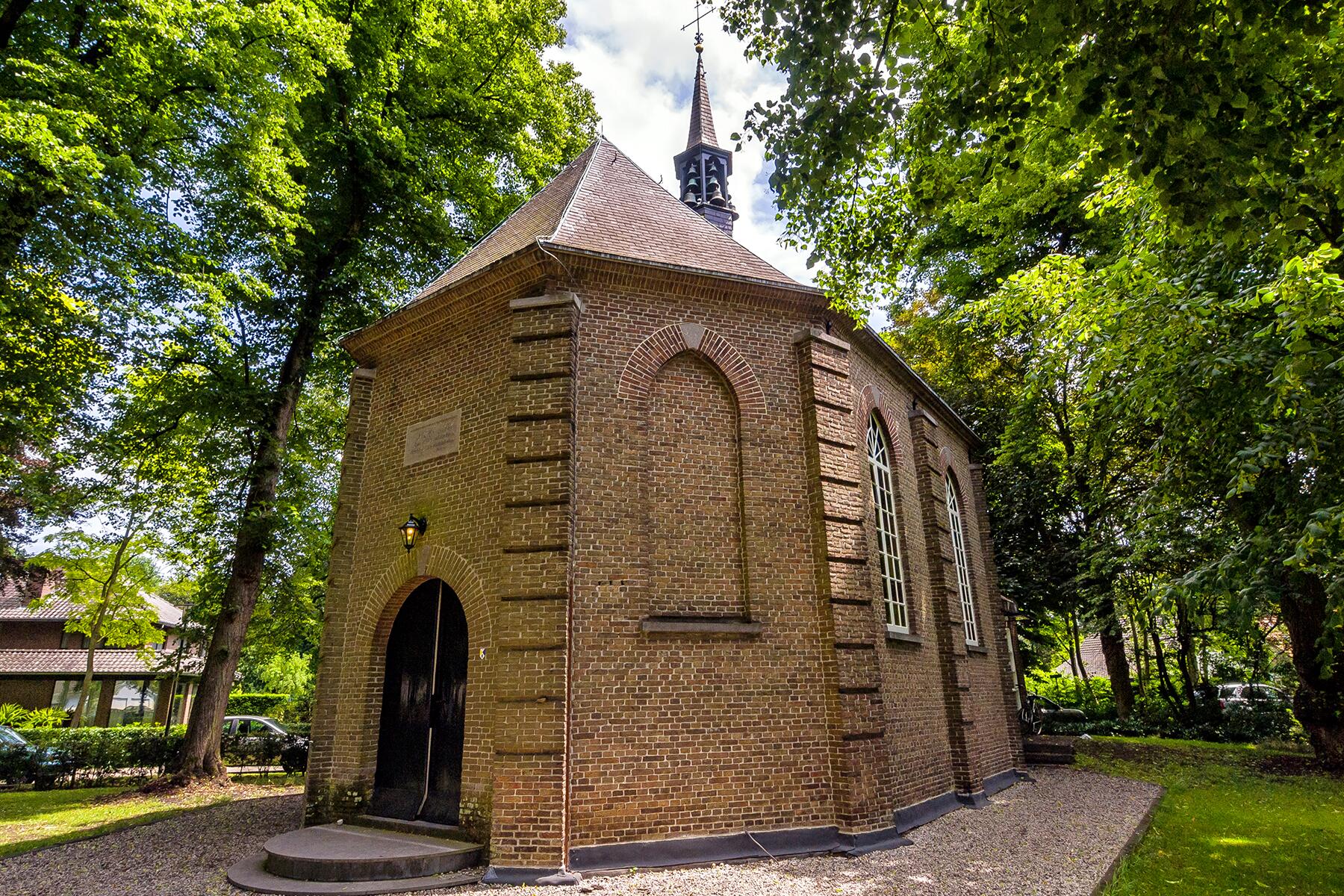 Vincent yearned his entire life to connect with others. With his father serving as the parson of the Dutch Reformed Church in Nuenen, the church was his natural entrée. He studied theology in Amsterdam in 1877…but flunked the entrance exam. He worked with an evangelical church in Belgium’s mine country…but the church authorities dismissed him for “undermining the dignity of the priesthood.” His offense? He had given up his house to a sick woman and moved into a miner’s shack. Always interested in art, he decided to preach through pictures. He painted his father’s church, the Reformed Church in Nuenen, for his mother when he was in his early thirties, demonstrating his original, dark dour palette.

Where to find it: The church still stands at Papenvoort 2 in Nuenen and is occasionally used by the Protestant church. Stop by the Vincentre in Nuenen where exhibits and photos show Vincent’s life in Nuenen between 1883 and 1885; a map identifies all the scenes he painted in town. To visit more van Gogh sites in the Netherlands, go here for more information. 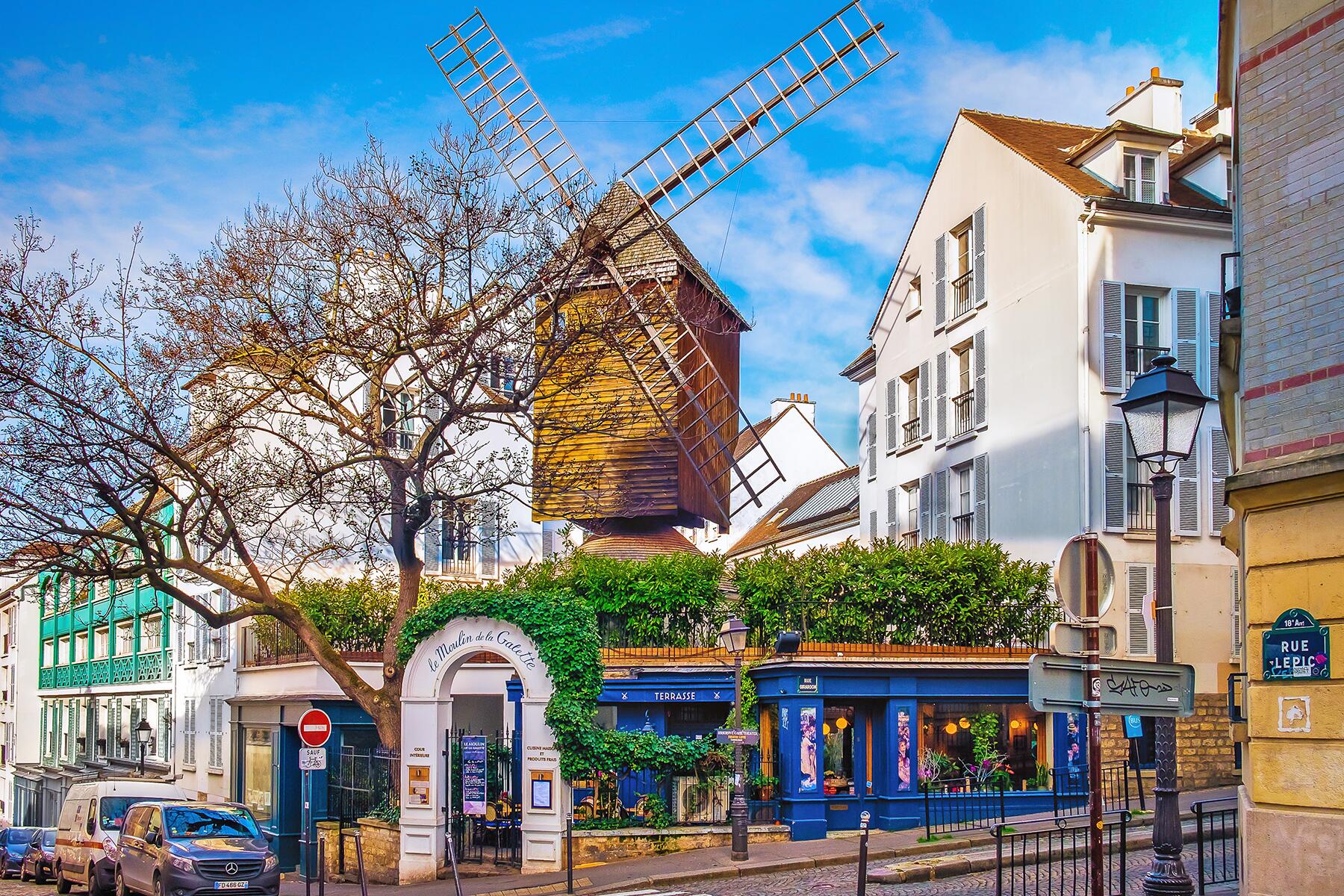 Vincent’s brother, Théo, an art dealer in Paris, told him about the art revolution going on—it was the dawning days of Impressionism. Vincent moved there immediately, in March 1886, living with his brother in Montmartre. Vincent became friends with the Impressionist gang, including Pissarro, Toulouse-Lautrec, and Gauguin, who introduced him to light and color, as well as the Japanese influence of block prints. He began to paint more simply, making each brushstroke count, and using brighter hues. Paintings during his Paris years include Le Moulin de la Galette, a windmill built in 1622 that still stands.

Where to find it: Le Moulin de la Galette stands near the top of Montmartre, at the corner of Girardon and Lepic Streets. It was restored in 1978 but is not running. You can glimpse it from rue Lepic. 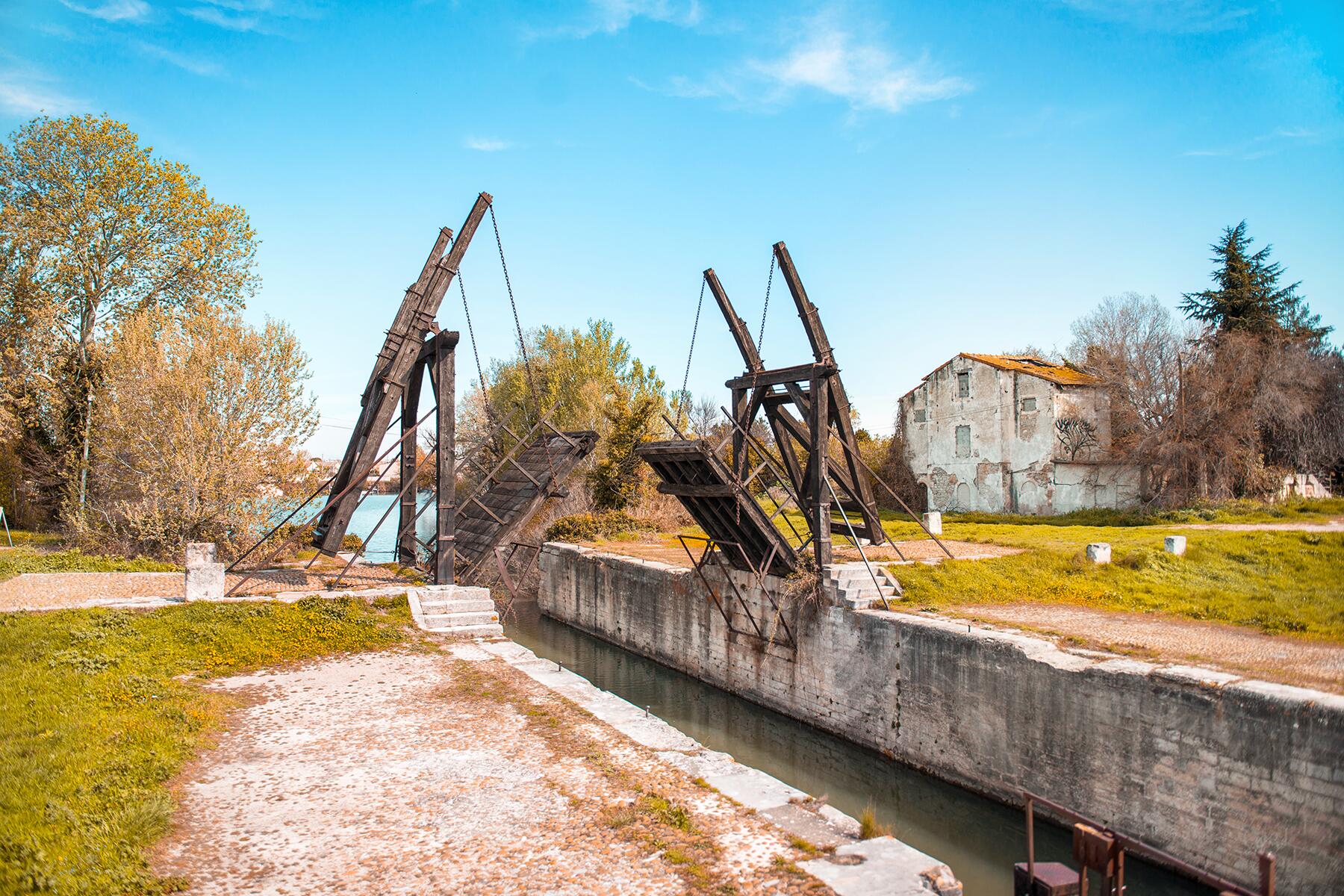 Toulouse-Lautrec told Vincent that the translucent sunlight in southern France resembled that of Japan’s. Vincent decided to move to Arles. “I may be going to the south of France, the land of blue tones and gay colors,” he wrote to his painter friend Horace Livens. When he arrived in April 1888, he found a depressing, dingy city in the throes of industrialism (he was drinking a lot, which no doubt added to his dejected mood). He became bedazzled by the strong sunlight, and he immersed himself, painting orchards and countryside scenes. His work grew bolder and even brighter in color. Three times he painted Langlois bridge, a little wooden drawbridge spanning the Canal d’Arles à Bouc, his use of contrasting blues and yellows revealing his mastery of complementary color.

Where to find it: The bridge was destroyed during World War II but has since been rebuilt and renamed “Van Gogh Bridge.” It’s located about a mile south of Arles off rue Gaspard Monge. 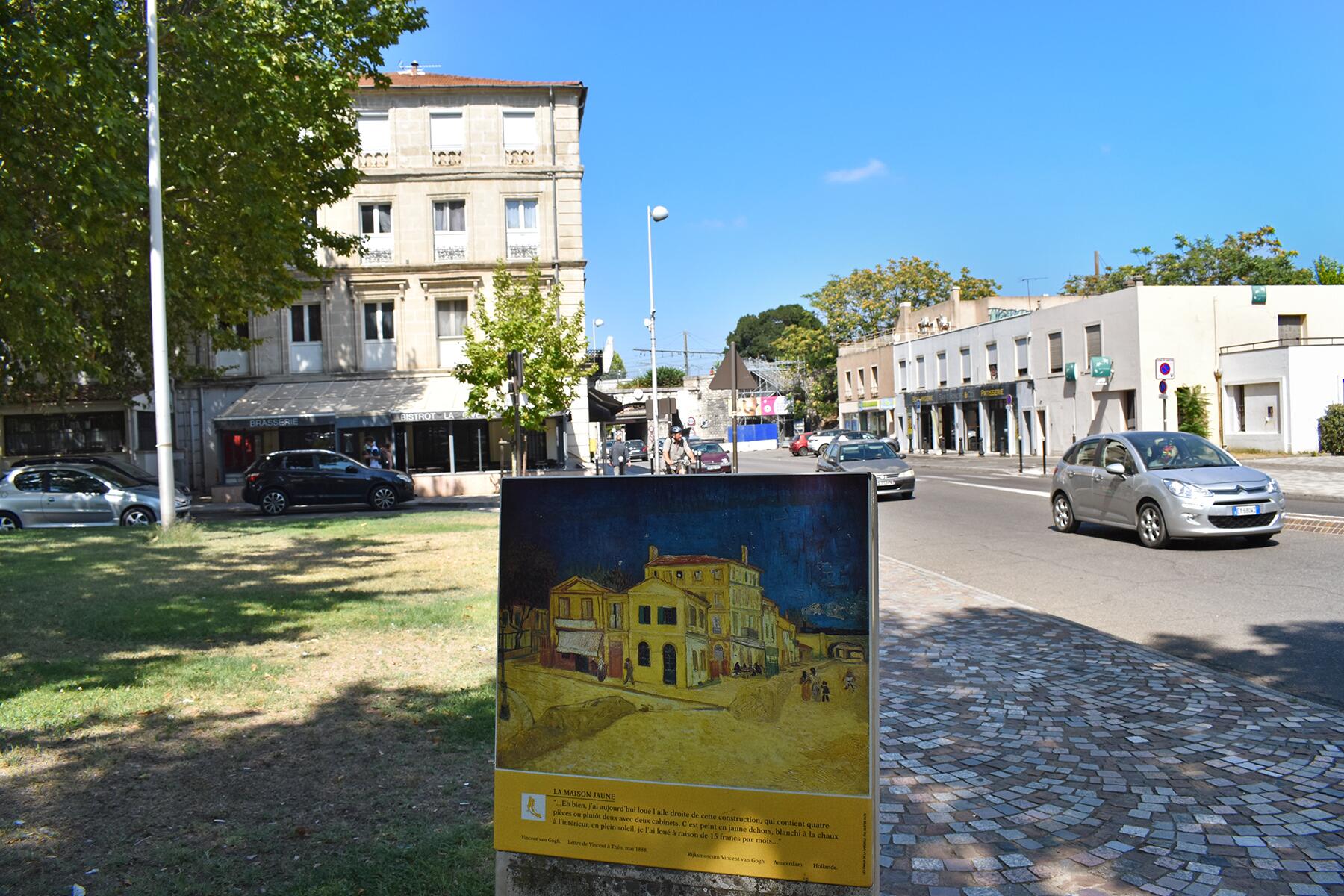 Vincent dreamt of establishing the Atelier du Midi, a utopian artist colony, and he found the perfect venue in the Yellow House on Place Lamartine in Arles, where he rented four rooms. He wanted his friend Gauguin to be part of it, who finally arrived in October 1888 (but only because Théo paid him to go, concerned about Vincent’s health). They painted together, and some of Vincent’s most famed works come from this time, including Café Terrace at Night, Sunflowers, Starry Night Over the Rhône, Bedroom in Arles, and The Yellow House. But the two artists’ differences in painting approaches created tension. Gauguin told Vincent to work from his imagination, while Vincent wanted to capture the essence of what he saw in front of them. Things exploded on December 23, 1888, when, in the middle of an argument, Gauguin walked out of the house.

Where to find it: The Yellow House, which stood at 2 Place Lamartine, was destroyed by a bombing in 1944. An information plaque and photo of the painting mark the spot. The Arles Office of Tourism has a walking tour of ten painting reproductions depicting the actual places where Vincent painted some of his most famous paintings. You can also take a guided tour to the sites through the Arles Office of Tourism. 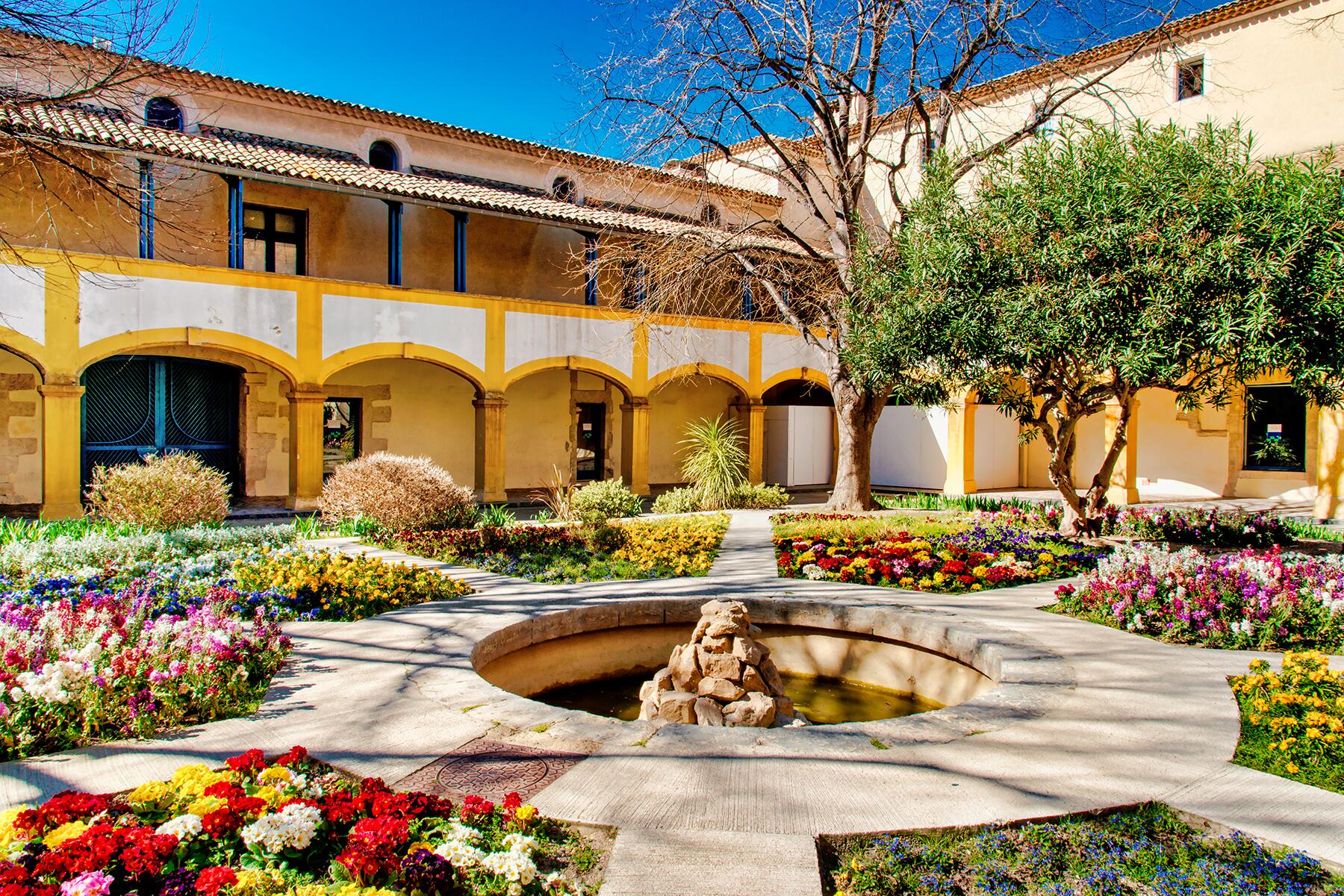 Garden of the Hospital in Arles

On that fateful, aforementioned night, Gauguin walked around for a while until he heard footsteps behind him. Vincent approached, holding an open razor. They stared at each other, then Vincent turned and returned to the house; Gauguin stayed at a hotel that night. The story goes that Vincent sliced off part of his ear lobe, wrapped it in a newspaper, and gave it to a prostitute named Rachel. He staggered home, where Gauguin later found him lying unconscious with his head covered in blood. He was taken to the Hôtel-Dieu (hospital), and Gauguin fled back to Paris. Vincent was in and out of the hospital for the next few months, being treated for mental illness. During this time, he painted the lush garden outside his hospital window.

Where to find it: The hospital building, at Place Félix Rey in Arles, now serves as the Éspace Van Gogh, with a library that houses exhibitions, a crêperie, and souvenir shops. The garden’s original layout has been preserved. 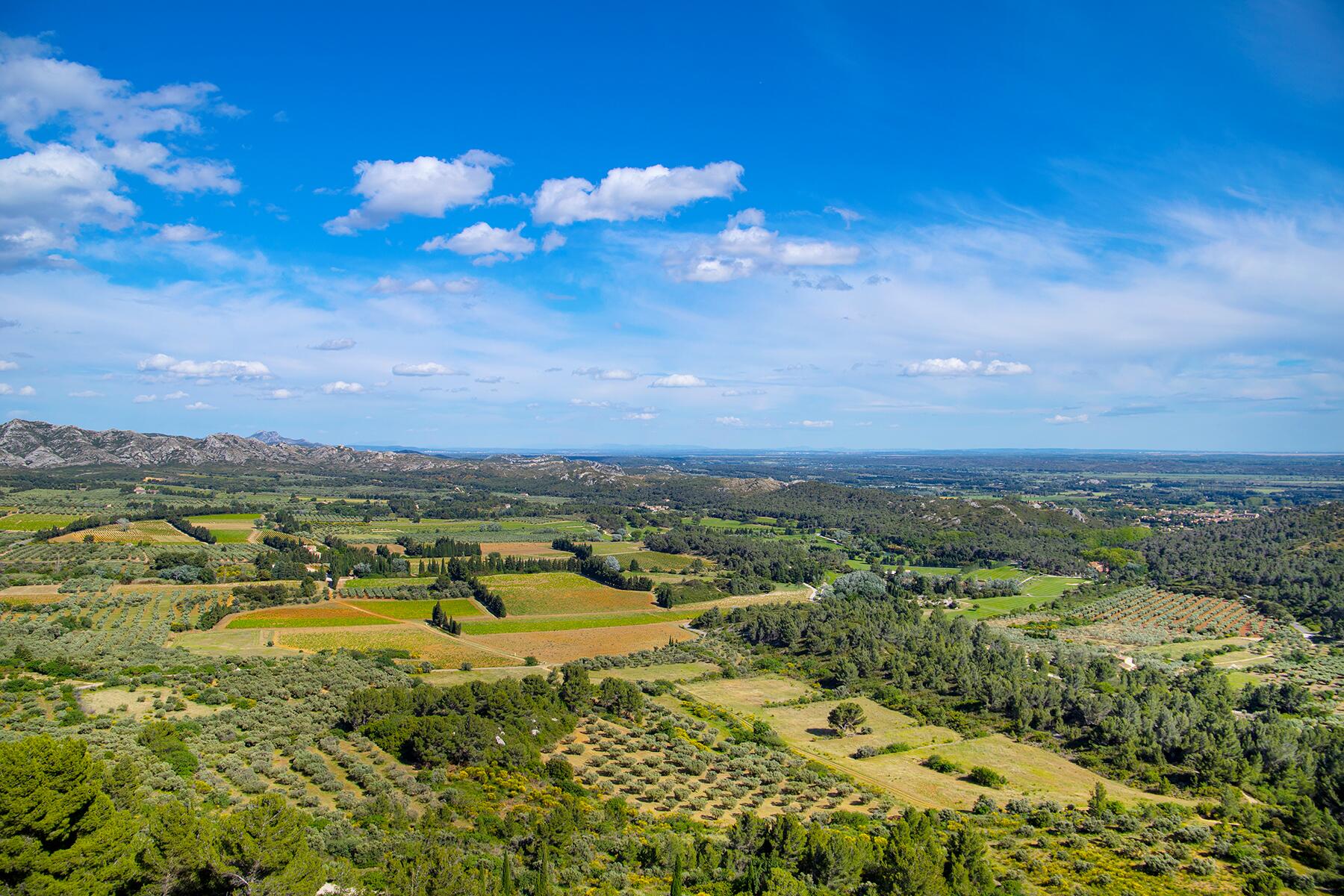 Anxious and concerned about his health, Vincent committed himself in May 1889 to the Saint-Paul-de-Mausole asylum in Saint-Rémy-de-Provence, a former monastery rising prettily above cornfields, vineyards, and olive trees in the Alpilles. He wrote his brother: “As a painter, I shall never amount to anything important now. I’m absolutely sure of it.” Little did he know that the frenzy of paintings that he created during this time, 142 in total, would become some of his most famous works. Cypress trees abound in these paintings, strong, dark verticals amid swirling golden fields, purple hills, and puffy clouds resembling fantasy shapes. He deemed Wheat Field With Cypresses, which he painted three times from memory, to be his best summer landscape.

Where to find it: Saint-Paul, south of St.-Rémy-de-Provence on Chemin St.-Paul, still operates as a psychiatric hospital, but a reconstruction of Vincent’s room is open to visitors, as is one wing that has been turned into a museum. Signposts with pictures of his paintings have been sprinkled around the grounds on the spots where he painted them. 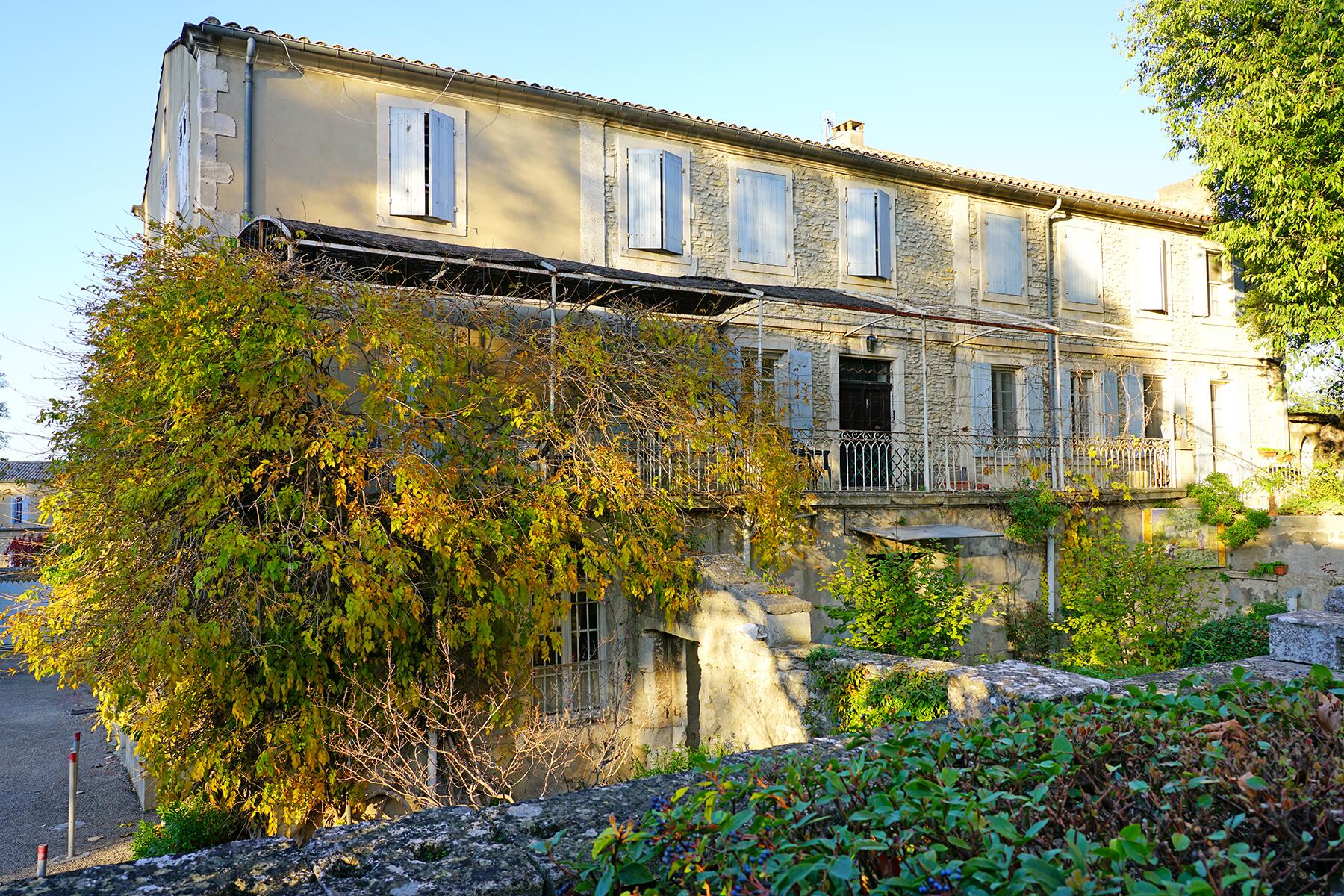 Vincent loved his window views at the St.-Rémy asylum, which inspired many paintings, including The Starry Night—inarguably his most famous painting ever. That said, he intertwined memories into the painting, as he often did; the church, for example, more resembles one from his Dutch homeland than St.-Rémy. He painted the scene after diving into a rabbit hole of depression and suicidal urges, and some say the churning sky represents his emotional turmoil. Interestingly, a study by Griffith Park Observatory shows that Vincent depicted the Moon, Venus, and several stars in the exact position they occupied that night. It’s possible he copied them from an astronomical drawing that he may have seen at the asylum’s library or in Paris. Either that or he’s a gifted astronomer in addition to being a gifted artist!

Where to find it: The view over St.-Rémy is inspired by Vincent’s window at St.-Paul-de-Mausole. 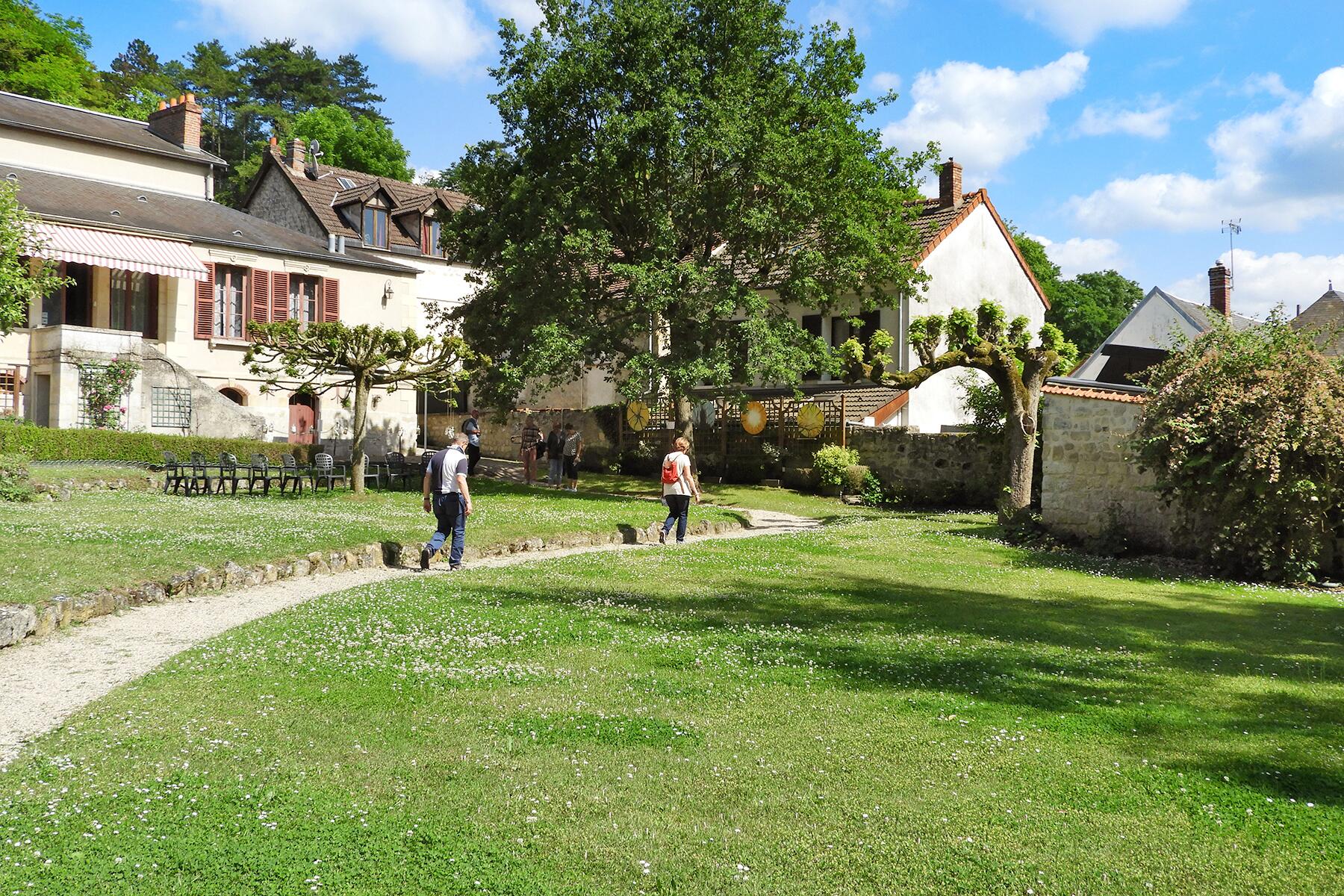 In May 1890, Vincent moved to Auvers-sur-Oise, a quiet, artsy village near Paris, to live and work. He wrote his brother Théo that Auvers is “gravely beautiful, it’s the heart of the countryside, distinctive and picturesque.” Once again, he entered a painting frenzy, creating 80 canvases and 64 sketches in 70 days, including several versions of painter Charles-François Daubigny’s garden, a landscape painter whom Vincent greatly admired.

Where to find it: Daubigny’s Garden is located at rue Daubigny 61, Auvers-sur-Oise. Signposts throughout Auvers depict the sites where Vincent (and other artists) painted his most famous paintings. 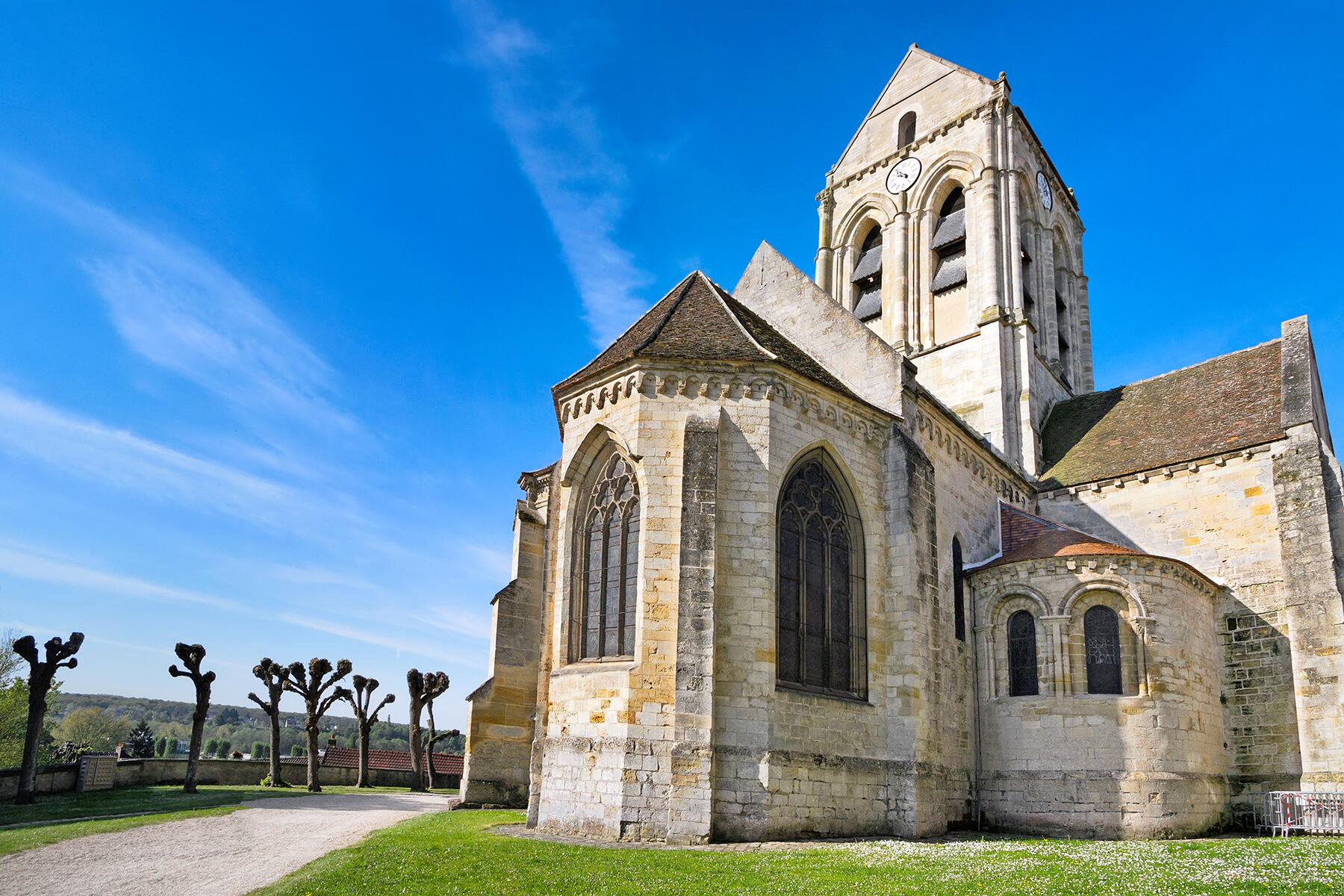 The Church at Auvers

Among the many countryside scenes in Auvers that he painted, Vincent was fixated by the 13th-century, Gothic-Romanesque village church, which he portrayed in violet and cobalt with touches of orange. It remains one of his most famous paintings. In some ways, it harks back to his earlier paintings of his father’s Nuenen church, updated with his modernist use of vibrant color and freewheeling brush strokes.

Where to find it: Eglise Notre-Dame de l’Assomption is located at rue de l’Église, in the east of Auvers. 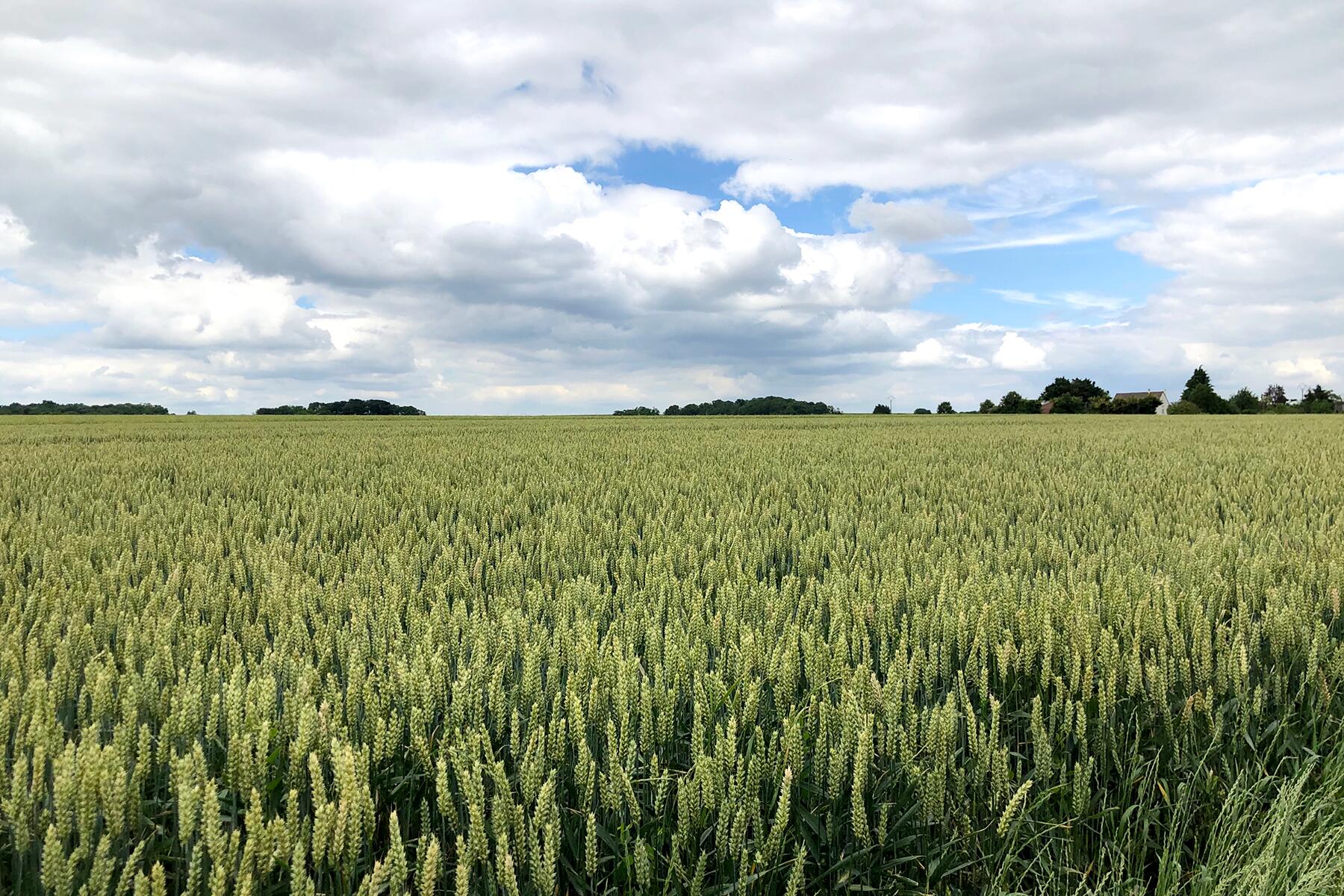 Vincent was drawn to the wheatfields above the town, which became several versions of Wheatfields With Crows. In hurried brushstrokes, he painted angry skies, sinister crows, and a dead-end path with a backdrop of wheatfields in what is generally acknowledged as his last series of paintings—and perhaps his death note. He wrote, “They are endless wheatfields under a cloudy sky, and I have not hesitated to attempt to express sadness and the deepest loneliness.” The crows might represent resurrection—or freedom, or bad luck and/or death, depending on whom you’re talking to. Perhaps all this was on his mind when, on July 27, 1890, at the age of 37, he allegedly shot himself at the edge of these very wheatfields. He dragged himself back to the inn where he was staying, dying two days later with his brother by his side. He’s buried at the village cemetery, alongside his brother Théo, who died six months later.

Where to find it: The village cemetery, just north of the town center, is surrounded by huge wheatfields. To see where Vincent painted, start at the cemetery and follow the path into the fields.