Rainbow merch for June is great, but here’s how Mickey could make the parks more magical and welcoming for LGBTQ+ guests every day of the year.

Walt Disney World walks a fine line to please all guests while not aggravating its core, often conservative fan base. In years past, June meant quietly rolling out a handful of rainbow t-shirts and keychains with a wink-wink vibe. Small signs with small fonts detailed the philanthropic annual donation of $100,000 to GLSEN, but as soon as June 30 became July 1, the signs were taken down and the same merchandise was dispersed and shuffled around gift shops as general rainbow gear. As a queer Disney fan, it often feels like Mickey takes one step forward and two steps back.

This year, Disney Parks debuted a massive collection of Pride merchandise that, for the first time in company history, features rainbow designs and logos from all four major brands under the mouse umbrella: Disney, Pixar, Marvel, and Star Wars. The Rainbow Disney Collection is an explosion of fun, queer merch and it’s not just rainbows. For the first time in park history, there’s a piece of merchandise—the iconic Mickey silhouette pin—with the transgender Pride flag, bisexual Pride flag, lesbian Pride flag, and the Philadelphia eight-stripe Pride flag which features a black and brown stripe for intersectionality with people of color and the LGBTQ+ community. The merch is cute (and I will get my hands on those rainbow Ewoks!) but what I really want to see in the parks is more services and more sensitivities for queer guests.

The new merch rollout arrived ahead of June, a month that (when there’s not a global pandemic) sees thousands of LGBTQ+ Disney fans at Walt Disney World for Disney Gay Days. With all the rainbow stuff to buy and limited-edition rainbow treats to eat, you almost forget the elephant in the parks: Disney doesn’t officially recognize Gay Days. Its neutral stance has come a long way though. In the early years of Gay Days, signs were posted at the entrance to Magic Kingdom alerting guests that a large number of homosexuals were inside the park. The tone softened and the signs eventually went away. But more than 25 years later, Disney World still turns a blind eye to a sea of Gay Days guests in red shirts taking group photos in front of Cinderella Castle. The bizarre irony is that, across the pond, you can actually attend a Disney Pride parade. In 2019, Disneyland Paris debuted a full-on queer production with Mickey and Minnie in rainbow outfits and LGBTQ+ celebrities such as Boy George riding on rainbow-clad floats. The event paused amid the pandemic, but is still listed on the park’s website and labeled explicitly “Pride.” It’s a reminder that what we see as American consumers is different than what park guests in other countries see. While Disneyland Paris is the most out and proud and vocal, you won’t see any Pride merch or philanthropic efforts mentioned at Shanghai Disneyland. 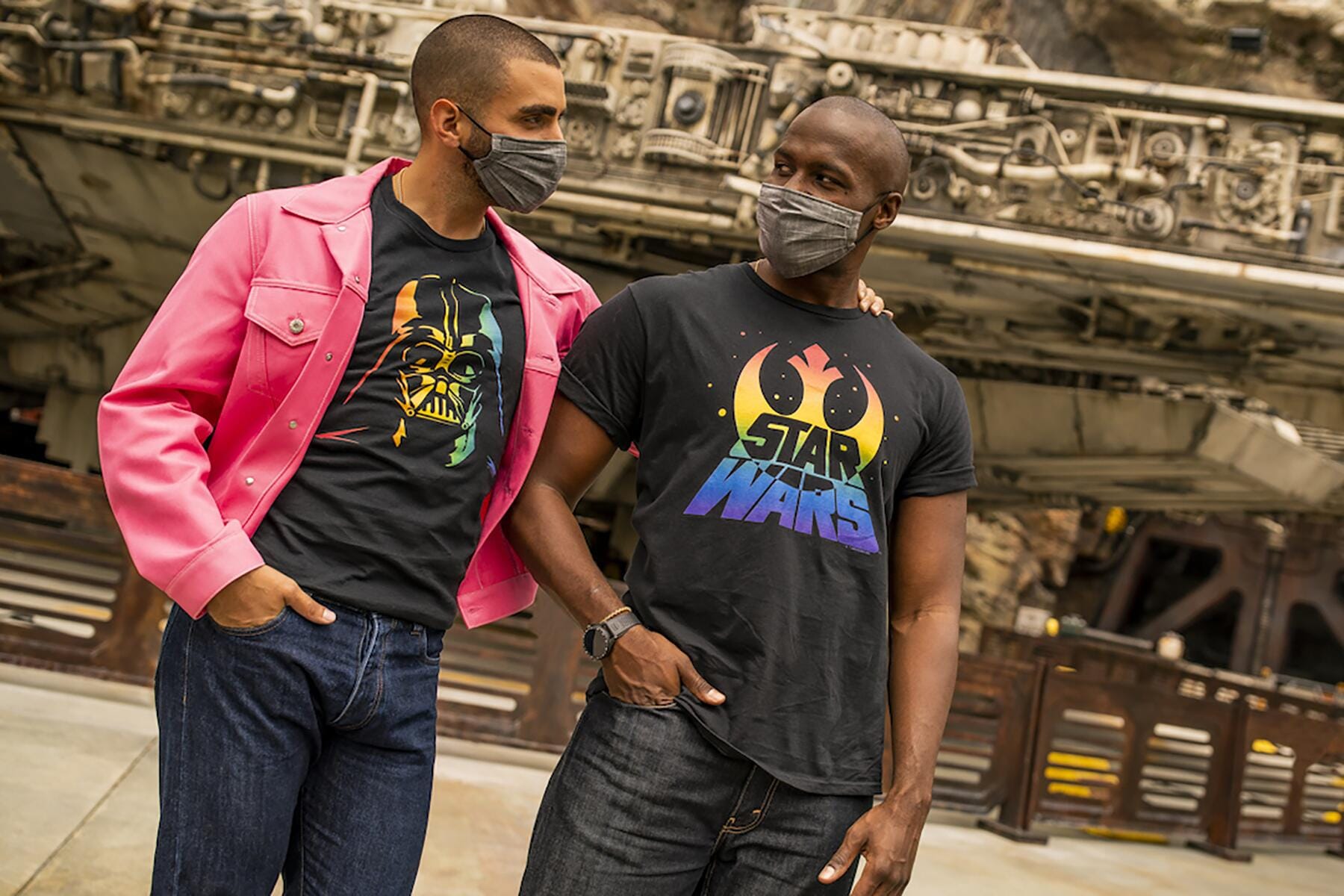 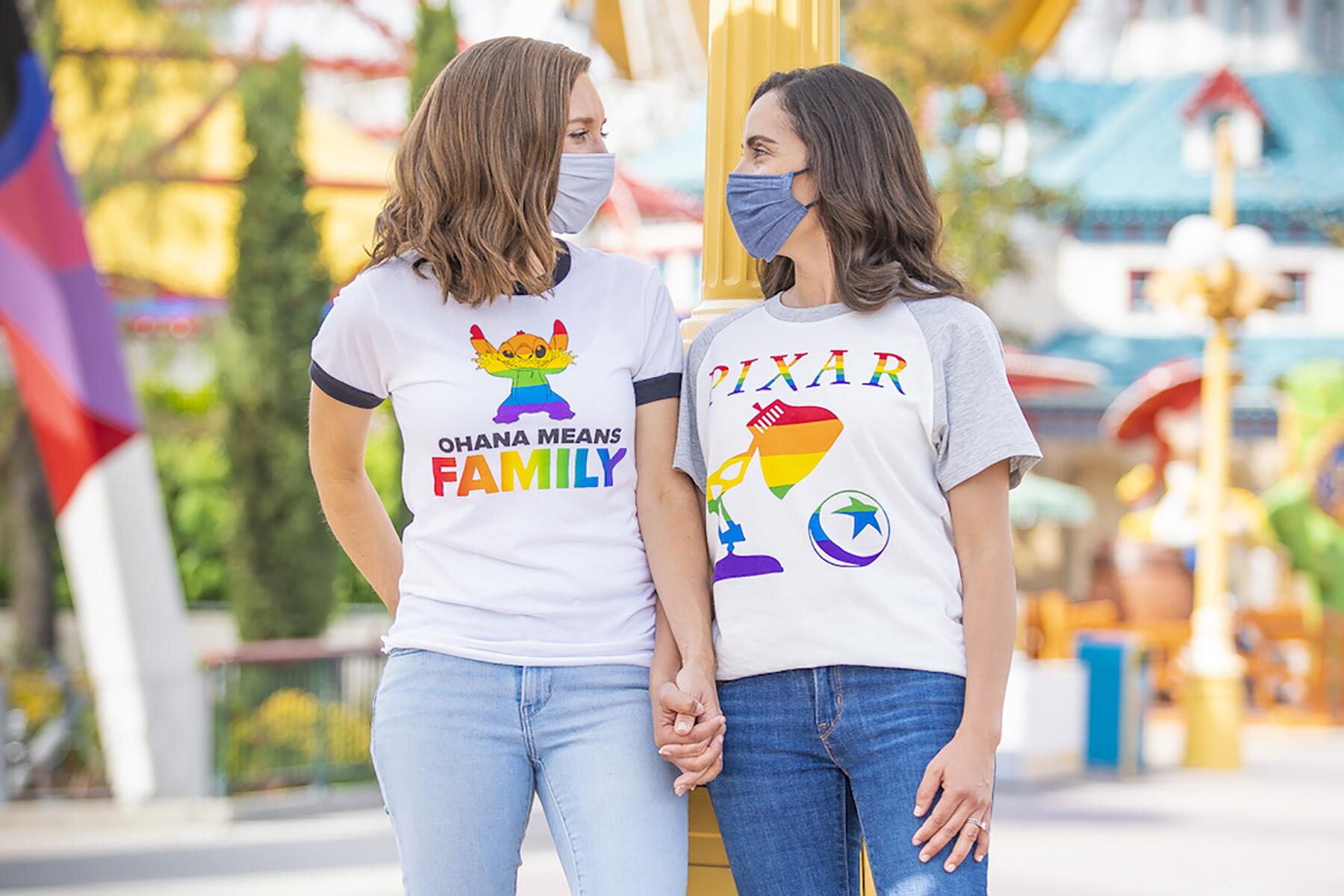 Stateside, however, Disney can’t shake this unspoken, closeted attitude. On the surface, Disney is queer-friendly. In terms of ranking safe vacation destinations, I’d say Disney World and Disneyland are some of the best places on Earth for same-sex couples to show PDA without fear, or walk around comfortably with kiddos and not worry about your family being openly mocked or bullied. For transgender kids and adults, Disney can be a joyous, gender-affirming experience. The parks are a safe place to express yourself and try new clothes or hairstyles away from classmates or people at home who might be cruel. For me, Disney Parks are cherished places to make positive memories. Half the magic is that I feel safe from being harassed; I can’t say the same for every country or even U.S. city my family has visited.

But acceptance aside, you can’t help but notice an overwhelming current of straight, cis-gendered theming throughout the parks, from parade dancers habitually paired as male-female couples to the plan Disney parks panel. This group of Disney ambassadors answer questions about the parks for Disney’s website and social media accounts. What’s cringey about the “diverse and knowledgeable panelists” is that not one of the 35 bios mentions LGBTQ+ families. In fact, there are no discussions at all for gay or transgender guests on the site. It’s not a good look.

If Disney is going to make money off the transgender flag, then Disney can recognize transgender guests and answer their questions when planning a theme park vacation. There are more than 50 entries on planDisney dedicated to “gender” reveal parties (which technically aren’t gender reveals but are actually sex reveals, which is just so creepy) and zero for transgender services. The most common question I get from transgender Disney fans on social media is whether or not Disney parks have unisex bathrooms. They do, but Disney doesn’t call them that. On a park map, these are labeled as either family bathrooms or companion-assisted restrooms, a bathroom with wide doors and larger square footage to accommodate wheelchairs and caregivers. These bathrooms are unisex, which is a big deal as some transgender people prefer to go to the bathroom with a buddy when traveling. Typically, this is a safety practice recommended when traveling in foreign countries, but some park guests might be more comfortable and less stressed to have the same option at Disney. So why isn’t there a transgender and nonbinary web page with this information for guests? 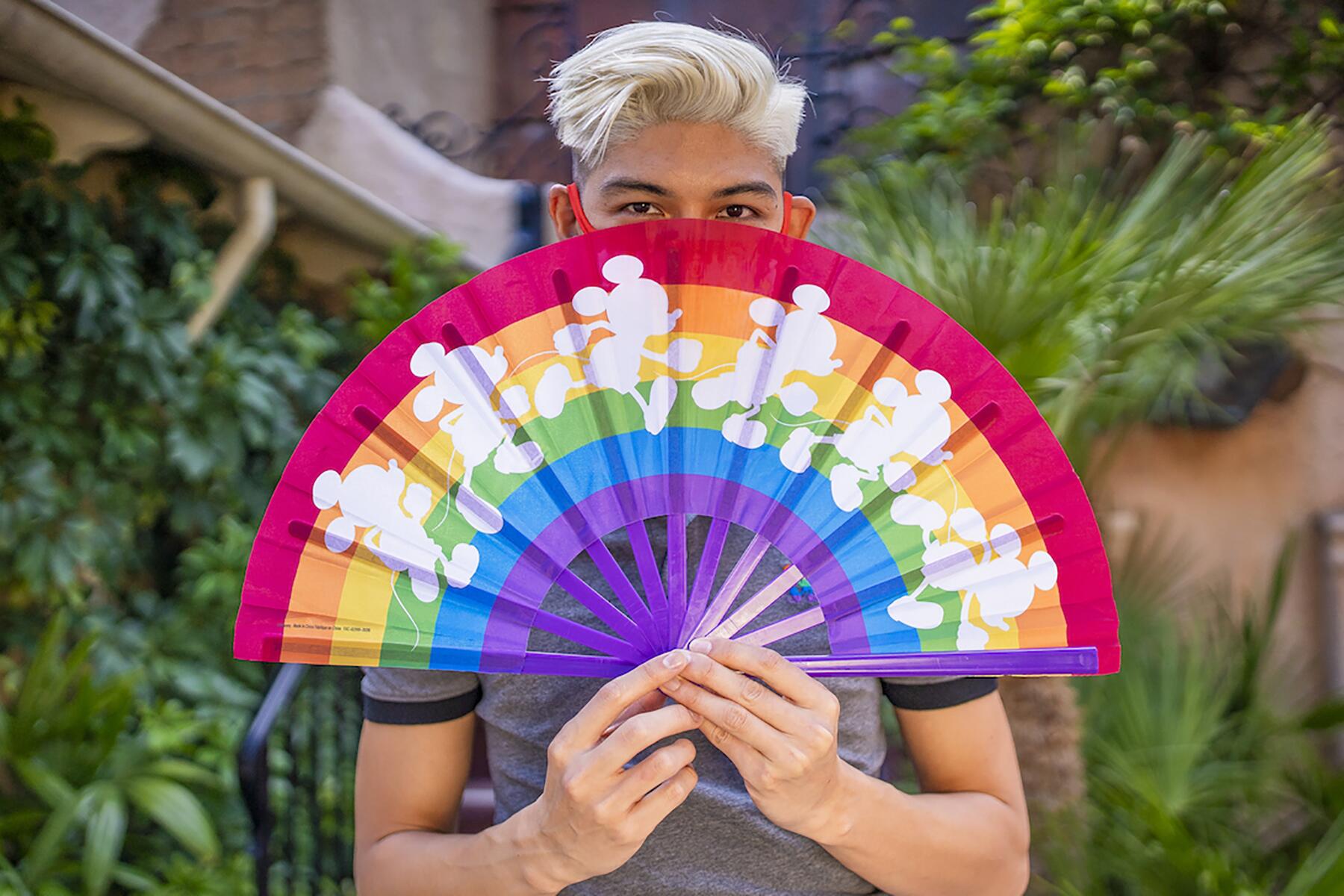 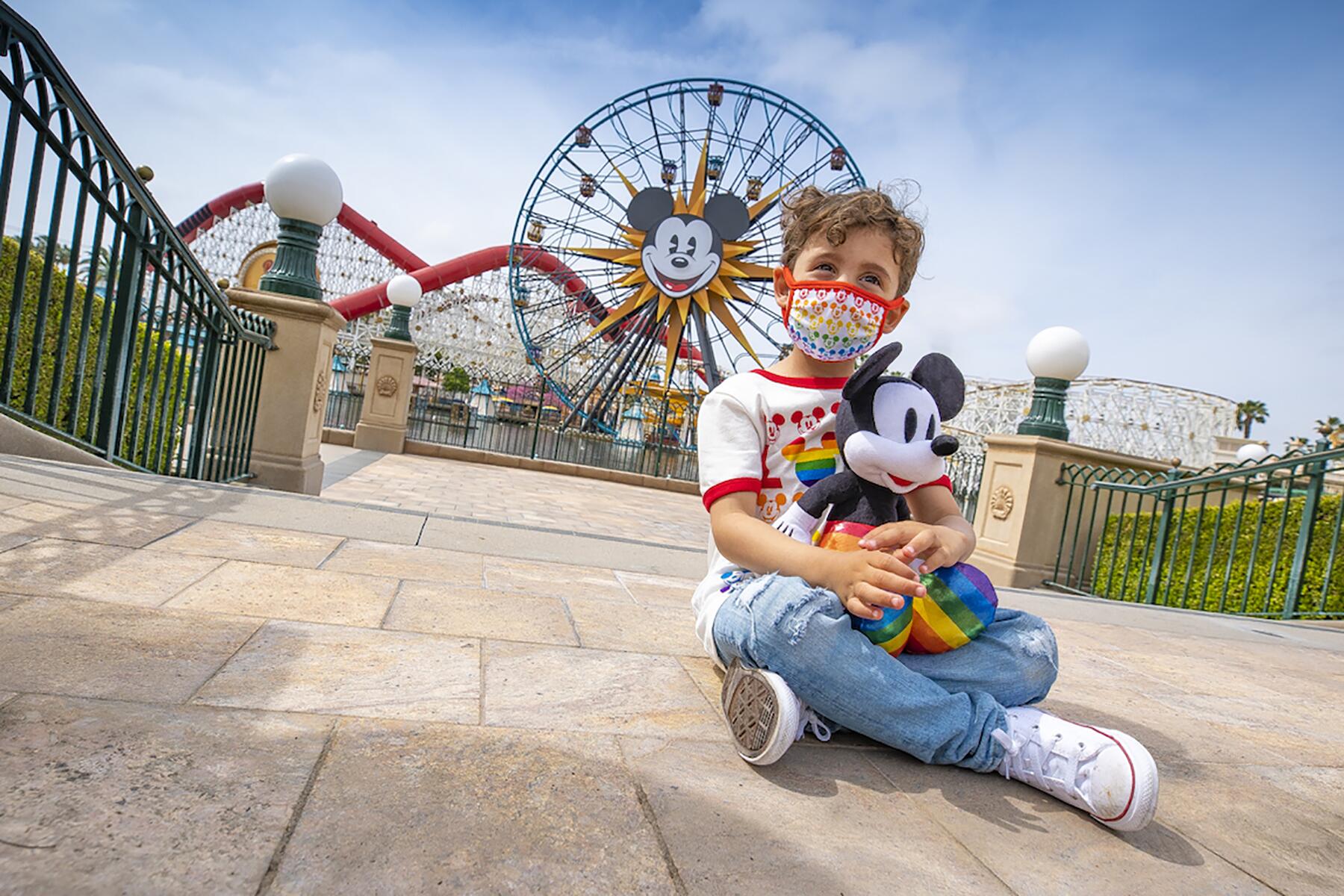 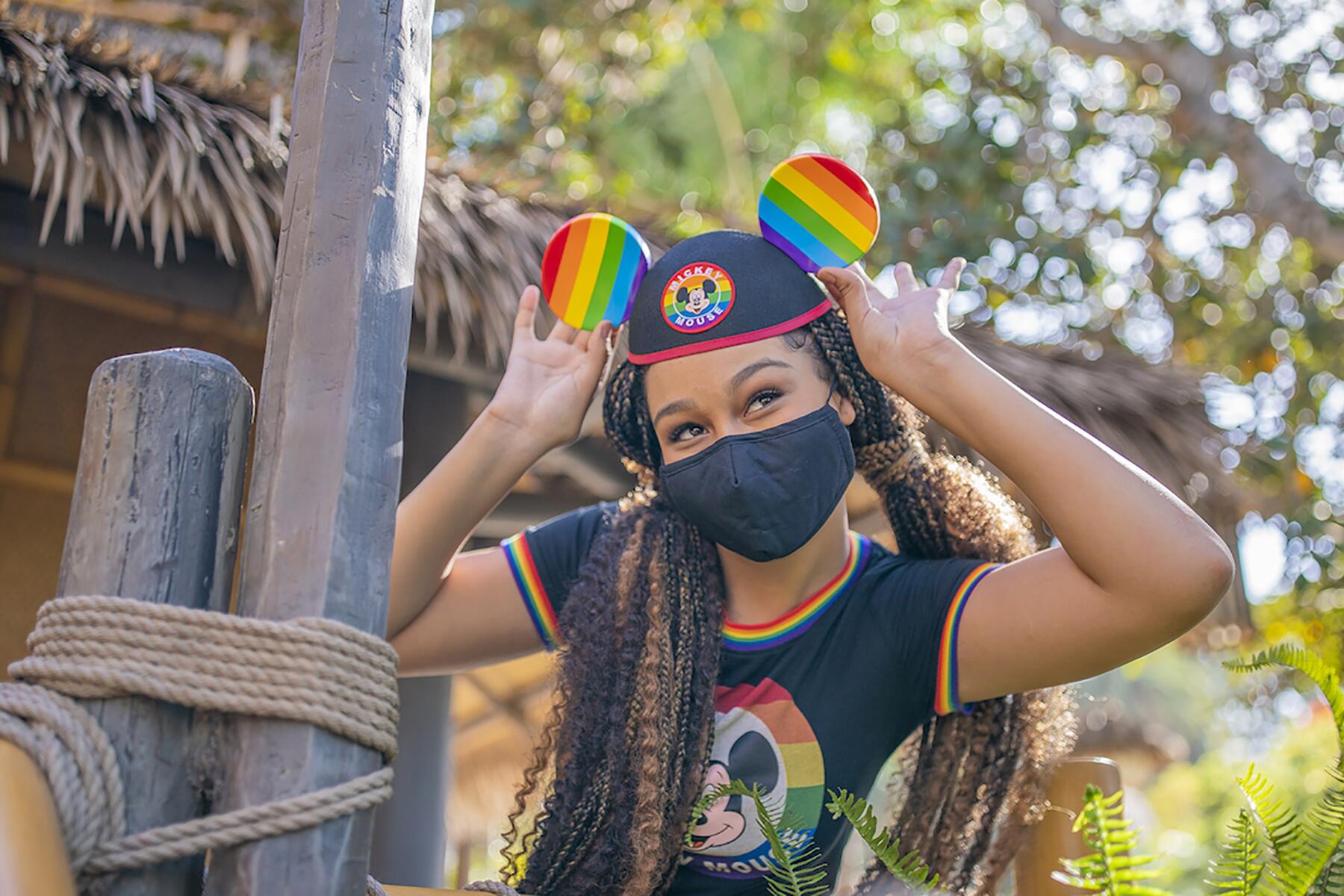 Gender casts a strange, unnecessary spell throughout the parks. You can’t ignore the overt prince and princess add-ons and merchandise. Though, Disney’s Bibbidi Bobbidi Boutique, a princess-themed salon where kids get a gallon of glitter hairspray shellacked in their hair until it forms a hard plastic bun for $100, welcomes little boys, too. And the Pirates League, a swash-buckling barbershop that draws facial hair on children accepts all would-be pirates. For non-binary guests, the Star Wars experiences and attractions are likely the most gender-neutral as they refer to kids as padawans or younglings like in the Star Wars universe. But it’s sad that you have to travel to a galaxy far, far away to escape the cis-gendered deluge. It’s a direct reflection of Disney’s lack of queer characters, movies, and TV shows, a.k.a. Disney’s intellectual property.

IP feeds everything in the parks, from rides to shows to character meet-and-greets to themed food. And because Disney has been so slow to produce stories with LGBTQ+ characters, there’s hardly anything to pull from. And from what little queer canon Walt Disney Imagineers (park designers and engineers) do have, they still end up botching representation.

As I mentioned in my recent timeline of problematic Disney attractions, EPCOT’s Beauty and the Beast Sing-Along has got to go. The way in which LeFou, a Disney-confirmed gay character, is treated on screen is not okay. The attraction, which debuted just before the pandemic, is a strange intertwining of existing storyline with new animation, and in one scene, LeFou is shown trying on Belle’s famous yellow dress and marveling at himself. He’s clearly enjoying the dress, but the tone and placement don’t feel positive. The whole bit is set up like a joke and he’s the punchline with his chest hair exposed and over-the-top gay trope lisp. Every time I have been in that theater—including a media screening—the audience laughs at this. And that hurts. It hurts for an audience to have that reaction and it hurts for Disney to think that kind of joke is okay.

It’s also shocking to see an attraction with insensitive content because, behind the scenes, Disney as a business is incredibly welcoming toward queer employees. The Walt Disney Company was one of the first major corporations in the U.S. to offer health insurance benefits for same-sex couples. And, historically, Corporate Mickey has sponsored tons of Pride parades and events in the L.A./Anaheim and Orlando areas. Disney has even helped pay for the fireworks at Orlando’s Come Out With Pride event, even though Disney won’t throw a queer firework bash in their own Florida parks.

But there seems to be new momentum at the executive level. Recently-promoted leaders such as Josh D’amaro, Chairman of Disney Parks, Experiences and Products, are making big changes. Disney’s company tenets now include a fifth key of inclusion for Cast Members. The additional key was announced in tandem with changes to Cast Member dress code. Now, Cast Members can display tattoos and painted nails, wear double ear piercings, and have less strict (and heavily-gendered) rules concerning hair length and facial hair. And when the Disney College Program returns, there will be gender-neutral dorm options. Backstage Disney totally gets it, but I don’t see that same inclusive key echoed on stage and in the parks just yet.