News Ronny Maye Should You Cancel Your Vacation to an Area Impacted by a Natural Disaster?
Marius Dobilas/Shutterstock

OCD is unwanted luggage, undetectable to any security scanner, that I am forced to bring everywhere I travel.

These shouts weren’t hailing from me, but the taxi drivers trying to snag a customer at Costa Rica’s San José International Airport.

To find my hostel’s hired driver, whose face and car were unknown to me, I forced myself to investigate each and every one of the determined taxi drivers’ held signs.

Many minutes ticked by before I realized that my driver wasn’t on time. Yearning for a quick break from the boisterous crowd, I asked an airport security officer, “Where’s the bathroom?”

She gestured with her hand towards a tall column across the street with a door at its base. “It’s over there.”

“All right, thanks,” I replied. But then I was stopped in my tracks. What if my driver arrived while I was in the bathroom and couldn’t find me?

So, I continued to linger nearby the taxi commotion, which didn’t last long. The officer who had before given me directions honed in on me with crossed eyebrows. Pointing to the column, she said, “The bathroom is over there!”

Her upset spilled out over me. “But it’s over there!!”

Lady, I’ll go if it means you’ll stop minding my business. “Okay,” I said as I followed through with her original answer to my question, which she turned into a command.

My mind’s social anxiety and obsessive-compulsive disorder (OCD) instigated thoughts. Geez, she was so attentive, Meggie. Why was she watching you closely? Did you stand out? Was it so illegal to change your mind and not follow her directions?

As a traveler, airport security triggers my OCD and social anxiety, both of which can complement each other like dear friends.

Roughly three months later, I was on the other side of the Atlantic Ocean at Charles de Gaulle Airport in Paris. While moving through the jetway leading to my plane, I snapped photos for fun.

At the jetway’s end, a security officer stood in my way. “Miss, you shouldn’t be taking photos here.” Then, he spelled out dire consequences. To this day, I can’t exactly remember what they were because a flurrying snowstorm had begun in my brain, trying to freeze me into panic mode. Something like spending thousands of dollars in fines? Or extending my European summer vacation with a stay in a Parisian slammer?

Despite my fraught mind, I managed to delete the photos and show the officer my empty album. Then, he stepped aside.

Still, my hyperactive brain told me, You were that close to committing a crime! Your innocence was nearly tainted!

Many people misunderstand OCD, pigeonholing it as nothing more than a need to align items on the table or be clean from germs. In reality, OCD thought content varies from person to person.

As a traveler, airport security triggers my OCD and social anxiety, both of which can complement each other like dear friends. While my OCD dwells on my law-abiding reputation, my social anxiety makes me feel like eyeballs are targeting me and finding ways to criticize me.

Whenever I am at the airport, especially around security, my mind crafts irrational slippery slope narratives, building up my anxiety and self-consciousness. I’m left feeling like a criminal on the INTERPOL wanted list.

As a security officer checks my identification documents, I am waiting for them to find something amiss. What if a crime populated on your records by accident? OCD says to me. While my luggage passes through the security scanning machine, I am waiting for alarms to ring. What if you left your pocketknife in there? If an officer starts a conversation or asks me a question, I am waiting for my responses to warrant further investigation. What if you accidentally said a bad word?

All these false, exaggerated narratives fixate on certain images: The officers pull me out of the public and into a little room for interrogation. They find a reason to imprison me in a different state or country with no way out. Forget about trying to rebound from a ruined record! The final image—I will have no future—is my OCD’s fear. OCD wants to be so certain of my flawless reputation that it overreacts.

When OCD thoughts come, I apply treatments that I’ve learned from my therapist, such as relabeling the thoughts as OCD and accepting the uncertainties of life. But recently, I read the book Fear by Vietnamese Zen Buddhist, Thich Nhat Hanh, which helped me burrow out of the dark depths of my OCD’s illusions about airport security.

Airports are tense places where the worst is feared. A security line here, a question there, ID checks everywhere. Officers examine every airport traveler (hey, it’s not just me)! Everyone’s identity and materials are subject to intense scrutiny. Even peaceful Buddhist monks are suspect. I once saw a security officer scanning the robes of a monk and delving through his belongings.

As part of the job, security officers must be alert and on guard. They are scared too, I tell myself. It’s not just me.

And then I remember what happened at Honolulu International Airport in January 2018.

The humdrum morning escalated into turmoil when phones buzzed with a statewide emergency alert, screaming in silence, “BALLISTIC MISSILE THREAT INBOUND TO HAWAII. SEEK IMMEDIATE SHELTER. THIS IS NOT A DRILL.”

Remaining surprisingly calm, I asked a beefy security officer where we should seek shelter. But he kept turning away from me. He was spending his last breathing moments to say “I love you” to his family on the phone before total obliteration. His faltering voice collapsing with the weight of an untimely death.

It took too long—38 terrifying minutes—for Hawaii to broadcast another alert saying that no missile was coming. The previous alert was a false, accidental alarm. 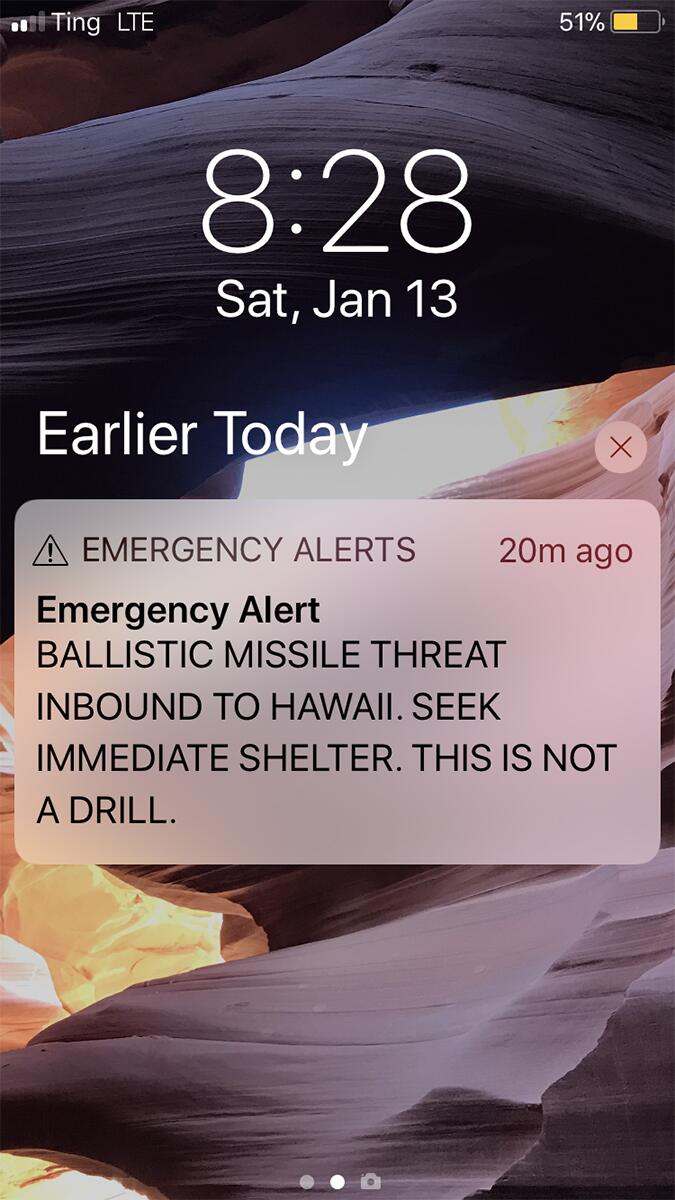 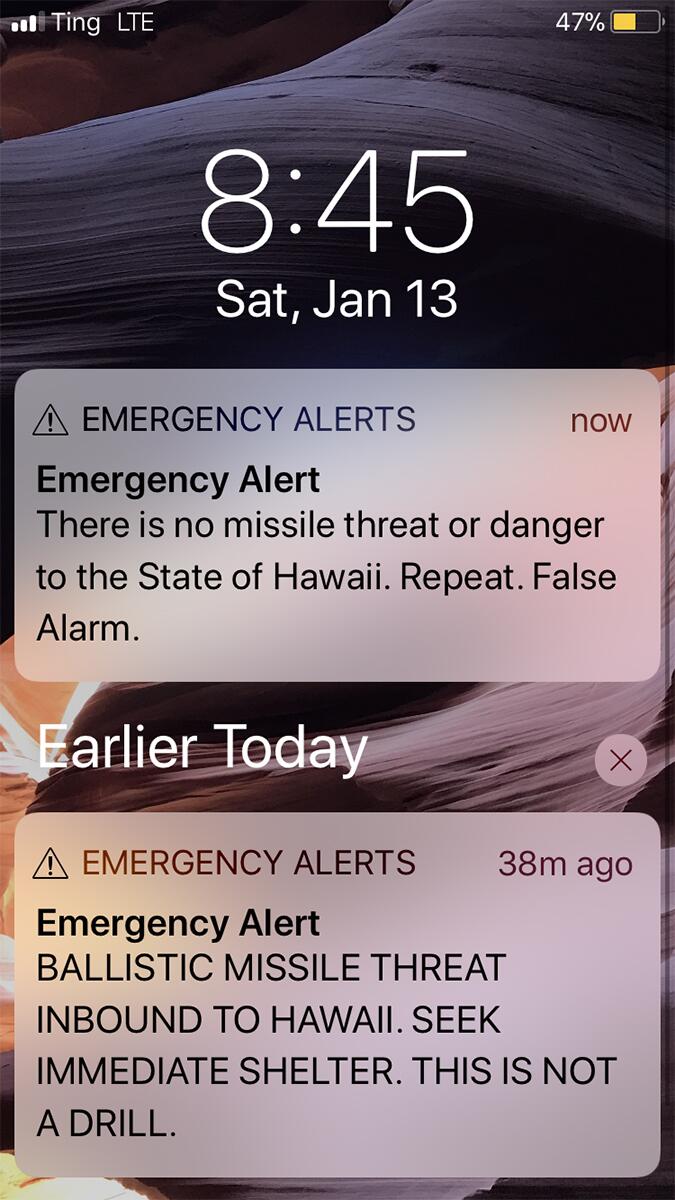 1. This is not a drill!Meggie Tran 2. Just kidding, false alarm!

Inevitable death had unpeeled the security officer’s macho outer layer. I found a real person with a beating heart underneath, not a robot targeting me. That man had a family and a life outside of his job. And so did the officers in Costa Rica and Paris.

Rather than let the lifelong lies of my OCD scare me away from traveling, I will transform them into an opportunity to embrace the uncertainties of life.

I live by this TV show quote from the lion turtle character in Avatar: The Last Airbender: “The true mind can weather all the lies and illusions without being lost.”

Rather than let the lifelong lies of my OCD scare me away from traveling, I will transform them into an opportunity to embrace the uncertainties of life. Will a security officer inspect my baggage or ask me extra questions the next time I fly? Will I be a suspect? By accepting these uncertainties, I can live based on my wants and needs, not OCD’s. And so, I continue to travel despite my OCD’s nagging voice and anxiety.

To encourage my efforts, I sought a wiser understanding of society and our world. And Honolulu ensured that I wouldn’t ever forget that security officers are also just humans doing their jobs.

It helps knowing that there are some airports taking an extra step in travel accessibility. Travelers with hidden disabilities, physical or mental, can wear a sunflower lanyard to let airport staff know that they may need accommodations.

Yet another sign that airport staff aren’t as scary as my OCD makes them.