Etihad is launching ultra-long-haul routes to JFK and Chicago this summer on its new Airbus 350-1000s.

Air travel is back with a bang—along with canceled flights, crowded airports, and all the other hassles that have recently plagued passengers. But if you’re headed to the Middle East (or traveling through it on a layover), you can avoid some of those headaches by booking your own business-class suite, complete with a fully lie-flat bed and a sliding door, plus a speedier trip through airport security and swanky lounge access.

This March, Etihad Airways launched the first of its five A350-1000s, including a redesigned business class product highly anticipated in AV geek circles. On a special inaugural flight from Abu Dhabi to Paris, culminating in a splashy press conference at Charles de Gaulle, travelers got a taste of the new product. Starting last month, travelers can book direct flights to Dubai as the carrier launches ultra-long-haul service on the A350-1000 from its home base in Abu Dhabi to JFK and Chicago O’Hare.

We found flights from Chicago starting at $2,559 one-way in late August, which breaks down to about $182 per hour over the approximately 14-hour flight (and even less when you factor in access to those aforementioned swanky lounges). Plus, your business class ticket also includes two free bags, priority security and boarding, and an onboard experience that’s among the most luxe in the industry—making this a splurge that delivers considerable bang for the buck. And if a business-class ticket isn’t within budget, Etihad’s economy experience on the A350-1000 is nothing to sneeze at.

What to Expect on Etihad’s New A350 Business Class

Stepping into the A350-1000’s business class feels a bit like walking into a spa, with its spacious interiors, soothing, neutral tones, and luxe ambiance. The 44 business class suites are arranged in a 1-2-1 configuration, enabling aisle access for every seat. But the first thing some passengers may notice is the lack of overhead bins above the middle row and its soaring ceilings. According to Etihad, they’re the highest in the industry at nearly eight feet–a thoughtful design choice that’s especially welcome on those ultra-long-haul flights.

Individual suites by Collins Super Diamond, which also appear in the new British Airways Club Suite as well as Qatar’s A350, reflect a blend of high style and comfort, starting with the sliding door that pulls shut for the ultimate sense of privacy. Seats expand into 79-inch, fully lie-flat beds with a pillow and cozy comforter, guaranteeing some shut-eye. On the entertainment side, there’s an 18.5-inch screen and a head-spinning array of choices for movies, live television, and even digital magazines (all of which perfectly complement that expandable seat).

Other amenities and extras include a spacious tray table, a wireless charging pad, an Acqua di Parma amenity kit, and dining offerings, including an “Anytime Meal” service on par with Etihad’s high-quality food and beverage program. 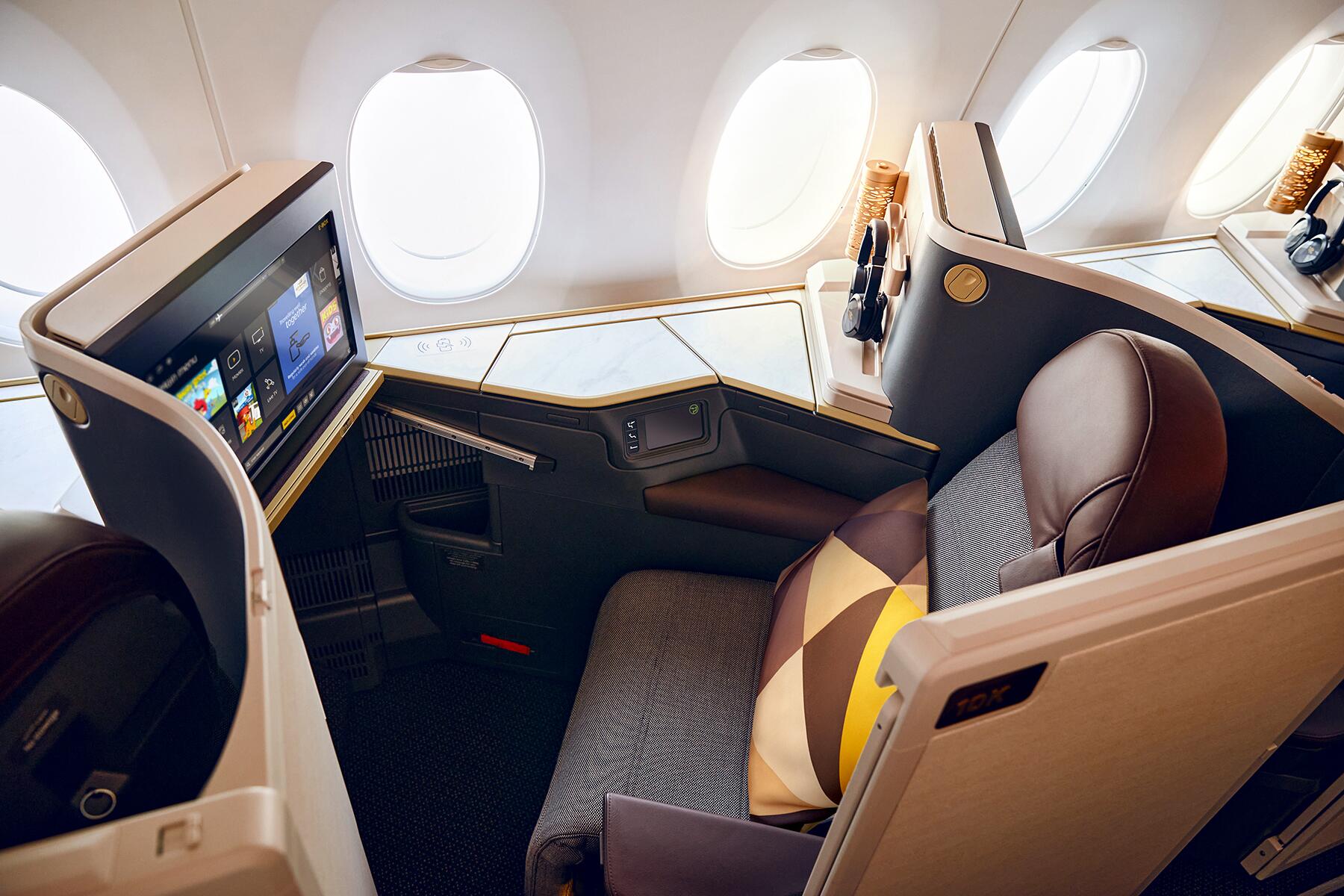 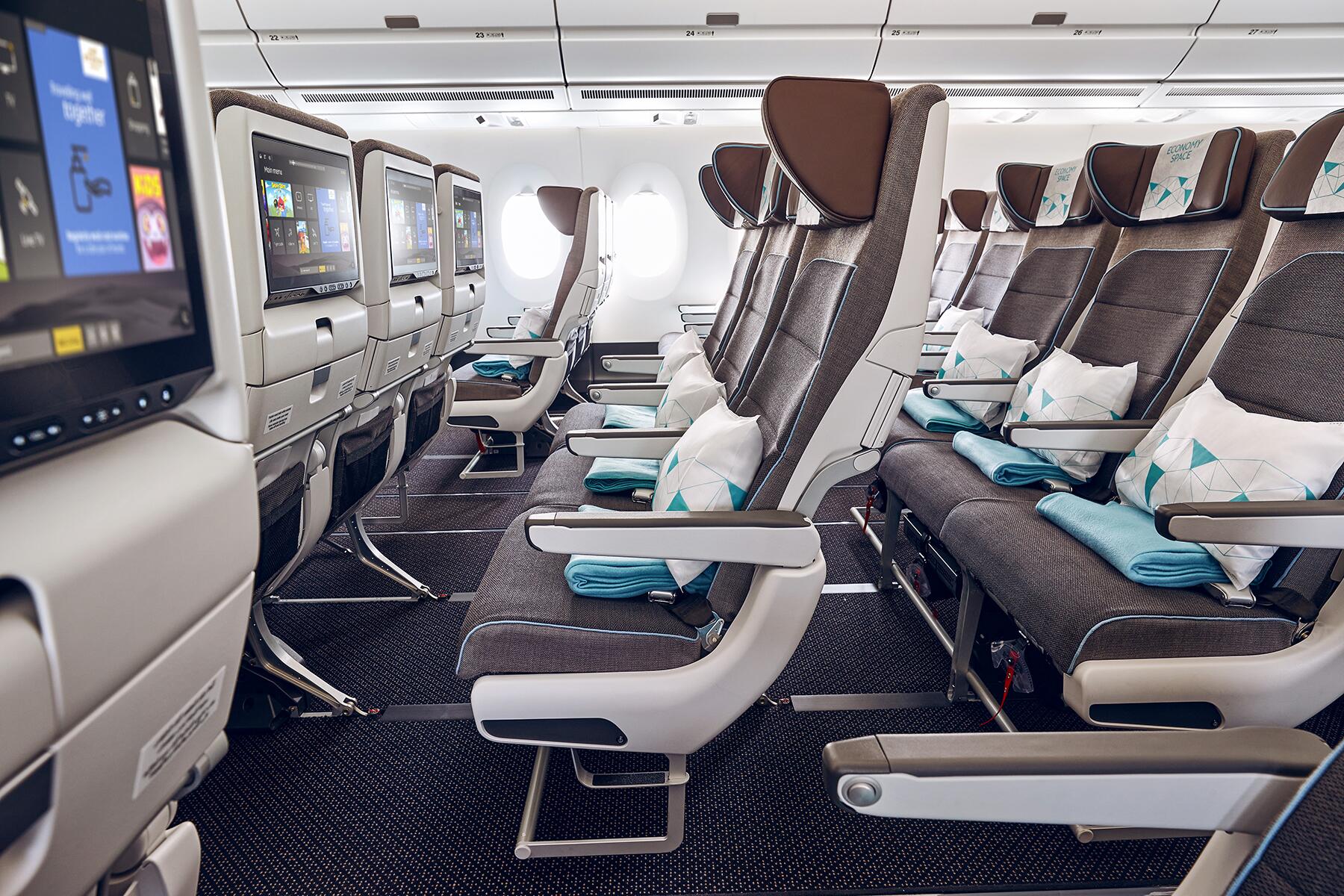 What to Expect on Etihad’s New A350 Economy Class

Etihad’s economy cabin also received an upgrade on the A350-1000. The cabin’s 327 ergonomically designed seats are configured in a 3-3-3 arrangement, and fliers who want some extra space to stretch out will appreciate the four additional inches of legroom in 45 seats that are designated as “Economy Space.”

Every seat has a 13.3-inch screen, USB charging, and Bluetooth connectivity. Etihad’s signature supportive headrest, which features a wing design and adjusts up and down, is another nice touch.

Not only is Etihad’s A350-1000 one of the snazziest commercial aircraft in the skies, it’s a leader in sustainability, with a carbon footprint that’s significantly reduced from previous generation aircraft. The A350-1000 features 25 percent less fuel burn and 50 percent reduction in noise–the latter of which is especially evident during takeoff.

Such developments are just one aspect of Etihad’s Sustainability50 program: its commitment to net-zero carbon emissions by 2050, which is also the aviation industry’s goal. The A350-1000 will serve as a sort of “flying testbed” for green technologies and initiatives by Etihad and outside startups to reduce the aviation industry’s carbon footprint, Etihad CEO Tony Douglas said.

“There is no one silver bullet out there,” he said. “The confidence that we have in this challenge is in no small part as a consequence of having access to this incredible machine, the performance that it delivers, and the way in which it will help us all to get better at getting better.” Good information though it pays to shop around. I looked at RT biz ORD-SIN for the first two weeks of Feb. and found Etihads price to be around 8k whereas JAL for the same time period is 5.2k. You do have along layover outbound but saving nearly 3k a room at a Tokyo hotel in or near the airport should ease that considerably.
I realize all routes are not apples to apples so will consider Etihad for other routes we may want to use.

Share 0
Reply
R
robinalton1405 July 31, 2022
|
jacketwatch Good information though it pays to shop around. I

You are so right always have to compare prices and $3000 is quite a difference. Sometimes you have to do a longer layover or a connection to get a better price. Non-stop flights can be quite a bit more.