News Dan Stables True or False: There Are Wild Predatory Cats Roaming England’s Countryside
NewsJust Back From: Carnival in Trinidad

Just Back From: Carnival in Trinidad

When does airline staff in Trinidad and Tobago have to make announcements about the status of elaborate headdresses as carry-on items? Only on post-Carnival flights.

Every year, residents in Trinidad and Tobago go all-out for Carnival, the country’s most-anticipated cultural, party-heavy happening centered in the capital city of Port of Spain. They welcome—and, as I learned, enthusiastically encourage—tourist participation in every aspect of the whirlwind festivities, which make it one of the best times to experience the local culture firsthand. Past celebrations have even lured the likes of Beyoncé and Mick Jagger to the "Home of Carnival" for inspired revelry. From music to parties to parading, here’s what you’ll not want to miss at Carnival, a time when the spirit of the season is infectious and the best of Trinidad is on full display. 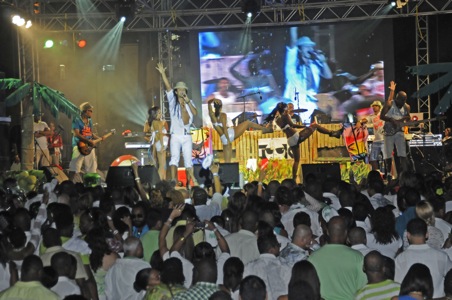 The Carnival soundtrack for parties and parades is soca, a term derived from "soul of calypso." The thumping beats keep people dancing for hours, and lyrics refer to Carnival themes like being "ready for the road," (or parading). Soca music’s big-name artist is Machel Montano, who has established an international following and knows how to keep a Carnival crowd dancing.

To see the best of soca artists and performances, get over to the International Soca Monarch competition on Carnival Friday. Artists perform their anthems on stage to compete for prize money and esteemed titles. This year’s competition saw the comeback of the soca superstar of eras past, SuperBlue, whose song "Fantastic Friday" pumped from speakers over and over throughout Carnival. 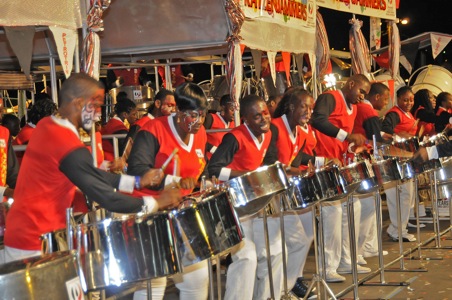 The steel drum originated here, and every year, the finals for the world’s top steel band competition Panorama take place at Carnival. Dozens of pannists, many playing multiple drums at once, comprise each band and together perform calypso arrangements, each performance more energetic, complex and impassioned than the last. You can visit bands’ pan yards prior to the big day for a front-row seat for their acts. 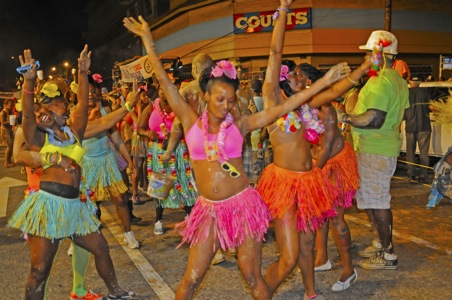 The pregame to Carnival season starts weeks in advance, with a social calendar jammed with "fetes." Hyatt Regency Trinidad throws one of the most buzzed-about fetes, LIME, with live entertainment from bands and top soca artists. Some local celebrities also host their own, and though prices can be steep for tickets, revelers consider them well worth attending and book their schedules with back-to-back-to-back fetes. The parties last for hours, and in addition to concerts, they offer the feting masses unlimited food and drink. 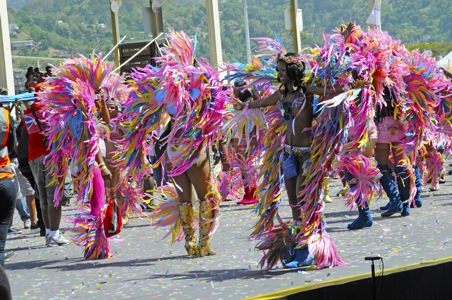 If you want to get decked out and parade in the streets with thousands of other sequined and feathered Carnival-goers, you want to "play mas" on Fat Tuesday. Purchase an outfit (now yours to keep) and you’re in the band, set to hit the streets for hours with similarly costumed locals and tourists of all ages, shapes and sizes. The crowning moment is crossing the Queen’s Park Savannah grand stage, but you’ll also pass judging points elsewhere during the day. I "played mas" with Paparazzi, and we set out at 7 am and paraded past nightfall, the energy never diminishing. DJ, food, drink and even bathroom trucks roll around the streets with the all-inclusive bands, so you have access to everything you need to keep you dancing through Port of Spain for hours.

People run on adrenaline at Carnival, and many head straight from fetes out to play J’Ouvert at the crack of dawn on Carnival Monday. You participate in the daybreak parade with a band, and as with most Carnival events, it is an impressive display of organized chaos. You’ll want to wear old clothes if you play – the point of playing J’ouvert is to smear paint, clay mud or cocoa all over each other. If you want to stay out of the muddy fray, you can always watch from the sidelines. The day morphs into a more low-key parade, a prelude to the extravagant costumes of Tuesday.

Plan early. Places like the Hyatt Regency Trinidad are fully booked months well in advance, so get your lodging sorted as soon as possible. If you want to "play mas," you also have to place your costume order early, because all outfits and headdresses are handmade-to-order.

Know the jargon. With the slang and the sing-song intonation, Trinidadian English often sounds like another language entirely. Some terms you will hear often at Carnival time include "to lime," which means to hang out, "to chip," which is the word for the part-walking-part-dancing of paraders, and "to wine," which is the hip-centric dancing, often to soca music (and has tourists like me in awe of how they can move their bodies so expertly).

Head to Maracas Beach. Over and through the mountains, Maracas Beach is one of Trinidad’s most spectacular beaches and is where many locals head to take a Carnival breather. "Shark and bake" also is a major draw. The local specialty is deep-fried shark sandwiched in a thick, fluffy flour "bake," and sold from stands along the bay. Top it with salad, spicy sauces and pineapple.