Hotels & Lodging Diana Spechler We Talked to 6 Hotel Psychics. These Are Their Predictions for 2023
Hotel Everest

The view alone is worth the trip to this amazing Nepali hotel at Mount Everest.

I tried not to get my hopes up as the shuttle bus stopped just shy of the runway, a sliding glass door the only thing between me and a green turbo prop airplane destined for the Tenzing-Hillary Airport (LUA) in the Everest region of Nepal. I had been in this same spot exactly 24 hours earlier only to get a call from the tower that the winds had shifted and it was no longer safe to land at what’s been named “the most dangerous airport in the world.” 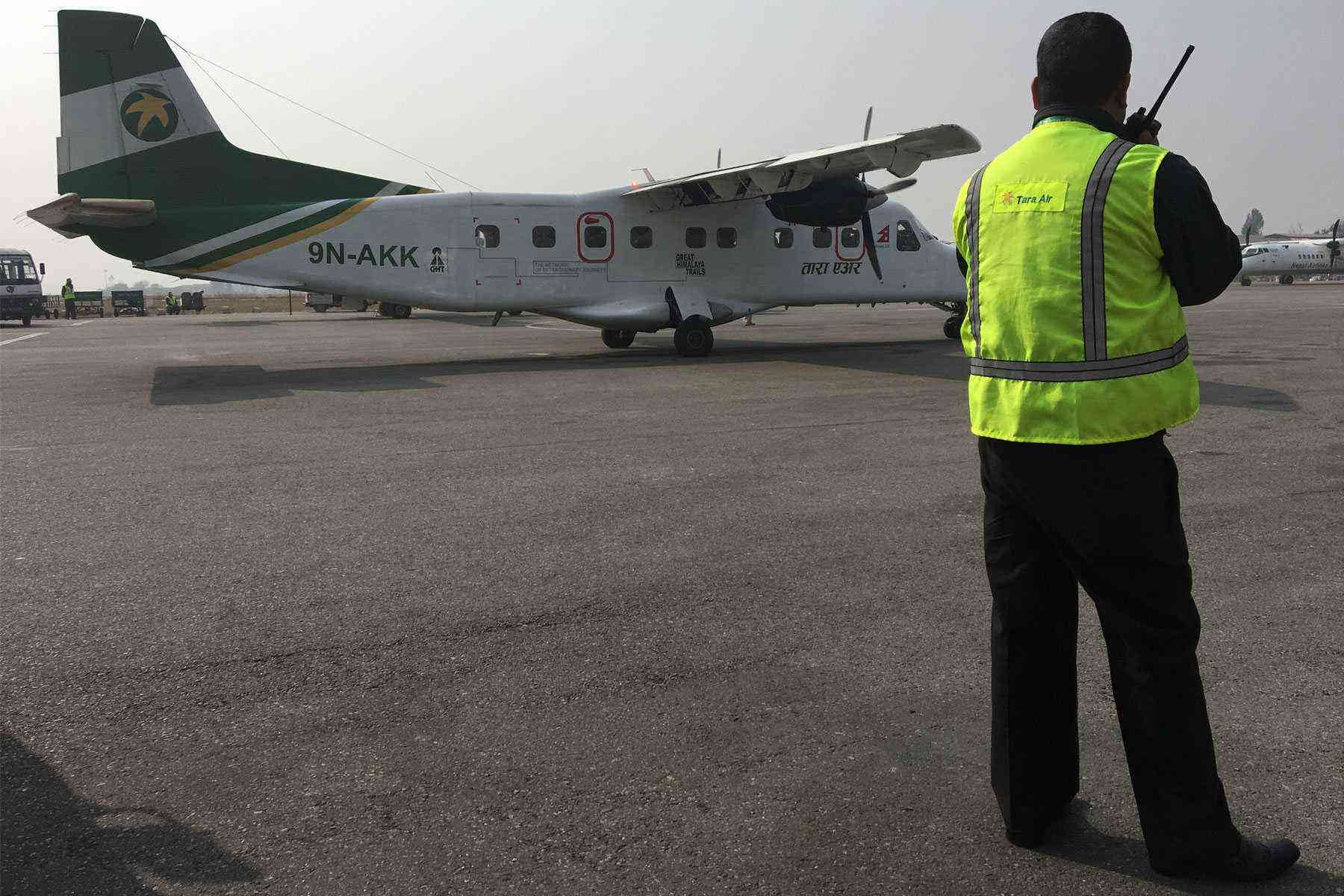 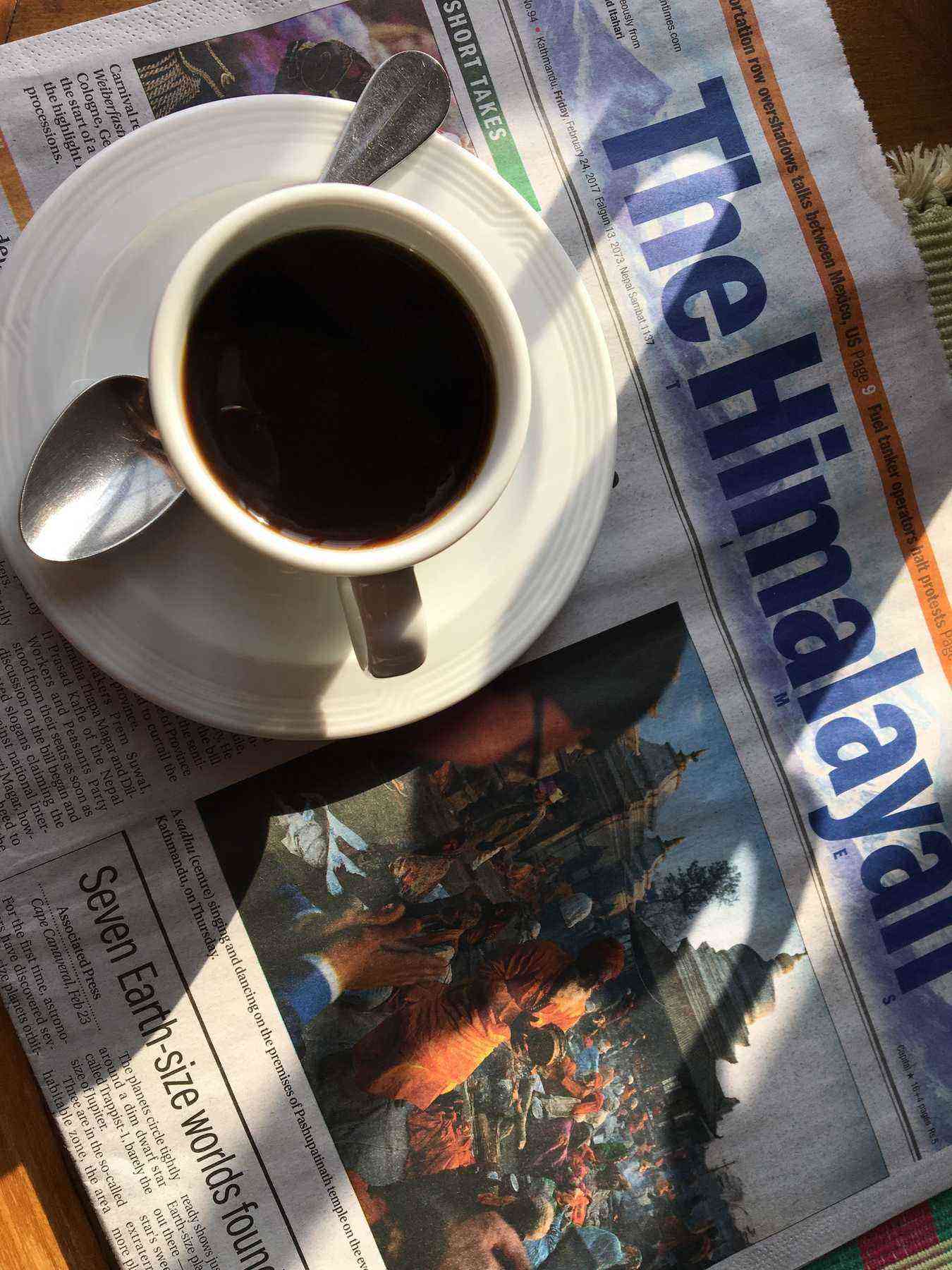 This was my third day attempting to fly from Kathmandu to LUA; the day prior I never even made it past the security checkpoint before they turned us all away due to “excessive cloud cover” at the destination. For three days I got my hopes up every morning at the airport, only to spend my nights wandering the streets of Kathmandu, where I would drown my disappointment in momos (Nepali dumplings) and Sherpa beer while answering questions from curious bartenders.

Specifically, I was hiking to the Hotel Everest View; a hotel I had only heard about a few months prior. I had already planned to spend some time in India that month, and a series of “why not” moments led me to extend my time overseas and spend a few days hiking my way up to the highest placed hotel in the world (Guinness Book of World Records, 2004) for the chance to realize a long-standing dream of mine to see Mount Everest with my own two eyes.

Hotels & Lodging Diana Spechler We Talked to 6 Hotel Psychics. These Are Their Predictions for 2023
Continue Reading Article After Our Video

The hotel sits at 13,000 feet inside the Sagarmatha (Everest) National Park, a UNESCO World Heritage Site. From its perch atop a ridge in Syangboche, the Hotel Everest View is entirely surrounded by the Himalaya’s most stunning peaks, namely Mount Everest (the highest peak in the world at 29,029 feet), which can be seen from each of the 12 expansive hotel rooms and is the focal point of the hotel’s dining room and outdoor terrace. The location was chosen strategically by mountaineer Takashi Miyahara, who was so captivated by the panoramic views of the location back in 1968 that he decided to begin the seemingly impossible task of building a world-class hotel in one of the most remote locations in the world. 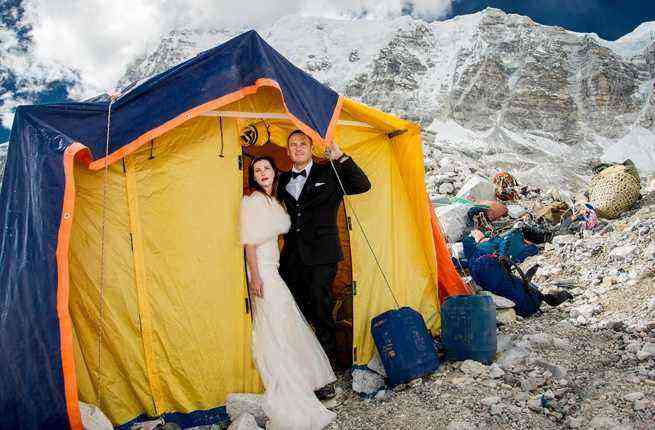 Every single piece of the hotel had to be carried in by hand or brought in by helicopter as there are no roads leading up to the hotel.

Miyahara enlisted the help of local Sherpas and porters to help build the hotel, bringing much-needed jobs to the region (note: to this day, the hotel is 100 percent staffed by Nepalis, including numerous Sherpas). Every single piece of the hotel had to be carried in by hand or brought in by helicopter as there are no roads leading up to the hotel. Porters made a well-worn path between the hotel and Lamusangu, a trek that took two-weeks each way, to bring in items like flooring, dishware, and construction materials. The entire process took several years to complete, but the doors of the Hotel Everest View finally opened in 1971.

To this day, everything needed to keep the hotel operating on a daily basis (toilet paper, food, kitchen equipment, etc.) is still brought in on the back of a porter or by helicopter. Just the mere fact that the hotel has Wi-Fi and that each room has hot running water is a credit to Miyahara and his team’s ingenuity and backbreaking hard work.

Guests are given an option as to how they want to arrive; either to hike in with a three-day trek from the airport in Lukla alongside a porter and a professional trekking guide, or to charter a helicopter from Lukla or Kathmandu direct to the hotel’s helipad. I chose to take the longer route and hike my way to the hotel, unaware at the time that even just arriving at the starting point of the hike would be a journey in itself.

After three days of canceled flights and endless arranging and rearranging of my travel plans, my heart nearly skipped a beat as I took my seat on that Yeti Airlines flight destined for Lukla. The engines started up and I was still in denial that this was actually happening until the sole flight attendant crouched through the handful of seats on the plane to distribute a single cotton ball to each passenger. I watched as the regulars in the front of the plane tore theirs in two and twirled the halves into their ears for protection from the whirring sounds.

Less than 40 minutes from takeoff, we landed and I was face-to-face with the man who would become my guide for the journey and my friend long after I returned home. The Hotel Everest View partners their guests up with professionally certified guides through Trans Himalayan Trekking and provides them with a porter to carry a small bag of personal items and necessities for the trek.

I was happy to learn that my guide, Sanjay, had led countless tours to the hotel and to Everest Base Camp from his home in Lukla, but I was even happier to learn that he and I shared the same taste in music and momos. We spent the first portion of the hike swapping stories and sharing playlists, where I introduced him to the greatness of Mumford and Sons and he turned me onto Nepali artist Shyam Karki, before choosing where we’d stop for the night based on where we could get the best momos and dal bhat. 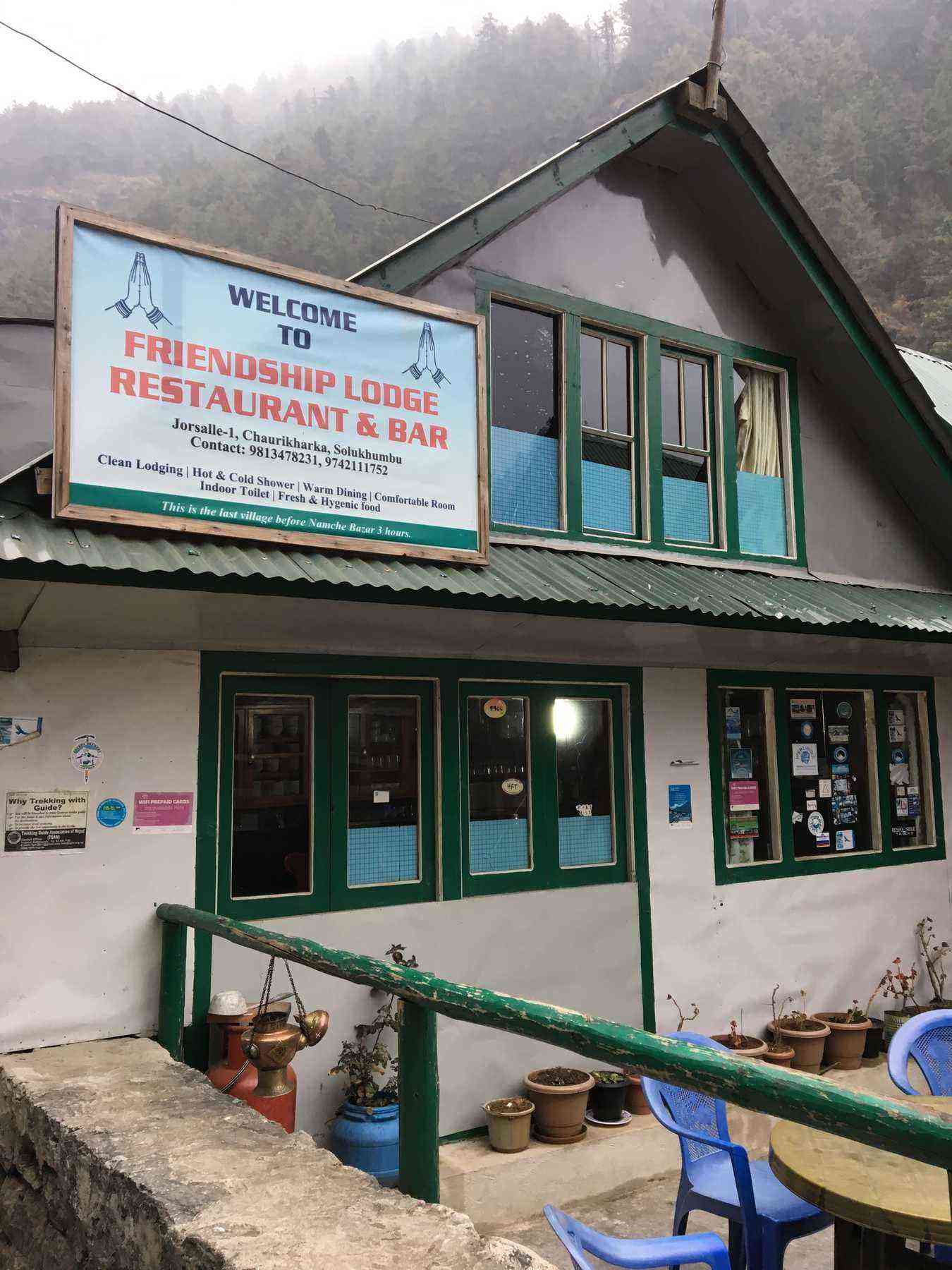 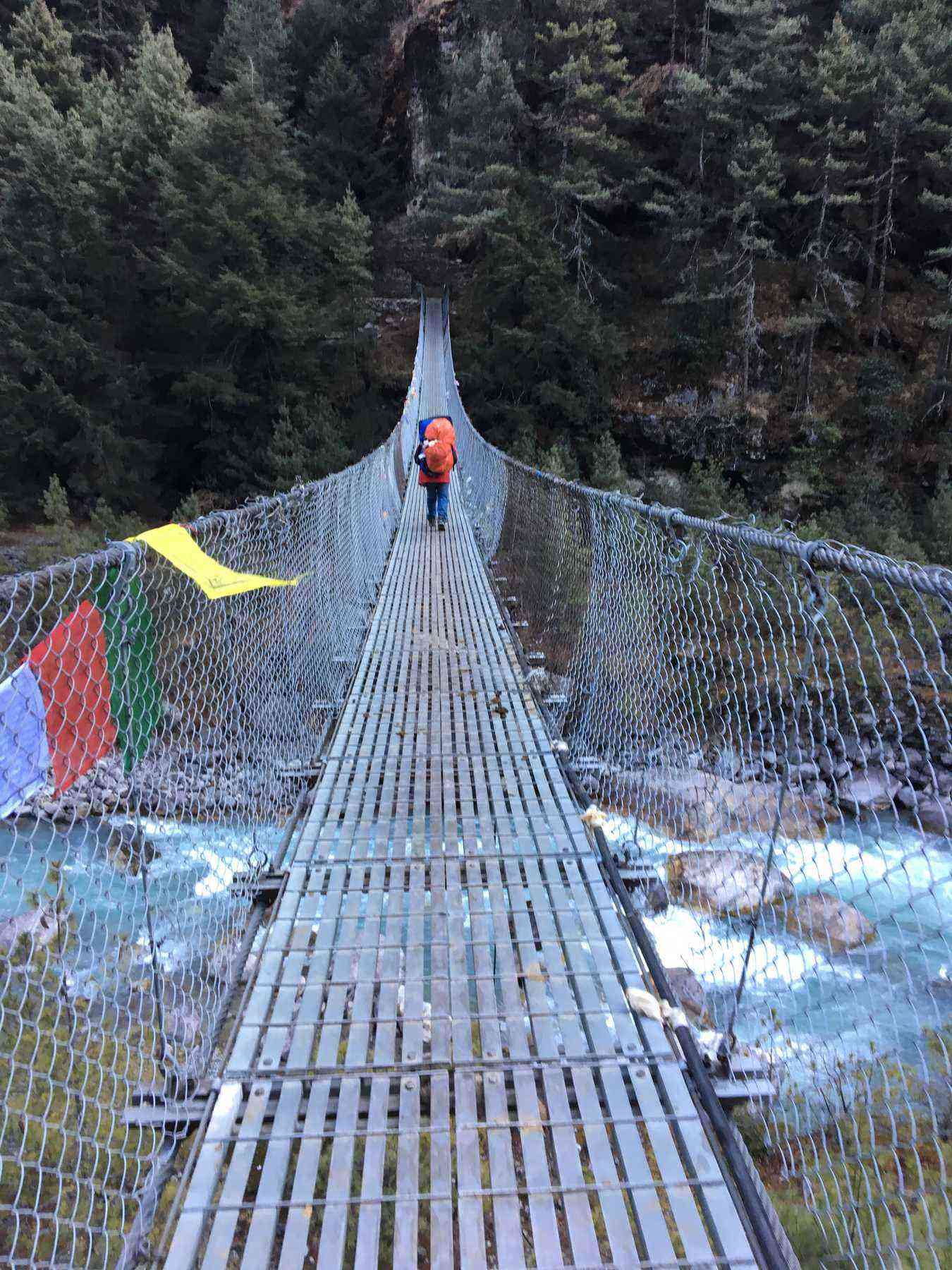 There are numerous Sherpa villages along the trail to the hotel, each offering a handful of houses that provide trekkers with basic amenities like a bed, a shower, and a hot meal often prepared by the owner of the home. We pushed through a few hours longer than planned on the hike in order to make up for time I had lost at the airport in Kathmandu. When we finally stopped at the Friendship Lodge in Jorsalle, nothing felt better than crawling into my sleeping bag warmed with a hot water bottle while I fell asleep to the sounds of the mighty Dudh Koshi River outside my window, my belly full of handmade dumplings.

Despite the fact we climbed 1,970 feet in two hours, my energy was soaring as I caught my first glimpse of Mount Everest.

We woke early the next morning with the goal of making it to the hotel before sundown, turning what is normally a three-day hike into a day and a half hike. Despite the fact we climbed 1,970 feet in two hours, my energy was soaring as I caught my first glimpse of Mount Everest. By the time we arrived at Namche Bazaar, I couldn’t bring myself to take a break knowing that the Hotel Everest View was now only a few short hours away. I left Sanjay and the porter behind in the village as I made my way up the well-worn path to the hotel.

The trail wound around jagged peaks, and I lost my breath when I stood face-to-face with the gorgeous and ominous snow-capped mountain that I had only ever seen in pictures before this moment. Tears welled up in my eyes, and I inhaled deeply to regain my composure. With no one in sight, I did what any normal 30-something would do in this situation: I turned my back to the mountain, smiled widely, and raised my phone to snap my first Everest selfie. Right at that moment, Sanjay caught up with me and I watched him approach me with a confused look on his face.

“That’s not Everest,” he chuckled and walked past my upstretched arm to show me the real Mount Everest out in the distance.

Everest was tiny compared to the soaring mountains surrounding me, evidence of how far I still had to go, and I found myself asking Sanjay to remind me at each turn which mountain was the mountain.

Clouds loomed in the distance, threatening to obstruct my view of Mount Everest, so I hurried on, eager to make it before the clouds so I could sit on the hotel’s terrace and take in the unobstructed beauty of the mountain for as long as they would let me stay there.

My head was down to navigate the stone pathway as I turned the last corner. When I lifted it up, I gasped in surprise as my eyes fell on a series of stone steps leading up to the Hotel Everest View … and then I ran. My legs couldn’t take me fast enough—I took the steps two at a time, eager to arrive before the clouds.

My excitement must have been evident because, as I entered the hotel, the general manager simply smiled and said, “Welcome to the Hotel Everest View. This way Mrs. Alpert.” He led me through the wooden-walled lobby, and past an ancient boulder inlaid in hand carved stones that bore an original Tibetan Buddhist inscription, “Om mani padme hum,” and finally opened the doors to the terrace and ushered me outside. 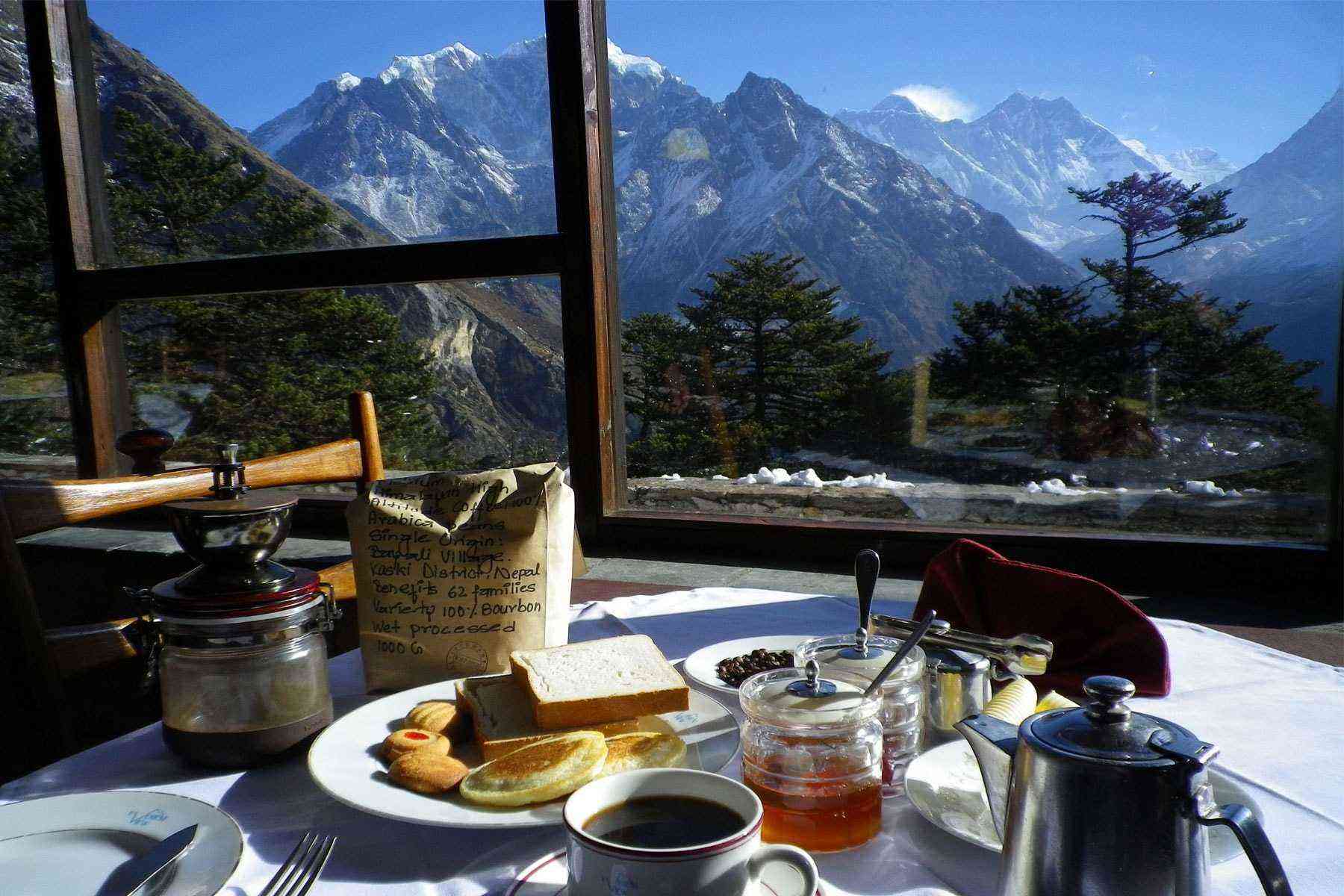 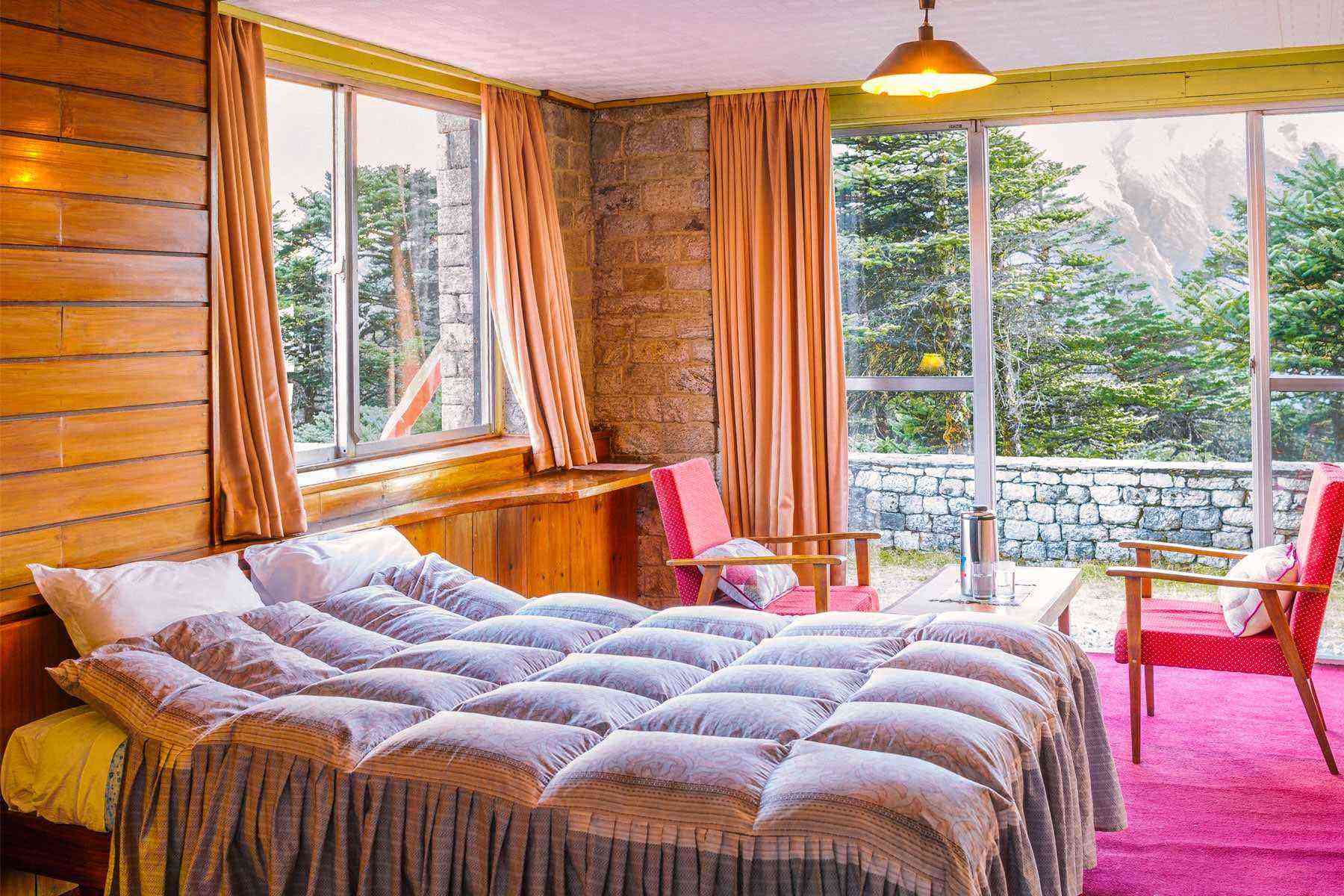 Seeing Mount Everest in person was something I had dreamed about as a child, and it was hard to shake the feeling that I was standing in a place where many dreams are realized and where many more begin.