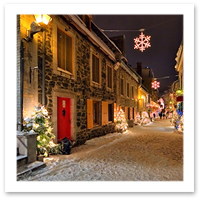 The holidays can be hell for people who don’t know how to slow down and have a good time. Learning to relax, though, is as easy as riding a bike, and in these three destinations it’s twice the fun.

Perched above the Saint Lawrence River, Québec City is one of those rare North American destinations that feels both historic and hip. Today’s surplus of trendy shops and eateries makes it certifiably “hot,” but only in the metaphoric sense — temps frequently drift south of freezing in December, so bundle up for a truly Joyeux Noël.

Do: Check out the labyrinthine streets of the city, which are lined with meticulously preserved 17th- and 18th-century buildings, many of them now housing bistros and boutiques. On Dufferin Terrace, more daring souls can try Les Glissades (an 850-foot toboggan run) or go for a leisurely skate. You can also slice the ice at Place d’Youville, which will morph into a festival stage on New Year’s Eve for the launch of Québec City’s 400th anniversary celebrations.

Christmas fairs are all the rage these days, but from the foodies’ perspective none compares to the one held daily in December at Marché du Vieux-Port. More than 100 provincial producers gather at the market to sell Canadian treats (think maple syrup and artisanal ice cider) and Euro-yummies like pâtés, confits, and tasty baguettes. Sleep: Like the French towns it was modeled on, Québec City has class, culture, and a castle, Le Fairmont Château Frontenac. The hotel (photo, right), famous for its towers, turrets, and opulent decor, opened in 1893. Since then it has played host to kings, queens, presidents and prime ministers. You can enjoy royal treatment, too, within the Château’s historic walls. Public areas are suitably regal, and though guest rooms are a tad small the period furnishings and plush carpets will make you feel grand beyond belief. In December, rooms start at $189CDN.

Want something more intimate? Hang your hat at Auberge St-Antoine, where history meets modernity in a series of restored portside warehouses with contemporary décor. The 94 rooms and suites, some with fireplaces, hot tubs, or large terraces, start at $189CDN.

Eat: Sample local flavors at L’Initiale, in Basse Ville (Lower Town). Look for beef, lamb, or quail sourced from local farms, or go wild with medallion of red deer. Desserts run the gamut, from rich “Sablé Breton” shortbreads to a selection of Québécois cheeses with an eight-course menu dégustation costing about $89CDN.

At Laurie Raphaël, also in the Lower Town, the motto is “Made in Québec.” So expect anything from a mushroom mousse to Charlevoix smoked salmon and sweet maple tarts. Love a surprise? Order the “Chef Chef” menu, a three-course meal ($23 CDN at lunch, $60 CDN at dinner) featuring dishes that seem to spring spontaneously from Chef Daniel Vézina’s ample imagination. 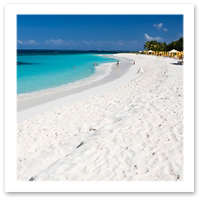 If your goal this holiday season is to get on a 24/7 cycle of lounging, eating, and sleeping, then tiny Anguilla is the place to do it. You won’t find towering pines but you might spot a Christmas star. After all, celebs Denzel Washington, Liam Neeson, Beyoncé and Brad Pitt are known to vacation here.

Do: Check out the island’s world-class beaches. The best are Shoal Bay and Rendezvous Bay. The former, not to be confused with Shoal Bay West at the other end of the island, is fringed with coconut palms and covered in fine, powdery white sand. Barnes Bay is great for windsurfers and snorkelers, and Robinson Crusoe wannabes seeking perfect isolation enjoy Captain’s Bay.

If you’re feeling guilty about the friends and family you’ve left behind, soothe your conscience by loading up on stocking stuffers for them at the Anguilla Arts & Crafts Center, which specializes in island-made items. For something more substantial, see work by Anguillan painters at the Savannah Gallery for Art, or hop a ferry to Marigot on French St. Martin and splurge on goodies at Hermès, Montblanc, and other high-end retailers. 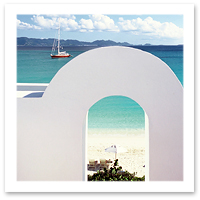 Sleep: The jewel in Anguilla’s accommodations crown is Cap Juluca, a Moorish-inspired pleasure palace on Maundays Bay. Starting room rates are now $520, jumping to $1,150 between December 18 and January 3, 2008. But if you’ve been very good this year, Santa may pop for one of the private villas (photo, right), which come with a 24/7 butler. Even standard rooms have private beachfront terraces.

Kú, Cap Juluca’s all-suites sister hotel, attracts a younger crowd with lower prices and a livelier, less formal vibe (note the 75-foot beachfront bar) that is all of a piece with the to-die-for digs. Each of the 27 suites measures a generous 775-square feet and start at $355. 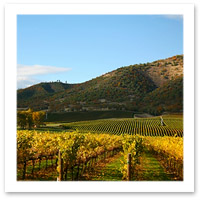 It’s been called “America’s Answer to Tuscany,” but the Napa Valley can easily stand on its own as a top-of-the-line destination. Over the festive holiday season, the lucky denizens of Napa, Yountville, St. Helena, and Calistoga pull out all the stops — and all the stoppers.

Need a big fix of holiday cheer? Check out “Carols in the Caves,” a series of subterranean Christmas concerts held in four wineries over four weekends, kicks off December 15.

Do pencil in some down time at Spa Terra (photo, right), in Napa’s new Meritage Resort. The spa, 40 feet belowground in an estate cave, specializes in vinotherapy treatments incorporating the fruit of the vine. Check out the two-hour Solo Vino “body libation” ($235), which encompasses exfoliating grape-seed scrub, body wrap, and wine-cave mud mask. 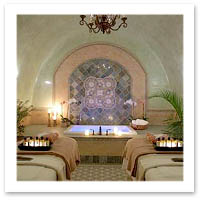 Sleep: Don’t judge the 86 freestanding cottages at Carneros Inn by their rather rustic exteriors. Airy, bright, and washed with light, the interiors are outfitted with wood-burning fireplaces, DVD players, flat-panel TVs, and (in most cases) sublime soaker tubs. Prices start at $335.

For a home-y feel, reserve a room at Meadowlark Country House, a mile north of Calistoga. Set on 20 idyllic acres, it defies the too-twee B&B stereotype. Spacious guestrooms have clean lines and the pool is clothing-optional. Nightly rates (starting at $210) include breakfast.

Eat: If California were a country, it would rank as the world’s fourth-largest wine producer, after Italy, France, and Spain. But that doesn’t mean that food plays second fiddle here. Chef Thomas Keller proves as much at his landmark French restaurant, French Laundry, which has earned three Michelin stars and five AAA diamonds. Unfortunately trying to get a reservation here can take months. Still, you can sample Keller’s cooking at Bouchon, also in Yountville.