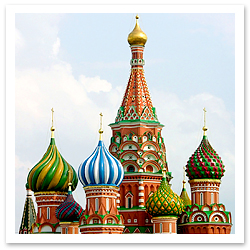 St. Basil’s Cathedral, Moscow
It was commissioned by Ivan the Terrible on October 1, 1552. The central chapel, which rises 107 feet, is surrounded by eight tower-like chapels linked by an elevated gallery. Each chapel is topped by an onion dome carved with its own distinct pattern and dedicated to a saint on whose day the Russian army won battles against the Tatars. The museum in the cathedral displays, among other things, 16th-century Russian and Tatar weaponry.

Red Square, Moscow
Many suppose that the name “Red Square” has something to do with Communism or the Bolshevik Revolution. But in actuality the name dates to the 17th century. The adjective krasny originally meant “beautiful,” but over the centuries the meaning of the word changed to “red,” hence the square’s present name. The square is most beautiful and impressive at night, when it’s entirely illuminated by floodlights, with the ruby-red stars atop the Kremlin towers glowing against the dark sky. 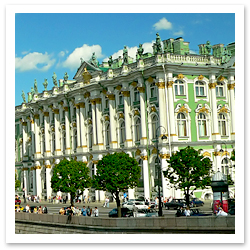 Winter Palace, St. Petersburg
With its 1,001 rooms swathed in malachite, jasper, agate, and gilded mirrors, this famous palace, now the site of the State Hermitage Museum, is the grandest monument of that strange hybrid known as the Russian rococo, in itself an eye-popping mix of the old-fashioned 17th-century baroque and the newfangled 18th-century neoclassical style. The palace contains more than 1,000 rooms and halls, including the famous Malachite Room, designed by the architect Alexander Bryullov and decorated with columns and pilasters of malachite.

State Hermitage Museum, St. Petersburg
This is undoubtedly one of the world’s most famous museums. The walls are works of art themselves, as the collection is housed in the lavish Winter Palace, one of the most outstanding examples of Russian baroque magnificence. The museum takes its name from Catherine the Great (1729-96), who used it for her private apartments, intending them to be a place of retreat and seclusion. Big-ticket items include works by Raphael, Titian, Rembrandt, Lippi, Caravaggio, Murillo, Goya, Delacroix, Corot, Courbet, and Degas, among many others. 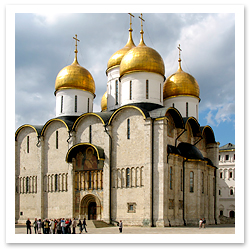 The Kremlin, Moscow
Few places in the world possess the historic resonance of the Kremlin. The first wooden structure was erected on this site in the 12th century. As Moscow grew, the city followed the traditional pattern of Russian cities, developing in concentric circles around the elevated fortress at its center. After Moscow emerged as the center of a vast empire in the late 15th century, the Kremlin came to symbolize the mystery and power of Russia. Before the Bolshevik Revolution, tsars were ceremoniously crowned and buried here. In the 20th century the Kremlin became synonymous with the Soviet government. Much has changed since the Soviet Union broke up, but the Kremlin itself remains mysteriously alluring.

The Bolshoi Theatre, Moscow
Moscow’s oldest theater, formerly known as the Great Imperial Theater, was completely rebuilt after a fire in 1854 and renovated again at the turn of the 21st century. The building is remarkable: its monumental colonnade is topped by a statue of bronze horses pulling the chariot of Apollo, patron of music. Its crimson-and-gold interior is similarly grand. All of this splendor is matched by the quality of the resident opera and ballet troupes — two of the most famous performing-arts companies in the world. If you want to see a performance at the Bolshoi, be sure to book one of its 2,155 seats far in advance of performance, as tickets sell-out quickly. 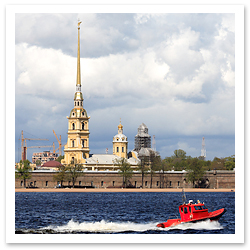 Peter and Paul Fortress, St. Petersburg
The fortress was erected in just one year, between 1703 and 1704, to defend this location in the Great Northern War against Sweden. The fortress’ main attraction is the Cathedral of Sts. Peter and Paul. It is highly unusual for a Russian Orthodox church. Instead of the characteristic bulbous domes, it is adorned by a single, slender, gilded spire whose height (400 feet) made the church for more than two centuries the city’s tallest building. The spire remained the city’s highest structure — as Peter the Great wanted it to be — until 1962, when a television tower was erected.

Pushkin Museum of Fine Arts, Moscow
One of the finest art museums in Russia, the Pushkin is famous for its Gauguin and Picasso paintings, among other masterpieces. Founded by Ivan Vladimirovich Tsvetayev, of Moscow State University, father of poet Marina Tsvetaeva, the museum was originally established as a teaching aid for art students, which explains why a large part of its collection is made up of copies. The original building dates from 1895 to 1912 and was first known as the Alexander III Museum. It was renamed for Pushkin in 1937, on the centennial of the Russian poet’s death. Next door, the Museum of Private Collections hosts some of the museum’s most famous works. 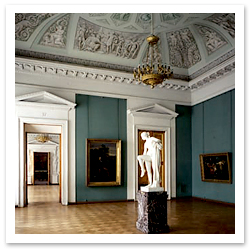 State Museum of Russian Art, St. Petersburg
The collection at the museum is four times greater than Moscow’s Tretyakov Gallery. Outstanding icons include the 14th-century Boris and Gleb and the 15th-century Angel Miracle of St. George. Both 17th- and 18th-century painting is well represented. By far the most important cache, however, comprises 19th-century works — huge canvases by Repin, many fine portraits by Serov, and Mikhail Vrubel’s strange, disturbing Demon Cast Down. For many years much of this work was unknown in the West, and it’s fascinating to see the stylistic parallels and the incorporation of outside influences into a Russian framework.

The Armory Palace, Moscow
The Armory Palace is the oldest and richest museum in the Kremlin. It was originally founded in 1806 as the Imperial Court Museum to house various royal treasuries. The Imperial Court Museum was moved to the present building in 1851 and it was further enhanced and expanded after the Bolshevik Revolution. It now contains some 4,000 exhibits dating from the 12th century to 1917, including a rare collection of 17th-century silver, royal carriages, imperial armor, and much more. Don’t miss the imperial thrones in Hall VII. The line up includes one that apparently belonged to Ivan the Terrible.

Tretyakov Gallery, Moscow
The Tretyakov Gallery is the repository of some of the world’s greatest masterpieces of Russian art. Spanning the 11th through the 20th centuries, the works include sacred icons, stunning portrait and landscape art, the famous Russian Realists’ paintings that culminated in the Wanderers’ Group, and the splendid creations of Russian Symbolism, Impressionism, and art nouveau. 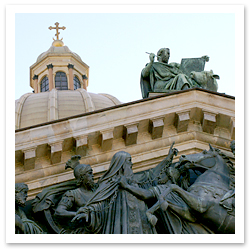 St. Isaac’s Cathedral, St. Petersburg
St. Isaac’s is one of the world’s largest domed cathedrals. Its architectural distinction is a matter of taste; some consider the massive design and highly ornate interior to be excessive, whereas others revel in its opulence. Tsar Alexander I commissioned the construction of the cathedral in 1818 to celebrate his victory over Napoléon. The French architect Auguste Ricard de Montferrand devoted his life to the project, and died the year the cathedral was finally consecrated, in 1858. When the city was blockaded during World War II, the gilded dome was painted black to avoid its being targeted by enemy fire. Despite those efforts, the cathedral suffered heavy damage, as bullet holes on the columns on the south side attest.