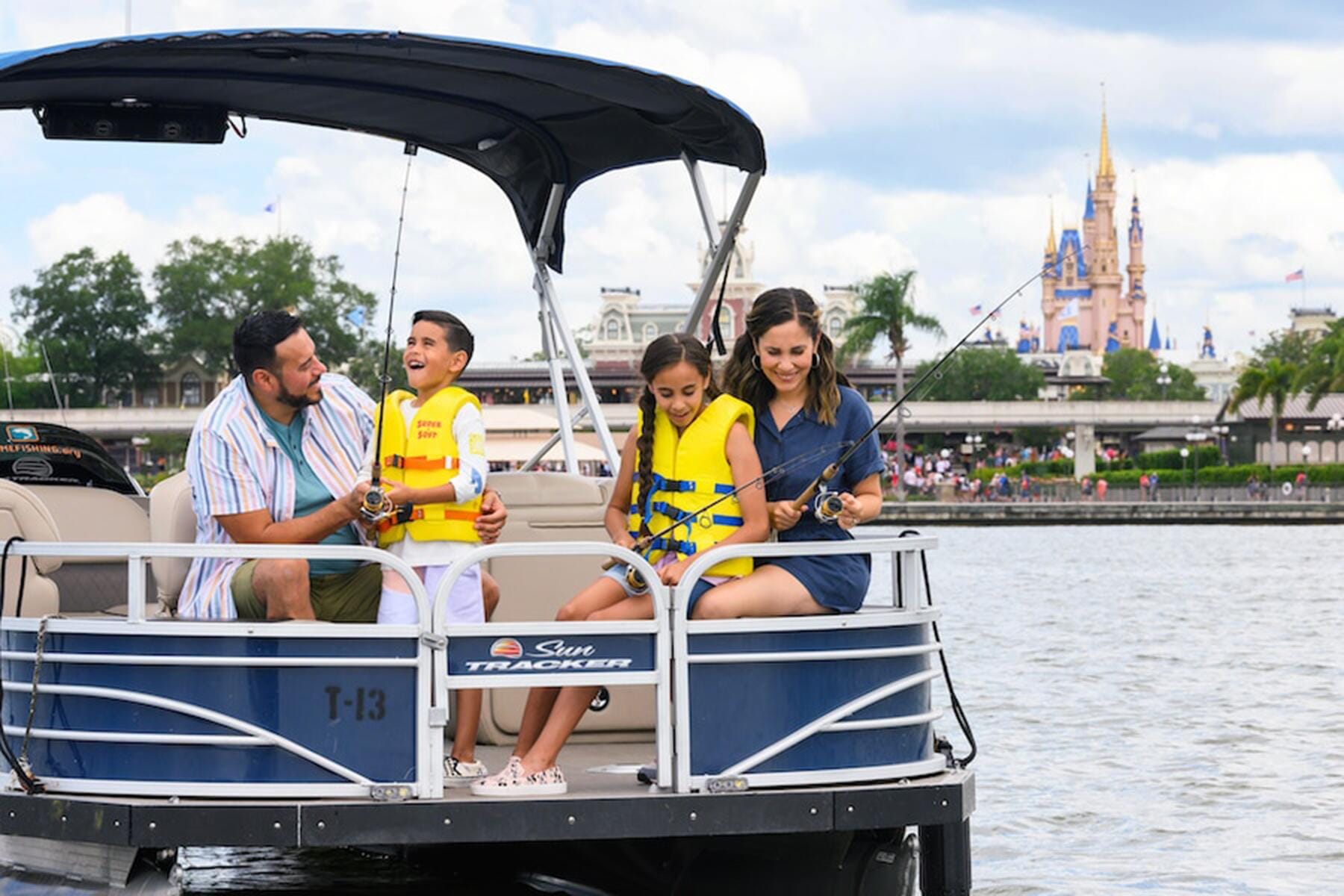 News Deanne Revel This Is the Most Queer-Friendly Disney Park. And No, It's Not in California
Disney

(To the tune of “Do You Want to Build a Snowman?”) Do you want to have your mind blown?

Disney just previewed its brand new cruise ship, Wish. It’s the fifth ship in Disney’s fleet and it will set sail the summer of 2022–the maiden voyage is scheduled for June 9, 2022. Castaway Cay members (people who have cruised with Disney before) and select Disney Guests can start booking May 17, 2021–before the general public. Enchantment, awe, dreams, and fairy tales are all part of the ship’s theme which can be seen when you first enter the ship’s Grand Hall. A statue of the queen of wishes herself, Cinderella, greets guests while the wishing star sparkles from the Hall’s magnificent chandelier–rumor has it that guests can wish upon this shimmering star.

While the Grand Hall will have the fleet’s first-ever atrium stage, the entertainment firsts don’t stop there. Luna, inspired by the Disney and Pixar short La Luna, will entertain families during the day with live shows and programming, before transforming to an adult-exclusive venue in the evenings. There will even be semi-private booths in the balconies for those needing a little more space. The Hero Zone is also getting an interactive, competitive upgrade that families are sure to enjoy. The theatrical events will continue including two original productions that have yet to be announced, and of course, there will be two movie theaters screening classic and first-run films. There’s nothing quite like seeing a film on opening day in the middle of the Atlantic Ocean.

News Deanne Revel This Is the Most Queer-Friendly Disney Park. And No, It's Not in California
Continue Reading Article After Our Video

Of course, Disney Cruise’s signature kids’ clubs are back with spaces for babies, toddlers, tweens, and teens, but it’s The Oceaneer’s Club (ages 3-12) that’s getting the most significant facelift. Fairytale Hall is a new space that has Belle’s Library, Rapunzel’s Art Studio, and Elsa and Anna’s summer cabin. Marvel Super Hero Academy has a new experience called Avengers: Mission Training that allows kids to virtually put on a superhero suit and battle bad guys, and the first-of-its-kind Walt Disney Imagineering Lab provides hands-on activities and experiments that give kids a glimpse into the world of the Disney Imagineers—the people who create Disney’s parks, resorts, and ships. Oh, did we mention that there’s a kids-only slide entrance from the Grand Hall into the kid’s space?

Will There Be Any Dining Firsts?

Family dining on a Disney Cruise is part theater, part meal, and those offerings have been completely reimagined for the Wish as well with three new themed restaurants. Arendelle: A Frozen Dining Adventure is Disney’s first Frozen-themed theatrical dining experience, and it will tell a new chapter in Elsa and Anna’s tale. And yes, you guessed it, there will be Nordic-inspired cuisine. Then there’s 1923, an elegant space that pays homage to Old Hollywood and the year the Walt Disney Company was founded. More than 1,000 drawings, props, and paraphernalia adorn the walls illustrating the evolution of Disney animation; the menu highlights California-fusion flavors. And last, but certainly not least, Worlds of Marvel—the first-ever Marvel cinematic dining adventure—will have a menu that features dishes inspired by African Wakanda, Eastern European Sokovia, and New York City (home base for the Avengers). 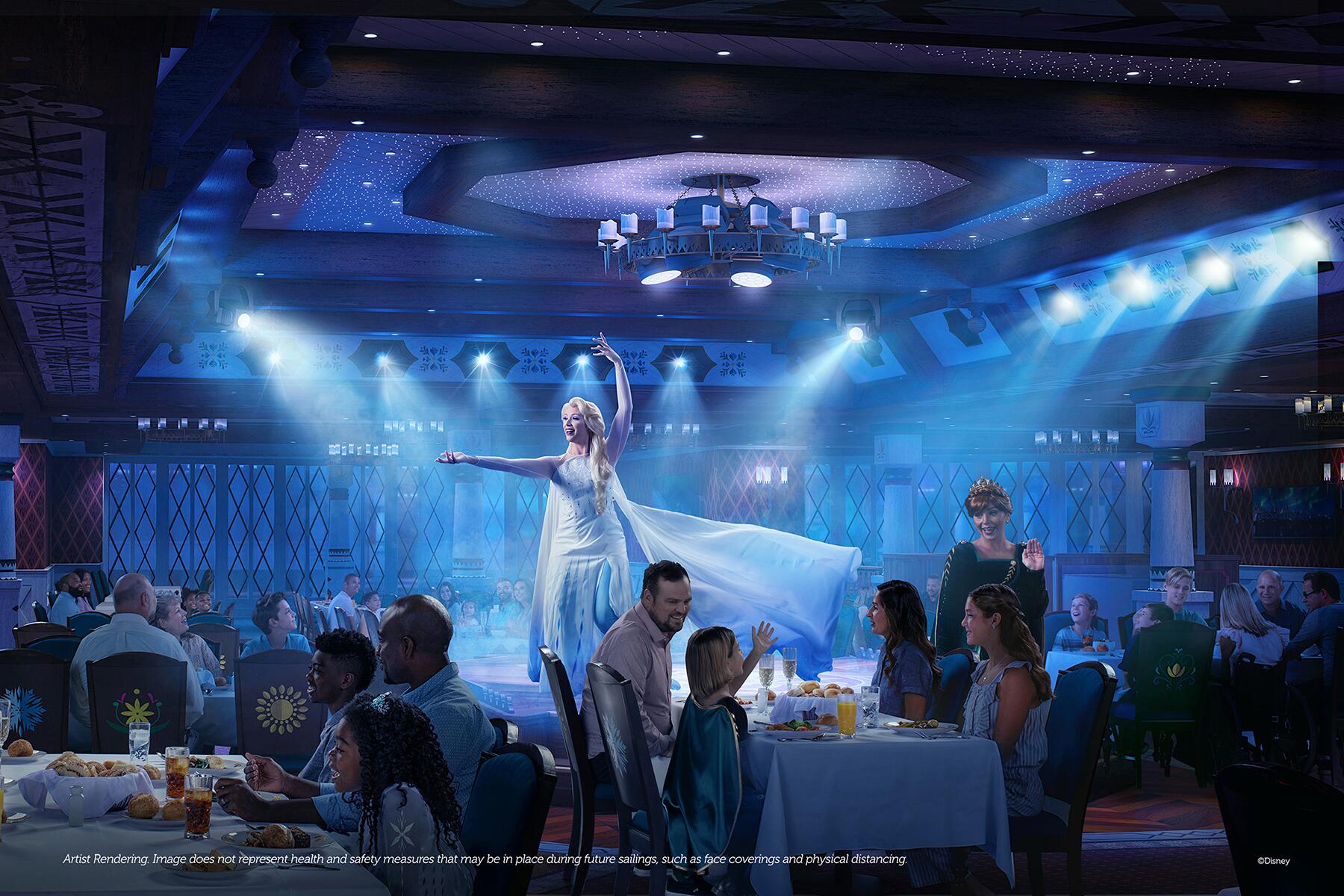 Can Adults Expect Anything New?

Because adults need some alone time, especially on a ship filled with kids, there will be numerous adults-only experiences. Fan-favorites like Senses Spa and Sense Fitness and Quiet Cove Pool District return, but there are also a few that are unique to the Wish. Taking inspiration from the Star Wars universe, the Hyperspace Lounge will look similar to Dryden Vos’ ship in Solo: A Star Wars Story. There will be Star Wars-themed cocktails and a virtual “window” behind the bar will feature galactic scenes of Batuu, Tatooine, and Mustafar. If princesses are more your thing, three new eateries take inspiration from Beauty and the Beast. The Italian-focused Palo is back with a steakhouse spin and nods to everyone’s favorite bossy clock, Cogsworth. Enchanté by Chef Arnaud Lallement is the ship’s fine-dining experience and who’s better than the debonaire Lumiere to run it. And The Rose is the perfect place for a pre or post-dinner dinner.

What About the Staterooms?

All of the staterooms–there are 1,254–will be unique to the Wish too with the theme of enchanted fairy tales woven into the linens, the artwork commissioned exclusively for the ship, and the surprise ceiling mural kids see when they climb into bed at night. Another enchanting aspect of the staterooms? Ninety percent have ocean views. And, if you’re extra lucky, you might get to stay in one of the four Royal Suites, two of which are two-story connected by a spiral staircase.

What Are We Most Excited About?

Almost every Disney Cruise ship has a water slide on the Upper Deck, but the Wish is getting the AquaMouse, the first-ever Disney Attraction at sea. This 760-foot long interactive water ride will slip and slip above the ship’s Upper Deck combining lightning, sound, video, and what Disney calls “splashtacular surprises” for a completely immersive experience that puts riders into the cartoon world of “Scuba Scramble.”

This is also the first of Disney’s fleet to run on Liquefied Natural Gas (LNG), which is said to be the cleanest marine fuel available (all of Disney’s new ships will use this going forward). Disney’s first LNG-powered boat will also be the first to feature artwork of Captain Minnie Mouse on the bow. Who will be on the stern? Rapunzel herself dangling from her hair while she tried to paint the ship–another first.