Writer, photographer and broadcaster Crai S. Bower contributes scores of adventure-based articles and images annually to more than 25 publications including AARP, En Route, Journey, The Saturday Evening Post and AFAR, where he is the "Whistler Insider." His regular work with Hearst Media reaches millions of readers and viewers per month. In 2022, Bower will launch "Aging Playfully - Toward the 'Just Try It' Lifestyle," a monthly 2,000-word column for AARP's 30+ million members featuring images, social media, and video. He will also debut "Literary Haunts," a travel-based column for Saturday Evening Post. His social media collaborations average 40,000 likes. Bower specializes in outdoor adventure, "adrenaline rushes that won't kill you and end with a decent bottle of wine." A frequent radio and television guest, he has communed with Komodo dragons in Indonesian, skied the Banff backcountry, and fat tire cycled upon the Siberian ice floes off the coast of Hokkaido, Japan, among hundreds of other assignments. His two-decade travel media career has also included walking in the steps of Dylan Thomas in Wales (SF Chronicle) as well as James Bond 007 (Inspirato), for which he drove a Aston-Martin Vantage V-12 in excess of 130-mph through the Cotswalds of England. Bower's photography has appeared in dozens of publications including Private Clubs, The SF Chronicle, American Way, Celebrated Living and Delta Sky. His 2016 Private Clubs Summer '17 cover image was a 2017 Maggie Award Finalist. He has also received several Explore Canada awards and received a 2016 NATJA Special Feature award. He is profiled in "Seattle 100: Profile of a City (Voices that Matter)." 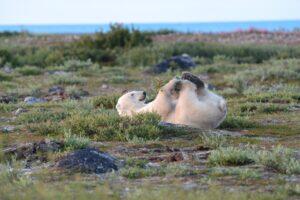 Where to Spot All of North America’s Most Adorable (and Sometimes Dangerous!) Wildlife

From polar bears in Manitoba to whale sharks in Mexico, the North American continent offers its fair share of impressive wildlife viewing.
January 12, 2022

Where to Spot All of North America’s Most Adorable (and Sometimes Dangerous!) Wildlife

From polar bears in Manitoba to whale sharks in Mexico, the North American continent offers its fair share of impressive wildlife viewing.
January 12, 2022