In the valleys of the Hindu Kush mountains, the Kalasha celebrated the winter solstice and the coming of their New Year.

Can you imagine during the time of COVID–when travel is hard and gatherings even harder–to be in a gorgeous place far away from it all, celebrating? For two weeks in December, the Kalasha, an ancient tribe of around 4,000 people who live in remote valleys of the Hindu Kush mountains of northwest Pakistan, joined together for Chaumos, their most important festival and last surviving Indo-European pagan tradition, to do just that.

The valleys had no recorded cases of COVID in the area, which allowed for the festival to go ahead.

The valleys are very hard to get to and remote. Difficult dirt roads into the area, combined with the faraway location keep most outsiders away, allowing for only a small number of people to enter. The valleys had no recorded cases of COVID in the area, which allowed for the festival to go ahead. Of course, that didn’t mean the Kalasha weren’t worried about the possibility of COVID coming into their environment, and some wore masks during this time.

The Kalasha women wore black dresses with striking embroidered colors. A long colorful tapestry head-dress was worn, decorated with cowrie shells and buttons. It’s one of the most striking and beautiful images of the people there.

The best way to experience Chaumos is to stay with a Kalasha family. They are very welcoming to foreigners and some local-run guesthouses will let you stay with them during this time, as long as you perform certain ceremonies with them.

All men and women, including any foreigners that stay with the Kalasha, must undergo purification rituals for the festival, especially for the three most sacred days called “ditch”, when sex is prohibited and no contact is allowed with any non-purified persons. Locally made wine is important, and not just for the merriment of drinking and dancing, but as it is considered the sacred drink of the spirits.

During the men’s purification, a virgin boy washed his hands in a sacred spring, or some wine, and sacrificed a goat, sprinkling the blood on the heads of those in attendance. At the same time, juniper branches were burnt to invoke and invite the spirit world. 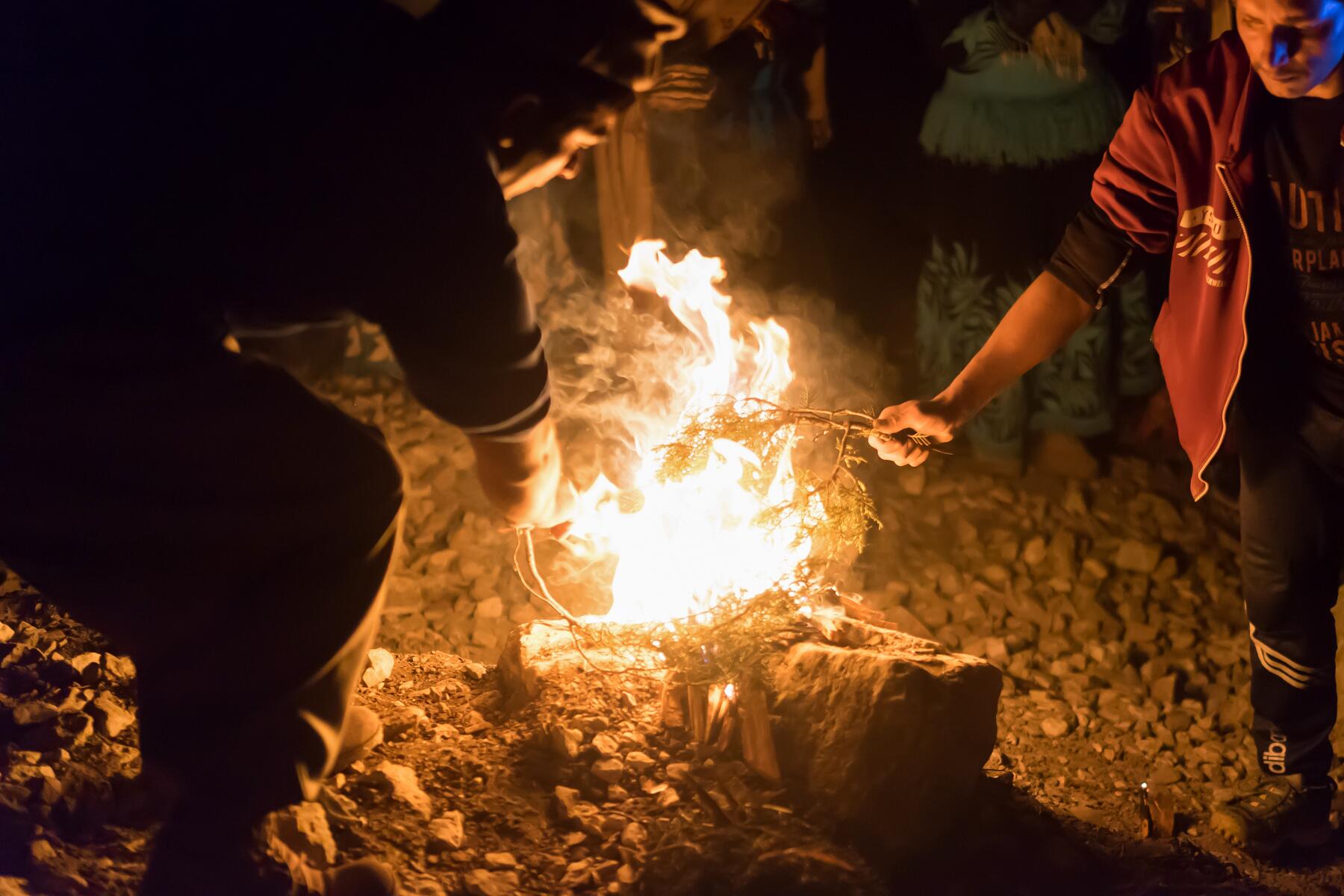 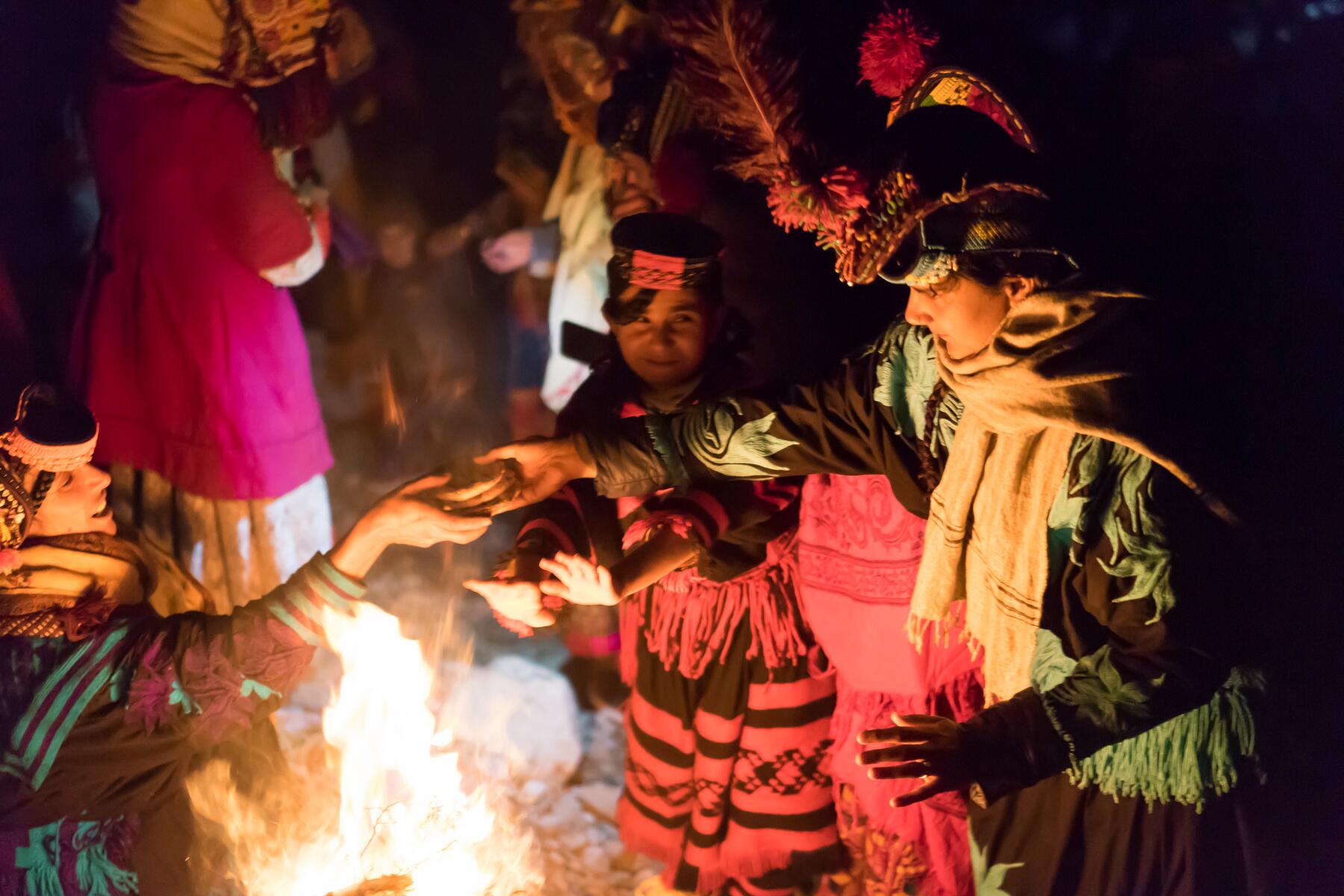 1. Juniper branches are burnt for purification ceremony.Jonny Duncan 2. Sacred bread being given to the women.

For the women’s ceremony, the men baked sacred bread that only the women are allowed to eat, which symbolizes the earth, grain, and fertility.

Food was shared in peoples’ homes between families and strangers alike. In one ritual, Sawelik Hari, baskets were made and filled with fruits and bread to give to close blood relatives.

Folk dances were held every day and each one was a prelude to specific rites that go on behind the scenes. All the dances were entertaining to watch and were one of the highlights of the festival.

In one dance, two groups from the same village competed with each other on how fast they could weave a basket together, taunting each other in the process with chants like: “You couldn’t make a basket in 100 years! Give up now and join us for a dance with our basket.”

The men and women sang songs and danced in their circles and on occasion the men joined with the women and they danced together.

The Jestak Han is the house of the female spirit of the hearth, called Jestak. Each clan has one in its respective village, and they’re for ceremonies such as the Feast of the Dead, where baskets are filled with food and brought inside. The food was arranged and a fire lit outside by the elder of the clan to call upon the ancestral spirits to come and dine. The Kalasha inside remained silent out of respect for the dead and once the fire outside was extinguished, the people shared the meal. 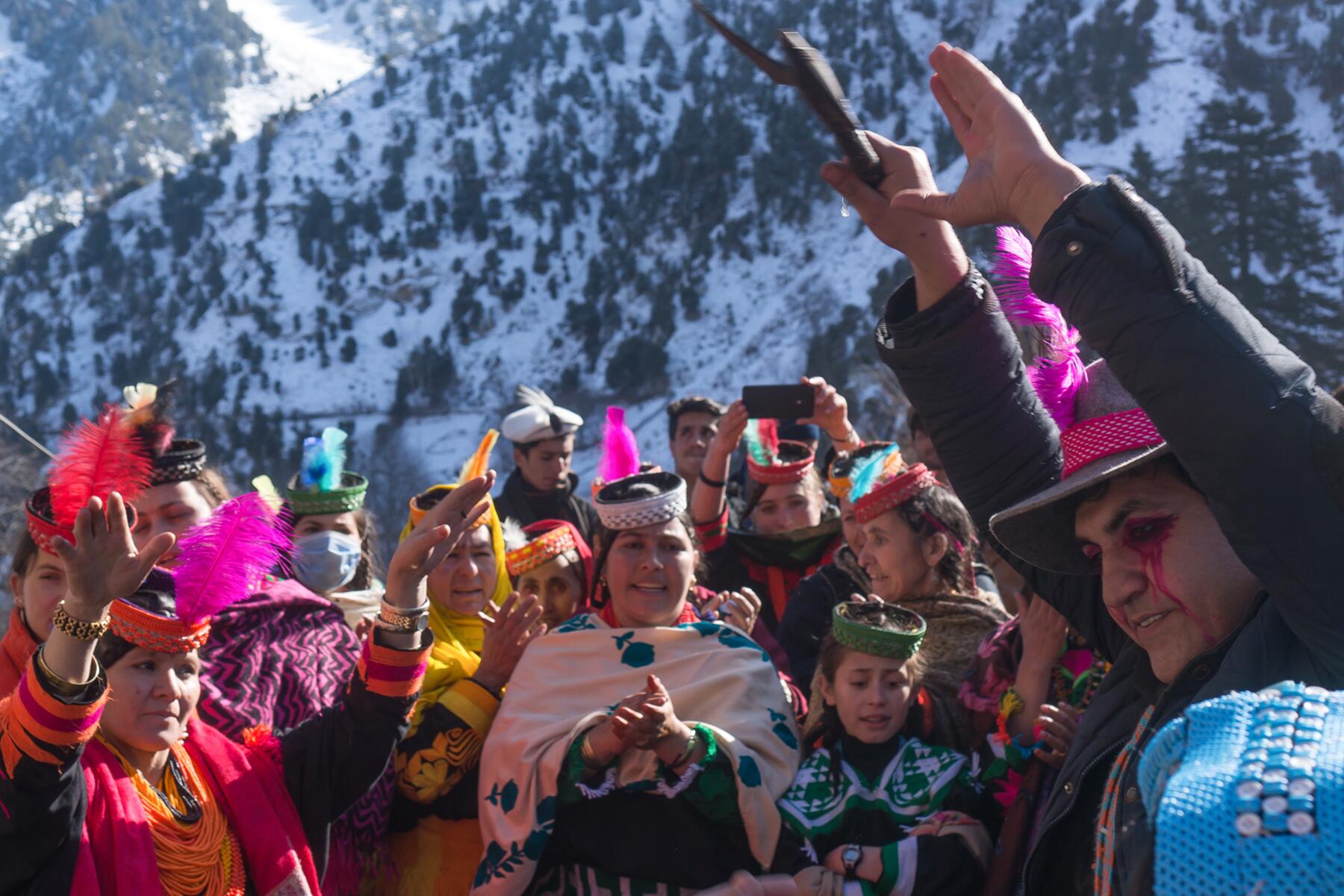 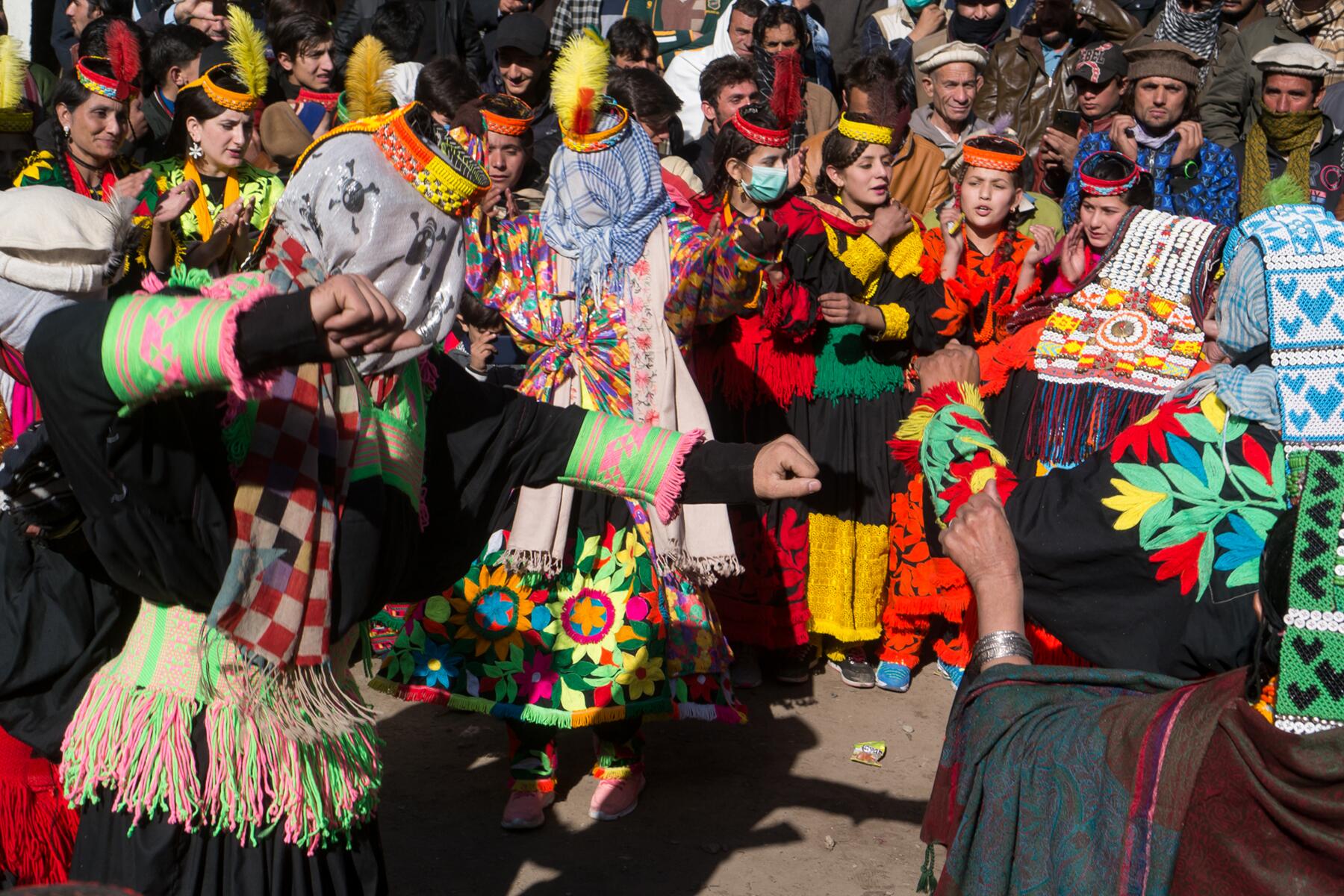 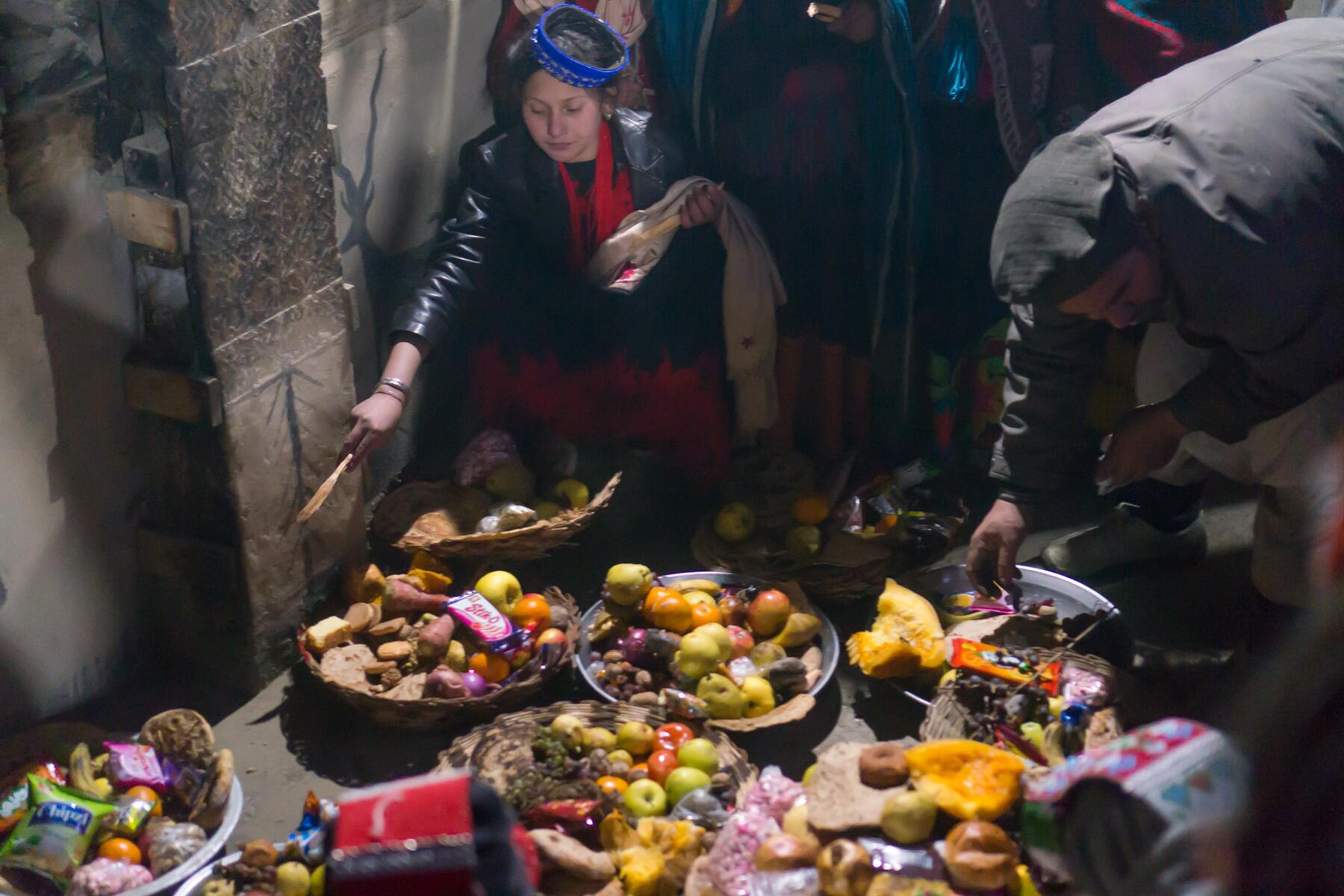 1. Men dance in women’s dresses with their faces covered.Jonny Duncan 2. Dancing is a must amongst the Kalasha.
3. Food for the dead and then eaten by the Kalasha.

In another ceremony in the Jestak house, children burned charcoal at night to use the next day to decorate the walls inside with paintings depicting animals of the valleys, especially wild mountain goats, which are considered sacred. Dough figurines were made in the night by family members and symbolized the creation of a future herd of mountain goats that are believed to turn into future life forms.

The night of Chanjjarat was one of the most spectacular sights to see during the whole festival. The men and women from the valleys lit bonfires in their respective areas before carrying fire torches to converge on particular villages where the men danced around a massive bonfire before hiking up to sacred shrines high up on the mountain. It is here they believe a mythical messenger, the highest spirit of the Kalasha called Balimain, arrives on a flying horse and takes the prayers of the Kalasha to the creator God, Dizau.

The women stayed behind by the fires singing traditional folk songs for the men on the mountain while dancing all night long, with the fires burning until the morning light brightened up the snow-covered valley. 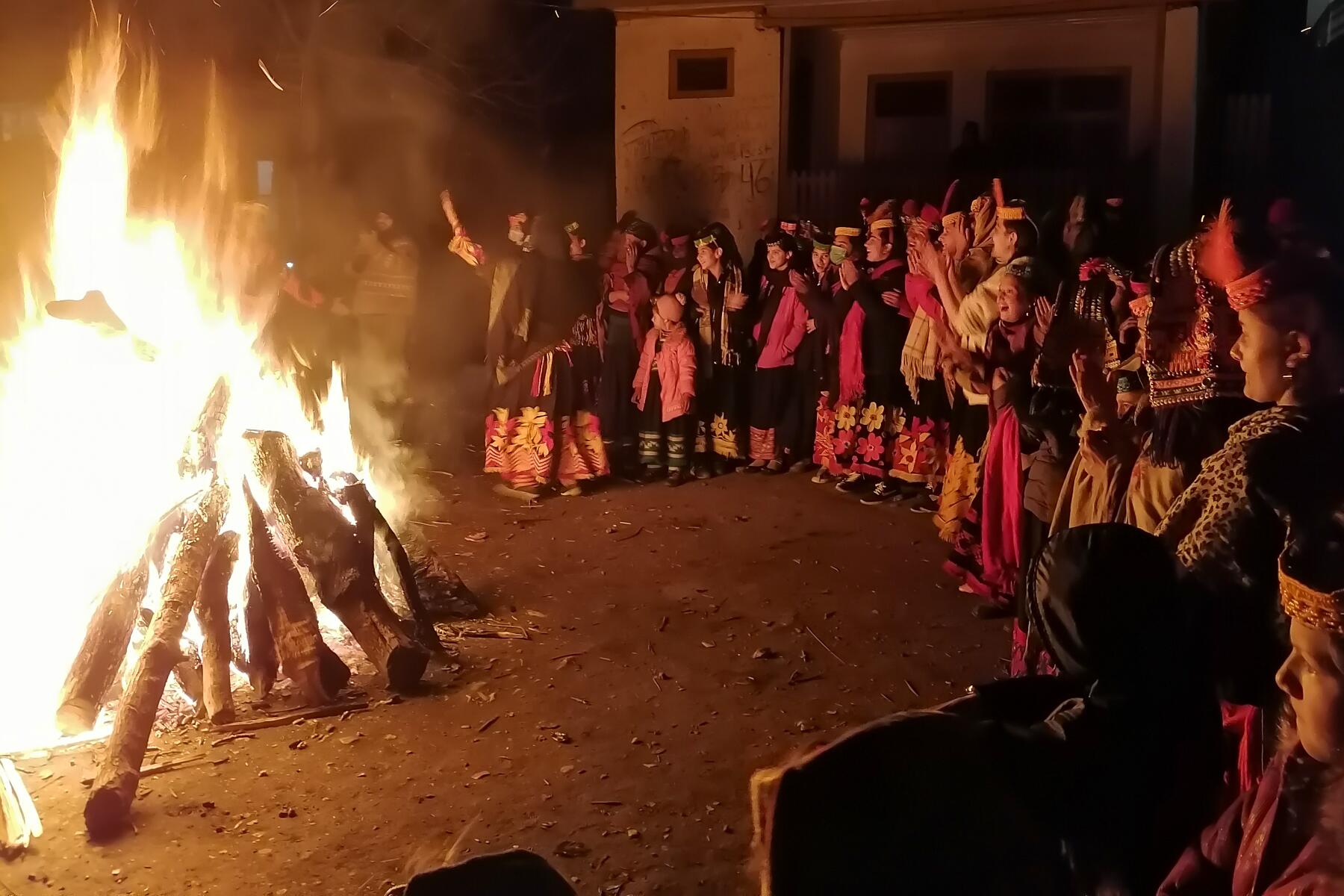 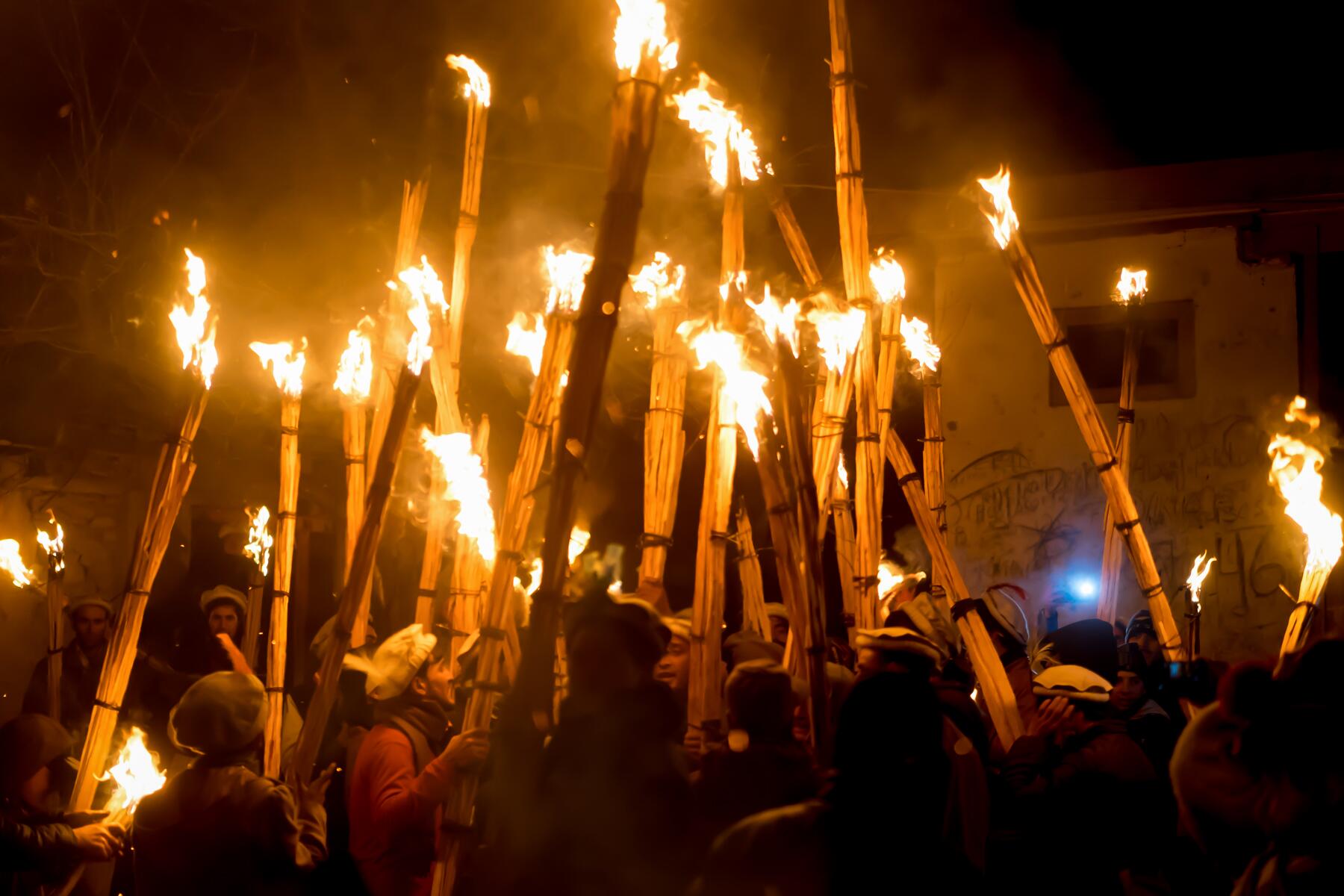 1. Women sing songs around a bonfire.Jonny Duncan 2. Men carry torches on the night of Chanjjarat.

The winter solstice is the last day and the Kalasha’s New Year. All the people gathered in one village where folk dances continued and, with some of the last of the wine drunk and spirits high, they danced long into the night.

The community feeling among the Kalasha is one of the strongest you can see anywhere in the world and their festivals are what could be described as a wonder of the world. They have a strong link with nature, having lived in the valleys completely self-sufficient, relying on the organic produce they harvest.

Taj Khan Kalash, a Kalasha Ph.D. student had this to say: “We want to be left alone and our natural environment unexploited. Kalasha culture is inseparable from mountain goats and subsistence lands. This sustainable Indigenous system of thousands of years is now being choked and replaced by an unsustainable cash economy, shops, and infrastructures for the tourism industry. If this goes on unchecked soon there will be no space left for the Kalasha culture to survive.”