While more and more cities are quickly realizing the benefits of implementing eco-friendly sustainable practices in preparation for the future, a few select cities are way ahead of the pack. Many of these cities have been honored with the European Green Capital (EGC) distinction which recognizes cutting edge solutions to reducing their environmental footprint. If you’re considering a European getaway to a city where biking everywhere is the norm, digging into organic food is promoted, and recycling every possible item is expected, consider the following eco-friendly options:

With its labyrinth of canals, townhouses, and narrow streets, biking around town has been an essential part of Amsterdam’s culture for decades. Of its roughly 750,000 residents, 75% of them own at least one bicycle, making it the most common mode of transportation within city limits. Join the throngs of cyclists and ride over to any of Amsterdam’s fine museums, like the stellar Van Gogh Museum centered in the Museum District (Museumplein). For more ideas, see Fodor’s guide to Amsterdam.

This modest English city (the ninth largest in the UK) may be an uncommon addition to this list, but its dedication to sustainable initiatives such as developing green park space makes it an eco-friendly city. Bristol has over 450 parks, which according to the EU, "is proportionately more than any other UK city." To fully appreciate the city’s lush green scenery, try a hot-air balloon ride (propane is more environmentally friendly that gasoline) that takes off from Ashton Court Mansion and soars high above Bristol, taking in its historic landmarks. You’ll float pass the famous Clifton Suspension Bridge and city waterways as well as the SS Great Britain, an 1800s steamship docked in the harbor. For more ideas, see Fodor’s guide to Bristol.

Known for its stunning architecture, much of which was designed by famed native son Antonio Gaudí, Barcelona’s efficient public network of trams, metro, funiculars, and cable cars limits the need to own a personal car. This, in turn, reduces overall carbon and greenhouse emissions. Get around like a local and catch the metro over to the Placa de la Sagrada Família stop to visit the awe-inspiring Temple Expiatori de la Sagrada Família, Gaudí’s most famous work of art. You can climb spiraling staircases up to its Gothic towers for a panoramic view of Barcelona’s many parks. For more ideas, see Fodor’s guide to Barcelona.

Few major cities can boast waters so clean that residents and visitors alike can dive in for a swim without bumping into floating trash and other filthy items. Copenhagen has ensured that select beaches remain clean enough for bathing and hopes to have all sea water within city limits meet the same standards by 2015. At the same time, the Danish capital happens to be a foodie-lover’s city and is at the forefront of the new Nordic cuisine that focuses on locally grown, organic, and seasonal ingredients. After a brisk swim (or maybe just a walk), head over to centrally-located Royal Cafe on Amagertorv 6, and try its open-faced sandwiches (smørrebrød), finishing off with a decadent Danish pastry. For more ideas, see Fodor’s guide to Copenhagen.

Germany’s second-largest city lies along the Elbe river and boasts a viable port that’s crucial to the country’s economy. Recognized as the 2011 European Green Capital for its innovative ways of accommodating its ever growing population and port, Hamburg’s expansion effectively reuses existing land and redirects maritime traffic to open up areas to additional housing and business development. Hamburg has also been able to keep its CO2 emissions down over the last few years, partly due to the local Port Authority’s strict environmental and air-quality regulations. If you’re in town on a Sunday, head over to the 300-year old Hamburg Fish Market to practice your haggling skills on vendors selling fresh produce and seafood alongside antiques and hand-me-downs (the perfect sustainable souvenir). For more ideas, see Fodor’s guide to Hamburg. 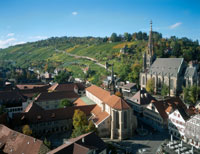 Thousands of tons of biodegradable waste are recycled in Münster to produce electricity, heat, and other energy forms for its 280,000 residents, who are very much accustomed to sorting their trash for recycling. Most of this culturally rich city’s historical buildings are clustered within the Altstadt (old town). Take a walk along tree-lined paths, strolling past landmarks such as the 13th-century St-Paulus Cathedral (the Dom) and 14th-century Rathaus (city hall). The walking paths—called the Promenade—circle the city and were constructed on the site of Münster’s old medieval walls, which date back to the late 1700s. For more ideas, see Fodor’s guide to Germany..

Touted as one of the most livable cities in Europe, Nantes’ location along the delta of the Loire, Erdre, and Sèvre rivers earned it the moniker "Venice of the West" and makes the city an attractive travel destination in Brittany. Looks aside, Nantes is the 2013 European Green Capital and one of the greenest cities in France. Its chief sustainable programs focus on using bicycles and electric tramways to reduce the number of cars in the city. Use public transportation to get to the legendary Brasserie La Cigale, where fresh seafood platters, steak tartare, and other local specialties including croissants and classic French pastries await. Its Art Nouveau–style decor—mosaics, tiles, ceramics, paintings—dates from the 1890s and adds ambiance to this iconic Nantes dining landmark. For more ideas, see Fodor’s guide to Nantes.

It wasn’t long ago that the Eyjafjallajökull volcano wreaked havoc on the entire aviation industry. Ironically, Iceland’s ingenious way of harnessing all the volcano’s geothermal activity is what makes the Scandinavian country such an eco-friendly place to visit. Blessed with the world’s largest and most-comprehensive geothermal heating system, Reykjavík’s everyday electricity and energy needs are satisfied with natural sources. No trip to Reykjavik is complete without a slow soak in its popular Blue Lagoon, a natural spa and mineral-rich hot spring that creates a relaxing and therapeutic way of experiencing Iceland’s geothermal power. For more ideas, see Fodor’s guide to Reyjavik.

Beating out 34 European cities to win the first European Commission Award in 2010 is Sweden’s picturesque capital, Stockholm. The city’s green initiatives—from purifying rain water to converting waste into biogas for its public transportation system—have earned this Scandinavian city recognition for its commitment to green living and sustainable development. Well on track towards eliminating its dependence on fossil fuels by 2050, Stockholm has reduced carbon emissions by 25% per person since 1990 and plans to ensure that 100% of vehicles operated within the city will run on renewable fuel by 2011. While in town, grab a rental bike and explore the lush island of Djurgarden, where many of the city’s major museums are found, such as Vasamuseet, Nordiska Museet, and historic open-air museum, Skansen. For more ideas, see Fodor’s guide to Stockholm.

Located within Northern Spain’s lush mountainous Basque region, the small city of Victoria-Gasteiz has mastered the art of co-existing with nature. The city is divided up into three distinct areas called "circles" in which the first ring is the city center, the second ring is degraded land that’s been turned into hectares of park space and greenery, and the third ring encompasses mountains and forests. What makes Vitoria-Gasteiz such a green destination, as recognized by the 2012 EGC award, is what it’s been actively doing within the second ring. In addition to reclaiming abandoned areas and converting them into rich, diverse ecosystems, the city monitors the growth and environmental impact of flowers, plants, and animals in various community gardens where residents and travelers alike can learn more about the region’s natural habitat. Vitoria-Gasteiz’s numerous vibrant parks are best explored by foot, so strap on comfortable walking shoes, grab your camera, and head out exploring. For more ideas, see Fodor’s guide to Vitoria-Gasteiz.