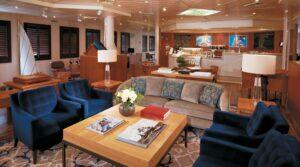 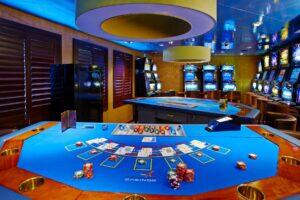 The larger of the three ships (which are otherwise identical) – a sail ship with nautical features and friendly service.Read More

Wind Surf, though it was acquired from Club Med, belongs in the Windstar fleet as much as her little siblings. She was designed by the same French architect, and for the most part appears to be a nearly identical copy of them, albeit simply of larger proportions. She is the only ship in the fleet to have actual suites which were created by reducing the number of staterooms employed by Windjammer from 386 to 312. Wind Surf is the only Windstar ship with elevators.

Those who enjoy informal attire at night, single open seating, and exemplary food and service will almost certainly revel in their experiences on these ships, which spend lots of time in ports inaccessible to bigger ships. Intimidated by the sails? Don’t be; they’re mostly just for show, though they may add three or four knots to the motorized speed if the wind is right. Given that the casino’s approximately the size of a large beach towel, and that there’s no glitzy entertainment in a main show lounge, many passengers happily head back to their comfortable cabins after dinner to phone room service for some popcorn with which to enjoy a movie.

Windstar has already completed the new initiative called Degrees of Difference on Wind Surf. Upgrades to dining, accommodations, service, destinations and activities were introduced in stages. Staterooms received upgraded soft goods, Shea Butter bathroom amenities from L’Occitane, flat screen TVs and DVD/CD players, and Bose SoundDocks for use with iPods, which can be borrowed at no charge from reception. Wireless connectivity in public areas is promised for all three ships.

With lots of dark wood paneling and blue fabrics, what the decor says, over and over again, is, “Nautical.”

Aside from the restaurant and a tiny lounge big enough for a combo and a small dance floor, there really isn’t much to do. Nighttime is great for sitting outside at the tiny bar and making new friends. These are some of the most congenial ships afloat and people do make friends quite easily.

The kitchen is small enough that everything arrives warm. The main courses and desserts are delectable – the salads and appetizers are a bit lacking in imagination. But the service is what it makes the most pleasing, as the staff is aware enough to quickly learn who on board has made acquaintances and seat them at the same tables. The outside barbecues are events, with big steel drums rolled out to barbecue shrimp, steaks and even lobster tails. Both the breakfast and lunch buffets are events. One can sit at a table and order eggs Benedict from the waiter, or the signature peanut butter French toast, and have it delivered warm to your table the second it is ready.

The cozy, wood-paneled main restaurant has plenty of tables for two and views of the sea. Single, open seating allows you to dine when and with whom you please, except that the maitre ‘d will select a table for you, and if you do not like the company it may be too late to say so. Invite your tablemates to join you before you arrive at his station, or tell him in advance if you prefer to dine alone. Breakfast and luncheon are also served in the Bistro, but the Veranda buffet is a cozy, glass-enclosed room serving table-service dinners and buffet at lunch is where you will want to be. There is an awning covered food station poolside with burgers, hot dogs.

Degrees is an alternative dining venue with no additional service charge. Make your reservations early as it does fill up quickly, By most accounts, there was not much actual advantage to the regular restaurant, except that the accent was more on steaks and chops. For most nights the main restaurant was just fine.

Even though the line is now owned by Ambassadors International, crew members will still come from the same Indonesian and Philippine sources as they did before. The mostly Dutch officers have sailed with Windstar for years; they’re especially delighted by the sight of repeat customers. There’s an unusual amount of fraternization between crew and passengers. At one time, passengers were allowed to walk into the bridge whenever you pleased, and the officer on board typically would give you a long lesson on charts and compasses. That privilege has been modified to the point where it is now best to seek permission to enter the bridge before you go there.

A hotel service charge of $11 per passenger per day is automatically added to your shipboard account. You are free to adjust this amount at the end of the cruise. A 15% bar service charge is added to all bar orders and dining room wine purchases.

Staterooms are large – a standard 180 sq. feet – and handsomely decorated. Standard amenities include two large portholes, TV/DVD and CD player, large closets, and a desk/vanity. Bathrooms have showers, hair dryers, and ample space for toiletries. There is 24-hour room service. But the suites are the best deal of all. Little more than two mirrored staterooms with half of the middle wall taken out, the result is surprisingly commodious. You have two of everything important; dressing areas, desks, even two bathrooms. These suites are some of the most comfortable staterooms ever made.

The fitness center is much more elaborate than on the smaller ships, with an extensive array of spa services like massage and aromatherapy, plus a sauna and steam room. There is also a spa with massage, facial, pedicure and other services offered. One can actually get “resort” scuba certification aboard the ship during the course of a one-week cruise in the onboard swimming pool. There are two hot tubs on main deck.

Windstar’s brochure calls for “casual elegance” in the evening, which means pants and skirts for women and polo shirts for men at night. Daytime clothing is strictly casual.

The best show in town is watching the ship leave port from the large aft deck. Almost the entire contingent gathers to watch and be watched by envious onlookers agape at the ship strutting her full sails. The Wind Surf lounge, featuring a small combo and dancing, may be pretty well deserted most nights. The Compass Rose piano bar is for sing-alongs. Heading to your cabin with a DVD from the library is the best bet.

Wind Surf‘s public areas are designed for comfort and feature wood finishes with sand and marine colors for a casual elegant look and feel. Fresh flower arrangements and sailing-related artwork are lovely touches shipwide. To make finding your way around simple, remember that all dining and entertainment areas are on the top three decks, with restaurants located forward and indoor-outdoor bars facing aft. The main lounge and casino are midship on Main Deck, as is the Yacht Club, which functions as library/Internet café/coffee bar. The fitness center is one deck higher. Most public areas have expansive sea views, although an exception is the spa, which is tucked away aft on Deck 2. Stairways are rather steep, but forward and aft elevators assure that moving about is relatively easy.

For years, Windstar Cruises’ fleet traditionally consisted of three majestic motor-sail yachts with billowing sails, but in 2015 the line doubled in size with a trio of 212-passenger luxury yachts. All of the upscale yachts often visit ports of call inaccessible to huge, traditional cruise ships and offer a unique perspective of any cruising region. Windstar’s sailing ships seldom depend on wind alone to sail, but if conditions are perfect, as they sometimes are, the complete silence of pure sailing is heavenly.

Whether on the sailing ships or megayachts, it doesn’t take long to read the daily schedule of activities on a typical Windstar cruise. Simply put, there are few scheduled activities. Diversions are for the most part social, laid-back, and impromptu. You can choose to take part in the short list of daily activities; borrow a book, game, or DVD from the library; or do nothing at all. There’s never pressure to join in or participate if you simply prefer relaxing.

Multimillion-dollar upgrades last took place in 2012, when each sailing ship was enhanced from bow to stern with chic decor that mimics the colors of the sky and sandy beaches. The Yacht Club is designed to be the social hub of the ship, with computer stations, a coffee bar, and an expansive feel. The yachts Windstar acquired in 2015 from Seabourn were substantially renovated before they entered the fleet. The all-suite accommodations, restaurants, pool deck, and public spaces were upgraded in the move.

Pros
Cons
Service is delivered with a smile by staff members who greet you by name virtually from the moment you board
All cabins are outside, and none have obstructed views
Teatime, when sweets are served in addition to finger foods, is an afternoon highlight
When the caviar spread is served one day during the cruise, you might have to fight fellow passengers to get near it
There are no private balconies on these ships
There are no tables in the standard staterooms, which makes dining from room service trays inelegant at best

Ocean-view staterooms are a study in efficiency and design. Closets are generous and have a safe; there’s also a flat-screen TV, DVD, and Bose SoundDock speakers. The combination vanity-desk and bedside table has drawers for ample storage. A few standard cabins have upper fold-down Pullman berths. Special touches are fresh flowers, terry robes and slippers, and toiletries. Teak-floor bathrooms are sensibly laid out and spacious enough for two people to share. All staterooms and suites are equipped with barware, minibar, and hair dryer. All voltage is 220, not 110.

Double the size of standard staterooms, suites were created from two standard cabins and have two bathrooms and a seating area with a sofa bed. A privacy curtain separates the bedroom from the sitting room. New spa suites include plush spa robes, tea service, and credits for certified organic spa services and fitness classes in WindSpa. Two supersize bridge suites have living and dining areas, a bedroom, a walk-in closet, and a bathroom with a whirlpool tub and separate shower.

No cabins are wheelchair accessible.

Nightly informational sessions regarding ports of call and activities are presented by the staff before dinner. Evening entertainment is informal and social, with a small dance combo playing in the main lounge and a duo in the Compass Rose. A crew show during each cruise is a delight, showcasing their homeland cultures. You may find occasional movies in the main lounge, which is outfitted with state-of-the-art video and sound equipment.

The Wind Spa, operated by Steiner Leisure, is surprisingly large for a ship this size, with an extensive menu of massages, facials, body wraps, and even teeth whitening. There is a couples massage room, but no thermal suite. However a coed sauna is complimentary.