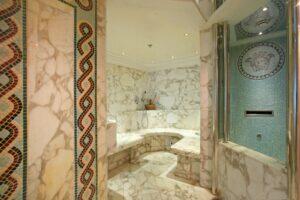 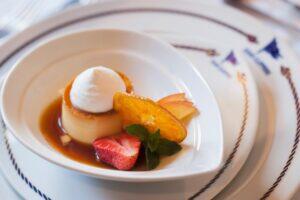 The exhilaration of being propelled by the elements; to call at lots of relatively untouristed ports.Read More

The ship speaks not of dollars, but of euros. A tip of 8 Euros per passenger per day is suggested – 5 for the wait staff pool, 3 for your cabin steward. Tips may be placed in a box at the purser’s office or added to your onboard account. A 12.5 percent tip is automatically added to bar bills.

The 114 cabins in eight categories attractively juxtapose wood paneling, off-white walls, marine blue carpeting, bedspreads with nautical flags, and brass fixtures, all of which combine to say: nautical. A hair dryer, safe and standard toiletries are supplied in all categories. Cabins are equipped with 220-volt outlets, plus a 110-volt shaver outlet. Bring a converter for use with U.S. appliances.

Each of the two 320-square foot Owner’s Suites has it own separate sitting area and free minibar. The 14 Deluxe verandah suites, the first on a sailing craft, measure 255 square feet. Two 175-square foot cabins behind the library have no designated balcony space, but the cabin doors do open onto the deck, and there’s a whirlpool tub/shower in the bathroom, as well as a minibar and bathrobes.

The spa, beauty salon and gym share the Captain Nemo Lounge’s underwater setting. The gym offers four treadmills, five exercycles (three types) and six weight machines. Spa treatments include a 60-minute relaxation or Thai massage, for 62 Euros. Use of the sauna is by appointment, and costs 3 Euros per day. The facilities are open from 8 a.m. to 8 p.m. Some passengers apparently believe that walking up and down stairs (there’s no passenger elevator) a couple of times a day is all the exercise they need.

Of the three fresh water pools on the teak Sun Deck, two are only knee-deep, and the water’s unheated. The third pool – the glass-bottom one above the dining room – is about four feet deep and just about big enough for a cooling dip.

On port days, a marina platform is sometimes lowered from the stern, and passengers frolic on and with a sunfish, a banana boat, water skis, windsurfs and kayaks. Snorkeling gear must be used at the beach, as swimming off the platform is forbidden.

The ship’s most unusual and exhilarating exercise is supervised mast-climbing, which takes place several times a cruise unless the weather’s dreadful. Those who don’t like heights can climb out in the bow netting while the ship is under sail.

There are no children’s programs, counsellors, or kid’s menus, and few youngsters sail aboard Royal Clipper. Neither cribs nor formula is available. Pregnant women in their third trimester are not allowed aboard.

Shorts and T-shirts are banned from the dining room at night, when men are encouraged to wear long-sleeved shirts for dinner, but most wear polo shirts, while their better halves favor slacks or casual dresses. At all other times, anyone seen in anything other than shorts and a T-shirt is frowned at censoriously.

The largest square-rigged sailing ship in the world, Royal Clipper offers a blend of older lines Windjammers’ ultra-casual and Windstar’s more upscale onboard atmosphere, and is popular with international passengers who find it exhilarating beyond their ability to describe the sight of 42 sails unfurling consecutively to symphonic accompaniment.

Royal Clipper has no elevator and no cabins designed for the handicapped. Except during trans-ocean crossings, there’s no doctor aboard, but only a nurse, who also waits tables.

The ship’s ever-lively epicentre is the Tropical Bar on Main Deck, presided over by a surly green parrot called Murphy. Evening entertainment is presented here, right on the teak deck. Next door, the Piano Bar, complete with a white baby grand, opens to the three-deck-high atrium, a rarity for a sailing ship. Aft of the Tropical Bar is the comfortable, air-conditioned library. There’s also a seldom-used Observation Lounge forward of the Deluxe balcony suites.

In the cool, quiet, under-used Captain Nemo Lounge, which shares space with the gym and spa, you can observe marine life through thick portholes while relaxing on a comfortable sofa. Despite the gym equipment, the brass, wood, and leather give the lounge a nautical flavor. There is no bar service.

Fill up at breakfast, a lavish, usually delicious buffet. At dinner, you may well find the food either a bit heavy, or inexpertly prepared, or both. There are frequent on-deck barbecues at lunchtime.

The Clipper Dining Room is the ship’s most beautiful room. The central ceiling, three decks overhead, is actually the glass bottom of one of the dipping pools. Tables of assorted shapes and sizes seat two, four, six or eight.

Breakfast and lunch are served buffet style, with an omelet station in the morning and a fresh pasta or stir-fry for lunch. Dinners are a la carte, with open seating; as there are commonly multiple nationalities aboard, be certain to ask to be seated with English-speakers – assuming, of course, that you’re neither reclusive nor misanthropic. The dishes on the menu are displayed each evening in the Piano Bar, allowing you to see what you’re getting yourself into. Room service is offered only to guests in the two Owners and 14 Deluxe Suites.

Service is best described as friendly, as crew members often do double duty as waiters, nurse, and whatever else may be required. Meals are the times when you get to talk to them the most as they wait on your table and visit at the same time. Very much a “family” kind of atmosphere.

Want traditional cruise line production numbers? Sail with someone else. Here you’ll make do with crab races, passenger talent shows, and local guest performers in the Tropical or Piano Bar. Most passengers agree that the best show onboard is sailaway.

Royal Clipper spends the winter season sailing weekly from Bridgetown, Barbados on itineraries that include the Grenadines and Windward Islands of the Caribbean. After repositioning to Europe in the spring, she sails a variety of summer voyages ranging from Spain to Croatia in the Mediterranean and North Africa.

Royal Clipper is the first five-masted, full-rigged sailing ship built since 1902. As the largest true sailing clipper ship in the world today, she carries 42 sails with a total area of 56,000 square feet.

Unusual for a sailing ship, a three-deck atrium graces the heart of the vessel.

Her interior is decorated in Edwardian-era style with abundant gleaming wood, brass fixtures, and nautical touches. Light filters into the piano bar, three-deck-high atrium, and dining room through the glass bottom and portholes of the main swimming pool located overhead.

The rarely used Observation Lounge is forward of the Deluxe suites and affords great sea views. It is also the location of the computer station for all Internet access.

In 1991, Star Clippers unveiled a new tall-ship alternative to sophisticated travelers whose desires include having an adventure at sea but not on board a conventional cruise ship. Star Clippers vessels are four- and five-masted sailing beauties—the world’s largest barkentine and full-rigged sailing ships. Filled with modern, high-tech equipment as well as the amenities of private yachts, the ships rely on sail power while at sea unless conditions require the assistance of the engines. Minimal heeling, usually less than 6%, is achieved through judicious control of the sails.

A boyhood dream became a cruise-line reality when Swedish entrepreneur Mikael Krafft launched his fleet of authentic recreations of classic 19th-century clipper ships. The day officially begins when the captain holds an informative daily briefing on deck with a bit of storytelling tossed in.

The lack of rigid scheduling is one of Star Clippers’ most appealing attractions. The bridge is always open, and passengers are welcome to peer over the captain’s shoulder as he plots the ship’s course. Crew members are happy to demonstrate how to splice a line, reef a sail, or tie a proper knot.

As attractive as the ships’ interiors are, the focal point of Star Clippers cruises is the outdoors. Plan to spend a lot of time on deck soaking in the sun, sea, and sky. It doesn’t get any better than that. Consider also that each ship has at least two swimming pools. Granted, they are tiny, but they are a refreshing feature uncommon on true sailing ships and all but the most lavish yachts.

As the haunting strains of Vangelis’s symphony “1492: Conquest of Paradise” are piped over the PA system and the first of the sails is unfurled, the only thing you’ll hear on deck is the sound of the music and the calls of the line handlers until every sail is in place. While the feeling of the wind powering large ships through the water is spine-tingling, you will miss the wondrous sight of your ship under sail unless the captain can schedule a photo opportunity utilizing one of the tenders. It’s one of the most memorable sights you’ll see if this opportunity avails itself. However, when necessary, the ships will cruise under motor power to meet the requirements of their itineraries.

Pros
Cons
The feeling of the wind moving this large vessel through the water is spine-tingling
You won’t miss the glorious sight of Royal Clipper underway when the captain schedules a photo op via the tenders
The library is a cozy place to read and offers a good selection of books
In Category 3 cabins near the bow, you’ll notice a definite slant to the floor
You may also feel a bit more motion forward than aft, and be aware that creaking sounds are common on sailing ships
Tall passengers will find it difficult to use the treadmills in the low-ceilinged gym

Think yacht, and the cabin sizes make sense. Although efficiently laid out with tasteful, seagoing appointments and prints of clipper ships and sailing yachts on the walls, cabins are small in comparison to most cruise ships. All have a TV, safe, vanity-desk, small settee, hair dryer, and marble bathroom with standard toiletries. Closet space is compact, and bureau drawers are narrow, but an under-the-bed drawer is a useful nautical touch for extra storage. Cabins have 220-volt electrical outlets and a 110-volt outlet suitable only for electric shavers. For 110-volt appliances, you’ll need to bring a transformer; for dual-voltage appliances, pack a plug converter.

None of the staterooms are designed for wheelchair accessibility, nor are there any elevators.

The multilevel dining room serves a single open seating buffet-style breakfast and lunch. Dinner in the dining room is seated and served European style. For early risers, a Continental breakfast with coffee, fruit, and pastries is set up in the piano bar; specialty coffees are available at the bar for a charge. A buffet lunch is offered most days on deck in the Tropical Bar, as are late-afternoon snacks and predinner canapés. On select itineraries an outdoor luncheon barbecue is prepared one day ashore. Room service is available only to occupants of the Owner’s and Deluxe suites and passengers who are ill and unable to make it to the dining room.

There is no lavish entertainment, but there are entertaining ways to pass the evenings, starting with the raising of the sails. Performers come aboard in certain ports to provide an authentic taste of local music and arts, but with the exception of live music in the piano bar and for dancing on deck, fun largely takes place outside at the Tropical Bar. Expect crab races, wacky games, and a Talent Night starring crew members and passengers.

The tiny spa offers an array of reasonably priced, no-nonsense massages and body treatments, but a large steam room is an unexpected bonus.