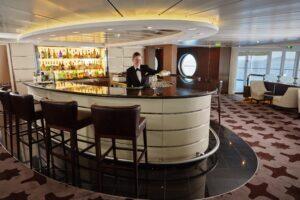 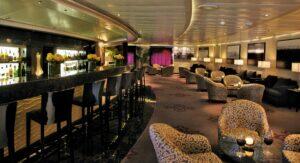 Even more inclusive than in the past, the line has maintained its traditional tried-and-true formula—delightful ships offering exquisite service, generous staterooms with abundant amenities, a variety of dining options, and superior lecture and enrichment programs. Guests are greeted with champagne on boarding and find an all-inclusive beverage policy that offers not only soft drinks and bottled water, but also cocktails and select wines at all bars and restaurants throughout the ships. Round-trip air, ground transfers, and shore excursions in every port are included in the cruise fare.

On board, casinos are more akin to Monaco than Las Vegas. All ships display tasteful and varied art collections, including pieces that are for sale.

1
All-Inclusive.Regent Seven Seas Cruises offers the longest list of inclusive features for the money.
2
Destination Focused.Regent even includes select shore excursions in the fare—a real bonus when the ships reach ports of call.
3
Fine Cuisine.Ships in the Regent fleet have some of the finest specialty restaurants afloat and there is no charge for dining in them.
4
Great Service.Exemplary service is a signature feature of Regent’s voyages.
5
Luxurious but Informal.Socializing is easygoing on Regent’s less formal ships.

Choose this Line If
Don’t Choose this Line If
You want to learn the secrets of cooking like a Cordon Bleu chef (for a charge, of course).
You don’t want the hassle of signing bar tabs or extra expense of shore excursions.
A really high-end spa experience is on your agenda.
Connecting cabins are a must. Very few are available, and only the priciest cabins connect.
You can’t imagine a cruise without the hoopla of games in the pool; these ships are much more discreet.
You don’t want to dress up for dinner. Most passengers still dress more formally than on other lines.

What to Expect on Board

Menus may appear to include the usual beef Wellington and Maine lobster, but in the hands of Regent Seven Seas chefs the results are some of the most outstanding meals at sea.

Specialty dining varies within the fleet, but Seven Seas Voyager and Seven Seas Mariner, have the edge with the sophisticated Signatures, featuring the most authentic French cuisine to be found outside of Paris. Prime 7, on all three ships, is a contemporary adaptation of the classic American steak house offering fresh, distinctive decor and an innovative menu of the finest prime-aged steak and chops, along with fresh seafood and poultry specialties. In addition, Mediterranean-influenced bistro dinners that need no reservations are served in Sette Mari at La Veranda, the venue that is the daytime casual Lido buffet restaurant.

Wine Connoisseurs Dinners are offered occasionally on longer cruises to bring together people with an interest in wine and food. Each course on the degustation menu is complemented by a wine pairing. The cost varies according to the special vintage wines that are included.

Room-service menus are fairly extensive, and you can also order directly from the restaurant menus during regular serving hours.

Although special dietary requirements should be relayed to the cruise line before sailing, general considerations such as vegetarian, low-salt, or low-cholesterol food requests can be satisfied on board the ships simply by speaking with the dining room staff. Wines chosen to complement dinner menus are freely poured each evening.

Most sailings host guest lecturers, including historians, anthropologists, naturalists, and diplomats, and there are often discussions and workshops.

Spotlight cruises center around popular pastimes and themes, such as food and wine, photography, history, archaeology, literature, performing arts, design and cultures, active exploration and wellness, antiques, jewelry and shopping, the environment, and marine life. All passengers have access to these unique experiences on board and on shore.

Activities and entertainment are tailored for each of the line’s distinctive ships with the tastes of sophisticated passengers in mind. Don’t expect napkin-folding demonstrations or nonstop action. Production revues, cabaret acts, concert-style piano performances, solo performers, and comedians may be featured in show lounges, with combos playing for listening and dancing in lounges and bars throughout the ships.

Although gyms and exercise areas are well equipped, these are not large ships, so the facilities also tend to be limited in size.

Each ship has a jogging track, and the larger ones feature a variety of sports courts. The spas and salons aboard Regent Seven Seas ships are operated by Canyon Ranch SpaClub, which offers an array of customizable treatments and services.

Other luxury lines don’t always include round-trip air, ground transfers, and unlimited shore excursions in every port of call.
Regent Seven Seas ships offer all-suite accommodations.
Regent Choice Shore Excursions carry a supplement, but they delve much deeper into a region’s culture and history.
Multinight pre- and postcruise land programs are available to extend your cruise vacation.
Regent Seven Seas ships are luxurious but not stuffy, and there’s a “block party” on every cruise where passengers are invited to meet their neighbors in adjacent suites.

Elegant casual is the dress code for most nights; formal and semiformal attire is optional on sailings of 16 nights or longer, but it’s no longer required. It’s requested that dress codes be observed in public areas after 6 pm.

Regent Seven Seas’ vessels are adult-oriented and do not have dedicated children’s facilities. However, a Club Mariner youth program for children ages 5 to 8, 9 to 12, and 13 to 17 is offered on select sailings, both during summer months and during school holiday periods. Supervised by counselors, the organized, educational activities focus on nature and the heritage of the ship’s destinations. Activities, including games, craft projects, movies, and food fun, are organized to ensure that every child has a memorable experience. Teens are encouraged to help counselors select the activities they prefer. Only infants that are one year of age before the first day of the cruise may sail.

The efforts of a polished, unobtrusive staff go almost unnoticed, yet special requests are handled with ease. Butlers provide an additional layer of personal service to guests in the top-category suites.

Gratuities are included in the fare, and none are expected. To show their appreciation, passengers may elect to make a contribution to a crew welfare fund that benefits the ship’s staff.

Membership in the Seven Seas Society is automatic on completion of a Regent Seven Seas cruise. Members receive discounted cruise fare savings on select sailings, exclusive shipboard and shore-side special events on select sailings, a Seven Seas Society recognition cocktail party on every sailing, and Inspirations newsletter highlighting special events, sailings, and destination- and travel-related information. The tiered program offers rewards based on the number of nights you have sailed with RSSC. The more you sail, the more you accrue. Bronze benefits are offered to members with 4 to 20 nights. From 21 through 74 nights, Silver members also receive complimentary Internet access on board, free pressing, and an hour of free phone time. From 75 through 199 nights, Gold members are awarded priority disembarkation at some ports, an additional two hours of complimentary phone time, more complimentary pressing, an exclusive Gold & Platinum activity aboard or ashore on every sailing, and priority reservations at restaurants and spas. From 200 through 399, Platinum members can add complimentary air deviation services (one time per sailing), nine hours of complimentary phone use, and unlimited free pressing and laundry services. Titanium members who have sailed 400 or more nights also get free dry-cleaning and free transfers.